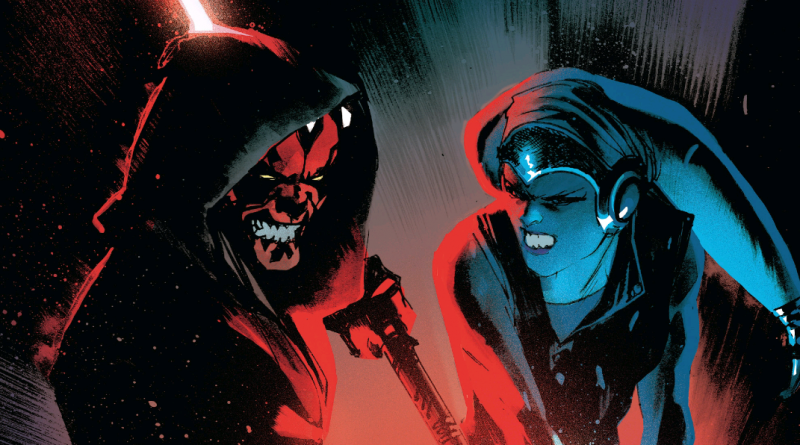 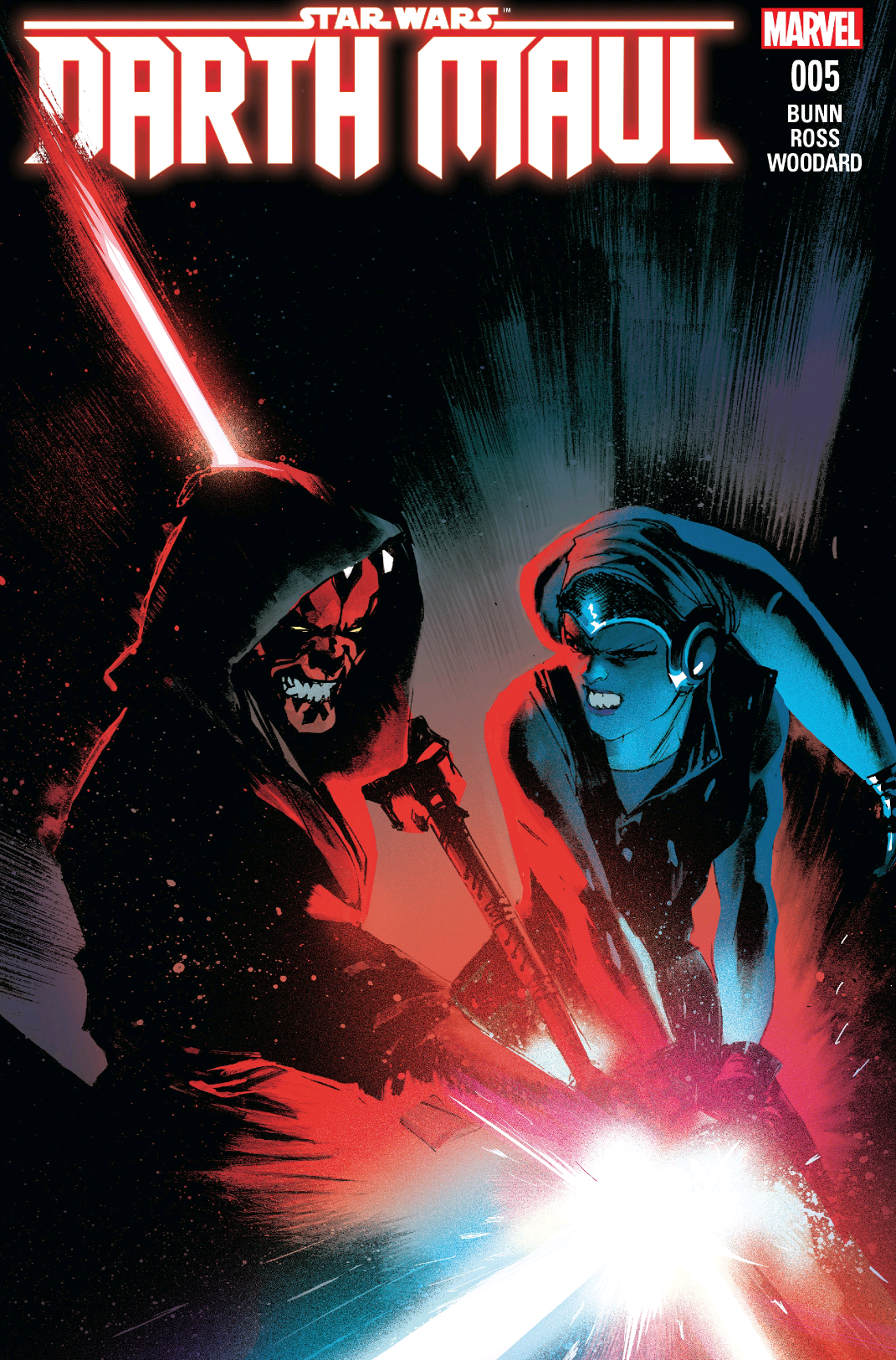 This week marks the conclusion of Cullen Bunn’s 5-Part Star Wars: Darth Maul mini-series with artist Luke Ross. Read on for the full review. Spoilers ahead…

Hungry for action and thirsty for Jedi blood, Darth Maul went behind Sidious’ back, against his specific instructions to lay low, gaining entry to a black market auction where a kidnapped Jedi Padawan is being sold to the highest bidder. 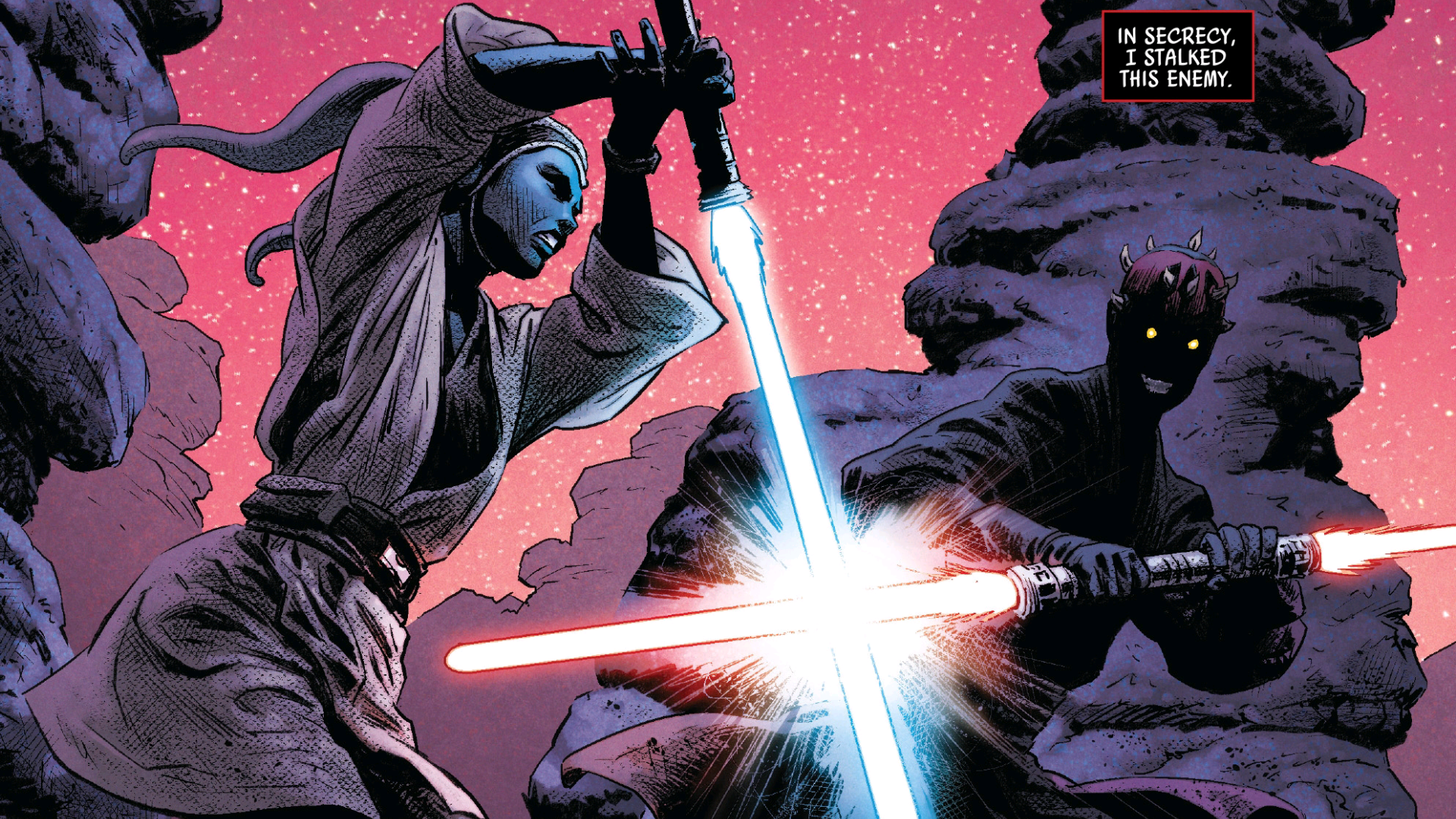 After rescuing the Padawan with the help of a group of hired bounty hunters including Cad Bane and Aurra Sing, Maul planned to satiate his bloodlust by challenging the Padawan in a lightsaber duel. 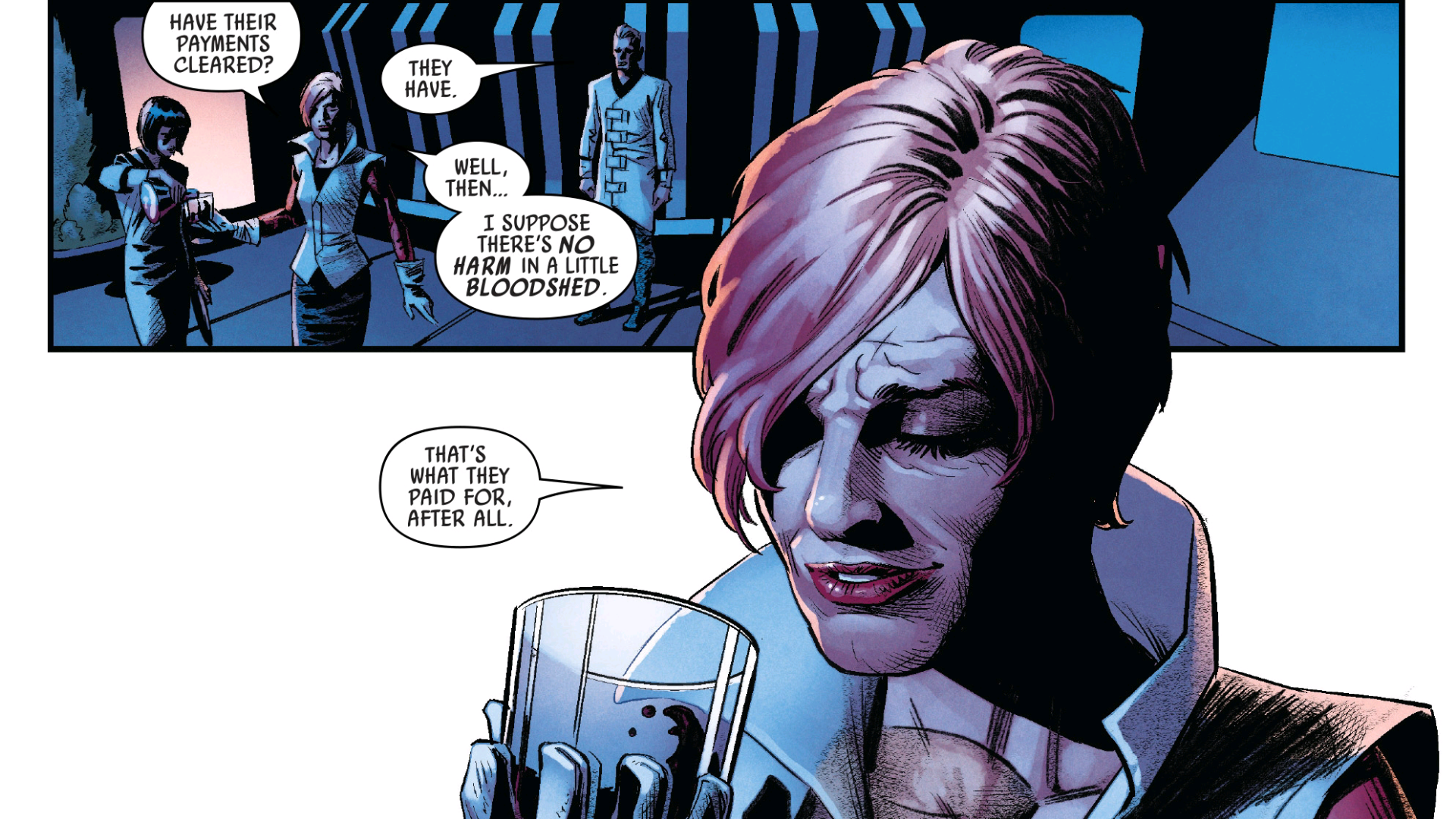 However, before he could execute his plan, crime boss Xev Xrexus, who set up the auction, had their ship shot down to the surface of the moon of Drazkel below her installation.

In the last issue, Maul and the Twi’lek Padawan Eldra Kaitis fought together against the onslaught of thugs and crime lords that had joined the hunt to capture the escaped Padawan, while Bane and the others search for transport off of the moon. After defeating their attackers, Maul decided that the time was right to make his claim on the Jedi’s life, and the fight began. 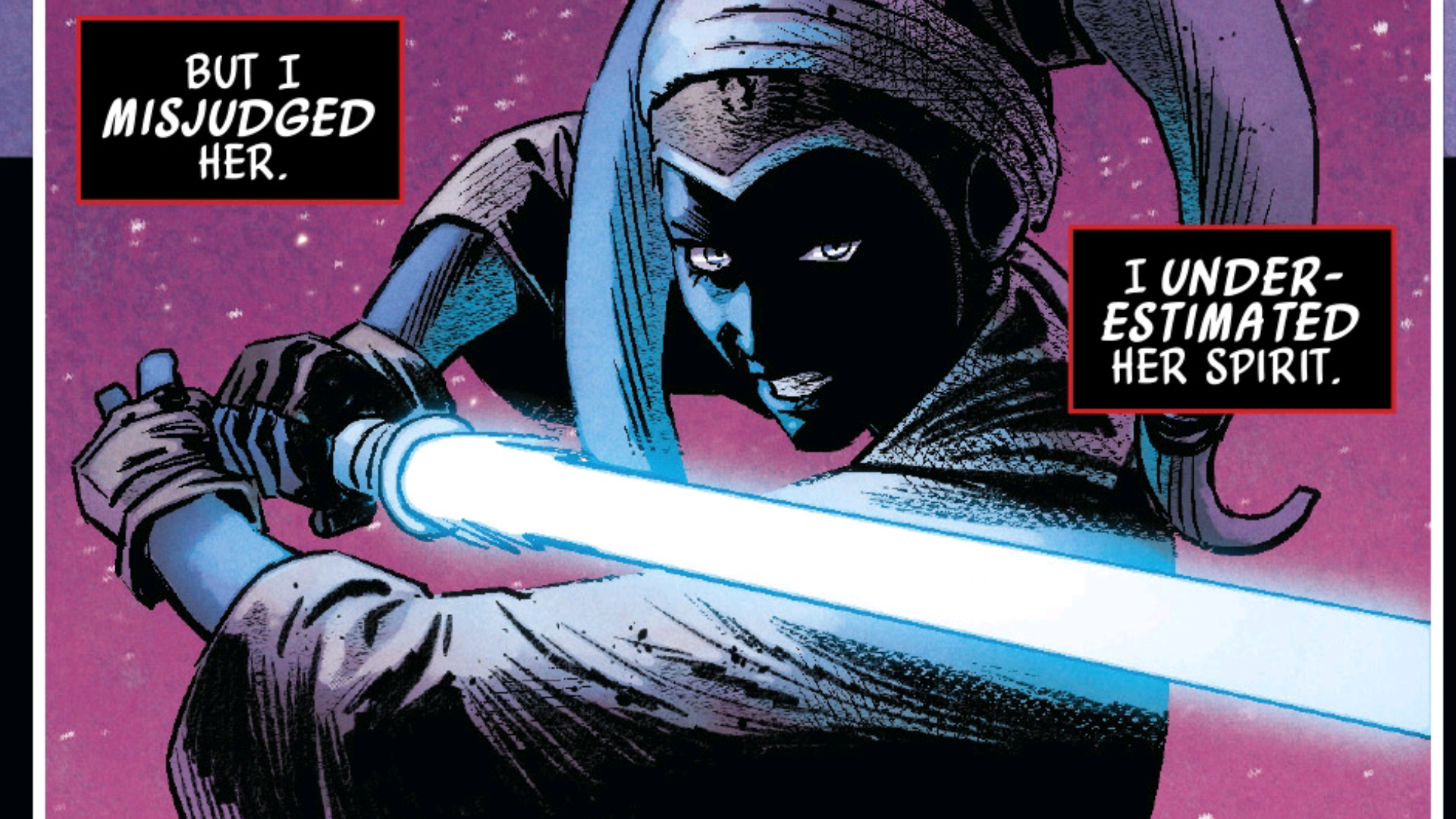 The final issue of this very entertaining mini-series picks up here, with Maul discovering that Eldra is very much his equal, despite his previous claims of superiority. He is constantly surprised by her tenacity, and even entertains the thought of turning her to the dark side. However, in the end, his lust for revenge against the Jedi and the fear of his master finding out about his actions wins out as he succeeds in defeating his foe. 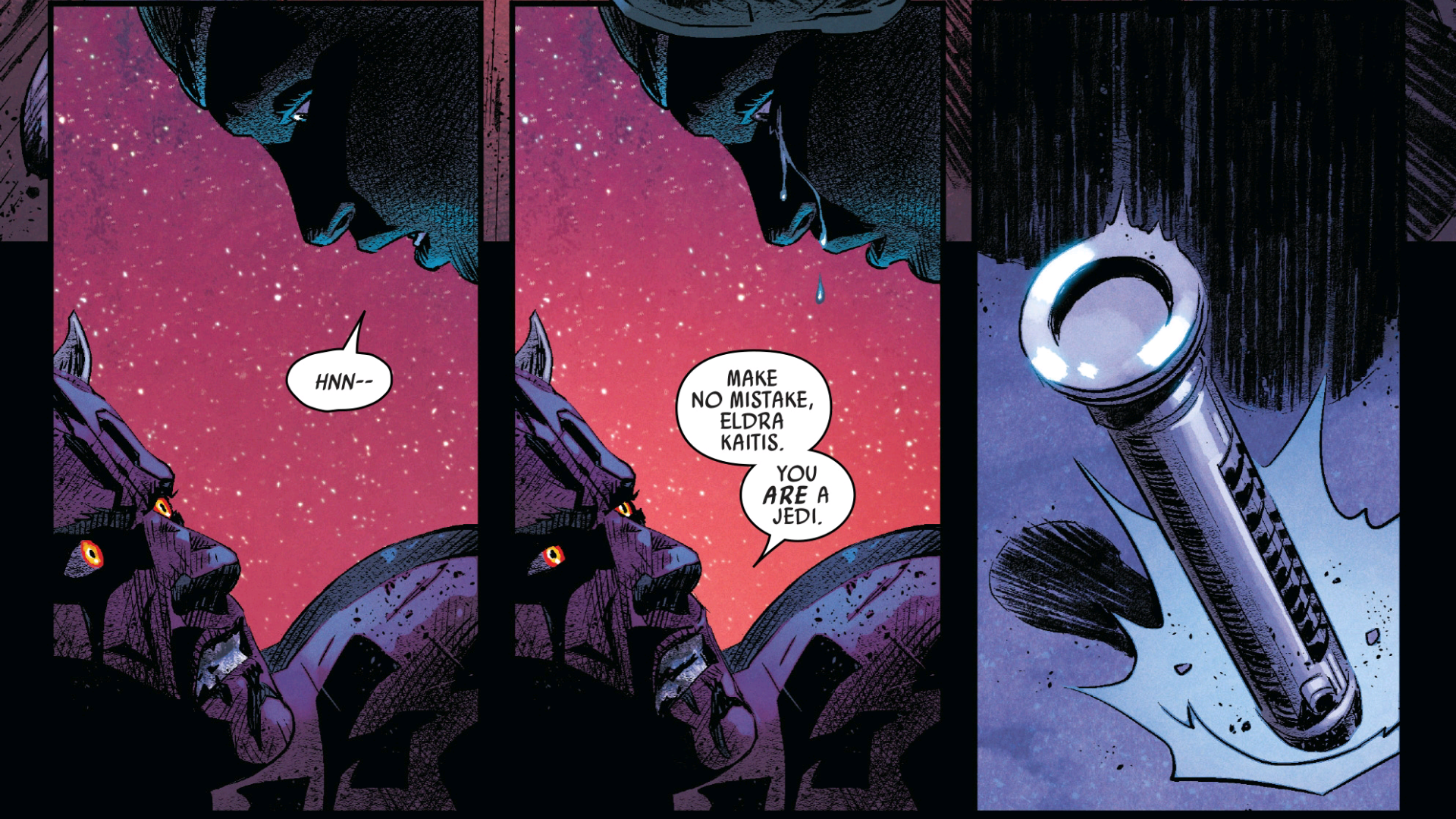 As the tears flow from her eyes at the end of Maul’s crimson blade, Maul declares her a formidable opponent and silently hopes that all Jedi can prove as much of a challenge as the Padawan. 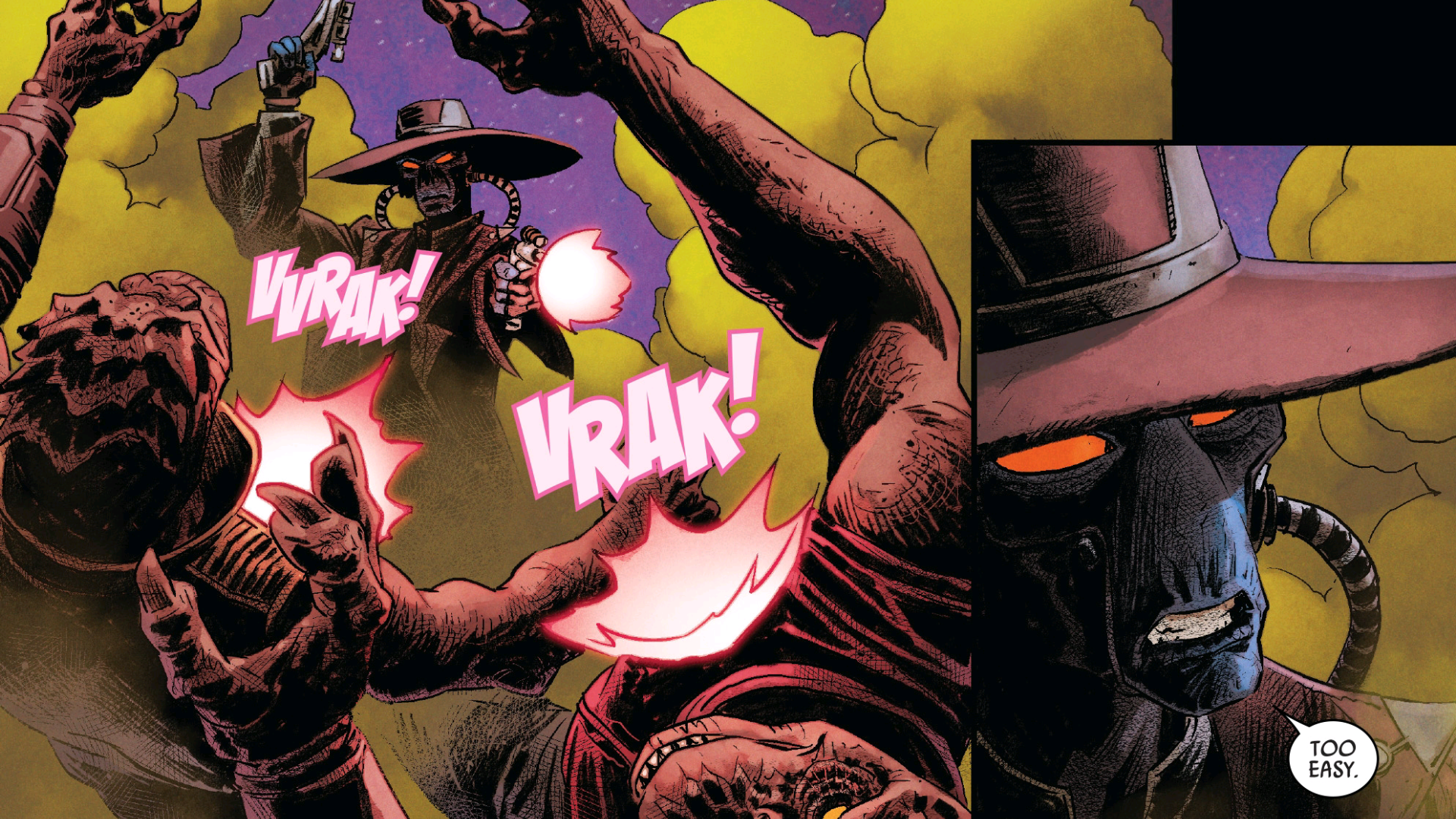 The bounty hunters acquire a stolen ship from one of the hunting parties and look for Maul. However, Maul has to make one more stop before returning to Coruscant and providing payment to the bounty hunters. 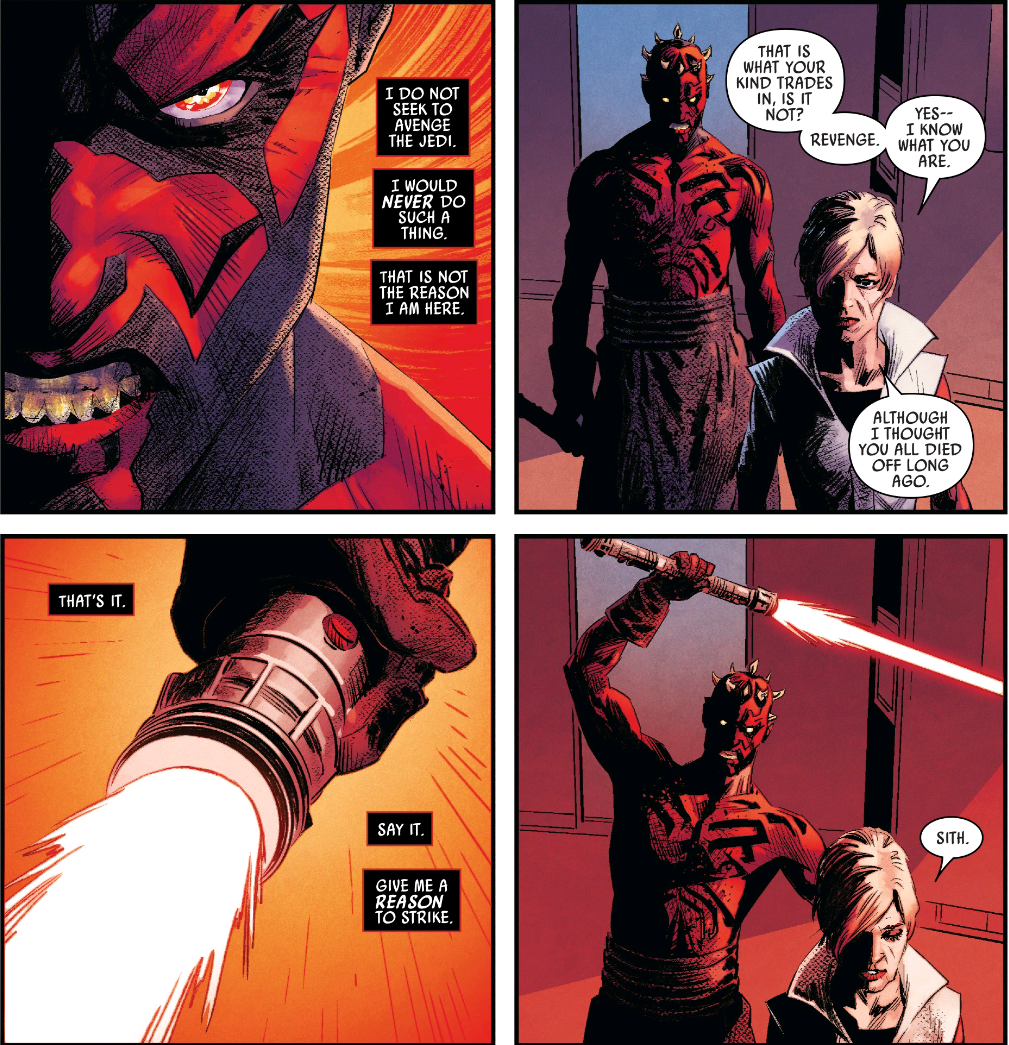 As Maul approaches Xrexus, she attempts to barter for her life, but Maul is not interested in money – only revenge. She makes her final mistake when she affirms that she suspects what he truly is. She meets her end with the word “Sith” being the last syllable she would ever utter. 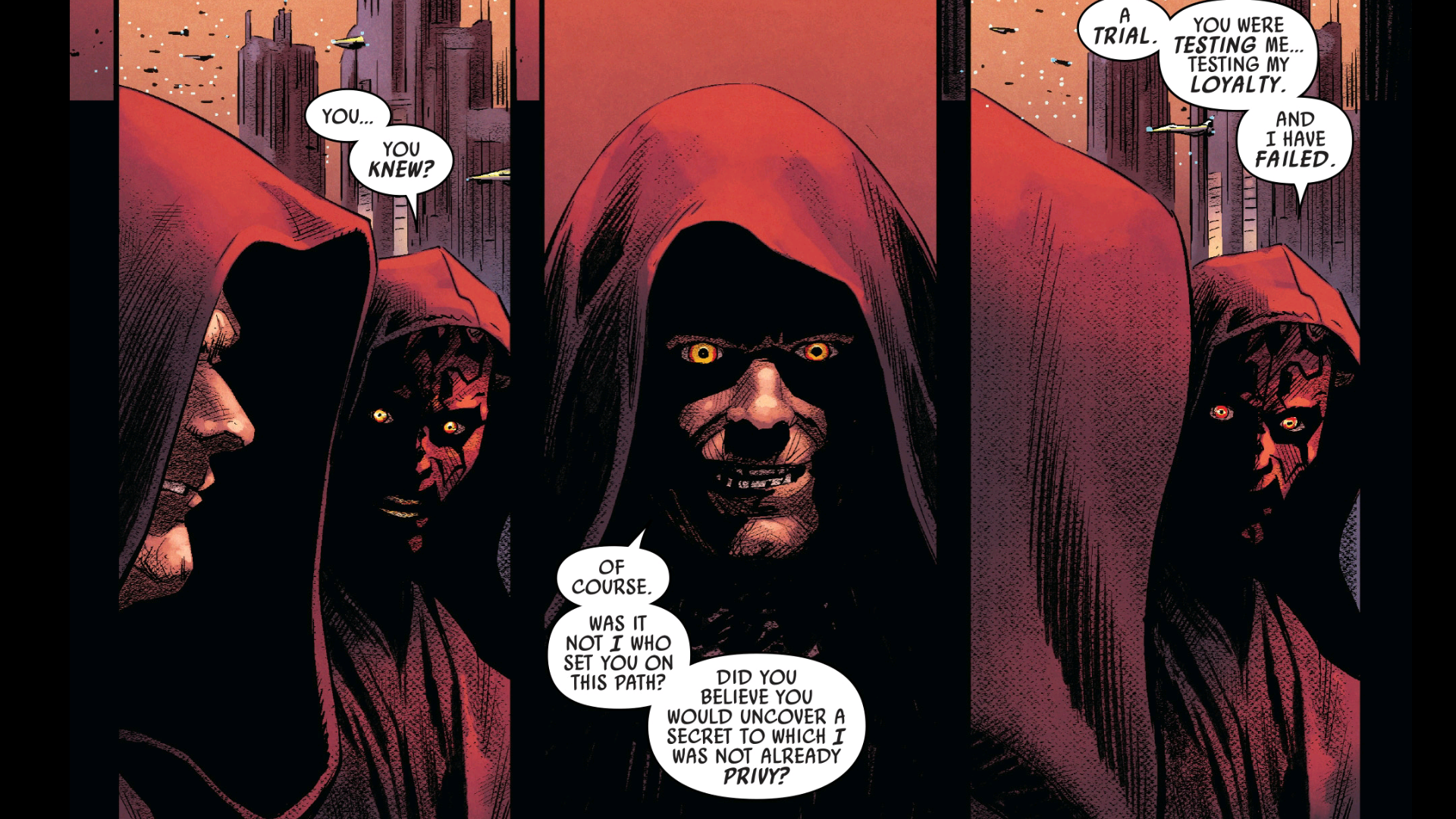 After arriving on Coruscant, Maul meets with Sidious, who reveals that he knew of Mauls actions all along. Sidious allowed Maul to proceed with his plan as a test – a test that Maul passed with flying colors, proving that he has fully embraced the ways of the Sith. 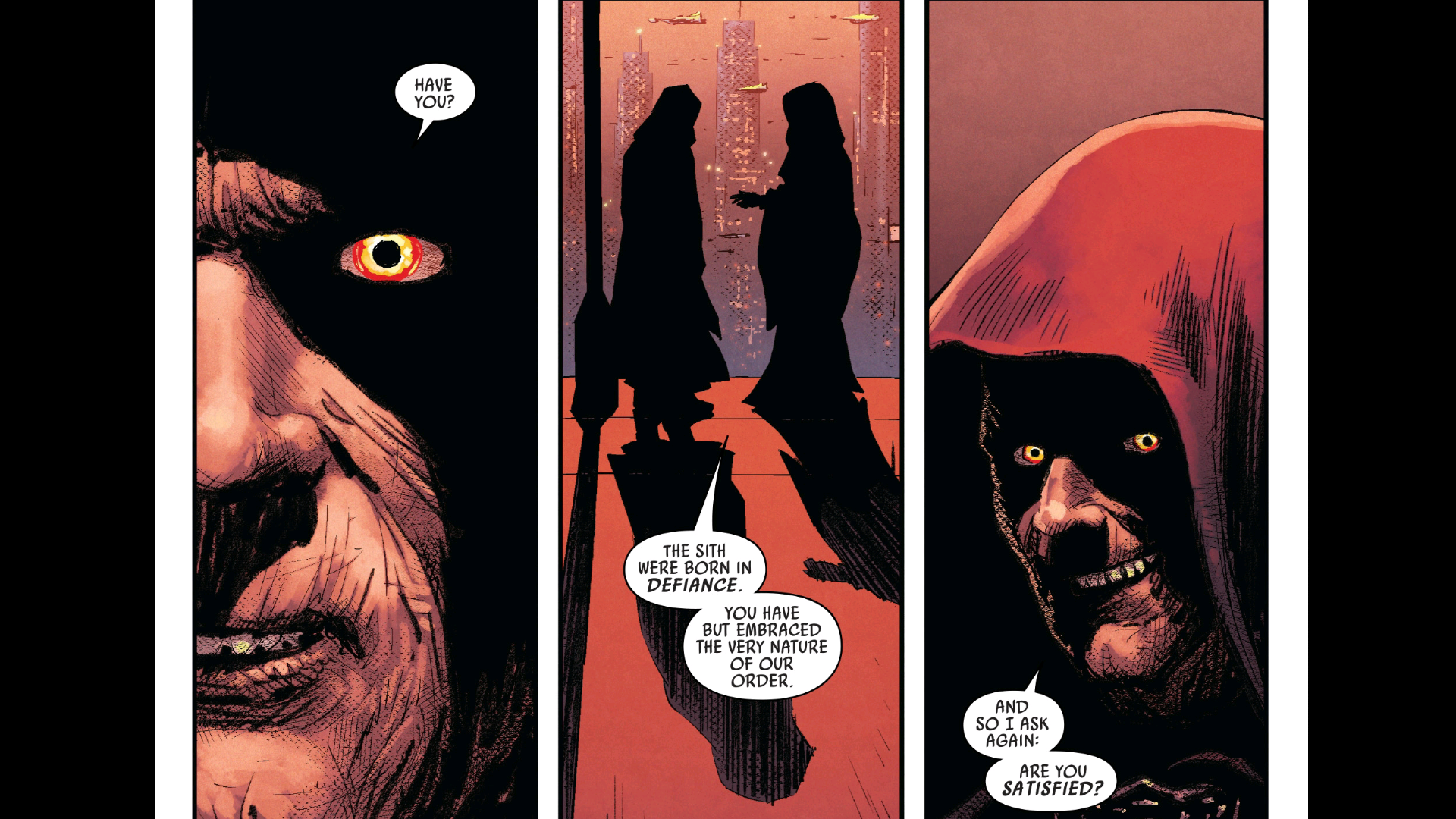 Sidious asks Maul if he is satisfied after killing the Padawan, but Maul reveals that killing the Jedi only served to intenstify his rage. In fact, instead of providing him fulfillment, her death only left him more empty, a true testament to the overall arc of his character. 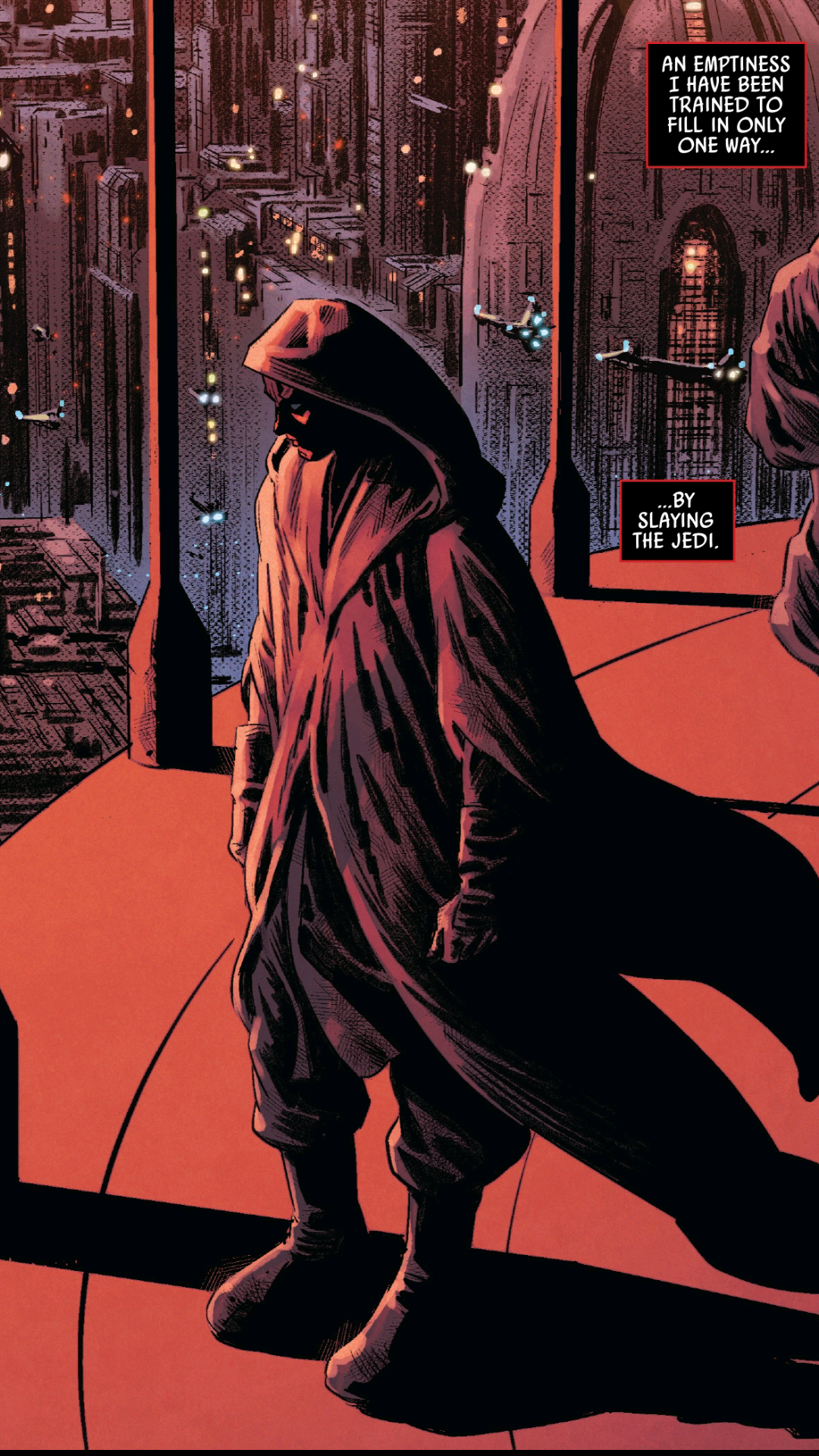 I really enjoyed this series as a whole. It was very well executed, both in terms of Bunn’s story and Ross’ beautiful artwork. The pacing of the story was excellent and the conclusion, although not unexpected, made sense in regards to the story and Maul’s character arc across the saga.

Did you ever hear the tragedy of Darth Maul? This is a question that I imagine future Sith lords will be asking their apprentices in the decades ahead. Maul’s story is definitely a tragedy. Kidnapped from his mother as a small child, bottle fed on hatred and rage, crafted by his master to serve one purpose. A purpose that only left him wanting more and feeling more empty with each passing day. Cut in half by Obi-Wan Kenobi. Betrayed by his master who abandoned him and left him for dead. Reuniting with his brother only to see him murdered by his former master. 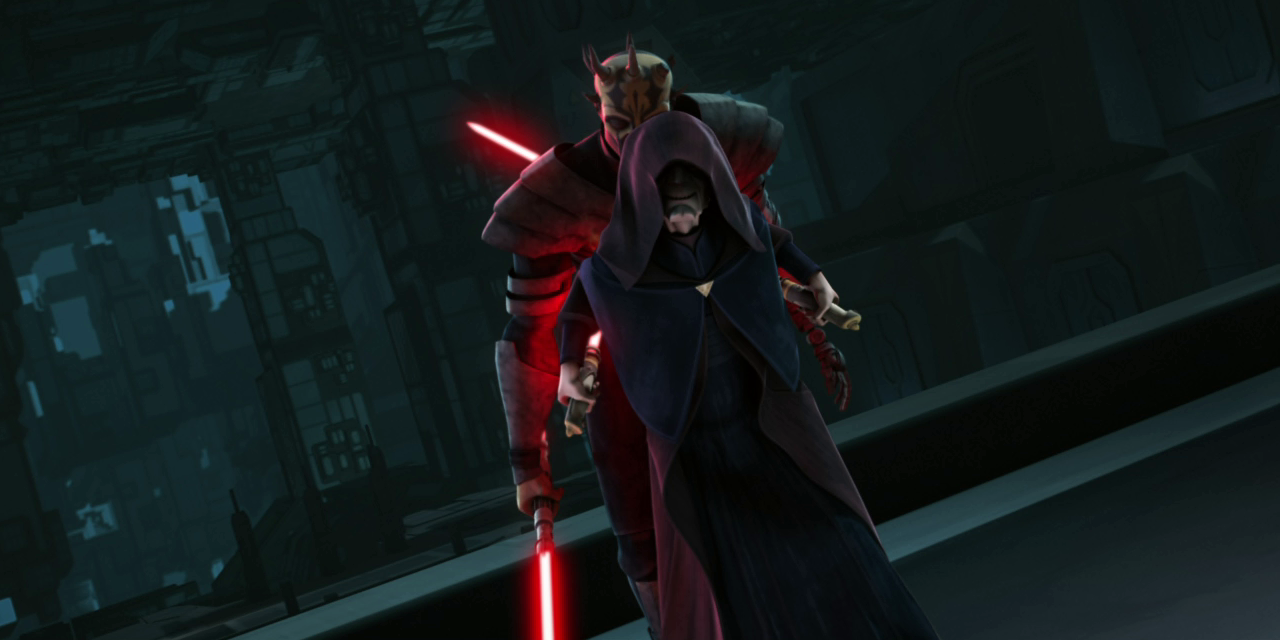 Maul never really knew satisfaction in all of his sad life. Eventually, as fans of Star Wars: Rebels know, he would find his way to Tatooine in his search for Kenobi, still, after all these years obsessed with revenge. After being mercifully cut down in an instant by Kenobi, Maul’s last words were (speaking of the Chosen One) “He will avenge us” as he died in the arms of his greatest opponent. 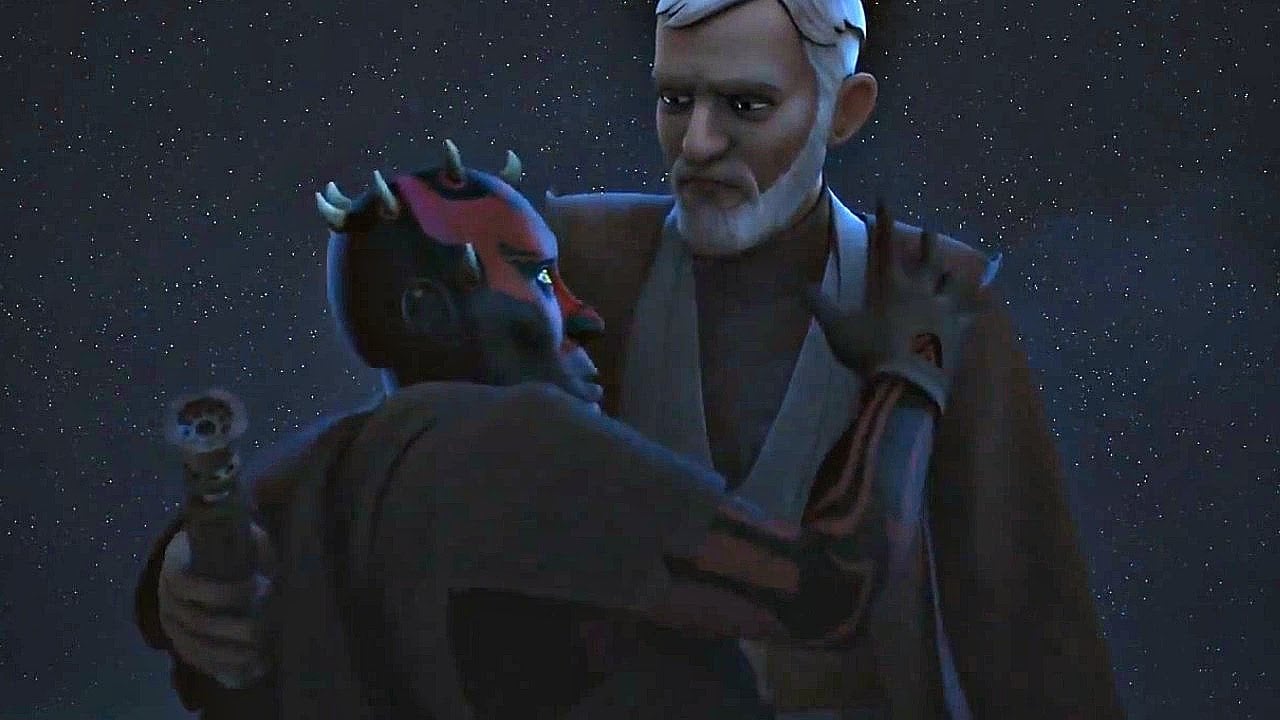 Maul never learned. He never grew as a character – not in any positive sense anyway. He only grew in his darkness and obsession over the years. The tragedy of Darth Maul is a terrifying picture of what happens when people are unwilling to let go of old grudges. When we are unwilling to forgive and forget. This comic series, although very entertaining, is sad in a way – as it showed us that from the very onset of Maul’s career as a dark side warrior – he was doomed to live a life where he never really lived at all.

Maul may never have found the satisfaction he longed for, but Darth Maul #5 puts a nice bow on a pretty solid mini-series, providing a satisfying conclusion and cementing Maul as one of the most tragic characters in all of Star Wars.

Darth Maul #5 is available in your local comic shop and digitally on Comixology. Until next time, happy reading comic fans! 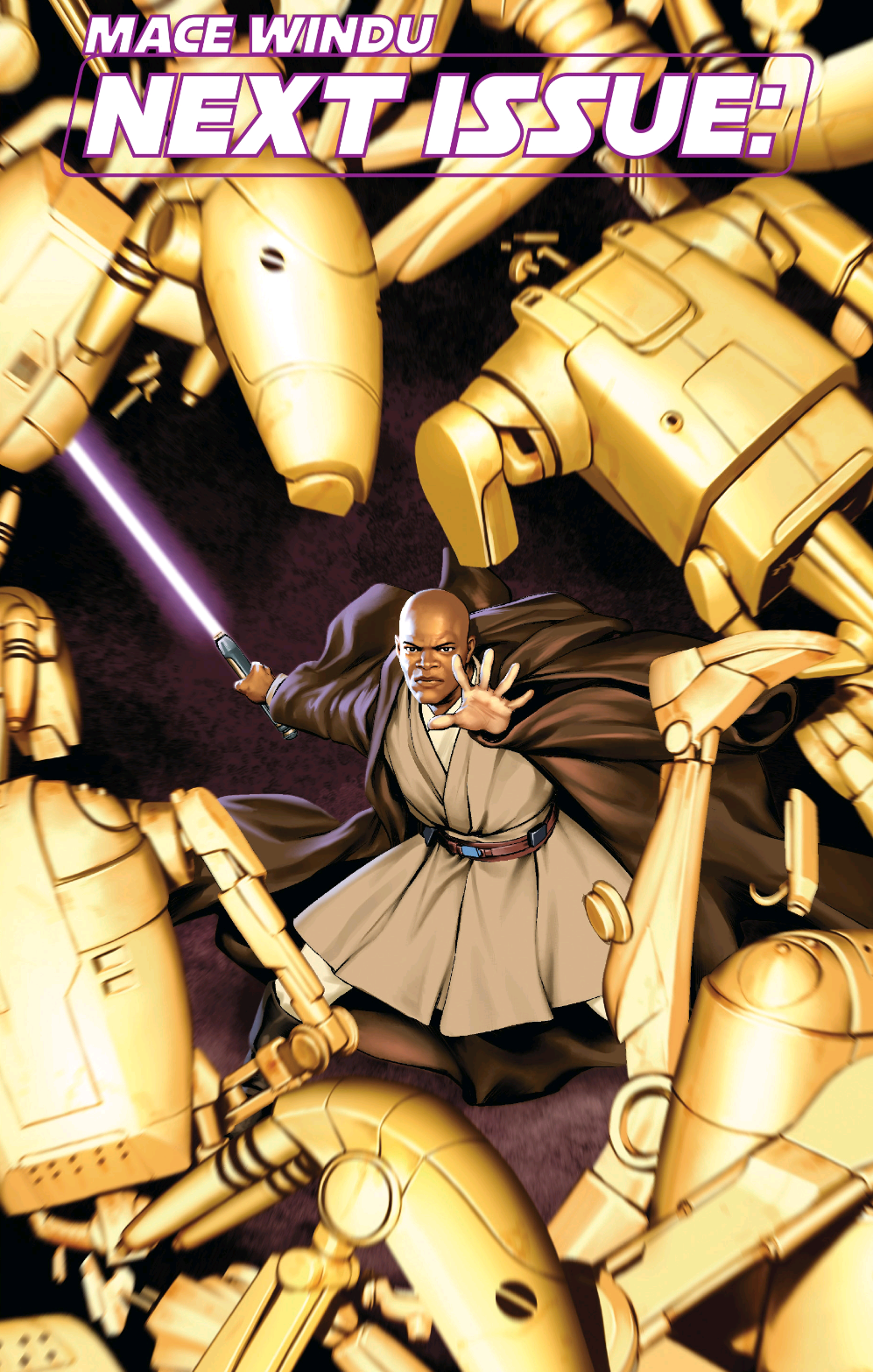 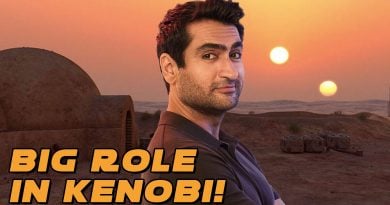 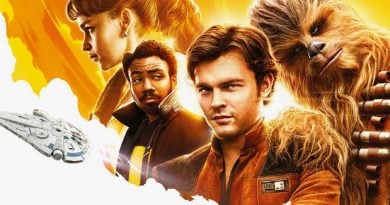 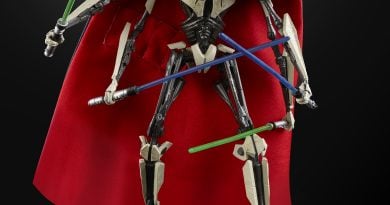 5 thoughts on “Maul Can’t Get No Satisfaction in Marvel’s Final Issue of Darth Maul!”