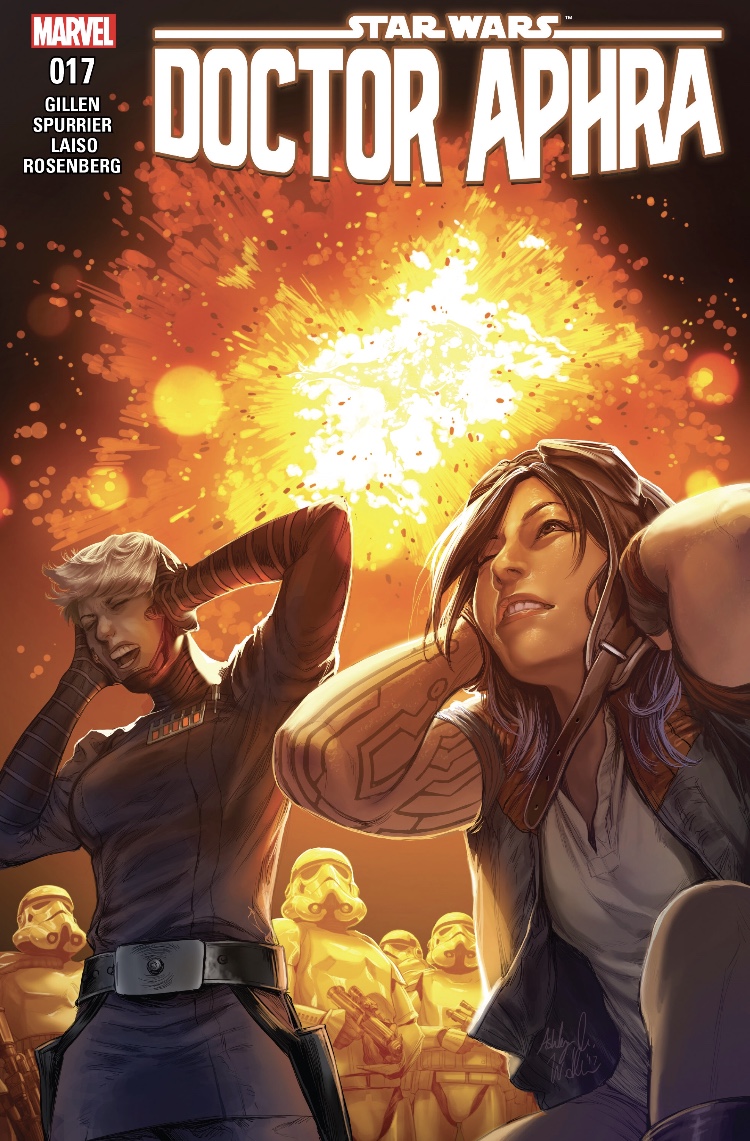 If you’re a Rebels fan and still recovering from that emotional, one-two gut punch we were dealt this past Monday, fear not, General Hera Syndulla has arrived in Doctor Aphra. Technically, this is not Hera’s first appearance in the Marvel comics, as she and the Ghost crew popped up in the excellent Kanan: The Last Padawan series. However, this is General Syndulla, and she’s about to get swept up in the antics of Doctor Aphra herself. SPOILERS AHEAD….

This issue opens above an old Trade Federation ship that’s been converted into a Rebel flight school. A rather shaky pilot is finishing up his training flight and his instructor is not pleased. Perhaps “shaky” is generous on my part, as the pilot has a full-on meltdown when he thinks he may be near death. His instructor ends the training flight orders him to go to medical and check if they have any backbone to offer him. I love the visuals and concept of the Rebellion conscripting an abandoned Trade Federation ship as a sort of mobile training center for their pilots. That’s a story I’ve always wanted told– how the Rebels train their pilots and soldiers– and it’s nice to get a glimpse here, at least. 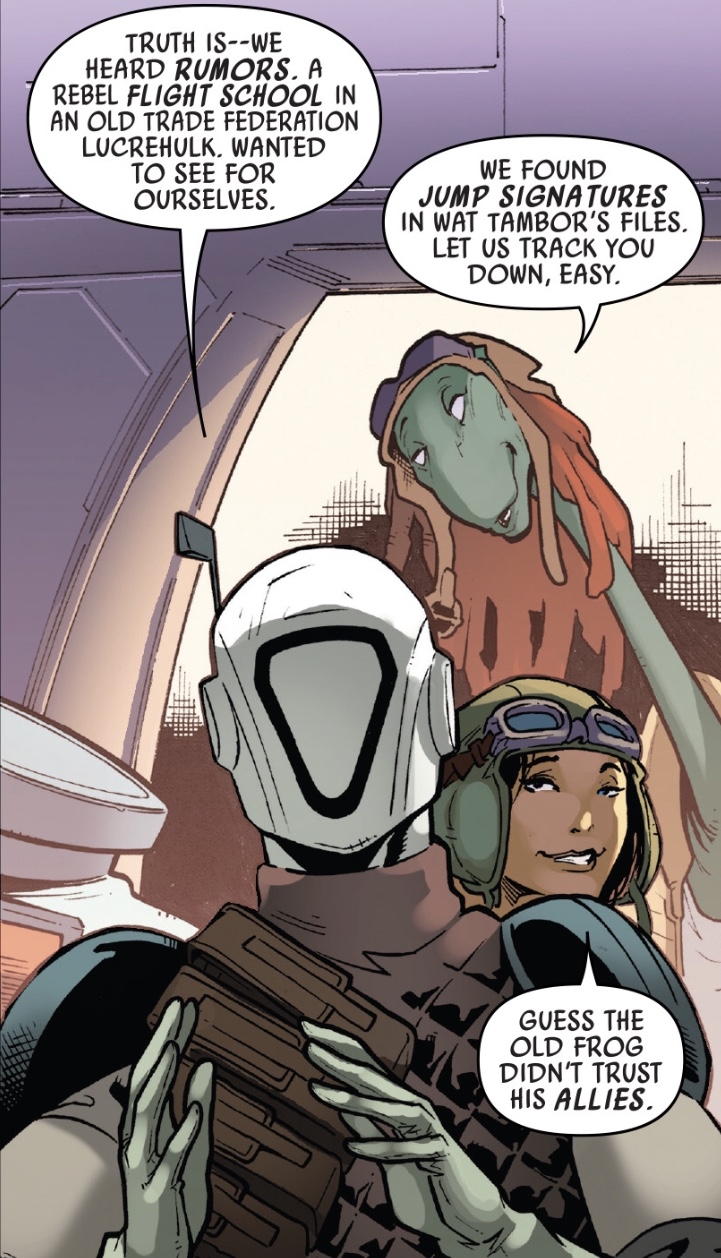 Doctor Aphra and her crew of mercenaries have arrived, posing as new recruits. Apparently, the flight school is one interested recruits must find their way to, like some sort of secret dojo. Aphra points out it wasn’t hard for her to find at all. At this point, it’s not clear what Aphra and her team are up to at a secret Rebel flight school. In the conclusion of the last issue, they had been tasked by Triple Zero to break into an Imperial archive called Hivebase-1, which is part of the Tarkin Initiative and considered impossible to break into. Just a canonical reminder, the Tarkin Initiative is research and development for advanced weapons like the Death Star and other nasty stuff. Triple Zero discovered a large chunk of his memories are stored at Hivebase-1 and were put there by Wat Tambor. Perhaps they feel there may be someone at the Rebel flight school that could help them break into Hivebase-1 (or they could use as bait and switch to distract the Empire). It’s an interesting approach.

Lieutenant Tolvan is also with the mercenaries, disguised as Ombra, whom she killed and is now wearing the skin of. Remind me never to cross Tolvan or hope she doesn’t ever feel the need to impersonate me. Tolvan’s romantic interest in Aphra is not the primary reason she’s there. Her Imperial career has been ground to dust by Aphra’s actions and she wants answers. I’ve become a big fan of Tolvan over the course of this series. Not only is she a worthy adversary to Aphra, she’s a survivor and she’s in an interesting place where she wants to be loyal to the Empire but feels that loyalty eroding. I also just think she’s really cool and love her background of service to the Imperial Security Bureau. 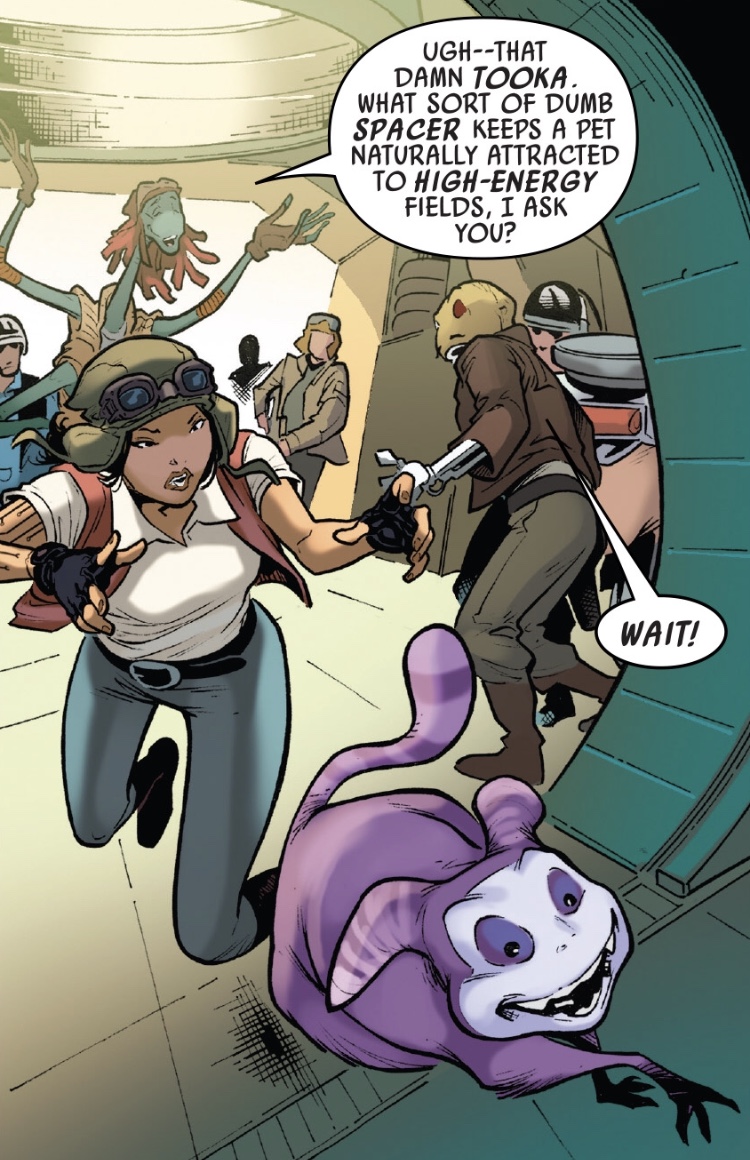 That tooka gets away from Aphra just as she and her team are being lead on a standard tour new recruits get of the flight school. The tooka runs into a restricted area, being used by one of the rotating Rebel generals who helps train new pilots. The tour guide makes quite a fuss as Aphra follows the tooka, warning it’s a highly restricted area and the general is not to be disturbed. Just a reminder, this general was the flight instructor who ordered her student to get to the medical bay and find some backbone. It’s certainly one of my new favorite generals of the Rebellion. 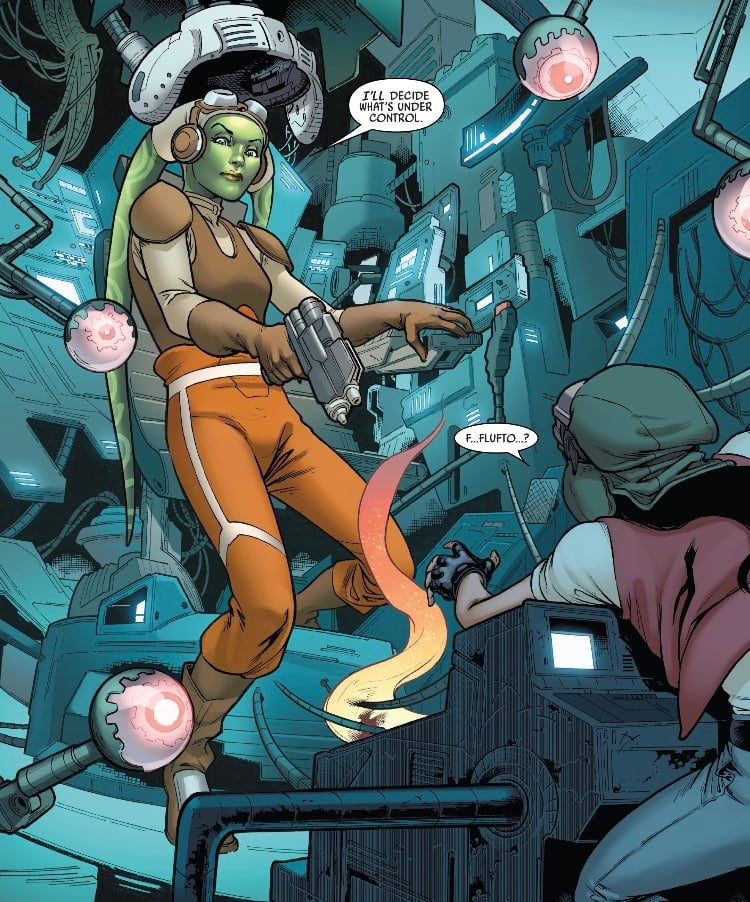 Folks, General Hera Syndulla has arrived! Well, we already know she’s been a part of the Rebel Alliance post-Rebels thanks to Rogue One and Forces of Destiny. But, I’d be lying if I didn’t tell you I was a bit giddy to see her show up here and know she’s about to get into the fold of whatever scheme Aphra is cooking up. Hera is my favorite Rebels character and the prospect of more stories about her role in the Rebellion makes me very happy. Back to the story, Hera wants to know who they are and realizes they are not recruits, but mercenaries. To the brig with Aphra and her crew. 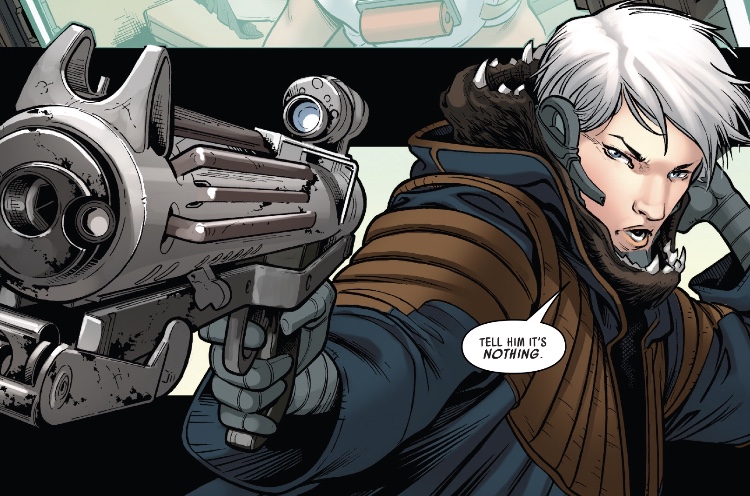 Tolvan catches up with Aphra in the brig and she wants some answers. Aphra has proven time and time again she can charm Tolvan to distraction, but this is different. Tolvan is having a personal crisis of sorts, as her Imperial identity and what she believes are in question, and despite her attraction to Aphra, she blames the doctor for it. Tolvan wants to know who Aphra is (she still doesn’t even know her name) and why Darth Vader himself would delete any information about her in the Imperial archives. Aphra’s able to do some sweet talking, though.

I think there’s more to this dynamic than just physical attraction. They see each other as equals, coming from polar opposites toward a middle, and Tolvan especially can’t seem to let Aphra go. Sure, she wants answers, but I think there is something much deeper there. Aphra seems to enjoy toying with the stoic Imperial officer, but she points out that her belief is Tolvan is much more than the Imperial garbs she has on. Aphra, in a way, reinforces Tolvan’s individuality and is helping the lost officer find herself in the galaxy. I’ve enjoyed Tolvan’s emergence of character as she’s given in to her more human feelings and allowed herself to explore the feelings she has for Aphra. I’m cheering these two on because I feel like they’ll bring out the best in each other.

The reunion between Aphra and Tolvan is short-lived. Dek, nutty, multi-colored droiddeka, breaks them out of the brig. The only problem is a random bolt of electricity fires and knocks out Tolvan. She’s out cold, but Aphra hides her in the same duct Tolvan entered the brig through, knowing what the Rebellion would do if they found her. Aphra and her crew stay put, proving they are capable of escaping from the brig, but have chosen to stay to gain Hera’s trust. 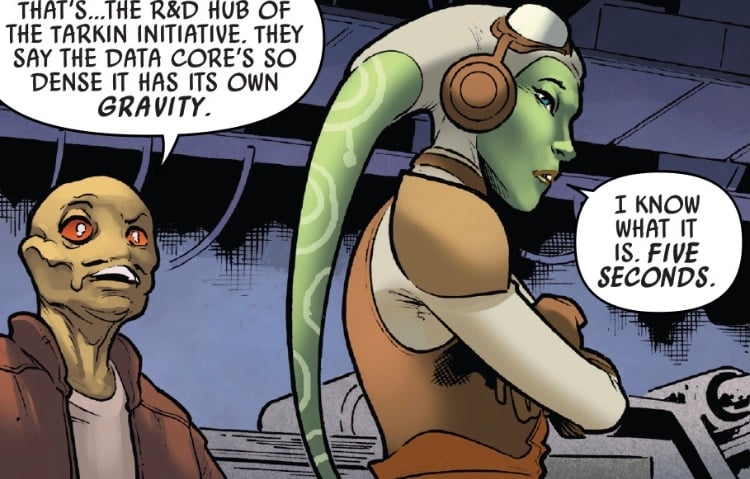 Trust isn’t exactly what they get from Hera, but she’s willing to give them a fighting chance to leave the Rebel flight academy. If they tell her why they came aboard the ship, she’ll let them leave and only consider siccing her students on them. Aphra says there’s no need and tells Hera they’ve found a way to get onto Hivebase-I. Just as Hera orders her soldiers to stand down their weapons, the trap is sprung. 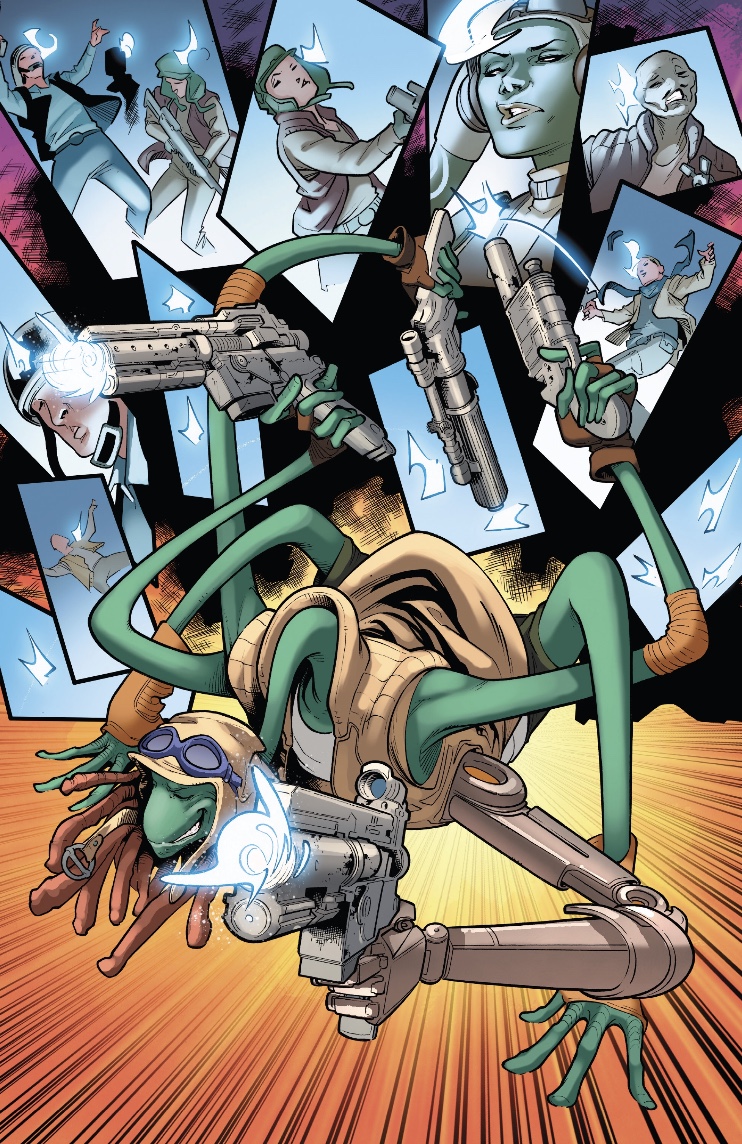 A furry of blaster fire (set to stun) is unleashed and the Rebels are put down. Aphra’s masterplan is revealed: kidnap General Hera Syndulla. It turns out everyone knew except for Tam Posla, who is not happy about it. He considers their plan dishonorable and quits the team in anger. Aphra seems fine with that, as I suspect her intention is to slowly pick these mercenaries off one-by-one so she can eventually make her escape from Triple Zero, and orders the ship to take off. Tam Posla has a last minute change of heart, but dies trying to hop aboard the ship. 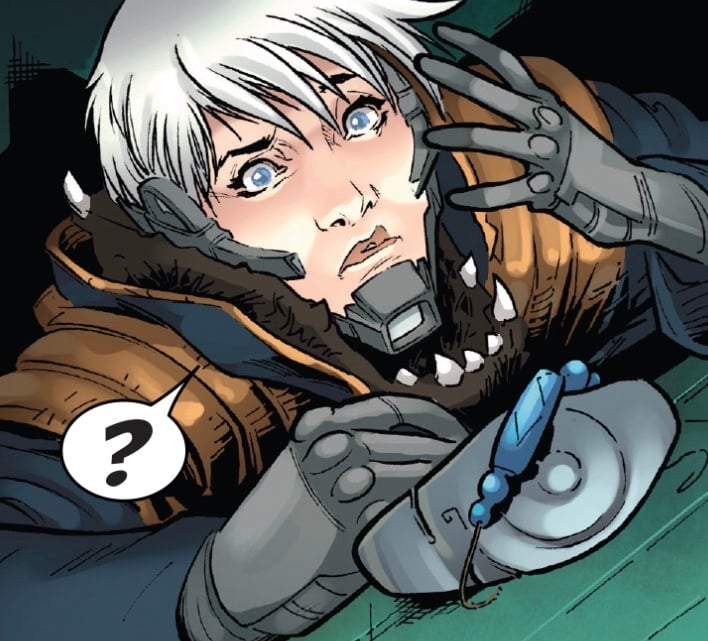 Tolvan has regained consciousness in the ducts and finds something Aphra left for her. Looks an awful lot like some sort of homing beacon with one of Aphra’s bracelets. If you remember, Tolvan’s an admirer of the bracelets Aphra wears. I can’t tell for certain if it’s a homing beacon, but I’d bet Aphra wants Tolvan to find her again. Though, it would be a surprise for someone as discreet as Aphra to leave something so blatant. Maybe it’s part of the plan. 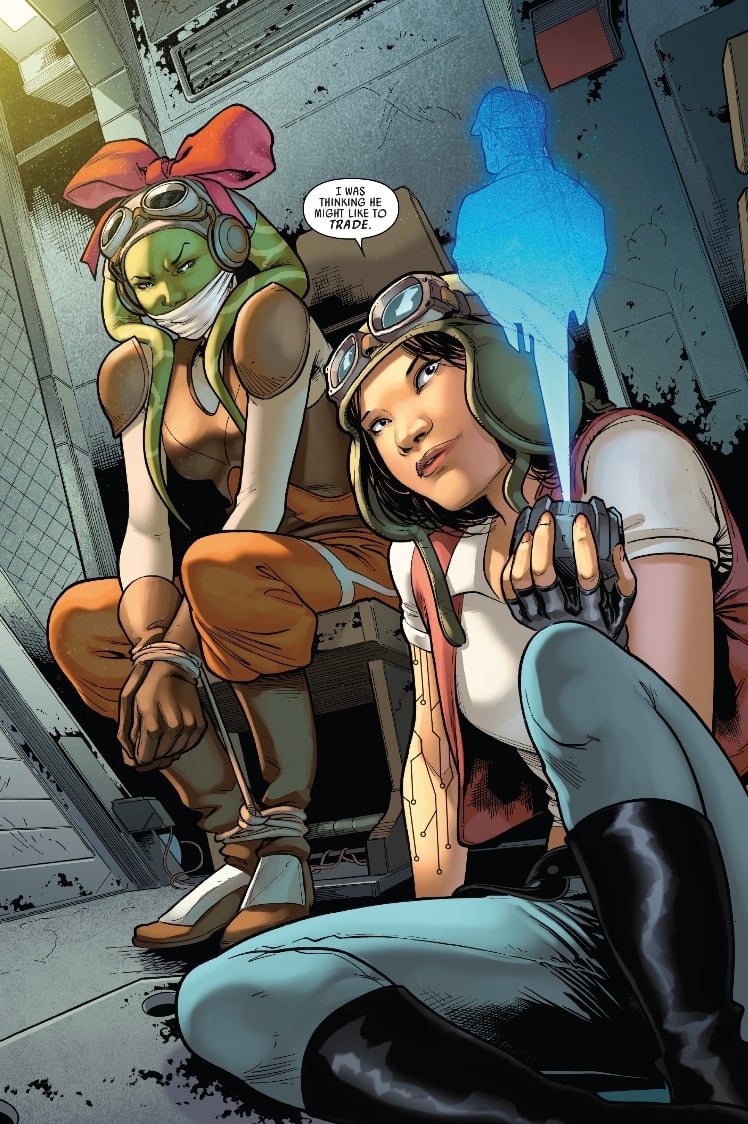 Well, now, Aphra is about to make life pretty sticky for Hera. She’s contacted the Empire and is offering a trade for access to the archive. At this point, I imagine General Syndulla is one of the most wanted rebels in the galaxy, and most Imperial commanders would love to deliver her on a platter. However, I don’t think Aphra ever thinks in terms that simple, and I’m sure she has something much more complex than handing over Hera to the Empire in some sort of trade. Your guess is as good as mine, but I can’t wait to find out.

This issue was a lot of fun. Writers Kieron Gillen and Si Spurrier keep the tone light, while still giving us some great Star Wars storytelling. Aphra is such a great character and I love seeing the galaxy through her eyes. I’m thrilled we have General Hera Syndulla along for the ride! The art by Emilio Laiso and colorist Rachelle Rosenberg is great, especially the opening pages that establish the Rebel flight school. “Remastered” has been a solid arc and is taking Aphra in a direction that convolutes her place in the galaxy, as she’s no longer just a person navigating archaeological sites or doing research for the Empire. She’s a compelling, complicated human getting by while trying to establish herself for the sake of…herself. Aphra is winning and I’m very excited to see where she goes next, but we have two more issues left in “Remastered”, so her time with Hera Syndulla is what’s foremost on my mind. 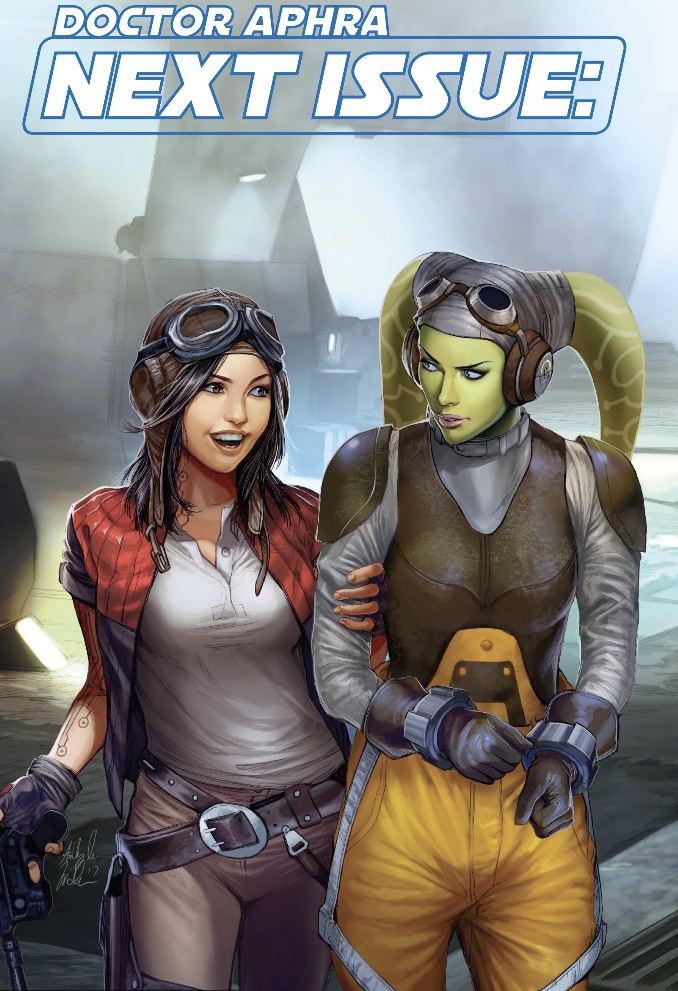