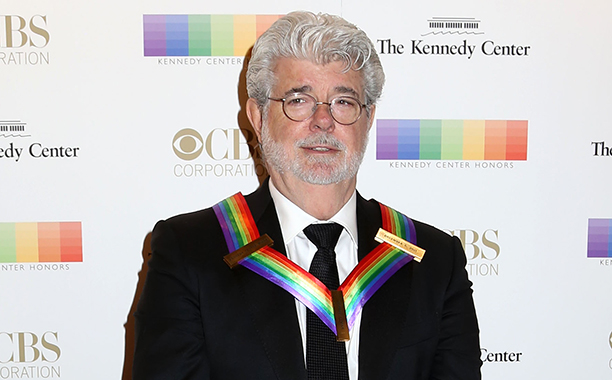 George Lucas was one of five honorees at the Kennedy Center Honors on Sunday night.  Lucas was called out for his legacy in the film industry.  Legendary Director and friend of George Steven Spielberg spoke specifically of Lucas the groundbreaking visionary.

But Spielberg wasn’t alone in his praise.  In addition to a message from Carrie Fisher delivered via projection from a certain familiar astromech droid, Lucas even received some love from the President of the United States who had arrived late to the even fresh off the heals off his address from the Oval Office.

“Think about how many children have been raised, at least in part, by George Lucas,” he began. “Think about how many young people searching for their place in the universe have thought to themselves, ‘If a kid from Tatooine moisture farm can go from bulls-eyeing womp rats in his T-16 to saving the galaxy, then maybe I can be something special too?’

“George, I don’t know if you’ve heard, but they might even make a brand-new Star Wars movie soon. It’s very low-key, it’s not getting a lot of promotion,” Obama joked. “But it’s also pretty remarkable that nearly 40 years after the first Star Destroyer crawled across the screen, we are still obsessed with George’s vision of a galaxy far, far away. And we’ll be raising our children on his stories for a long, long time to come.”

Congratulations to Mr. Lucas, the creator of all that brings us here.  The honor was well deserved.