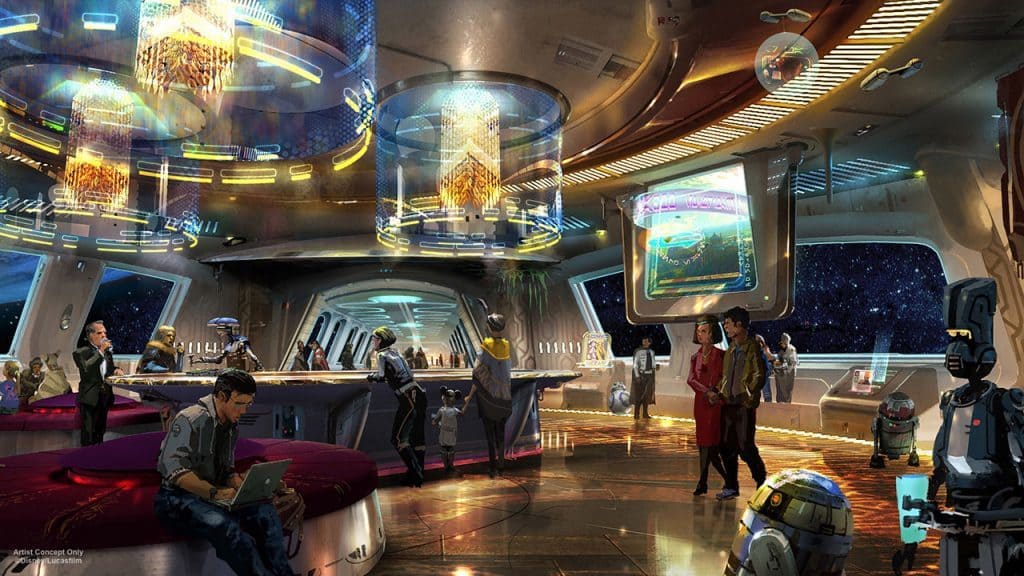 Disney isn’t just in the Star Wars business when it comes to movies and television. The galaxy far, far away has seeped into countless arenas in Disney’s portfolio such as merchandise, clothing, and theme parks.  Disney is continuing with that trend as they move towards adding new entertainment venues to their resorts and cruise line.

First up is a report from Inside the Magic who pulled information from the new Art of Star Wars: Galaxy’s Edge book.  In that we get our first look at the long ago announced, but never seen, dinner show that will be coming to Disney’s Star Wars: Galactic Starcruiser hotel.

From Inside the Magic:

While we knew about the existence of the Silver C Lounge — which the book also confirms will have a Sabacc table — and the lightsaber training experience, this is the first time Disney Imagineers have shared details about the dinner show that will be available onboard the Halcyon luxury starship.

In the imagery of the show [pictured above], it appears that Guests will be seated at tables surrounding a sleek stage where performers will either stand or be projected. From this concept art, it is unclear if holograms will be used to project Star Wars species, such as Twi’leks, onto the stage, or if Cast Members will wear elaborate costumes taken straight out of a galaxy far, far away.

Sabacc and alien entertainment while sipping Star Wars themed drinks seems like an excellent way to boost the immersion of the Galactic Starcruiser for those lucky enough to stay there. And, it should add to the appeal of a multi-day commitment to the resort experience. 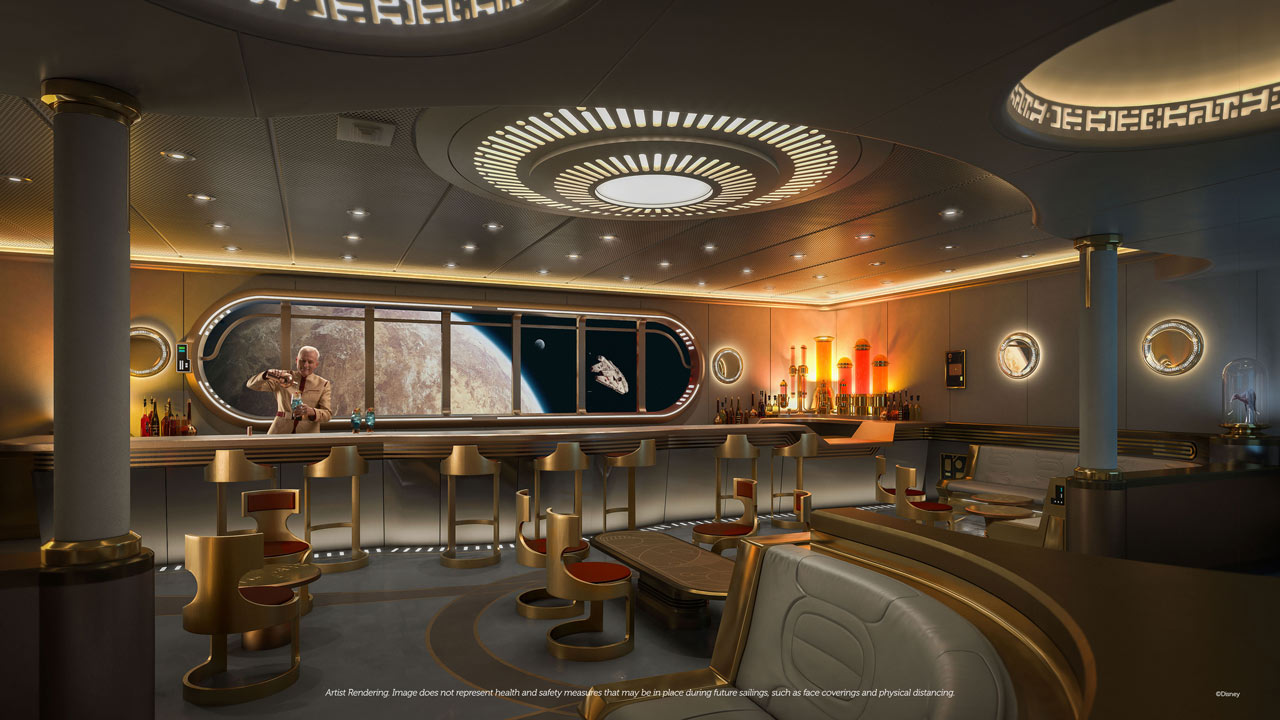 Moving off-shore, Disney also has plans to add a fully themed Star Wars Dinner show to its newest Cruise Ship the Disney Wish.  The Star Wars official site has details and an interview with Danny Handke, the imaginer responsible for designing it.

“We want to see a little bit of Empire-era Star Destroyers and TIE fighters,” Handke says. “And we want to see the Resistance from the First Order era, the prequel era, a familiar ship from The Mandalorian, and Rogue One.” The illusion will be created via the bar viewport, a widescreen, seven-pane window to the stars.

Handke goes to talk about the new special effects that will be included in the show and commits that attendees will get to experience such planets as Tattoine, Batuu, Mustafar, and Endor.

Handke on the Endor portion of the show (via Starwars.com):

“It’s my personal favorite scene,” he says. “You see the forest moon from Return of the Jedi and Kef Bir, the water moon from The Rise of Skywalker. When we designed this scene, we were talking about, ‘What should it be? Do we see Death Star debris? Let’s do the First Order era for that.’ So I asked the Story Group and ILM, ‘Could we do like, a little bit of Star Wars? What happens if we have some Resistance cruisers, and the First Order shows up? Can we do a little battle?’ They said, ‘You can do a little skirmish. Not a full-on battle, but a skirmish.’ And so we staged this really cool skirmish scene, where the Resistance and the First Order are fighting each other. You get the laser fire, you get the TIE fighter explosion, and then at the very end we have these three X-wings that come down in front of our screen and protect us. I am so stoked about it.”

The Handke interview has lots of good details, from the types of drinks that will be served, the inspiration behind the décor for the venue, and even his history as a Star Wars fan. So head over to the official site to read more.  And head to Inside the Magic for more details on what Art of Star Wars: Galaxy’s Edge reveals for the upcoming Galactic Starcruiser.