Review: A New Player Enters the Game in ‘Jabba the Hutt #1’ 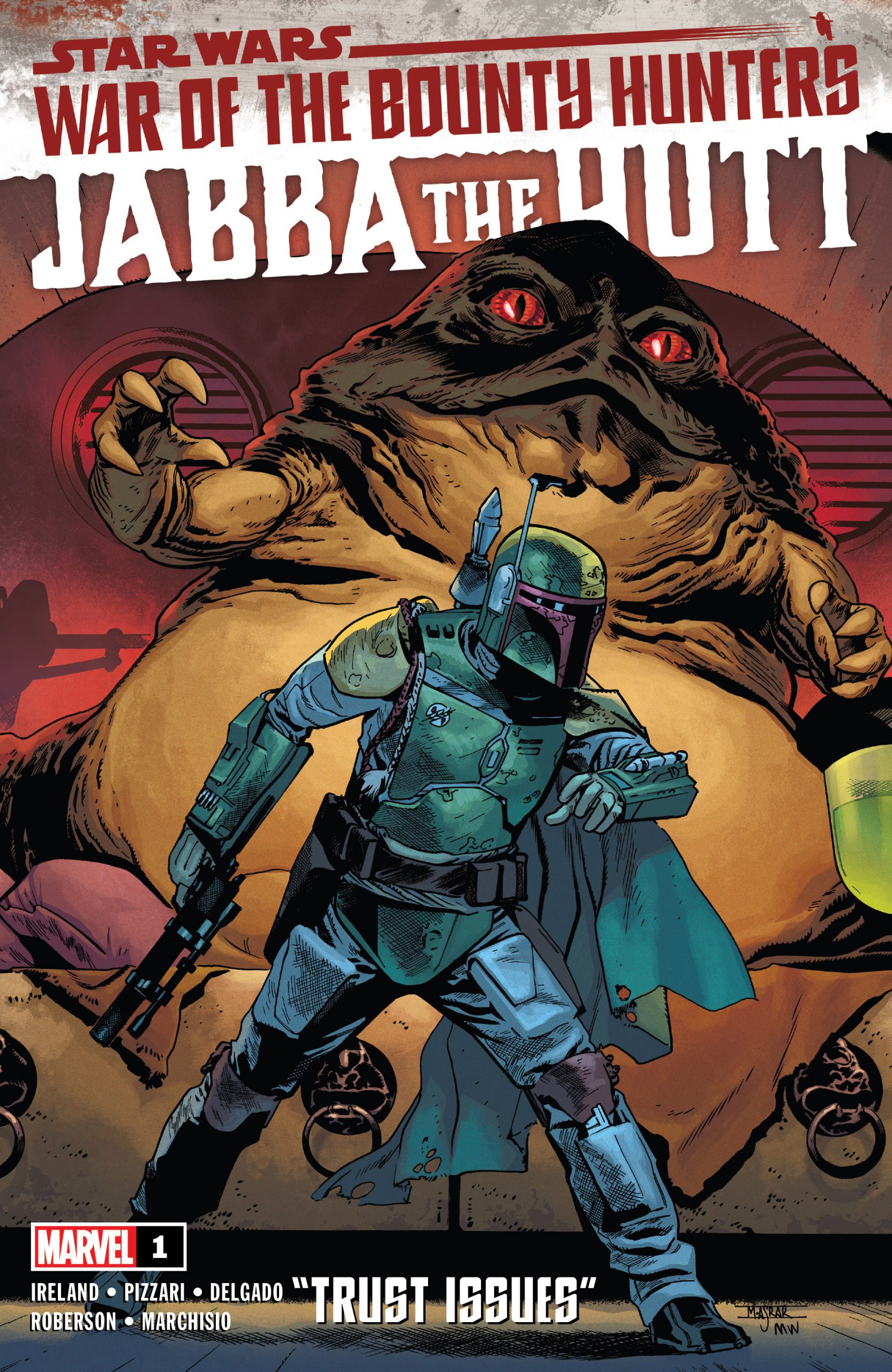 This Jabba the Hutt issue is the first of four one-shots that will add texture and tell side stories to the War of the Bounty Hunters crossover. Still to come are 4-LOM and Zuckuss, Boushh, and IG-88 issues in the coming months.

We’re treated to the introduction of a new bounty hunter/assassin/information broker in the form of Deva Lompop, one of Jabba’s contacts who owes him a great debt in blood, for what seems to be saving her life in the past. He continually calls  on her to fulfil her debt, something that may never come. We see two of these mission, one set during the time of the crossover and another at an unspecified time in the past.

This is a fun adventure, granted maybe one that fills in details we didn’t need and adds in more characters to what is already a character packed crossover event. The story is split into past and present so we’ll split the two.

Deva, Boba, Jabba are all at Jabba’s palace. It’s interesting to see the gangster in a more casual setting, rather than the classic one of him on his high pedestal with a Rancor close by. Him and Deva have obviously known each other a long time (writer Justina Ireland has mentioned Deva may appear in The High Republic stories in the future).

It’s all business now with Jabba though when he assigns the two to hunt down Jarm Brock, a man who works for Bokku the Hutt, who are overstepping by attempting to infiltrate Mos Entha.

Jabba wants to send a message to those who have betrayed him; unfortunately, he’s already lost a lot people attacking the place so he’s sending in his two best. Deva pushes back, saying she’s no longer a mercenary, but Jabba brings up her ominous debt.

It’s going to be interesting to find out what happened to cause Jabba to have such a tight grasp over her. Jabba understands the power of debt and explains to Boba that it is always stronger than trust. 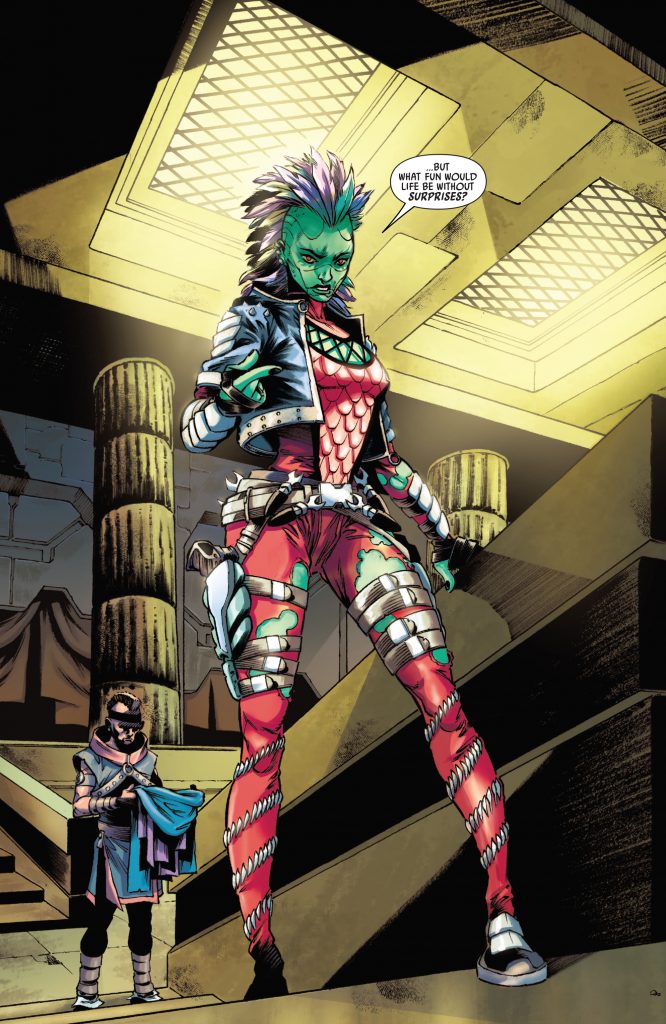 On arriving at the ‘mining town’ everything seems suspect. Firstly, as Boba informs Deva, it’s not a mining town, it was where Jabba kept his slaves. Secondly, there are Soikans there, a species Hutts would never work with.

They go in for further inspection, the place seeming like a ghost town. After talking to an odd, lone bartender the two are ambushed by their target, Jarm Brock! 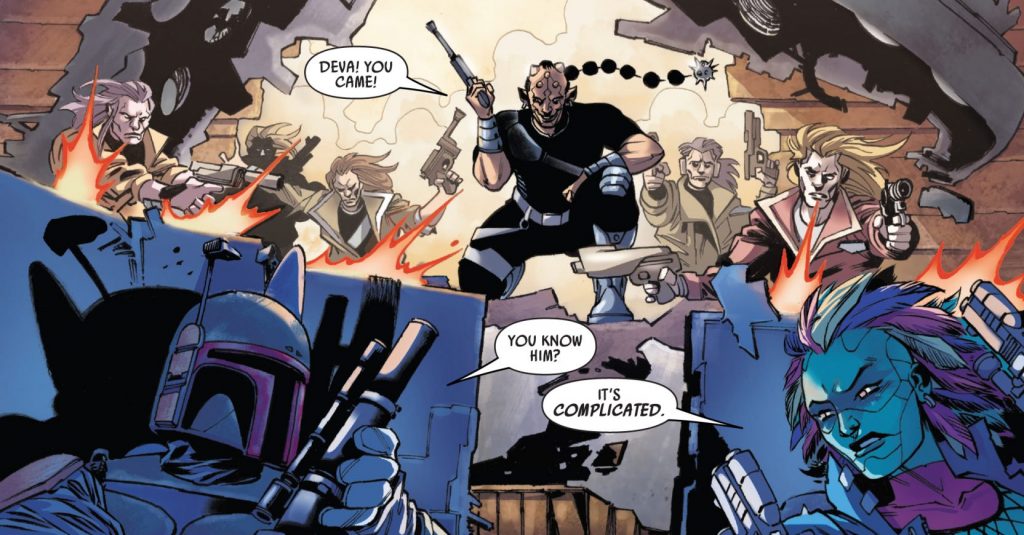 In a brutal scene, Deva throws a grenade at the gang that causes those exposed to its skin to melt off while the duo escape the cantina. Jarm tries to escape in an old speeder but Boba isn’t about to let his charge get away.

We get some classic Boba the hunter moments as he disarms the leader mid-flight, lands on the speeder, and kills all those on board, except for the target.

Deva and Boba both have their man, the only thing left to do is bring him back to Jabba for questioning, to make sure it is Bokku that he’s working for. Deva has other plans however….. 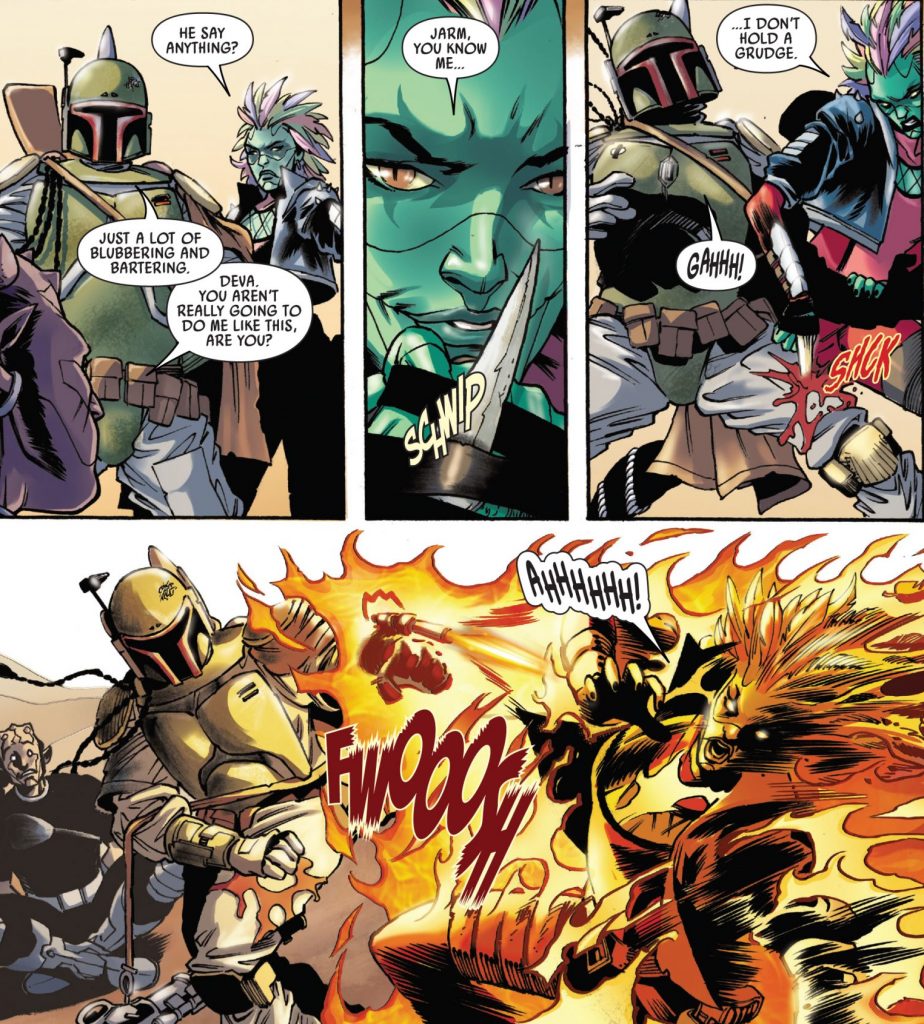 Unfortunately for Boba, Deva’s species heal quickly and she stabbed him with just enough poison to knock him out. Her Ex finally feels like talking and explains that he’s been working for Crimson Dawn and that this entire plan was a ruse to pit Jabba against the rest of the Hutt council. This is an interesting revelation that feeds into the bitterness between Jabba and Bokku in last weeks War of the Bounty Hunters issue (since this is set before then). Deva could tell Jabba this information, but she’s not going to help save the being that holds her captive in debt. Rather than have him talk, she eats Jarm, just leaving his head to return to Jabba as proof.

In the present timeline Jabba has heard nothing from Boba Fett since arriving on Nar Shaddaa (Boba took Solo there because his carbonite was malfunctioning) so the Hutt sends Deva after him.

She tracks him to the arena we saw him fight in during the War of the Bounty Hunters: Alpha issue and then proceeds to get Doc Ragon, the man Boba hired to fix the carbonite chamber, drunk and find out all about Solo, and the whereabouts of his lab.

Deva contacts an unknown party who we find out is Crimson Dawn, who she’s now working with. When Jabba contacts her she proceeds to say she’s found Fett but finds no sign of Solo.

At this moment a random figure appears in Jabba’s palace presenting a gift. 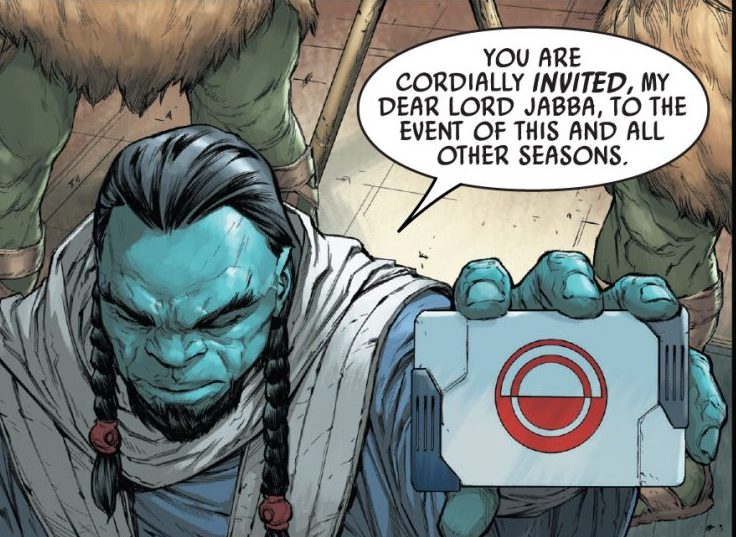 We see now how Jabba came to receive his invitation to the grand Crimson Dawn event. The call is ended and Deva communicates with a member of Crimson Dawn, Jabba has reneged on his promise to release her debt for the last time.

Meanwhile, Jabba believes Boba has sold Solo to Crimson Dawn and puts the bounty on his head we’ve seen Boba fighting for the last month. 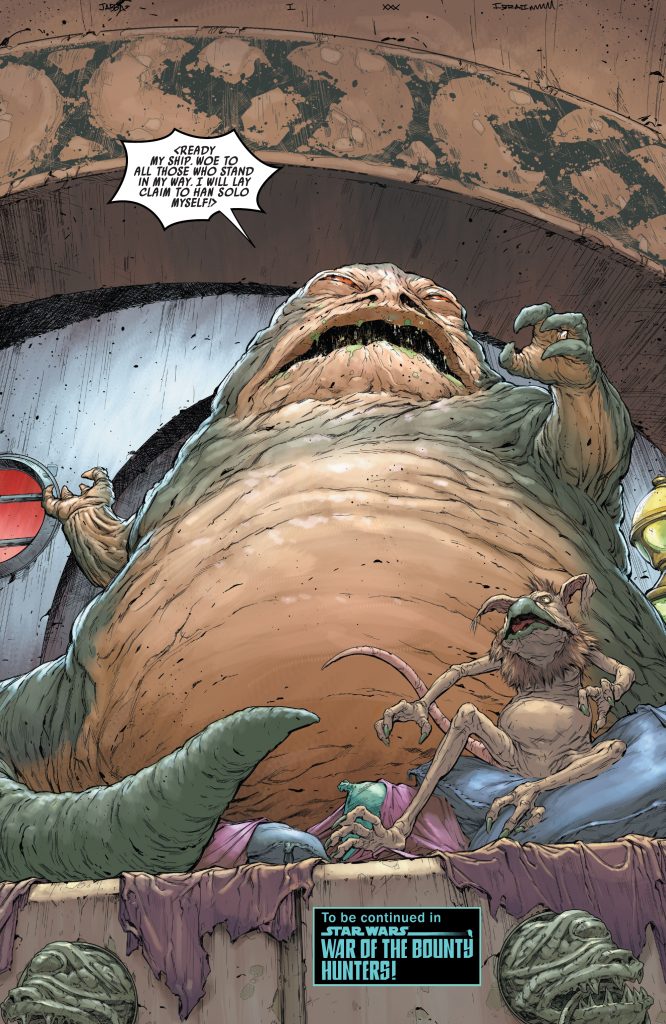 This issue is a nice one-shot but also fills in a lot of information we probably didn’t need. Deva is entering a crossover already stacked with characters so for the most part she’ll probably be a prominent character in all the upcoming one shots (which she’s confirmed to be in). Deva is a cool character, and writer Justina Ireland has given her a lot of personality and motivation in a short amount of time.

This issue sets the upcoming bounty hunter one-shots as being their own contained sides-stories, or even just extra tales that fill in the blanks. Either way, this was a fun, if slightly convoluted, issue. 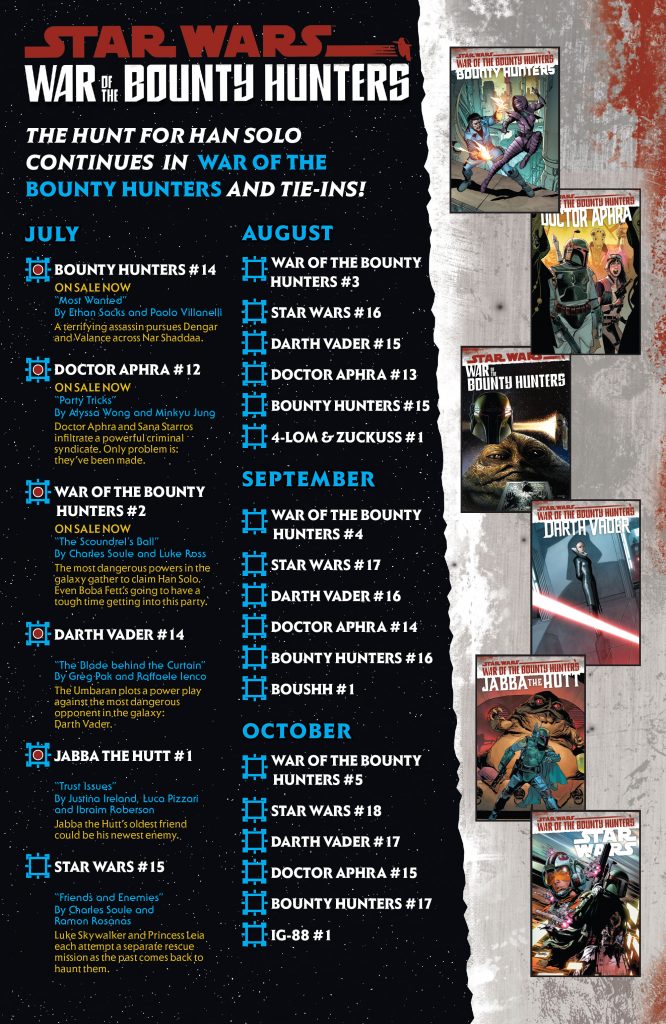 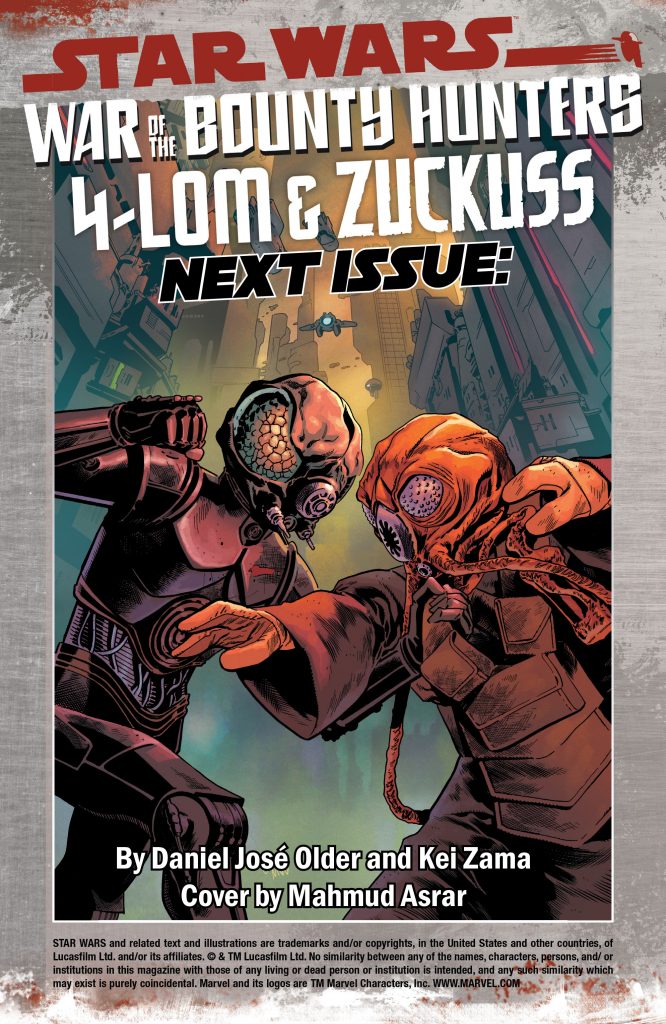