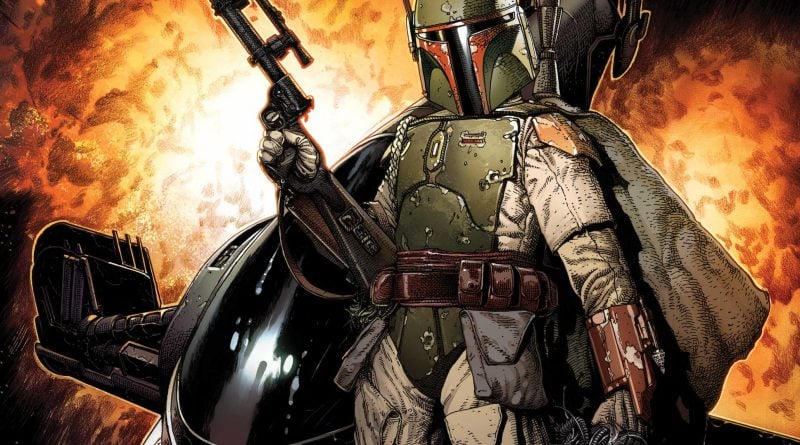 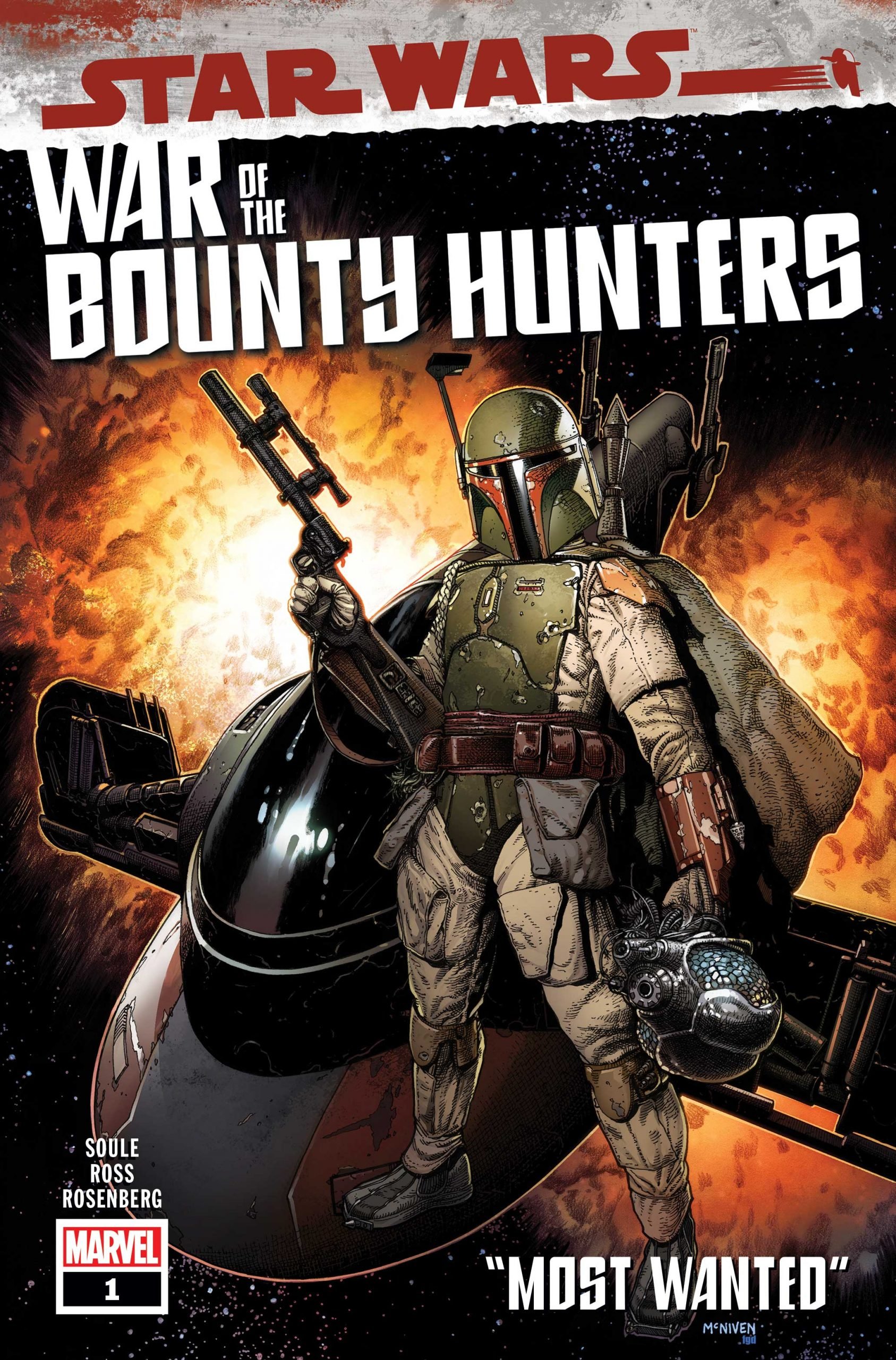 This is it! The big crossover event is here. After an Alpha issue and a month of preludes to move all the characters into place, the main event has arrived. The war of the Bounty Hunters begins.

Soule pulls no punches in this issue and proves just how in tune with Star Wars he is. This issue is juggling a lot and manages to still make itself feel focused while being accessible to those only familiar with the films. 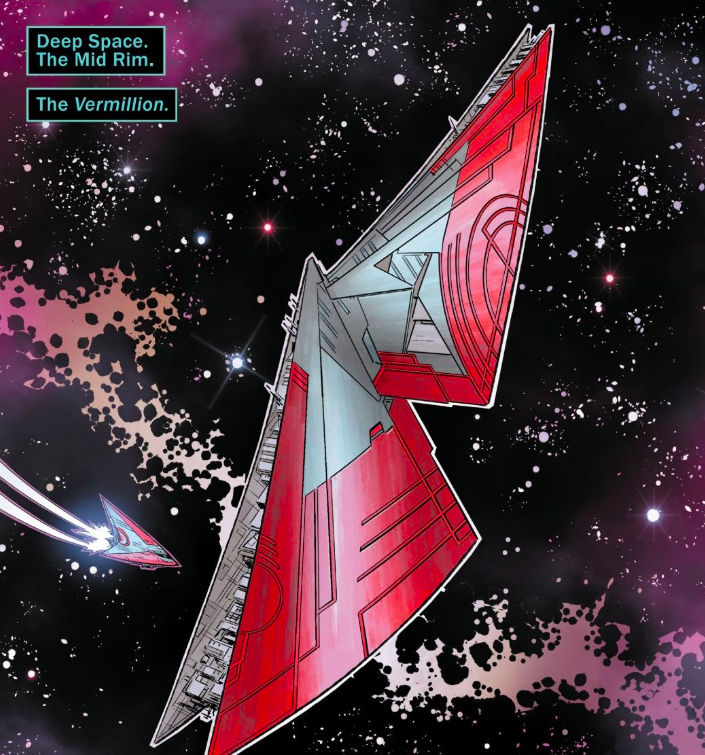 After the opening crawl, which simply states that Solo has been stolen from Boba Fett, we find ourselves on a mysterious ship in deep space. A hooded figure welcomes back her minions, who have brought back Han Solo encased in carbonite (see the Alpha issue for how they stole him). 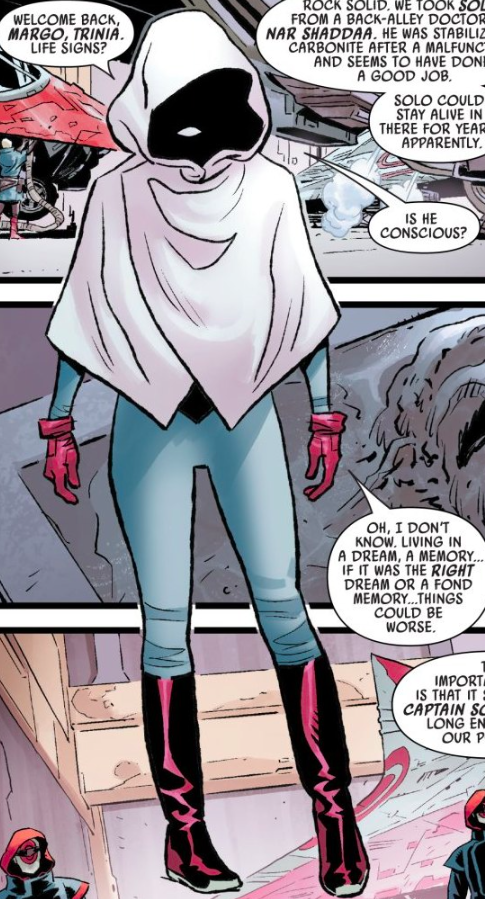 Their leader laments that being stuck in the right dream could be better than some realities. With Solo in their possession they can send the invitations and he can begin to serve his purpose. 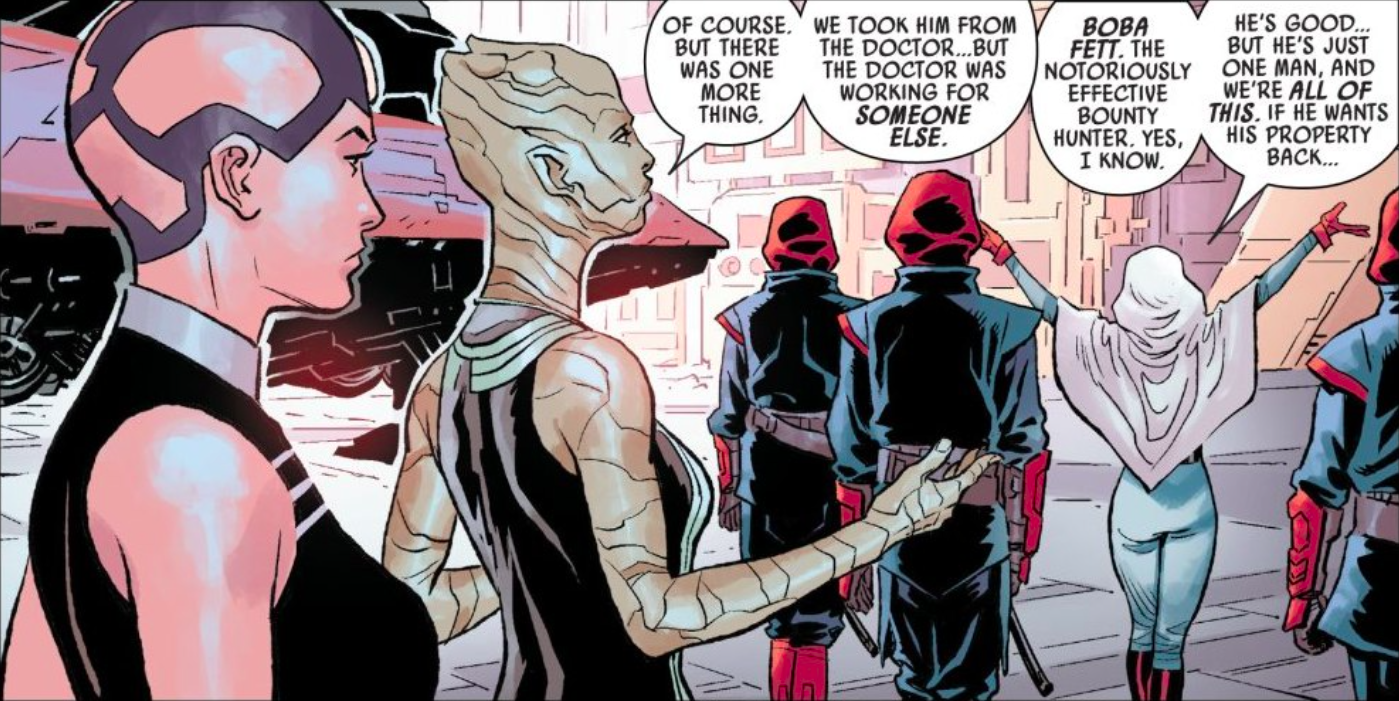 Despite robbing one of the most dangerous bounty hunters in the galaxy, their leader isn’t bothered, considering the size of their organization too big for one man.

Boba Fett is in a bar on Nar Shaddaa (which is hopefully named Bar Shaddaa) venting to a bartender about how he has been robbed and someone needs to pay.

Unbeknownst to Fett, there is an open bounty on his head, so any and all bounty hunters are after him. A deadly duo have caught up with him, setting off a small charge on his ship as he approaches it.

Zuckuss: deadly bounty hunter and king of referring to himself in the third person, has Fett trapped, which surely means that his partner 4-LOM isn’t far behind. 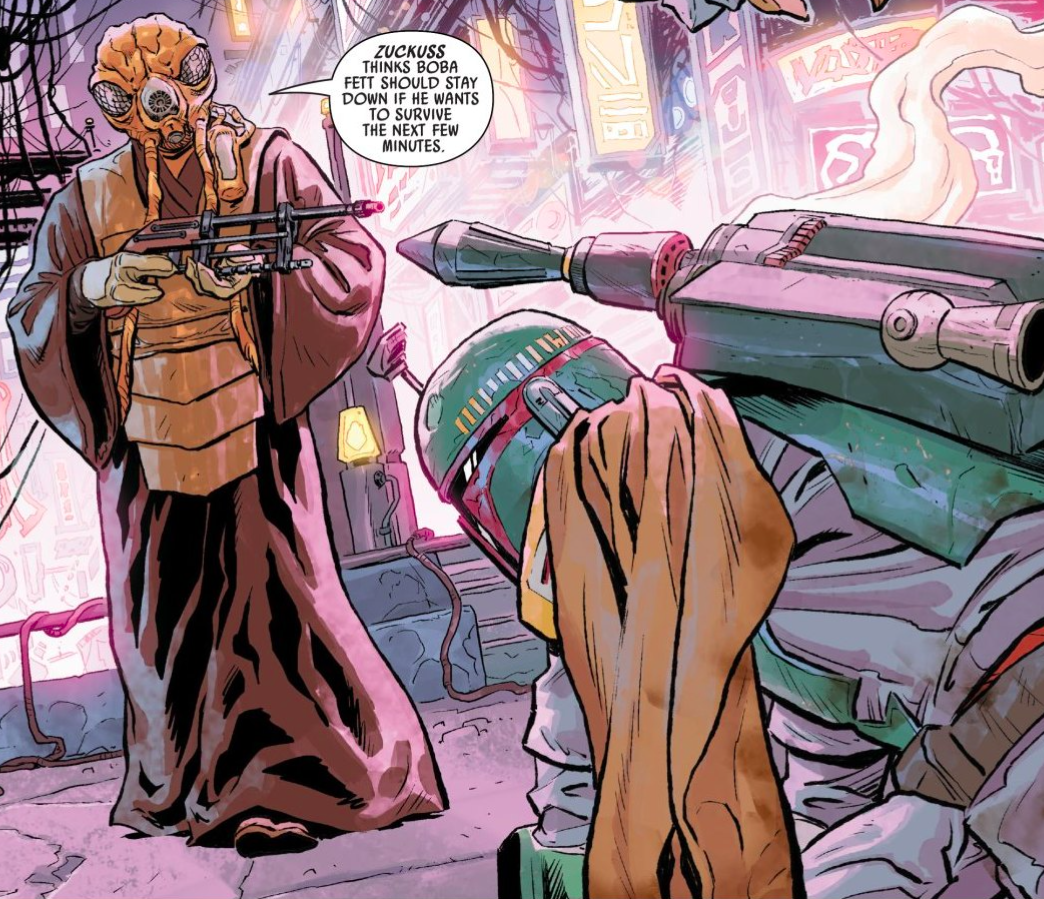 Boba agrees to stay down, until the odds are back in his favor, of course. 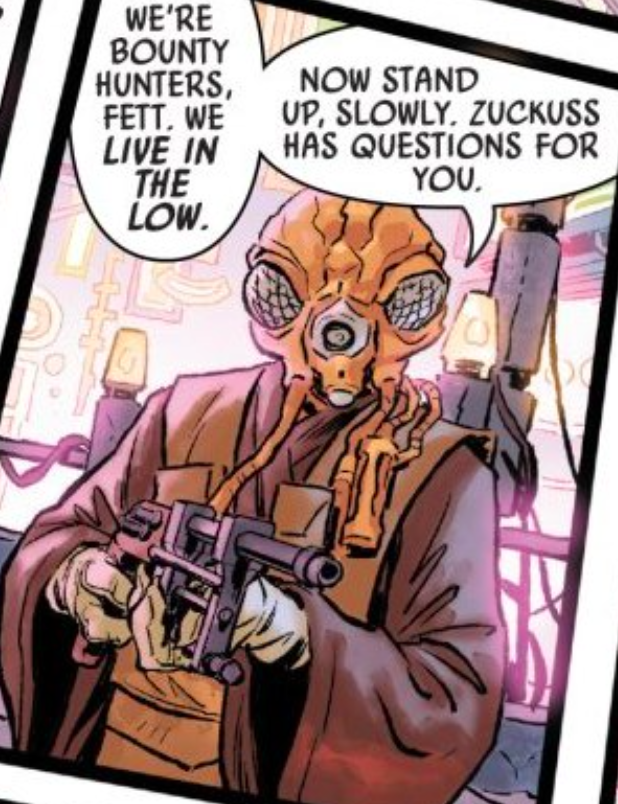 The two bounty hunters simply want information: where is Han Solo? Boba isn’t really in a talky mood and is mostly just annoyed they damaged the Slave I.

This issue has a few big layout shots that really stand out and show off the artwork at its best: including the below shot as Fett uses his ship’s cannons to gain the upper hand. 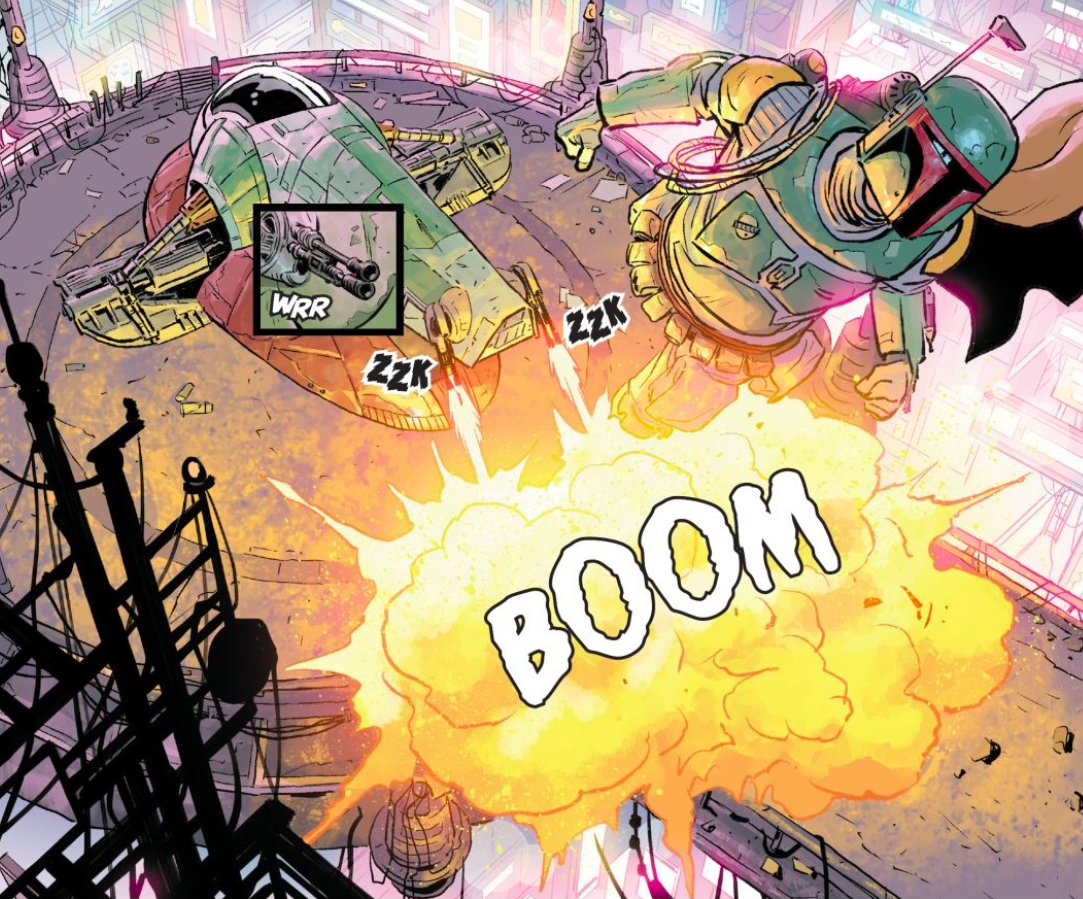 In a series of brutal moves: Fett kicks Zuckuss off the platform, finds the damaged droid 4-LOM, chops off his head, and plugs it into the computer of his ship to learn what he wants to know.

Fett realizes that Jabba has put out a galaxy wide bounty for him, dead or alive, with Solo as a bonus. So that can lead the infamous hunter to only one place: Jabba’s palace on Tatooine. 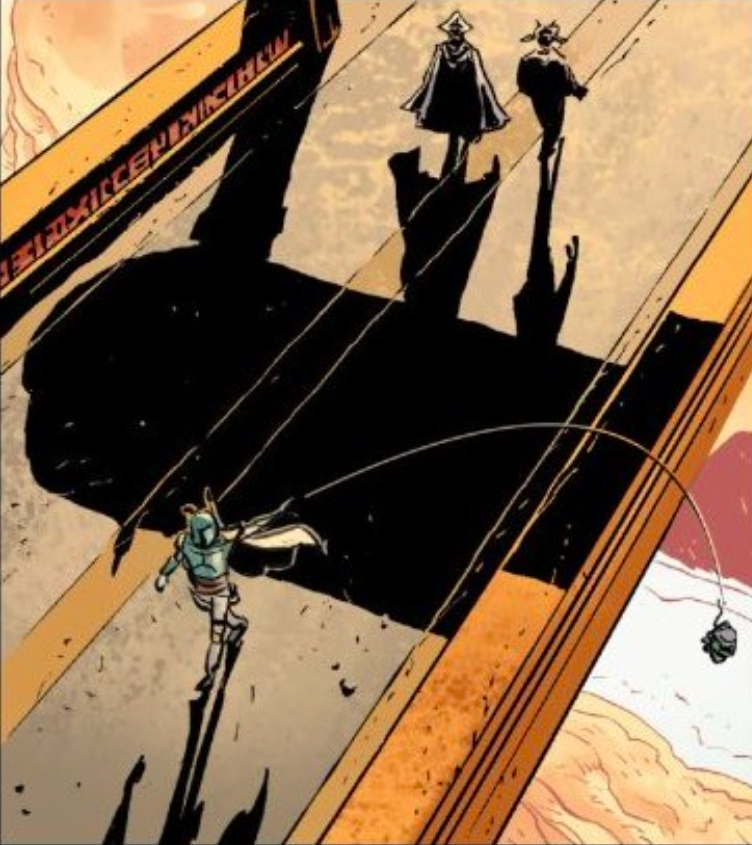 He discards 4-Lom’s head off the side of Jabba’s palace entrance. It will be interesting to see if this is truly the end for Zuckuss and 4-LOM, while not ‘major’ characters they did appear in The Empire Strikes Back. We didn’t see either of them die though, both of them fell off of high places which, by Star Wars logic, means we’re probably likely to see them down the line somewhere.

Fett is met by Bib Fortuna, Jabba’s right hand man, and the two discuss why Jabba placed the bounty. 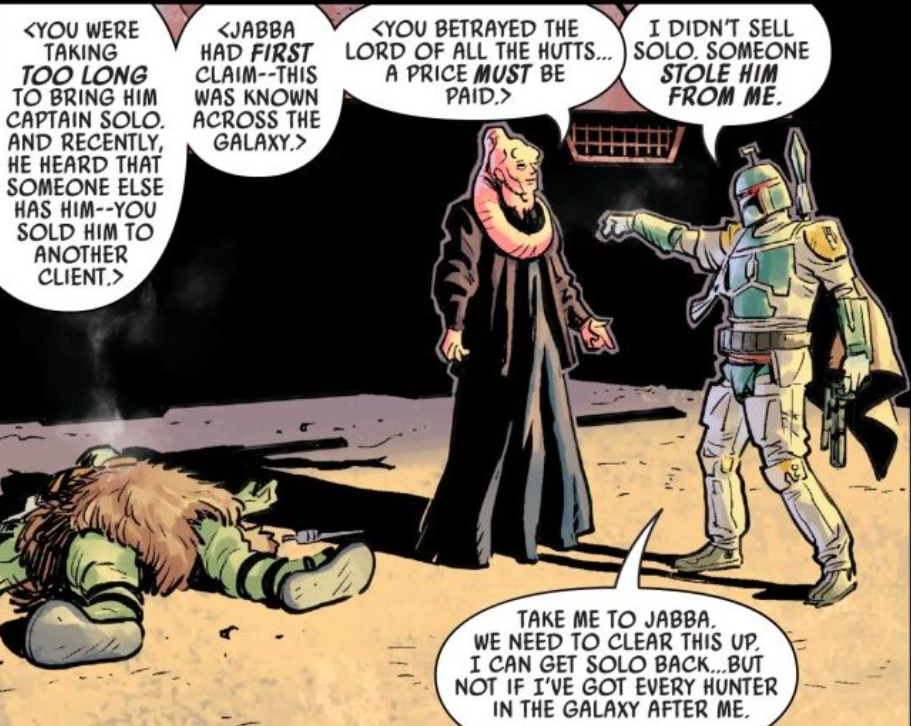 Jabba may have been mistaken but not much can be done about it now, the Hutt isn’t home.

Jabba is aboard his war barge, in hyperspace. In a fascinating scene we see the Hutts convening together as a council, discussing the invitation they have all received. We often hear reference to Hutt’s other than Jabba, and sometimes we see them, but it’s always very cool to see them interact as one big family/organization. 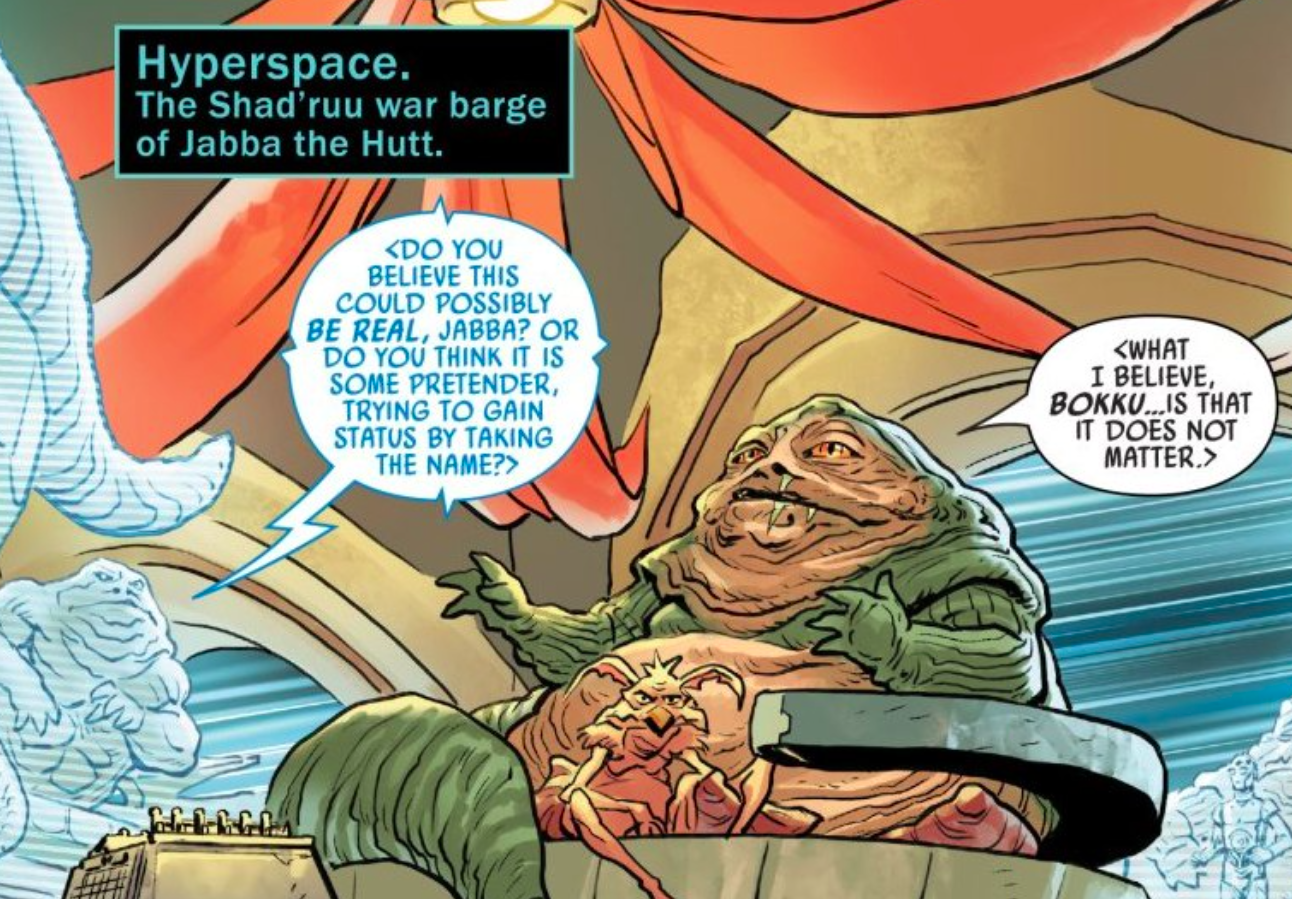 The Hutt’s have been given an offer to obtain Solo by a known group who haven’t been seen in years. Whether they are the real deal or not is irrelevant to Jabba, they have sufficient proof they are in the possession of Han Solo, and that is enough. 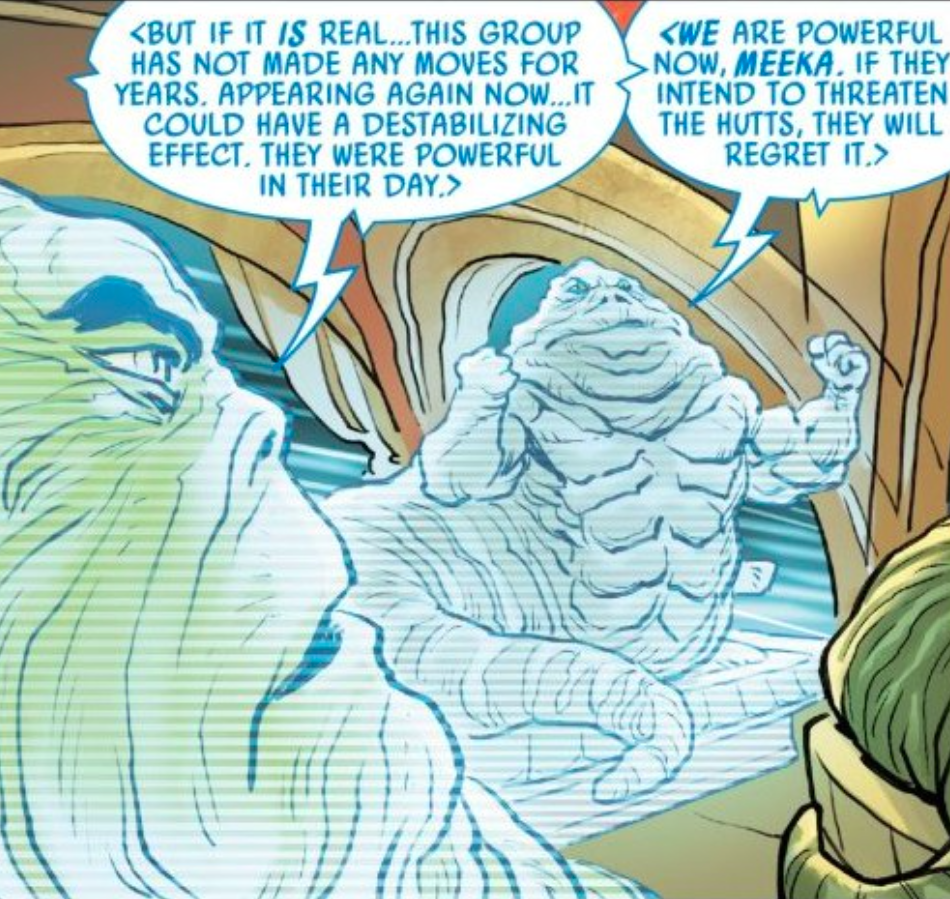 The oldest of the Hutts, Marlo, is asleep, and in being awoken for his opinion, is a little disorientated. This little gag gives us a cheeky reference to the High Republic; it’s nice to see this history weaved into other eras of the galaxy, especially from those old enough to have been there. 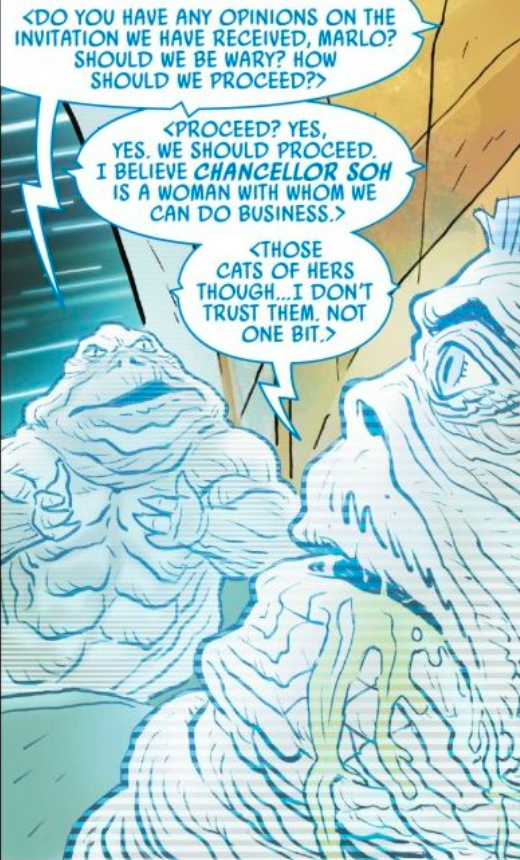 Is this is a passing comment or a reference to something more sinister? It is rather surprising to hear Chancellor Soh wanting to make deals with gangsters like the Hutts. We’ll have to see! For those playing at home, Marlo the Hutt also appeared in The Clone Wars. 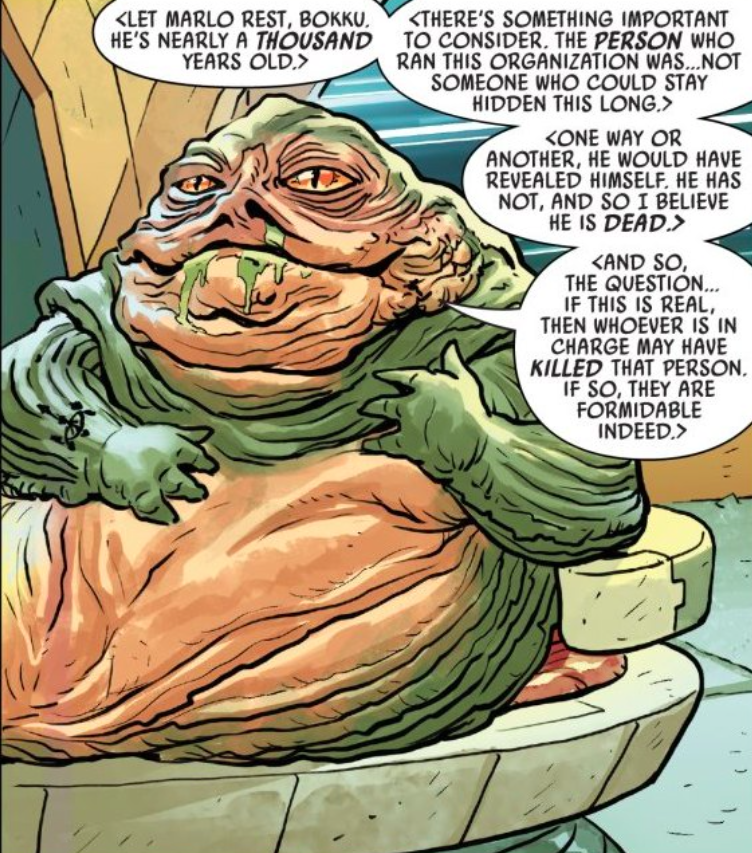 Jabba decides to agree to the invitation and vows that the Hutt’s can deal with this organization should they become a threat.

Meanwhile, Bib has told Boba about the invitation Jabba received from the group that stole Solo. After some pushing he shows him the message that was sent. 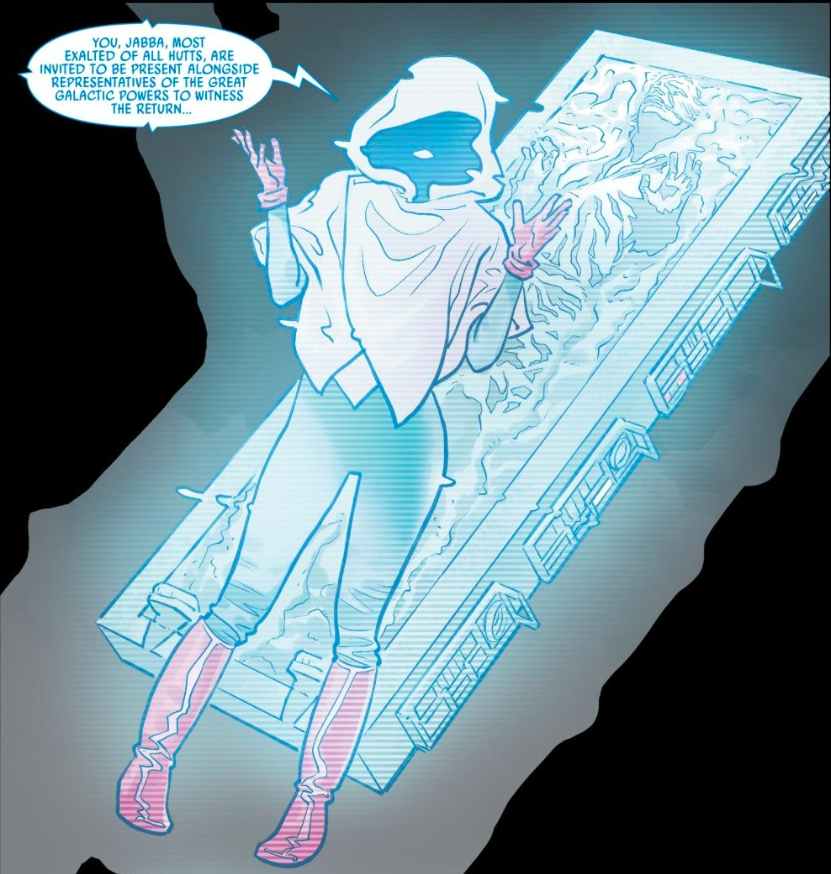 Soule delivers this reveal with such a punch. One that then makes all of Jabba’s musings fit into place.

The return of Crimson Dawn: the criminal organisation run by Darth Maul and featured in the movie Solo. By this point in the timeline, the events of Rebels have happened to Maul (I won’t say anymore for those who still haven’t seen it) and we haven’t heard from Crimson Dawn in 7+ years. It will be interesting to hear what they’ve been up to in the interim.

Crimson Dawn are giving Solo to Jabba as a gesture of goodwill and proof they can obtain things others can’t.

Boba Fett now has a mission: he wanted someone to kill and now he knows who it is. He’s going to get Solo back and get revenge.

In the comic’s final scene, Crimson Dawn’s leader is asked why Solo is so important, he’s just one man, and an unimportant one at that. 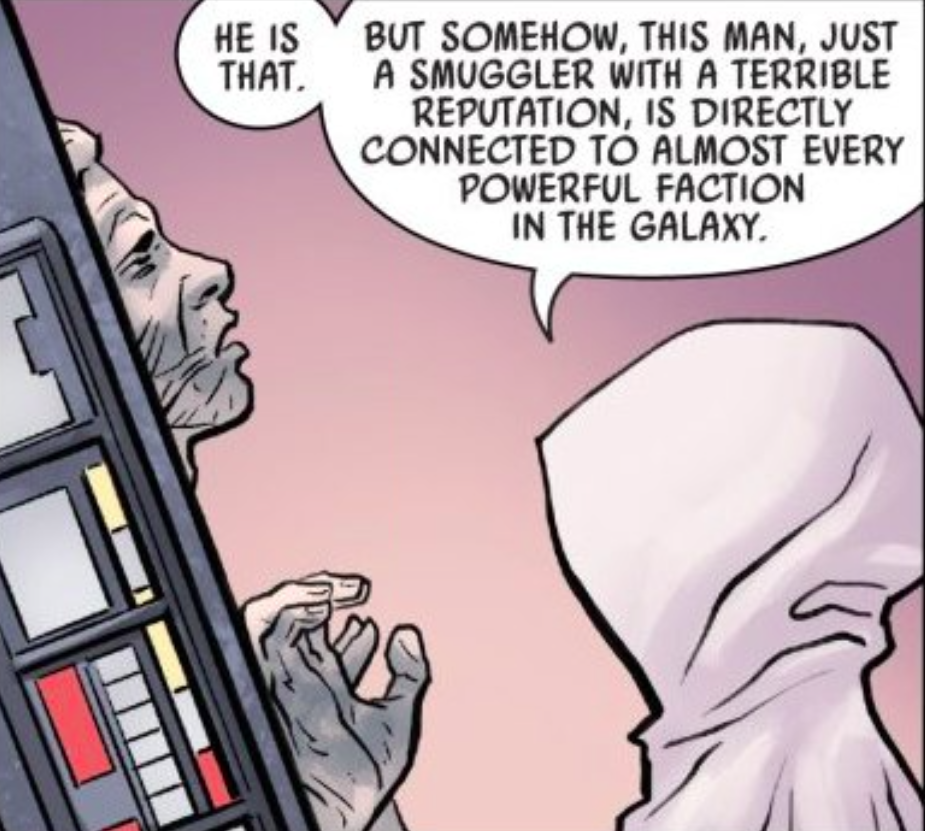 In an amazing two page spread, Soule and artist Luke Ross summarize Han’s importance to all the biggest players in the galaxy. It’s actually quite a touching piece: whether he saved you as an Imperial Cadet, wronged you as a smuggler, or saved you as rebel, so many people have a stake in the outcome of Han’s time in carbonite. 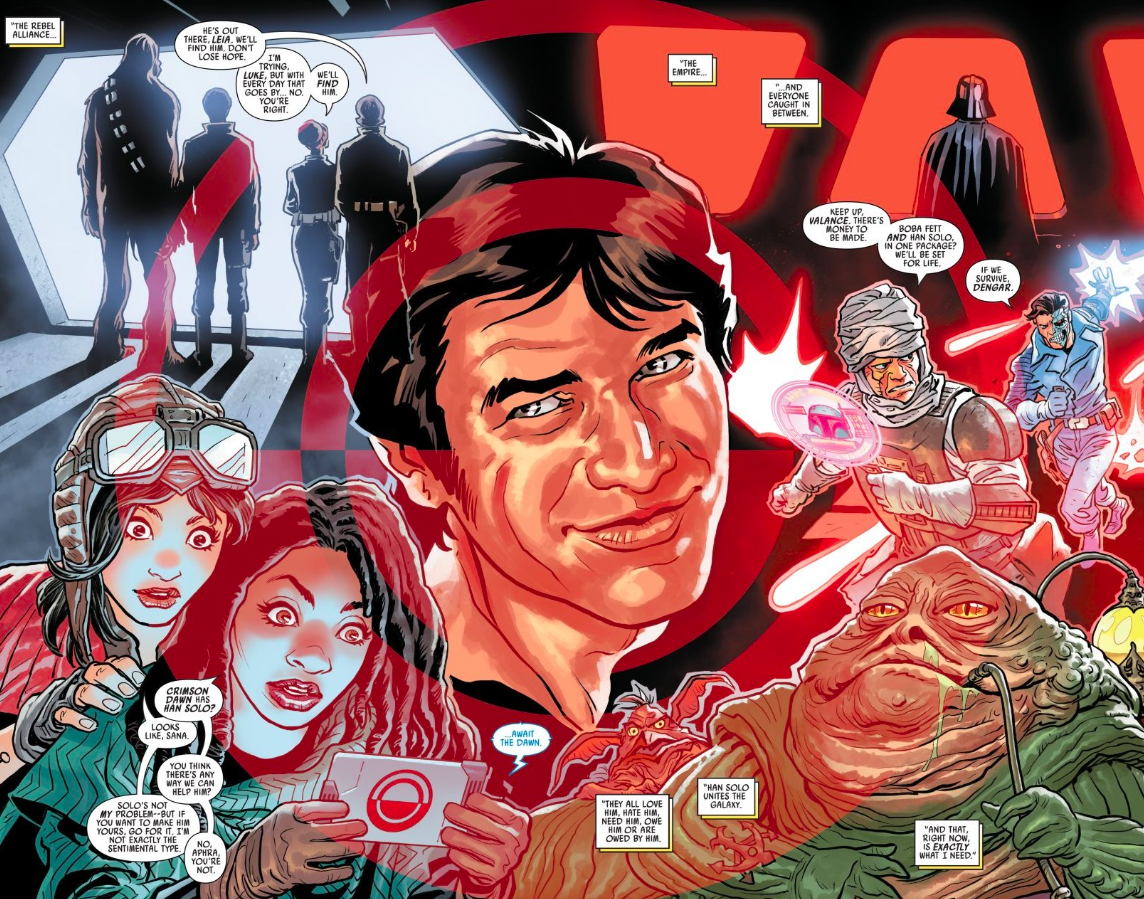 Of course, if we’re talking about all the people in Han’s life: those he’s loved, hurt, been hurt by, those that have shaped him, for better or worse….. 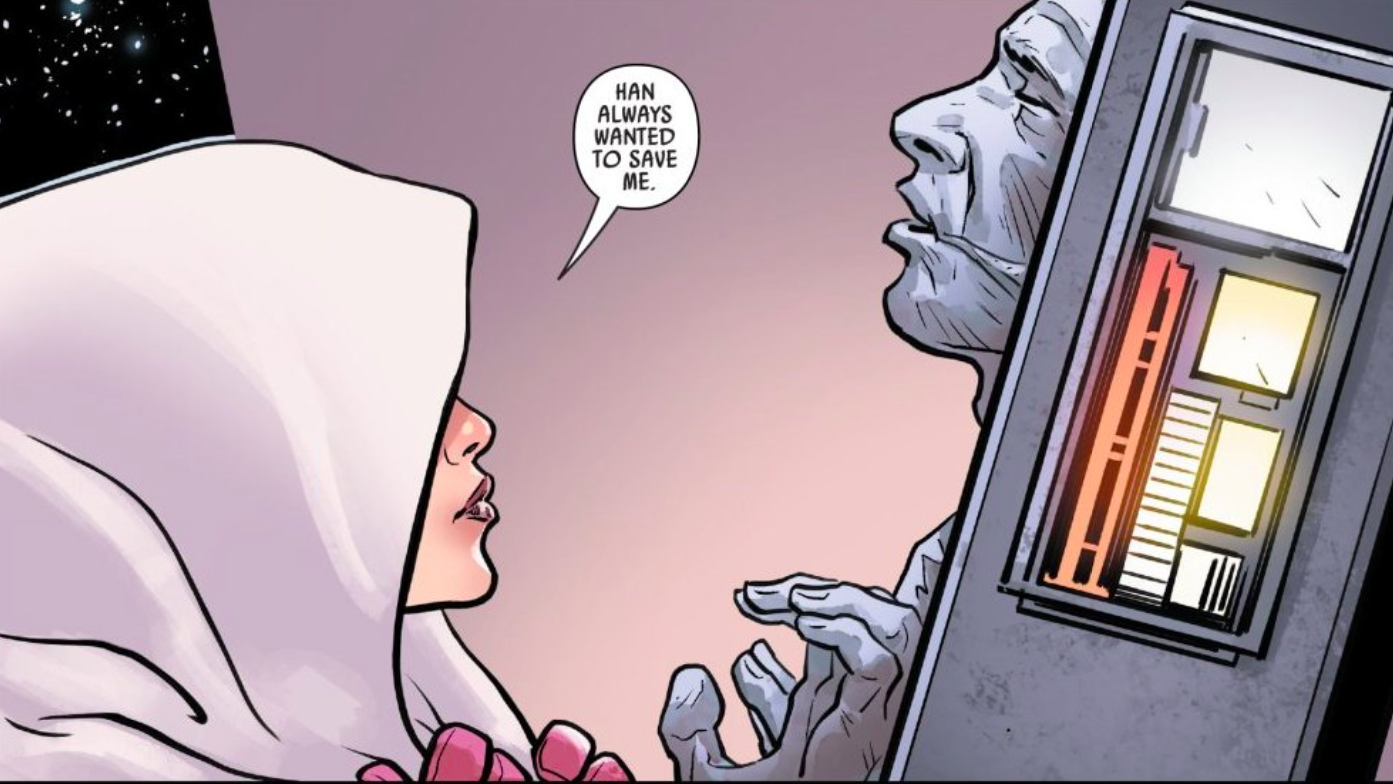 …well then that list is incomplete without one person in particular. 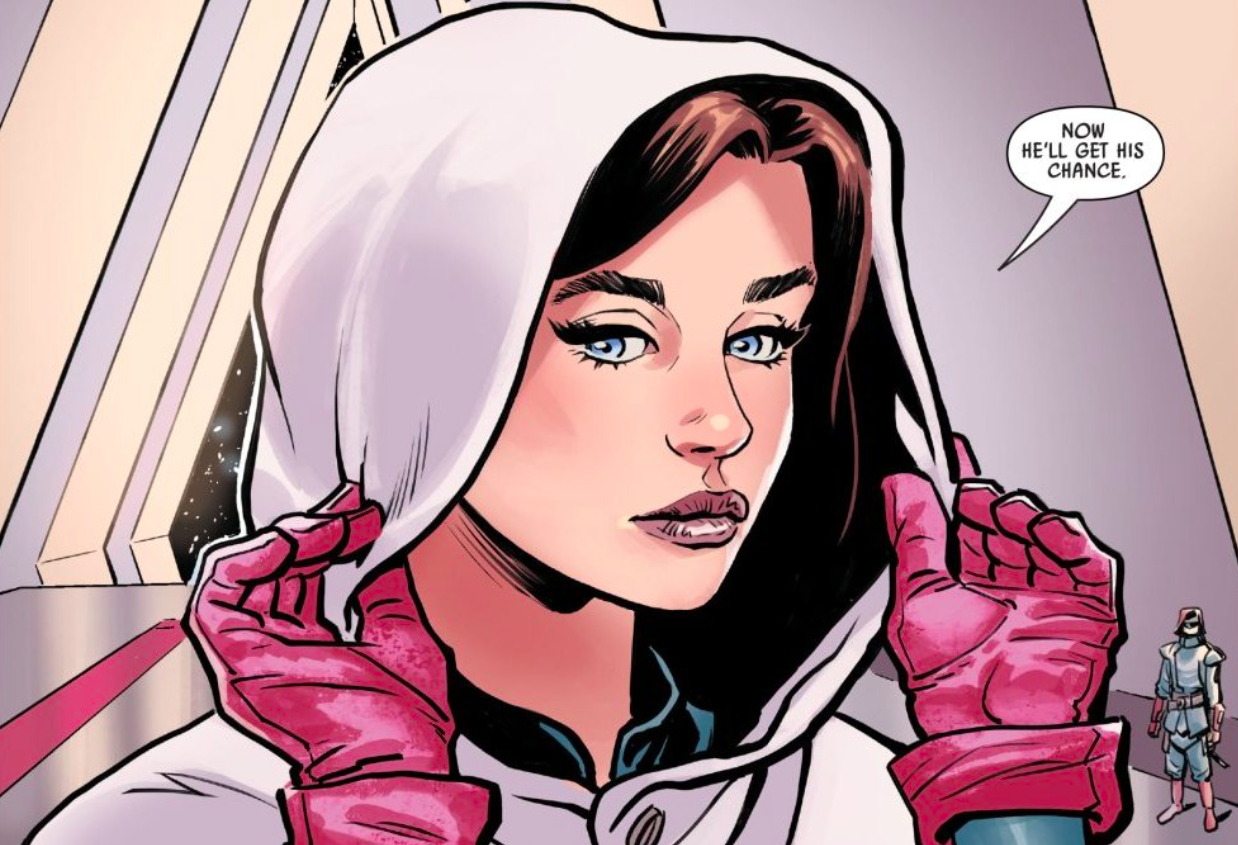 Qi’ra has returned! The female lead of Solo: A Star Wars Story, the woman who left Han, and joined up with Darth Maul and Crimson Dawn is back.

This is an absolute bombshell of a reveal and Soule sprinkles enough hints throughout the issue to make you want to go back and read it again, hearing everything said by the ‘anonymous’ leader in Emilia Clarke’s voice. Credit to artist Luke Ross for capturing Qi’ra (and Clarke) perfectly without it looking like a tracing of a live action still. If their was any doubt though, the final panel confirms the character by name.

This issue has gone all out and avoided so many of the tropes I thought it would contain to create something truly interesting and attention grabbing. Boba Fett vs. Qi’ra in the coming issues is something no one is going to want to miss, so credit to Soule.

What this means for those in the #MakeSolo2Happen crowd (which includes myself) is interesting. It could be a monumental sign that no plans exist for a follow up to Solo, or those that do don’t include Qi’ra (which makes sense since a follow up would probably revolve around Han and Chewie getting on Jabba’s bad side).

On the flip side, it could mean Soule has been given the green light on this story because the future of Qi’ra’s live action appearances is in a post-Return of the Jedi story: be it Lando, Book of Boba Fett, or something yet unknown.

Whether we choose to be optimistic or pessimistic about the character’s future, this is very exciting and bodes well for the rest of the crossover. The series has kicked off at full speed, fingers crossed it can maintain this quality throughout! 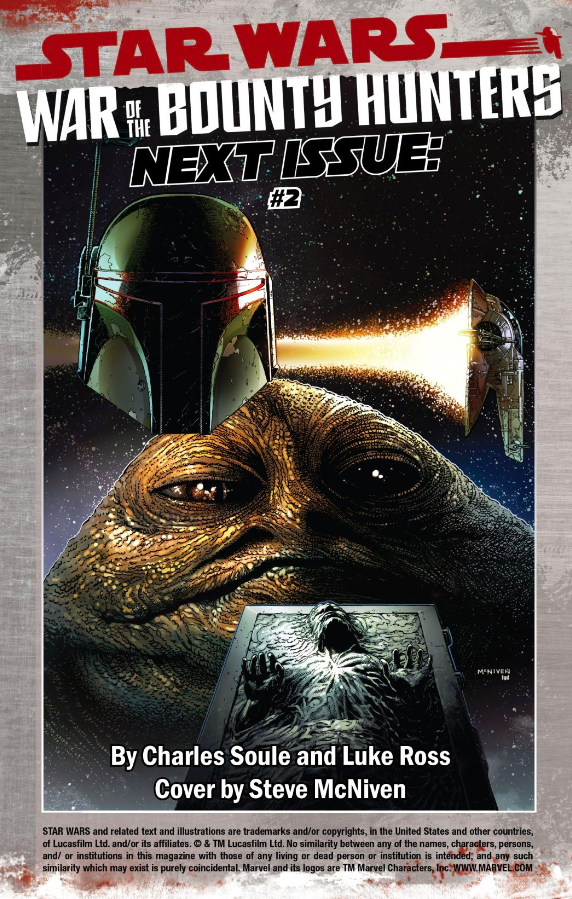 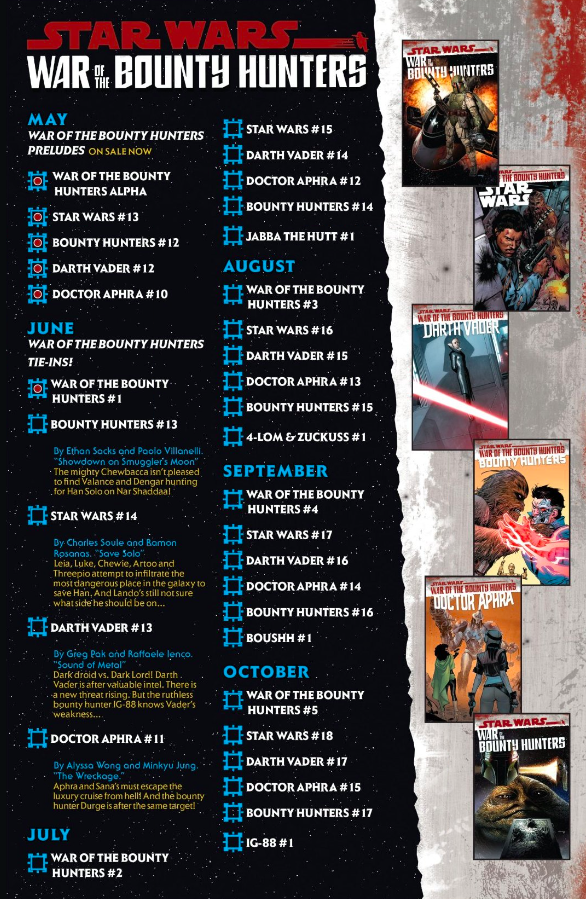 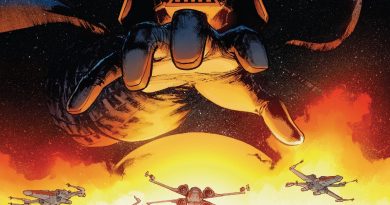 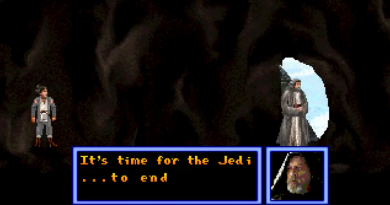 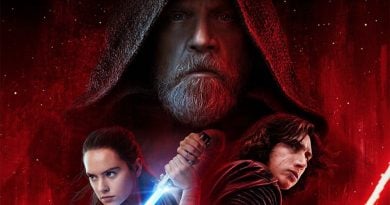 Spoiler Review: The Last Jedi. A Surprise, to be Sure, but a Welcome One