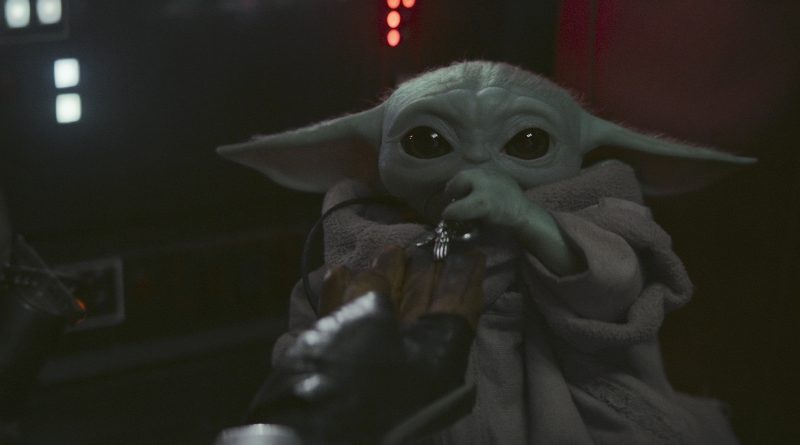 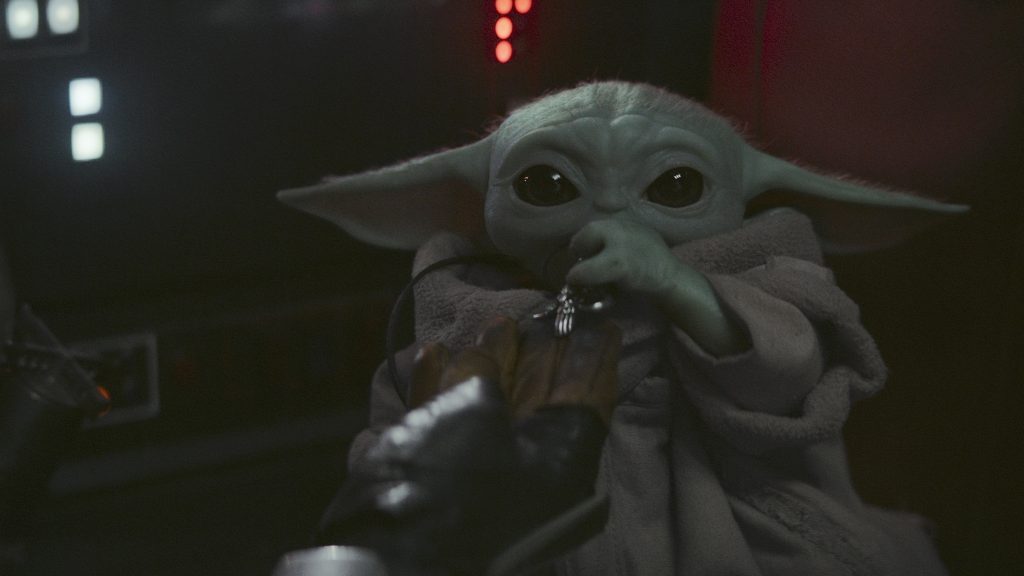 The Mandalorian concludes its first season with nurse droids, pyrotechnics, and a Dave Filoni specialty. Our review of  “Redemption” right after we make the baby do the magic hand thing…

John, Lacey, and James are going to have plenty to talk about on “The Mando Fan Show“, so be sure to give that a listen when the episode drops tonight.

Wow. There is a lot to love in the conclusion of The Mandalorian. Taika Waititi delivers one of the best episodes of the season and proves himself a welcome addition to the Star Wars universe both on and offscreen. Although written by series creator Jon Favreau, Waititi’s humor is put on display throughout the episode. Most notably in the opening scene between the two scout troopers who were last seen plucking Baby Yoda off the ground in the closing moments of Chapter Seven. Fans of the fan-made parody Troops will find a lot to love in these first few minutes and that lightheartedness in the dialogue continues throughout the 47 minute runtime – even when things begin to get a bit more grim. 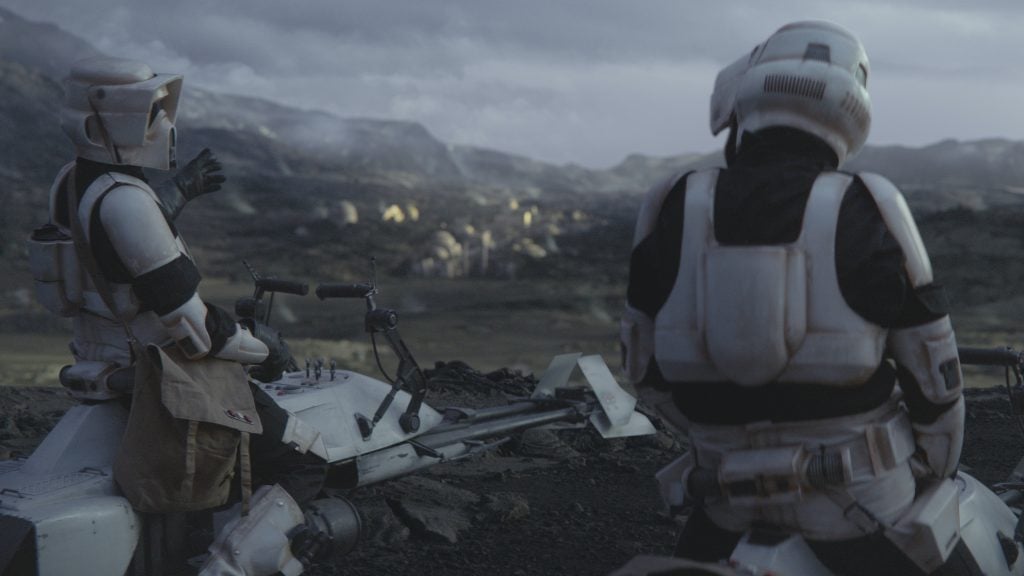 Before we dive into spoilers for the episode, special consideration must be given to Giancarlo Esposito’s welcome addition to the cast. His Moff Gideon made quite an impression last week when he landed his foldable TIE alongside a battalion of Storm and Death Troopers but this week he truly revels in playing the foil to our heroes. Much as with his portrayal of Gus Fring on Breaking Bad, Esposito’s menace lurks in his character’s quiet calmness. The Moff is precise, unrelenting and almost polite in his dealings – nary a raised voice or shouted threat – and that confidence plays well against Mando and company.

“Redemption” is exciting and bittersweet, the perfect cap to a fantastic first season, and a frustrating reminder that we’ll most likely have a long wait ahead until season two. Good thing we’ll have plenty to talk about.

If you haven’t seen Chapter Eight yet, you might want to skip this next section as we dive into spoiler territory and complete our base protocol…Spoilers Ahead:

Alright, let’s get this out of the way first. If you were hoping to see Boba Fett – you’re going to be disappointed. Our OG Mando doesn’t make any appearances in this episode nor do we get a conclusion as to who or what may have been lurking in the shadows of Tatooine. It’s a bit of a bummer given how long we’ll need to wait for any kind of answer what was happening in that scene but Chapter Eight more than delivers in plenty of other departments.

Where to begin? Let’s start with our titular hero. The Mandalorian. Or, as we come to know him in this episode: Dyn Jarren. Not only does our Mando get a name this episode: he gets a face. Pedro Pascal makes his first true on-screen appearance when IG-11 removes his helmet to administer a bacta spray to our injured hero. But that’s not all! We get an origin story – Mandalores saved young Dyn after his parents’ murder – and our boy earns his signet from The Armorer. On top of all that, he even makes nice with the aforementioned droid who saved his life and it’s possible he just might be coming around on artificial intelligence after all. 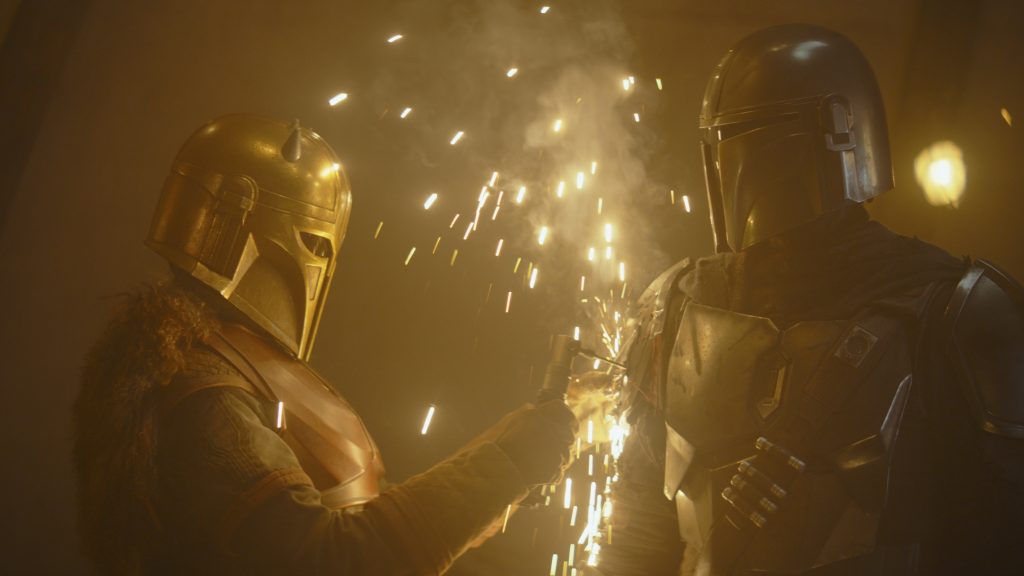 IG-11. Just when we were shocked to discover that he’d been reprogrammed by Kuiil last episode, we lose both creation and creator in the span of two weeks. Sacrificing his life so that his prime directive of protecting the Child can be complete, IG takes a page right out of Dante’s Peak and hops into the lava to clear the path ahead. He manages to take a squadron of troopers with him and finally gets to use that thermal detonator he was hankering to blow up all the way back in Chapter One. As for the Ugnaught, Mando gives him a proper burial before departing the planet – however, jury’s still out on the whereabouts of the remaining Blurrgs. 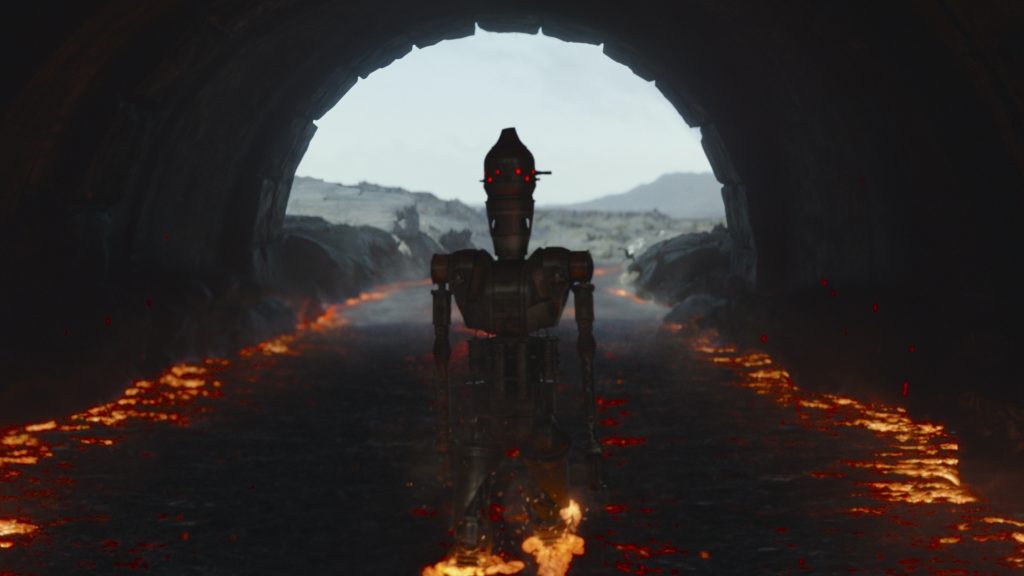 Cara Dune. From Alderaan! Moff Gideon did his homework on the trio and it seems our favorite ex-shocktrooper hails from a planet known for raising rebels. In a somewhat disappointing turn of events, Cara chooses to remain behind with Greef Carga instead of accompany Mando – er, Dyn – through space on another grand adventure. It’s an unfortunate setback after last week finally assembled our team of supporting players – only for two of them to go to the grave and the other two to opt out of playing nanny to Baby Yoda. 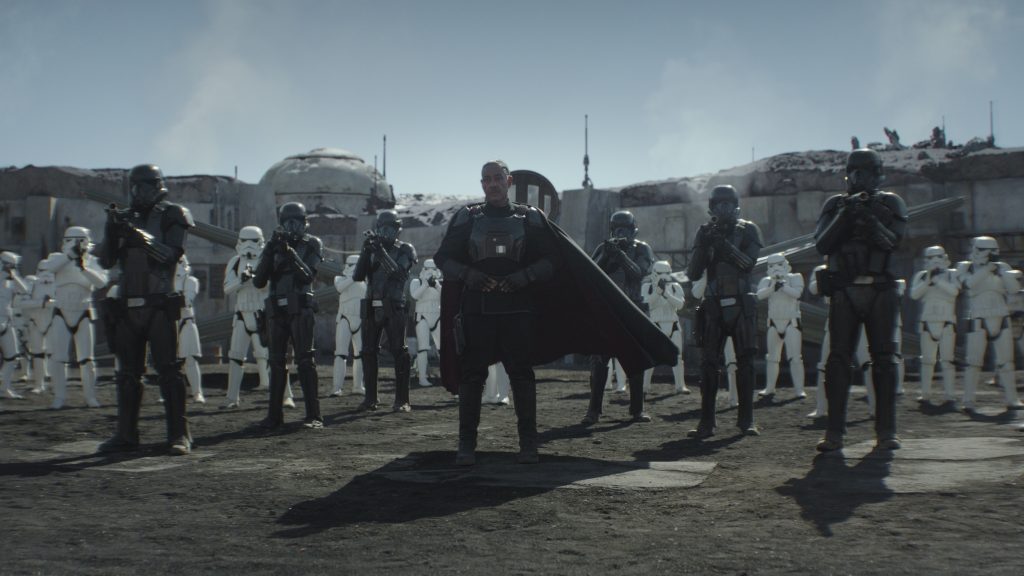 Ah, Baby Yoda. After seeing our adorable pound of green wrinkles get punched by Jason Sudeikis and Adam Pally’s scout troopers in the opening, karmic justice was needed. And it was delivered in the form of a giant fireball. Trapped in the blown-out cantina, our heroes were looking down the barrel of a Flametrooper when the Child raised its hands, concentrated real hard, and used the Force to create a fiery blowback. Let that be a lesson for anyone who thinks to lay a hand on its bald green head: the Force is strong with this one. The second season is bound to be strong with this one as well. While hiding out with the Armorer, the next season is spelled out pretty clear for us: Dyn is now Daddy to the Baby. But fatherhood comes with responsibilities: he’s been tasked with returning Baby Yoda to those that can properly take care of him. While this is left ambitious as to whether that means species of the Jedi “sorcerers”, it’s a safe bet that we are on track to learn much more about everyone’s favorite meme.

But let’s talk about that ending. Did you feel deprived of seeing Jyn Erso face down a TIE fighter when reshoots changed the Rogue One trailer scene? Well, we’ve got just the scene for you! As recompense, Jyn doing his very best Rocketeer impression after being gifted his very own jet pack and takes on Moff Gideon in hand-to-TIE combat above Navarro. Taking down the Moff with a few well placed bombs, Mando doesn’t bother checking for a body as he checks out of the planet. Unfortunately for him, Moff Gideon remembered to buckle his seatbelt and survived the crash landing. But that’s not all. No, no. The Moff doesn’t just pop open the hood and limp away. He CUTS THROUGH THE HULL and emerges with a – and here’s where it gets really good – a freaking DARKSABER. Last seen in the possession of Bo-Katan Kryze, it’s now being wielded by Imperial Moff Gideon. And he’s mad as hell. 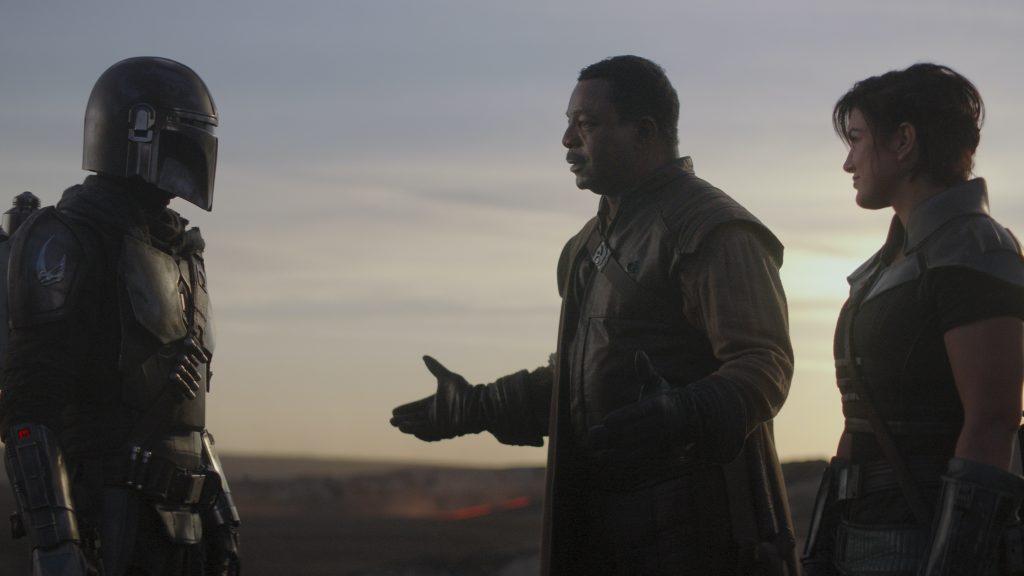 It’s going to be a long wait until season two hits Disney+ next year but in the meantime, there’s plenty for us to discuss and debate. Sound off in the comments on how you think Gideon came to acquire such a weapon and let us know what you thought of the episode as a finale. Did it leave you satisfied? Lacking? Wanting more? With both The Mandalorian and The Rise of Skywalker coming to an end this week, what are you most looking forward to next? 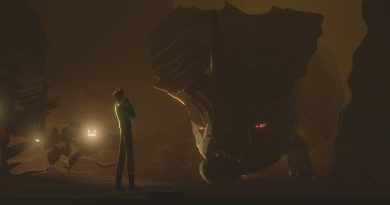 Star Wars Resistance: New Images and a Clip From Sunday’s Upcoming Episode “From Beneath” 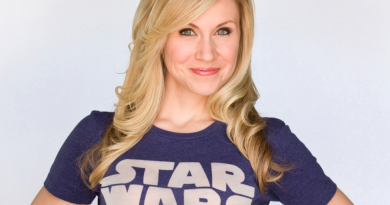