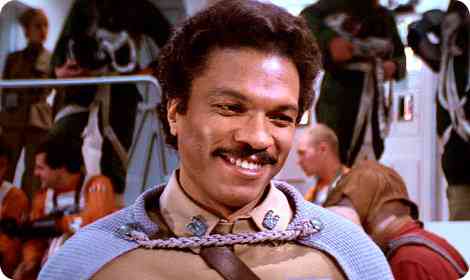 Hello, what have we here? A new scoop from THR strongly indicates that Billy Dee Williams will be reprising his role as Lando Calrissian in Star Wars Episode IX.

The Hollywood Reporter has just broken the scoop that Williams will indeed be appearing in Episode IX as Lando Calrissian. Though the character has sat out the previous two installments of the Sequel Trilogy, Lando will be returning for the final chapter. Recently, a considerable amount of evidence surfaced suggesting that Williams was preparing for the role, but now it appears to be as official as it can get until Lucasfilm issue a press release about the film’s cast.

Aside from Williams, the confirmed cast for the ninth installment in the Star Wars Saga is made up of Daisy Ridley as Rey, Adam Driver as Kylo Ren (Ben Solo), John Boyega as Finn (FN-2187), Oscar Isaac as Poe Dameron, Anthony Daniels as C-3PO, and Joonas Suotamo as Chewbacca. Keri Russell is in talks to join the cast as an as-of-yet unnamed new character, apparently one of three new roles for the film. Among the cast members unconfirmed to return at this time are Jimmy Vee as R2-D2 (the droid will surely return, but it’s not known if Vee will be operating it), Kelly Marie Tran as Rose Tico, Benicio Del Toro as “DJ”, and Domhnall Gleeson as Armitage Hux, along with Gwendoline Christie as Captain Phasma and Andy Serkis as Supreme Leader Snoke, both of whom are either presumed dead or confirmed dead respectively at the end of The Last Jedi.

Mark Hamill has previously indicated that he was set to be involved with Episode IX as Luke Skywalker back when Colin Trevorrow was involved, but has remained largely silent about his potential involvement in the story going forward once J. J. Abrams took over. Recently, Hamill shared social media information in tandem with John Boyega, suggesting that he is indeed going to be a part of this movie. Carrie Fisher did not film anything for Episode IX prior to her death, and as such, her likeness will not be appearing in the film – either through repurposed archived footage or a digital recreation of the actress, according to Lucasfilm.

With news of Star Wars casting surfacing rapidly, it seems likely that Lucasfilm will issue an official press release revealing all of the film’s major players in the near future. Stay tuned to Star Wars News Net for news as it breaks.