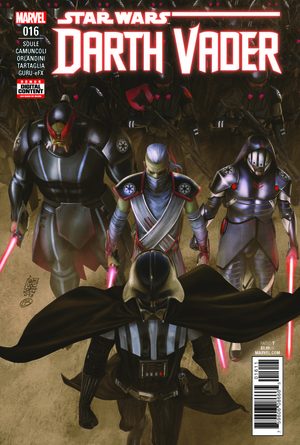 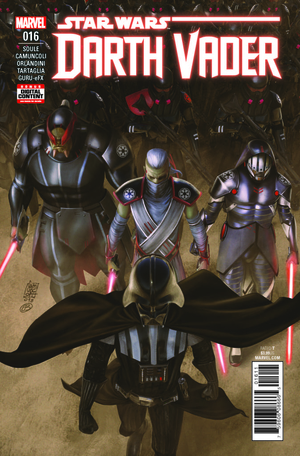 Vader and his Inquisitors lead an elite squad of clone troopers to flush out the Jedi traitor beneath the waters of Mon Cala… and the oceans will burn with their fury.

When we left Mon Cala in the last issue, king Lee-Char had been saved by his people, Tarkin had cleaned up the Imperial lines and Vader and the Inquisitors were rushing towards the location of a hidden Jedi and his followers.

When this issue opens, alarmed by Lee-Char’s warning, Master Barr orders the evacuation of his followers. He also orders his droid, Endee (ND), to self-destruct after creating a copy of all his files. Barr continues to be shady: when asked by one of his followers if they should stay and help the attacked planet, he answers that their work on Mon Cala is done. He plans for them to continue the same work elsewhere in the galaxy. Basically, Barr and his followers act as agitators, instigating rebellion and then leaving the people they stirred up behind to fight the battle. 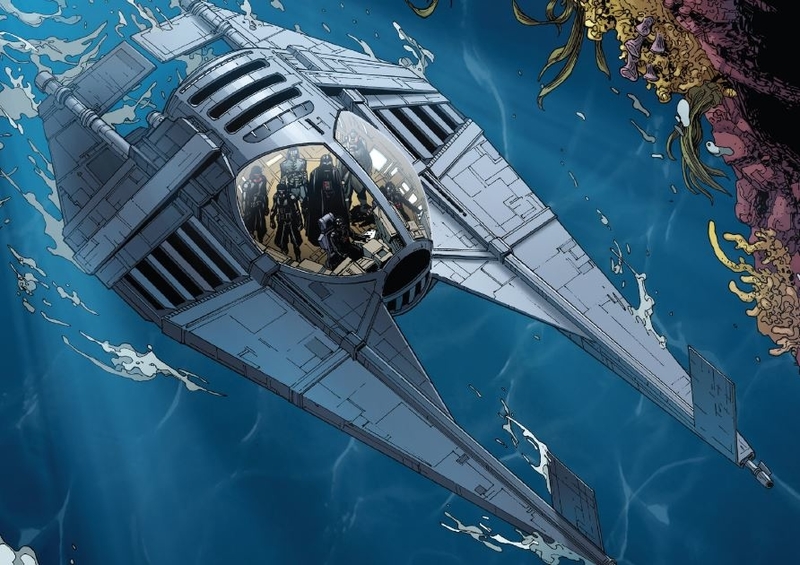 Unfortunately, they are too late. Vader and the Inquisitors intercept them while they are trying to reach the nearby settlement. As some of Barr’s followers are killed by Vader and others sacrifice themselves to help others escape, in a series of flashbacks we see the reasons they joined Barr. Nipaltoo lost his sister to Jedi pogrom, Orvek lost his home, and Stell and Rebb refused to raise their children in the galaxy controlled by the Empire.

Back on board the Sovereign, Tarkin is reviewing the effects of additional forces he sent to the planet’s surface. While the Empire is winning, there are too many engagements that last for too long: Mon Calamari and Quarren soldiers either hole up in their underwater cities, funneling Imperial troops to their death, or scatter abroad, splitting up the Imperial forces . Additionally, on the South Pole, Raddus has linked all Mon Calamari merchant ships (equipped for hyperspace travel and fighting with pirates) so that Tarkin’s forces cannot make a dent in his defense. 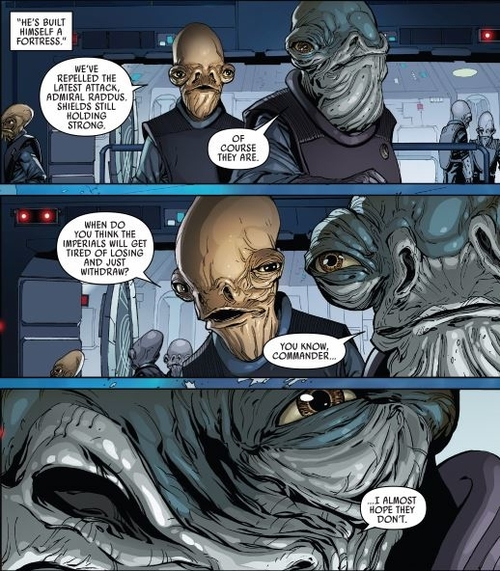 Instead of continuing to waste his forces, Tarkin contacts Vader who is closing in on the escaped Jedi. He requests that Vader leave the hunting of the Jedi to the Inquisitors and go after King Lee-Char in effort to prevent prolonged conflict and fulfill the Emperor’s orders for a quick victory. He does not have the authority to order Vader, so he is asks him as a personal favor which will put him in Vader’s debt. Vader accepts, leaving the Inquisitors in charge.

Barr and the last two survivors, Daren and Verla, are backed into a corner. As the Inquisitors murder Daren, we learn his story which is quite ironic all things considered.

Barr recognizes the Inquisitors as former Jedi and they him as a former padawan who never became a fully fledged Jedi. If one of the name Barr mentions is familiar to you, that is because you have heard it before. The Tenth Brother a.k.a. Prosset Dibs was a Jedi Master disillusioned with the Jedi Order who confronted Mace Windu in the comic mini-series Star Wars: Jedi of the Republic – Mace Windu.  While he was put on trial, he was granted mercy. Clearly, his misgivings had made him vulnerable to the Dark Side.

Barr had not wasted his time since the destruction of the Jedi Order. He had been studying the past, especially the role of the clones in the fall of Jedi. The ones following Vader and the Inquisitors are young, from the last batch and woken up after the purge. As he tells the Tenth Brother, past, history, and truth matter. He attempts to turn them on the Inquisitors in the most ingenious way. 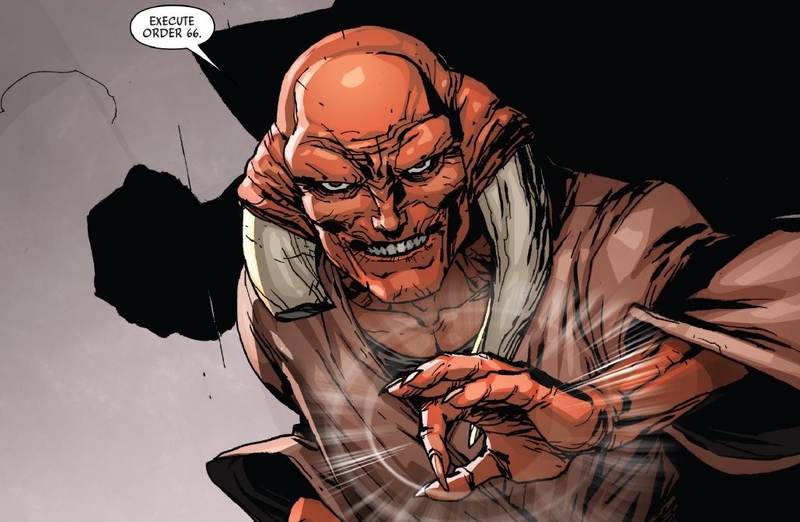 The Darth Vader comic run by Soule and Camuncoli continues to impress. Just when you think that they cannot surpass themselves, they do. Not only does Soule manage to give us compelling backgrounds for the characters that are basically canon fodder, but he also forwards the stories of the major characters by showing us Raddus’ military genius and the beginnings of the relationship between Vader and Tarkin. On the same note, Camuncoli steps up his already impressive game. Whether the underwater scenes, the flashbacks, facial expressions or cool armor, his art is exceptional. It is also strongly supported by coloring by Java Tataglia and Guru-eFX. If that cover doesn’t impress you, you are blind.

It seems that the Inquisitors have inherited the arrogance from their past lives as the Jedi. Confident in the Dark Side and their numbers, they never see Barr’s tactic. On the other hand, I’ve been harping on and on about the shadiness of Master Barr, but having discovered that he was only a padawan at the time of the Jedi purge, I understand him better. You only have to look at Kanan’s story to understand how it was to be left alone, rudderless, and hunted when the Jedi Order perished. Farren Barr made a decision not to hide, but actively take his destiny into his own hands – even if not all his methods are pure as snow.

I particularly enjoyed the description of Mon Calamari tactics and the glimpse into Raddus’ personality. That was the man we’ve met in Rogue One and the man that will probably take the Mon Calamari fleet into space in the next issue.

I cannot recommend this comic strongly enough. This entire run, from the beginning to the end, is exceptional. If you are not into comics, this one might be your gateway drug. The first two trade paperbacks are already out, so I recommend you pick them up, especially if you cannot keep up with individual issues.

Whether Barr defeats the Inquisitors or not, he will have to face a much harder opponent judging by the cover of… 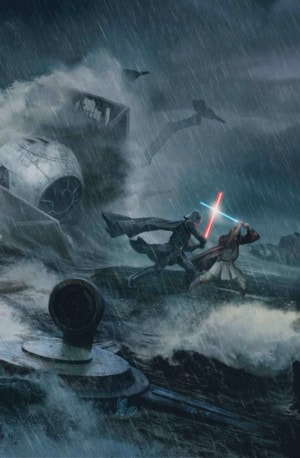 As the remnants of the Mon Cala resistance crumble into the seas, Vader and his Inquisitors finally confront the Jedi survivor at its core. The seas will weep…

UNTIL THEN, THIS ISSUE GETS 8/10 STARS 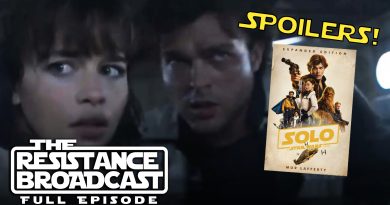 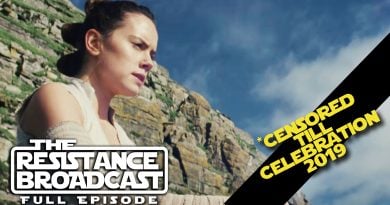 The Resistance Broadcast – Will We See Rey’s New Lightsaber Before Episode IX Opens? 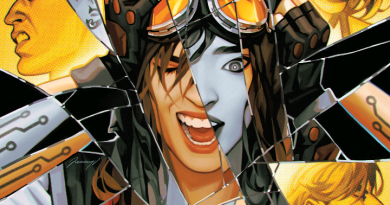 Review: Aphra Gets a Taste of Her Own Medicine in Marvel’s Star Wars – Doctor Aphra #3