Star Wars: The Storms of Crait Lead Us Closer to the Events of The Empire Strikes Back - Star Wars News Net Go To Top
Skip to content

Star Wars: The Storms of Crait Lead Us Closer to the Events of The Empire Strikes Back 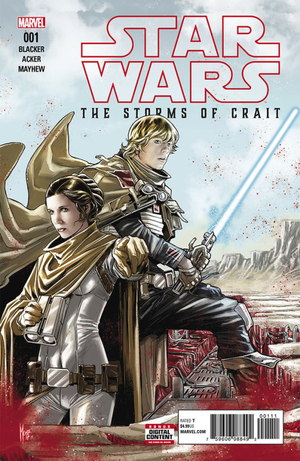 Long before it became a battleground between the Resistance and the First Order, Luke Skywalker and Leia Organa led the Rebellion there in search of a new home!

Set after the destruction of the first Death Star and before the establishment of the base on Hoth in The Empire Strikes Back, so pretty much in line with the current main Star Wars run, Storms of Crait depicts a mission taken by Leia, Luke, Han, Chewie and, surprisingly, Wedge to explore planet Crait as their potential new home.

Let me start unusually for me – with the gripes. In Claudia Gray’s novel Leia: Princess of Alderaan, Leia found her way to Crait and discovered that her parents were secretly organizing the rebellion against the Empire. She knew about Crait, she visited it, and yet in this comic she behaves as if that never happened. She tells Mon Mothma that her father’s friend Trusk Berinato told her that Crait could be perfect for Rebellion’s needs. The Story Group obviously missed this contradiction. It is not a big deal, really, but it truly annoyed me.

The second thing, and I’m beginning to repeat myself, is art. Mike Mayhew is of similar school as Salvador Larocca, using photographs as reference and producing a very realistic art – though more dynamic and lifelike. His characters aren’t as wooden as Larocca’s and they didn’t me pull out of the comic. What did was inconsistency or lack of thereof. While Luke Skywalker or Wedge, for example, looked in some panels like young Hamil and Denis Lawson will spring out of the comic pages, in the others they were almost unrecognizable. That pulled me out of the comic. However, there are things Mayhew excels at, more about that later. 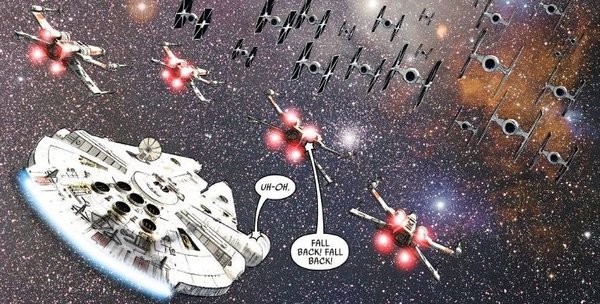 When the issue opens, the writers throw us in the middle of the space battle and a banter session between Han, Luke and Leia. The Rebels have clearly been looking for a new base for a while, while remaining on the run from the Empire the whole time. You immediately get one of the highlights of the issue – character dynamics and development. Acker and Blacker perfectly capture our heroes who are transitioning in what they would be when we get to the events of The Empire Strikes Back.

After they manage to escape they find their way to Baraan-Fa, a temporary Rebel base, where Leia manages to convince Mon Mothma in her Crait plan. This is another relationship that I liked very much. In a single page we are reminded of the history between Mothma and Bail Organa, Leia’s youth (which we often forget) and her idealism. Like her father, she sees the potential in people hoping that, in the end, they would do the right thing. 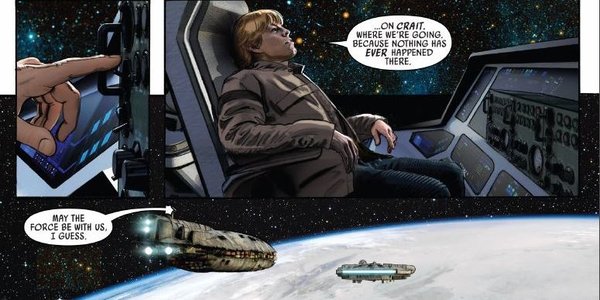 We are also reminded of Luke’s youth. Just because he discovered the Force powers and destroyed the Death Star doesn’t mean he is a completely different person – he is still looking at the horizon and craves adventures. Hauling farming equipment and, later, studying the soil of Crait is exactly what he wanted to run away from. But Luke will learn that being a farm boy has its advantages.

On Crait, Trusk and his droid unit meet with our Rebels. Trusk serves as their guide taking them to the mining compound we see in The Last Jedi. The ski speeders which provided us with one of the most visually stunning scenes in the movie, make their comeback. The blue-skinned alien is showering Leia with respect and praise which immediately raises Han’s hackles.

Luke and Wedge are running the environmental assessment of Crait. We learn that at this point in time there was still life on Crait which slowly died away. After our Rebels are attacked by worms, Luke has a suspicion about why. He discovers that like Tatooine had its sand storms, Crait has the salt storms capable of flash-drying all life. 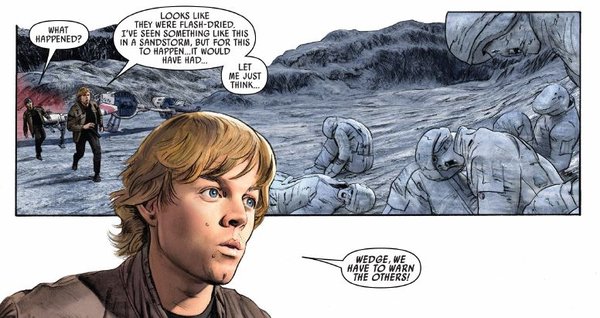 Because deadly salt-storms aren’t apparently enough, Trusk betrays the Rebels to the Empire and the SCAR squadron led by Sergeant Kreel arrives to destroy our heroes. While the others run to the Millennium Falcon to protect Leia, Luke stays behind to keep the SCAR Squadron off of their backs. Luke’s confrontation with Kreel was building ever since the events on Nar Shaddaa and it reaches it’s culmination in this issue. As much as I complained about art at the beginning, Mayhew does very well in drawing action, whether it’s a lightsaber battle or speeder chase. Together with the writers, he provides us with one of the most spectacular Luke’s moments of badassery we have seen. Kreel is also the first teacher Luke outgrows in Star Wars timeline. 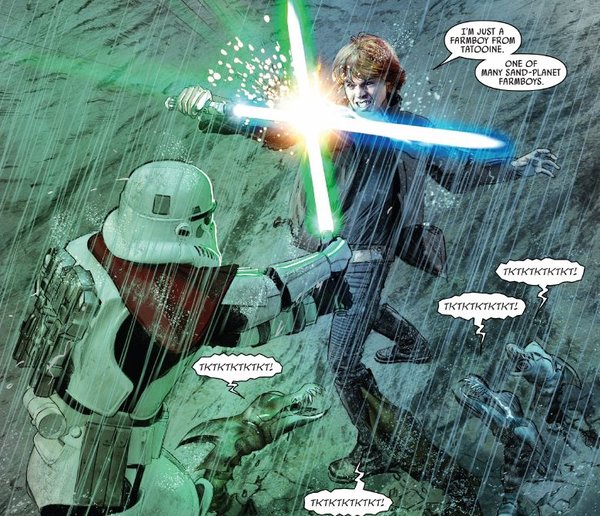 The other Rebels are fighting just as hard against the stormtroopers and other SCAR members. I won’t spoil it here, but Wedge has sort of a Conan the Barbarian moment that made me laugh. It was silly but so Star Wars. 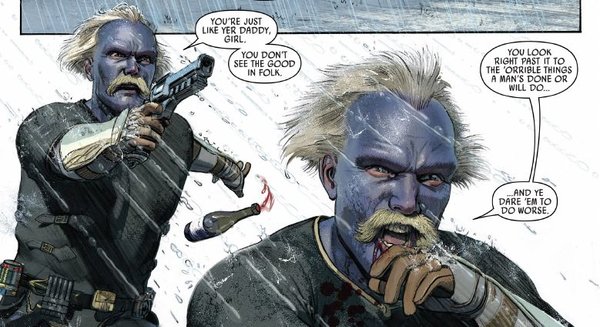 Trusk confronts Leia and Han near the Millennium Falcon and Han tries to distract him but gets shot. We will see this scenario play out similarly in the Return of the Jedi – here Leia uses Han’s blaster to disarm Trusk. They have to leave Crait immediately because nothing will survive the arriving storm (by The Last Jedi, only the vulptices will remain). We learn that SCAR Squadron escaped as well. While Leia’s plan failed, we are left with the sense of growing closeness between our three heroes that will eventually make them not only friends, but a family.

If you were hoping that The Storms of Crait would give you some amazing background on the planet, this isn’t the case and it might not be for you. The few details the story provides aren’t necessary to know and will not in any shape or form influence your experience with The Last Jedi. What we got is a character piece wrapped in an adventure. Our main heroes grow and grow closer. Their pasts inform their current actions, but they also learn to grow past it. The banter between Leia and Han is the closest we have seen to their interaction in The Empire Strikes Back. The group dynamic between our heroes also solidifies in this issue.

We were also treated with some visually appealing actions scenes. The character inconsistency aside, Mayhew used the unique look of Crait to give us some stunning panels.

If I have a major complaint about the issue, it’s the treatment of SCAR Squadron. They were built up to almost legendary status and we have seen them wipe out Rebels with ease over and over again. Yet, they were disposed and sent on their way with tails between the legs like a group of punks. While I can accept that Luke can defeat Kreel in the familiar environment and due to his developing powers, we haven’t seen a single effective action of the remaining members of SCAR Squadron. That I find hard to accept. Maybe Vader was right about them after all.

I found it hard to rate this issue. On one side, it’s a story that could have happened on any planet and it would have remained the same. The inconsistencies with the canon and art were also troubling. On the other hand, I truly enjoyed character dynamic and growth and enjoyed that part of the issue immensely. 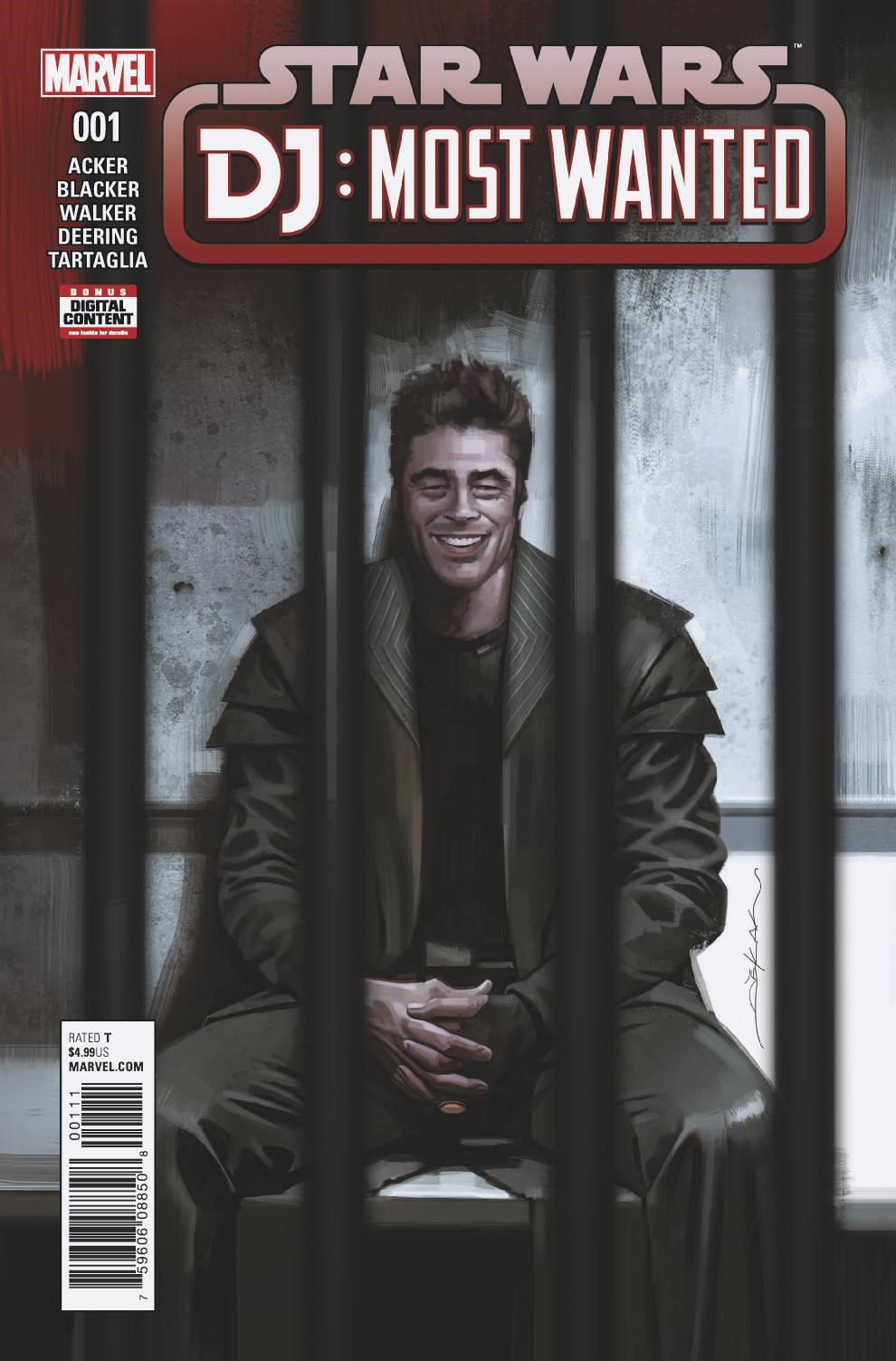 When STAR WARS: THE LAST JEDI takes theaters in FORCE (get it?) this December, Star Wars fans will get a peek into some new dark corners of the Galaxy Far Away…and out of one of those corners scuttles DJ, the mysterious character played by Benecio Del Toro! Who is this mystery man, and what put him in the path of our Resistance heroes? Join Ben Acker & Ben Blacker (Star Wars Join the Resistance, Star Wars: The Last Jedi – The Storms of Crait) and Kev Walker (Star Wars: Doctor Aphra, Darkhawk) as they reveal a day in DJ’s life just before his appearance in the film!