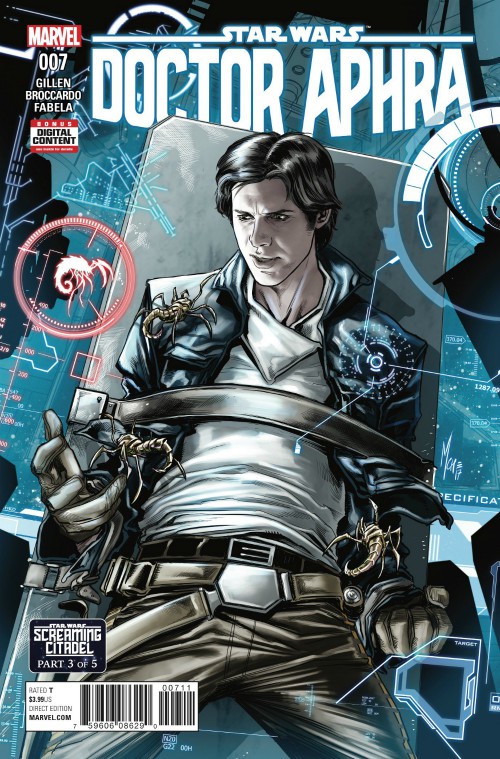 When we left Luke and Aphra in the last issue, they were on the run from the Queen’s monsters as Han, Leia and Sana have come to the rescue, thinking Luke was kidnapped by the infamous archaeologist.

As this issue opens, Luke valiantly offers to hold the monsters off, but the Rebels arrive using Aphra’s ship. We learn that Sana is a woman of few words when she simply chooses to shoot Aphra on sight. Talk about ‘woman scorned’.

In spite of discovering the Force and blowing up the Death Star, Luke is still very much that naïve farm boy we know from A New Hope. He not only defends Aphra, but declares her his friend – much to the dissatisfaction of Leia and Sana and to the utter confusion of the rogue archeologist. 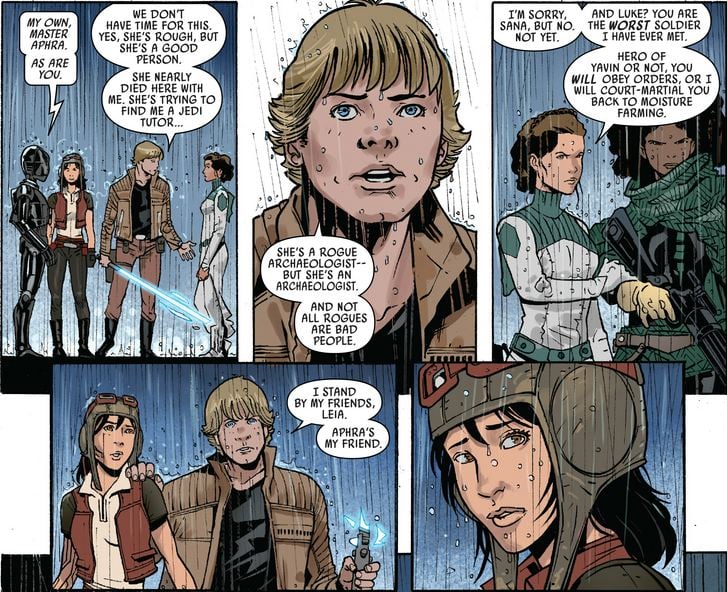 The group is forced to flee the Queen’s posse and barricade themselves in the laboratory with Abersyn symbiotes, a species that feeds on the brains of sentient species and which is responsible for the fall of many civilizations. Aphra explains that the symbiote is so dangerous that even the Empire doesn’t dare try to weaponize them.

While checking if all the exits are sealed, Luke questions why Aphra would be on the side of the Empire. She explains that her mother was killed during the Clone Wars and that although the Empire isn’t perfect, it keeps people safe. For ordinary people, any peace is better than war. Luke reiterates that Aphra really is like Han and not that bad underneath. Aphra, on the other hand, believes that Luke has lead a sheltered life, until he reveals to her that Empire killed his family. 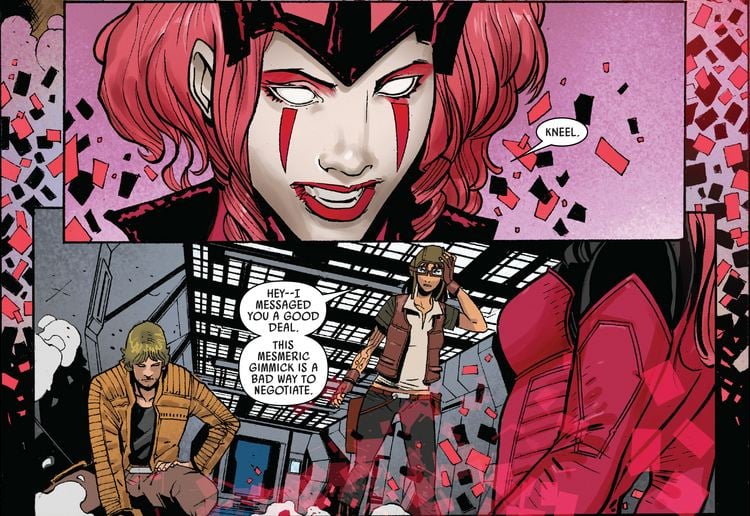 Unfortunately for Aphra and Luke, the Queen of Ktath’atn and her cohorts are waiting for them on the other side of the door. She succeeds in hypnotizing Luke, but Aphra has protective goggles. She threatens to blow Luke up if the Queen tries to double-cross her again. The Queen agrees to reactivate Aphra’s crystal but orders for the others to be killed. Relying on his blaster, Han attempts to shoot the Queen, but he is hypnotized as well. 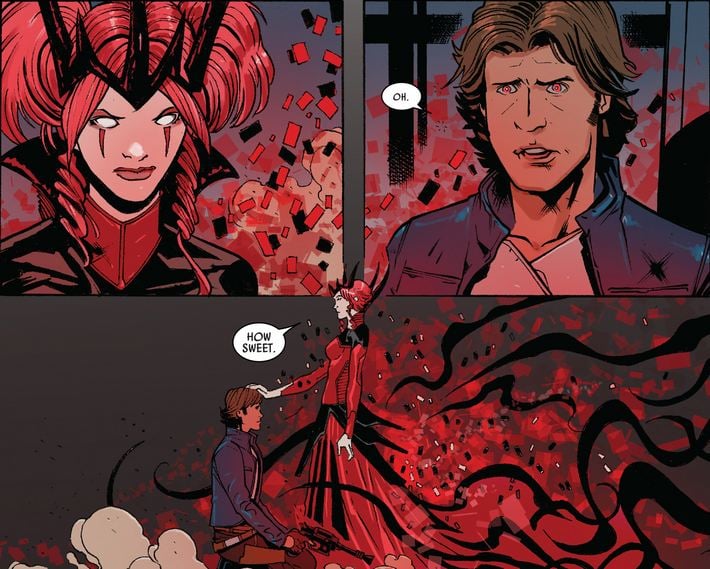 At Aphra’s urging, Leia, Sana and the murder-bots escape, but not before Triple Zero has an idea. Outside the Citadel, they see Black Krrsantan being tortured by one of the Queen’s sentinels. They manage to fight him off for a time and bring the Wookiee on the ship where Triple Zero implants a symbiote in him, while at the same time psychoanalyzing Leia and her relationship with her friends.

The Queen’s guard manages to break into the ship where he is met by a transformed Krrsantan. Apparently, symbiotes don’t like to be implanted in certain species, which is the reason why Wookiees aren’t allowed into the Citadel. The panel below shows you exactly why that is. 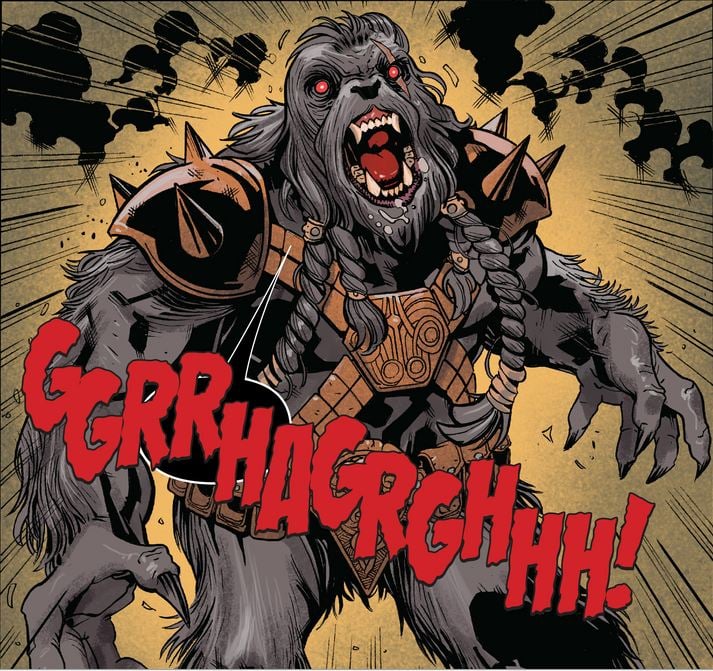 I have to be honest, after seeing the preview for this issue, I was less than enthusiastic. The result isn’t as bad as I thought it would be, but it’s still hit and miss.

What Gillen does really well is the dynamic between Aphra and Luke. They are completely different and yet you cannot take your eyes off the page when they are together on it. It is clear that Luke’s earnestness is slowly affecting Aphra, though she is trying really, really hard to avoid it. I am really enjoying this aspect of the comic, and I think it was a great decision to pair these two up. Additionally, Sana’s presence and their history together also have an effect on Aphra – she hides the fact that she used Sana to find the Rebels.

Where Gillen misses, in my humble opinion, is his depiction of Leia. The princess always had the take charge attitude, but she was never abrasive and abusive. Apparently, her behavior is sufficient to prompt Triple Zero to compare Luke and Han to himself and BT-1 and point out her dissatisfaction with their actions when they disobey her. Also, the only function Han has played so far in the story is to be captured by the Queen. Hopefully, he will get more to do in the next two issues.

Additionally, I feel that Andrea Broccardo’s art is completely unsuitable for the Gothic horror story Gillen is trying to tell. Don’t get me wrong, I could never draw like this, I just feel that the style doesn’t fit the story. If it didn’t carry negative connotations that I don’t intend, I would call it ‘cartoony’, a style more suitable for an upbeat story. But, keep in mind that the art is subjective, and you might love it.

We are over the half point in the story and while I like the unusual idea overall, I feel the previous issues were better. I do hope that the rest of the story will improve and that we will end on a high note. We will see how that goes in…

•  The Queen’s influence is spreading…
•  Our only hope lies in the kindness of scoundrels. 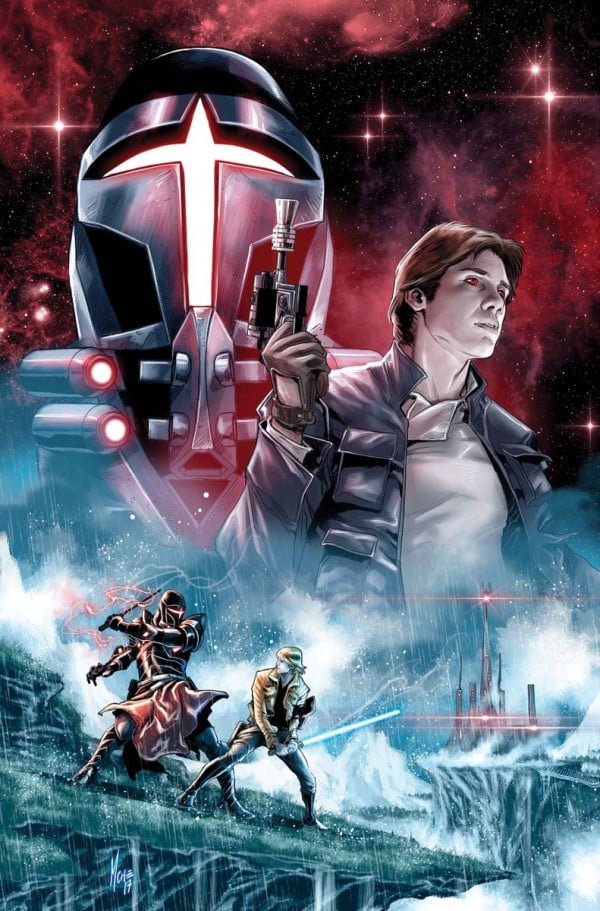