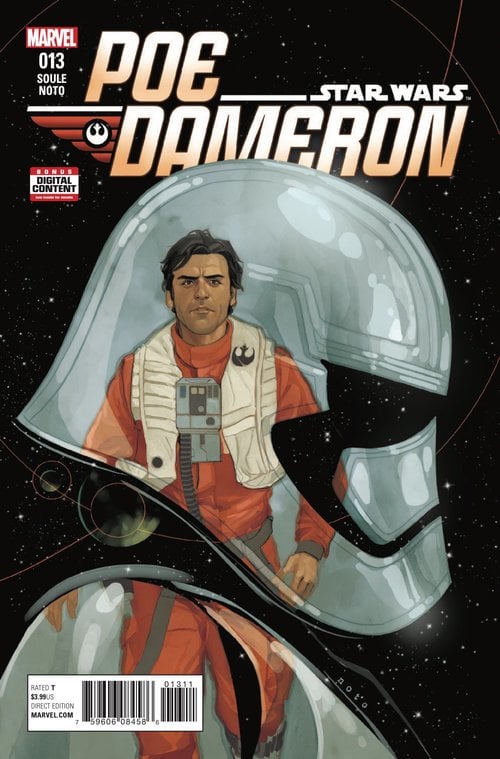 Art and colors by Phil Noto

It’s Terex’s army versus Black Squadron — and Black Squadron is outnumbered! Plus, Poe is stranded with only a battle-reluctant commando droid between him and his enemies. Snap Wexley may have a trick or two up his sleeve to help Black Leader fight!

When we left Poe in the last issue, C-3PO was captured by Terex and his gang and Poe was backed into the corner with Nunzix. His Black Squadron arrived, but they have a might of Terex’s criminal fleet to deal above the planet. 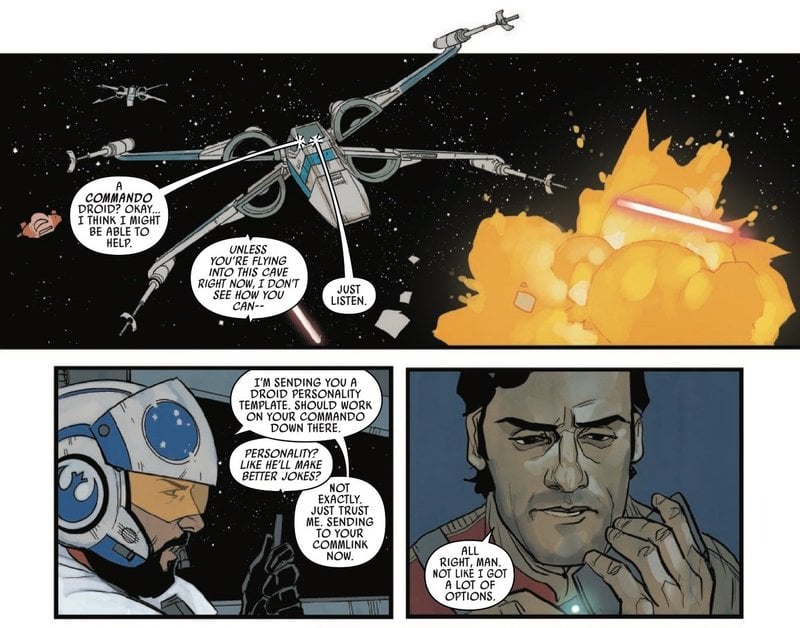 Snap Wexley contacts Poe who explains the situation – BB-8 and C-3PO are gone and he will soon be captured because Nunzix, a commando droid, will not fight. He claims his programming is preventing him. But, Snap has one ace up his sleeve. A droid personality template he always carries with him for good luck. Poe uploads the template into Nunzix and a friendly murder droid comes back! 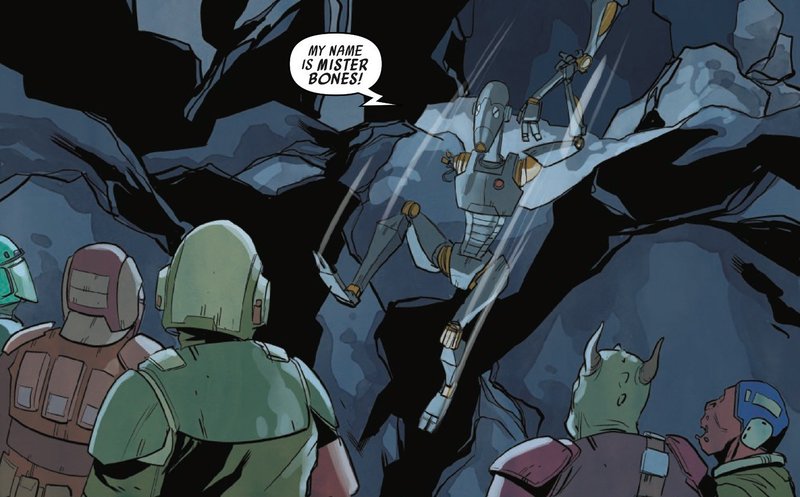 Those who have read Aftermath trilogy are aware of Temmin’s heavily modified B1 battle droid, better known as Mister Bones. For many, he was a standout character of Wendig’s trilogy. Readers, however, also know Mister Bones’ eventual fate which was why creators’ tease about his appearance in this comic during the Star Wars Celebration confused me. Now, we have the answer now: Temmin/Snap might have never rebuilt the beloved droid, but he never really parted with him either.

Above the planet, the Black Squadron’s situation isn’t pretty. Karé is hit and facing three enemy fighters. It seems her fate is sealed. But, as she is saying goodbye to her comrades, all three ships are destroyed – by Carrion Spike.  The crew on board the flagship is locked out the control system. Several escape pods are launched out of the ship – Oddy Muva and the slaves. He sabotaged Carrion Spike’s targeting system to shoot at anything not having a Resistance transponder. The Black Squadron has to protect unarmed escape pods. 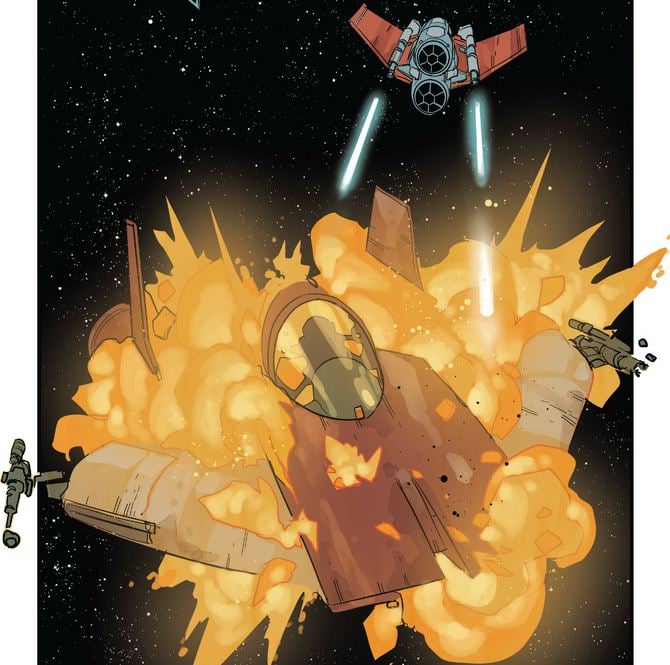 The battle gets heated and Black Squadron manages to take out some of the enemy ships. But, Terex’s army is huge and merciless. They destroy one of the escape pods, angering L’ulo. While the brave Duros destroys some of enemy fighters, he is taken by surprise and killed. The Black Squadron has suffered the first major loss.

Back in the cave, we see the results of Mister Bones’s handy work – Terex’s force is destroyed. Unfortunately, Terex is left standing and he destroys Nunzix/Bones. Poe surprises him, but Terex is too crafty to be taken down easily, he throws a knife wounding Poe. Just when it seems our hero is done for, in a grand tradition of Star Wars, droid comes to the rescue! In a reprise of events we saw a few issues back, battle-scarred BB-8 electrocutes Terex.

Things are really dire for the Black Squadron. Terex’s gang got the Carrion Spike under control. The pilots are, however, determined to go down fighting. The appearance of the First Order seems like their end, until the Star Destroyer doesn’t take Terex’s flagship out. Goodbye, Carrion Spike, thank you for the memories. 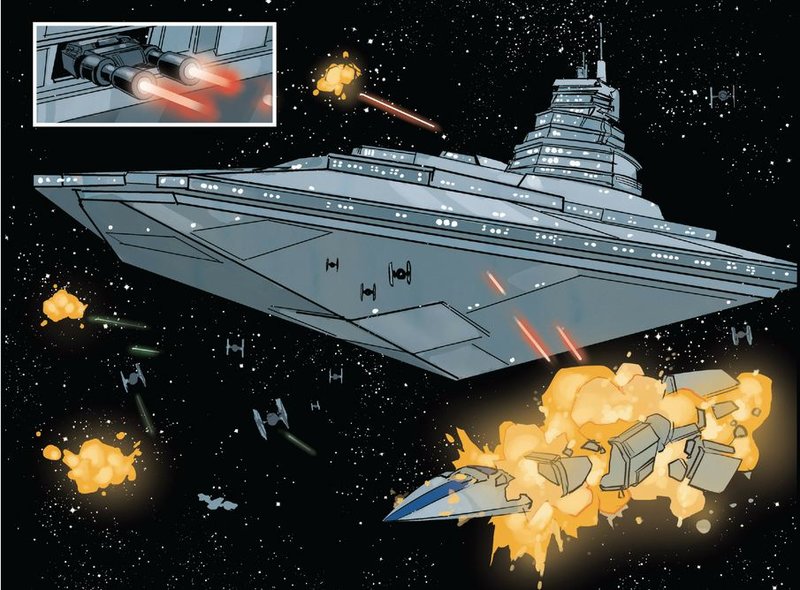 Instead of attacking Black Squadron, the First Order deploys the troops to the planet surface led by Commander Malarus. If we didn’t see Phasma in the previous issues in her armor, I would have sworn Malarus was Phasma. She is a head taller than Poe and blond, like Gwendoline Christie, the actress who plays Phasma in The Force Awakens. Additionally, the previews of the next issue mention Phasma plays the role in it and Malarus appears on the number of variant covers. Is it possible that we see Phasma’s face for the first time in the comic?

Poe points out to her that his people will film everything that happens on the surface. If he dies, that would cause the Republic to go to war. Malarus is apparently happy to satisfy herself with Terex and Poe has no reason not to let her take him, but not before having a few ‘friendly’ words with the nasty agent. He lets Terex hear about the destruction of his fleet. Terex deduces that Poe lost someone too probably hoping to provoke the pilot, but Poe simply drops the mike. 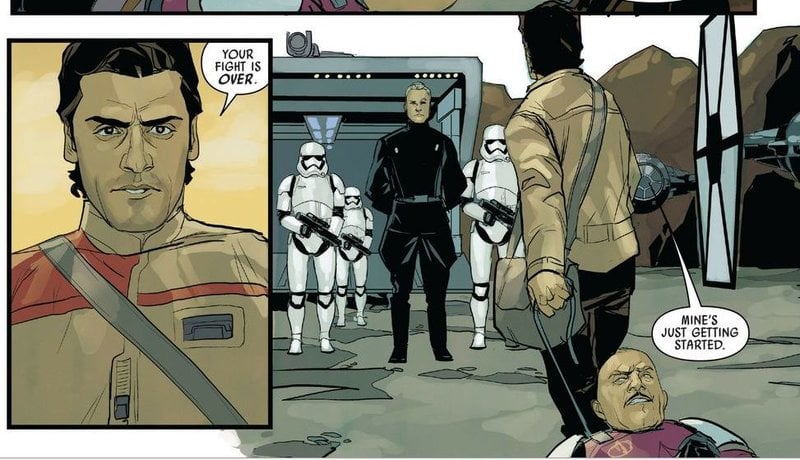 Poe Dameron comic was solid from the beginning but it has really hit its stride in this arc which gave us a tiny insight into galactic circumstances and the First Order itself.  Terex continues to be a great addition to Star Wars villainous family.  With the arrival of the First Order, I was afraid that Terex will meet his end in this issue. He certainly won’t have a good time, but I think we will all enjoy to see how Terex acts when he doesn’t have an upper hand.  Can he verbally spar with his captors as well as he did when he was light-years away? I am also interested to see if my presumption about Phasma is true.

The next issue promises to be emotional as we will attend L’ulo’s funeral, which will also serve as tribute to Carrie Fisher.

There's a funeral in Poe Dameron #14, and Leia's present – writing that scene today. Wasn't originally about her, but now it will be.

We will probably see the fallout of the situation with Oddy whose actions, while noble, endangered the Black Squadron and the entire Resistance.

I am greatly enjoying Soule’s work on this comic and his introduction of new, interesting characters. In this issue he kills off two major characters (kind of, in Mister Bones’ case) and takes another of the board, not to mention the legendary ship previously owned by Tarkin. I was sad to see L’ulo go because I liked him a lot since his first appearance in The Shattered Empire. His connection with Shara Bey, Poe’s mother, adds another dimension to this loss. Noto’s art was beautiful as always but in this issue he especially showed his skill in drawing the space battles.

We are getting closer to the events of The Force Awakens, but there are obviously more stories to tell about Poe, Black Squadron and First Order. If they continue to be as interesting and engaging as the current arc, keep them coming. If you are not reading this comic, The Gathering Storm arc is a great place to start.

For now, salute the fallen and look forward to… 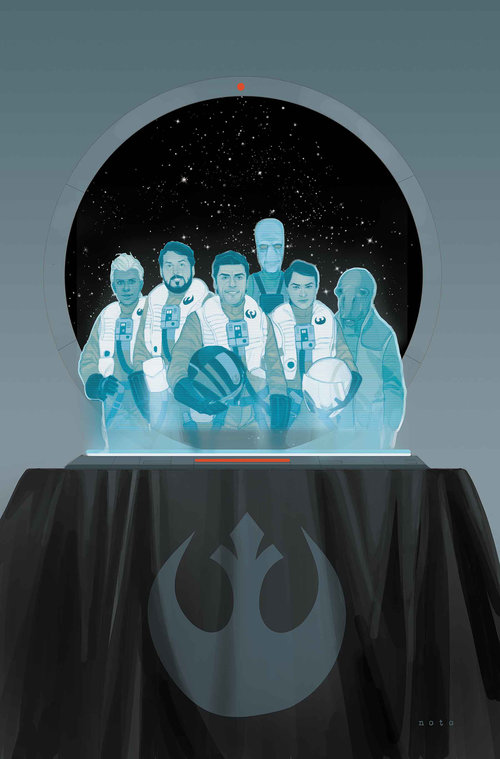 • It is a sad day for the Resistance as they mourn the loss of a fallen comrade.

• But their fight is far from over — the First Order must be stopped!

• And Captain Phasma knows just how to get Terex to toe the line.