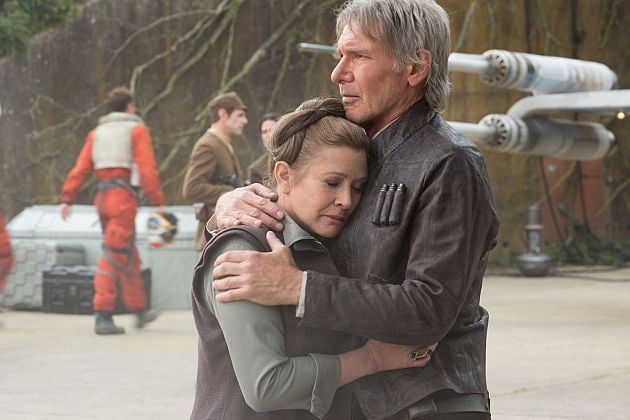 All major discussions of quality aside, fandom has been stuffed to the brim with nitpicks about the force awakens since its release.  Some have been explained by the filmmakers to various degrees of acceptance (like R2-D2’s miraculous awakening) and some have been neglected.  Well, JJ Abrams recently gave a mea culpa on one of these nitpicks in an interview with Slashfilm.

In this case, the nitpick in question is just why Leia hugs Rey after the death of her husband instead of their longtime mutual friend Chewbacca who walks by in the background seemingly ignored by the devastated princess.  JJ Abrams addressed this in the interview.

That was probably one of the mistakes I made in that. My thinking at the time was that Chewbacca, despite the pain he was feeling, was focused on trying to save Finn and getting him taken care of. So I tried to have Chewbacca go off with him and focus on Rey, and then have Rey find Leia and Leia find Rey. The idea being that both of them being strong with the Force and never having met, would know about each other — that Leia would have been told about her beyond what we saw onscreen and Rey of course would have learned about Leia. And that reunion would be a meeting and a reunion all in one, and a sort of commiseration of their mutual loss.

Abrams goes on to admit that it was likely in his blocking that the issue became so apparent, noting that Chewbacca walking by in the background of the scene calls attention to the fact that he is not involved in the solemn moment.  Had he run off to take Finn to get medical assistance without being seen in the background, complaints would likely be far fewer.  But in the end, it doesn’t really change the outcome.  Chewbacca did have other things on his mind, and I wouldn’t see it as out of character for the noble Wookie to put a priority on helping those heroes who could still be saved and waiting to mourn until his work was done.  Although, may it not be forgotten that this was not the first time a Star Wars film ended with Leia snubbing Chewbacca.  Perhaps Leia just has something against walking carpets.