It’s been 12 days since the second teaser for The Force Awakens was shown at Celebration Anaheim by director J.J. Abrams, Kathleen Kennedy and several cast members from the movie. Since then the trailer has been watched by tens of millions and fans around the globe have been analyzing every single frame from the footage trying to uncover missed objects, details and even hidden clues that could hint at something. After the jump we will take a look at several things that you probably have missed from the new teaser, the live panel, and Celebration Anaheim itself.

During the Celebration panel they briefly showed a picture taken during the filming of that particular scene: 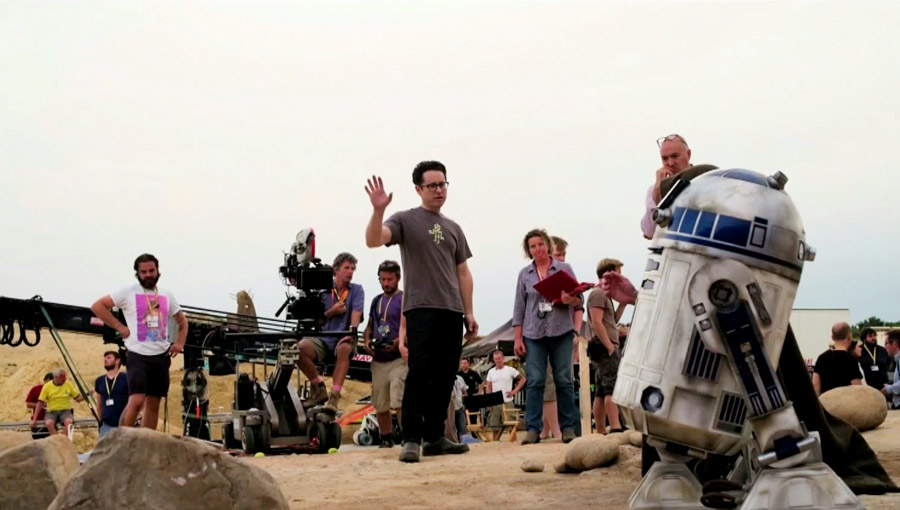 This image actually tells us quite a lot. First of all this image shows you that the scene with Artoo and Luke takes place on Jakku. Probably this is in the beginning of the movie after Kylo Ren and the Stormtroopers torch the local village (as seen in the trailer).

Another thing that this image tells us is that this scene was not shot at Abu Dhabi, but on the Pinewood lot at the UK. You can tell that by cloudy sky, the green trees and buildings in the background and by the crew’s clothing. They are not dressed for an extremely hot weather.

I saw people commenting on the web that the clouded figure is not Luke. I think there are too many facts pointing to the opposite and they are hard to ignore. We know that Luke owns R2-D2, he has a cybernetic right hand, the scene was shot at Pinewood, where Mark Hamill was filming his scenes. Also, let’s not forget that Hamill’s voice over on the teaser says “I have it” on that particular scene.

Even our Cantina member Altgr0160 went on to compared the hand from the image above and Mark Hamill’s hand. Close enough, right? 🙂 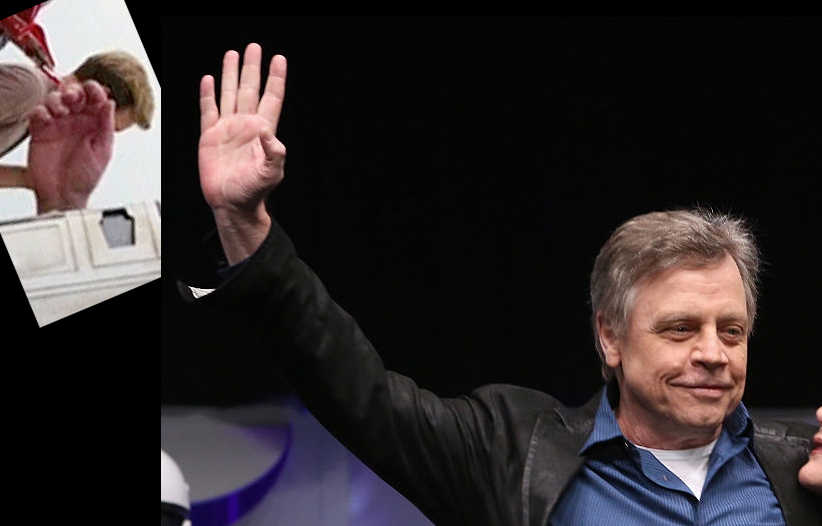 I don’t think there is a conspiracy here and this is indeed Luke, and this is surely not his only scene in the movie.

2. Next is the scene with the alien creature handing a lightsaber to an unknown female: 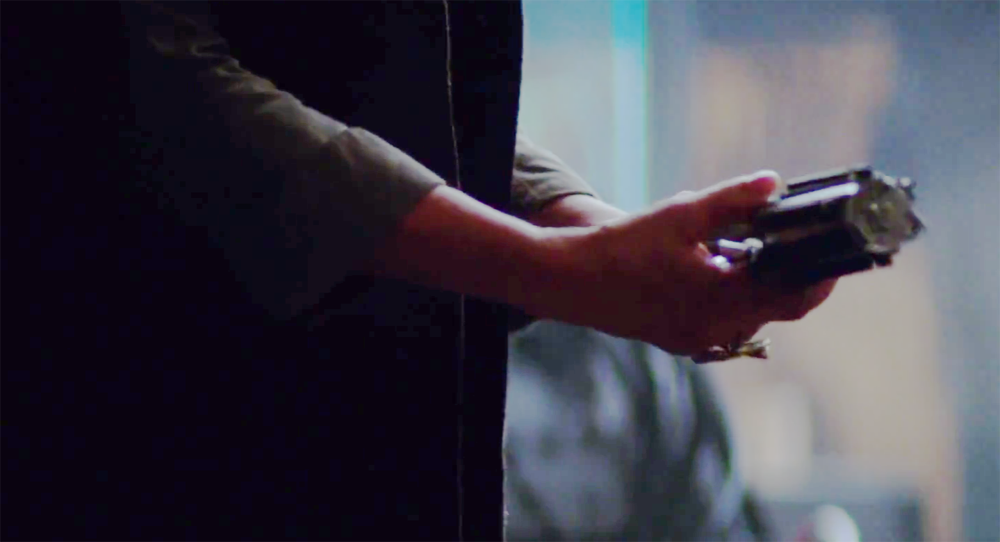 Many people assumed that this female probably is Daisy Ridley. These assumptions were based mainly on some of the rumors that Ridley’s character is given the lightsaber by an alien character played by Lupita Nyong’o. But this is not the case. The character on that image is definitely Princess Leia. Apart from the matching voice over again, the hands also match with Carrie Fisher’s hands.

Also if you brighten the image you will see that this character is wearing a black vest and a grayish shirt – a complete match to Leia’s costume description by MSW: 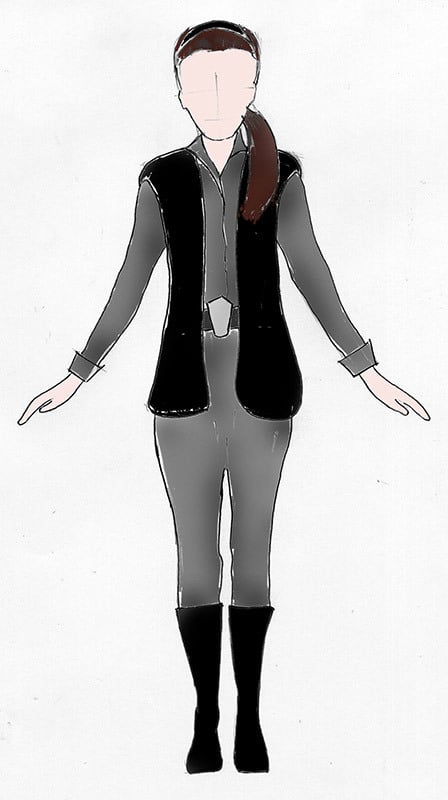 And have you noticed the ring? This is something that a Princess would wear, not a scavenger, right? 🙂

Apart from the regular Stormtroopers this brief scene also gave us a quick glimpse at a big variety of Stormtroopers: 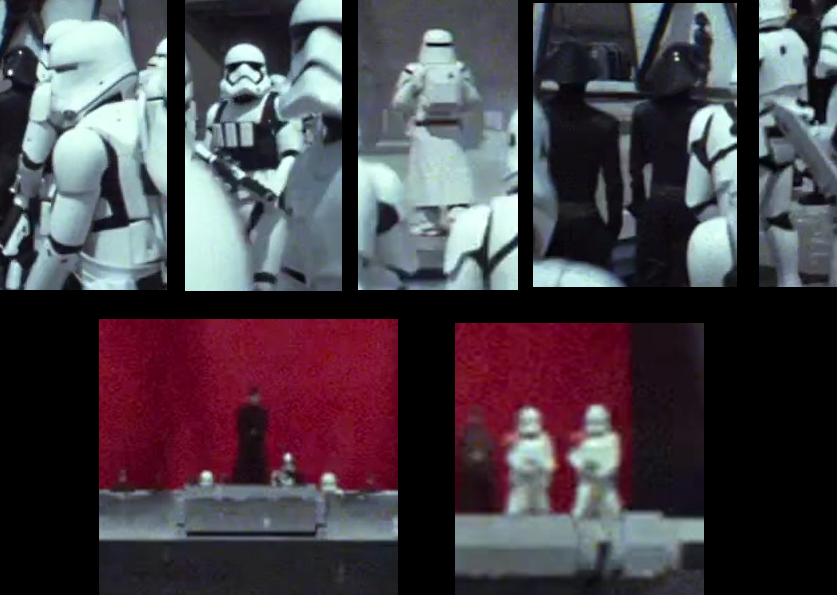 In clockwise order starting from top left: Flametrooper (with fuel tank on his back), Heavytrooper or Bombtrooper (with ammo clips or explosives on his vest), Snowtrooper, Navy trooper (foreground) and TIE Fighter pilots (background), Shieldtrooper (troopers holding shields in their hands), Higher rank Stormtroopers, and the Chrome Trooper Commander (you can even see the cape over the shoulder).

This scene looks more like a military parade, and what if the big structure in the back is actually the Super Weapon (The Catapult) that we’ve told you about before (HERE). It seems that it’s heavily guarded by several cannons and the location looks suitable for such device (surrounded by ice cliffs). What if there is actually something behind that red flag with the First Order symbol? 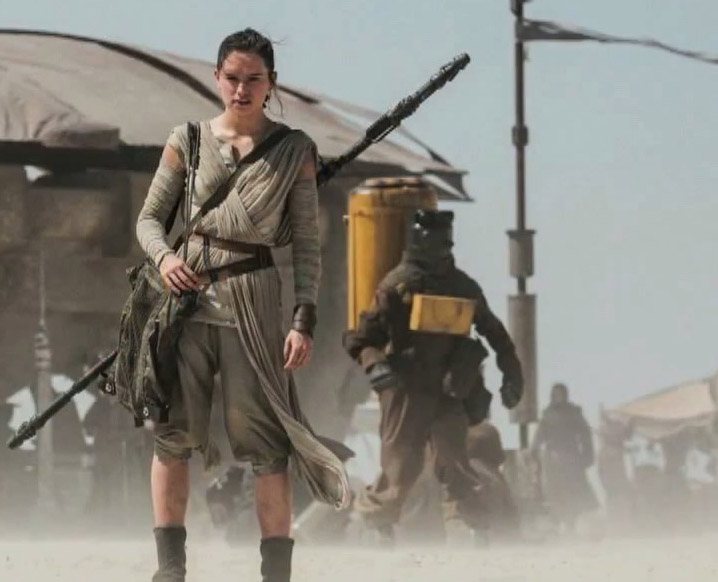 5. And the Gonk droid behind Poe’s black X-Wing: 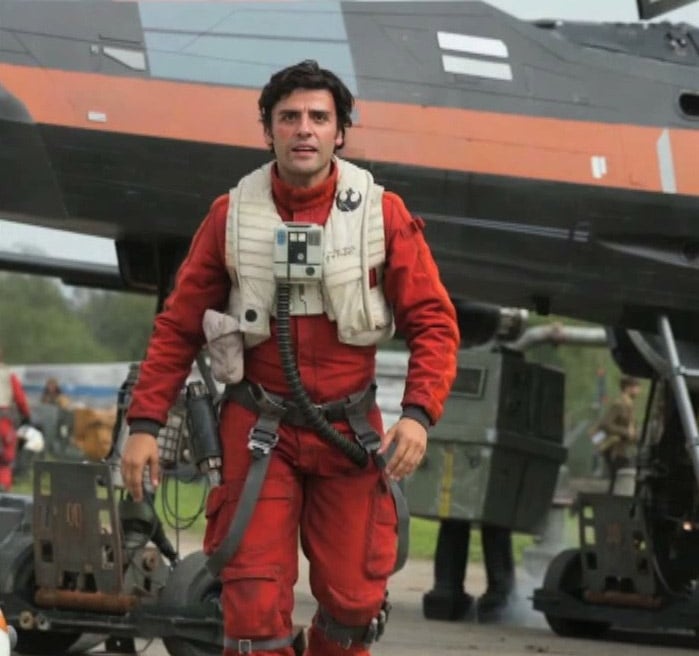 What is Star Wars without its power generators with legs! 🙂

6. Finn getting the jacket he later wears. Did he steal it? 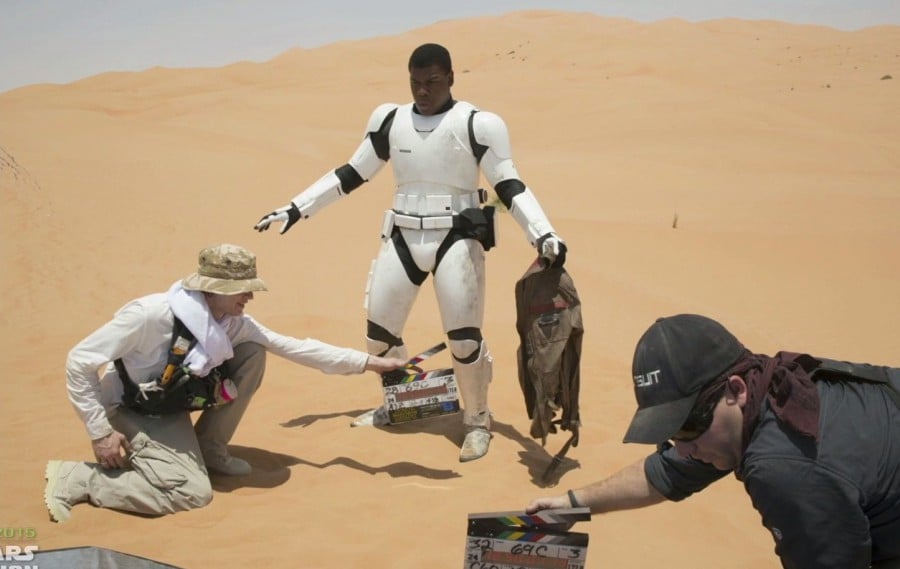 7. Rey and Finn running from a TIE Fighter attack: 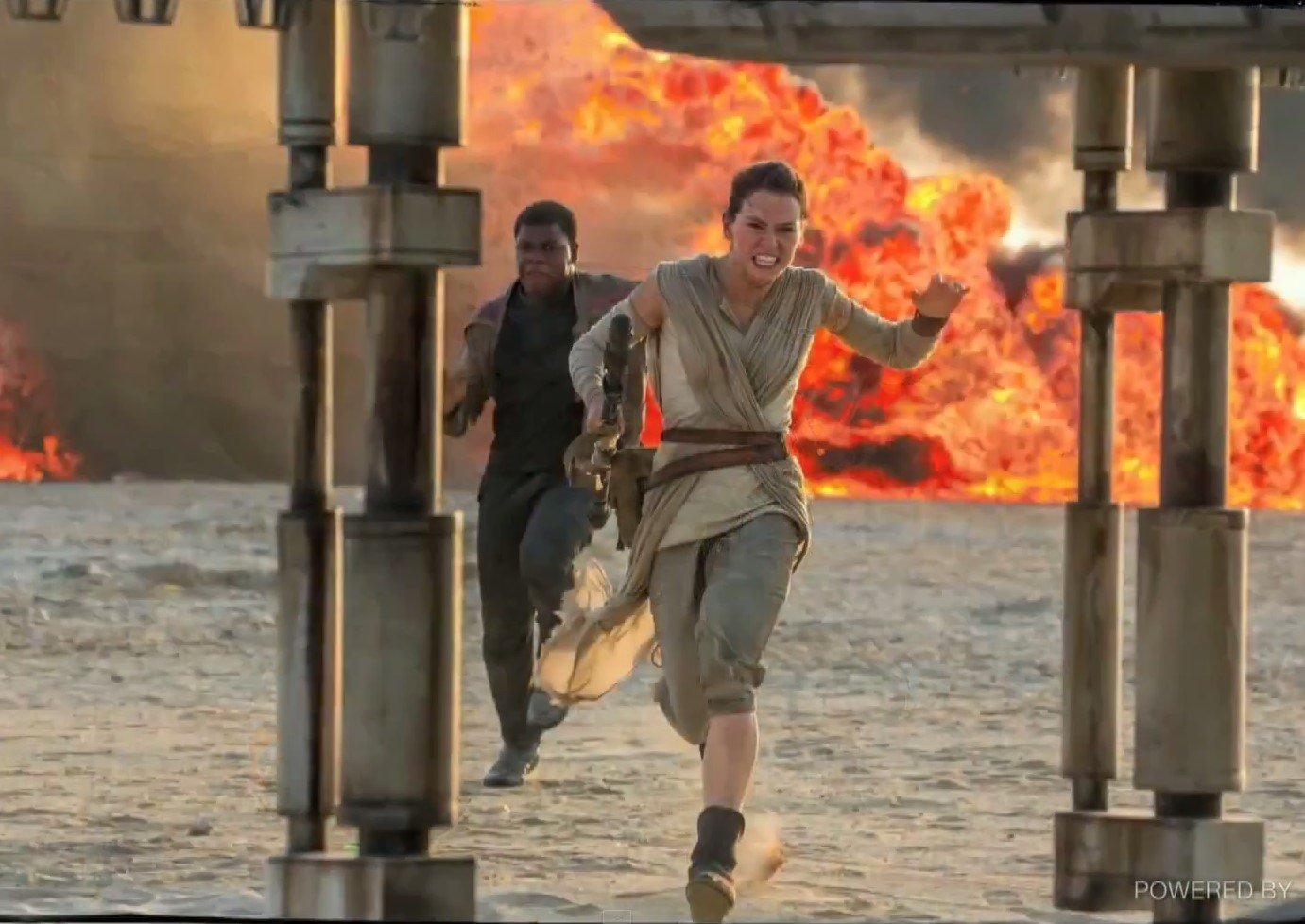 …yes, they are running towards the Millennium Falcon bridge door! Recognize those legs?

8. During The Force Awakens costume exhibit at Celebration Anaheim they showed a concept art with Finns costume. Interestingly his jacket has a lightsaber in it – specifically, the one used by both Anakin and Luke! 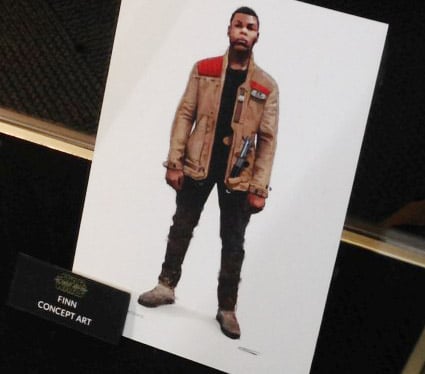 9. On the other hand the Rey’s concept art shows Rey holding a DL-44 heavy blaster pistol, Han Solo’s favourite weapon. Could this be a hint? 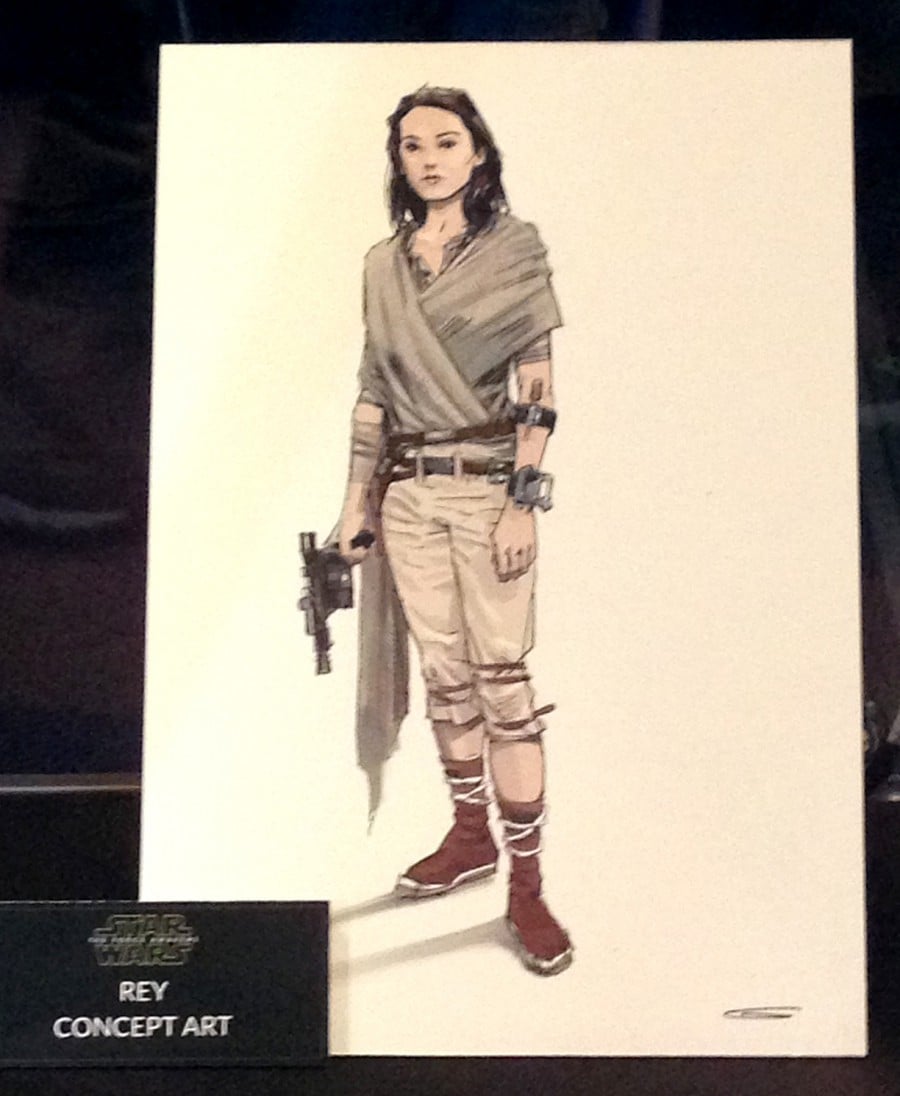 10. The exhibit also showed us where exactly the BB unit stays in the X-Wing: 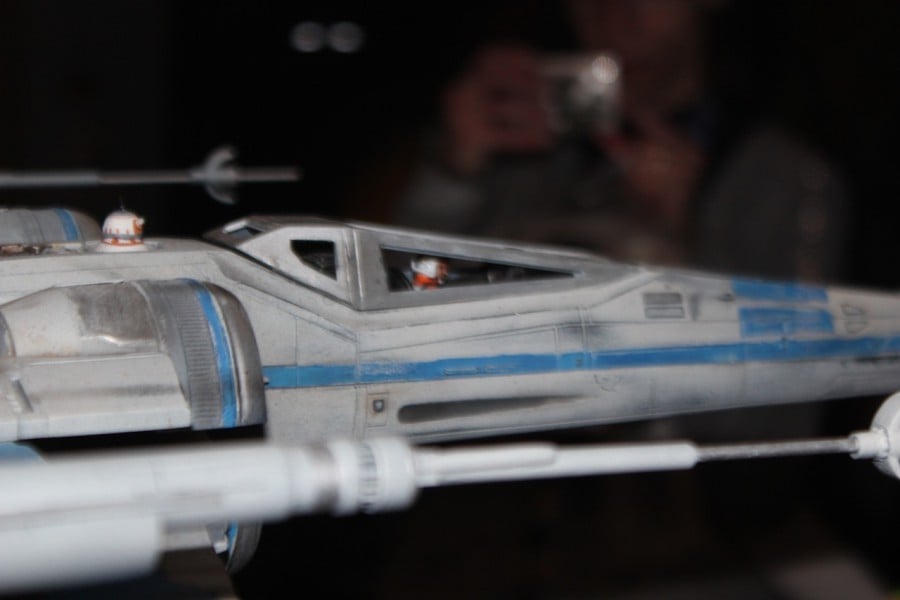 11. John Boyega and Daisy Ridley walked among the fans at Celebration disguised as Bossk and a Clone Trooper: 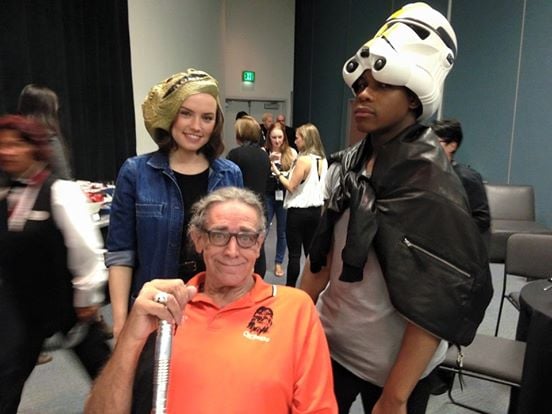 12. The shipwreck in the title image is a Super Star Destroyer, not like the regular one at the beginning of the teaser. 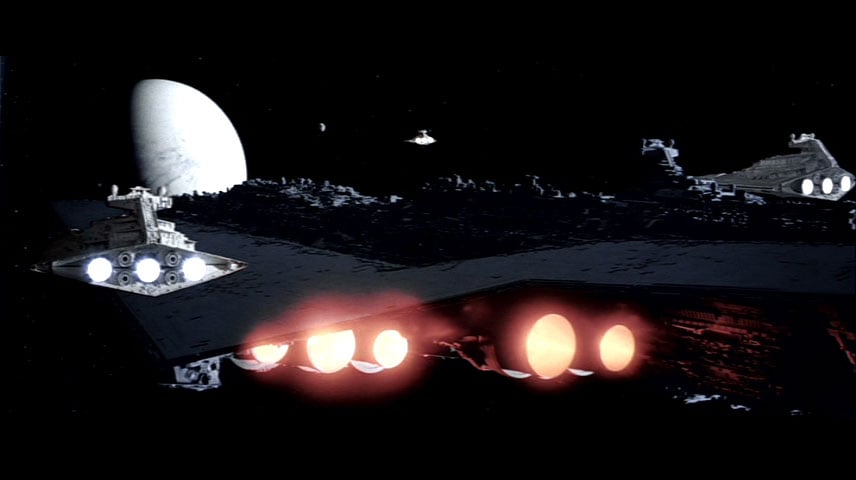 13. And finally something worth mentioning about the first teaser. Many fans noticed that in one of the shots there are all kinds of junk visible on Rey’s bumping car (that’s how they call it). In the next shot they were gone.

It was explained at Celebration that they actually used a flipped shot in the trailer. That’s why all the stuff was gone. The real shot should have looked like this: 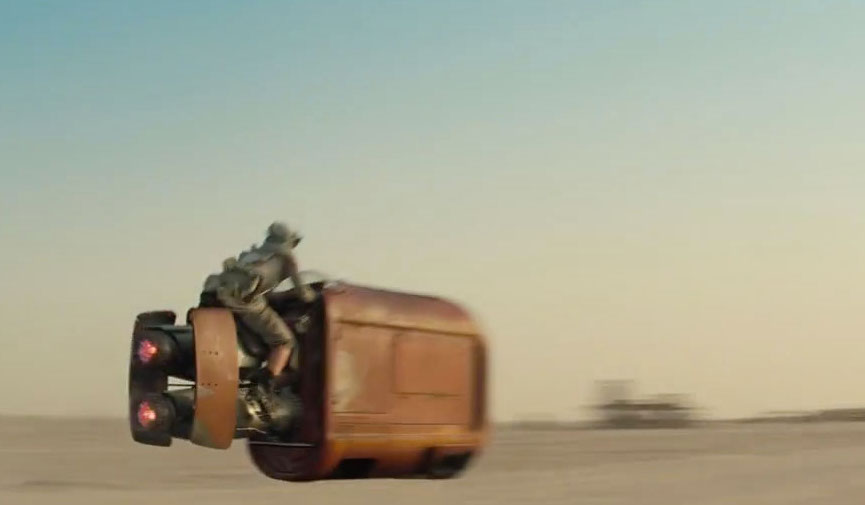 The flipped version fits better with the teaser edit and they probably didn’t want us to see that BB-8 is actually travelling in the net on the side of the vehicle (like the junk on the image below). 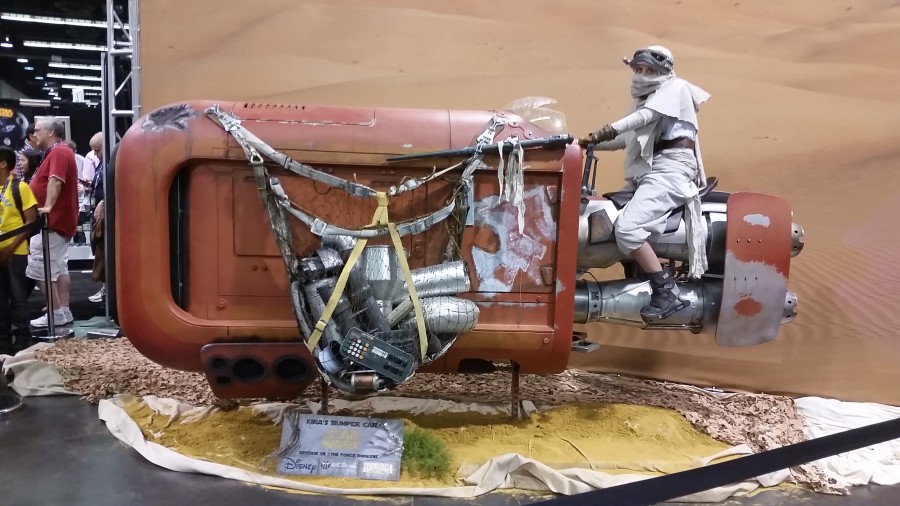 Well there you have it. I’m sure that many of you noticed these things already. Special thanks to several Cantina members for the heads up on some of those bits.

It didn’t occur to me before I wrote this article, but the second teaser did show us the Big Three (Han, Luke, and Leia). How cool is that? 🙂

Thanks to a fan of ours from The Cantina (Altgr0160) directing us to an image from the panel that Rebelscum snagged, we can add another thing to our list.

14. A closer look at the Heavytrooper. 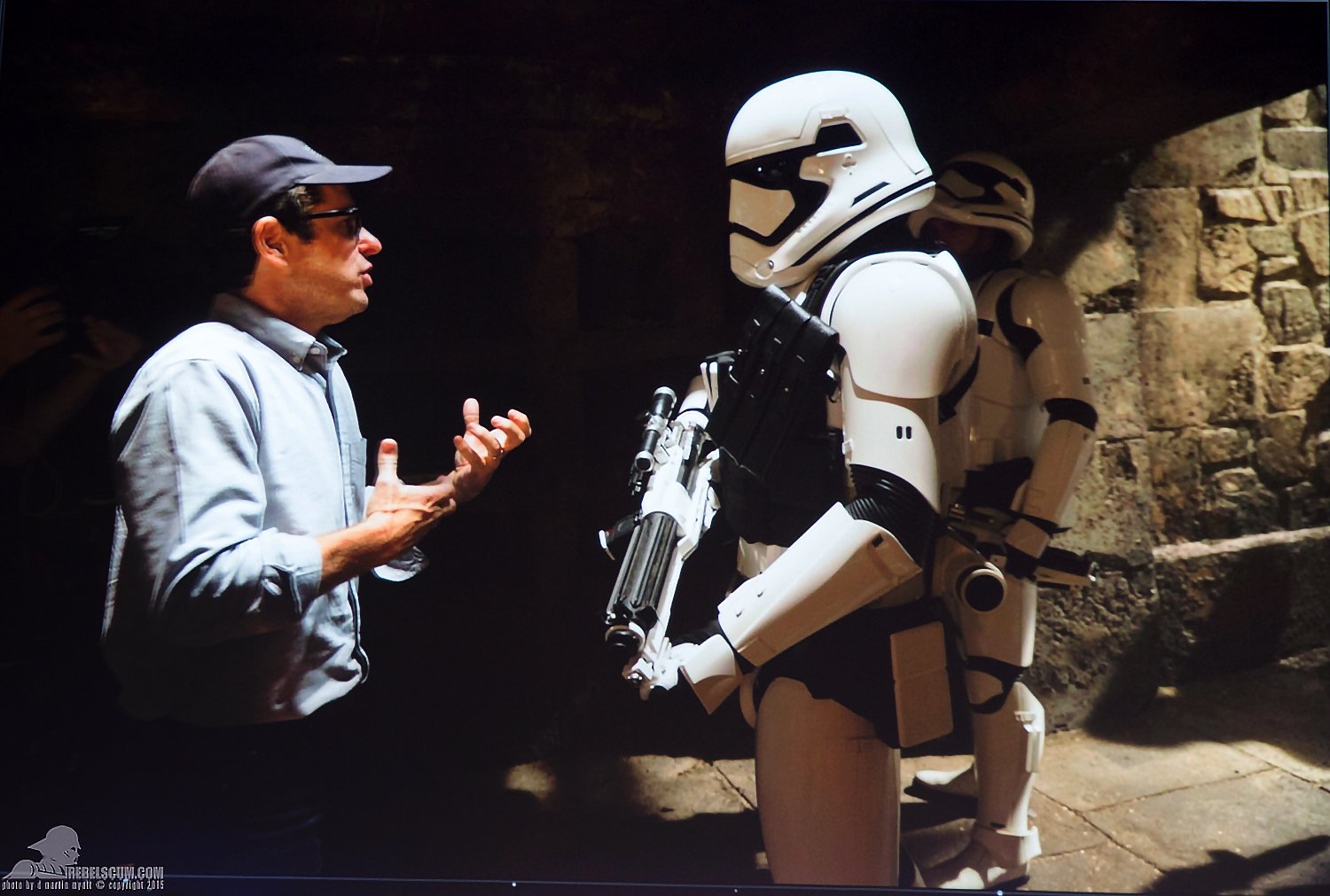