Editorial: Go for Gold – the Journey of the Medals - Star Wars News Net Go To Top
Skip to content

Editorial: Go for Gold – the Journey of the Medals 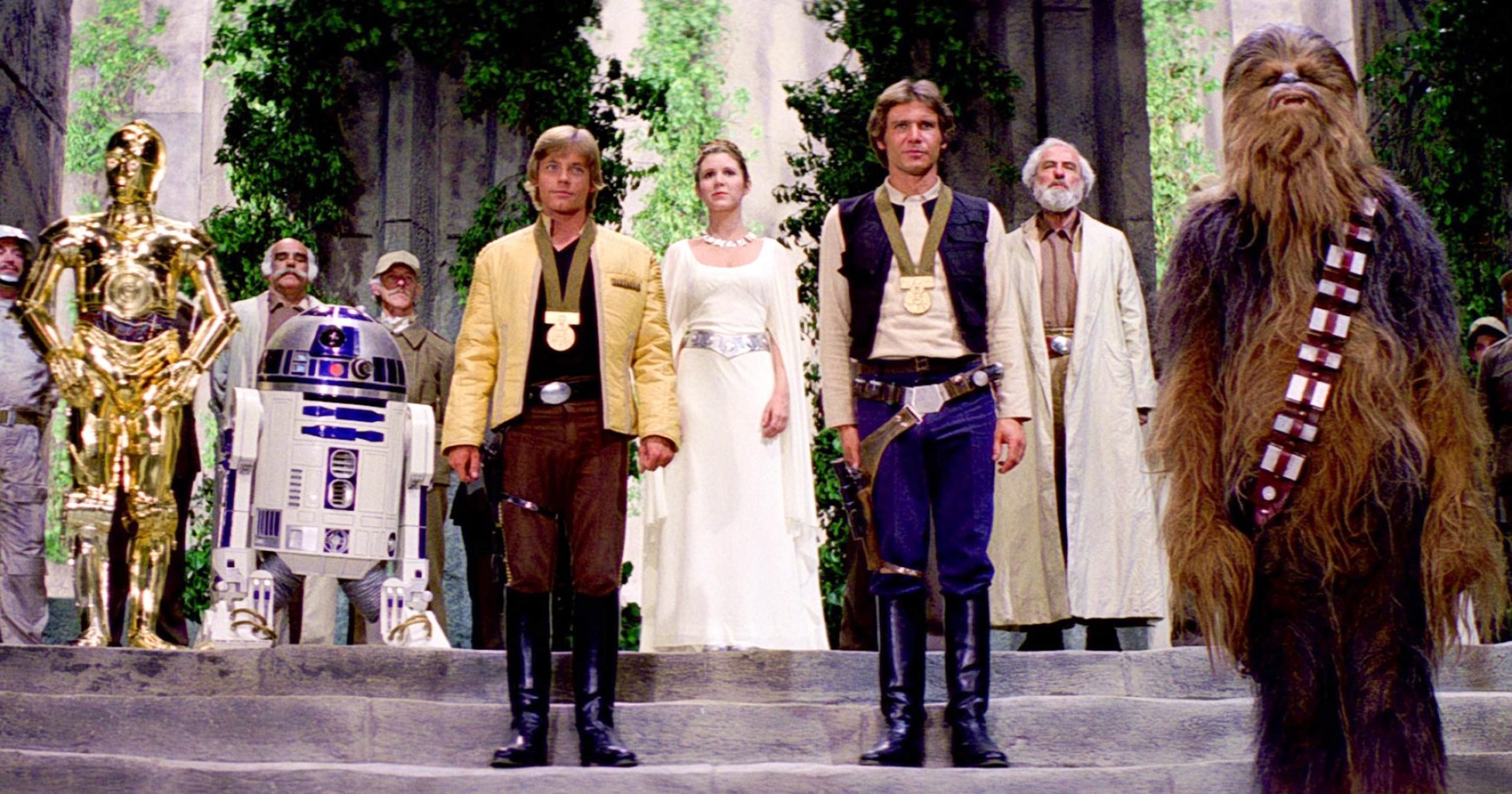 The great thing about Star Wars’ expanded media (tv shows, games, comics) is that they get the chance to tell canon stories that both take advantage of the medium and, because they’re lower risk and easier to produce, can tell much more interwoven stories (e.g. the TIE Fighter comic/Alphabet Squadron novel and the upcoming High Republic).

Such is the case of the medals. Those famous gold medals in A New Hope given to Luke and Han, and the less famous one given to Chewbacca off screen (we’ll get to that).

A pretty thing, hastily engraved in a stylized flower meant perhaps to recall the emblem of the Republic. At its heart a rising sun, halfway above the horizon, both symbolized the dawn of a new hope in the wake of this victory over the Galactic Empire and recalled the Death Star’s destruction.

Through comics, novels, and film each of the three medals have intertwined stories with the people they were gifted and passed on to that reflect their owner.

Let’s explore these stories from the beginning…

For rescuing Princess Leia and being instrumental to destroying the Death Star, Luke and Han received the Rebel Alliances ‘Medal of Bravery’ at the end of A New Hope. Leia reflects:

Giving these medals to Luke and Han had been more than a public celebration; they’d been a symbolic awarding of leadership. She’d shared the burden ever since that day.

Since the films release in 1977 Chewie’s lack of medal has been a point of contention and humor with fans; noting he undoubtedly rescued the princess and destroyed the Death Star as much as Han did.

I won’t dwell on it too much as a lot has been said before, but as early as 1978 George Lucas said this in an interview:

Chewbacca wasn’t given a medal because medals don’t really mean much to Wookiees. They don’t really put too much credence in them. They have different kinds of ceremonies. The Wookiee Chewbacca was in fact given a great prize and honor during a ceremony with his own people. The whole contingent from the Rebel Alliance went to Chewbacca’s people and participated in a very large celebration. It was an honor for the entire Wookiee race.

Despite this though, in 1980, Star Wars Weekly published a comic called ‘ The Day after the Death Star’. 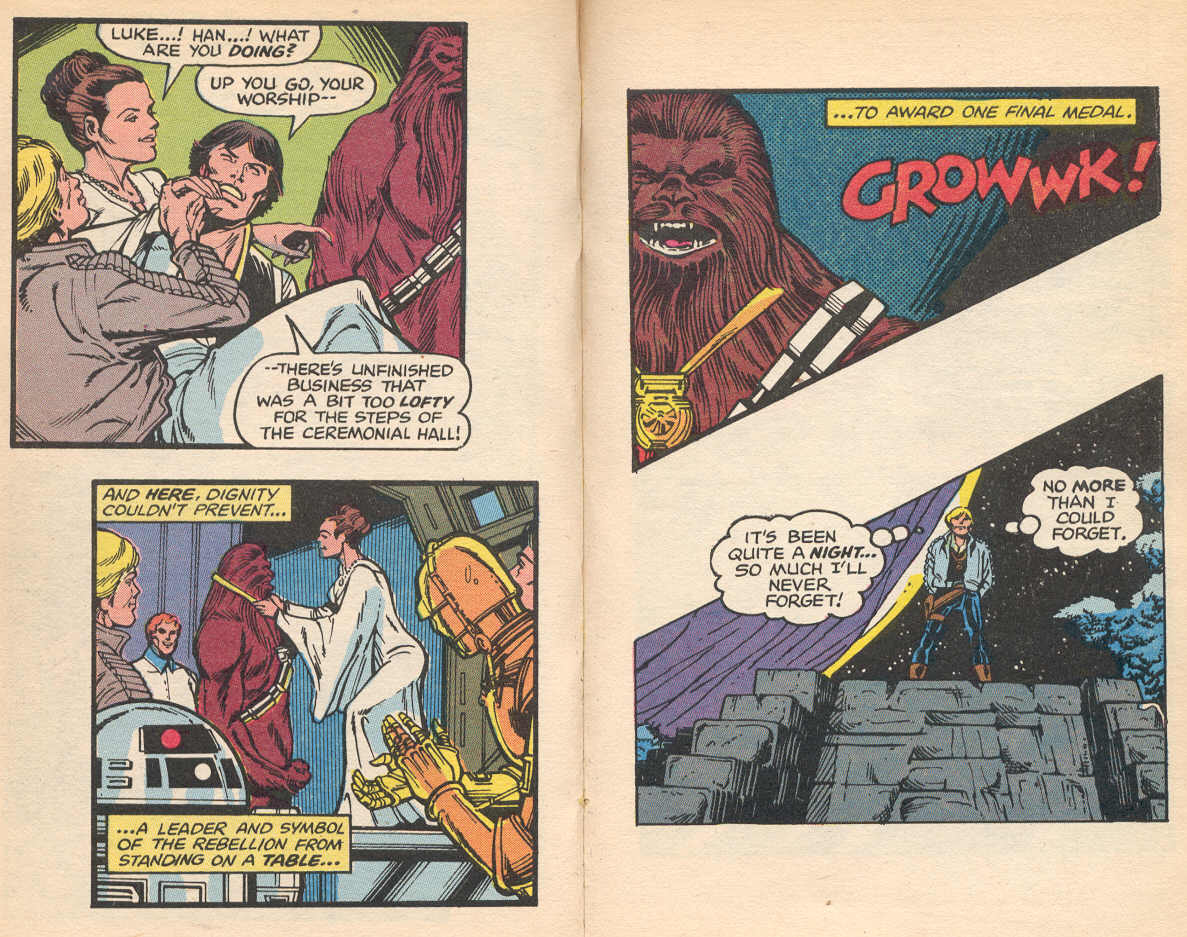 Fun as this is, it’s now considered legends and is no longer canon, so let’s get back to it.

Greg Rukka’s junior novel Smuggler’s Run is our first canon proof that Chewbacca got the medal he so rightly deserved, but Rukka takes a page out of Lucas’ book and we find out Chewie isn’t a fan of medals the way Han is.

The Wookiee sighed, a low rumble, and gazed at the medal in his palm. On the humans it looked substantial and solid, fit to be worn around the neck. In his hand the scale was altered, and if he brought his fingers together he could conceal it entirely.

Shortly after this mission (in his self-titled comic mini-series) Chewbacca finds himself travelling solo (no pun intended) in an A-wing, crash landing on Andelm IV. In an effort to fix his ship he runs into Zarro, a young girl, escaping slavery in the Andelm Beetle caverns.

Over the course of the series Chewbacca helps her and her father escape slavery by defeating gangsters and repelling the Empire.

After trouble has passed Zarro asks Chewie to stay, but, despite the language barrier understands he has a bigger purpose, for the Rebellion and for his family. She laments that, although not looking for glory, they should both receive gratitude for saving the planet. In response Chewie retrieves something from his ship. 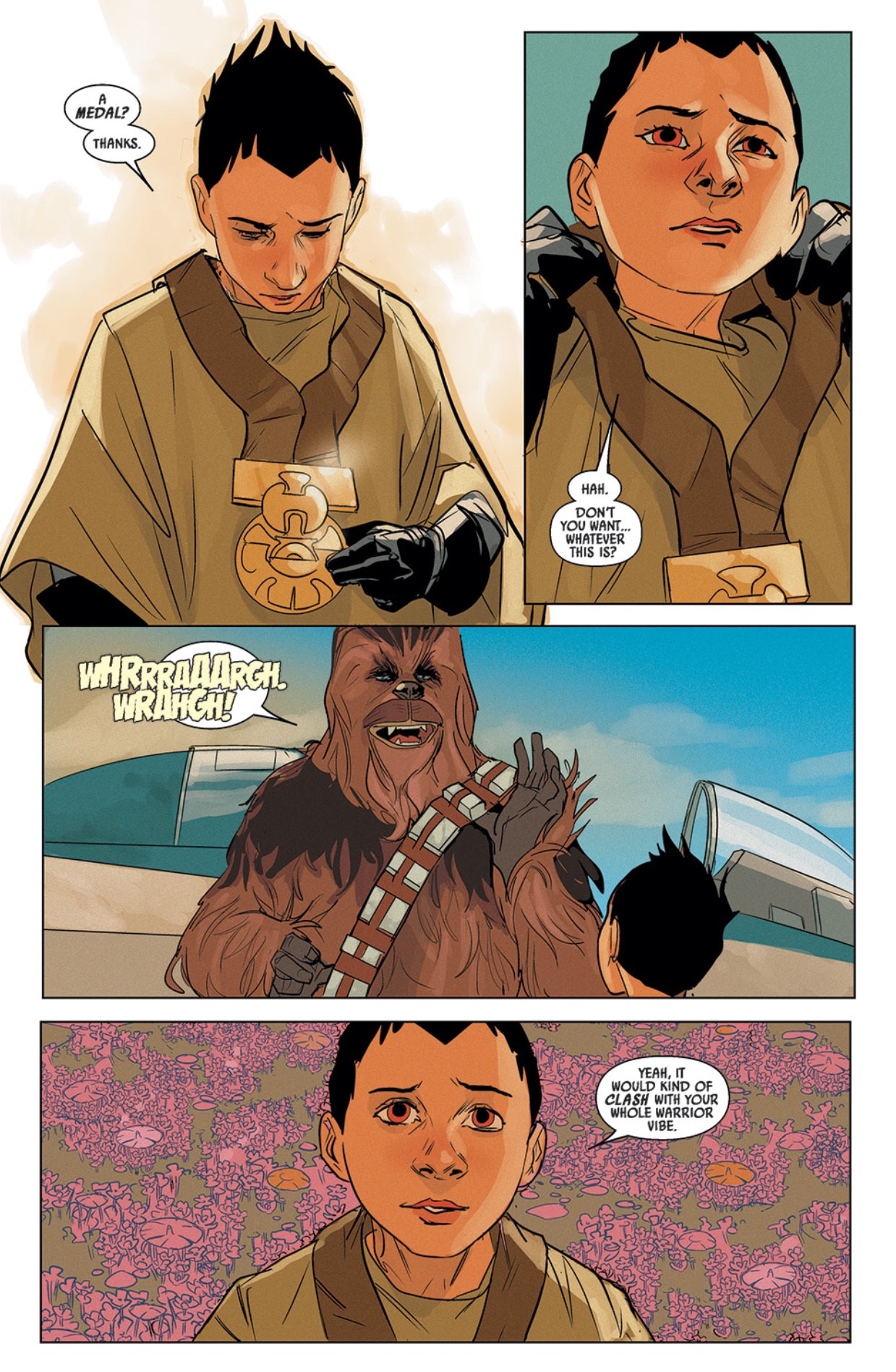 So, Chewbacca gives us a direct answer as to why he doesn’t want the medal, and when we finally learn Shyriiwook fluently, we’ll know too! However Zarro, and us, get the point.

Regardless of the reason, he has no love for the medal, giving it away to someone much more wanting (and no less deserving) of it within weeks of receiving it.

Whether its small size, his species’ lack of interest in possessions or the Death Star’s destruction bringing him closer to freeing his homeworld was reward enough, Chewie didn’t need a Medal of Bravery that meant so little to him. However, the next time he received one, it would mean everything…..

That’s the last we’ve seen of Chewie’s medal and the last time we see any of the medals for quite some time.

Around four years before The Force Awakens, in Kevin Shinick’s YA novel Force Collector, we meet teenager Karr Nuq Sin.

Karr has force visions when he touches objects, seeing and feeling events attached to the objects history.

In search of answers about the mysterious Jedi, and the unknown Force that flows through him, he’s taken all over the galaxy, eventually visiting Takodana and the ever-wise Maz Kanata.

To test his claims Maz gives Karr something with a history she knows, at least one she thinks she does….

“It was entrusted to me for safekeeping, some years ago—by a man who couldn’t pay his bar tab…..Go on, hold it. Listen to it. Tell me what it says to you.”

“It’s a medal? A big round medal with some symbols on it. It belonged to….Two men. One taller, with darker hair. One smaller and younger. This belonged to…it belonged to Skywalker…..put on his neck…around his neck. A woman put it there. She had dark hair, in a long braid’

Maz interrupted, “Wait. You say it was Skywalker’s? Are you sure?”

So we now know, through Karr, what happened to Luke’s medal. Han has somehow gotten (or stolen) it and given it to Maz as collateral to pay his bar tab, playing it off as his own medal!

Maz then proceeds to deliver some of the filthiest language found in any Star Wars media….ever.

“That bastard!” she said merrily. “That tricky bastard!”

You’ve told me something I should’ve known in the first place! That scheming bastard Solo, always a cheater when cheating is easy.

It’s unknown when Han paid his tab this way, the last time we see Maz and Han interact before this is during the events of the video game Battlefront II (Junior novel Pirate’s Price could be before Force Collector but I estimate it’s after, besides, it holds no information relevant to Han’s debt to Maz).

During the game, Han is looking for an Imperial turncoat who’s set to give him information to help free the Wookiees on Kashyyyk (the first 2 minutes of the video below cover the scene if you’re interested).

Maz slyly replies to Solo’s ‘I owe you one’ with ‘You owe me more than that, Han Solo and don’t you forget it.’ Han hasn’t paid his debt yet (this is within a year of Return of the Jedi) but has by the time of the novel.

I imagine Luke left his few possessions with Leia and Han before going off to start the new Jedi order. Han wasn’t willing to part with the first thing he’d ever received from his wife (or maybe, as we’ll see, Leia was in already in possession of Han’s) so he decided to take Luke’s and pass it off as his own. Maz’s ‘It was entrusted to me for safekeeping’ implies it was merely collateral with Han, as always, planning to pay off his debt and return the medal before Luke or Leia would notice.

What became of that medal? We can assume Maz still had it with her at the time of The Force Awakens, so it depends on whether it survived the First Order’s bombing of Takodana Castle and what Maz did with the remnants of her former home. Either way, we haven’t seen it since.

Finally, we get to Han’s medal, the real one this time.

After the ceremony Han’s medal doesn’t appear again in canon until The Rise of Skywalker; it is implied but never explicitly mentioned that it’s Han’s in the film, however the novelization clears that up for us.

While we don’t see the medal in the movie until Leia’s final moments, in the novelization we hear her thoughts regarding it and her attachment to it.

She stood in her quarters, holding Han’s Medal of Bravery….She wouldn’t be surprised if someday her thumb wore a path through the engraved medal, so often did she find herself rubbing it back and forth, lost in memory.

It was a comfort to her in life and Leia chose to have her husband’s medal with her at the end, a reminder of the love they shared together and for their Son, of the day she’d given it to Han when “her heart had been so full of hope” and that it still could be in her final moments.

She was Leia Skywalker Organa Solo. As she caressed Han’s medal, she fully embraced all those inheritances. And she would pass them all to the next generation. Her Skywalker legacy would go to Rey, Organa to Poe, and she would try one last time to pass her Solo legacy to her son. So that’s how it would be. A final act of hope, and then she would rest.

The medal was a source of comfort in the final year of Leia’s life and in her final act, saving both Rey and her Son. However, it would soon be comfort to another.

At the end of The Rise of Skywalker we finally get a big screen nod to Chewbacca’s lack of medal in A New Hope, with Maz giving Chewie a medal held dear by both Han and Leia.

In the film we see Maz give Chewie the medal and simply say ‘This is for you’, the camera then cuts to the next scene. In a clever move by Rae Carson, the novelization’s author, she keeps the ‘camera’ rolling and Maz then says ‘He’d want you to have it’.

Chewie’s first medal of bravery may not have meant much, but this one meant everything to him, simultaneously a symbol of three people no longer by his side; the men he received it with that day on Yavin IV and the woman who’d held it to the end.

So there we have it, three medals, three stories. Used to celebrate the Rebellion’s first big win against the Empire, to show gratitude to those that helped spread the light, and to assure Han that the rebellion could afford him, through multiple mediums these medals have brought out Chewbacca’s selflessness, Han’s roguishness and Leia’s boundless love.

Chewbacca’s medal is with a grown up Zarro, Luke’s with Maz (or the rubble of Takodana castle) and Han’s is with his fearless co-pilot.

All the medals are out there still, and given their significance, I’m sure that we’ll see them again.

Until we do, may the Force be with you, always.