Review – The Scoundrel Doth Protest Too Much in Age of Rebellion: Han Solo #1 - Star Wars News Net Go To Top
Skip to content

Review – The Scoundrel Doth Protest Too Much in Age of Rebellion: Han Solo #1 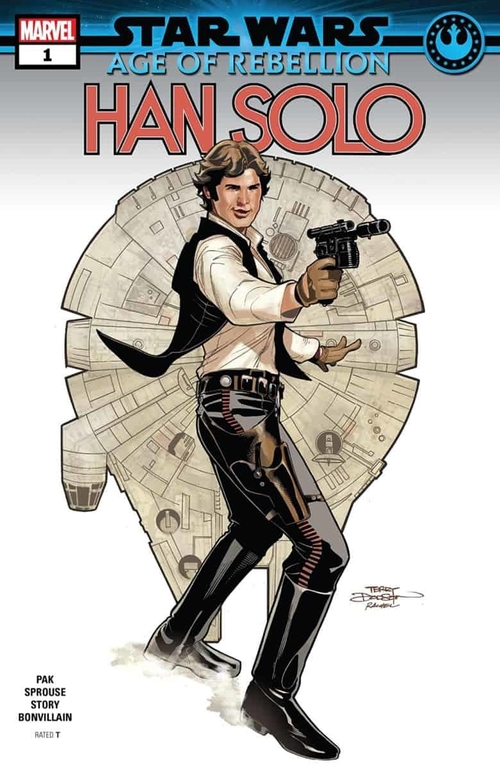 „RUNNING FROM THE REBELLION“ – The heroic Rebel Alliance has recently won its first great victory against the evil Galactic Empire…thanks to the infamous smuggler Han Solo and his Wookiee companion, Chewbacca. At least, that’s the way HE sees it! It’s time to cut and tun and return to their roguish ways…

The title of this review is quite literal and Marvel’s title (Running from the Rebellion) is a metaphorical summary of this issue in the Age of Rebellion comic run. Set after the destruction of the first Death Star and before the Rebellion found its way to Hoth, the story finds Han and Chewie on the Mid-Rim planet of Balnab, counting their reward and making plans for the future. The money is sufficient to pay off Jabba and spruce up the Falcon as well as open up more opportunities for them. 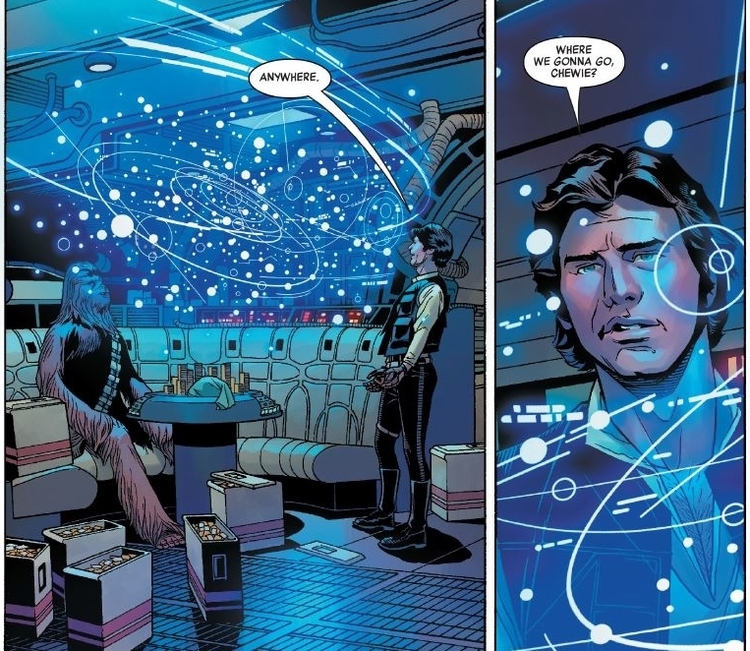 But things are never that simple for Han. Luke turns up asking for another favor for the Rebellion that could save lives. Han protests, clarifying that Leia was the only reason he did Cyrkon mission. The Cyrkon Extraction was a mission depicted in Greg Rucka’s Smuggler’s Run where Han and Chewie saved Caluan Ematt from the Empire and its ISB. 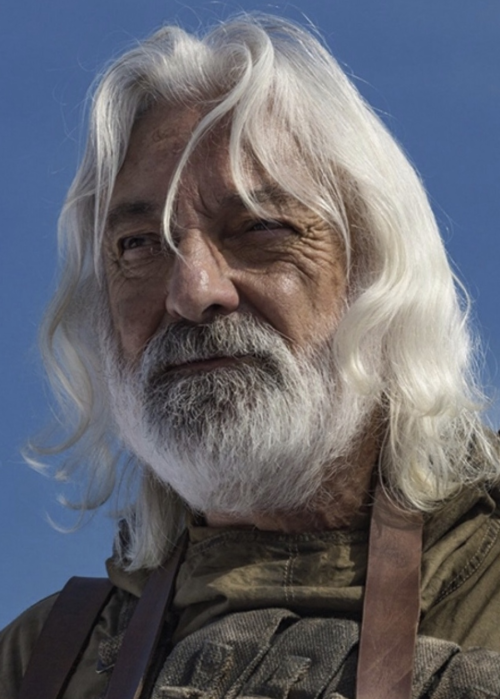 Caluan Ematt in The Last Jedi

Luke tries to appeal to Han’s nobility and ego, telling him lives are at stake and he is the best smuggler they have. The comedy comes from the fact that no one is paying attention to Han, not Chewie nor Rebel soldiers who bring the crates on his ship. The crates need to be delivered to a surveillance outpost on Calumdarian. 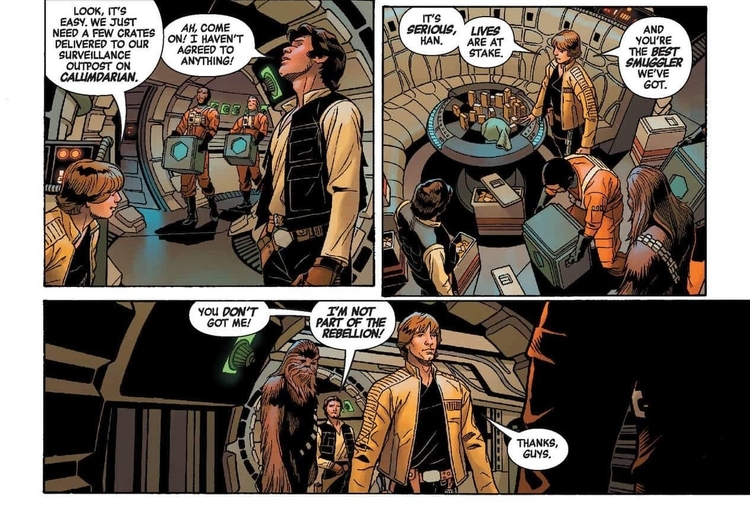 In the spaceport, Han, still unhappy, has to break up the fight between the Rebels and smugglers led by his and Chewie’s acquaintance Akko. After a night of drinking and friendly smuggler ribbing for being involved with the Rebellion, Han agrees to do a job before he actually delivers the crates to their destination. Chewbacca is not thrilled about it, but still goes along with Han as always. The spice is delivered to Troiken without a hitch and the money is earned, but their Xexto business partners force them to socialize. The party becomes wild, attracting Imperial attention. 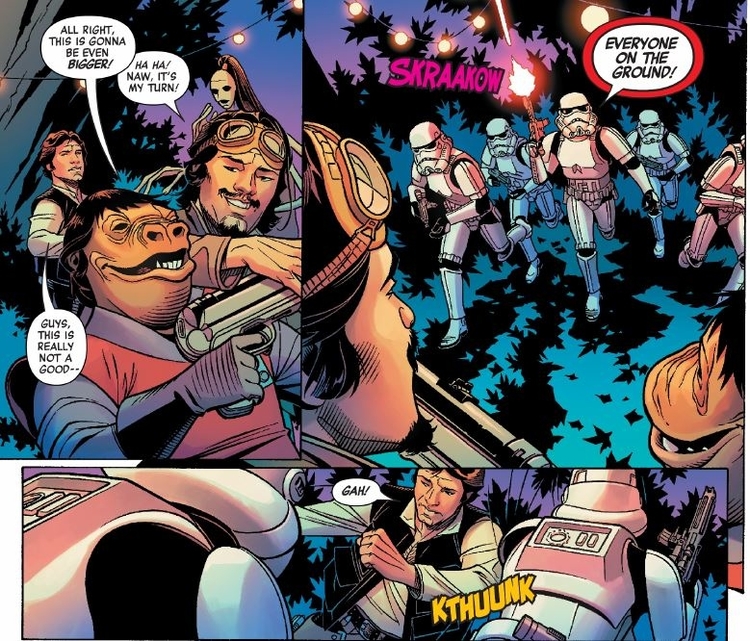 While Han and Chewie manage to escape, the rest of the group is caught. The Imperials demand their cut and Han and Chewie have to go back with the money in order to save them. To keep Luke’s crates intact, Han and Chewie had to dump them in the jungle. After they saved Akko and company, they return for the crates which are found by aliens. Two friends are forced to buy them from them. So, Han and Chewie lose both the reward and the smuggling money. 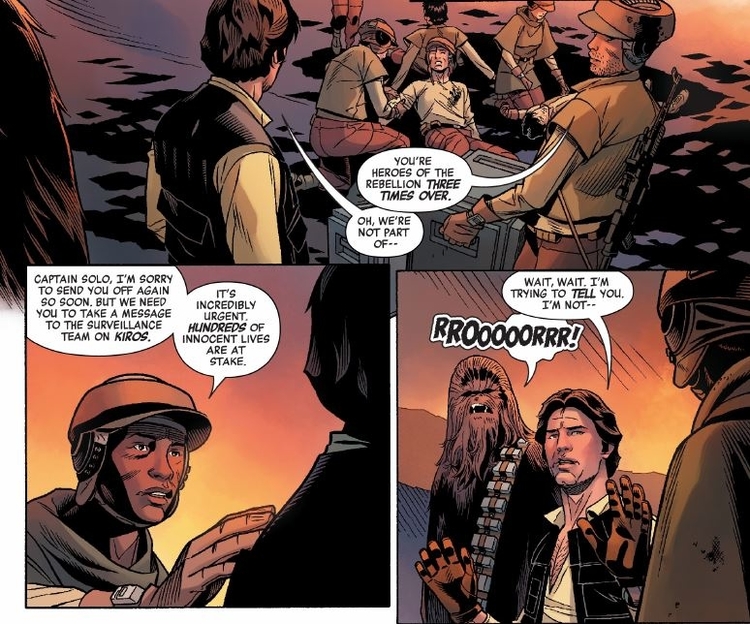 The partners make their way to Calumdarian just in time to help the Rebels dealing with a poisonous atmosphere, and are then immediately sent out on another mercy mission. Chewie puts his foot (paw?) down and Han Solo proclaims again that he is not, most definitely not, no way, no, part of the Rebellion. 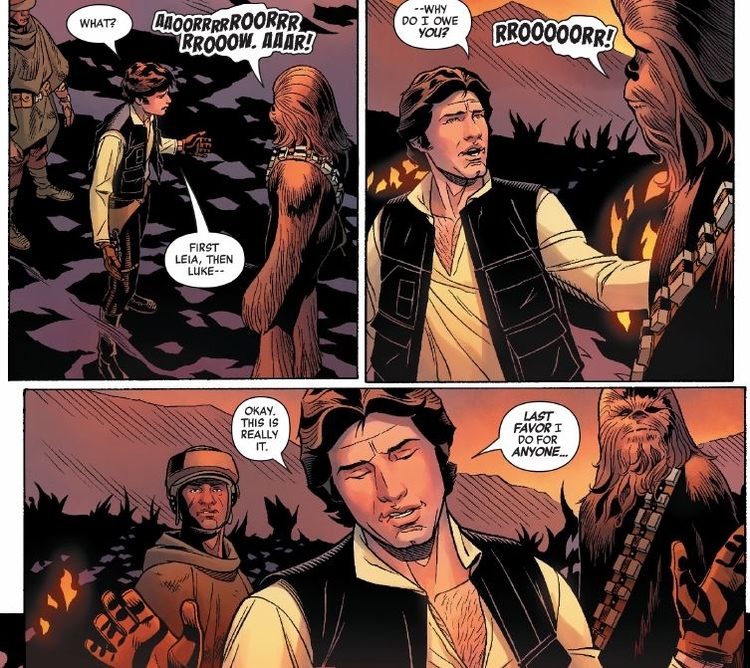 There is truly not much to say about this issue. The Han Solo from this issue is Han Solo from the beginning of The Empire Strikes Back. He just wants to pay off his debt to Jabba and return to his smuggling ways, but is repeatedly roped into helping the Rebellion. As is clear from the other canon entries, Chewbacca is the more empathetic partner and the one who pushes Han into doing the right thing over and over again – until Han is ready to be honest with himself.

There is nothing wrong with this issue, don’t get me wrong. The characterizations are on-point and the humor is Star Wars humor. I loved Sprouse’s art in this issue which stands out as best thing about it (especially character design). My disappointment comes from the fact that the issue has no impact on canon nor on the character of Han Solo. We learn nothing new about him or Chewbacca. We don’t get any psychological insight into his character, as was the case with some of the previous issues in this series.

The only question I have is: What did Han do to get paid again? Because, at the beginning of The Empire Strikes Back, he once again has his money.

In general, I’ve been having trouble with how Han Solo is written in a parts of canon beyond the movies. Yes, Han is a pretty straightforward character in the original movies, but it just seems that the authors can’t see beyond that. This is part of the reason why I enjoyed Solo so much. Living rough on the streets of Corellia is not the only thing that made Han who he is – heartache did too. It is possible to find different facets and nuance even in the simplest of characters. And you will not find that in this issue.

Maybe we will be luckier in that respect with the next issue which features Boba Fett, but until then… 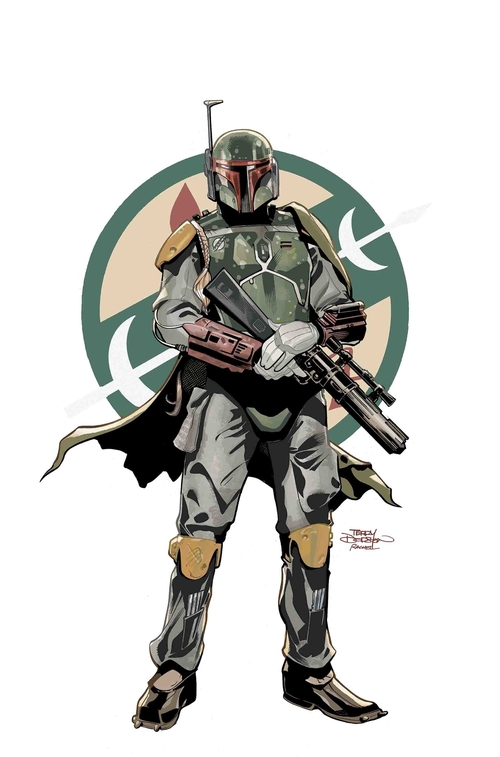