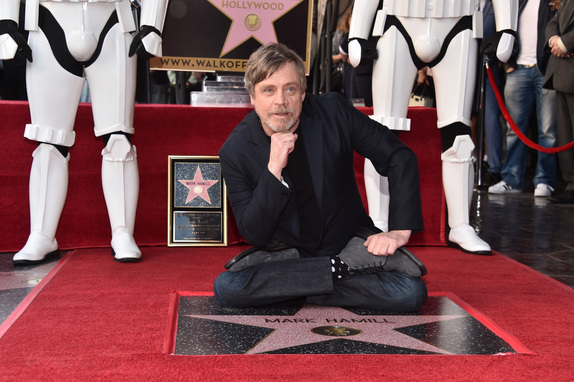 Yesterday was a special day for everyone’s favorite farm boy turned space knight as Mark Hamill added to his legacy by getting his very own star on the Hollywood Walk of Fame. Mark is without a doubt one of the most beloved actors by any fan base, and to many of us Star Wars fans, he is Star Wars. Since playing the main character of the original trilogy, he has endeared himself to the fans through his fun and caring interactions with us over the years. Hit the jump to read more and to catch some soon to be iconic images from the event. 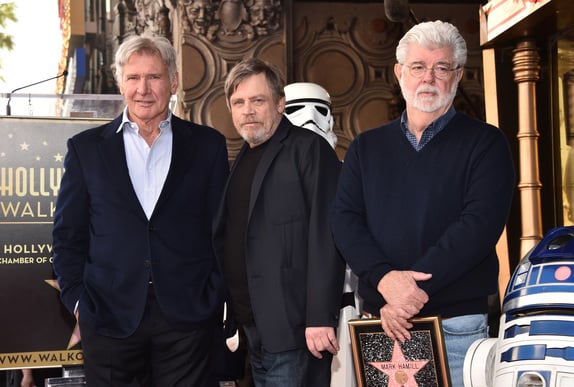 Hamill jokes that [his star] will also be far, far away. Asked if he knows where it’s being placed, he quips, “I think it’s going to be on the third floor behind the men’s cigarette machine.” It will actually be prominently located near Hollywood and Highland, and the honor is something Hamill is still struggling to grasp. “I’d like to say it’s a dream come true, but I didn’t even dare to dream it,” he says. “And you can get self-conscious about it, like, ‘Am I worthy of this?’”

George Lucas and Harrison Ford spoke at the event in honor of their working relationship and lifelong friendship with Mark Hamill. You can watch the full video below, but here is a little bit of what they had to say… 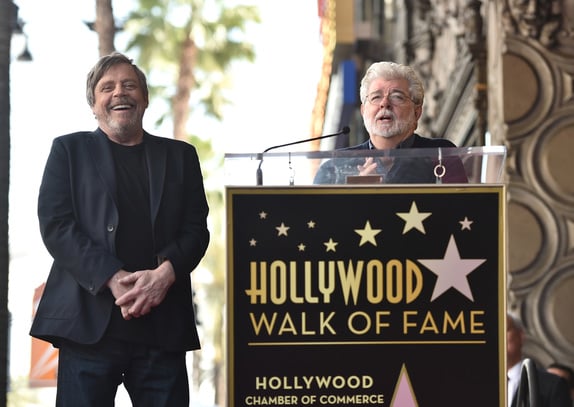 A word from George Lucas:

Mark Hamill is a character that can’t be written. He is extremely enthusiastic about everything he does. And that’s exactly what I was looking for when I was looking for Luke Skywalker. I was looking for somebody that had grown up on a farm out in the middle of nowhere that was very naive about what was going on in the world – young – but enthusiastic. And he proved to wear his medal well. I’d gone through a very long process of casting, and it became very clear after a while when we started doing screen tests that not only was he a good actor, but he was also great with the other actors that were in the finals to be the cast of Star Wars…

…I’m very proud of Mark for getting this star. We’ve been around together for I don’t want to say how many years, and (to Mark) you’ve come a long way from that casting session to getting your star on Hollywood Boulevard. 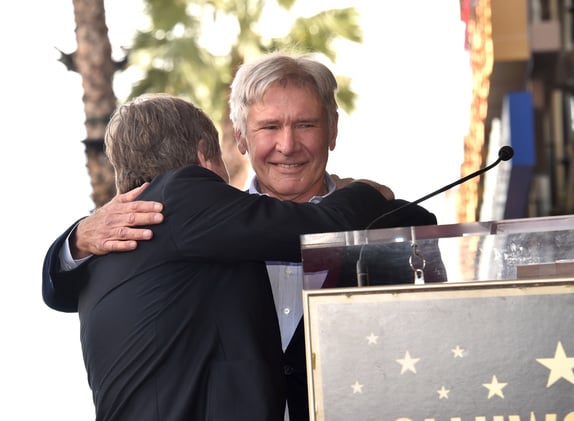 Harrison Ford took a moment to rib Mark a little bit before mentioning his sorrow at Carrie Fisher’s absence and finally saying some kind words about Mark and offering his own congratulations.

Wow. There was a lot more people that showed up for my star. A lot more. I prepared myself for this experience by going back and looking at the screen tests that I did with Mark. And I was surprised actually how good he was. He had just the right blend of youthfulness and enthusiasm…

…When thinking about today, I was really sorry that we don’t have the other member of our trio here to celebrate with us. But I feel her presence.

Mark is a friend that I don’t see very often. Our lives have diverged to a certain extent, but I am very pleased for him. He has been the master of his own experience, his own life, and he is – as he always was – a quiet, sincere, honest person.

Aside from being Luke Skywalker, one of the most recognizable characters in the history of cinema, Mark has also dazzled audiences with his incredible award-winning voice talent (most notably as the quintessential Joker in the animated Batman series in the 90’s). We can think of no one more deserving of this honor (we may be a little biased, but that’s fine by us), and we wish to congratulate Mr. Hamill on not only this honor, but for a lifetime of achievement in cinema and television. So congrats Mark, and may the Force of others be with you…as yours has been with us for the last four decades.

Before you go, check out this really cool video from the official Star Wars YouTube channel about Luke’s Top Ten moments in Star Wars: