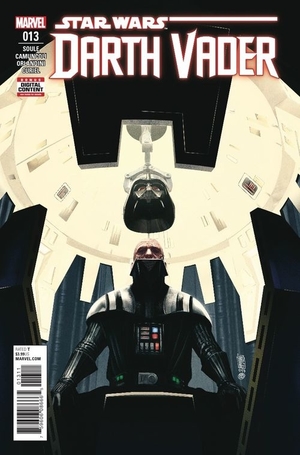 Burning Seas Part I – As the Empire’s grip tightens, the stirrings of Rebellion begin in the Mon Cala system. Order must be maintained…a job which falls to Vader, his inquisitors…and a man named Wilhuff Tarkin.

This issue marks the start of the new story arc – Burning Seas. Before we begin, we must clarify something – both the opening crawl and text within the issue contain a factual error. The crawl, and Palpatine, state that the story takes place three years after the Emperor seized power. In reality, only a year passed. This was clarified by Lucasfilm story group’s Matt Martin. While the error won’t be corrected in the initial print run and digital release (it wasn’t in my digital copy), it will be corrected by the time trade paperback is released.

I think he shows up in #13 too, actually. The recap page is just incorrect. It's not three years. 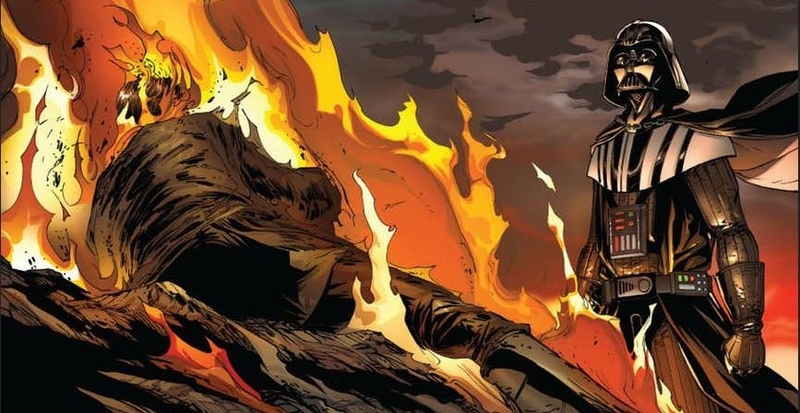 When the issue opens, we find Vader in meditation imagining a different outcome of the duel on Mustafar – one in which he manages to defeat Obi-Wan Kenobi. His wishful thinking is interrupted by the Emperor who has a new task for him.

Since he took over, Palpatine projected an illusion that his Empire was simply an expansion of the Republic and that the senate still maintained power, when in reality it was he who dictated everything. Vader needs to make an example of Mon Cala and show the galaxy the price of defiance, to keep all systems in line with the Emperor’s rule. To enforce this, the Empire reveals its military might. While the space station is not yet operational, the Empire has many other weapons to pound fear into the hearts of the citizens of the galaxy.

However, the Emperor doesn’t need Vader to lead the military operation. He suspects the presence of the Jedi on Mon Cala due to their king’s negotiation tactics. Vader is tasked to take his team to the planet, discover the truth, and destroy any presence of the Jedi.

The military operation is given to Governor Wilhuff Tarkin whose ship Sovereign is in Mon Cala’s orbit. He is planning a multi-staged invasion of Mon Cala if the negotiations fail, preparing attacks on the cities that would act as a stage for aquatic assault as well as propaganda war that will stir trouble between Quarren and Mon Calamari. His goal is not to destroy the planet but to control it. 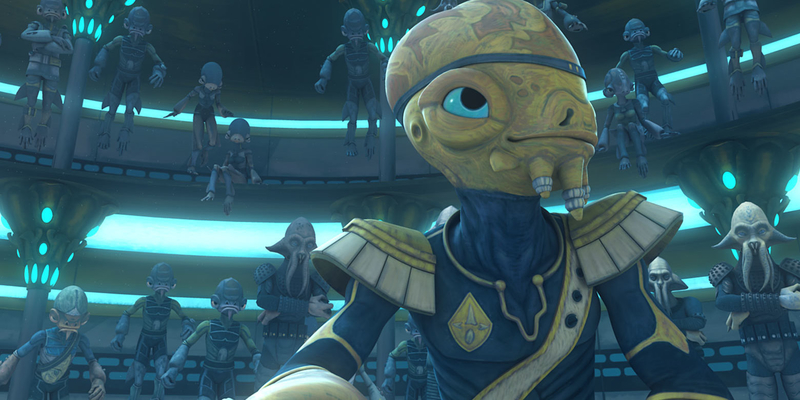 Lee-Char in The Clone Wars

On the surface, in Dac City, the Imperial ambassador Telvar is negotiating the use of Mon Cala’s resources with the king Lee-Char, with whom Star Wars fans became familiar with in The Clone Wars. The Empire is basically demanding the planet’s resources at rates that would impoverish its people. The leaders of Mon Cala aren’t happy, especially with war ships parked in their orbit. Some of them, like Raddus, are not shy in expressing their opinions, which stalls negotiations. 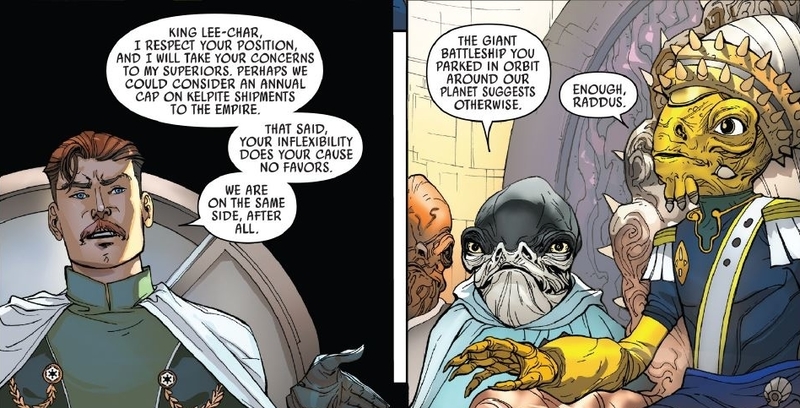 In response to this, “an entirely different form of diplomacy” (in Tarkin’s words) is put into effect when Vader arrives on the planet with his inquisitors. They are met by the king’s chief of security, Commander Gial Ackbar. In spite of the Imperial authorization, he is not willing to allow them access to the planet without an explanation. He denies Vader’s claim that there are enemies of the Empire on Mon Cala, a claim that is then proven when the ambassador’s ship explodes. 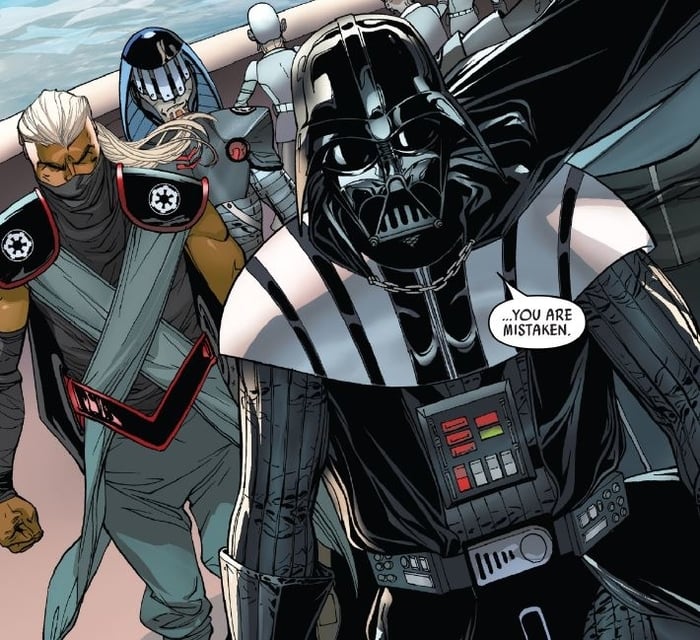 The incident not only allows Vader and the inquisitors access to Mon Cala, but also triggers Tarkin’s planned invasion. As the issue closes, it is revealed that Palpatine was right – Mon Cala has help from a Jedi. The yet to be revealed Jedi is aware of Vader’s true identity, knowing the man in the mask is Skywalker. 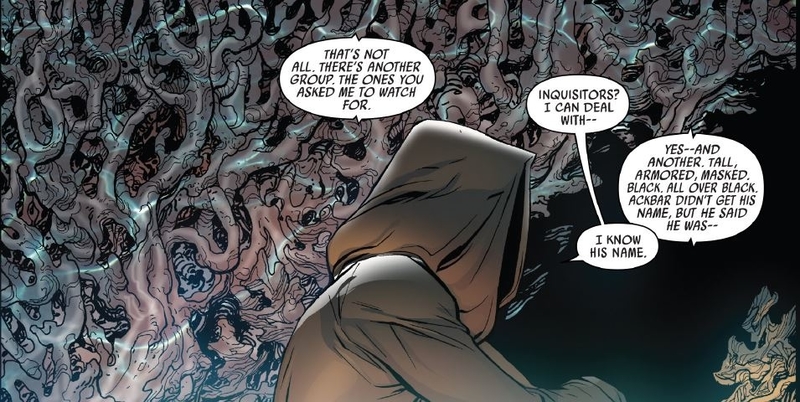 While reviewing the issues of this particular comic run, we on the site have repeatedly praised Soule’s story telling in recounting the events of Vader’s early years in the Empire. With that said, I I was a bit concerned when I read the summary of this issue. Knowing that canon hiccups can and do occasionally happen, observed earlier in this review, and also in James Luceno’s novel Tarkin, I knew that the close cooperation between the Dark Lord and future Grand Moff still looms in the canonical future. Vader and Tarkin have certainly met before (as seen at the end of The Revenge of the Sith), but their cooperation and mutual respect have yet to develop. It seems, however, that Soule found a clever way to bypass this potential contradiction. While they are participating in the same operation, it seems that the two men will never actually share ‘screen’ time.

On the other hand, Soule brings multiple Star Wars characters together, effectively connecting the historical and narrative eras – the Republic era via The Clone Wars and the era of the Galactic Empire and the Galactic Civil War via Rogue One and the original trilogy. He is planting the seeds that will develop into Mon Cala becoming one of the major players in the future of the Rebellion.

(Note: The timeline Matt Martin has corrected is important because in a few weeks or months, in-world, the Sixth Brother who appeared in this issue for the first time will be killed by Ahsoka Tano (novel Ahsoka) and his kyber crystals will be used to create her white lightsabers.)

Having been saved from the Separatists by the Jedi during the Clone Wars, it is not a surprise that Lee-Char would harbor one of them and accept their guidance. I am very curious to see if the mysterious Jedi is someone we have seen before. It might be prudent to revisit the list of the potential survivors Vader accessed while searching for Kirak Infil’a in the beginning of this run. It is also assuring to see this synergy between different Star Wars authors working under Marvel’s umbrella since, in the current Marvel’s Star Wars run, Princess Leia is about to attempt breaking out Lee-Char from the Imperial prison.

I always like reading more about the Imperial tactics in subduing the defiant worlds. Tarkin’s comprehensive plan is impressive, though I suspect that Vader and the Inquisitors gave him a hand by actually assassinating their own ambassador. If this issue is anything to go by, we can look forward to the war on two fronts: between two military forces and between the Force sensitive. I always appreciated Camuncoli’s art and this issue is no different, so I am hoping he will give us actual underwater warfare in the upcoming issues. We might even get to see the actual launch of Profundity into space.

As far as series introductions go, Burning Seas Part I is an excellent opening to this new promising arc. Charles Soule is doing an amazing job in bringing us the untold stories of Vader’s early years and Palpatine’s consolidation of power within the Empire. I know I am repeating myself, but it is worth repeating: this is the most exciting and most consistent comic run Marvel has given us since Disney took over. If you have never picked up a Star Wars comic before, this is the one to start with. 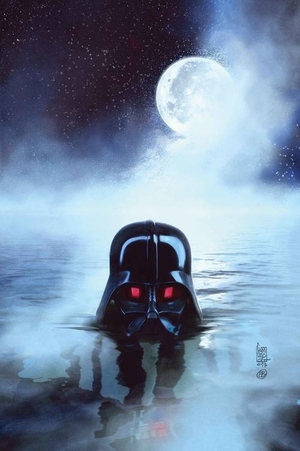 Darth Vader continues his mission to bring Mon Cala to heel! As the Emperor grip tightens on the galaxy, no tolerance for rebellion can be afforded… especially not when being fomented by a surviving Jedi. Vader goes in for some wet work in this brutal story!