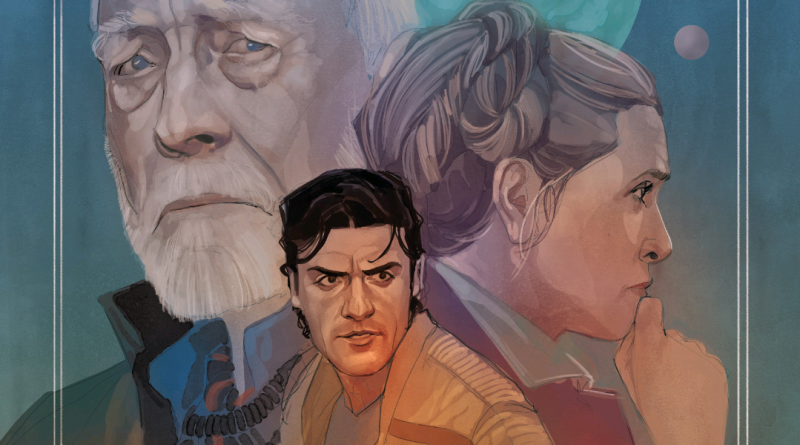 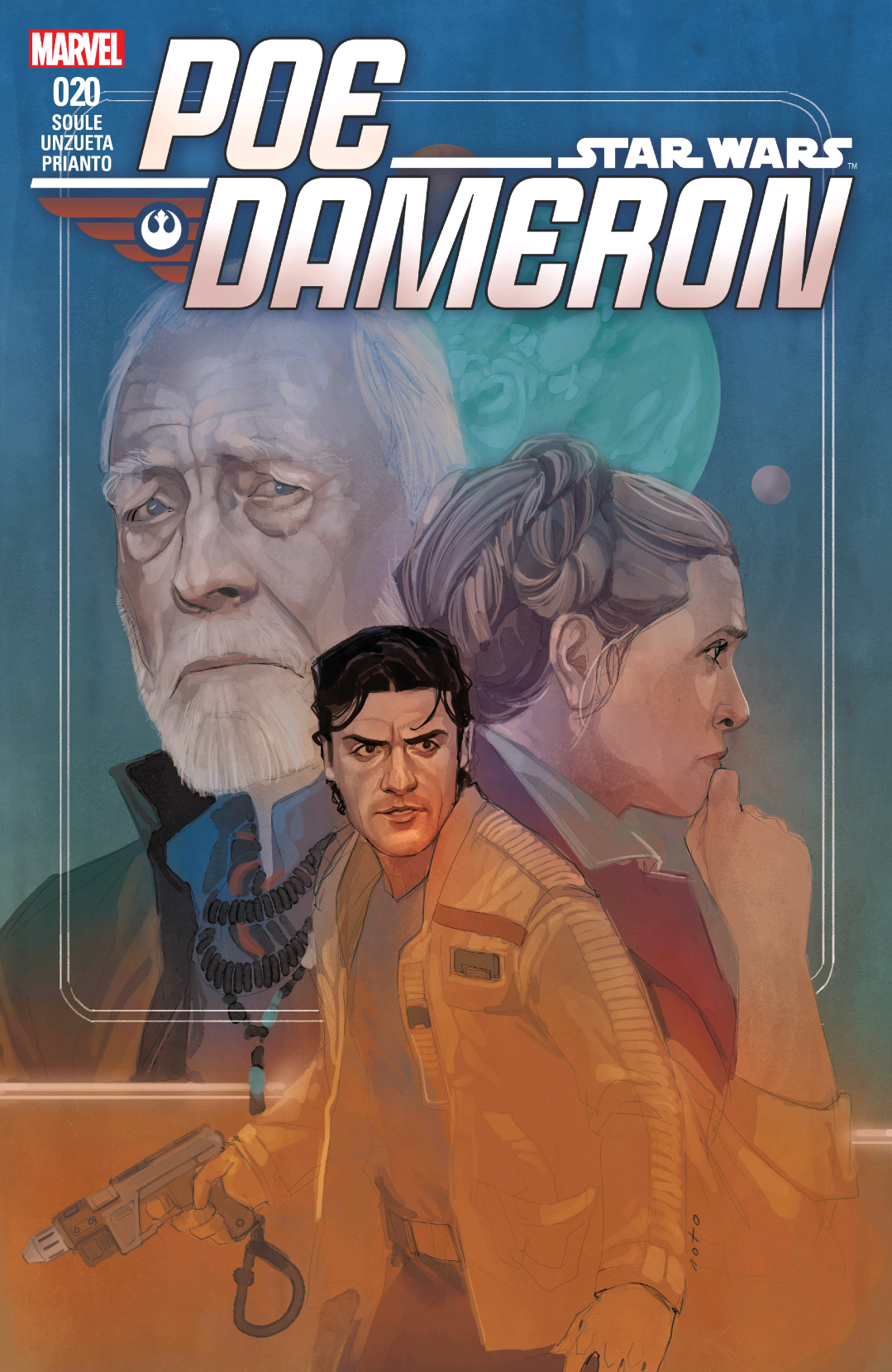 It’s Wednesday, Star Wars fans, so you know what that means – new comic book day! This week marks the release of Poe Dameron #20, and writer Charles Soule along with artist Angel Unzueta embark on a brand new adventure with Poe and his squadron. Black Squadron may be the best there is, but tensions are at an all-time high in the group as their recent encounters with the First Order have left them shaken. As the cold war with the First Order grows warmer every day, the crew must come together to rescue the Resistance’s only link to Leia’s missing Jedi brother, the adventurer Lor San Tekka!

Spoilers Ahead (scroll to skip)… 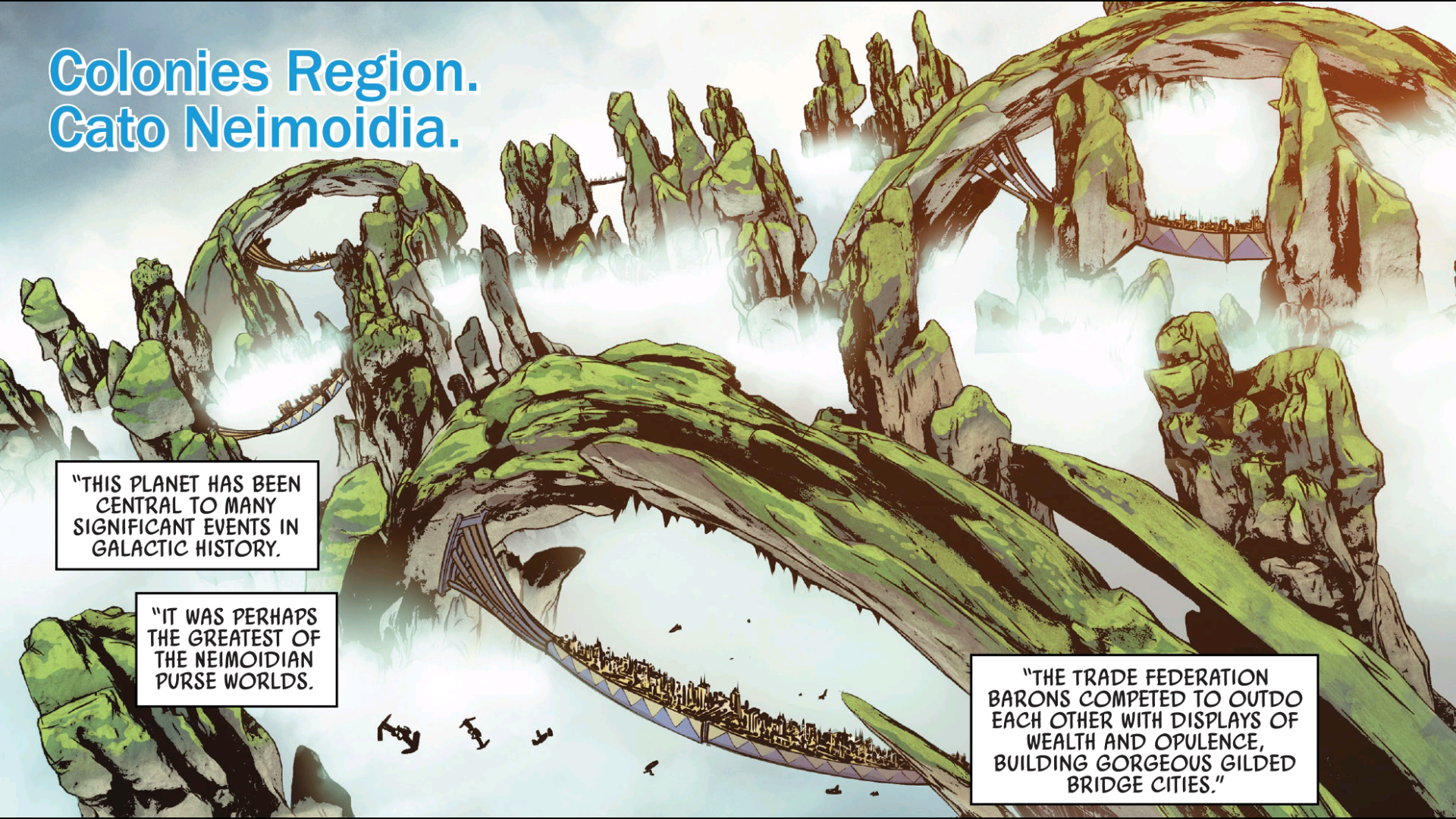 Even though finding Tekka has been an ongoing mission of Poe’s from the beginning of this series, this issue provides our first real introduction to Lor San Tekka outside of The Force Awakens. The story opens on the world of Cato Neimoidia, where we discover what has become of the former home of the Trade Federation since the end of the Clone War. Over the years, the economy on the planet has shifted in support of a new venture. The Neimodian planet is now one of the top locations in the galaxy for the wealthy to store their most rare and treasured valuables. 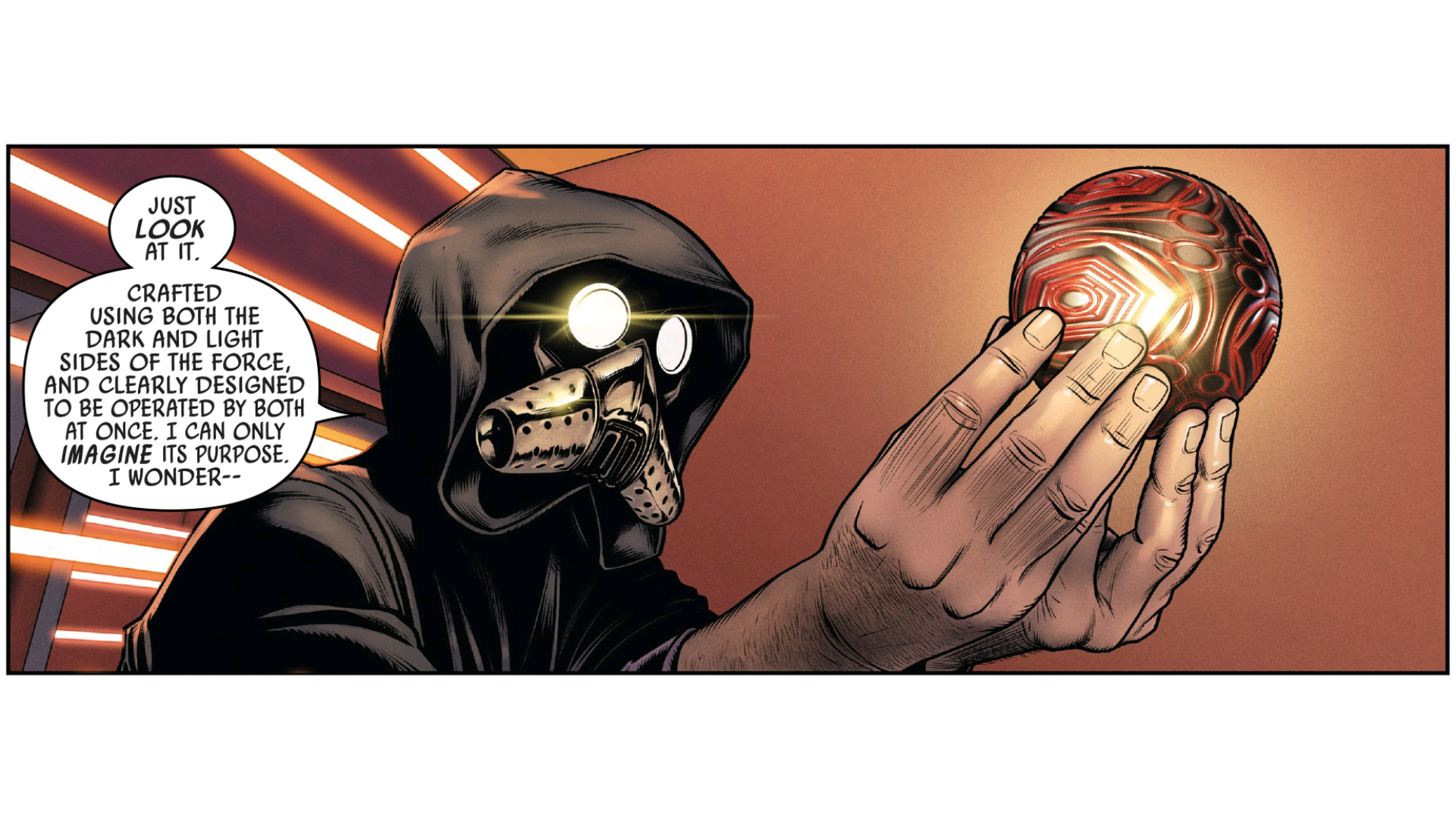 As a native Neimoidian leads potential customers on a tour of the vault, one mysterious figure slips away from the group and infiltrates the vault. The man is Lor San Tekka, and he has no intention of taking anything, he just wants a peek at a particular item. Inside the vault, Tekka opens a crate to reveal a spherical object that turns out to be an artifact created by using both the dark side and light side of the Force together. Unfortunately, he doesn’t get too much of a look when the security forces catch up to him and lock him away. 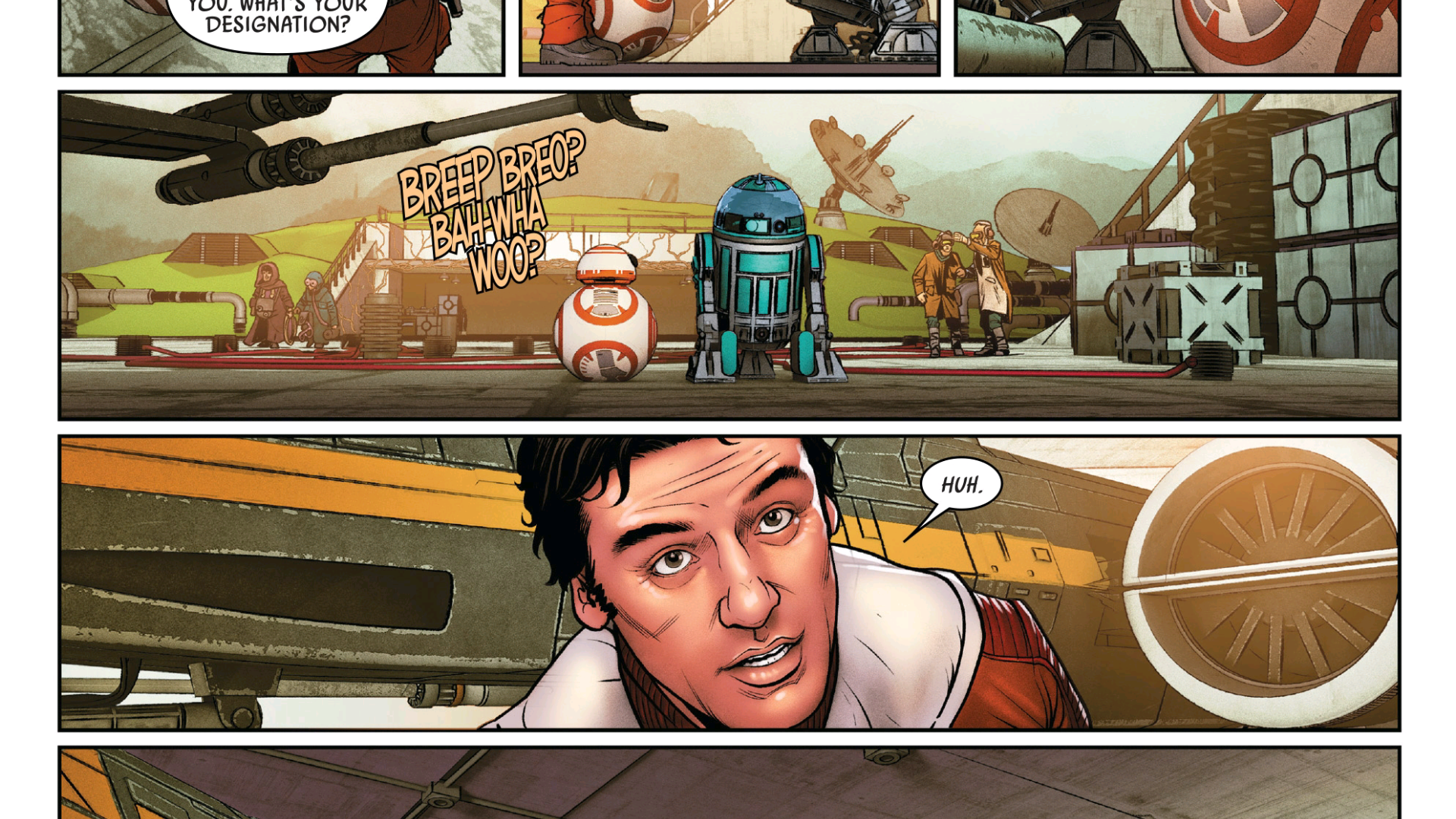 Back on D’Qar, Poe discovers that BB-8 pulled some strings with a fellow astromech to finish the repairs on his black X-Wing. Poe is surprised when he realizes that BB-8 and this new droid “Ivee” may have the droid equivalent of a romance going on. Things are looking up for Poe and his droid, but the rest of the team is a different story. We find Snap and Kare in the middle of a break-up. Kare tells Snap that they need to take a break from each other to focus on the needs of the Resistance, and Snap doesn’t take too well to the idea. To him, their relationship is exactly the kind of thing they’re fighting for, and he’s not ready to let that go. When Kare tells Snap about how the Jedi used to swear off attachments so that they could focus on their duties, he storms off in anger. 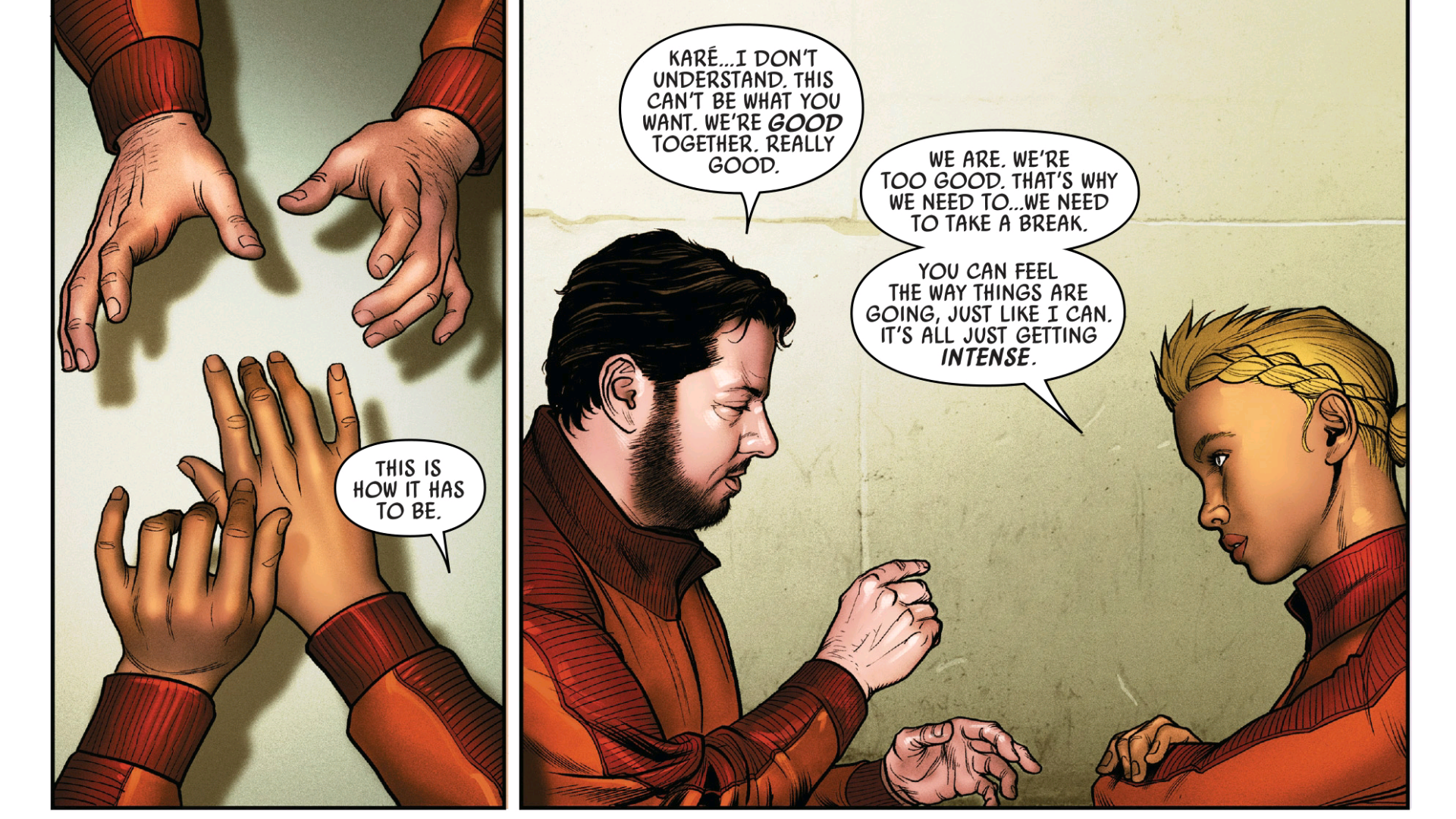 Meanwhile, Jessika Pava is still trying to find an astromech that will fly with her. A fellow pilot tries to encourage her, stating that astromechs in particular are peculiar droids. Constantly processing data, they tend to over analyze statistical anomalies (like the fact that no other pilot in the Resistance has lost more astromechs than Pava) and can end up being a little paranoid because of it. Pava attempts to meet with a group of astromechs to settle their superstitions, but the meeting doesn’t go as she had hoped. 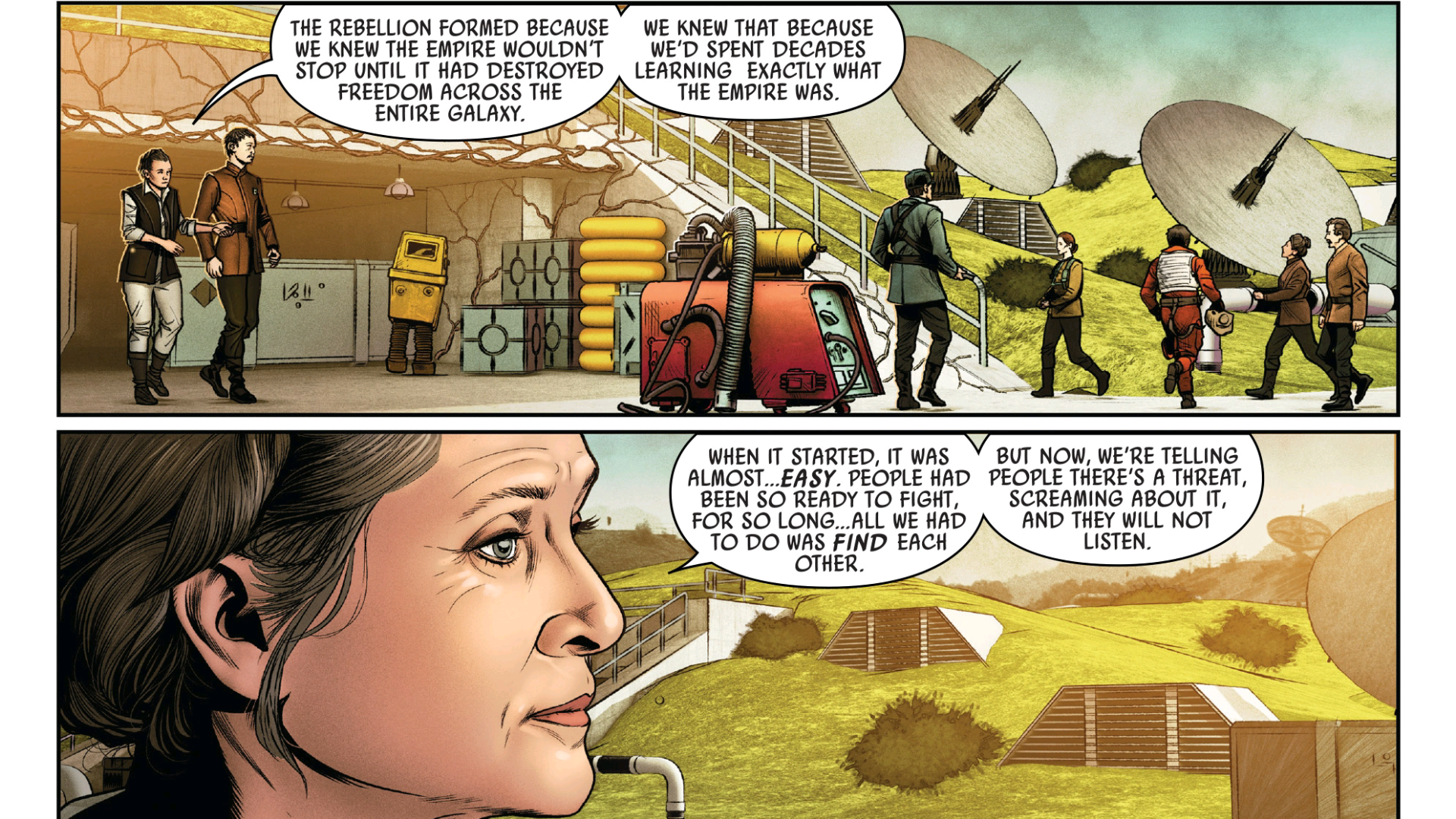 As the General voices her worry to Admiral Statura about the precarious position of the Resistance, C-3PO approaches her with a shred of hope. Monitoring the locations that Grakkus the Hutt had provided them, he has discovered Tekka’s location on Cato Neimoidia. Leia summons Poe and his squad to go after Tekka, but things don’t look too promising as she senses the negative energy in the group. Nevertheless, they have an important mission ahead of them; hopefully they can pull it together and do what needs to be done.

Well, it looks like this could possibly be the beginning of the end for the Poe Dameron comic. Marvel and Soule have yet to announce their ultimate plan for this series moving forward, but as the timeline draws closer to The Force Awakens, I have to wonder if this may be the last story arc in the series. If the series continues, will we it be set post-The Force Awakens or perhaps even after The Last Jedi? We can only speculate, but for now, it seems that they are very close to catching up with the adventurer and completing their mission.

I have my doubts that the mission will be successful though, considering that Poe doesn’t meet up with Tekka until Jakku at the beginning of The Force Awakens, but perhaps they do rescue the adventurer and set up a later meeting in the Jakku village. We know where this story is headed, but I am looking forward to seeing how we get there. As first issues in a new story typically go, this one does about what you’d expect, setting up the plot and reminding the reader just what’s at stake. But even though the fate of the galaxy teeters on the edge of a vibro-blade, it was nice to see some more personal moments with the characters, particularly with Snap and Kare. 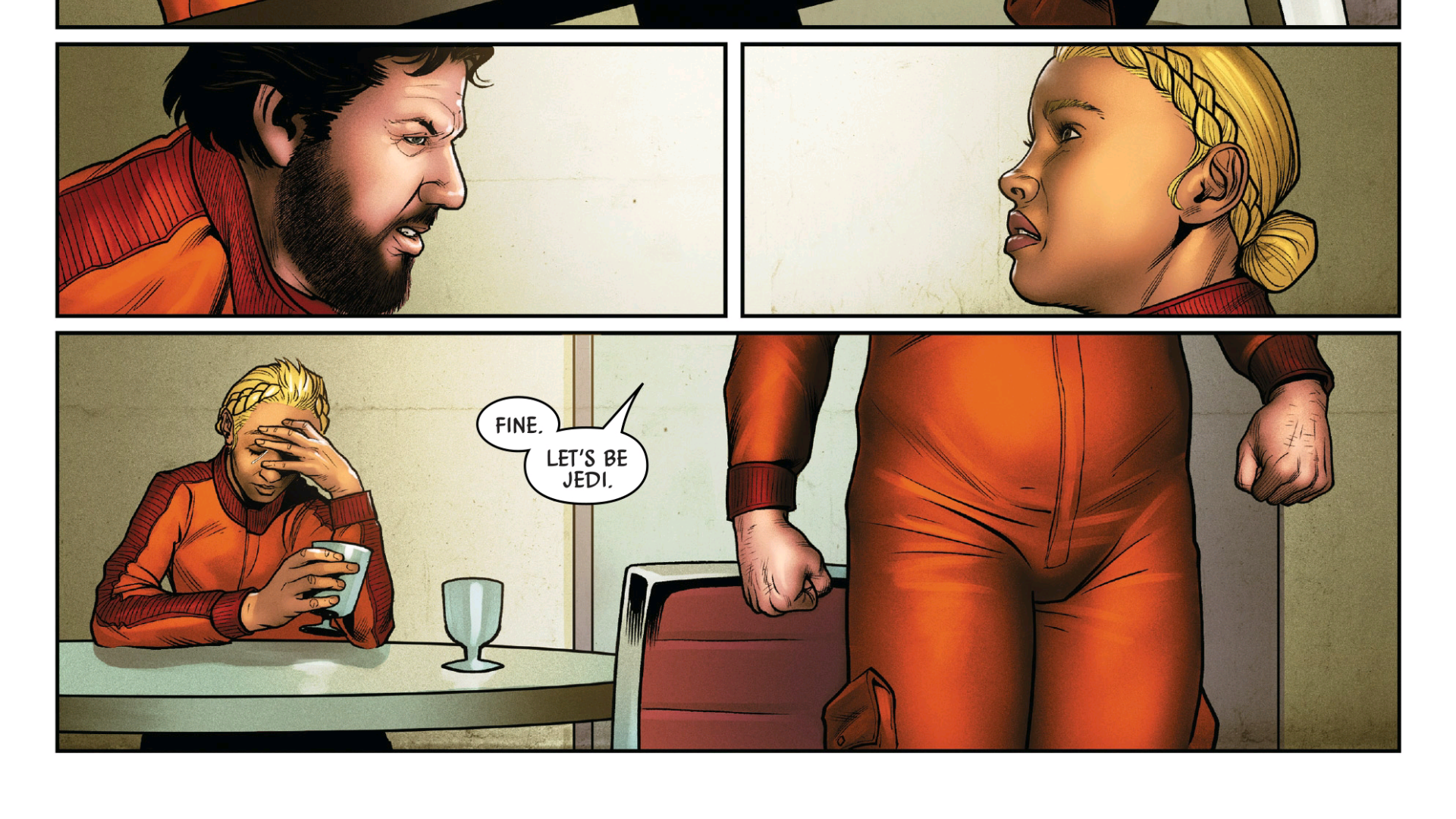 Of all the things that can put a strain on a relationship, I think fighting a war is probably pretty high up on that list, and although I understand Kare’s motivation for her decision, I also understand Snap’s anger and disappointment. Kare may have intended to increase their focus in the fight, but I have a feeling it will only make things worse for Snap. I’m rooting for the couple, but I gotta admit, I’m concerned for Kare’s future as we know she doesn’t show up in The Force Awakens.

Poe Dameron might not sell as many issues as Darth Vader or the main Star Wars title, but it’s a solid series with good writing and fantastic artwork. This issue is pretty promising for what’s in store for Poe and his friends over the next five months or so, and I think we’re off to a great start. It will also be interesting to learn the significance of the artifact that got Tekka into his predicament. If you are a fan of Star Wars: Rebels, than you know that it’s possible to combine a Jedi and Sith holocron; perhaps this new object is the result of a successful merger of the two. If so, I find it interesting that it is spherical in shape.

“Without the Jedi, there can be no balance in the Force.” – Lor San Tekka

Whereas the Jedi holocron is a cube and the Sith holocron is a pyramid, this new object, being a sphere, is perfectly uniform and balanced with no hard edges, which I think supports Tekka’s own understanding of the Force in The Force Awakens. He knows that the First Order has risen from the dark side and that only through the restoration of the Jedi will there be balance again. There’s been a lot of emphasis on the word “gray” in fan circles when talking about the Force in the sequel trilogy, but as Tekka’s view continues to illustrate, I don’t think that’s the best way to describe it. There is light. There is dark. But balance is key, as Rey points out herself in the teaser trailer for The Last Jedi:

Granted, Luke does suggest in the teaser that the Force is so much bigger than just the balance between the light and the dark, so who knows. Hopefully, we’ll learn more about this mysterious artifact in the near future and perhaps even see it in action. Is it truly an amalgamation of a Jedi and Sith holocron? Or is it something new? Or maybe… 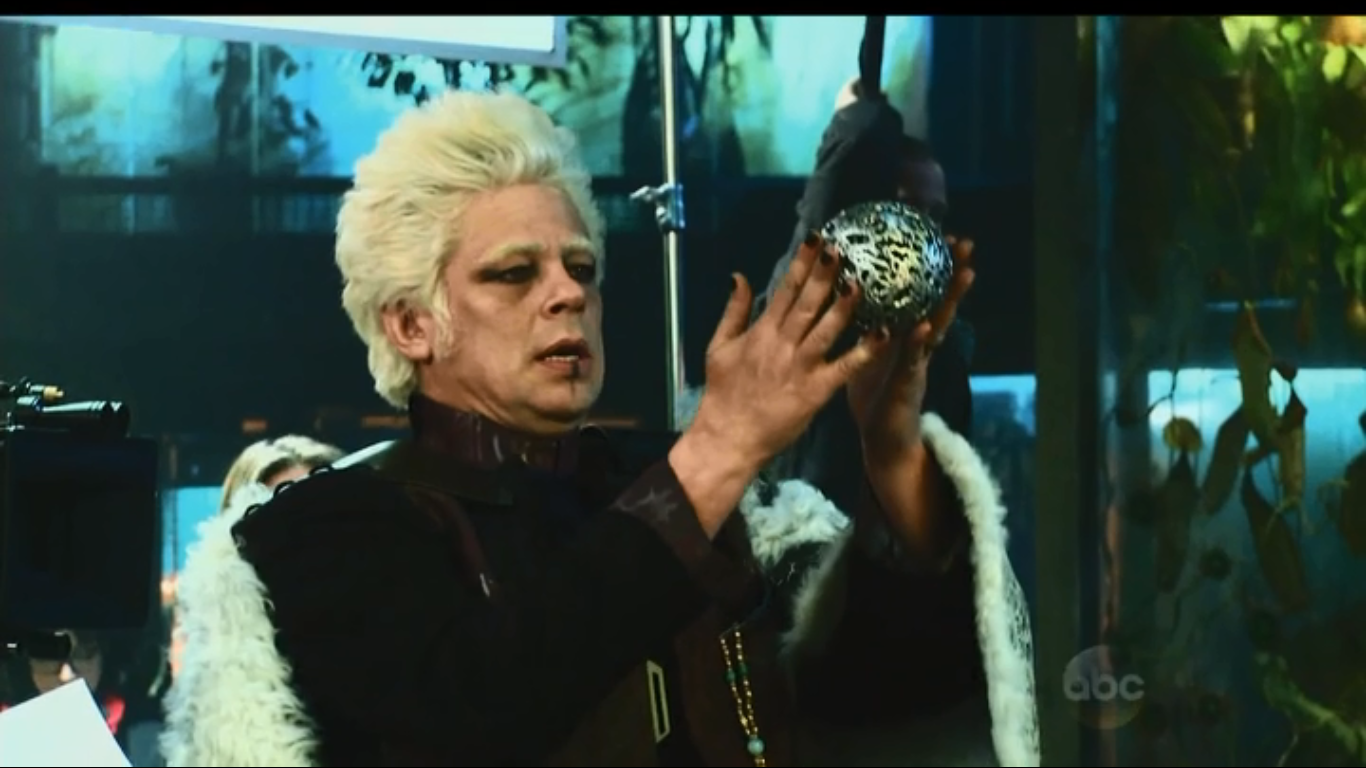 What’s DJ doing with the Jedi/Sith artifact?! Oh wait, wrong franchise. Anyways…for a first issue in a new storyline, this one was a great read, and I recommend it as a jumping on point for the series if you haven’t been reading already. Soule continues to give us a great story, adding depth to the leaders of the fight against the First Order, while Unzueta’s smooth realism continues to impress.

Poe Dameron #20 is available now in a comic shop near you or online at Comixology. Happy reading comic fans! 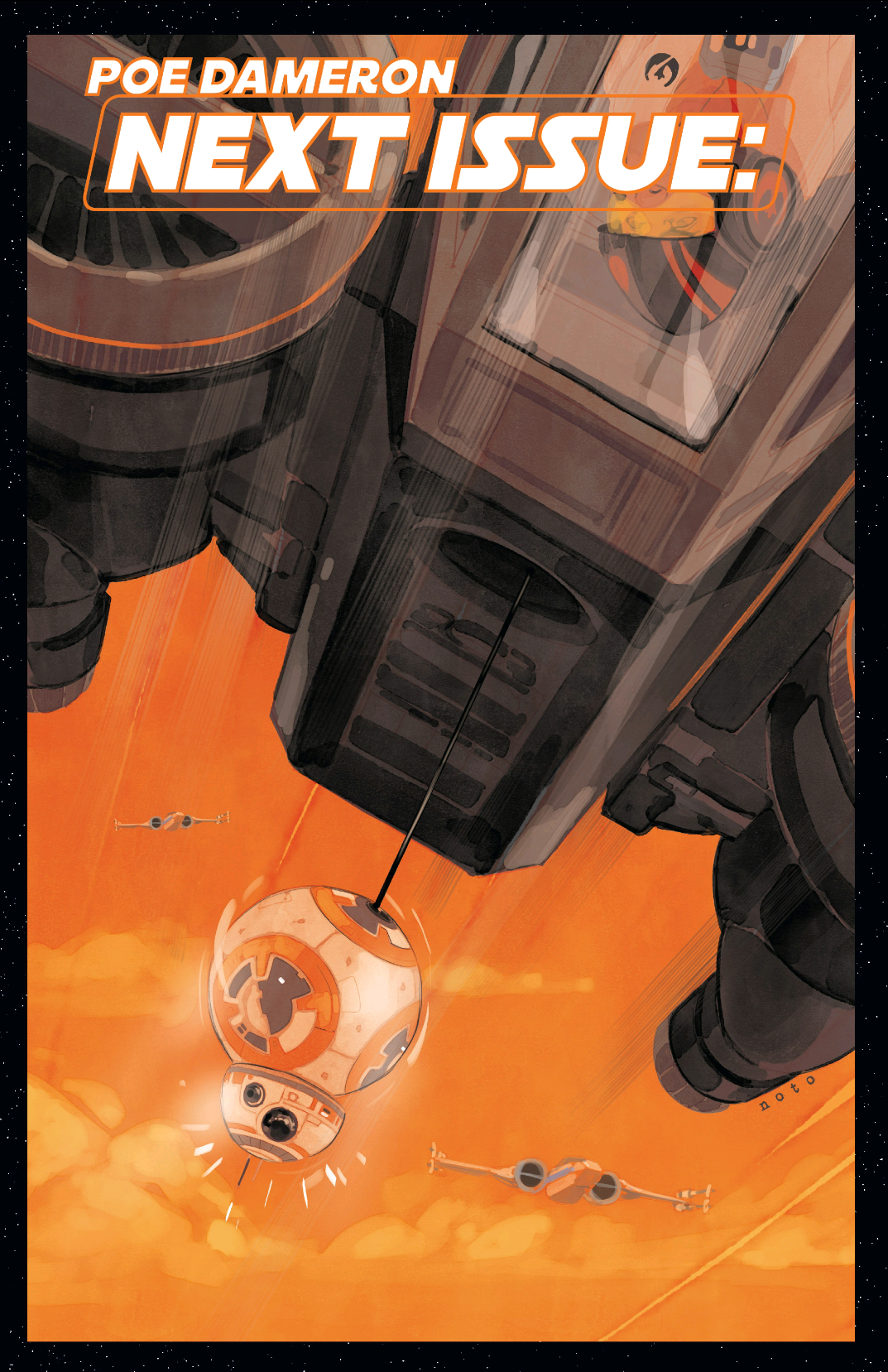 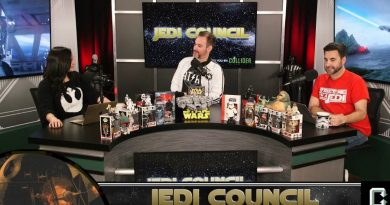 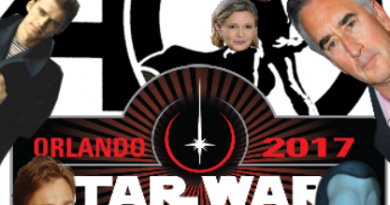 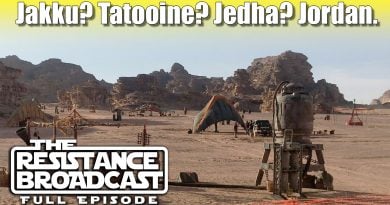