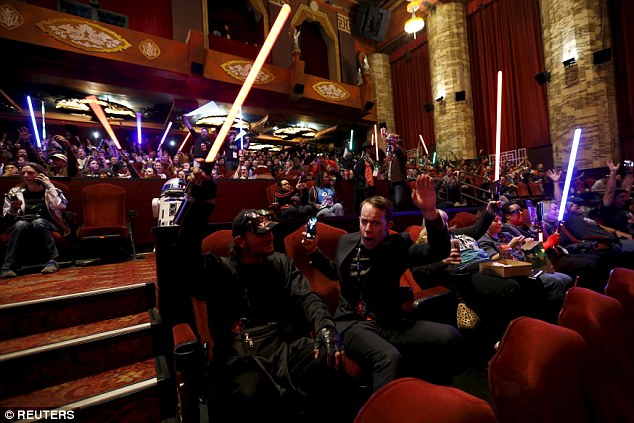 Most people who have seen a film in theaters in the last decade are familiar with the “First Look” content that plays before the trailers start running at many of the large theater chains. Well, according to The Hollywood Reporter, the series is ending very soon and being replaced by the new preshow “Noovie”. Disney has reportedly cut a deal with National CineMedia to provide Behind The Scenes content for the program.

THR reports that Disney will start rolling out the content this Friday as they premiere a behind the scenes feature for the upcoming Pixar release, Coco. But the article also specifies that behind the scenes content for both The Last Jedi and the as yet untitled Han Solo film are also included in this deal, so it would make sense that we will see some exclusive Star Wars content rolling out soon.

The Disney-National CineMedia partnership will run at least through June 2018, and subsequent content the conglomerate will provide for Noovieincludes exclusive behind-the-scenes looks at Star Wars: The Last Jedi, Black Panther, A Wrinkle in Time, Avengers: Infinity War, The Incredibles 2 and the still untitled Han Solo movie.

The company will also be launching a website for “Noovie” content, so it is likely that you will be able to access the Star Wars features through the website if you don’t make it to the theater to see them.

Head over to THR for the full piece.

What Show are you currently watching?
By: GRIMLOCKE
4 hours 19 minutes 49 seconds ago
Force ghosts in the new canon
Force ghost are capable of doing almost anything now, as we've seen in TLJ. I believe though that force users or...
By: Luke556
5 hours 25 minutes 53 seconds ago
The Redemption of Ben Solo: Does it Work?
His redemption story was pretty odd. He basically looses a fight with Rey and then she heals him for some...
By: Luke556
5 hours 52 minutes 6 seconds ago
Is there a canon rift?
I would prefer more ST references even though I dislike the sequel trilogy. I like the worldbuilding aspect. If they went...
By: Luke556
6 hours 4 minutes 59 seconds ago
How do we know Palpatine is really dead?
I wouldn't put it past them to revive him once again for another trilogy in the far future. Hollywood favors...
By: Luke556
6 hours 16 minutes 46 seconds ago
Dune (Denis Villeneuve)
Well, that, at least, is 100% correct, sir ;)
By: Angelman
6 hours 19 minutes 16 seconds ago
Dune (Denis Villeneuve)
it, but someone could decide the film is so good they greenlight part two a week before the film...
By: Porco Azzurro
6 hours 20 minutes 54 seconds ago
Midichlorians worse than anything in the ST
I agree, the force doesn't need a biological explanation. Sometimes I wonder if this was pushed further by liberals involved...
By: Luke556
6 hours 29 minutes 36 seconds ago
I've spent over 100 hours making this... hope you enjoy.
Is that your channel also or did they post it on behalf of you? Cause that's a pretty impressive audience.
By: Luke556
6 hours 50 minutes 9 seconds ago
What Show are you currently watching?
By: Angelman
7 hours 36 minutes 32 seconds ago
Last Movie You Watched
By: MandoChip
9 hours 14 minutes 59 seconds ago
Dune (Denis Villeneuve)
Unfortunately, we know with 100% certainty that it will not end with such a upbeat message. Legendary & WarnerBros have...
By: Angelman
11 hours 39 minutes 9 seconds ago
Dune (Denis Villeneuve)
I’m hoping it ends with a simple piece of text on the screen “To be continued in Dune: Part Two...
By: Porco Azzurro
12 hours 42 seconds ago
Your thoughts on Attack Of The Clones
Meant to say I-VI !!
By: ManaraiJedi
14 hours 8 minutes 38 seconds ago
The Newest Slate of High Republic Novels Have Been Announced at San Diego Comic Con.
to check out and comment on this topic on our main site
By: SWNN Probe
15 hours 17 minutes 45 seconds ago