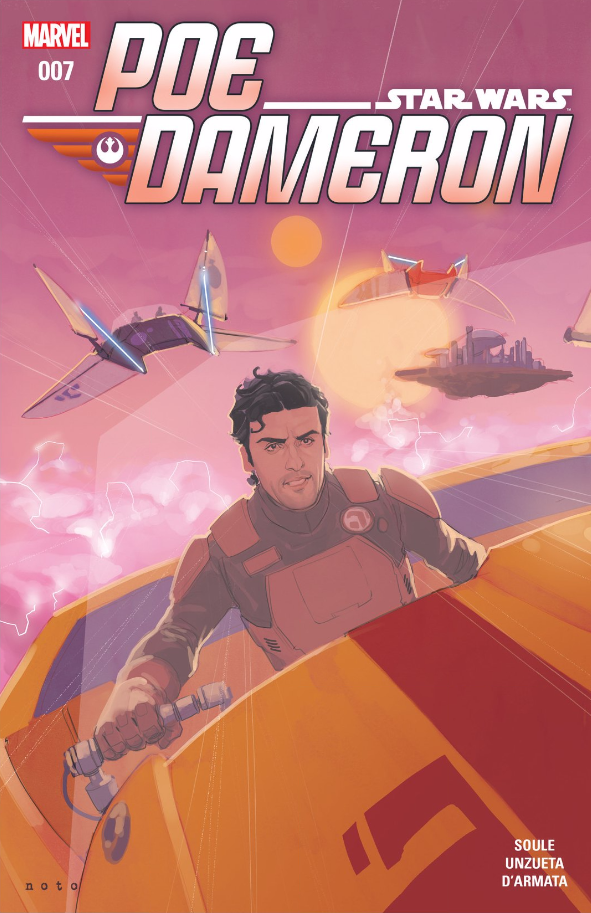 A brand new arc begins this week in the ongoing Poe Dameron series with issue #7 by writer Charles Soule. This new story adds Spanish artist Angel Unzueta, who brings something fresh of his own to an already excellently illustrated book. In the wake of his encounter with Agent Terex and the First Order, Poe makes a social call to the planet Pheryon to meet an old friend, but not all is as it seems. Spoilers ahead… 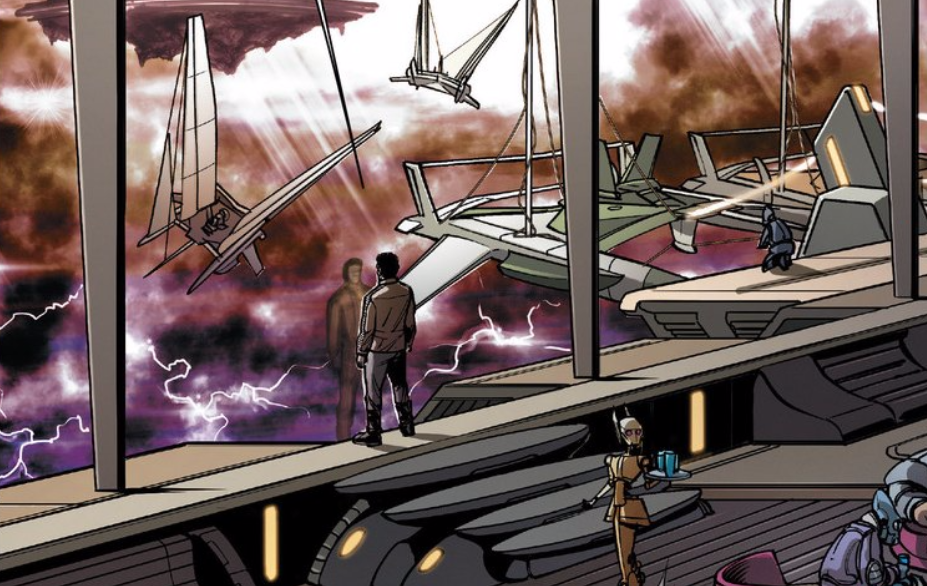 The story begins with Poe staring through a large glass panel out into the stormy landscape of Pheryon.  Floating islands can be seen in the distance as Poe awaits the arrival of his friend.  As Poe continues to stare out into the skies, his old friend and navy comrade, Suralinda Javos surprises him from behind. 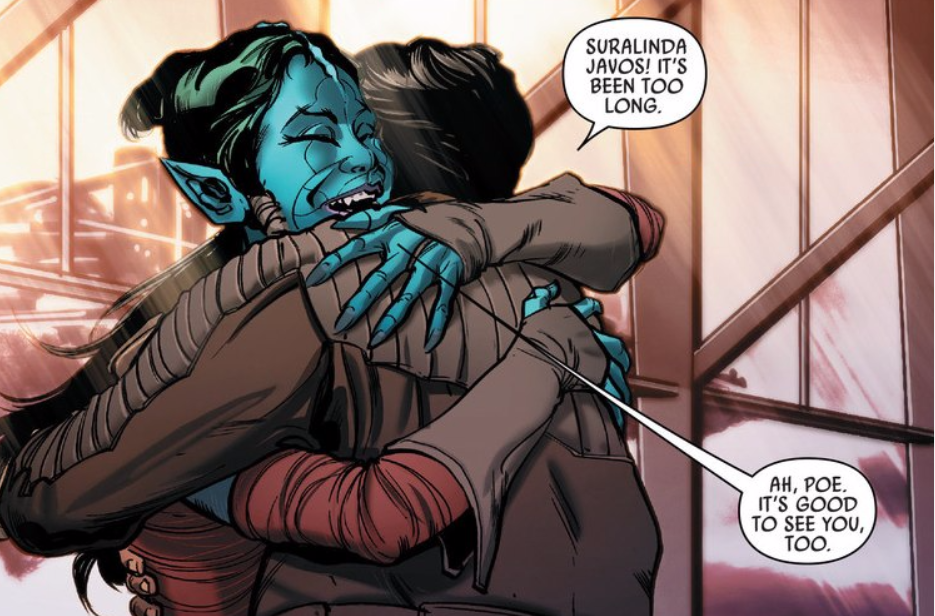 The two exchange small talk and sit down to catch up over drinks while preparing to enjoy the stormsail race that is about to begin outside. Suralinda is a blue-skinned Squamatan, a reptilian humanoid with pointy ears, a forked tongue, facial scales, and a Klingon-esque ridge on the top of her head that works as a natural part for her long hair. Sura left the Republic Navy in order to pursue a career in investigative journalism, a job that has garnered her a reputation, as well as a few enemies.

Sura uncovers secrets for a living, and she exposes them to the galaxy for profit.  Naturally, this puts quite a target on her back, and this time, she finds herself facing the wrath of the First Order. Sura claims to have uncovered a huge secret that the First Order is hiding.  Apparently they are building something big (which I assume to be Starkiller Base).  Sura wants Poe to take her to Senator Organa so she can sell the information to her. 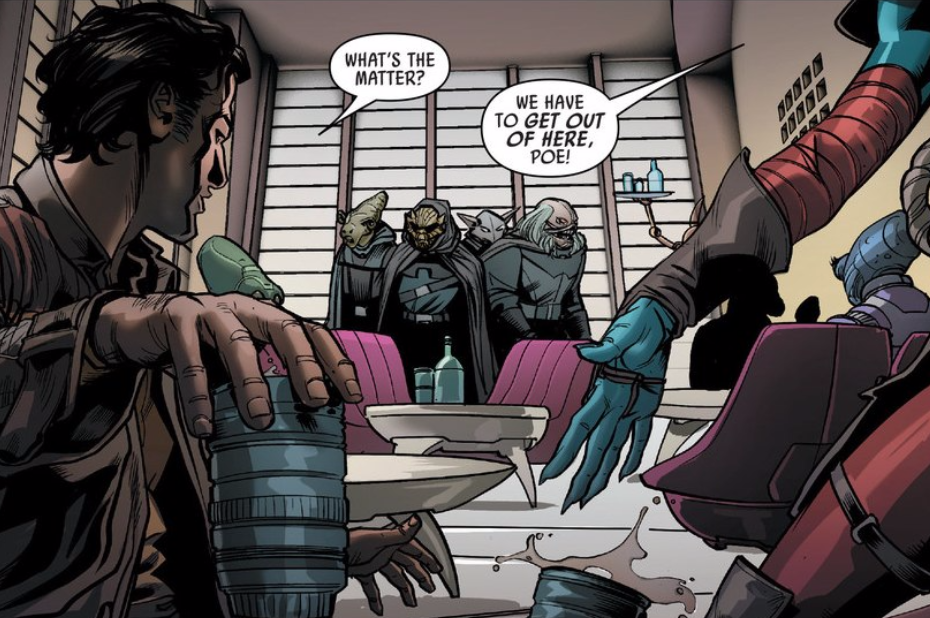 During their meeting, some bounty hunters show up and open fire at Poe and Sura, forcing them to leave in a hurry.  Poe “borrows” a stormsailer and outruns their predators. Unfortunately, the First Order Security Bureau shows up and captures the pair, killing everyone around them to cover their tracks.  The First Order is desparate to remain under the radar at this point and they’ll do anything to keep their big secret from getting out. 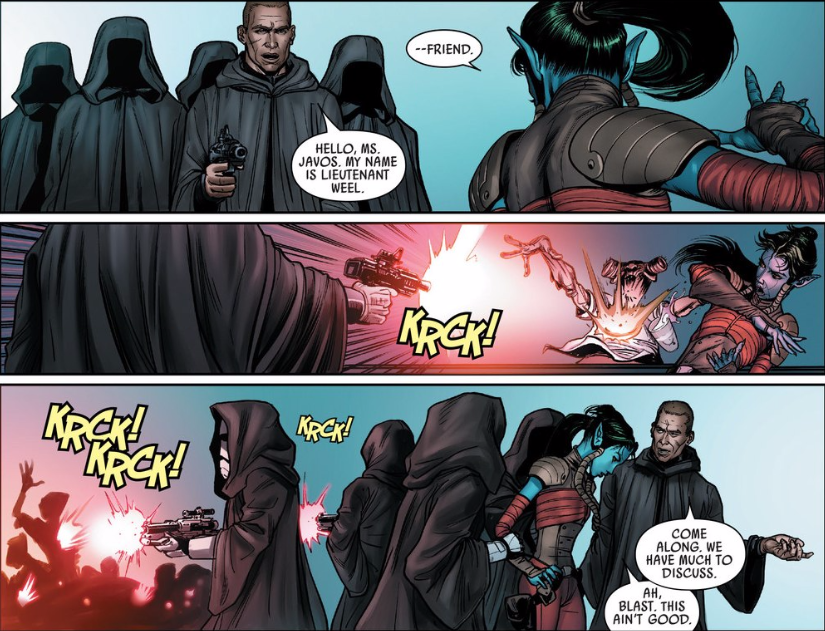 Unknown to Lieutenant Weel of the FOSB, the Squamatan species has a unique defensive capability. They can spit an acidic venom from their mouth to incapacitate their enemy, which is exactly what Sura does to Weel before rescuing Poe and escaping with him in a First Order transport.

Poe then takes Sura to the hidden Resistance base on D’Qar to meet with “General” Leia.  In a twist of expectation, it is revealed that Sura actually hired the bounty hunters and paid off the Pheryon security forces in order to manipulate Poe into revealing to her the location of the Resistance base so she could deliver the information to her editor. 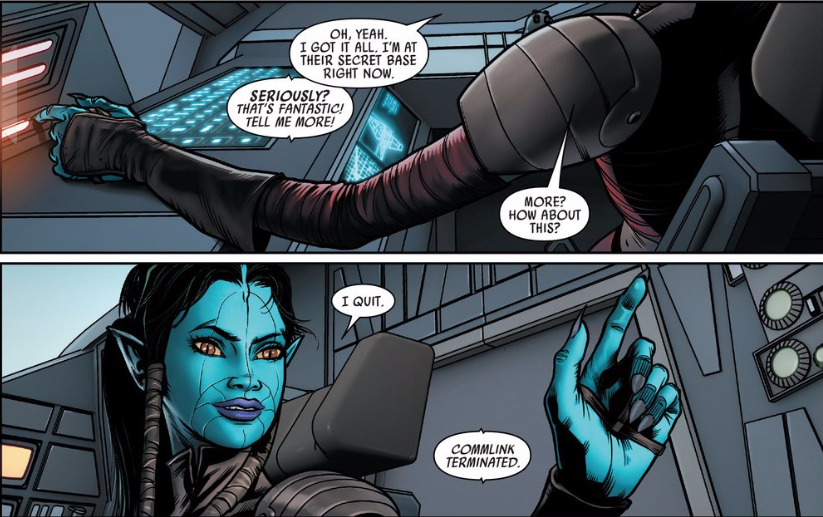 However, after her run in with the First Order, and realizing how much of a threat they are to the galaxy – resembling the Empire that once enslaved her people – she decides to quit her job instead and join the Resistance. 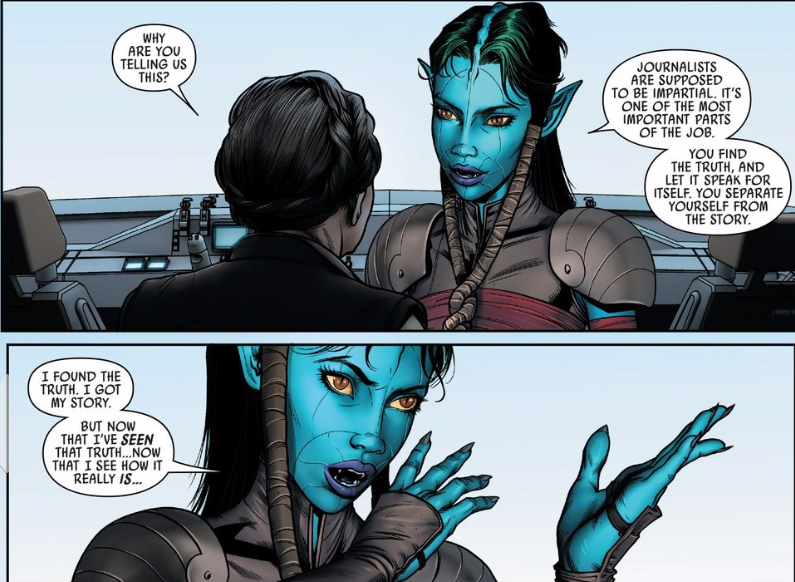 After a great first couple of issues in this series that ultimately led to a moderately good finish to the first arc, this issue gives the ongoing book the jumpstart it needed, moving the story in a new direction. This entry proved to me that Poe Dameron could still have a lot of a lot of really cool stories down the line, for however long the run may last.  Soule continues to capture the essence of the Poe Dameron that we saw in The Force Awakens and to flesh out the cold war between the complacent Republic and the rising First Order. 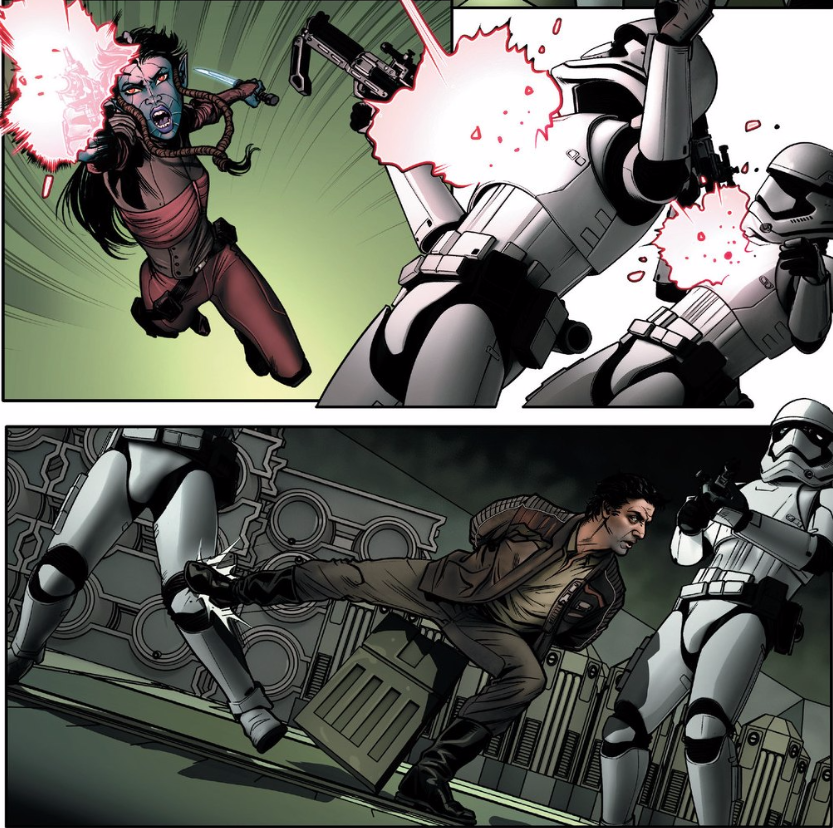 While this issue didn’t do much in the way of continuing the larger story (we still don’t know if there is a traitor on Poe’s squad or anything else about Lor San Tekka’s whereabouts), it did introduce us to a promising new character in Suralinda Javos.  It will be interesting to see what part she may play down the line.  Does she really know anything about what the First Order may be doing in secret? Time will tell.

If you like this series, definitely check this issue out. If you didn’t like where the story went in the last couple of issues and are questioning whether or not to hang on – give this one a read – you may like where it’s heading.  I for one am hoping that this series does for the Resistance what Star Wars: Rebels  has done for the rebellion. After a rocky finish to the first chapter, chapter 2 looks like it’s off to a good start.  We’ll see where it goes next month when Poe and company come face to face with Terex once again. 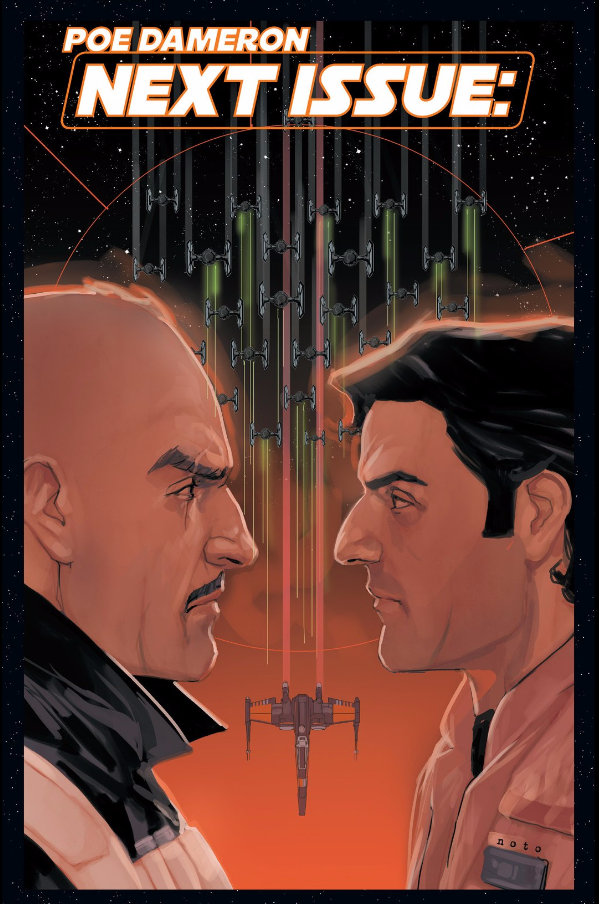