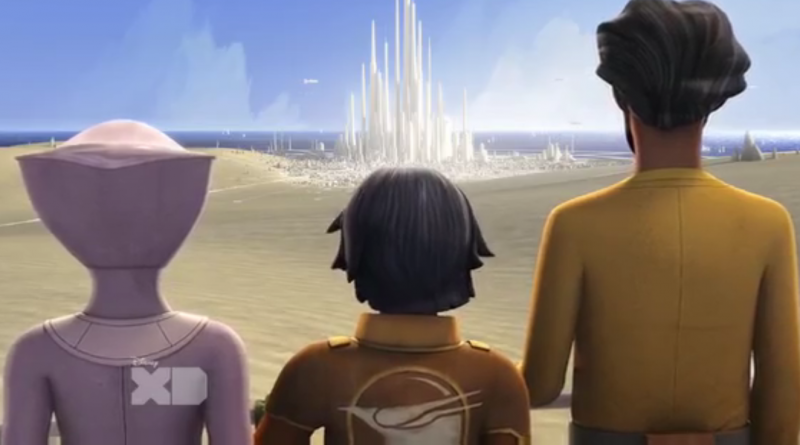 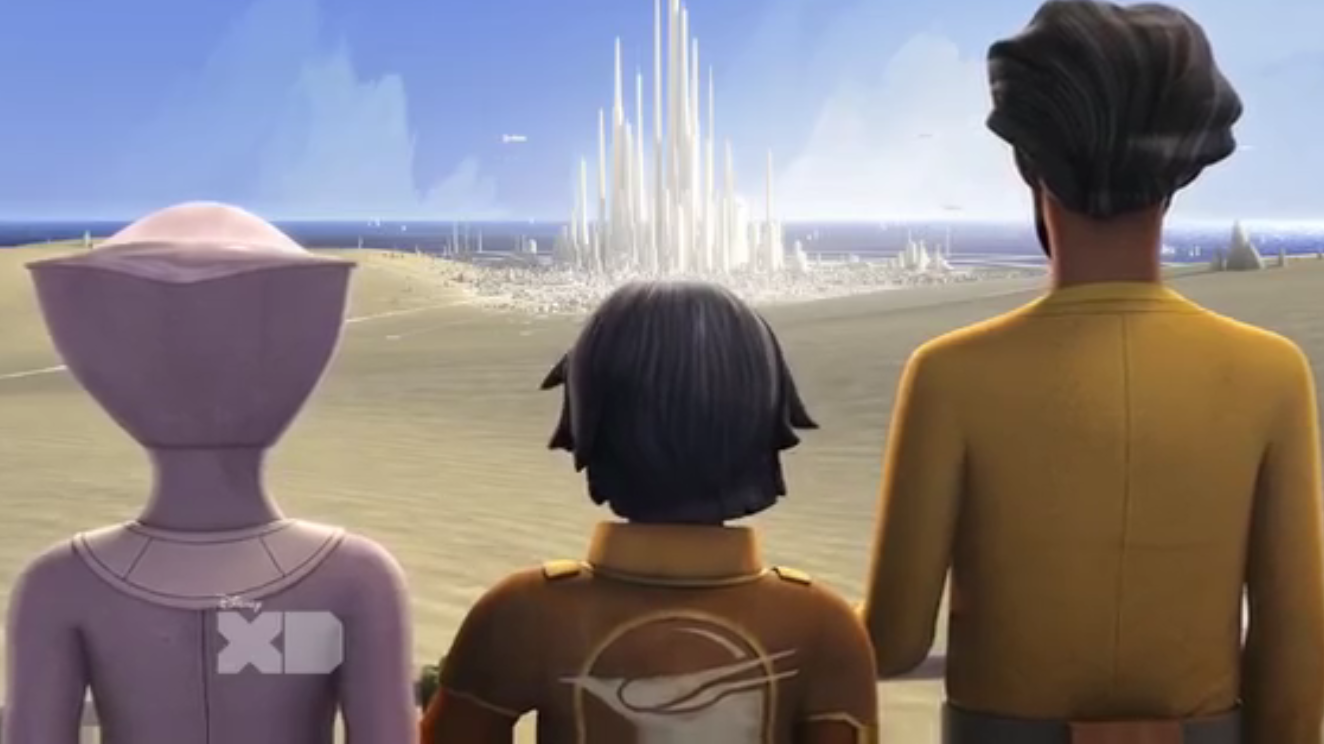 It feels like season 2 of Rebels has finally hit its stride, right as we’re coming up on a short break. This week we saw the fallout of the Imperials discovery of rebel activity on Lothal, more dark side foreshadowing for a certain young padawan and the completion of the dangling plot thread regarding Ezra’s parents. Read on for more about the final episode of 2015. Beware of SPOILERS

The fate of Ezra’s parents is something that has been teased since around the midway point of season 1. Tseebo passed some info on to Hera, yet neither the audience nor Ezra were privy to this before this week’s episode. It seemed inevitable to me that we’d learn of their demise. Having them be alive would have sent Ezra’s character arc off in a whole new direction than what has been foreshadowed. 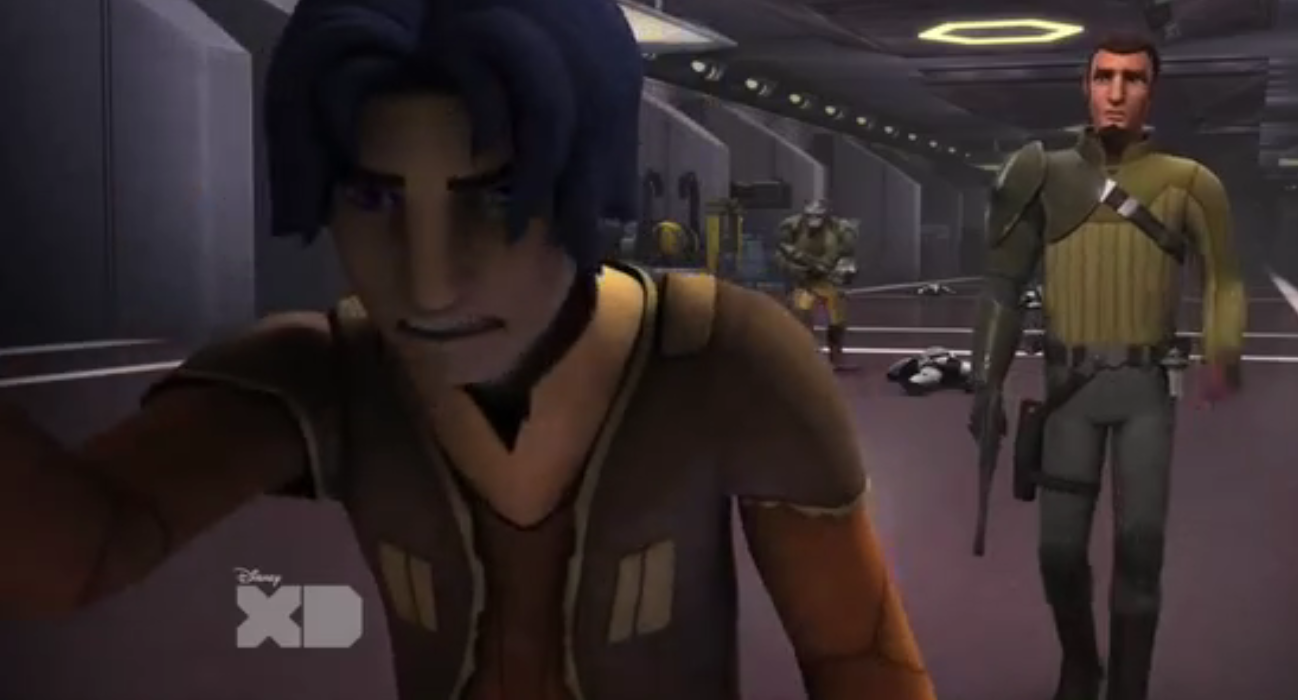 I’ve been on the fence for awhile on the idea that Ezra will eventually turn to the darkside. At times I thought it seemed certain and at others not so much. To my mind, the subtle hints and foreshadowing make an eventual descent into darkness seem highly probable. Chief among these signs and portents is of course the episode where Ezra used the darkside to call a massive fyrnock to attack the Grand Inquisitor. Other clues include a subtle dip into the Imperial march music during the encounter with Gall Trayvis, accompanying a menacing look given by Ezra to the rebel imposter. This week, Ezra’s rage and fear of loss caused him to unwisely charge at both Inquisitors with lightsaber drawn. I personally find it hard to believe that these moments aren’t intentionally giving us a glimpse of the shape of things to come.

We start things off with Ezra having a Force vision of his parents locked away in an Imperial prison. During the vision, Ezra also glimpses a mysterious figure brandishing a blaster rifle, himself doing some pretty nifty acrobatics with lightsaber in hand and a white lothcat. The young padawan immediately seeks out his master and excitedly recounts his vision. 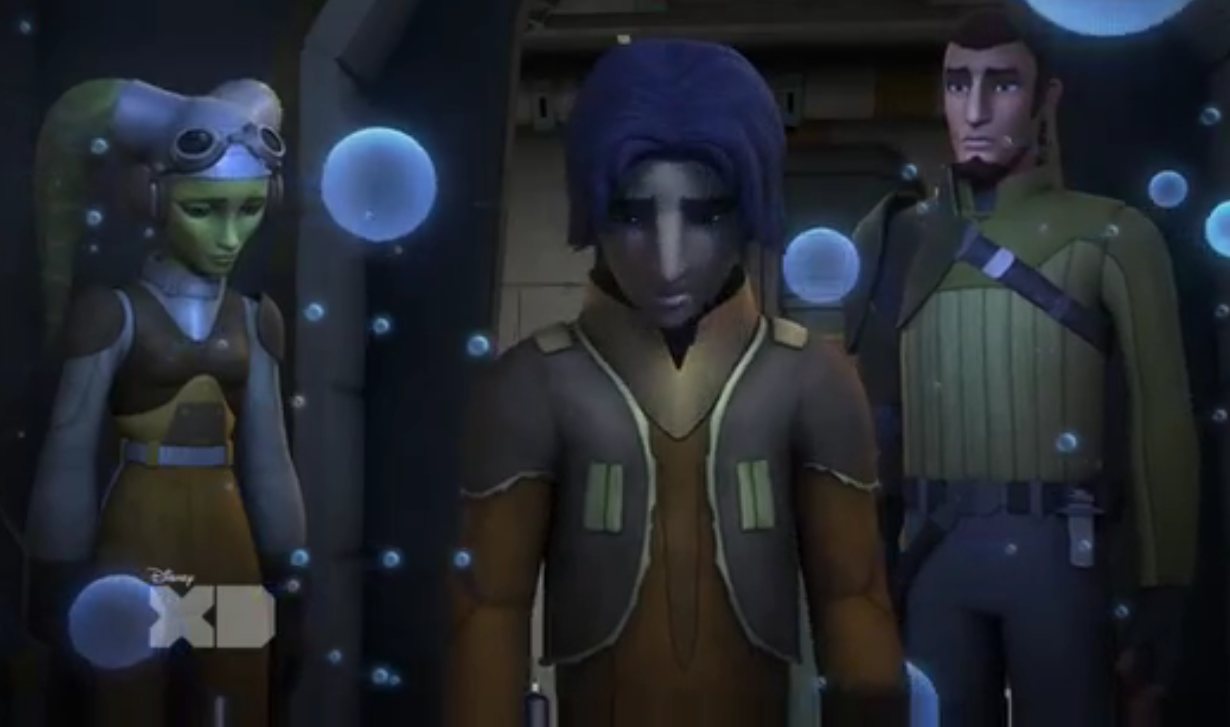 Hera and Kanan decide it’s time to fill Bridger in on what they know of his parents’ fate. It turns out that Tseebo was able to learn that the Bridgers were being held in some Imperial prison. The problem is … there are over a thousand of said location in the galaxy. To make the task of locating Ezra’s parents even more difficult, the Imperials have erased the names and images of all prisoners. Ezra uses a Jedi technique under Kanan’s guidance, to zero in on prisoner “X10”, who just so happened to be held on Lothal. We also learn of a prisoner uprising at the prison on our rebels’ old base of operations. Ezra is certain his parents were involved in this.

The crew decide to make their way to Lothal to investigate. What about the Imperial fleet in orbit, above the planet. No problem, the fleet left this morning. The audience knows where to after seeing a meeting between Kallus, Konstantine and the Inquisitors, where Konstantine is ordered to send the fleet to deal with the rebel prescence on Garel. 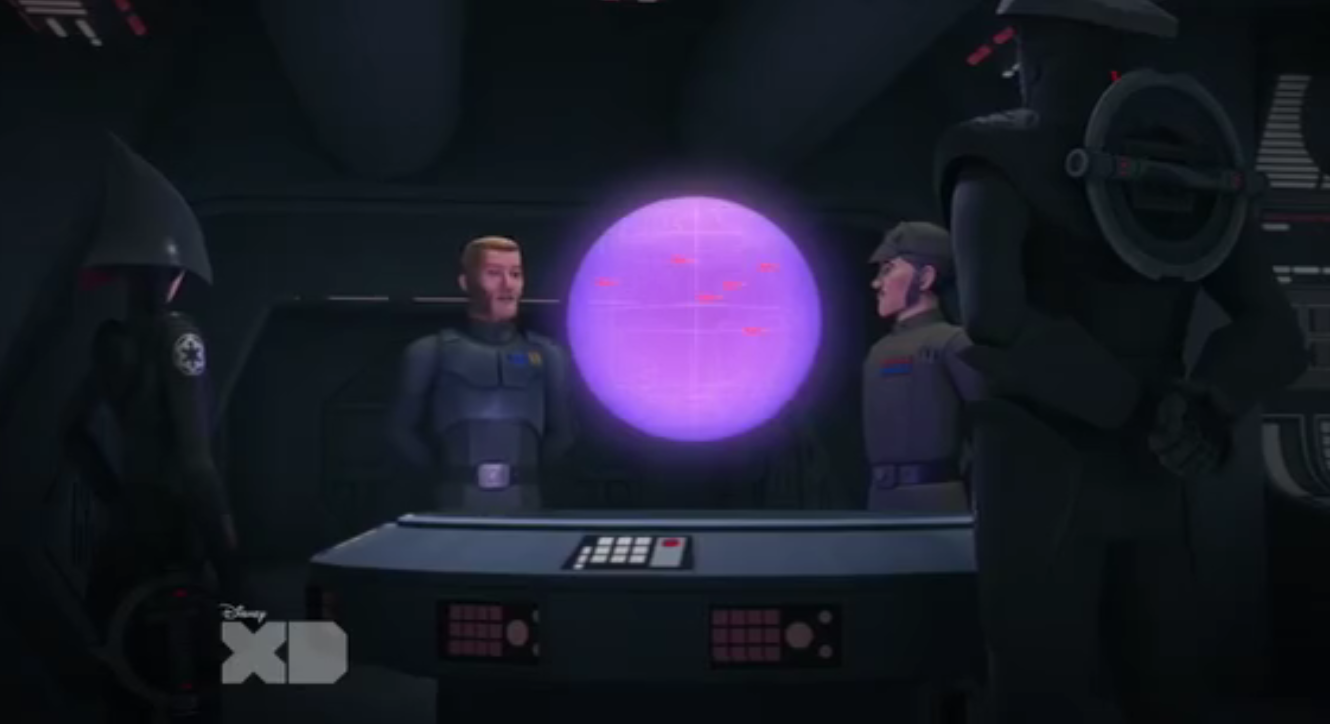 As our crew prepares to depart for Lothal, the Imperials arrive in force above Garel. Ezra and Kanan take the Phantom en route to their old home, while the rest of the crew (minus Rex, who’s on board the command ship) are on board the Ghost. The Imperials decide to make capturing the rebel command ship their priority and get it locked up in a tractor beam. Hera manages to ram the tractor beam emitter off of the Star Destroyer with the lock, in a very risky maneuver.  It pays off and the command ship is able to escape into hyperspace. 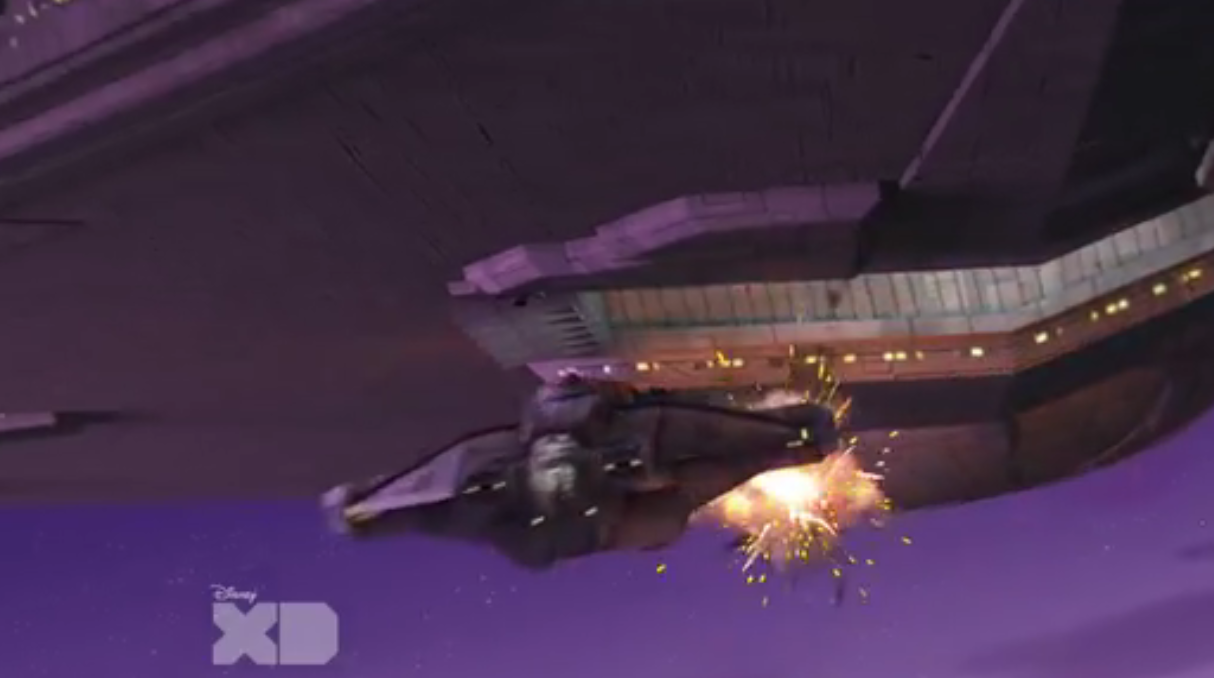 On Lothal, Kanan and Ezra have to sneak around the planet. Yes, the Imperial fleet has moved on to Garel, but there is still a strong presence of stormtroopers. They arrive at the Ezra’s childhood home, only to find it burned to the ground. Their search isn’t fruitless, however, as the white lothcat from Ezra’s vision appears out of a hole in the ground. The two cowboy Jedi manage to track it through the city, to find themselves under fire by a sniper. Ezra is able to talk him into lowering his rifle after bringing up his parent’s names.

We learn that prisoner X10, Ryder Azadi, used to be the mayor of Capital City. He was in fact a supporter of the Bridgers’ message of hope. Unfortunately, we learn the truth that I think many were expecting, the Bridgers have moved on from this plane of existence. They died heroically an escape from the Imperial prison on Lothal. They rallied their fellow inmates after being inspired by Ezra’s transmission from the first season. 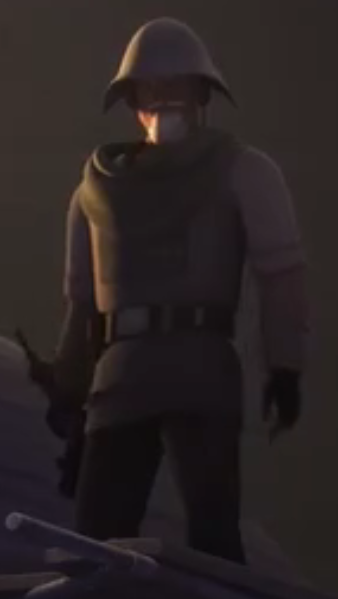 There is a silver lining to all of this, as Ezra is able to say goodbye to his parents via the Force. He’s able to feel their Force signature and learn how proud they are of him. Kanan comforts Ezra with the knowledge that his parents are still part of the Force and that they live on inside their son.

Story is starting to pick up.

The longer season has led to the pacing being a bit of a slow burn so far, yet we’ve had some good momentum building up via the last couple of episodes. It’s clear that the two main plotlines this year are the investigation into the Sith Lord and the rebels need to find a new base of operations. We got plenty of movement on the first one last week and the rebels being forced off of Garel surely adds intensity to their search for new headquarters. I suspect that the story will only continue to pick up steam when we return from the break in January. 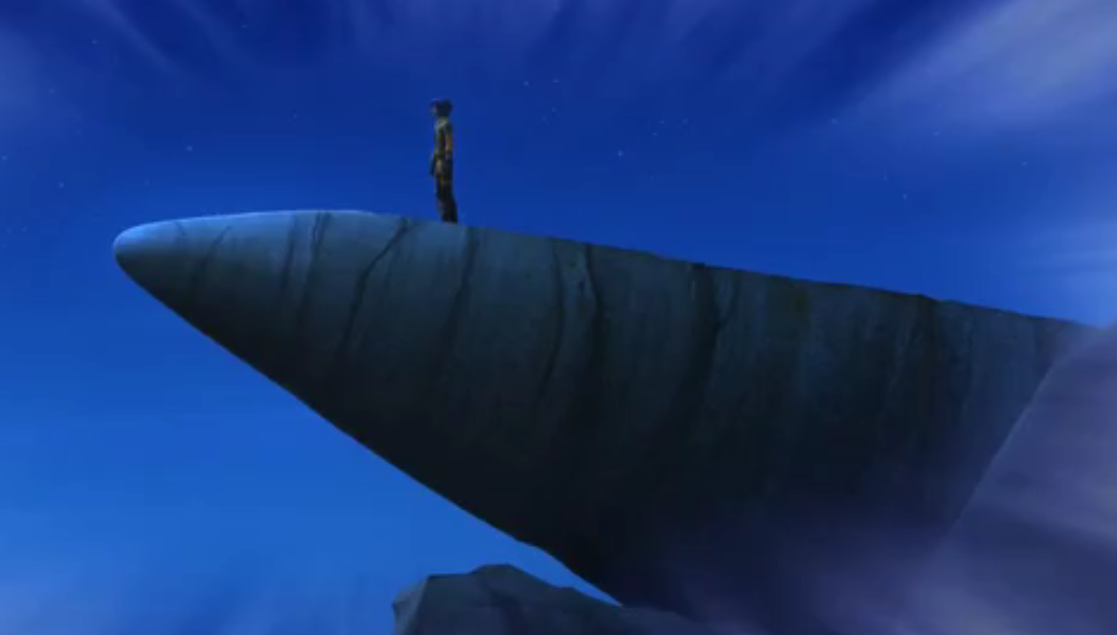 The Bridgers’ fate has been a key part of Ezra’s development and a mystery that’s been dangling since later on in season 1. Still, some shows have a tendency to drag out these plot threads for a bit too long. I liked how the writers handled this one. It felt like the mystery lasted just long enough. To me, it felt inevitable that Ezra’s parents would no longer be for this world. Had they survived, I thought it would stunt Ezra’s growth as a character. 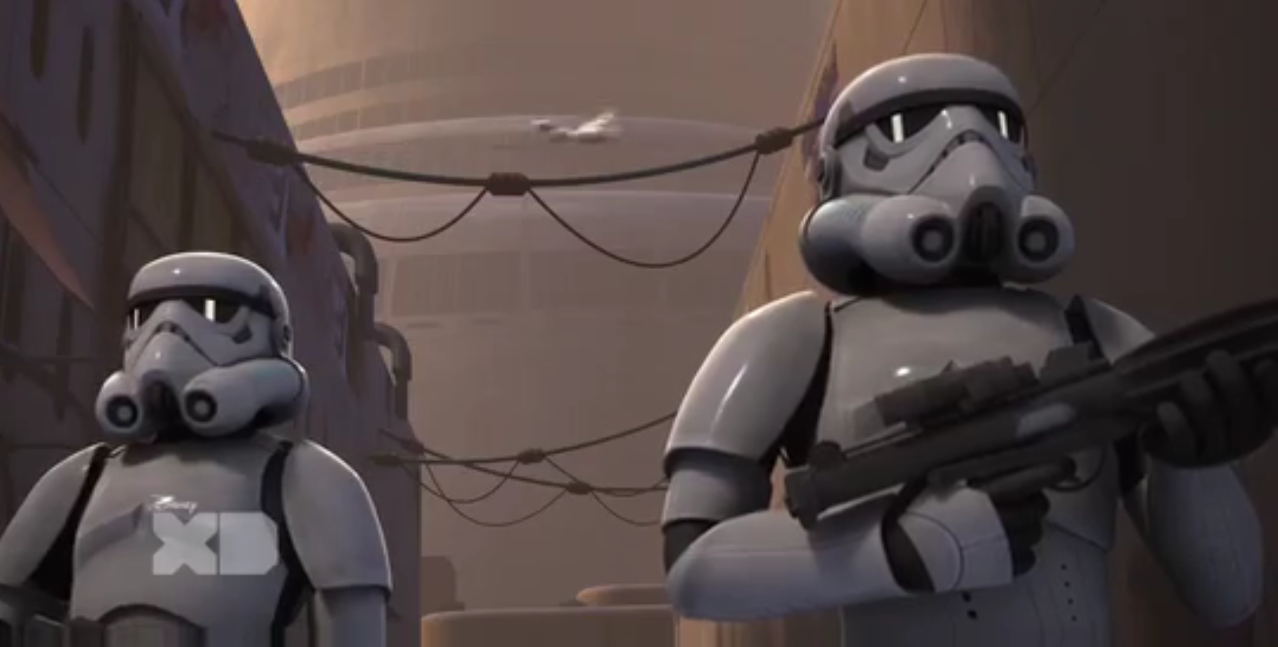 Ezra’s continued growth as a warrior.

Ezra is really starting to become a badass. The moves we saw from this episode just highlight how far he’s come in his training (remember when he struggled to deflect blaster bolts?).

Rebels escape a bit too easy.

It’s hard to quantify exactly why I feel this way, yet it did seem to me that the rebels were able to escape the trap on Garel with a bit too much ease. While Hera’s escape tactics were fun to watch, it did seem a bit fortuitous that the Ghost was able to operate so well after the collision with the Star Destroyer’s tractor beam emitter.

A touch on the weak side for a mid-season finale.

After the incredible lightsaber fight to end last week’s episode, it was bound to be tough to follow that up in as resounding a way. We did get some exciting moments, but last week’s edition felt more like a first half of season closer. Perhaps just a sliver of new info about the Sith Lord hunt would have given this one a little more weight.

While season 2 may have started off a bit slow, I have a feeling the payoffs to come will be worth the wait. When it’s all said and done, I feel that the pacing will feel better when the season can be viewed as a whole. Much like season 1, I suspect that the “filler” episodes may have payoffs that come into clearer focus further down the line.

The animation continues to get better and better. The artwork for Garel was quite impressive and gave us a nice counterpoint to semi-barren Lothal. 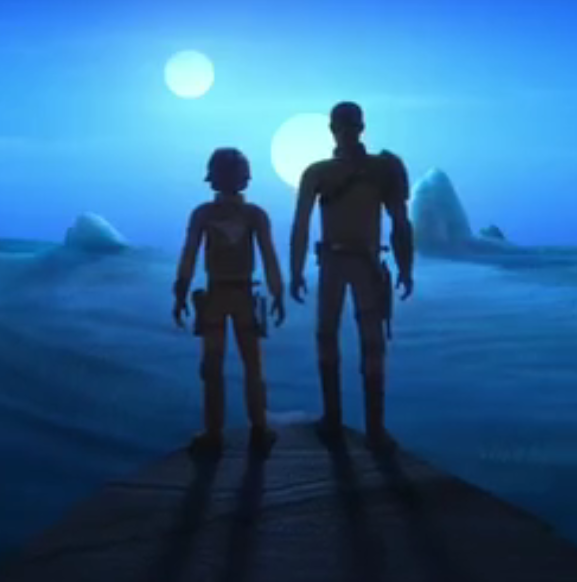 There’s a lot to look forward to and speculate on in the second half. How will the Force-sensitive children situation be handled? Surely, we’ll get more than one duel between Ahsoka and Vader. Filoni teased on Rebels Recon last week that their were more important swordfights to come.  He clearly stated that in the plural. We know there will more backstory revealed, particularly Sabine and the origins of the Inquisitors.

Sometimes, waiting for the big moments make said moments carry even more of a punch. Imagine if we’d gotten the trailer for TFA earlier than we did. Would that moment have been as satisfying? What did you think? What are your general thoughts so far on season 2? What are you looking forward to most when we return in January? How much longer will we have to wait before we get that anticipated swordfight? Do you see Ezra going down a dark path? Sound off in the comments below or at the Cantina. 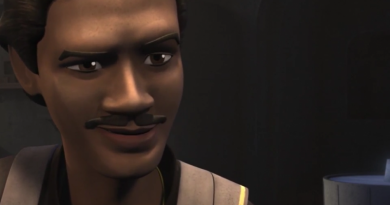 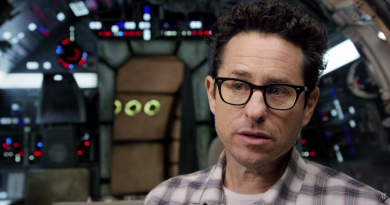