Ever since Felicity Jones was confirmed to star in the first Star Wars anthology film (now known as Rogue One: A Star Wars Story), rumors swirled around the character the Academy Award nominated actress would be portraying in the upcoming film.

Fans have speculated a vast array of characters,  a couple of the most popular being former Jedi padawan Ahsoka Tano of the Clone Wars and Rebels series (below; left), and the young Mandolorian Imperial dropout and rebel Sabine (below; right).  Recent rumors have even gone as far as to speculate that she is none other than the daughter of the notorious bounty hunter Boba Fett.  If we can gain any insight from any of these speculations, it’s that we really don’t know much of anything yet about the upcoming film or the character Jones will be playing in it.  Let’s talk about what we do know so far…

Originally, it was rumored that the film would be a tale about a group of bounty hunters / mercenaries that were involved in stealing the plans for the original Death Star, thus placing the timeline of the film right before A New Hope.  When the title Rogue One was officially announced, this made some doubt the validity of the original plot rumor, dropping the rumor in favor of a movie about the elite Rebel X-Wing squadron known to Star Wars fans as Rogue Squadron.

However, announcements about the film at Stars Wars Celebration in Anaheim confirmed the original rumor that the film will in fact be about a group of resistance fighters (who may or may not be bounty hunters) stealing the Death Star plans for the Rebellion.  The recent cast photo released at D23 (below) confirmed many of the casting rumors we have heard, the gritty tone we were expecting, and the fact that Jones (along with all the others in the photo) is a human character.

So with the cast photo reveal, the Ahsoka rumor is out, and Jones really doesn’t give off much of a Sabine vibe either with her lack of Mandalorian armor and the individual stylistic flare that Sabine is so known for.  Avoiding the ridiculous notion that a 10-yr-old Boba Fett fathered her and the likelihood that she is a brand new character that we have never seen before, who does that leave?  Is there a character in the Star Wars universe, whether it be from Canon or Legends, that makes sense?  I would say “yes” to that question.  I believe the answer has been right under our noses since the release of issue #3 of Marvel’s Star Wars: Darth Vader comic. 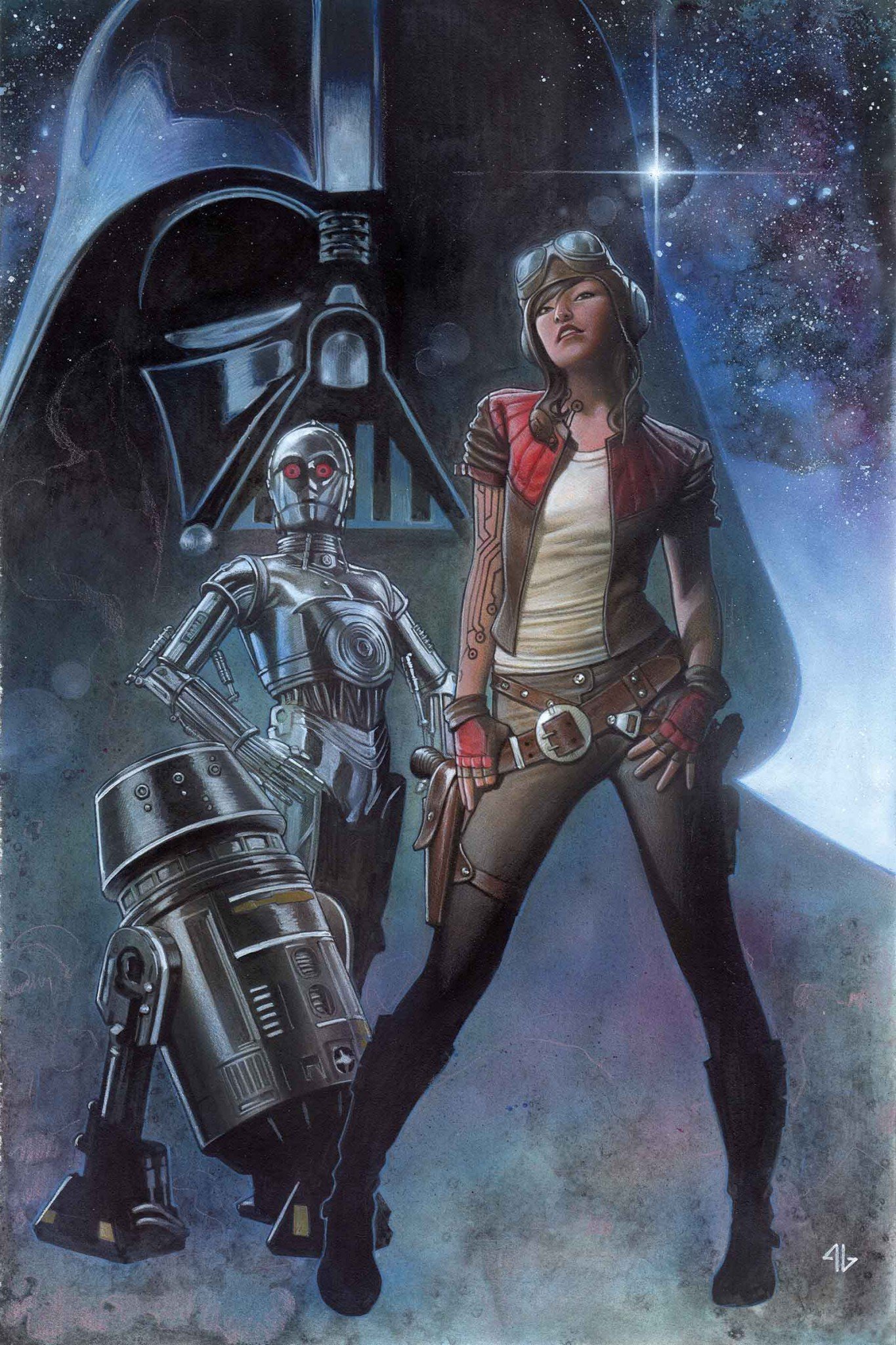 The third issue in the series introduced readers to a brand new character by the name of Dr. Aphra, a twenty-something-yr-old droid programmer and adventurer whose introduction into SW canon was reminiscent of that of Indiana Jones in Raiders of the Lost Ark – ducking and diving through lasers to obtain her prize, accidentally setting off the defense system, and barely escaping with her life as a Clone Wars era destroyer droid barreled after her.  Vader quickly recognizes her talents and hires her to aid him in his efforts to get back his master’s favor after his failure at the Death Star.  Aphra proves to be a valuable asset to Vader, albeit chatty and naïve at times.

She soon reveals that she’s no dummy and is fully aware of how powerful the one who has employed her is, asking him for the mercy of a quick death when she exceeds her usefulness to the dark lord.  That being said, she doesn’t ever come across as being evil either, although she does demonstrate that she’s not afraid to get her hands dirty or to employ the use of bounty hunters (the likes of who she has obviously worked with before) in her task. 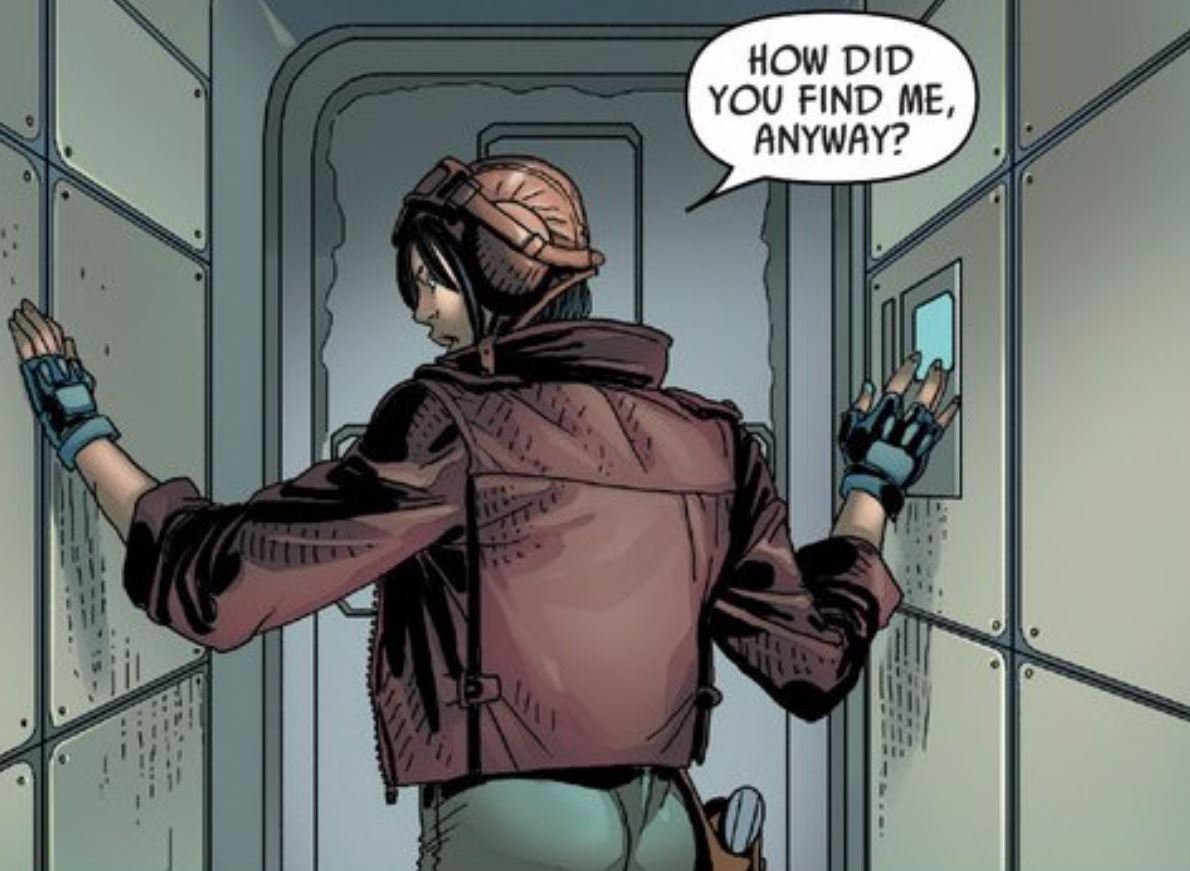 Her skills with technology – especially concerning droids, her connections with the underworld, and her ability to lead a successful Imperial heist (as shown in the most recent issue of the comic series) make her a likely candidate in my opinion to lead a rag tag group of mercenaries on a heist mission for the Alliance prior to her meeting up with Vader.  Aphra loves her work and goes where the money is.  To me, this makes perfect sense. Also, as you can see in the cast photo from D23, Jones’ character shares a similar style to that of Aphra.  She wears her pant waist a little higher here and has a scarf around her neck, but there are a lot of similarites, such as the haircolor, the jacket, the gloves, and the holster on her right hip.

Aside from what we know of her attitude and unique skill set from the comic series, at this point we know next to nothing about her backstory which could easily be explored to a degree in the anthology film.

I still think it’s more likely that Jones will be portraying a character that is all new to the Star Wars universe, but if she is one we have seen before – Aphra gets my vote.