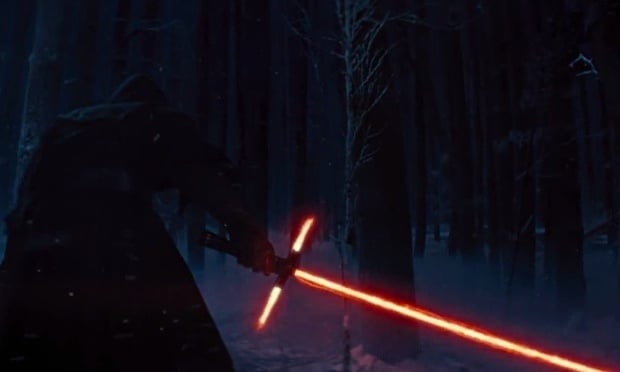 Liam Neeson recently joined the debate about the practicality of “Sithcalibur,” the red lightsaber with the cross guard hilt. Fans around the net have heatedly debated this controversial topic ever since the TFA teaser trailer dropped on “Black Friday.” Now hear what some sword experts think.

A gentleman who goes by the name “Thrand” has produced a few videos dissecting the new lightsaber with the cross guard. After the trailer first dropped he and his partner “Eldgrim” shared their analysis of the practicality of the sword:

The controversy of the sword is derived from the new “cross guard” hilt that fans seem to hate thus far for being “impractical.” This was echoed recently by Qui-Gon Jinn himself, Liam Neeson, when he said:

“I had a couple of worries about that lightsaber. I thought if it comes in [towards the body] and is close to you, it’s like having a jet of [burning] fluid hitting your clothes and your skin, but I’m sure they’ve thought that out.”

Since we live in an electronically interconnected world with information overload, debating fantasy weaponry has become fair game. In that light, Thrand has released another video along the same lines as Stephen Colbert wherein the cross guard hilt is easily explained. However, Thrand takes his analysis a bit further in his next video as he demonstrates its practicality:

Whether you love or hate Sithcalibur it’s fun to see the depth of enthusiasm fans have for discussing Star Wars and the lengths they’ll go to prove a point.