The first possible description of TFA teaser trailer was posted by BadAssDigest. With TFA teaser just around the corner, it was just a matter of time before such thing would appear. At this point no one can tell if it’s legit, and I even wouldn’t call it spoilerific so feel safe to continue reading…

It’ll be short. And when I say short, I mean one minute long. It’s going to have The Force Theme played on woodwinds, softly, over flashing images of the main leads, each fading to black. There’s no dialogue, just reveals of the characters. And then the music swells up into a full orchestral piece – perhaps what John Williams recorded this weekend? – and we hear a female voice, likely Daisy Ridley’s, saying “Wake up.”

And then the title card appears – Star Wars: The Force Awakens – and we see the Millennium Falcon, firing blasters, coming right at the camera.

Remember that the rumors state we could be seeing a trailer as soon as the release of The Hunger Games: Mockingjay Part One or Thanksgiving, and at the latest it will be shown around Christmas. This is a very exciting time to be a Star Wars fan.

The fine folks over at Making Star Wars have stated that they have received a tip from an informant that the trailer will have a little more content than a few new faces.

It should be noted that the list is by no means in order. Still, it’s cool to hear that some of the rumors that have circulated might have some weight to them after all.

Once again, special thanks are in order to Cantina regular MagnarTheGreat for pointing these two tips out for us.

Latino Review also shared what they know on the subject:

People in Europe have also been secretly shown the minute-long Star Wars: The Force Awakens teaser.

I’m very happy to tell you that our new villain, the “cyborg” or “Inquisitor” depending on when you jumped off the rumor mill, is totally in the teaser.

He’s masked (no identity spoilers yet!) and the final design of the mask looks somewhere in between the red-colored Imperial Guards from Return of the Jedi and Darth Revan from Knights of the Old Republic.

Some of the descriptions above definitely match with THIS leaked concept art. This villain resembles another character from the Star Wars: Legacy comic which we discussed before HERE and HERE. There’s been too many coincidences with this comic already. Don’t you think? I hope the teaser will give us some answers. 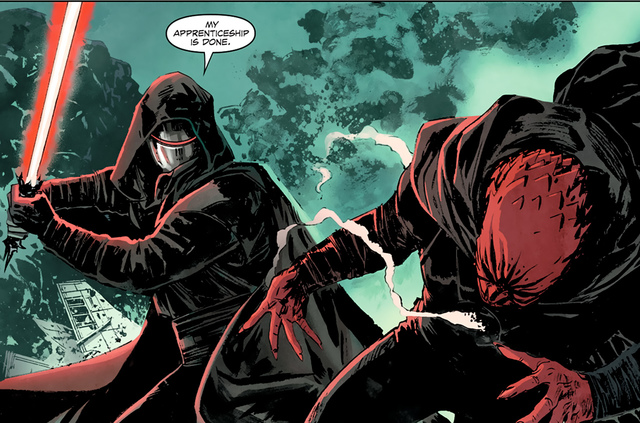