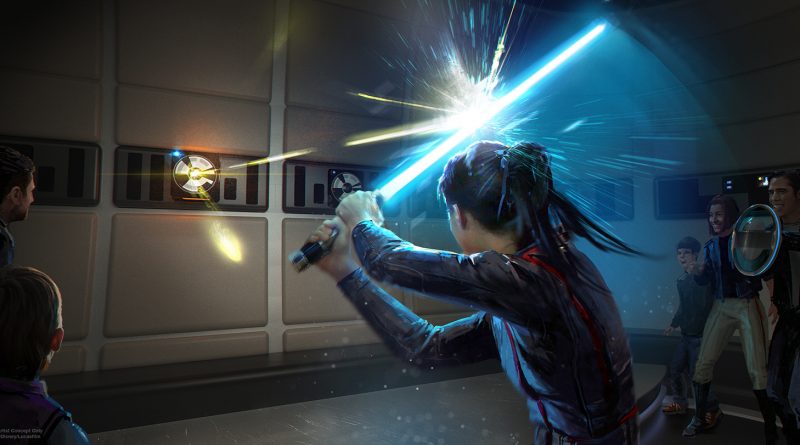 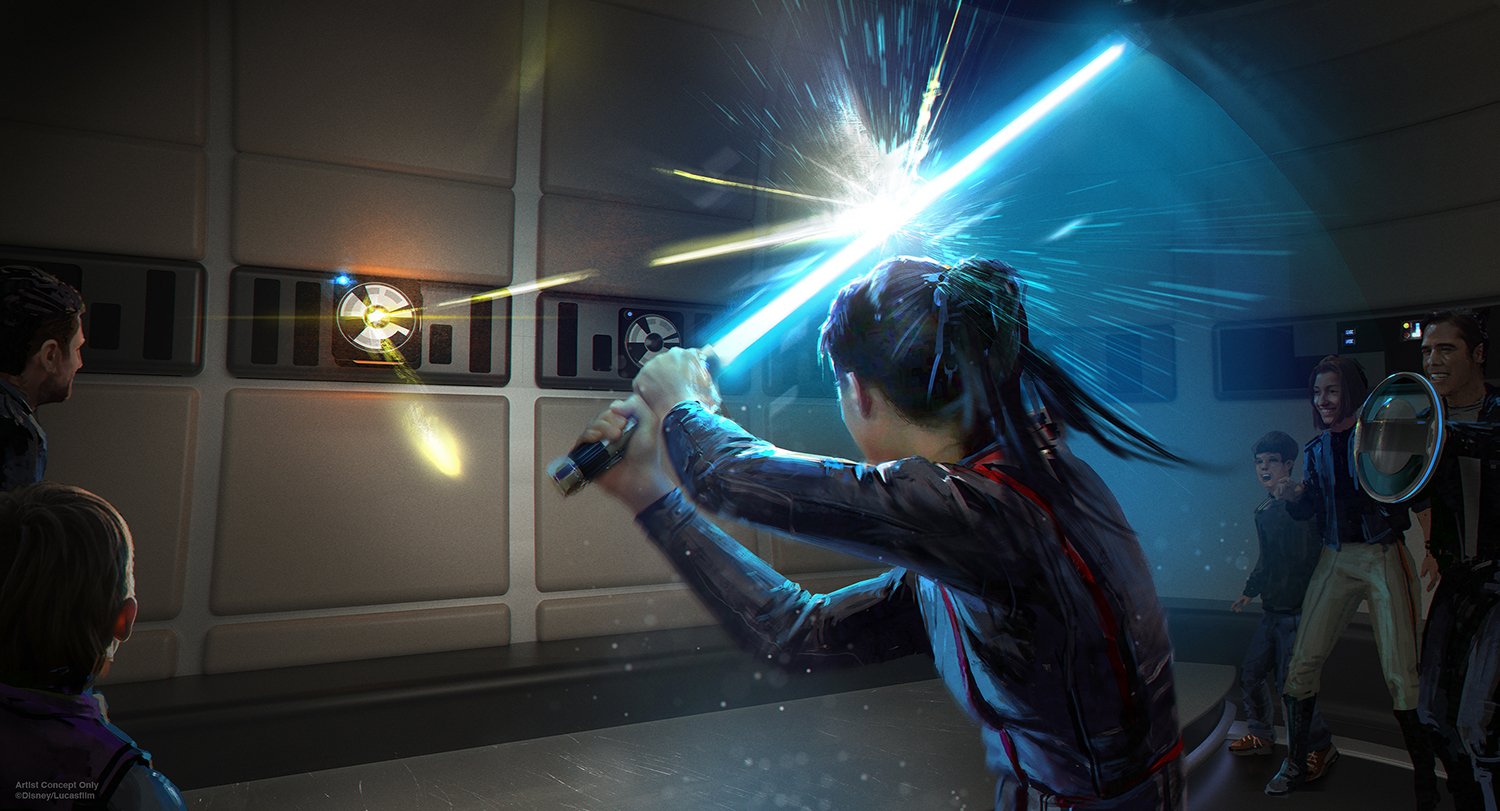 To quote my mom while I was growing up: “Look with your eyes and not with your hands.” — this seems to be the case when it comes to the ‘real’ lightsabers developed by Disney Imagineering for use on the new Star Wars: Galactic Starcruiser hotel experience set to open in Florida at the Walt Disney Resort in March of 2022. 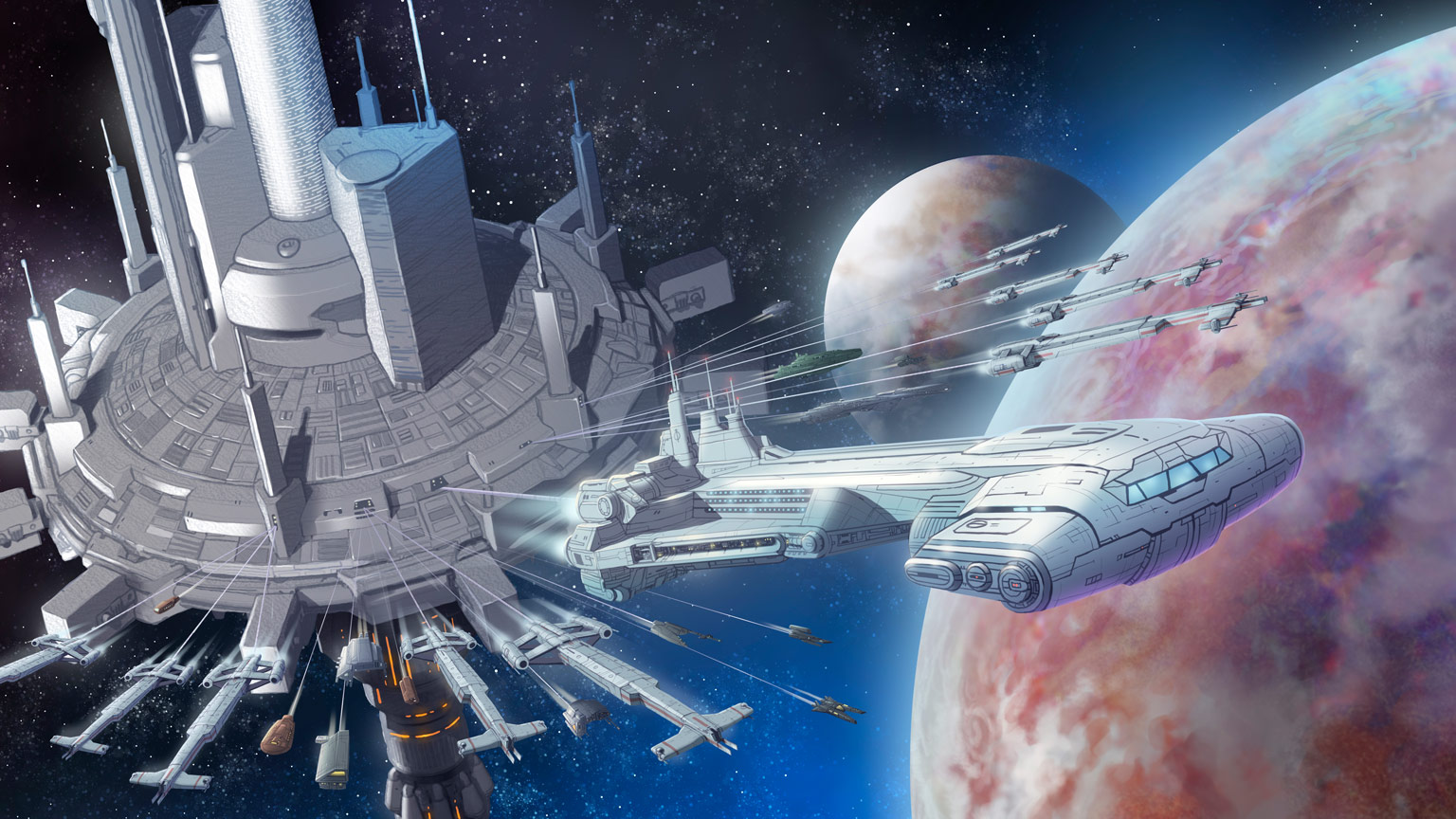 In addition to learning that the Halcyon, the star cruiser guests will be staying aboard during their two-night stay is to be featured in High Republic stories set to come out next year, and that the hotel itself is booked through June of 2022, it has also been revealed that the ‘real’ lightsabers will only be used by performers and not by Guests.

Disney has recently been play-testing the Hotel experiences, inviting a select few to try their hand at the interactive narrative and role-playing scenarios as well as the food and drink one can expect to indulge in aboard the premier space-hotel. Part of this experience involves Guests getting their hands on a lightsaber and wielding it to deflect blaster bolts in a training simulation. 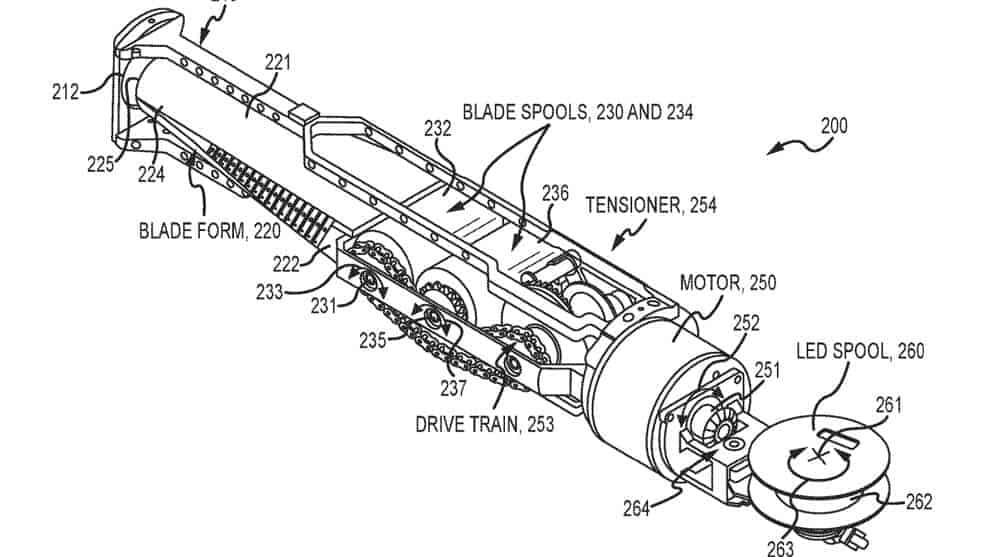 Joshua Yehl from IGN had this to say of the experience:

“Unfortunately, that lightsaber isn’t for guests to use or purchase. It’s strictly for use by the performers. I didn’t get to see the new lightsaber on my visit, so I have no details to share about it, but given how Kylo Ren and Rey are frequent sights at Galaxy’s Edge, I wouldn’t be surprised if they showed up on the Galactic Starcruiser at some point, fancy new laser swords in hand.”

He went on to emphasize that there will still be plenty of opportunities for Guests to part ways with their money though:

“That said, the Galactic Starcruiser does have a boutique that sells all manner of merchandise, and a Disney rep said it’s likely some type of lightsaber will be available for sale there.” 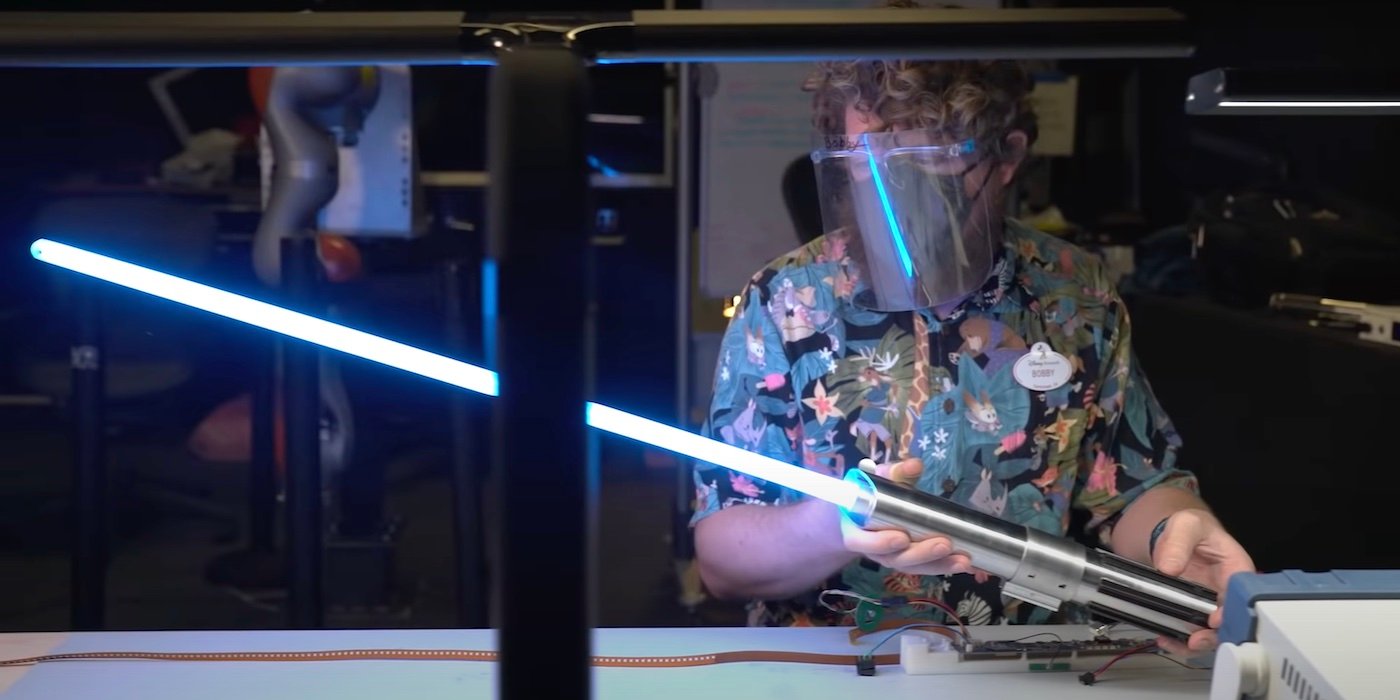 This revelation was further confirmed by GameSpot’s Chris Hayner when discussing the guided visit with creative executive and Imagineer Scott Trowbridge:

“Trowbridge confirmed in a group interview that guests will never actually use that lightsaber, but that it will be part of the Galactic Starcruiser experience. If we had to guess, there will be a moment in the story where Rey is involved–given that it’s her saber–and will wield it to ward off the First Order.”

Hayner confirmed what the Guest experience with the laser swords will look like:

“Instead, you will be given what feels like a high-end, yet slimmed-down lightsaber replica with a fixed blade. You power it up and all of the sounds and vibrations you would expect are there, but if you walk in expecting to get to play with the new one Disney has developed, let this serve as a warning.” 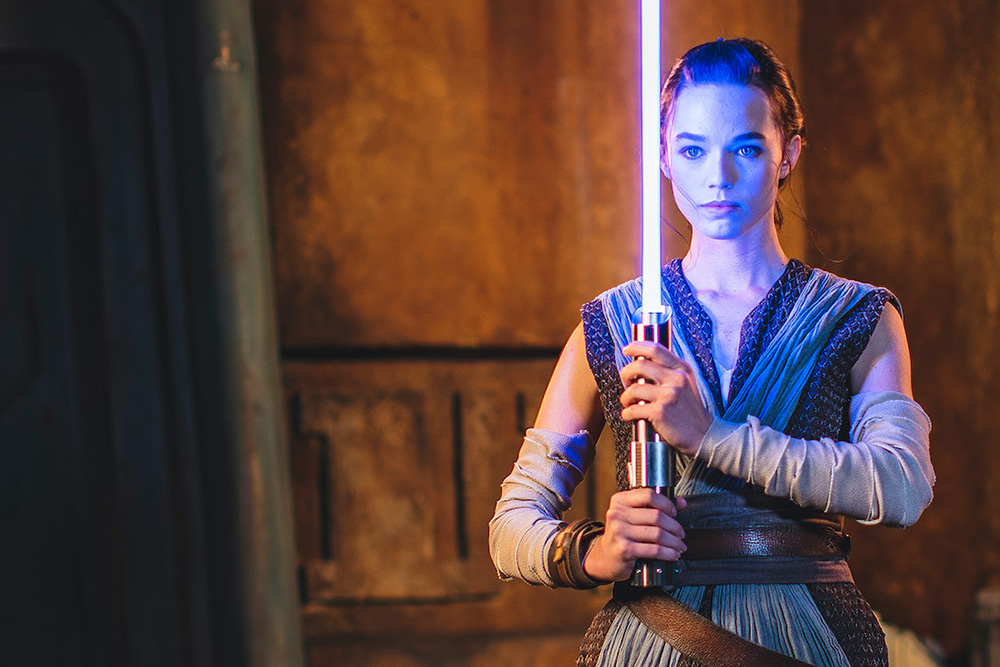 While this news will undoubtedly come as a disappointment to those looking to get their hands on a lightsaber minus the fixed blade, this also does not come as a surprise, as it is very common for Disney to develop exclusive technologies to be used only in-Park and only for performance purposes. 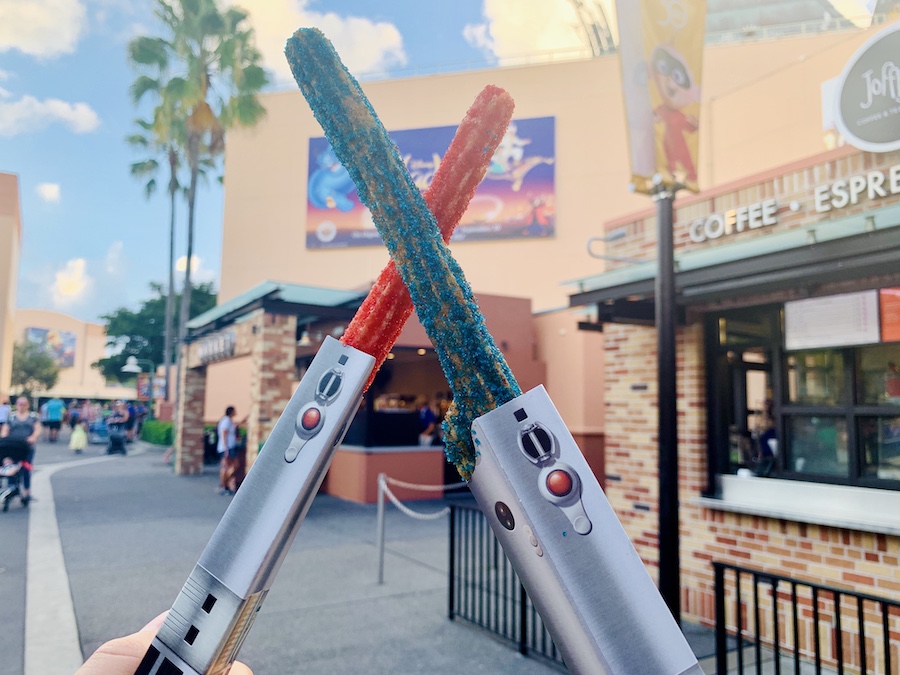 If anyone is in need of some comfort after hearing this news, you can never go wrong with a lightsaber churro. While they may not extend automatically, you can certainly make them retract, one yummy bite at a time. 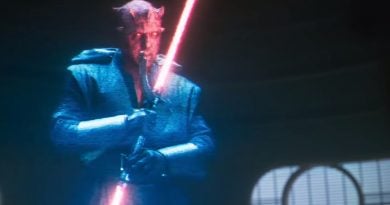 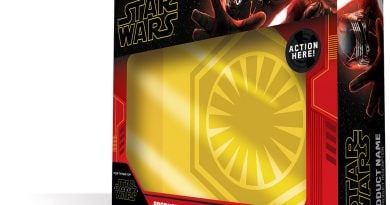 2021 Star Wars NFL Pick 'Em VIII
WK 13 (Slightly late.... )GREEDOS ZABRAKS VADERS SITH EWOKS BANTHAS
By: DarthSnow
2 hours 5 minutes ago
Michael Jackson
Great thread topic. I grew up on MJ. When thriller came out, I was in middle school in Anchorage Alaska....
By: Lord Phanatic
5 hours 35 seconds ago
Michael Jackson
I mainly love Hard rock, rock, metal, etc, but also like all kinds of music. I like a lot songs...
By: Bluemilk
7 hours 31 minutes 57 seconds ago
The 'whats left of 2021' Box Office Challenge
I couldn't hardly find anything about Wolf. Even the box office results don't really mention it. My guess was just...
By: Bluemilk
7 hours 42 minutes 24 seconds ago
The One Thing You Didn't Like in TLJ (For TLJ Lovers)
I'm not a TLJ lover or a hater. I won't sit here and run down the list of everything I...
By: Lord Phanatic
12 hours 3 minutes 52 seconds ago
What Show are you currently watching?
Yes I'm late to the party as well. Ridley Scott's name being attached definitely helped to draw me in. Did...
By: Lord Phanatic
14 hours 1 minutes 9 seconds ago
Last Movie You Watched
By: Mando LXXXV
17 hours 31 minutes 12 seconds ago
What Show are you currently watching?
Just started Raised by wolves... talk about late to the party its RIDLEY SCOTT by god... haha. Thinking about watching...
By: Rogues1138
18 hours 17 minutes 42 seconds ago
User Birthday Thread.
!
By: Pomojema
19 hours 2 minutes 3 seconds ago
Star Wars: The Essential Legends Collection - Fourth Wave of Books Includes Death Troopers and More
to check out and comment on this topic on our main site
By: SWNN Probe
20 hours 33 minutes 13 seconds ago
Michael Jackson
By: Messi
21 hours 16 minutes 58 seconds ago
Brandon Sanderson Books (Non-Stormlight)
By: Use the Falchion
22 hours 20 minutes 10 seconds ago
Music Recommendations/What are you listening to?
By: Use the Falchion
23 hours 32 minutes 19 seconds ago
Hawkeye (2021)
more critical mentor (so far). The Clint/Kate dynamic is far more father/daughter from the start, though, because we know Clint...
By: Use the Falchion
1 days 48 minutes 24 seconds ago
Seemingly forgotten ST Characters you’d like to see more of
Great thread! I agree with you regarding Maz Kanata - there's so many possibilities for where she could appear....
By: Logray Ewok Medicine Man
1 days 1 hours 1 minutes 37 seconds ago