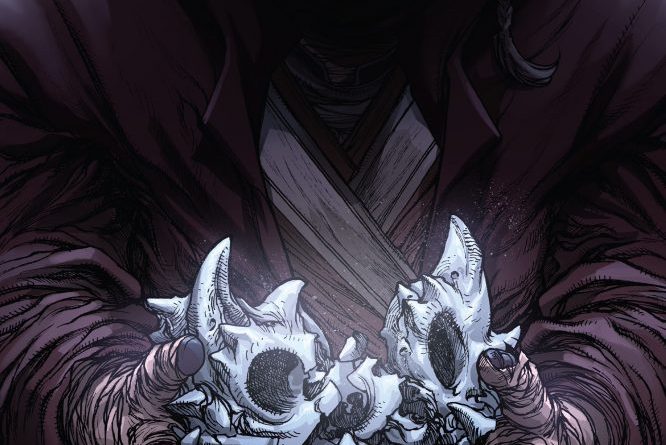 The Battle of Takodana rages on in this week’s 10th issue of IDW’s The High Republic Adventures. The Nihil have bombed the Jedi Temple, leaving our group of Padawans in peril. Meanwhile, Qort deals with being back on the planet he used to call home as a greater destiny calls to him. The Padawan is wrestling with the meaning behind the skull helmet he found as a child. The very helmet key to determining what path the young Jedi will walk along.

Jedi Master Sav Malagán is teaching Qort when Maz Kanata interrupts with news of Yoda coming to Takodana. It’s time for Qort to leave and further his training to become a Jedi. Before going, Sav convinces Yoda to let Qort keep his skull helmet knowing what it means to the youngling. She then gives him one more lesson regarding when the time comes to lose the helmet.

It’s very simple but it still hits home. The skull helmet is important to Qort because it helps him control the inherent aggression Aloxians have as children. Eventually there will come a point when the helmet no longer fits and shatters, most of the time due to the natural growing of the head as one ages. That is when an Aloxian truly becomes themselves. Now as Qort ventures off with Yoda, he must also come to terms with himself as he grows up. 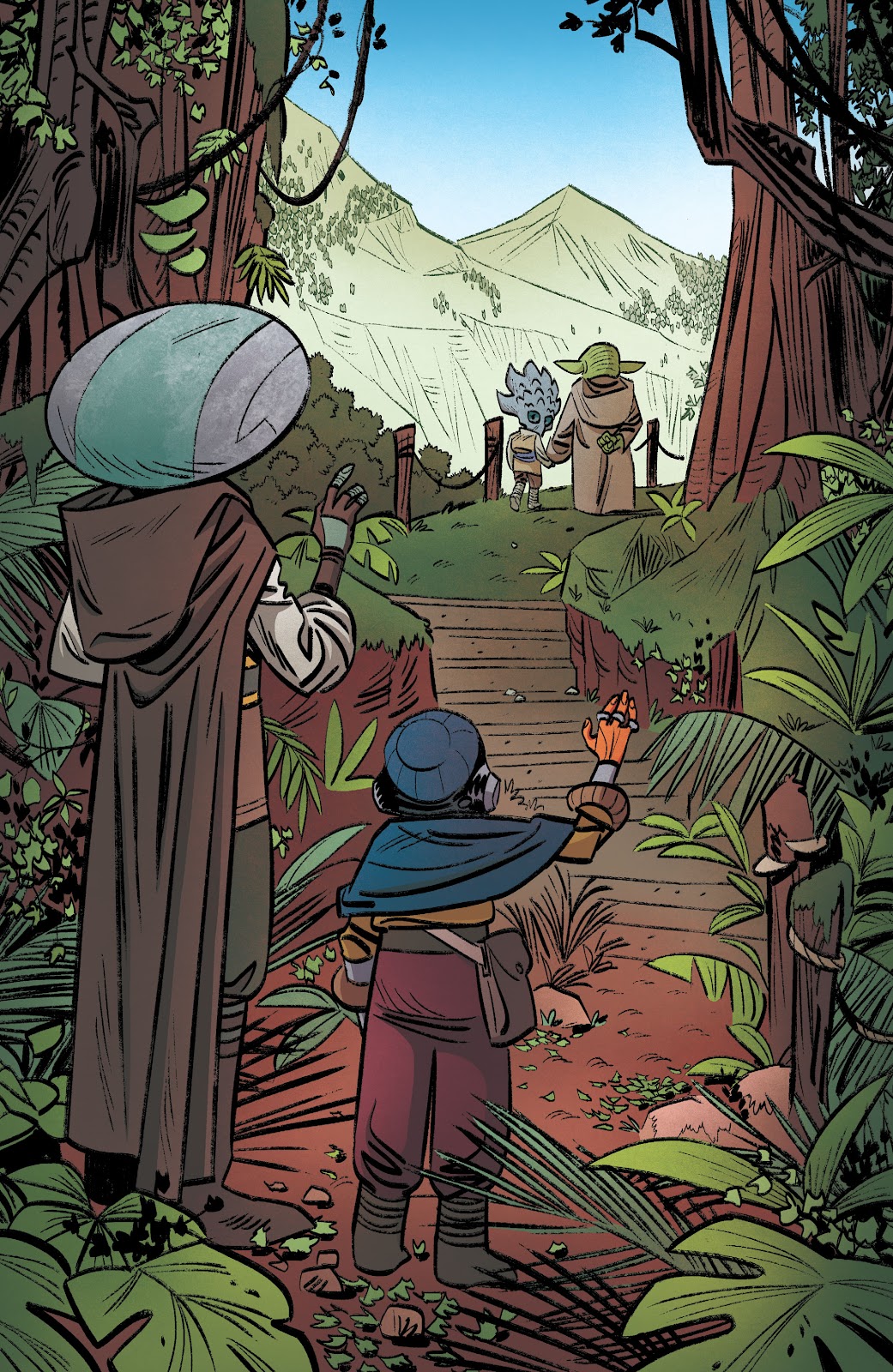 Flash forward to the present, the Temple is in ruins. In the rubble sits Qort, his helmet completely shattered. He tries piecing it back together and even holds a couple pieces up to his face. To me, that’s a wonderful visual touch. His helmet never got the chance to break naturally. He’s not ready. Qort is going to have to make a choice, and he’s going to have to make it fast as the Nihil come back around to strike again. 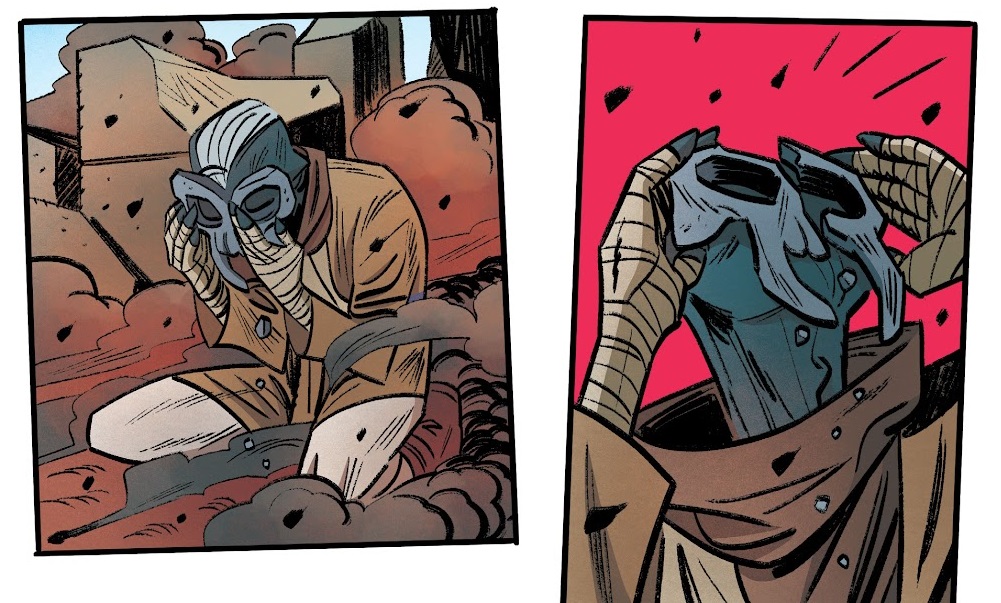 A Nihil ship lands in front of him and Sav. It was a little jarring to see a Jedi Master cower and seemingly accept her fate like Sav did here, but maybe it was because she knew what was coming next. Qort recalls what his former teacher told him as a child in a wonderfully simple spread. Qort calls his lightsaber, tells himself he is ready and from there, it’s all over for the Nihil attacking Takodana. 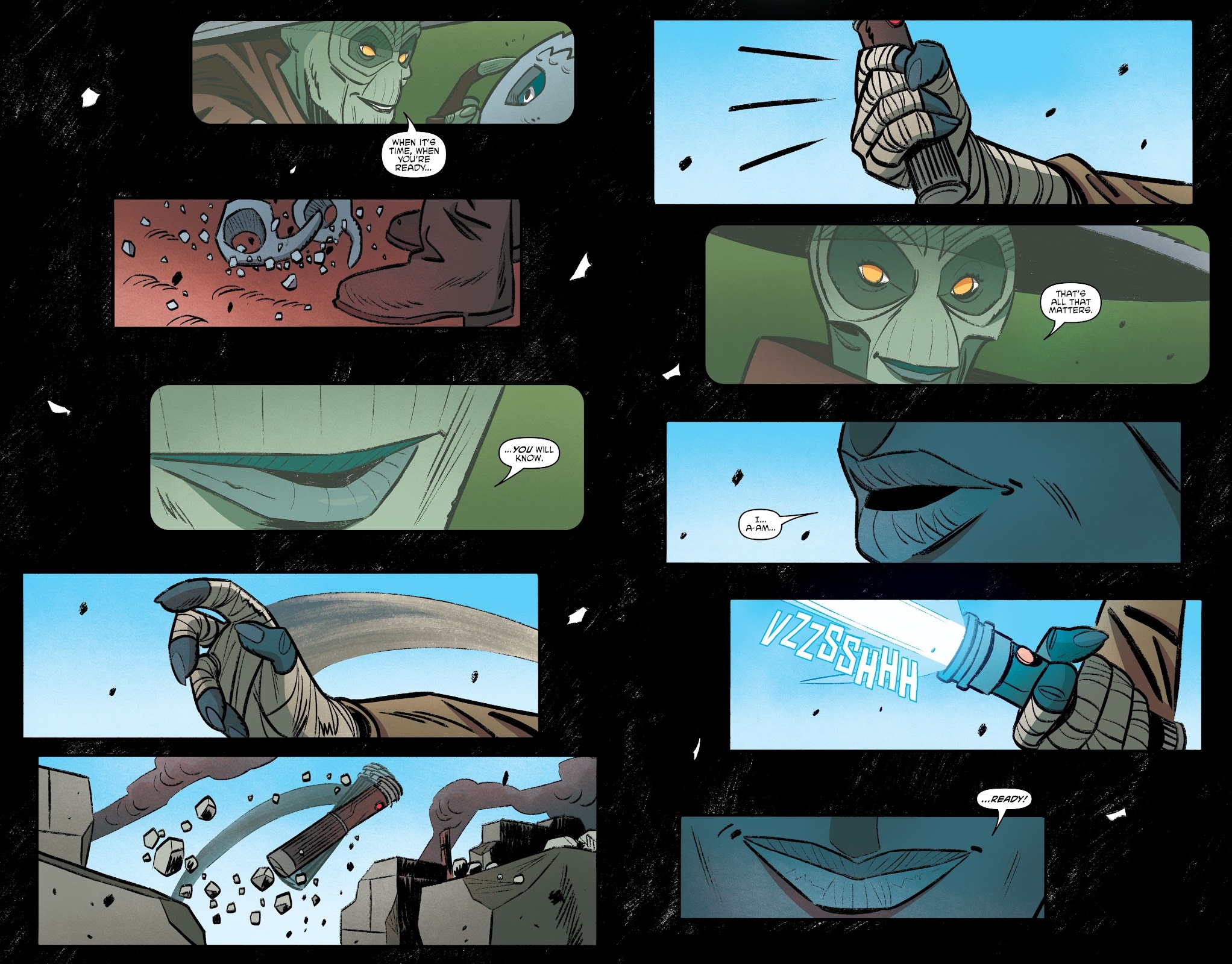 In the last issue, we saw how hard it was for two Force-sensitive beings to control a rabid baby Qort. Now trained in the Force, Qort channels his inner Aloxian and easily takes over the Nihil ship and attacks another. All this seemingly without ever opening his eyes, implying he is fully sinking himself into the Force and letting it guide his actions. 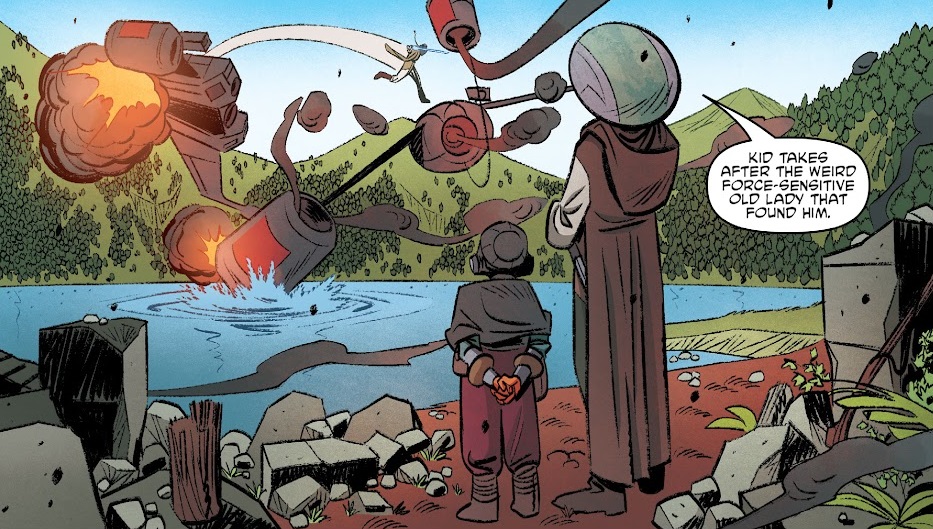 Meanwhile, watching from afar are Sav and Maz who have a fun little back and forth. The Nihil soon retreat. Maz then calls for reinforcements to save what’s left of the Jedi Temple and provide medical aid. While the duo work to restore Takodana, the focus shifts back to the real matter at hand.

Qort returns to the group and we get our first glance at his eyes as he opens them for the first time. They tell a story about a young man now living for himself after living his life hiding behind a mask. He sees his friends and that’s when he fully realizes what just happened. After a moment of hesitation, he and the gang share an embrace.

Elsewhere, we find Krix being approached by Sabata, the one who bombed the Temple setting this issue’s events into motion. It is revealed that Bareen, Sabata’s sister, was actually defecting from the Nihil in the last issue. Sabata only pretended to defect so she could sabotage the Temple. Krix accepts this and informs her of a new plan the Eye is hatching upon the Republic and the Jedi. Marchion Ro’s schemes will soon come into full focus. 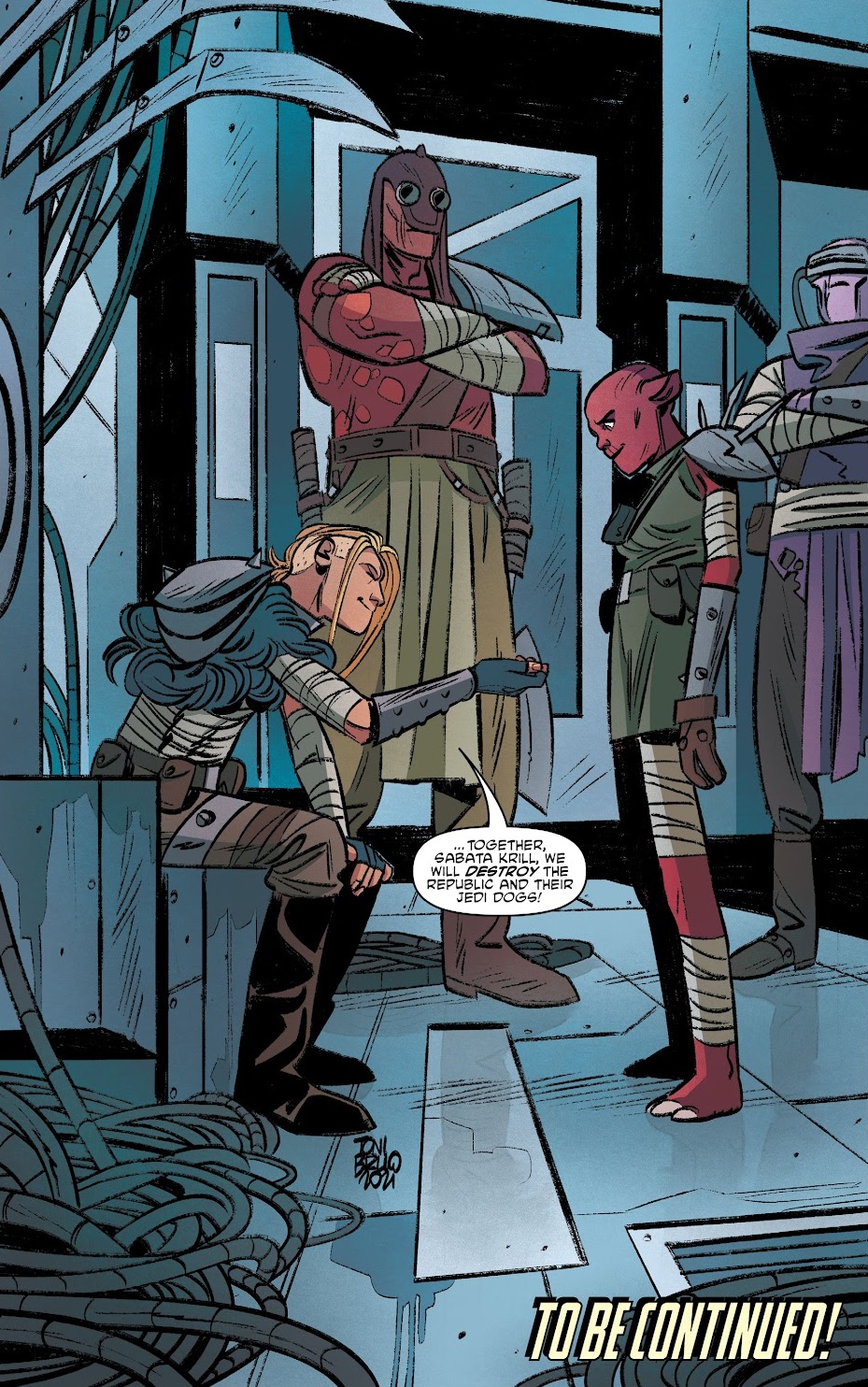 Overall, I found this to be a fine conclusion to this part of the story. Qort was the center of this arc and seeing him in full Jedi mode was rewarding. Accepting who you are and becoming the hero of your own story to save others is what Star Wars is all about. Writer Daniel José Older and artist Toni Bruno knocked it out of the park with the smaller, subtle moments in this issue.  The big action set piece was tough to follow however. That did result in some pacing issues throughout and the dampening of my enjoyment of Qort going wild on the Nihil, but nonetheless.

Qort has instantly become one of my favorites in this series and it will be fascinating to see where he goes from here. I think it is safe to say based on what we’ve seen in this series to date, that Qort is being positioned as the most powerful of the core Padawans from a combat perspective.

On the larger scale side of things, I am a little disappointed there was nothing for the other Padawans to do, especially Zeen. It feels like a giant missed opportunity to do nothing seeing as her former best friend Krix was on the other side of the conflict. A huge deal was even made about this before the mission whether or not Zeen should even go to Takodana. I’m sure Older is saving this plot thread for the next arc as we enter the final wave of stories in this phase of the High Republic. But for now, it’s a slight downer that the climax of this fight wasn’t a little more high stakes. These characters have earned it. 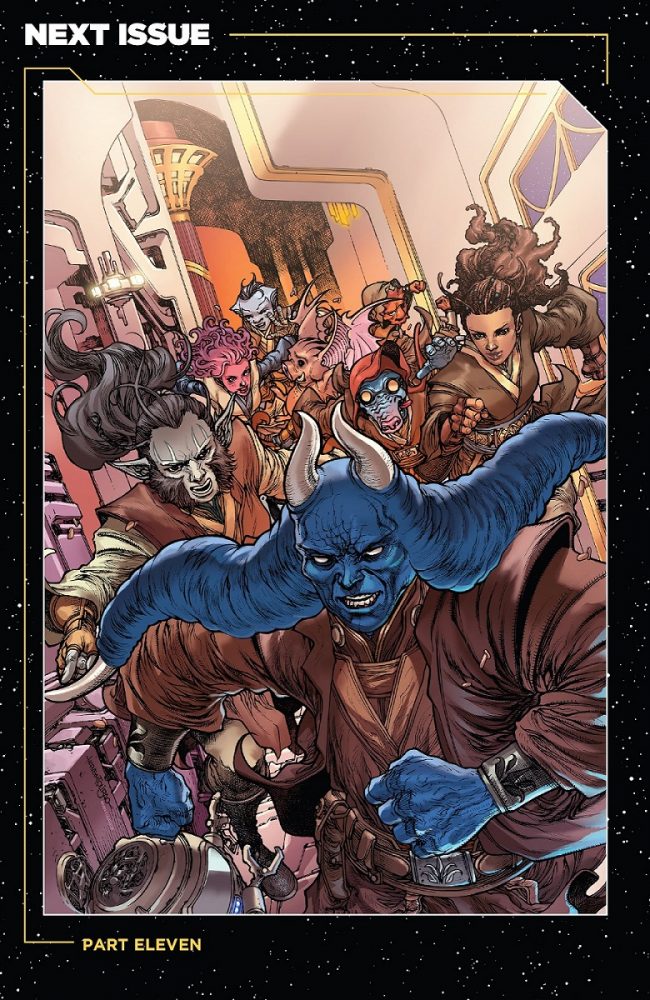 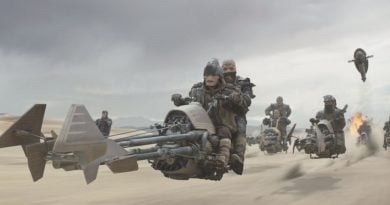