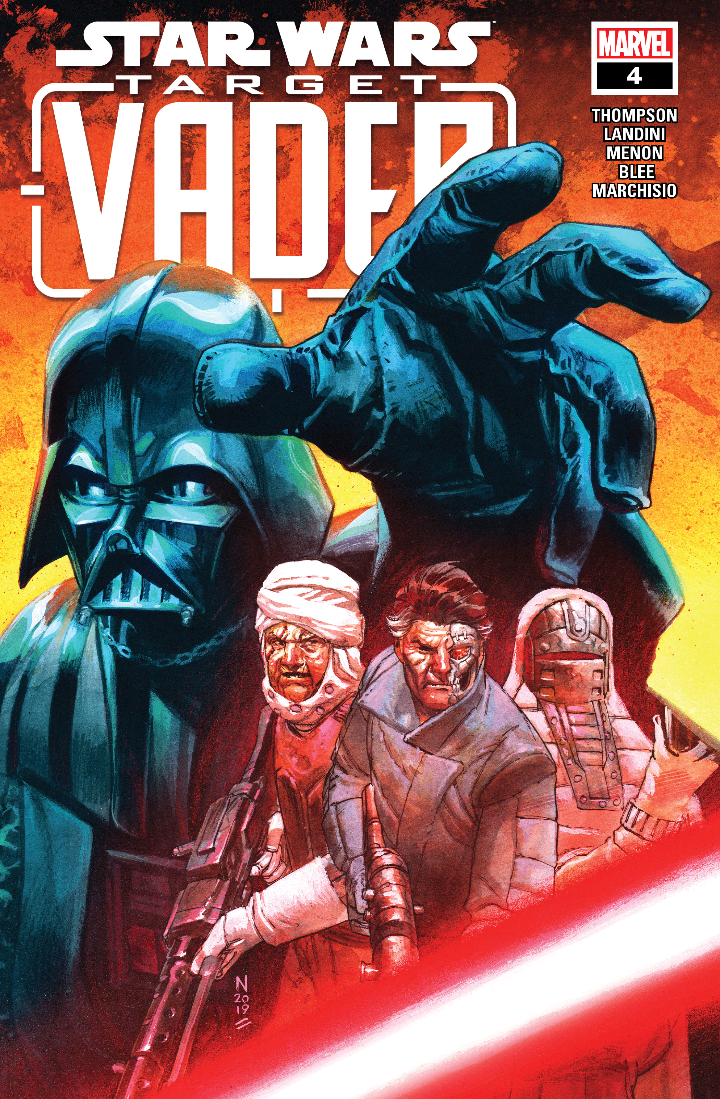 Want to hear a joke? (Spoilers ahead…)

A girl, a cyborg, a pig-lady, a four-armed monkey, and an Australian mummy walk into a bar. They all hide, hoping to catch the evil dark knight by surprise. But the knight obviously doesn’t like surprise parties, and he lets them know it very quickly. Before they can even say “happy birthday”, he hacks them all to pieces.

Okay, that’s not really a joke, but that’s pretty much how Star Wars: Target Vader #4 plays out, minus any actual bar of course. That being said, this issue is no joke. It may not be some sprawling epic, but it’s a lot of fun, and in the end, isn’t that what we should expect from comics? Read on for the full review. 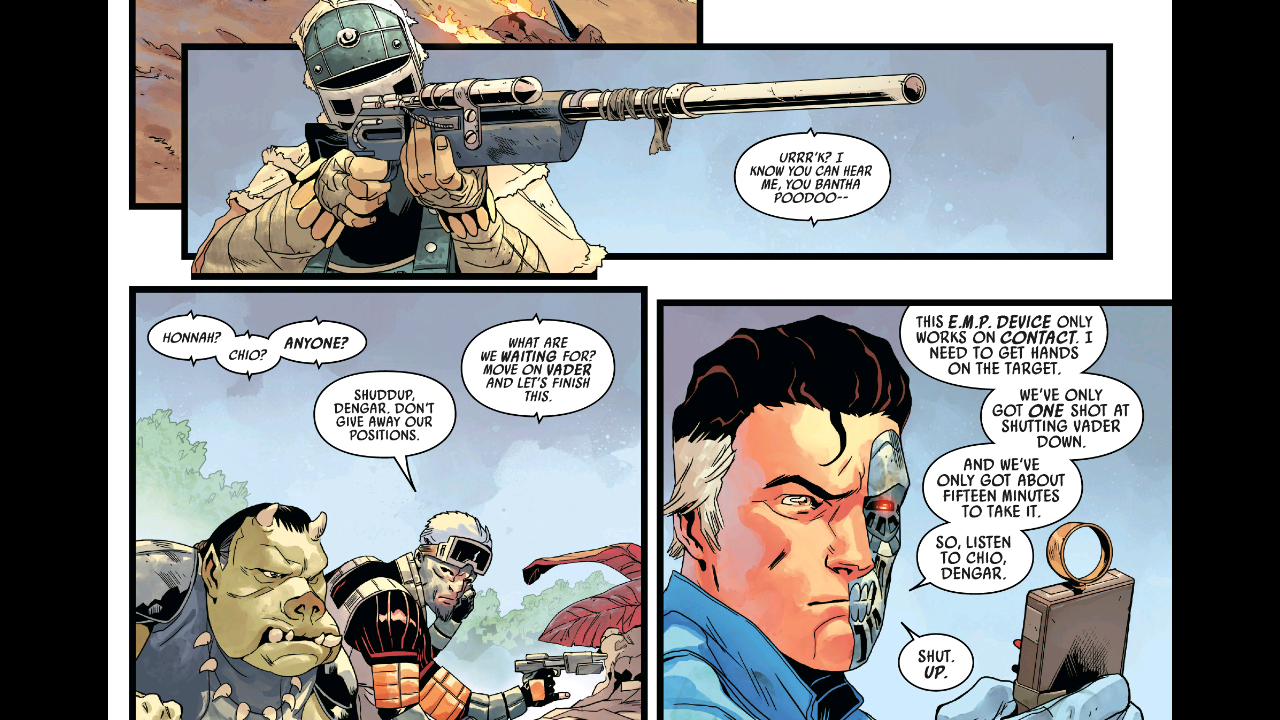 The cyborg, Beilert Valance, is the leader of our group of bounty hunters that includes Dengar (our Australian mummy), Chio the Ardennian (four-armed monkey), Honnah the Gamorrean (pig-lady), and a Tusken sniper named Urrr’k (who actually just turns out to be a human girl named Gita in disguise). The group was hired by the Hidden Hand, a clandestine organization that has connections to the Rebellion against the Empire, to bring down the Emperor’s right hand machine man, Darth Vader. 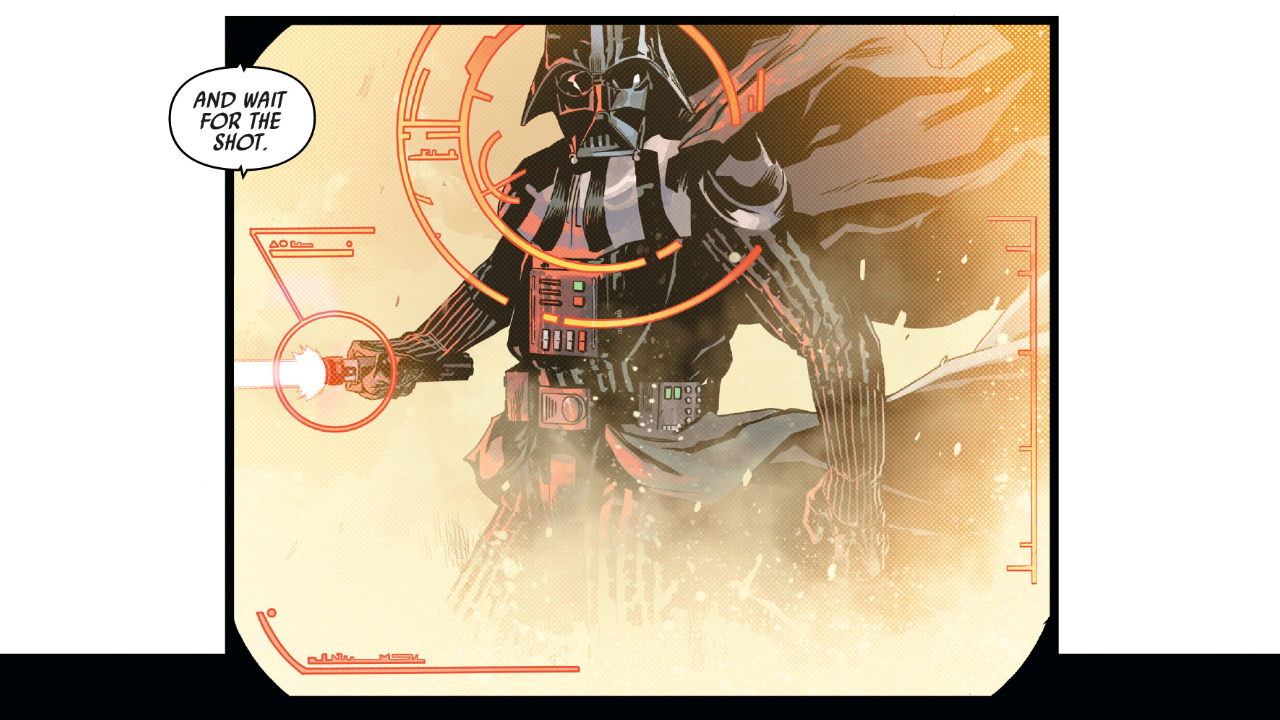 For three issues, we have followed the bounty hunters in their cat and mouse game with the Sith lord, and in issue #4, everything finally comes to a head. Vader walks right into their trap, but Valance knows they only have one shot for their plan to work. With Vader cut off from Imperial reinforcements, the crew has a fifteen minute window before the might of the Empire arrives, and they need to distract the dark lord so that Valance can hit him with an EMP device to take his suit out of commission (and presumably him along with it). 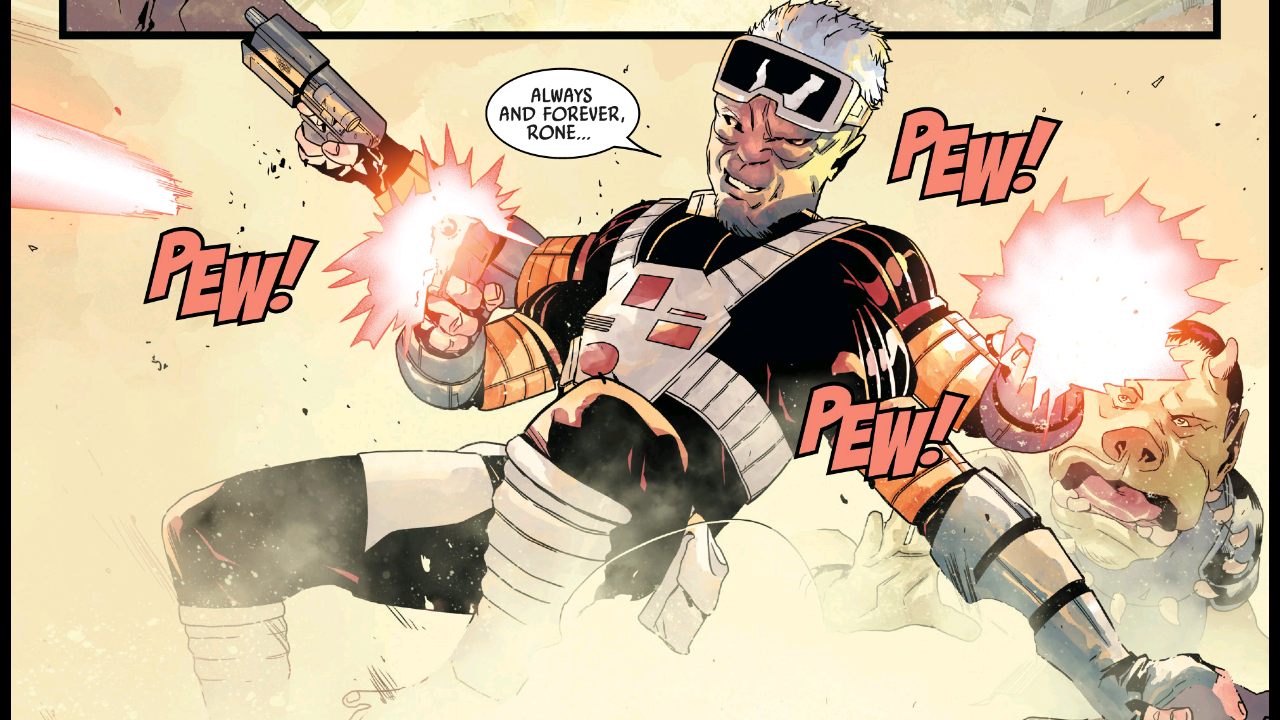 But as we know, Vader is not one to go down without a fight, and he didn’t walk into their trap unknowingly. Using the Force to stir up the dust around him for cover, the tables begin to turn in the Sith lord’s favor. This unexpected shift leads a couple of the bounty hunters to go off script and attack Vader prematurely. Both Chio and Honnah have a bone to pick with the Empire in general for its responsibility in the deaths of their significant others, and so they’re not just going to wait and see how all of this goes down. Chio attacks first and is quickly disarmed (literally) by Vader. Honnah brings her Gamorrean battle axe into the fight, but Vader is simply no match for either of them, even together. 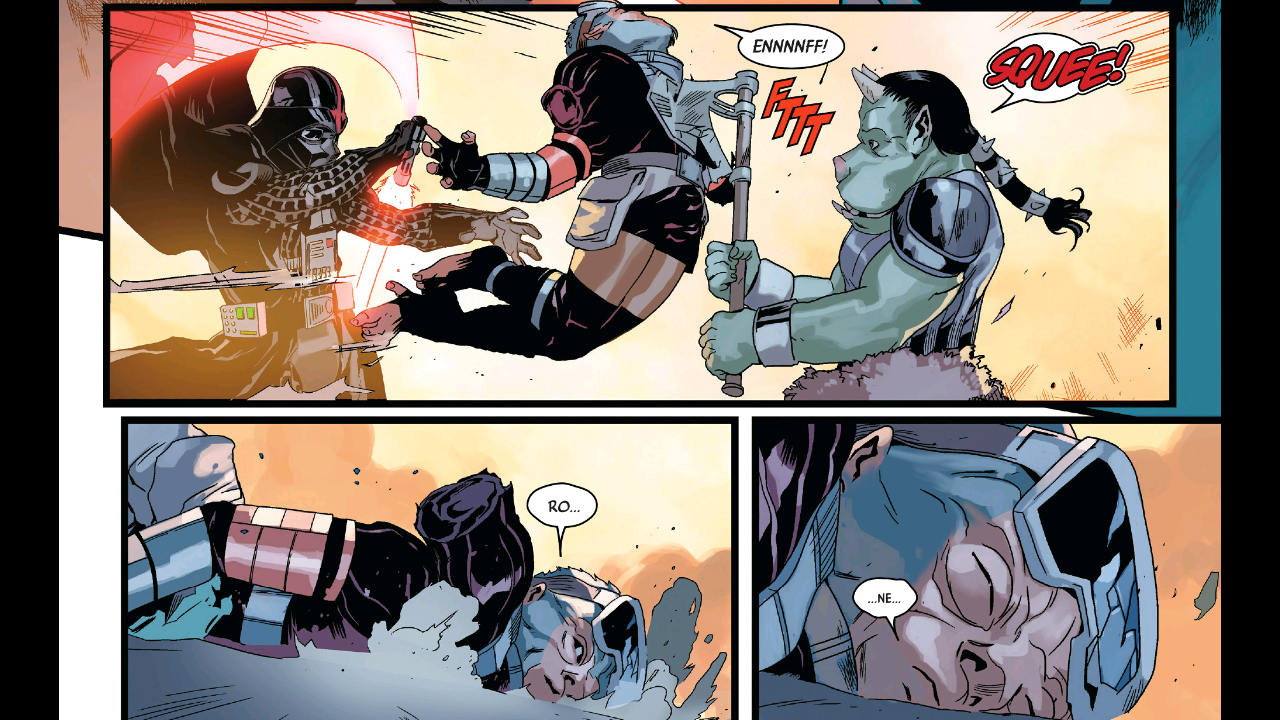 Slinging Chio onto Honnah’s axe, Vader kills the Ardennian. Soon after, he cleaves Honnah with his lightsaber. Calling an audible of his own, Valance then tries to go ahead and make his move against Vader as Gita peppers the Sith lord with shots from her sniper rifle. Gita is no amateur and the shots are dangerously close to their mark, but once Vader hones in on her position, she’s taken out of the fight (though she may actually still be alive). Seizing this last opportunity, Valance rushes up behind Vader, but it’s at this critical moment that the tables take a more fatal turn for the cyborg and his crew. 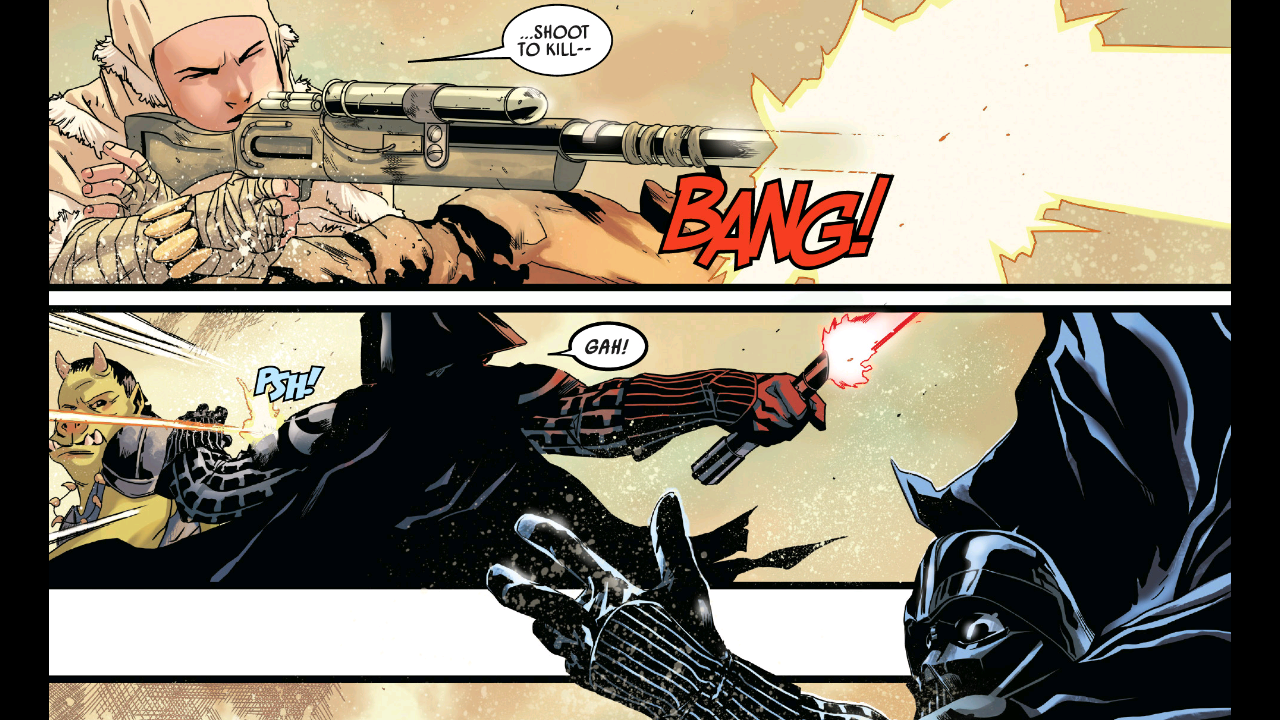 Readers of the series have known for a little while now that one of the bounty hunters on Valance’s crew was a traitor to their mission, feeding intel about their plan and their location to the Empire. With the pieces in place, the traitor finally makes himself known to Valance. Given Dengar’s appearance in The Empire Strikes Back as one of the bounty hunters Vader mobilizes to track down the Millennium Falcon, I suspected from the start that Dengar might be the one, and as it turns out, I was absolutely right. 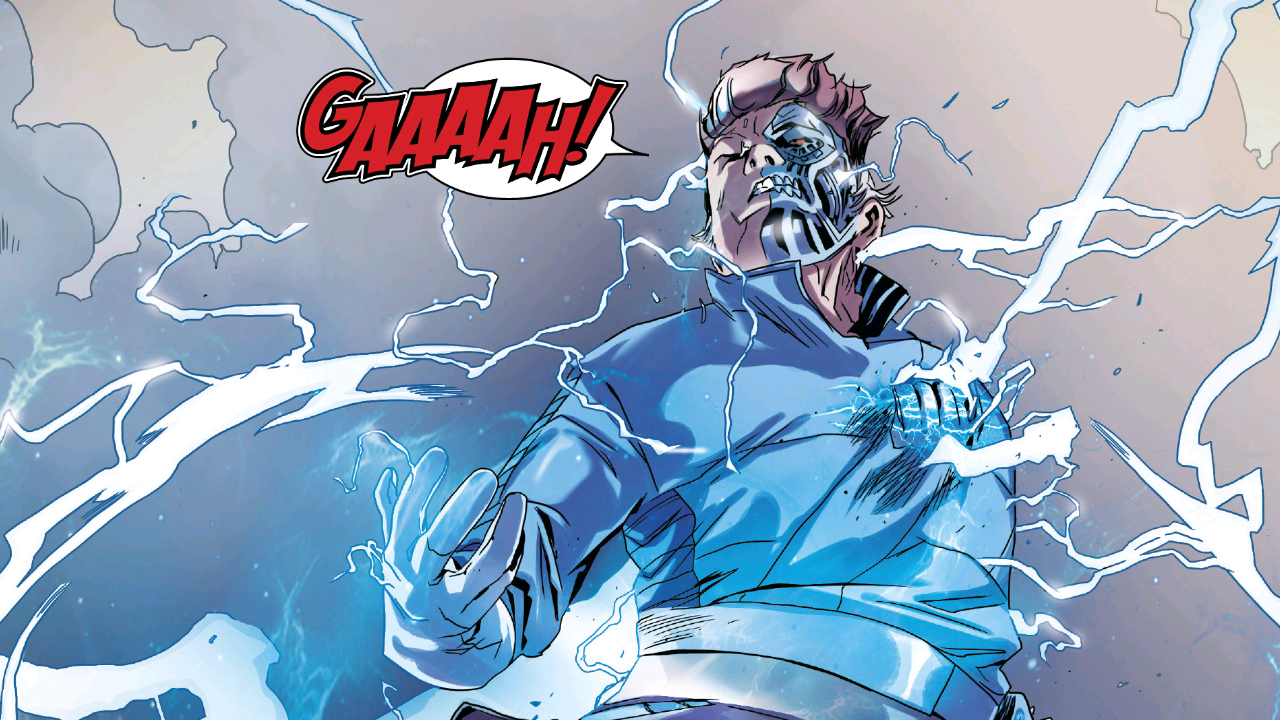 I assume that Valance will somehow escape the clutches of Vader as there are still two issues left to go in the series, so it will be interesting to see how that plays out. This issue read like a final issue itself so I’m excited to see what other surprises are in store and what more we can learn about Valance and the mysterious Hidden Hand moving forward. Will Valance survive the wrath of Vader? Who exactly is behind the Hidden Hand? I guess we’ll know everything in just a couple of issues. 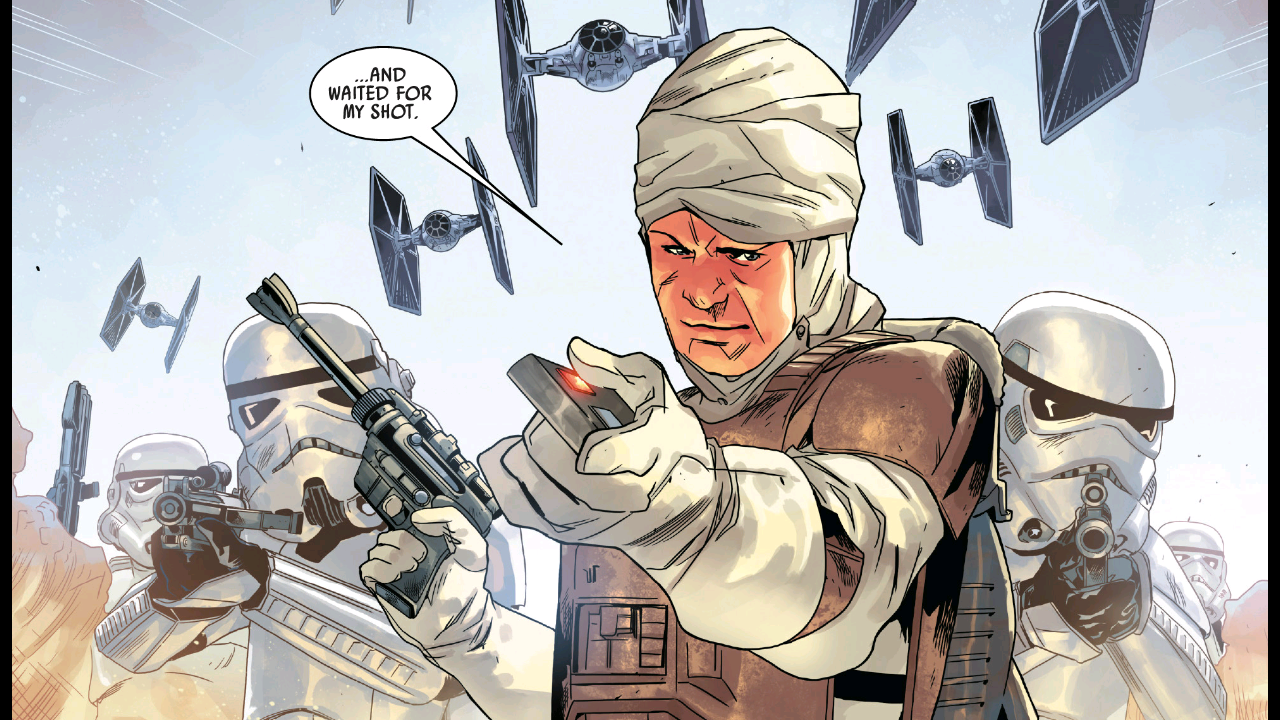 This series has flown under the radar compared to the press that some of the more popular series have gotten recently. With the titular Star Wars series on the verge of a massive change in the status quo and Doctor Aphra also about to come to a close, there’s not been a whole lot of talk about Target Vader. But I think as far as comics go, it definitely deserves a little more attention. It’s not groundbreaking. It doesn’t alter your perception of any existing characters or change your understanding of the saga in any way. But it is a good comic with some solid action and excitement. I definitely recommend giving it a read.

Star Wars: Target Vader #4 is available now in a comic shop near you or online at Comixology. Happy reading Star Wars comic fans! 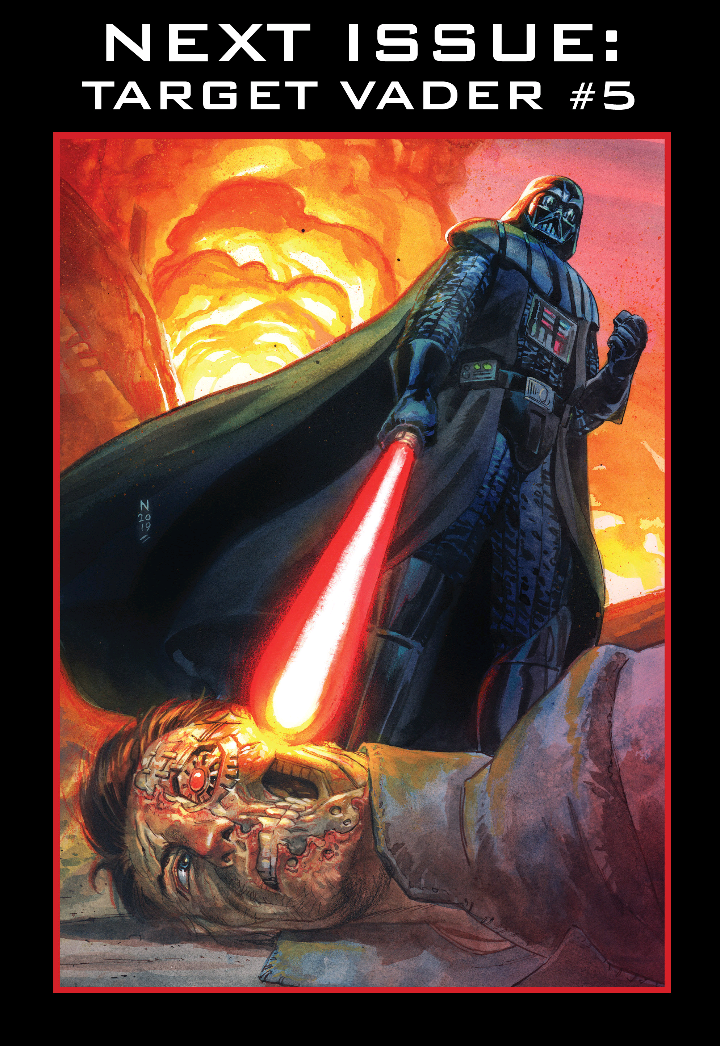