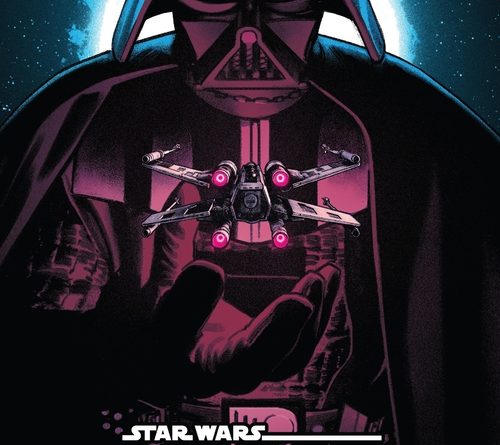 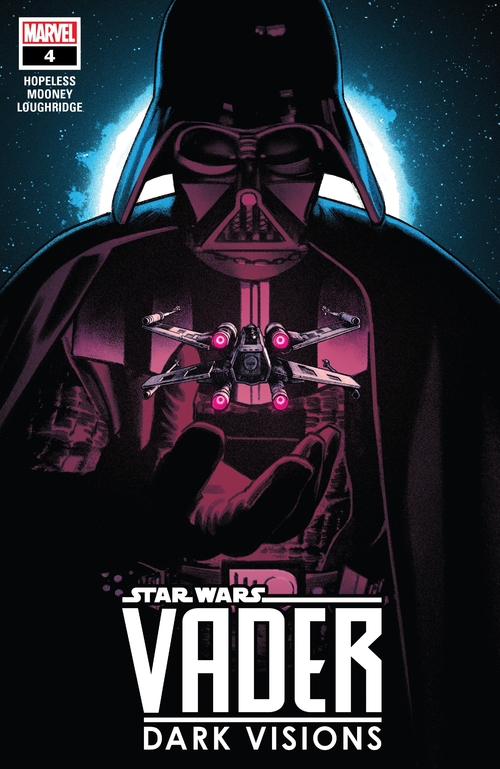 NEVER MESS WITH THE BEST! We all know DARTH VADER as THE EMPEROR’S iron fist, but as any rebel can tell you, he’s also a terror in a TIE Fighter. What does it feel like in that X-WING cockpit when you’re nose-to-nose with the EMPIRE’S deadliest pilot? Will you even live to tell the tale, hotshot?

When you start reviewing a series, you have some idea what it is about, whether from publisher’s description or writer’s statement. After reviewing the first issue of this mini-series, I thought we were getting a comic that will show us the influence a monumental figure like Darth Vader can have on the world around them. While it was told from the point of view of a single, unnamed protagonist, Vader’s impact was planetary. And my hopes for the series were high.

But, from that point on, it became clear that the scope and impact of the series was much smaller. While the protagonists of each issue were always the intended focus, Vader’s impact remained rather small, sometimes restricted to them alone. We are nearing the end of this run and in this issue not even that much is the case. Everything that happens to our protagonist is pretty much his own doing or stems from who he is as a person.

The issue opens on Coruscant some time in the past. A smuggler is caught by storm troopers while his hidden son observes. Once the man breaks into run, the kid is supposed to cover his escape. But, when that happens, the boy learns that he cannot shoot and his father is killed.

Years later, we witness a seeming defeat of Rebels by the Empire in the space battle. In reality, a small group of pilots is hiding in depowered ships waiting for the Imperial shuttle carrying the minister to depart and be marked by a tracker. The pilots (commander and a ‘kid’ among them) follow. 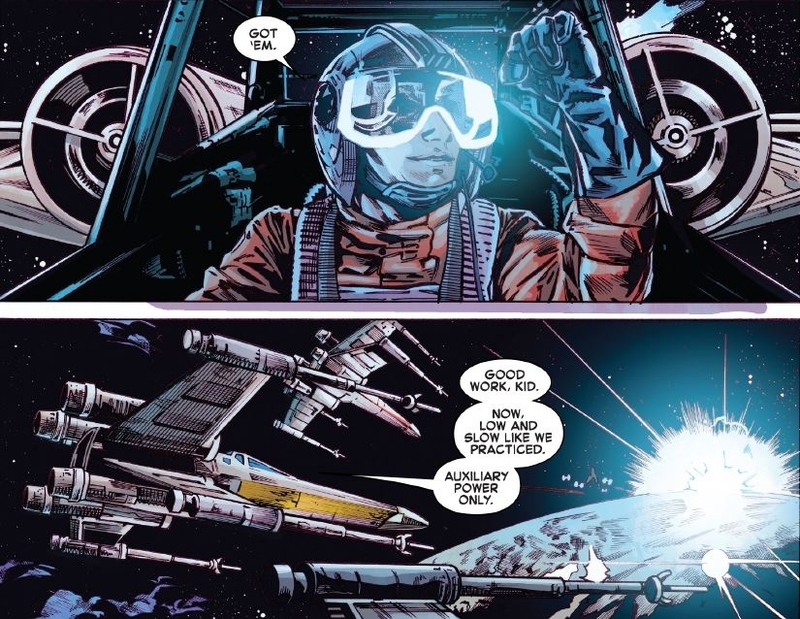 Back in the past on the rebel outpost of Jamiri, a commander is lecturing new X-wing pilots and potential recruits about Imperial ships and the way the Rebels fly – smart and together. A young man who we are to presume is both a kid from Coruscant and a ‘kid’ marking the Imperial shuttle, asks where he can get his own X-wing. The commander shows him the way to recruitment office and tells him that she will be seeing him in five years.

While the commander continues with her lecture, the young man, dissatisfied with her answer, sneaks into one of the X-wings nearby. He powers it up, clearly knowing what he is doing and gets his place in the Rebellion. 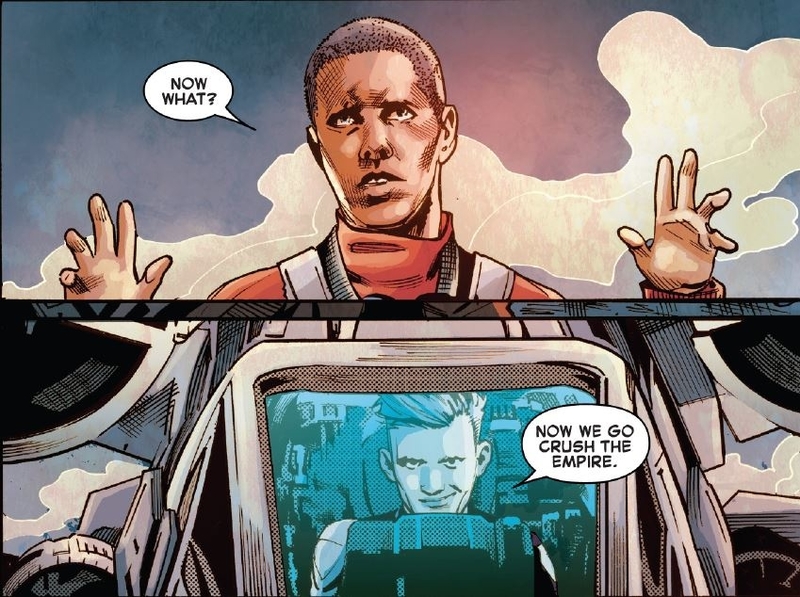 In the present, the minister arrives on the Imperial Supply Moon. He learns that he is not the only visitor – Darth Vader is overseeing the upgrades to his TIE Fighter. Before the minister can even finish his greetings, Vader senses the arrival of Rebels. The minister is killed in the attack and Vader engages the Rebels in his TIE. 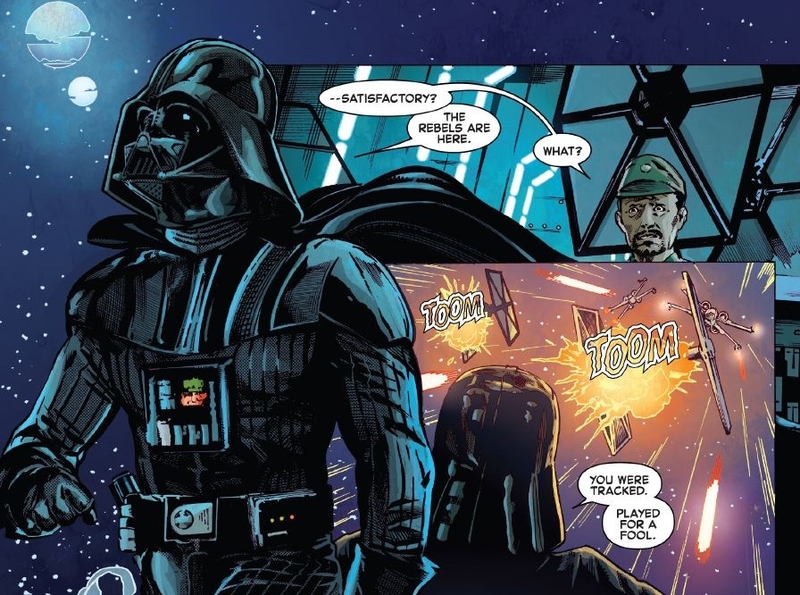 Again in the past on Jamiri, we see the Rebels planning to learn the exact location of TIE factory by losing the battle, tracking the minister’s ship and allowing their best pilots to bomb it. The kid crashes the meeting to which he wasn’t invited. The commander tells him that he might be the best pilot in the simulator, but what she needs experienced fighters who know what they are capable of. The kid is allowed to speak and he tells everyone his story – how he failed to act and watched his father die. He asks for the opportunity to take the shot – he will take it. The commander is ordered to take all of her best pilots on assignment, kid included. 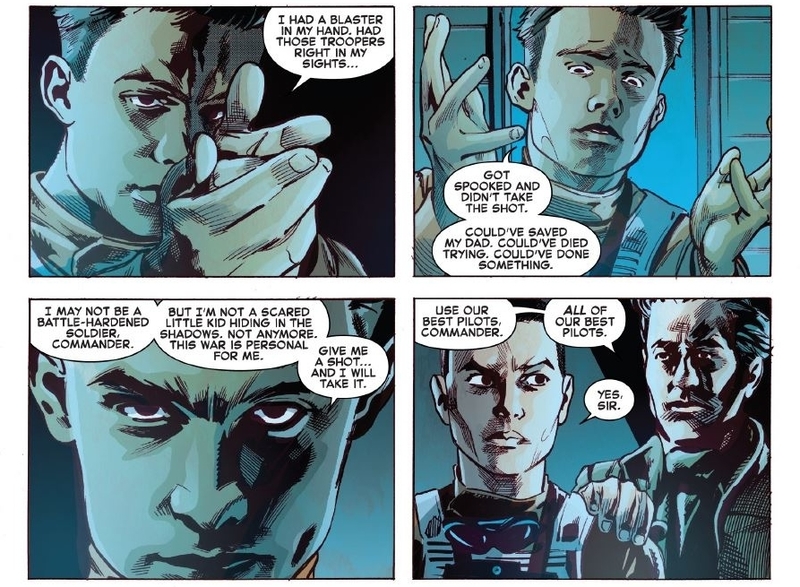 In the present, above the Supply Moon, the space battle rages on. The kid manages to hit Vader’s ship, but that doesn’t diminish his piloting abilities: he continues mowing through the Rebel pilots. The young man panics, but commander tells him to calm down. They will work together; not even Vader can shoot two moving targets at the same time. She acts as a bait, drawing Vader to her and giving the young pilot opportunity he asked for, to take a shot against Vader and, therefore, the Empire. 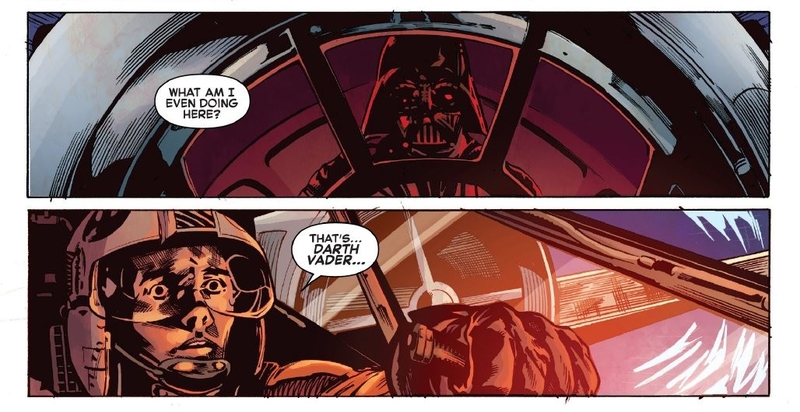 At this point, you can choose to decide what happened: whether Vader influenced our protagonist or he once again couldn’t make the shot. He runs leaving his commander and everyone else behind. Personally, I am choosing the latter for two reasons. First, the depiction of our protagonist as a child and as a young man is literally the same, without any progression. He was cocky before and he is cocky now and he fails to deliver on his promises. Secondly, not everyone is cut out to kill even from a distance, even a monster like Vader.

The kid returns to Jamiri. He is clearly still panicking and reliving what happen, making it difficult for other Rebels to communicate with him. He tells them that everyone, including the commander, is killed by Vader. There is no time for explanations, since the Imperials led by Vader followed him to the outpost which is now under attack. Our protagonist failed to take the shot against the Empire he wanted so much. 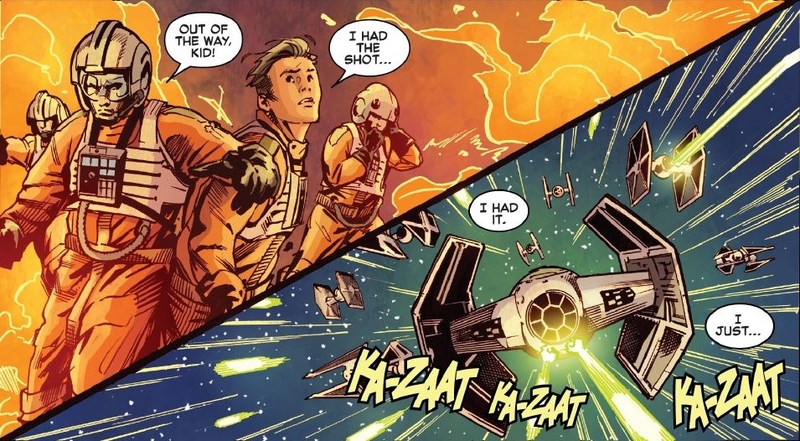 If you followed the ratings of this mini-series we’ve given in our reviews, you can see the sharp decline. As I said at the beginning, the series fails to deliver on the promises of the first issue. However, in spite of it, each of the subsequent issues had something to tell us either about Vader’s impact or about Vader himself. The fear of Vader drives the officer insane in the second issue, while young delusional woman from the third issue acts as an exaggerated mirror of Vader’s own obsession.

In this issue, the conflict stems from our protagonist and Vader’s involvement is accidental. We learn nothing we don’t already know about Vader and, if he wasn’t involved, young pilot’s weakness would manifest somewhere else with the same result. He is cocky, he is skilled, but he is not a killer, not even in war. And that’s it. Hallum does make you root for him and I recognize that this is a skill too, but this doesn’t deliver the ‘dark vision’ at the end.

Story impact aside, the art team (pencil & ink by Stephen Mooney & colors by Lee Loughridge) deliver some stunning panels of space combat and destruction. And it’s the art that pulls the issue over the ‘chuck it in a wholesale bin’ line.

Maybe we were spoiled by the previous, excellent Vader entries into the new canon but, so far, the results of this comic run were, in my opinion, middling. Whether the mini-series garners eventual recommendation would very much depend on the next, final issue. Until then, if you want Vader content, there is plenty to choose from. Darth Vader: Dark Lord of the Sith by duo Soule/Comuncoli could be the best bet.

Until the final entry in the series, 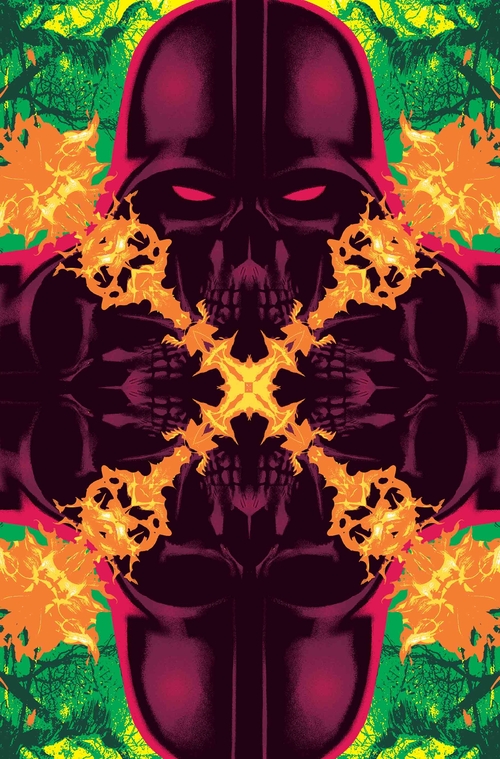 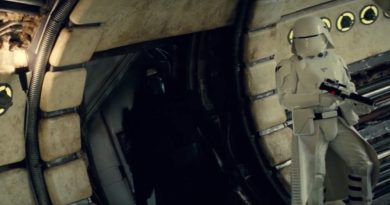 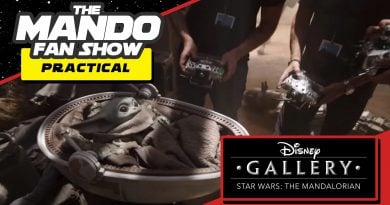 The Mando Fan Show Episode 13: ‘How Could We Love Baby Yoda More?’ 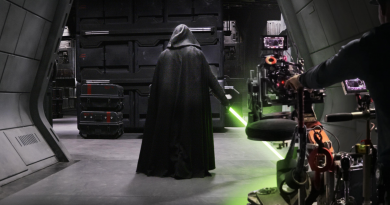 ‘Disney Gallery: The Mandalorian, Making of the Season 2 Finale’ — Review