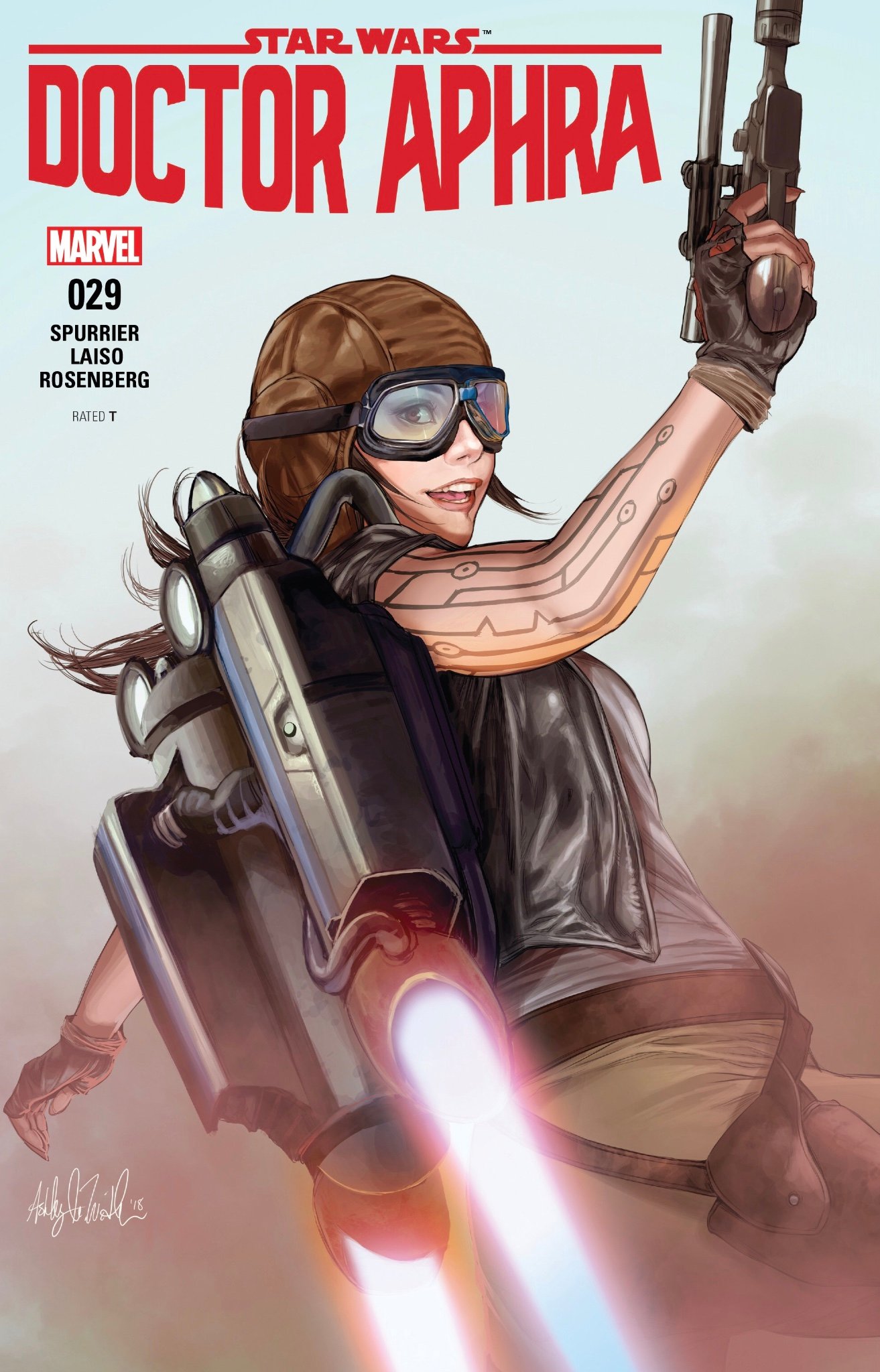 It’s great to have Doctor Aphra back this week! The doctor and her unlikely partner, the murderous droid Triple Zero, are still navigating the dangerous world of Milvayne in search of an expert to disarm the explosive devices that bind them. Dr. Cornelius Evazan has been broadcasting their wild adventures across the galaxy and the Empire’s propaganda machine, the Coalition for Progress, is ready to put their thumb on the scale. If this weren’t dire enough, a pair of trophy hunters turn bounty hunters and a hook spore possessed enforcer are also gunning for the doctor. SPOILERS AHEAD….

The opening of this issue is definitely a departure from the previous entries in “Worst Among Equals”. The Empire has taken note that this spectacle of Aphra and Triple Zero racing for their lives is playing out across the galaxy on the Holonet. If you remember, Dr. Evazan has a video feed broadcast from Triple Zero’s eyes and he’s piping it into the Holonet. The Empire is not happy. Milvayne is a model Imperial world, so the Empire isn’t too thrilled the galaxy is starting to cheer on a couple of outlaws. This is a very interesting look into the psychological grip the Empire struggles to keep on the galaxy. We all know that totalitarian governments must carefully thread their authority in a balance of subtle and not-so-subtle. This hooded figure represents the top of the Coalition for Progress, but we never learn her name. I suspect the reason they’ve taken note is the unfolding tale of survival risks giving the more desperate parts of the galaxy the dreaded ‘H’-word…hope. 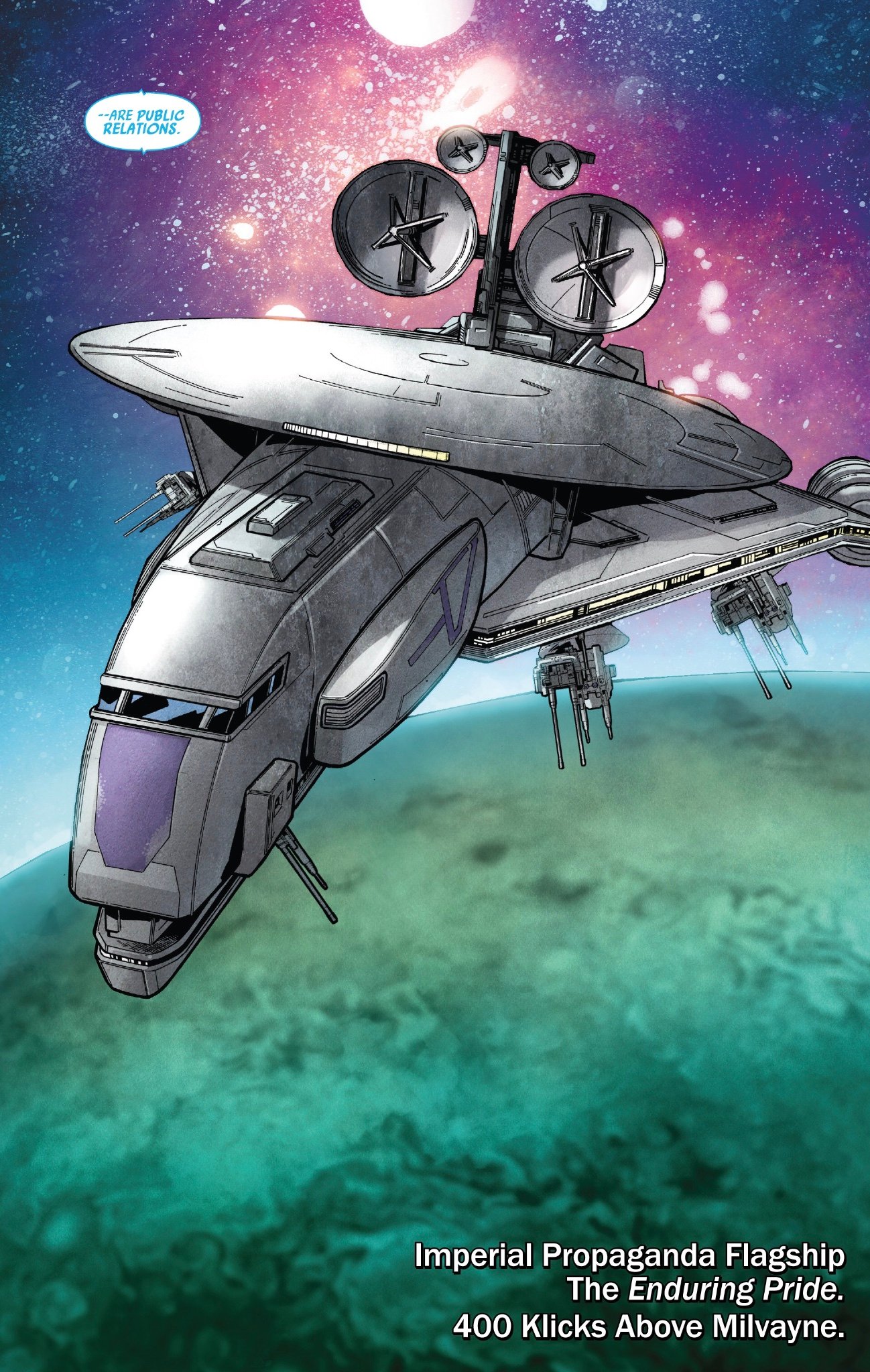 Not only are they monitoring, but they’ve dispatched an Imperial Propaganda Flagship. The mysterious commander has deployed this ship in case the Empire needs to intervene to change the narrative. Mostly what they are concerned about is the weaknesses that may appear in the rule of law. As we know from past issues, Milvayne has a swift and brutal justice system and we’re seeing now the incentive is no doubt to curry favor with the Imperial brass. The last thing the Empire wants is brazen defiance of the law as the entire galaxy watches their HoloNet. Again, a fascinating look at how the Empire assaults the minds of its populace to tighten its control and the perception of morality in the galaxy. 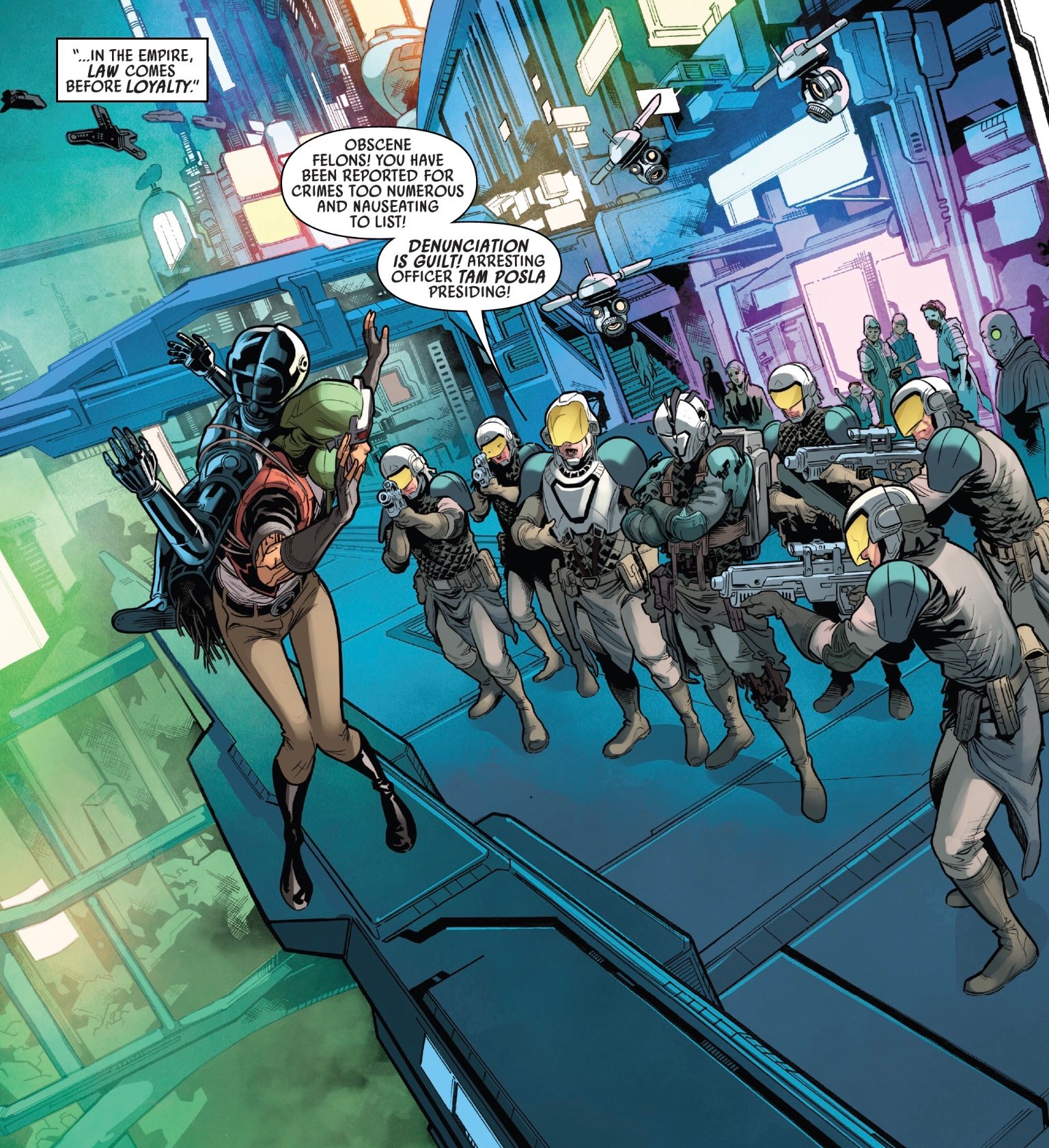 Hook-spore possessed Tam Posla has finally caught up with Aphra and Triple Zero. He’s amongst his fellow law enforcement officers who’ve yet to realize Posla is not himself, but this zombified version has no problem taking the law into his hands. In typical Milvayne style, Posla calls for their immediate execution but Aphra turns the rule of law on him. Aphra exposes Posla for the vigilante he is, describing how he abandoned the law to go vigilante and catch Dr. Evazan. She’s convincing enough as the other law enforcement officers turn their weapons on him. It goes to show the law is bedrock to Milvayne society, but can also be tricky for those who override its thresholds. 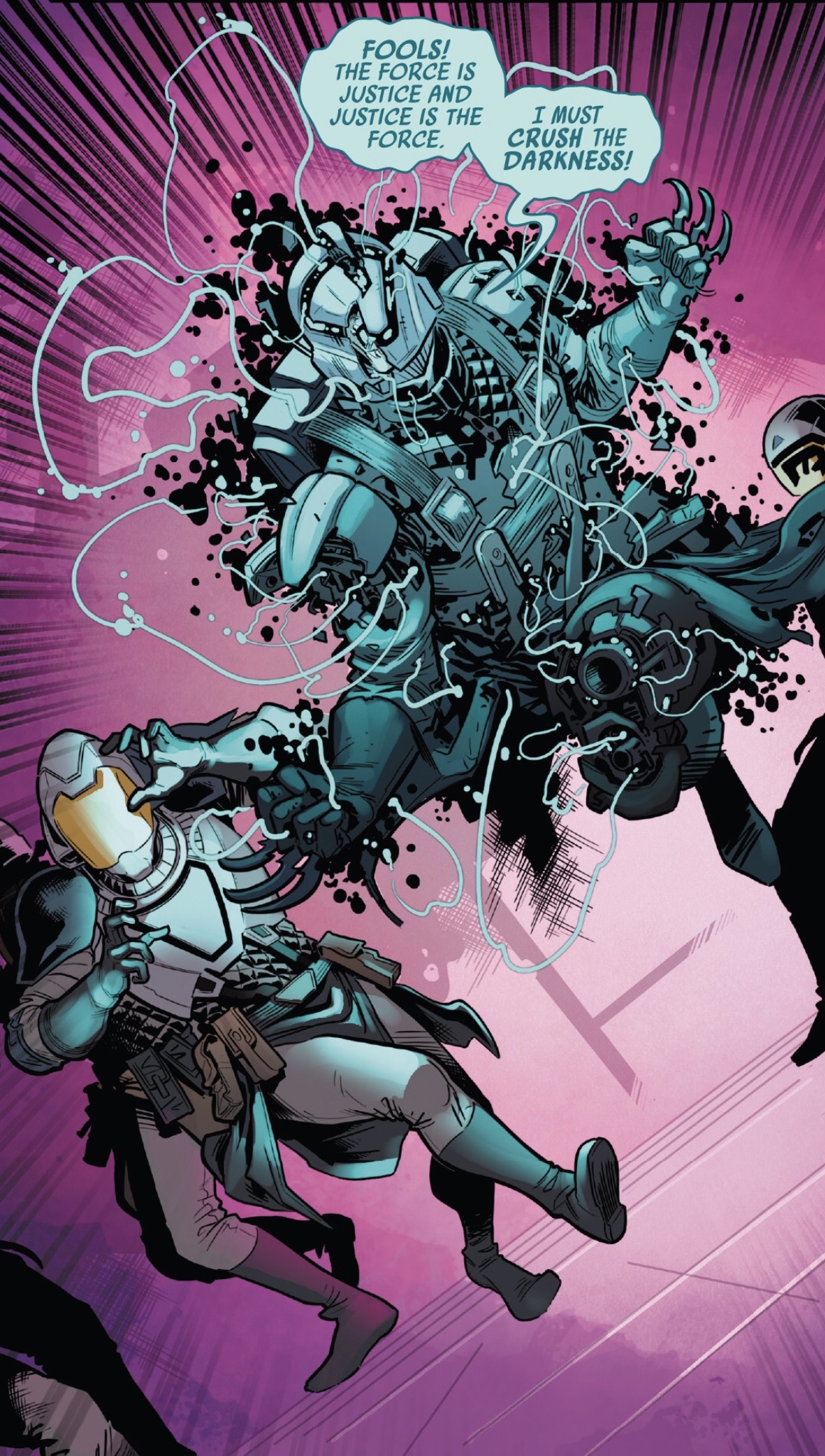 Apparently, vigilantism is a much bigger deal than what Aphra and Triple Zero are being hunted for because these Milvaynian enforcers turn on Posla quick. It’s a useful distraction for the fugitives, as they use it to escape, but unfortunate for the unsuspecting officers. The hook-spores are a force to be reckoned with and I don’t think this will be the last we see of Posla. As Aphra and Triple Zero escape justice, the mysterious Imperial commander monitors the various reactions of people watching. This is a full 1984 Orwellian hat-tip, with the authoritarian gatekeepers putting their finger on the pulse of reaction as their propaganda spills from the screen. The Empire is not accustomed to losing control of what’s being seen, but they can still see how their citizens are affected by it. The Imperial commander is unamused by the spectacle unfolding on the HoloNet. 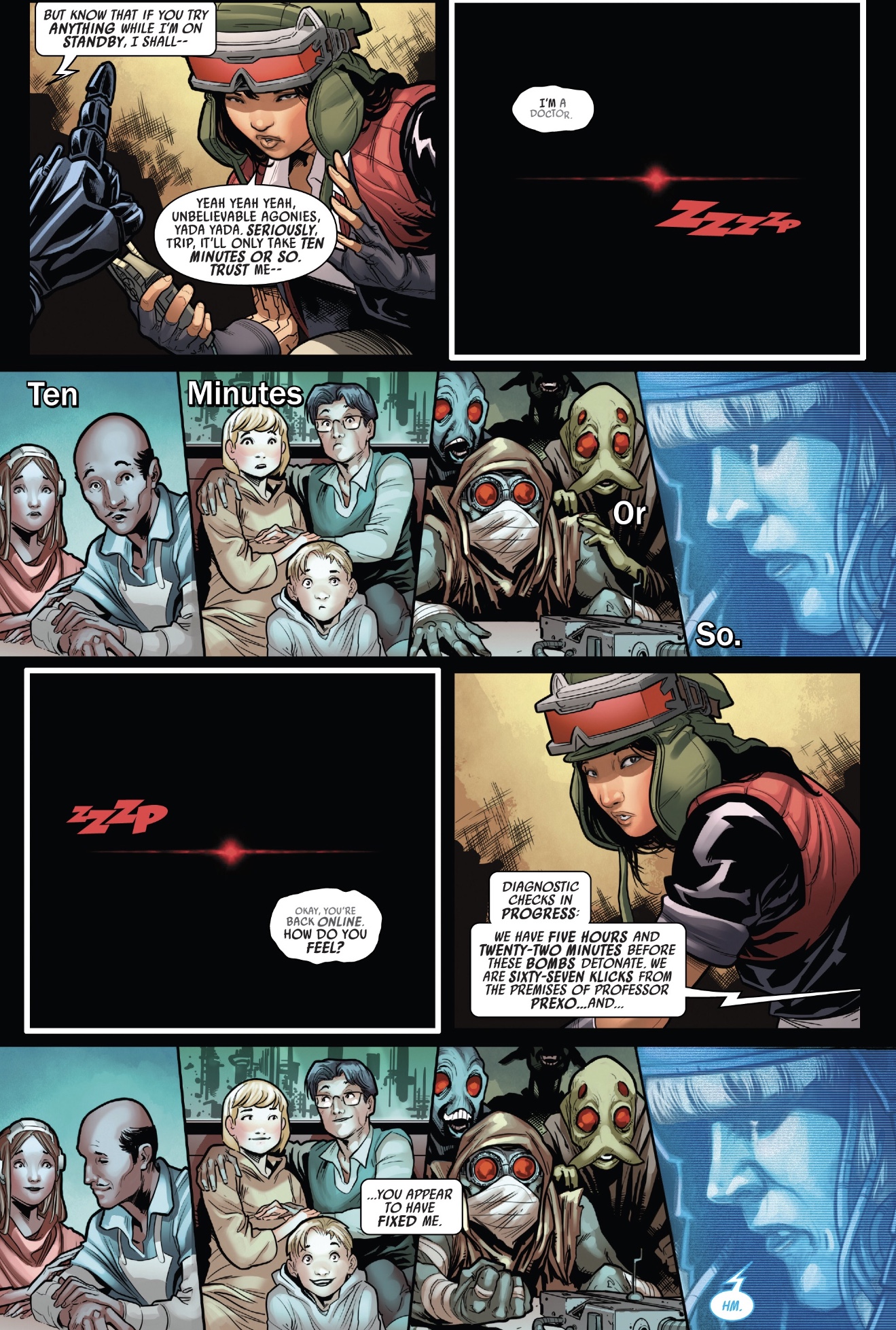 We get a cool moment here when the audience is held in suspense because Aphra has to deactivate Triple Zero to fix his legs. Hauling the droid across Milvayne is slowing them down as the clock ticks. Since the spectacle is being broadcast through Triple Zero, everyone at home watching has to wait ten minutes to find out what happens. I think we can all relate to that cliffhanger terror a viewer may feel as their program is coming to an end but so much is unresolved. This seems to catch the Imperial commander’s attention again, indicating that the populace is starting to cheer on those who would defy the law. That’s dangerous. 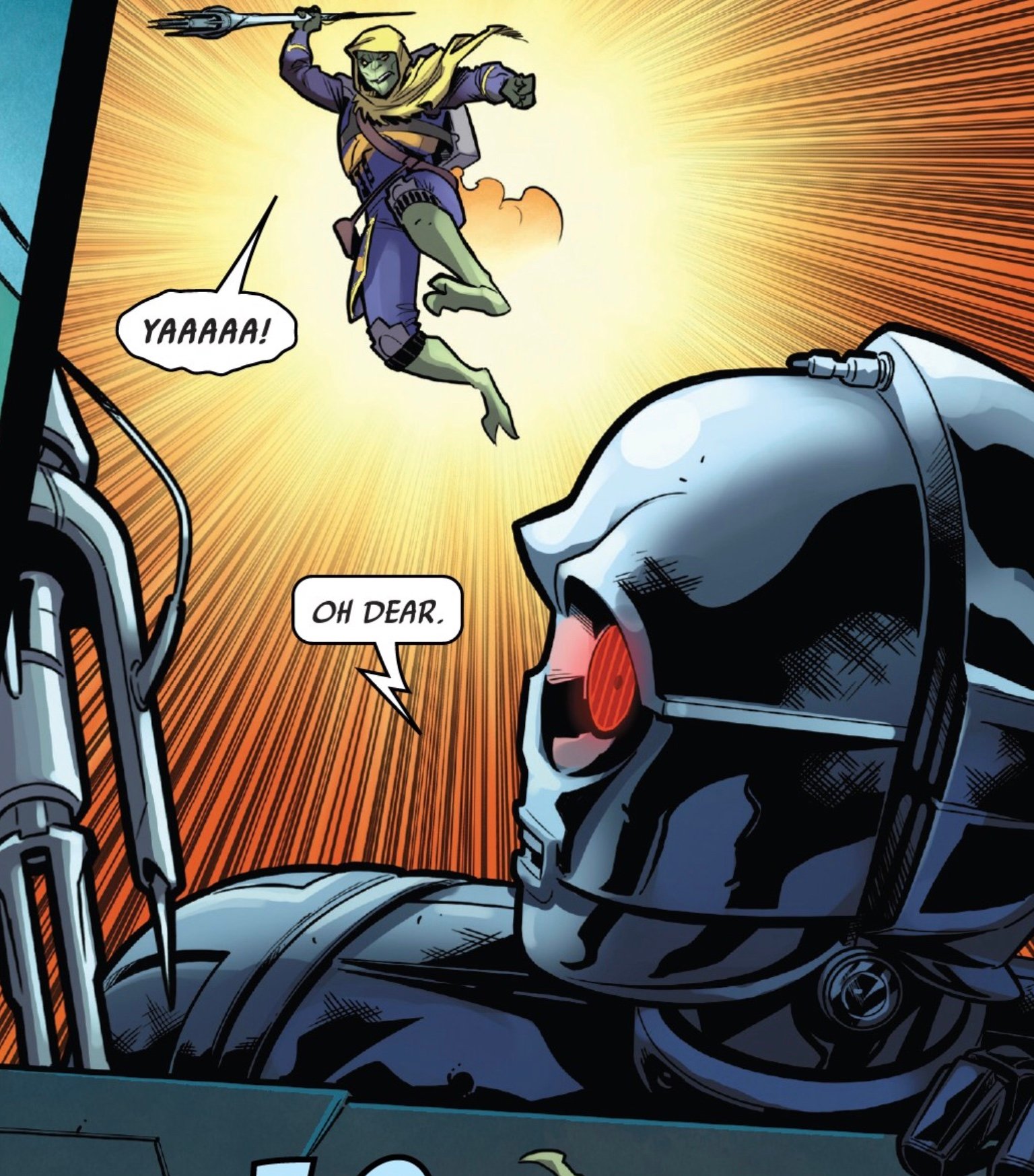 Speaking of danger, our favorite hunters are back in the game. Triple Zero manages to grab Aphra just as Nokk tosses her spear in the doctor’s direction. The chase is on in the skies of Milvayne. Aphra and Triple Zero jump car-to-car, trying to evade whatever trap Nokk and Winloss are eager to spring on them. The art by Emilio Laiso and Rachelle Rosenberg is especially vibrant in these scenes and it’s been excellent throughout “Worst Among Equals”. These frames are very cool and the action is tightly contained. Just as Nokk is about to go in for the kill on Triple Zero, she’s blasted out of the sky by the presumed to be dead BeeTee. Triple Zero is thrilled his psychotic, astromech counterpart seems to have survived, so he hops to the adjacent vehicle BeeTee took his shot from, with Aphra in tow. What does Admiral Ackbar say? 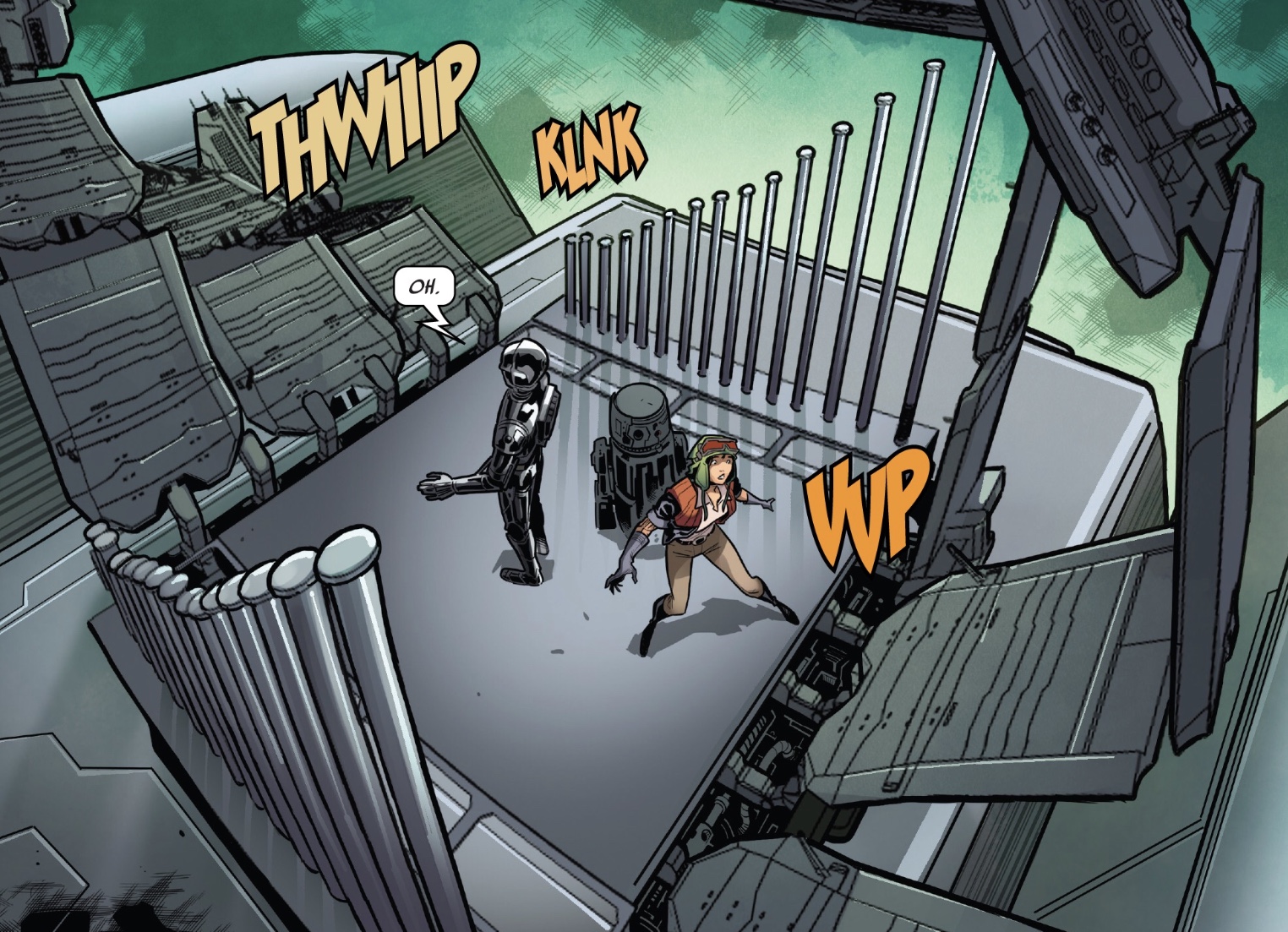 It’s a trap!! Aphra and Triple Zero are lured to BeeTee’s supposed corpse, just as Winloss cages them in. Once this happens, the Coalition for Progress notices an uptick in civilian unrest and the Imperial commander needs to come up with a solution. One thing that’s been consistently highlighted since these newer Marvel titles started rolling out is that the Empire is terrified of unrest in the galaxy. They know the power of the people and that a functioning Republic thrived in the galaxy they currently dominate, so all it could take is a little hope to burn it all down (sorry to sort of steal your line, Poe). The Imperial commander decides it’s time to step in and intervene. 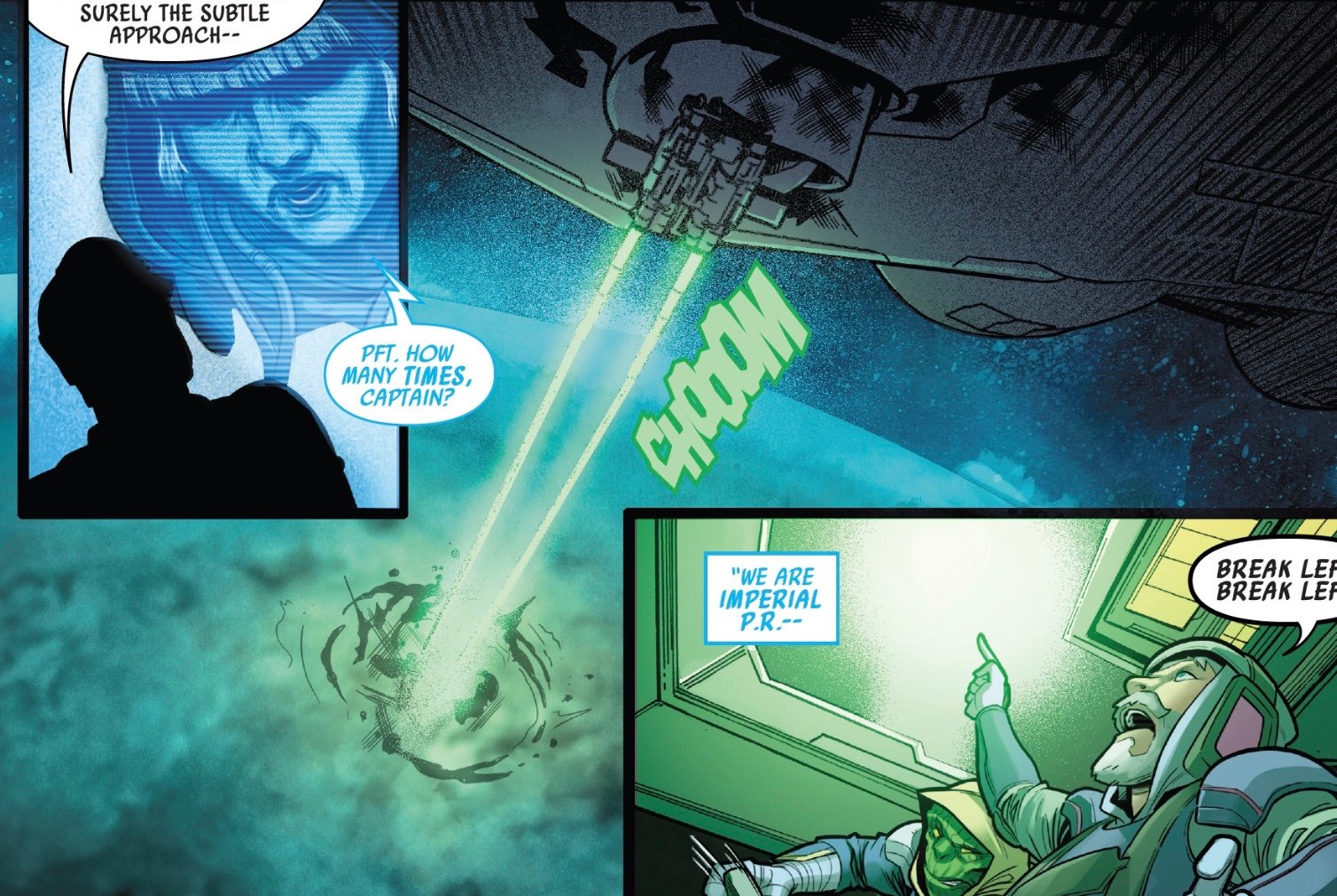 The PR ship has blasters and the mysterious commander orders them to end this. Winloss and Nokk manage to escape the blast, but Aphra and Triple Zero are trapped in the cage as the vehicle plunges toward the lower levels of Milvayne. The Empire is done with this “reality” programming, but they still weren’t able to take Triple Zero out. I imagine they’re going to have to get their hands dirty if they want to stop that.

Lots of uncertainty for Doctor Aphra and Triple Zero. Things are bad enough with a countdown to death and now they are headed right back into the abyss of Milvayne’s lower levels. I wonder if they’ll be reunited with Vulaada, who betrayed Aphra in the previous issue and wasn’t even mentioned in this one. They set her up as such a relatable character for Aphra it seems like she may return and help the doctor out when she needs it most. The list of adversaries just keeps adding up for Aphra and Triple Zero; the hunters, Posla, local authorities, and now the Empire. It will be a miracle if they make it off Milvayne alive.

This was another great issue from writer Simon Spurrier. He’s really found his stride writing Aphra and this whole arc has been consistently good. If we could just lose those two droids I’d be a happy reader, but I’m not hating Triple Zero as much as I initially did. Doctor Aphra has not expanded into strange parts of the galaxy as much as I hoped, but the hook-spores are pretty unique and I look forward to the doctor exploring more uncharted areas in the galaxy as soon as she gets out of this pickle. 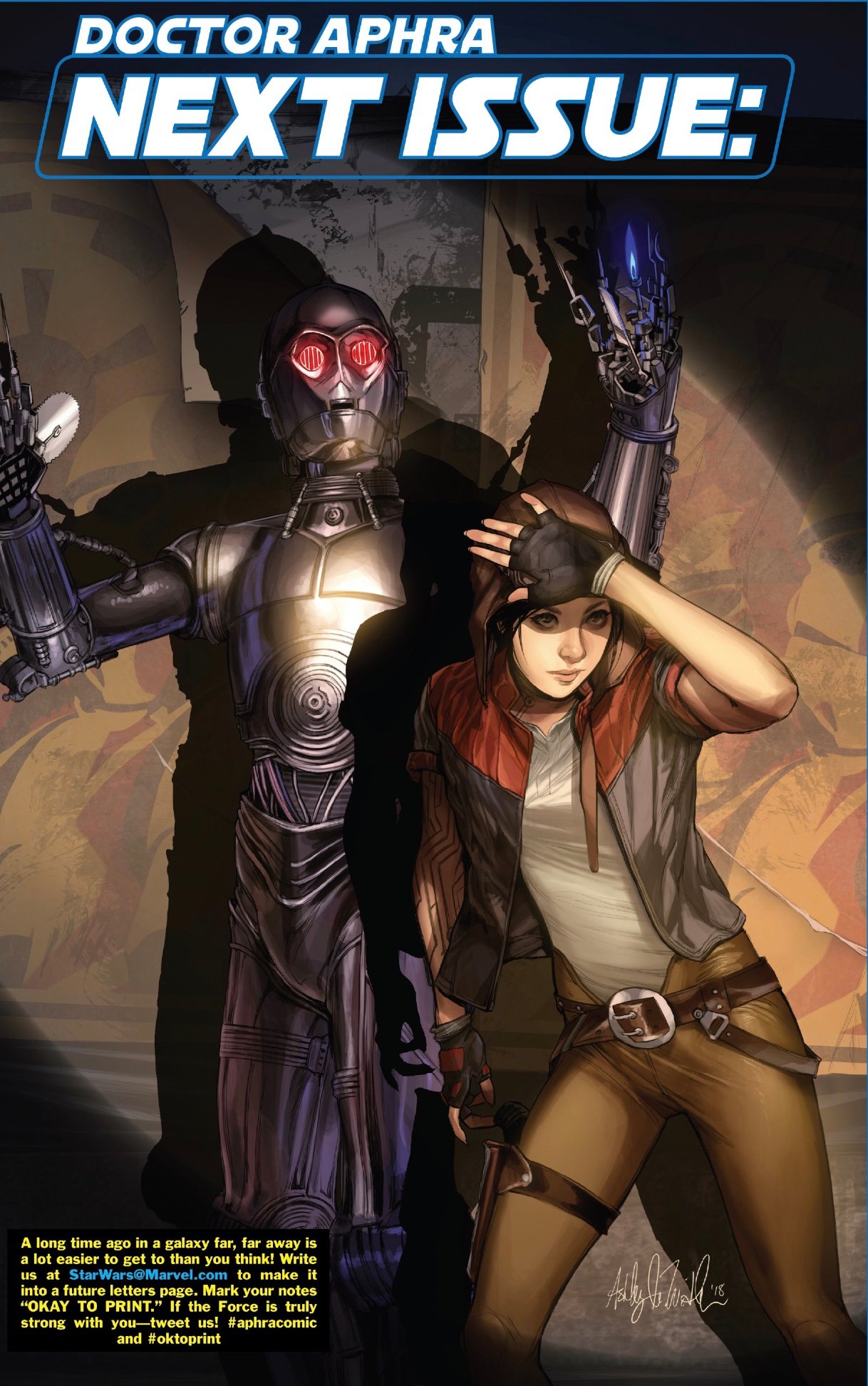