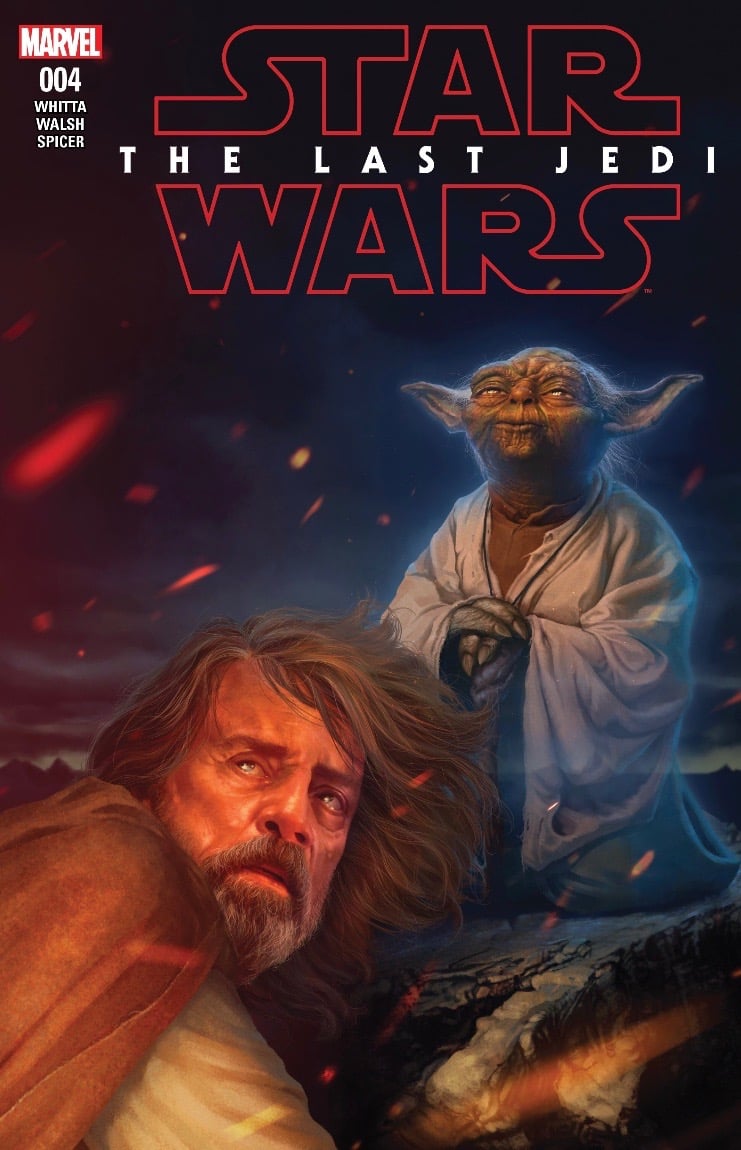 Marvel’s adaptation of The Last Jedi continues this week as Luke comes clean about what really happened to Ben Solo and the First Order is ready to finish off the Resistance. Not much is looking good for our heroes in a galaxy far, far away, but Rey has not given up hope – she just isn’t sure where to find it. This review revisits the story of The Last Jedi, so if for some odd reason you have yet to see it, beware of that before clicking through.

The issue picks right back up on Ahch-To after Luke discovers Rey has been in communication with Kylo Ren. One question that rattled around my head at this point: Did Luke have any firsthand knowledge of what Ben Solo had become other than what Rey told him? I wonder this because with the mixture of remorse Luke has about Ben Solo’s fall to the Dark Side, he also seems quite convinced Kylo Ren is beyond redemption. It makes me curious if Luke just headed straight for Ahch-To after the massacre at his Jedi Temple; or, if he tried to search for Ben Solo and the students who followed him that would eventually join Snoke and form the Knights of Ren. Obviously there’s still a Knights of Ren and Kylo story to be told before the events of The Force Awakens, but it seems like Luke came to the conclusion Kylo Ren was beyond redemption before he declares it in The Last Jedi (and also finding out about Han’s death at Kylo’s hands). Just some food for thought. Interesting that Rey asks “Did you created Kylo Ren?” instead of “Did you try to kill Ben Solo?“. I like what writer Gary Whitta has done with some of this adaptation’s dialogue.

You won’t often hear me complain about director of photography Steve Yedlin and director Rian Johnson’s visual approach to The Last Jedi, but I do prefer the vivid colors used in this scene by artist Michael Walsh and colorist Mike Spicer. It looks much more explosive and shocking, not that there was anything wrong with this scene on film, I just think this adds to how shocking the scene is. This issue made me take notice of how downtrodden Luke Skywalker is and how affected the loss of his nephew was to him. That’s probably stating the obvious, but I alway interpreted Luke’s grief in The Last Jedi as being more broad about his failure to the Force and what he once thought his life’s purpose was in the galaxy. That angst felt much more specific to me in this issue.

Yoda’s appearance to Luke plays just as well in the pages as it did on film. I loved this scene in The Last Jedi, and Gary Whitta adapts it very well here. The back and forth between he and Luke about whether or not to destroy the first Jedi Temple and the sacred Jedi texts is almost non-existent. Yoda comes out Force-willing lightning bolt blazing, in a more abrupt way to facilitate the conversation about how Luke needs to look beyond himself and the Jedi to teach Rey the ways of the Force. For me, this scene pretty much guarantees that Luke will continue to instruct Rey and that we will see him in Episode IX. Not trying to turn this review into a speculation thread, but I’d be surprised is we don’t learn Luke has been frequently communicating with Rey after The Last Jedi and into the events of Episode IX. Yoda is just as firm here that the time has come for Luke to pass on what he has learned about the Force and that Rey’s future is now something he is a part of, whether he likes it or not.

The only thing that disappointed me in this issue is that we didn’t get an homage to Laura Dern’s now famous “pew-pew” moment when she emerges through the smoke to stun Poe. Other than that, I love how they’ve captured Holdo on the pages. She’s just as badass and no bull as she was in The Last Jedi and she’s another character I hope we get more stories about in Dave Filoni’s upcoming Resistance.

I loved what Mike Walsh and Mike Spicer did with this scene. I’m not trying to apply for some badge of honor, but I’ve seen The Last Jedi over a dozen times now and this scene between Leia and Holdo still has me reaching for the tissue. The backdrop here as we see a ship starting it’s perilous journey to Crait underscores the emotional impact Holdo’s sacrifice had on me, as well as the acceptance that Leia continues to lose the ones she loves. The First Order has done a number on Leia’s life and the ones she loves, and I think it’s the lack of grief she’s been allowed that always breaks my heart. Too many losses. 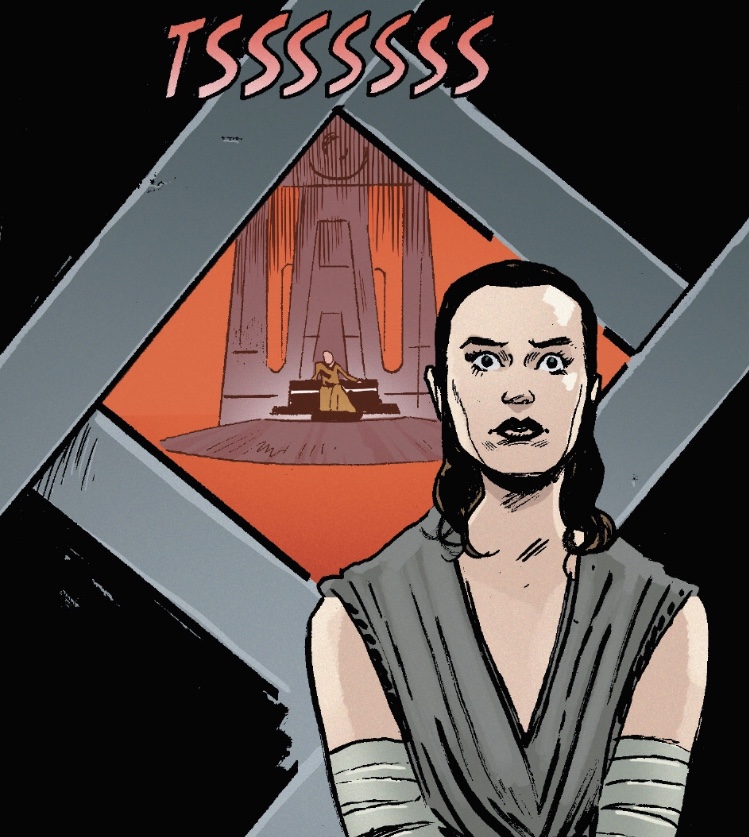 This is my favorite frame from the issue. This is just after Kylo Ren tells Rey he knows who her parents are. The look of shock from both his betrayal and the fact that he now possesses knowledge Rey has searched for her entire life is something I didn’t get in the film. Not saying that’s any fault of Daisy Ridley’s incredible performance, just not something I picked up on as much as I do here. If anything, that’s one of the reason these adaptations are so great:  they get the audience to pick-up on things that they may not have noticed. Just as Marvel’s excellent adaptation of Rogue One made me see the film in an entirely different way, this adaptation will probably change the way I watch The Last Jedi. That’s saying something, since it’s my second favorite Star Wars film, so far.

The team behind this adaptation had a very tall order to adapt a film as visually stunning – with an equally complex story – and do it any justice. They’ve succeeded in every issue so far and I don’t doubt they will continue with remaining issues. The Last Jedi, however you feel about it, is a story told in painstaking detail in any medium, and that’s just as true here. Since most of you readers no doubt know the story, there’s no rush to own all of these issues unless you are looking to line your comic book collection with the variant covers (this issue’s, by Rahzzah, is my favorite). If you are trying to save some money, I’d say you’re not missing out if you wait for the entire series to be released in one volume. These issues are great and certainly worthy of your time, though. I’m excited to see how the throne room duel in the next issue plays out. 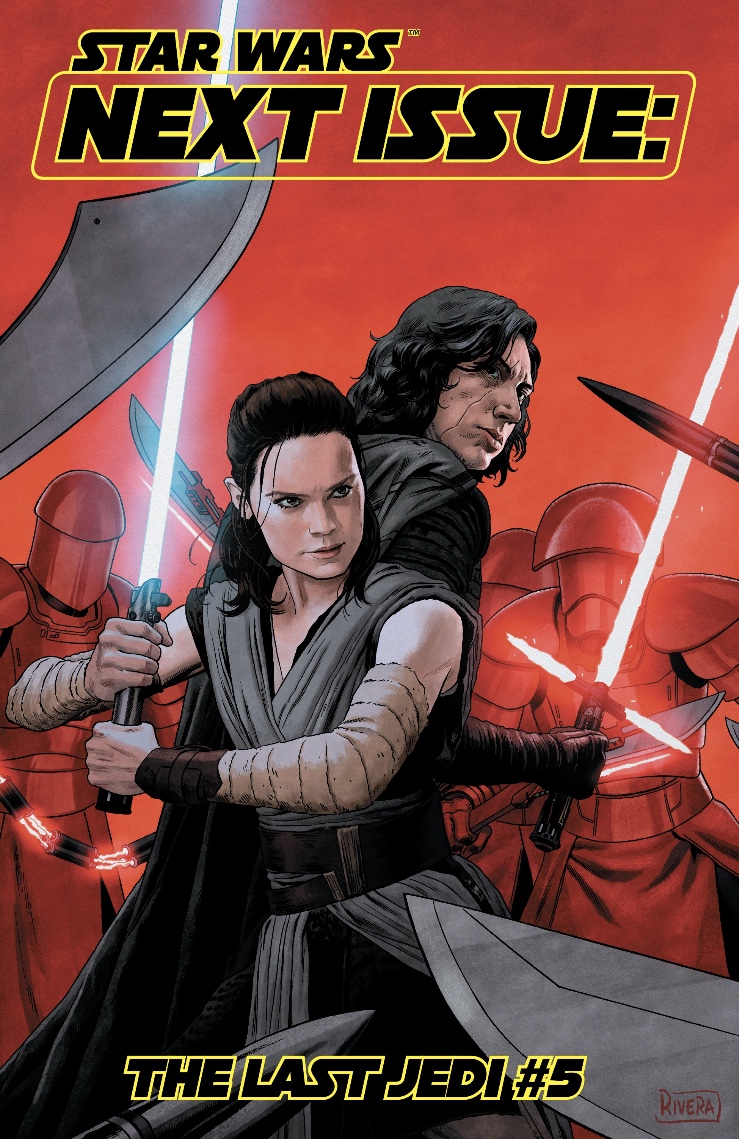