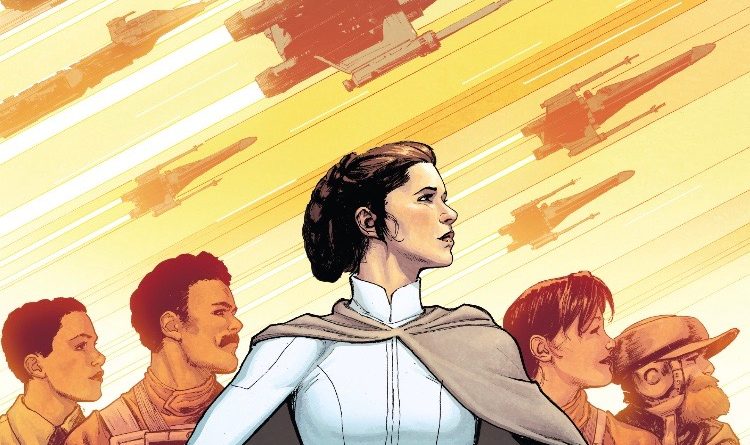 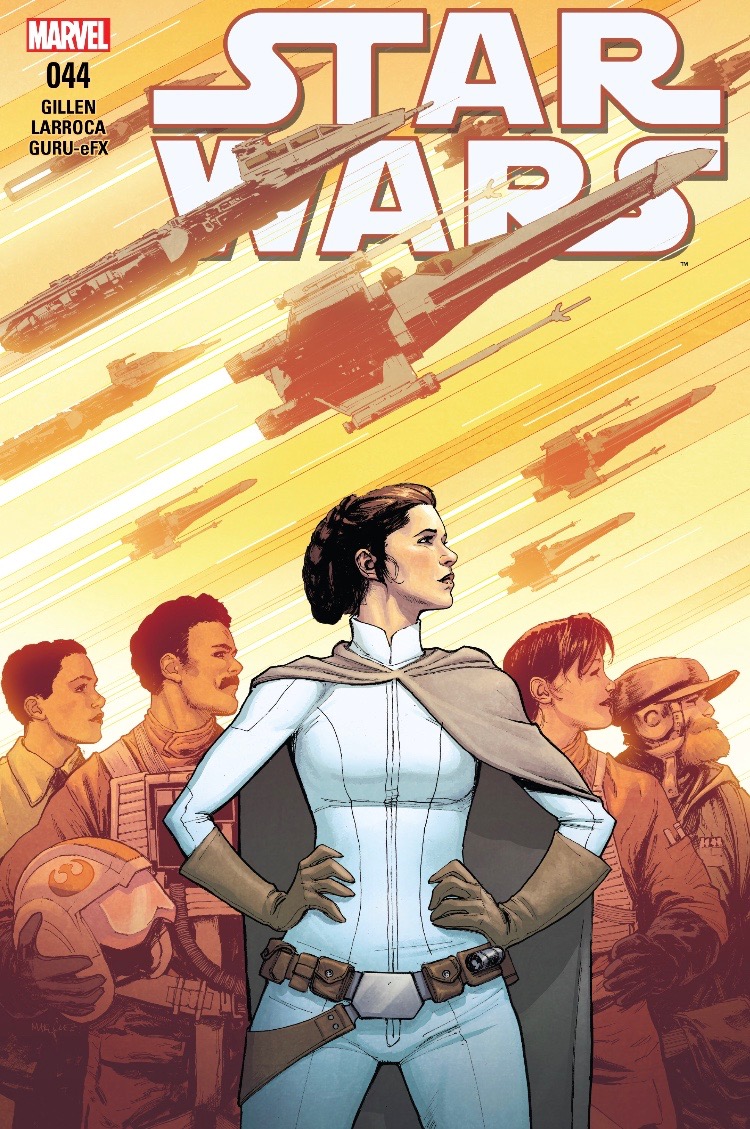 This week, Star Wars begins a new arc called “Mutiny At Mon Cala”. If you’ve been looking ahead in the Marvel catalogue, you’ll know that Darth Vader is about to head there as well, so get ready to get wet. This planet is no stranger to the Star Wars Universe, and the Mon Calamari and Quarren have both played pivotal roles in events that shape it. In this issue, Princess Leia leads our heroes to the oceanic world in hopes of finding a new ally in the fight against the Empire. SPOILERS AHEAD…. 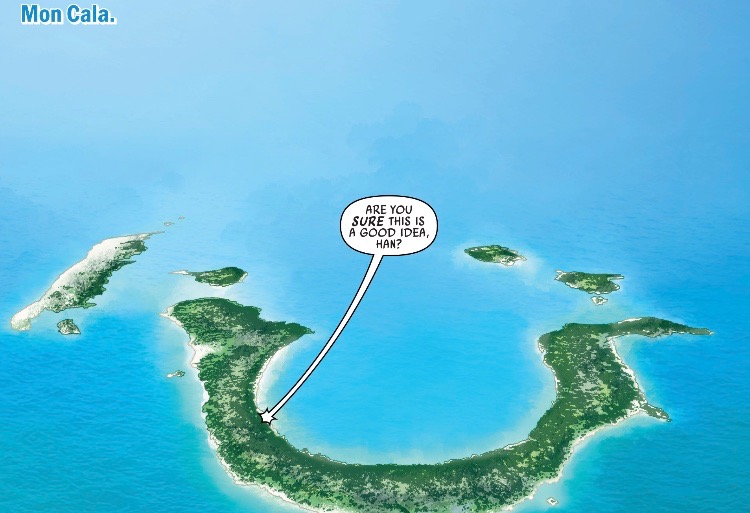 Ahhh….Mon Cala. It looks like a tropical paradise. Our heroes have gathered upon the beach of this small island with their guide, Admiral Gial “It’s a trap!” Ackbar, in an attempt to bring the Mon Calamari people into the fold of the Rebel Alliance. This doesn’t seem to be taking place very long after the events of “Ashes of Jedha”, and the prologue crawl indicates the rebels are still without a base. Leia awaits a meeting with Grand Admiral Urtya, who’s in currently in command of the Mon Cala Mercantile Fleet. As the crew wait, Han and Ackbar note that the plant life of Mon Cala is it’s most hostile indigenous organisms.

Urtya is understandably skeptical of Leia approaching him to enlist his people and resources. Mon Cala is being flooded with Imperials looking to get a foothold on their resources. Urtya has no doubt seen what happens to other planets that resist, so for the safety of his people, he’s cautious. We have to remember that Lothal, Scarif, and the Battle of Yavin are extreme outliers of hope at this point. The galaxy is still essentially on Imperial lockdown and has been for decades. There’s not a lot of hope.

Just as the conversation gets started, an Imperial patrol shows up. Han tells everyone not to panic and that he will handle it. He figures it’s only a patrol and there is no one of consequence onboard, as well as counting on the bucket heads not knowing the two most wanted people in the galaxy are helplessly standing on the beach in front of them. 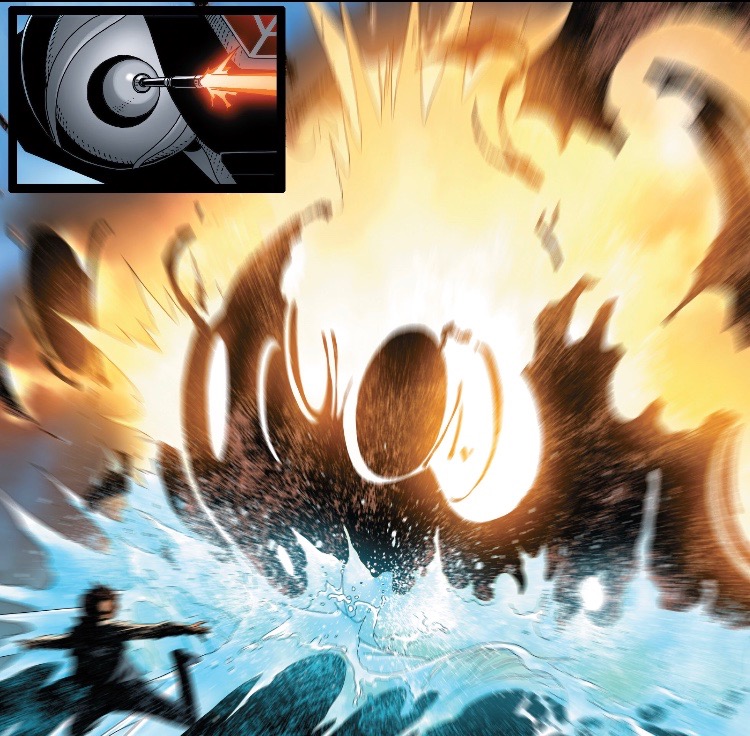 Okay, simple patrol or not, these troopers have blasters and aren’t afraid to use them. They destroy Urtya’s marine craft and certainly give Han’s cool demeanor a good rattle. Han shakes of some sand and water, once again assured their are no officers on board, and expresses confidence in that he knows how to deal with a ship full of bucket heads who will probably presume them to be petty smugglers. The Imperial ship sets down a little ways from everyone else, and Han takes Artoo to approach it.

Leia continues to press Urtya, reminding him the Empire is vulnerable. As Sabine reminded us this week on Rebels (short aside, congratulations to crew and cast on a fantastic series and finale!), the string of victories exposed a weakness in the Empire that Palpatine could never repair. Leia seems to be the one who is most aware of striking while the galaxy sees the Empire can be hurt. Disruption is the name of their game until the rebels can find their next big target, but Leia is focused on building up the Alliance so they are ready when that day comes.

The easiest way to an Imperial officials heart is a bribe, and Han seems to know that well. He notes to the Stormtroopers that usually a snooty officer would be stuffing the bribe in their pocket, but that the troopers can split this amongst themselves. I imagine Han is well-versed in the greasing of Imperial palms. What the Stormtroopers don’t know is the currency Han’s using is “thermal detonator”. The payment explodes, buying our heroes and Urtya time to make a run for it into the jungle of the island. Remember what Han and Ackbar said about the flora and fauna of Mon Cala being dangerous…well, now they’re in the thick of it.

Amidst the shooting and hiding among dangerous vegetation, Leia continues to lobby Urtya. She’s making the case that the Alliance has never been more united since Scarif and the destruction of the Death Star. Sure, they’re not necessarily winning, but Leia makes a great point that the Rebel Alliance is getting it’s act together and is now a formidable threat to the Empire. Between bullet points of this impromptu presentation, Leia manages to blast a few Stormtroopers as well, and that’s why she’s our princess. Urtya isn’t swayed as he should be. I dunno, if it were me and the person pitching me was taking out Stormtroopers between each sentence while maintaining eloquence, I’d probably say yes. Before the deadly plants can get them – though they actually never do anything – Chewbacca shows up in a boat to save the day.

The boat is equipped with blasters and we all know what Chewie likes to do to Imperials. As they skip across the oceans of Mon Cala, Leia comes clean with what the Rebel Alliance needs from Urtya: their merchant fleet. Mon Cala sports quite a fleet and Leia says the Alliance can turn each cruiser into a bonafide battleship.

Urtya fears reprisals targeting civilians if the Mon Cala Fleet suddenly shows up and starts blasting Star Destroyers. He considers Raddus a hero, but laments that Raddus is dead and the people of Mon Cala suffered for it. Another big problem is the Empire still has their king captive. They don’t mention him by name, but I assume it’s Lee-Char who we all saw fight for his throne in one of my favorite Clone Wars arcs. Urtya wishes he could help, but he doesn’t want to risk any more deaths among the Mon Calamari. 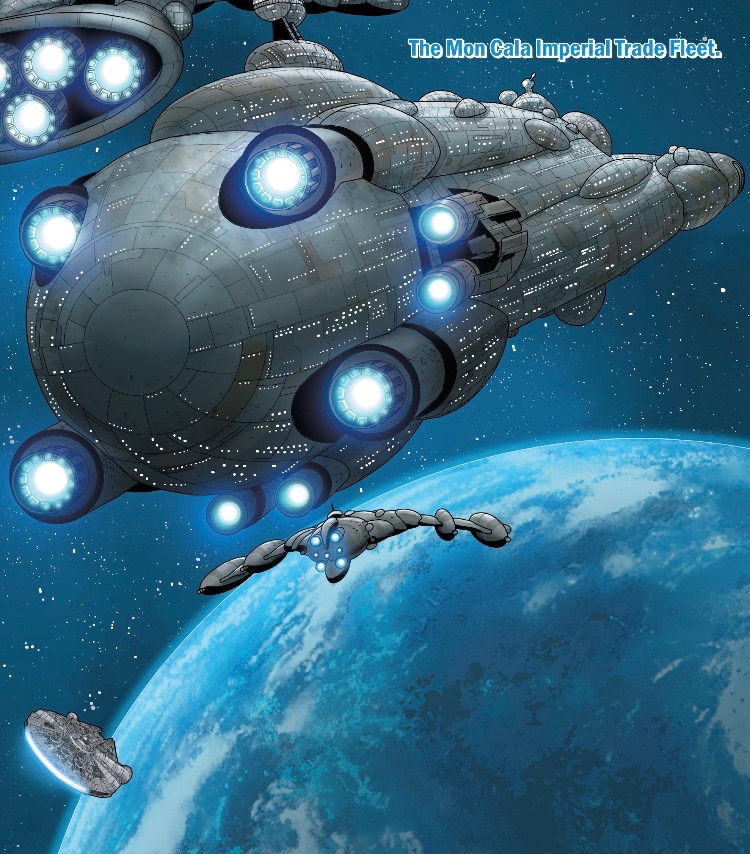 I know I was kind of hard on this series’ artist, Salvador Larroca, so I’d like to take a second to compliment him on this beautiful frame. Urtya ultimate rejection leaves Leia feeling pretty gloomy about the whole thing. She knows the Rebel Alliance needs those ships and she knows it’s only a matter of time before the Empire strikes back– so it’s hard for her to watch the ships that offer hope as the Millennium Falcon leaves Mon Cala. 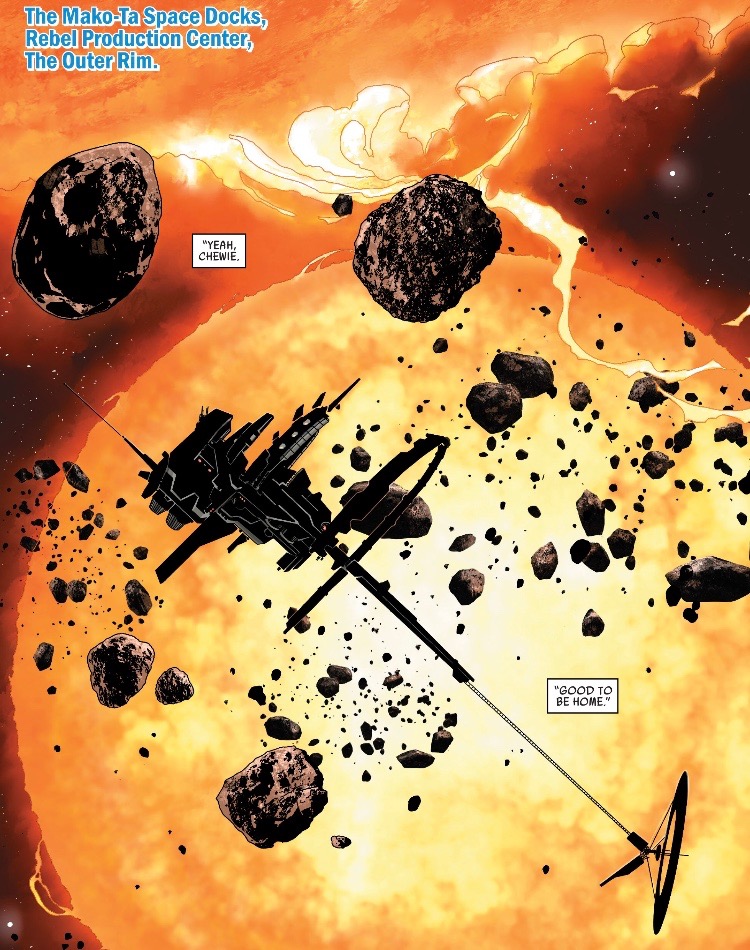 Another cool look into a remote Alliance base. We don’t really get to see much inside, but I get the sense this is where the rebels are posting up as they search the galaxy for a planet to call home. Makes sense they’d be as close to a star as possible to avoid detection. When they dock, Han grabs Luke and proposes they go get a drink. Leia has other plans and decides to reach out to a new friend she’s made who just so happens to be deeply embedded in the Empire.

You probably don’t recognize her through the scattered, broken transmission, but that’s Queen Trios. I’m happy to see her back so soon, even if it is in the form of a shoddy transmission. Leia has one play left to win over the Mon Cala and possibly get the assistance of their fleet, and she needs Queen Trios to help. Princess Leia wants to rescue the Mon Cala king from the Empire.

Nothing mind-blowing in this issue, but that’s alright. I felt parts were a little uneven, especially the teasing of deadly plants we never got to see in action. Maybe that was a setup for a future issue in the arc. It seems like artists Salvador Larroca has toned down his screenshot-tracing tendencies, and writer Kieron Gillen gave us a fast moving first issue to get this arc off to a good pace.

I’m assuming the story of how Mon Cala’s king was captured by the Empire will be told as Darth Vader is headed to the watery planet as well. I’m intrigued how these two titles will serve to tell the greater story of what happened on Mon Cala throughout the reign of the Empire. As the Mon Cala eventually played one of the biggest rolls in bringing down the Empire, it will be good to get more details on the heroes actually involved, aside from that “It’s a trap!” lobster fella. Just kidding, I’m an Ackbar fan for sure. 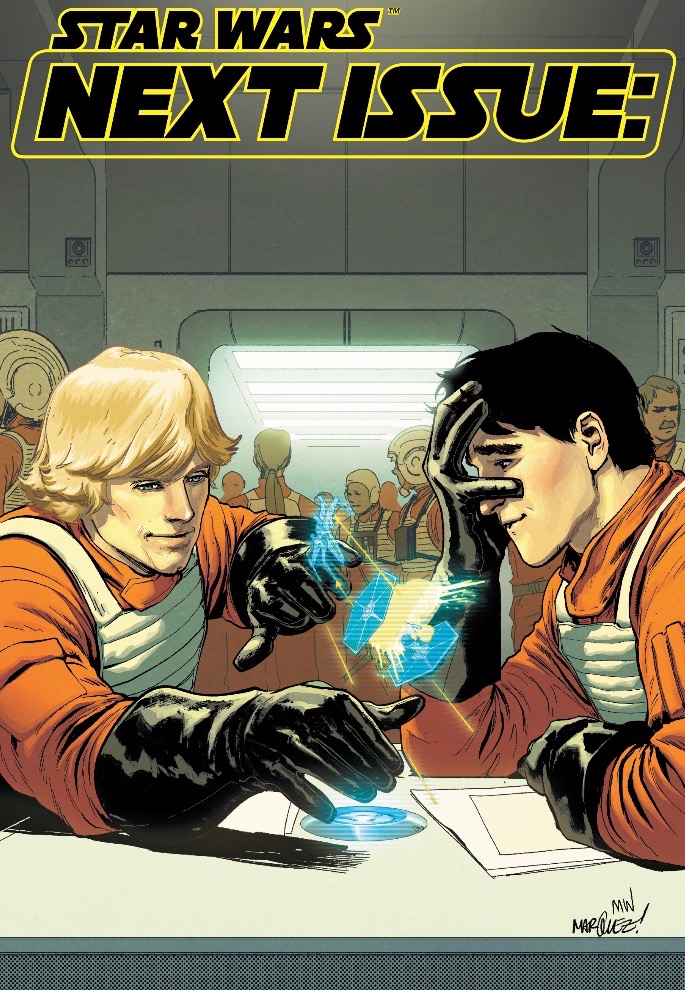 Editorial: What We Know and What to Expect From the Rest of the ‘Mandalorian’ Spin-Offs 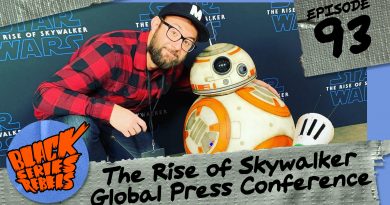 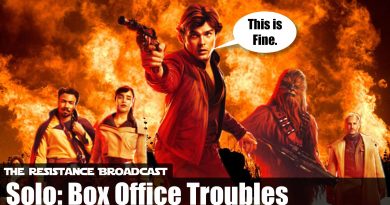