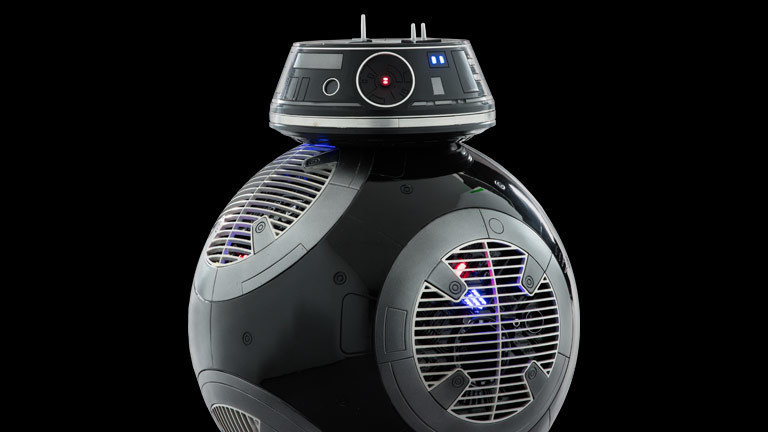 BB-9E, or BB-H8 as he is so nicknamed, is the First Order’s own BB Astromech droid that appears in Star Wars: The Last Jedi. Entertainment Weekly has just shared some information about the design of BB-8’s nefarious counterpart, and has revealed a little bit about how the droid is going to factor into the movie’s story.

Droid designer Neal Scanlan states that if BB-8 made your heart melt from the sheer cuteness of the droid, then BB-9E is the kind of creation that will be more likely to give you cardiac arrest:

“BB-8 has this huge personality and this huge heart, but you know, in a sense, I’ve always found it to have a sort of slightly manipulative quality. With BB-9E, we go back to literally the cold First Order sort of Empire version of what a BB unit might be. This was much more cold, calculative, much more direct.”

Scanlan notes that the eye of the droid is directly inspired by HAL 9000 from 2001: A Space Odyssey, and the lights themselves are reminiscent of the patrolling lights on a police vehicle.

Those expecting BB-9E to be spending a lot of time with General Hux or Kylo Ren may be in for a surprise, as the droid is stated to be something of a loner, perhaps having more in common with the mouse droids on the Death Star than anything resembling the relationship R2-D2 had with Luke or Anakin. While there’s not much indicating what BB-9E’s role in the plot will be, Scanlan insists that the droid isn’t just a background element, and it will be confronting BB-8 near the end of the movie. How isn’t explained, but Scanlan describes it as having an unlikely parallel to an iconic Star Wars story that we’ve already witnessed:

“There’s a lovely moment between BB-8 and BB-9E, which tells that sort of parallel story of Vader and Luke.”

I have no idea what he means by that, but if this leads to some kind of clever spoof of the whole “I am your father” thing spoken entirely in Droidese, then count me in.