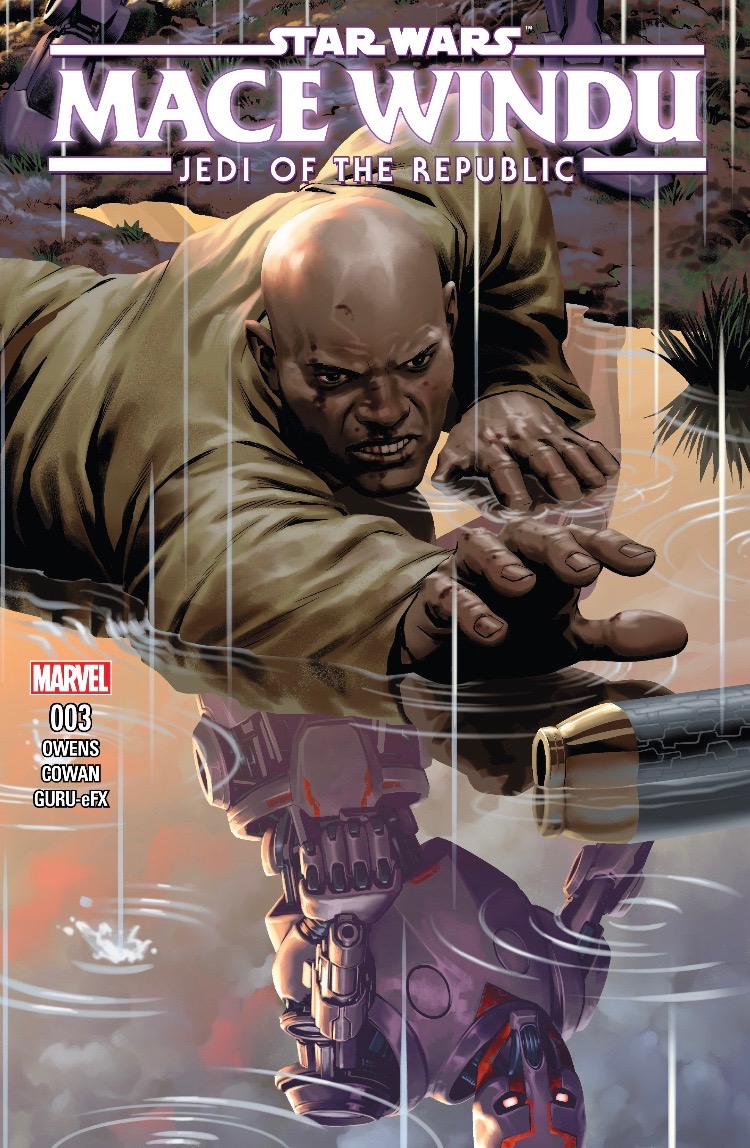 Not that Marvel’s Mace Windu: Jedi of the Republic has been all porgs and sunshine up to this point, but this issue took a real dark turn. Mace and his band of Jedi are still fighting against a droid mercenary who would help the Separatists ravage a unique, sovereign world, and now the Jedi must confront the ugliest places the Clone War may be taking them. The Force is certainly working in mysterious ways in this issue. SPOILERS AHEAD…

Well, I guess evil droids do keep in good company. Turns out that mercenary droid AD-W4 and Grievous share some familiarity with one another as both of their reputations have preceded their meeting. Grievous seems to be the one who singled out AD-W4 for the job of overseeing the Separatists’ “farming” operation on Hissrich. AD-W4 feels he’s a bit overqualified, describing his previous job in graphic detail, but when Grievous mentions there may be some Jedi to deal with, the mercenary is all in. I suspect we’ll get more on the history between General Grievous and AD-W4, as I’m sure once this thing goes bottoms-up for the Separatists, Grievous will be looking for answers. 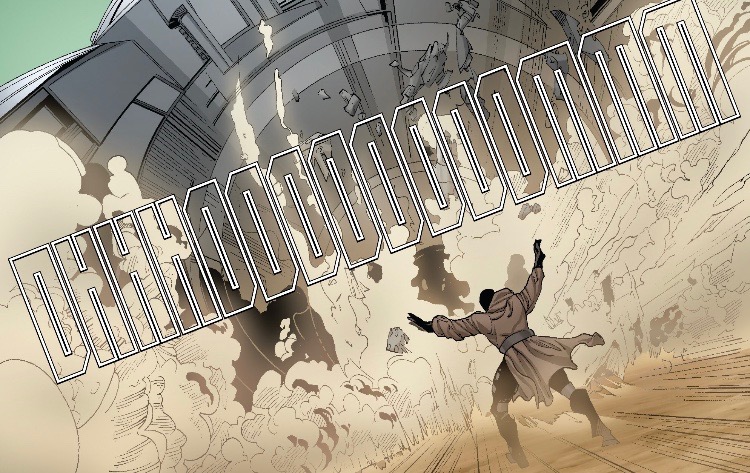 Mace is right where we left him, doing his Jedi Master thing. His abilities in the Force, especially when it comes to combat, make the rest of the Jedi who came with him seem a bit useless. I know that’s not the case, but Mace is handling everything the droids are throwing at him just fine. Despite Mace’s skills with a lightsaber, he realizes the planet is crawling with harvesters, gobbling up the unique geology of Hissirich, and it’s going to take more than him dismantling them one by one. 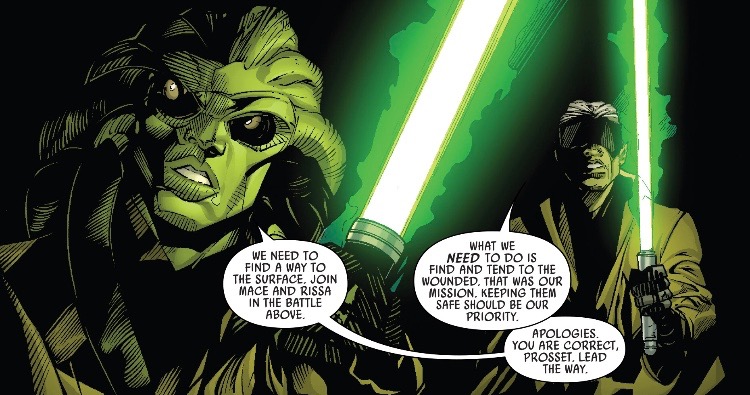 Kit Fisto and Prosset Dibs were left below ground after the initial droid battle. Since Dibs is already blind, he’s accustomed to using the Force and his other senses to guide him. Kit, on the other hand, prefers whatever small amount of illumination he can get from the glow of a lightsaber. The two try to establish their bearings and search for a way to rejoin their fellow Jedi. These frames by artist Denys Cowan and colorist Guru-eFX are easily my favorite in the series so far. Really eerie, as the Jedi begin moving through the darkness. 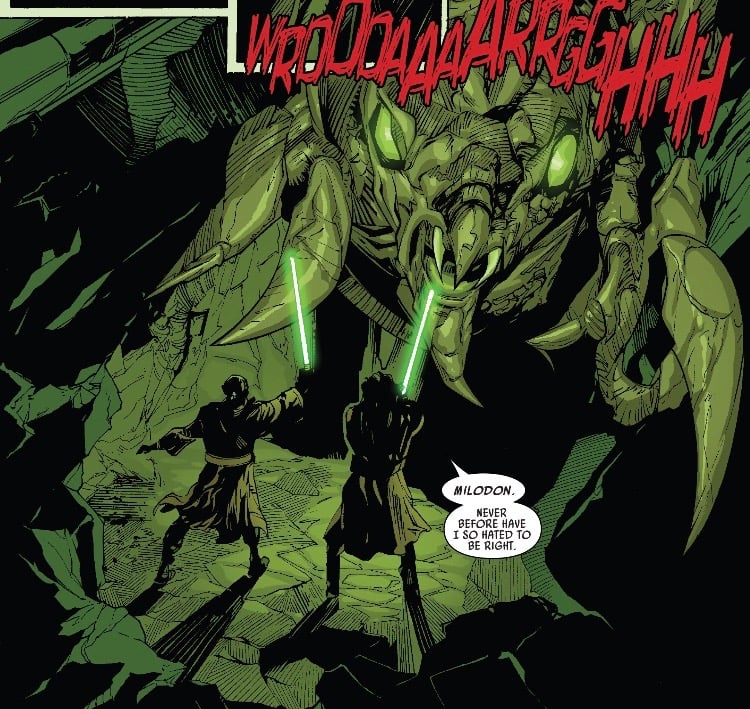 It wouldn’t be a dark cave without a monster of it’s own to throw in the Jedi’s way. Just before they ran into the monster, Dibs expressed his reluctance to rejoin the battle. He’s not there to dismantle droids with a lightsaber or fight on the frontlines of the Clone Wars. Dibs is a Jedi, but there are also shades of pacifism showing up in him. Dibs is more concerned with assisting the wounded, indigenous life being caught in the crossfire. The Jedi is certainly brave, that’s not in question, but he wants to use his courage to protect, not only to fight.

Well, there’s not really any pleasing General Grievous. At first, the droid general is pleased with the progression the droid harvesters are making, but when he hears AD-W4 took Mace out, he’s jealous he wasn’t the one to do it. Not only does this irritate Grievous, it inflates whatever ego and price AD-W4 had to begin with. Mace seems to have made a name for himself as “one of the fiercest warriors in the galaxy”. While that shouldn’t surprise any of us readers, it’s nice to have that reaffirmed. His actions later in the Clone Wars and taking on Darth Sidious only built upon his already legendary status in the galaxy. 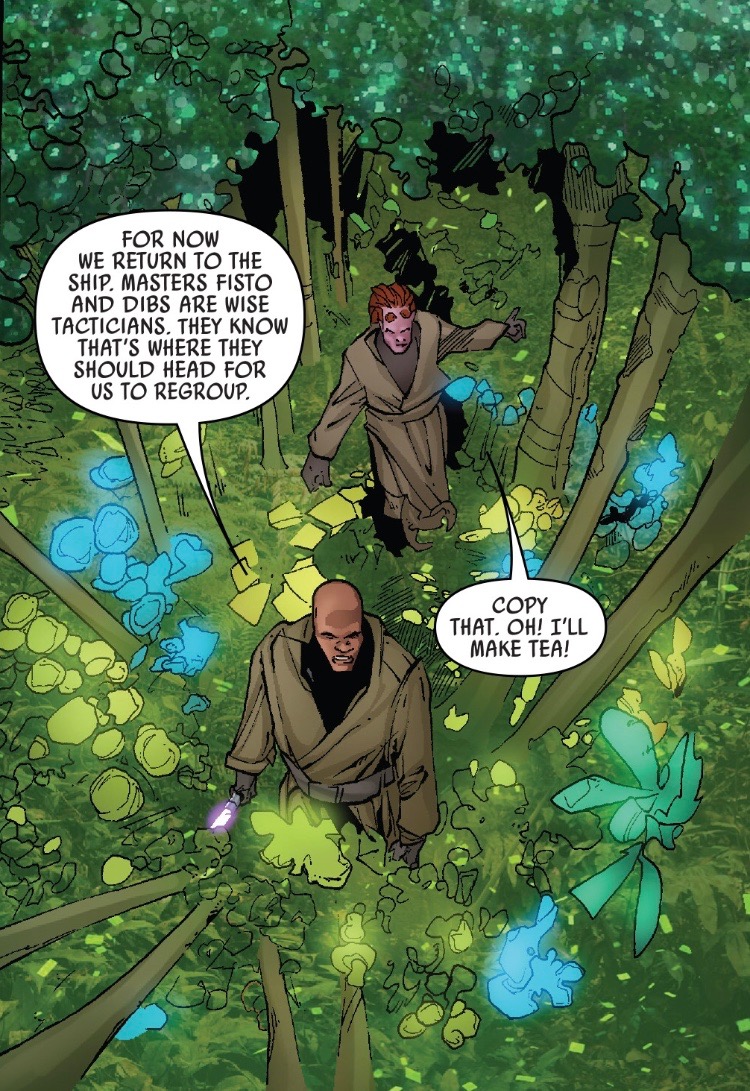 Mace and Rissa Mano are still cautiously moving throughout the trees, taking out whatever droids they encounter. When they reach a clearing they see there is a big battalion, nearly an army, of battle droids looking for them. Rissa proposes moving in, but Mace suggests caution. He knows the two of them can’t take on that many droids alone. Mace proposes to wait for Kit and Dibs to find them. Trust in the Force, or something like that. 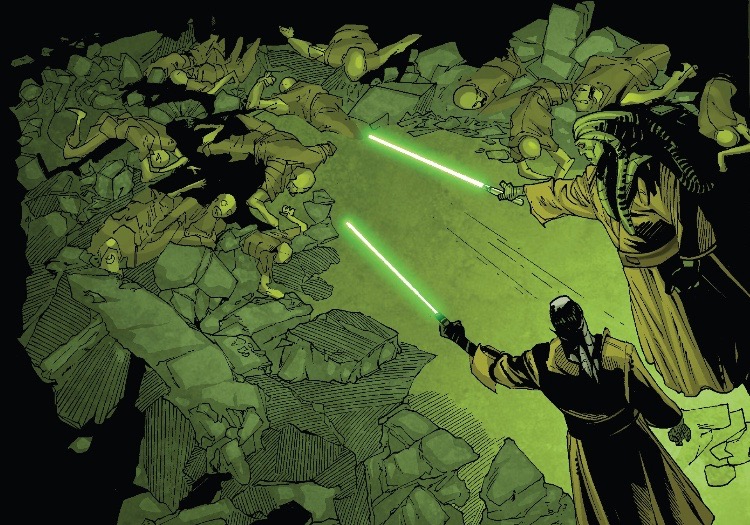 Defeating the cave monster doesn’t take long for Kit and Dibs. The real shock for them is not a monster, but the carnage they discover in the darkness. Bodies of innocent casualties strewn across the cave, reminding them both how ugly war is. This is a huge turning point for Dibs, whose frustration with the violence has reached boiling point. Dibs loses it here and unloads his anger on Kit. From his point of view, the Jedi have not protected anyone and the civilian deaths were senseless because the population shouldn’t have faced this in the first place. Dibs storms off, leaving Kit to follow. 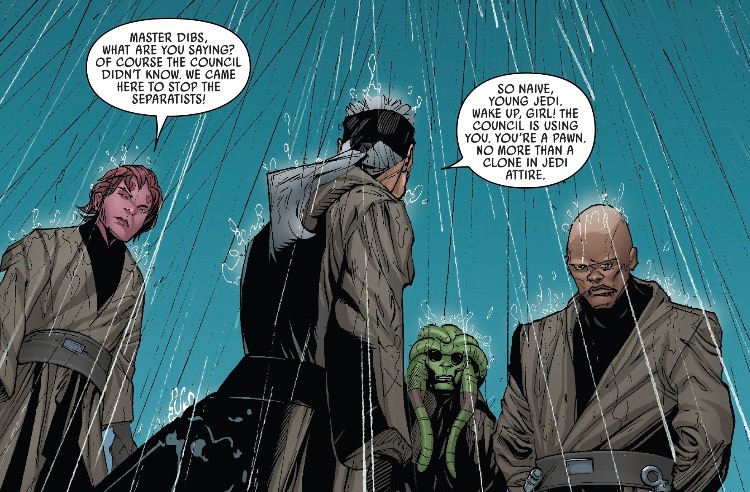 It’s no happy reunion once the Jedi meet up. Dibs is not having any of it. He’s become convinced the Jedi have somehow been corrupted by involving themselves in the Clone Wars. Knowing how this all ends, I have to say, Dibs has a point. Only problem is, he’s lost control and is now acting out of anger. We all know where that leads, and Dibs is about to walk off the deep end. Out of respect to the character, I’m not trying to make him sound like a lunatic, just a sensitive person whose anger got the best of them. 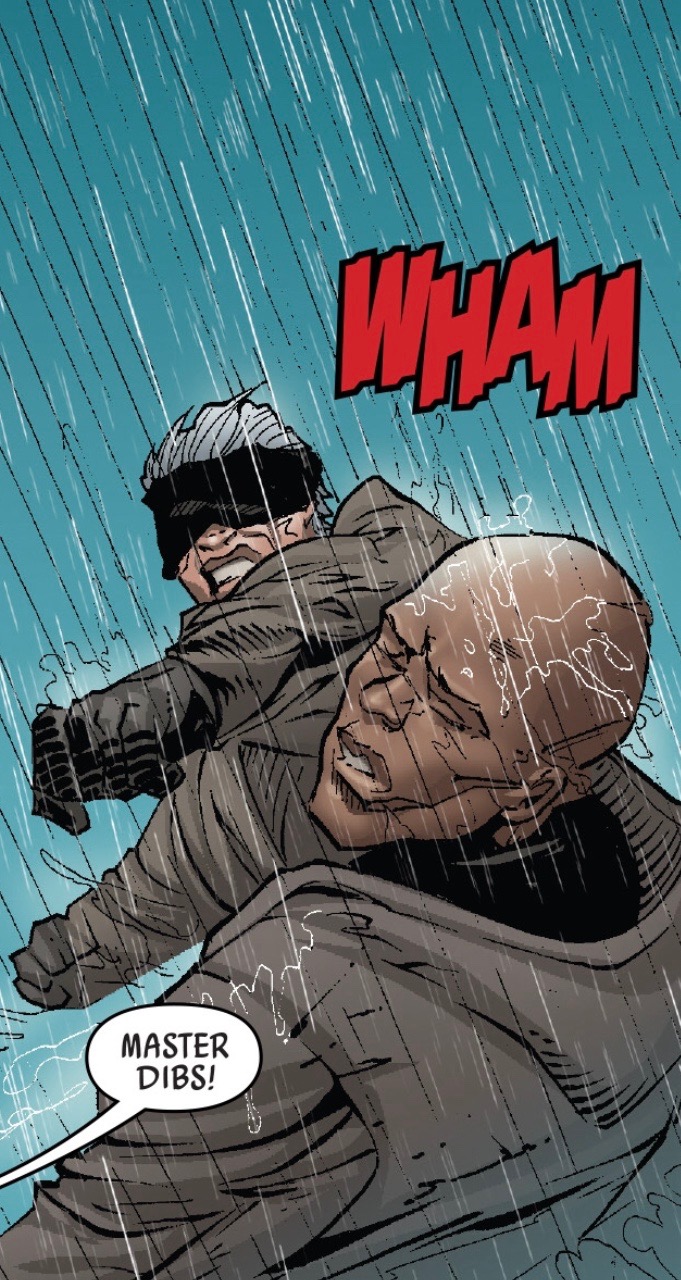 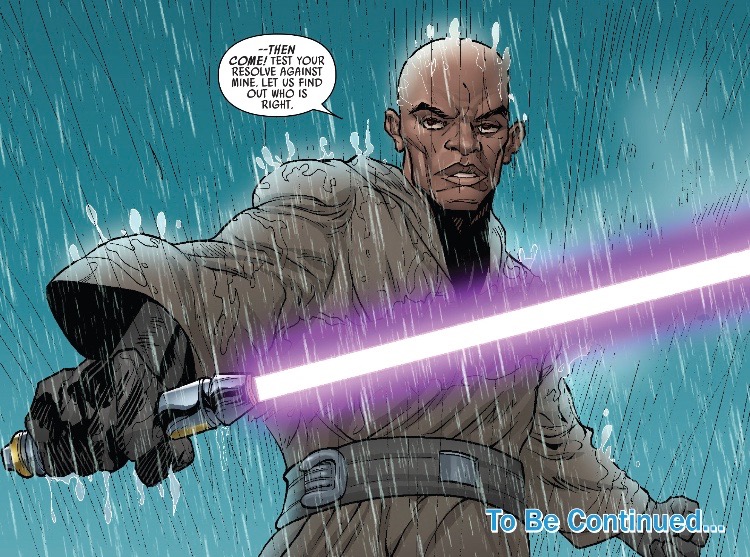 There you have it. What was a heated disagreement quickly became a dangerous fight. Honestly, I don’t think it’s a question that Dibs is no match for Mace Windu. I doubt Mace would harm or kill him unless he had no other choice, so I don’t think this is the end for Dibs. We’ve never seen this kind of inner conflict within the Jedi. The only time we’ve seen Jedi draw lightsabers on one another is when one of them had already turned to the dark side. Despite something unprecedented like this happening, it doesn’t seem to have the same weight as Anakin’s descent into evil. This seems to be misguided anger manifesting itself in aggression. Hopefully Dibs can stop himself before he gets hurt. Mace Windu is a patient person, but I wouldn’t push him. It will be interesting to see what the other Jedi do, especially if they decide to intervene.

This is my favorite issue of Mace Windu: Jedi of the Republic so far. Writer Matt Owens raised the stakes of the story in a very unpredictable and original way. As I said earlier, I loved the artwork of Kit and Dibs moving through the cave. My only big complaint is still the villain, AD-W4. If you’re going to have a droid commanding an army of droids, I have to ask: Why not just have Grievous? Though I wasn’t blown away by his first appearance in Revenge of the Sith, I think the character is intriguing, and I wouldn’t mind a little more story. Who knows? Maybe he just hasn’t shown up yet and we have that to look forward to. 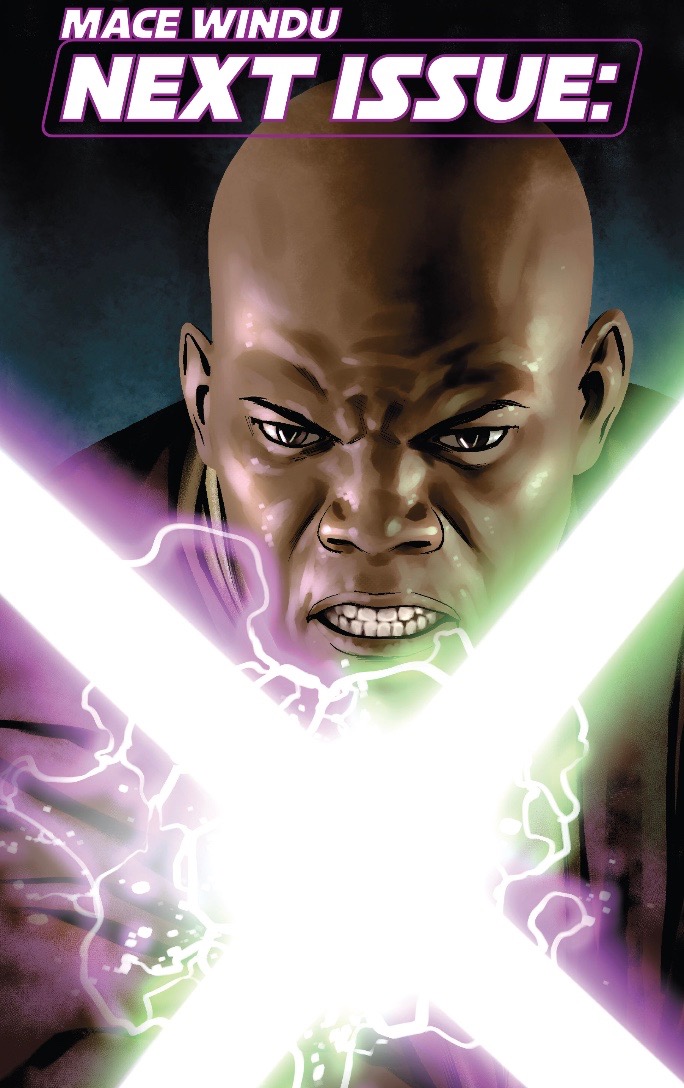