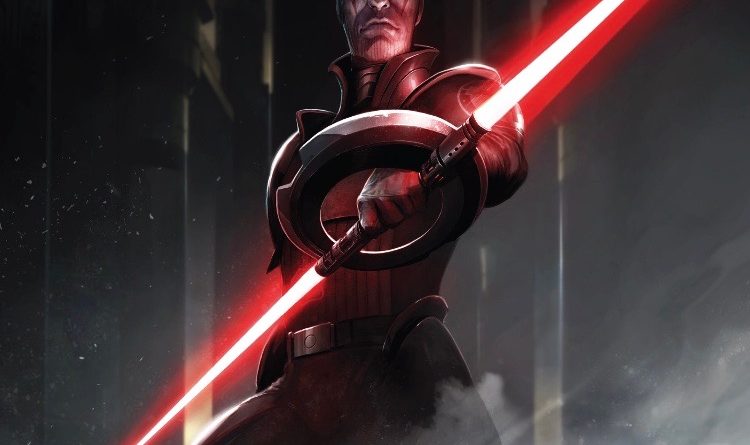 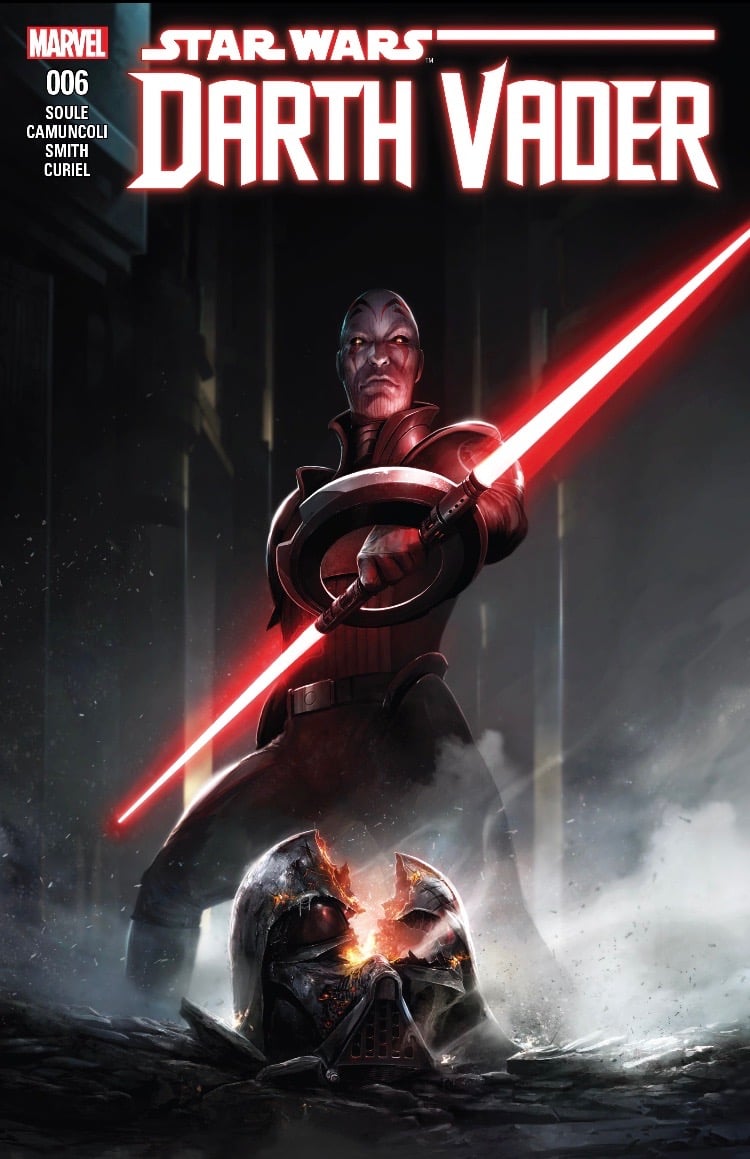 There has been a lot of bad news in our world this week. If you want to escape for a little bit to a galaxy far, far away you should look no further than Marvel’s Darth Vader #6. It’s been a while since I’ve been so floored by a single issue, but this one certainly got me. Writer Charles Soule is setting up some pretty cool stories in this series. Although this is the latter part of an arc, “The Chosen One”, you could most likely pick this up and start with little problem figuring out where Vader is. 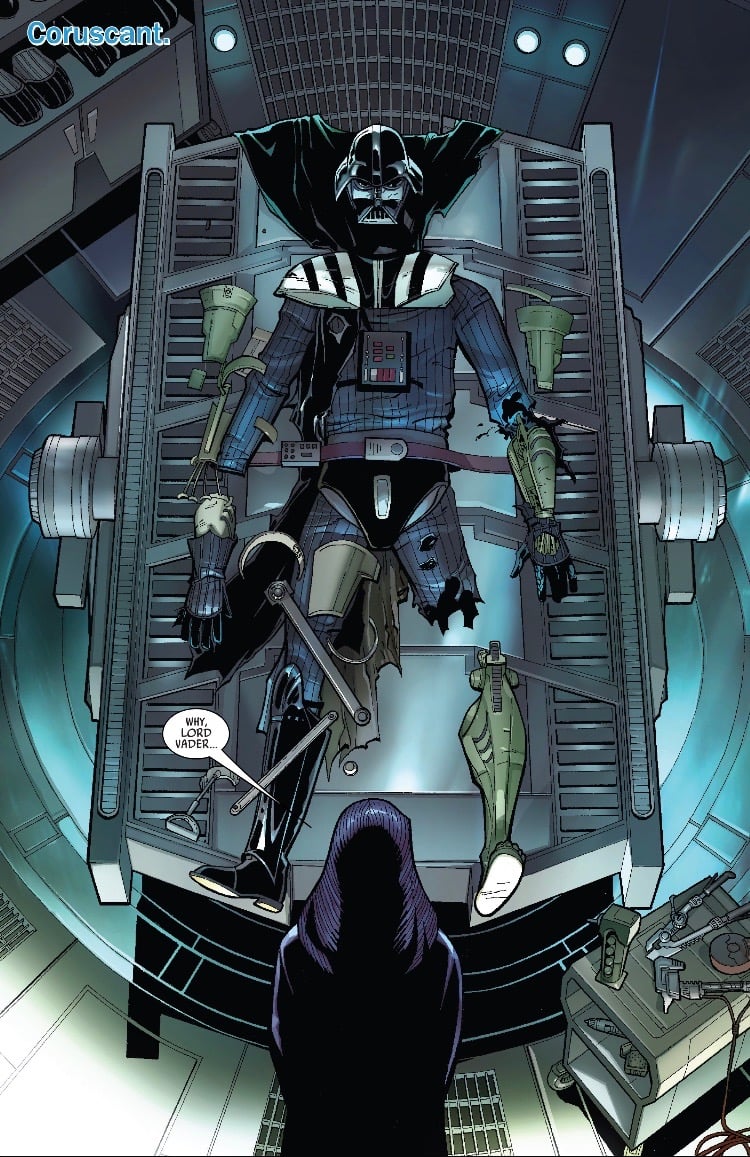 Vader was able to defeat a Jedi and forge his own crimson saber, but the conflict left the Sith Lord in tatters. The issue opens with Vader being backhandedly complimented by Palpatine on his success in obtaining a Sith lightsaber. If you are not familiar, the crimson color of a Sith lightsaber comes from the Kyber crystal (power source of a lightsaber) being harnessed and bled by a Sith Lord. Sounds pleasant, huh? The previous issues cover Vader’s quest to obtain his own. Now that he has it, Palpatine has work for him to do. 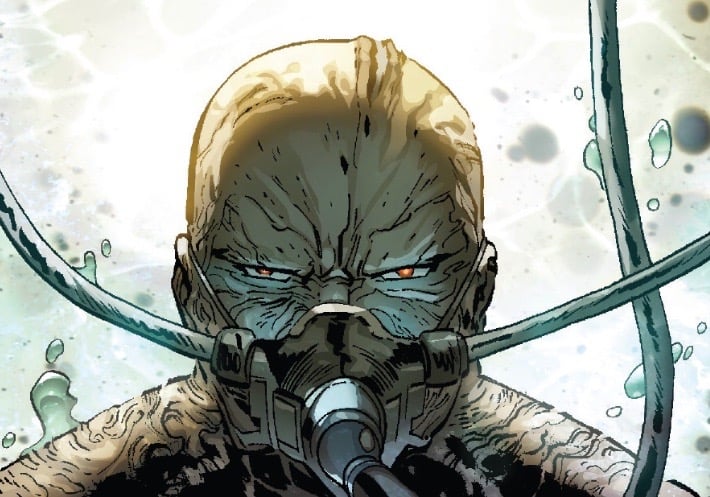 As Palpatine is familiar with the man who was once Anakin Skywalker being technically proficient, he encourages his new apprentice to repair the Vader suit himself. We don’t get a close look at whatever modifications Vader makes to his suit, but he does it all from the comfort of a Bacta tank, wielding tools with the Force. I thought this was a pretty cool thing to witness. Who knows how many versions of the iconic suit Vader’s had over the years. It will be cool to see if he continues to modify it. We also get several close looks at Vader in the Bacta tank. It was understandable that we couldn’t get right up close to him in Rogue One, so I’m happy artist Giuseppe Camuncoli gave us his interpretation, which is just as good and terrible as I imagined. 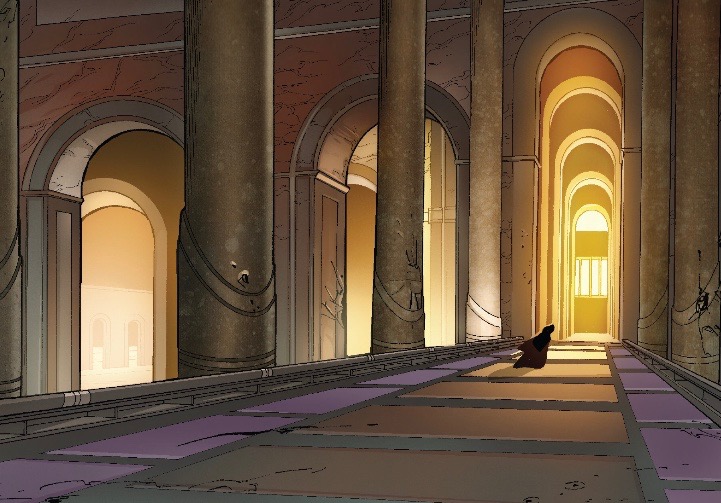 If you remember, Palpatine has made himself right at home in the Jedi Temple. We get a good look at several familiar parts of the Temple and it doesn’t look like old Sheev bothered much with redecorating. In this frame, an intruder is making their way through the temple and Palpatine has called on Darth Vader to deal with the situation. Knowing what happened in the Jedi Temple not too long from where we see it in this issue gives it a haunting appearance. Again, artist Giuseppe Camuncoli does not skimp on detail, but these vast spaces are almost completely empty, when we are accustomed to seeing them filled with Jedi Masters and Padawans. Very macabre, in my opinion. 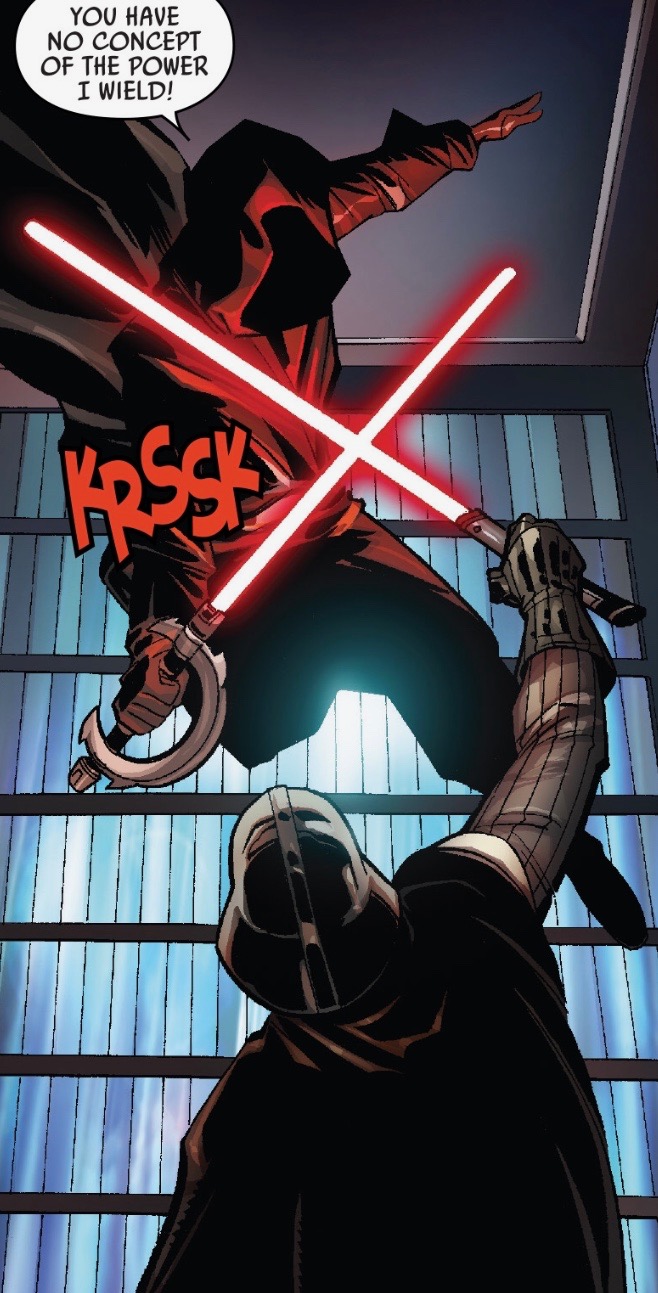 The intruder makes their way to the Jedi Archives, and from my impression, the knowledge stored in the archives is what they are after. They’re not after the Emperor or some sort of bounty…just knowledge. Vader arrives to put an end to it, but we see the intruder has a crimson blade of their own.

So cool! We learn the identity of the intruder, the Pau’an male who will eventually become the Grand Inquisitor that gave the Ghost crew so much trouble in season one of Rebels. We don’t know much about the man who will become the Grand Inquisitor, other than he was once a Jedi and a guard of the Jedi Temple. Somewhere between the end of the Clone Wars and here he made the acquaintance of Darth Sidious, who must have promised him access to the archives, and here we are. Maybe we’ll get the story of how he got his crimson blade someday, too. 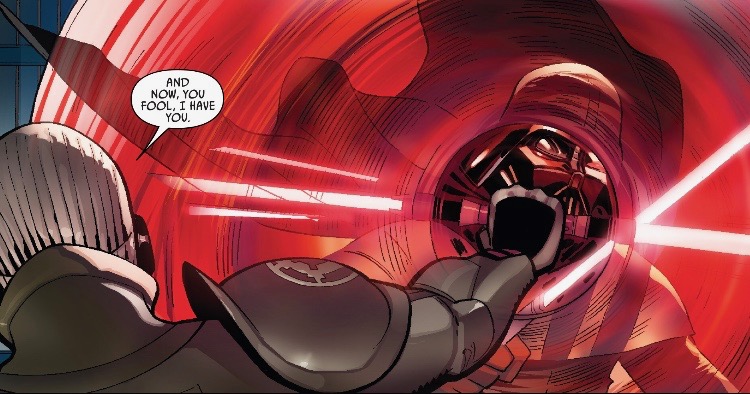 For a second, it looks like the Pau’an has the upper hand, especially once he equips the double-bladed, windmill function of his lightsaber. That’s a neat trick, but against Darth Vader, one needs a little bit more than a twirling blade. Just as the Pau’an is about to finish it, Vader lets him know that the only reason he let him get any sort of advantage was so he could test his new suit. Even Grand Inquisitors have their “Oh Poodoo” moments. 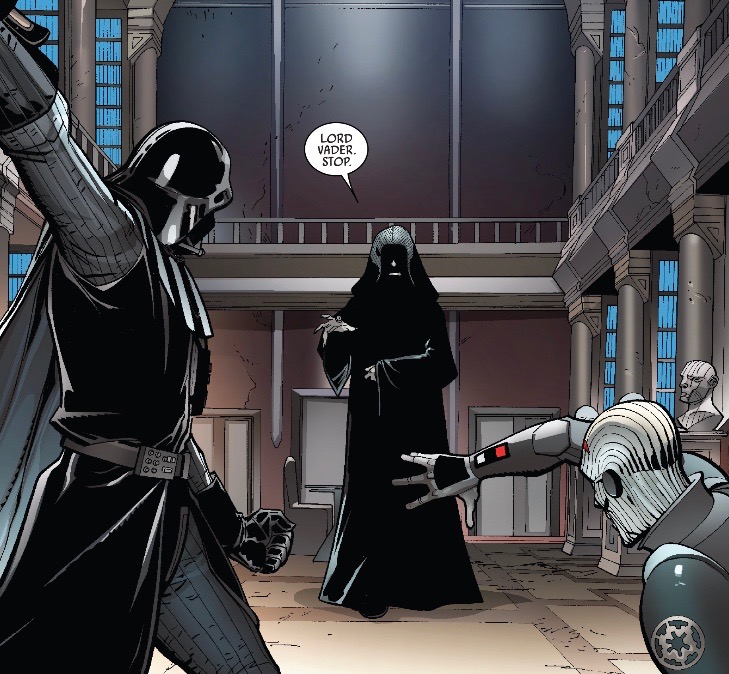 Vader isn’t messing around. He doesn’t care who this person is or what they are doing. He’s simply pissed that this Pau’an would dare enter and challenge him, and he’s ready to be done with him. As the newly christened Sith saber is about to end any road the Pau’an would take to Grand Inquisitor, Palpatine shows up to let everyone know what’s REALLY going on. 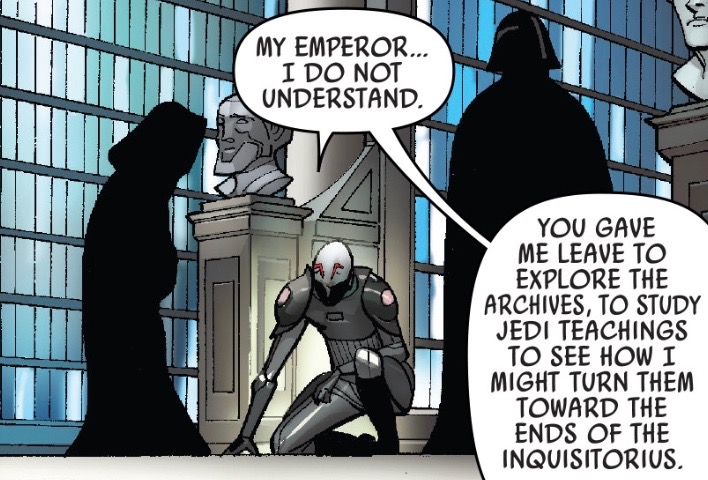 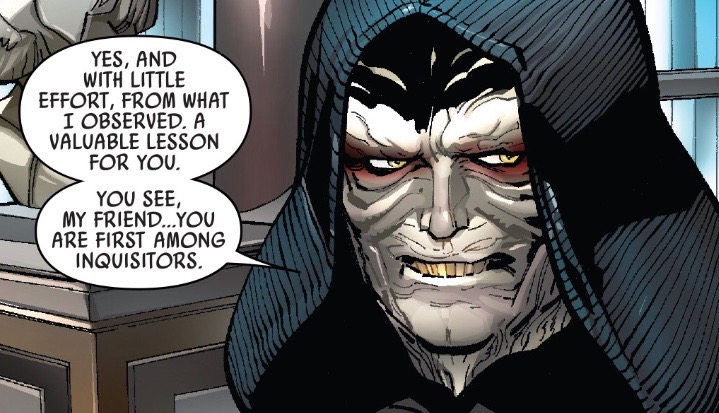 Well, we learn a lot in a few frames, that the Pau’an has already been granted the rank of Grand Inquisitor, as he was the first of a program Palpatine put together called the Inquisitorius. Vader knew nothing about this, but Palpatine is about to pull back the curtain on what he considers his final nail in the coffin of the Jedi. 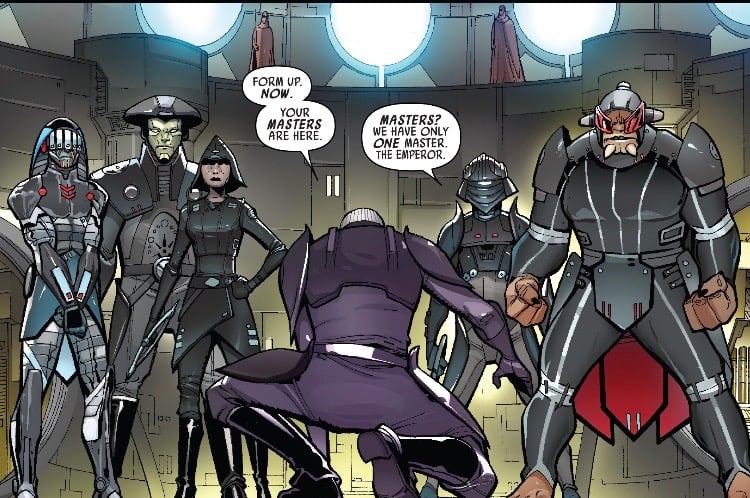 Palpatine introduces Vader and the Grand Inquisitor to their new pupils. Palpatine refers to these Inquisitors-in-training as those who were once “slaves to the Light Side”. Now, they work for the Dark Side, and they are the frontlines of what will be the hunt for the remaining Jedi. I recognize a few of them, as I’m sure you do too. I can’t wait to see them in action. I hope we learn all of their stories and what brought them into the service of the Sith. 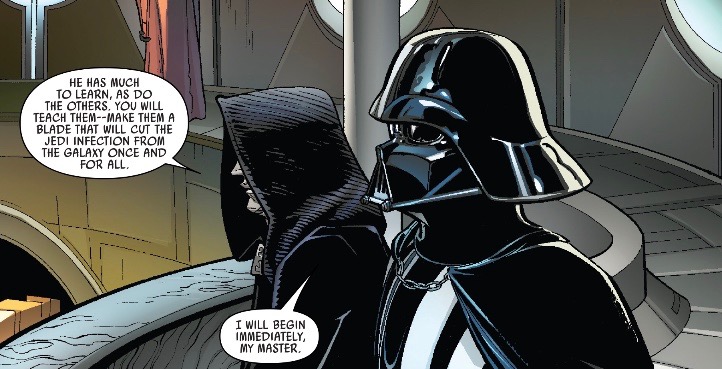 Looks like the Inquisitors are going to have quite the headmaster in Darth Vader. I can’t wait!

Charles Soule is among those writers in this new crop of canonical Star Wars storytelling that can seemingly do no wrong, in my opinion. I’m over the moon that Marvel gave him this series, and he seems to be to, as he is running with it in full-sprint. As I mentioned at the beginning, you could start with this issue if you’ve missed the previous ones (though I’d encourage you to go pick them up, because they’re great as well). The art by Giuseppe Camuncoli, inker Cam Smith, and colorist David Curiel is perfectly raw and grim for the tone. I highly recommend this issue, as well as jumping aboard Marvel’s Darth Vader if you have not. 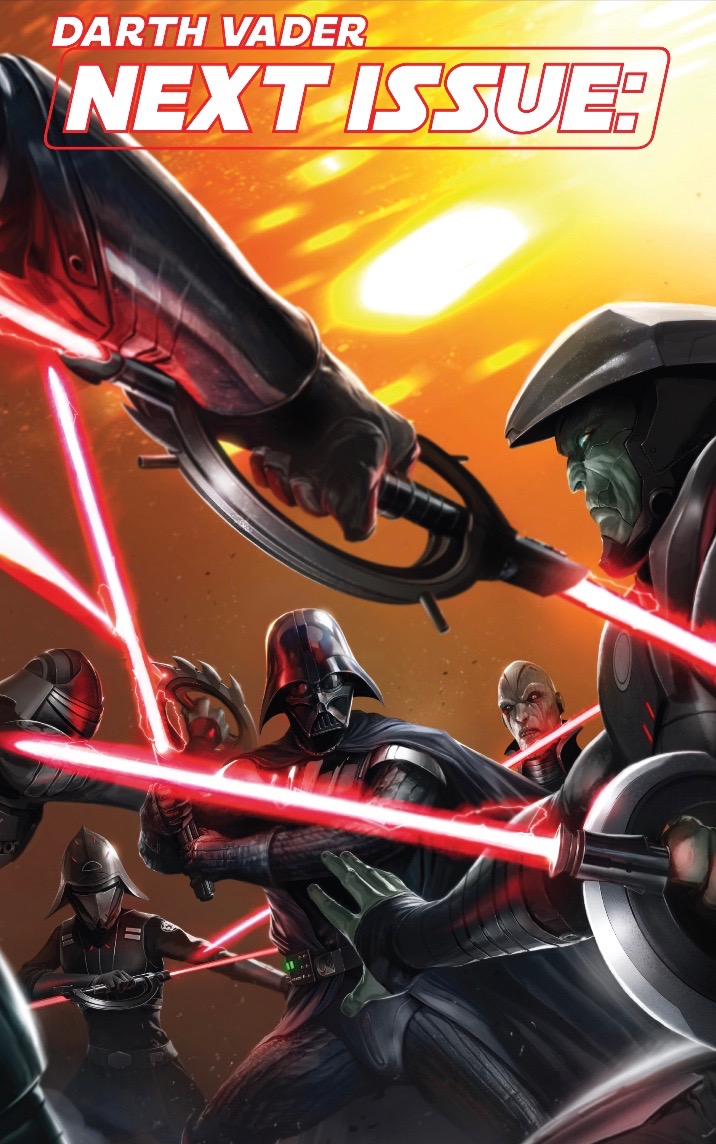 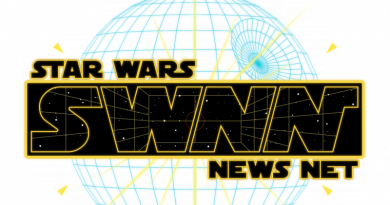 Updated with the Winners! Happy 5th Birthday SWNN! Help Us Improve the Site and Win 1 of 15 Awesome Star Wars Prizes! 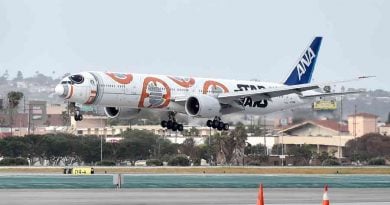 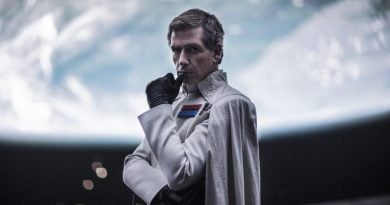