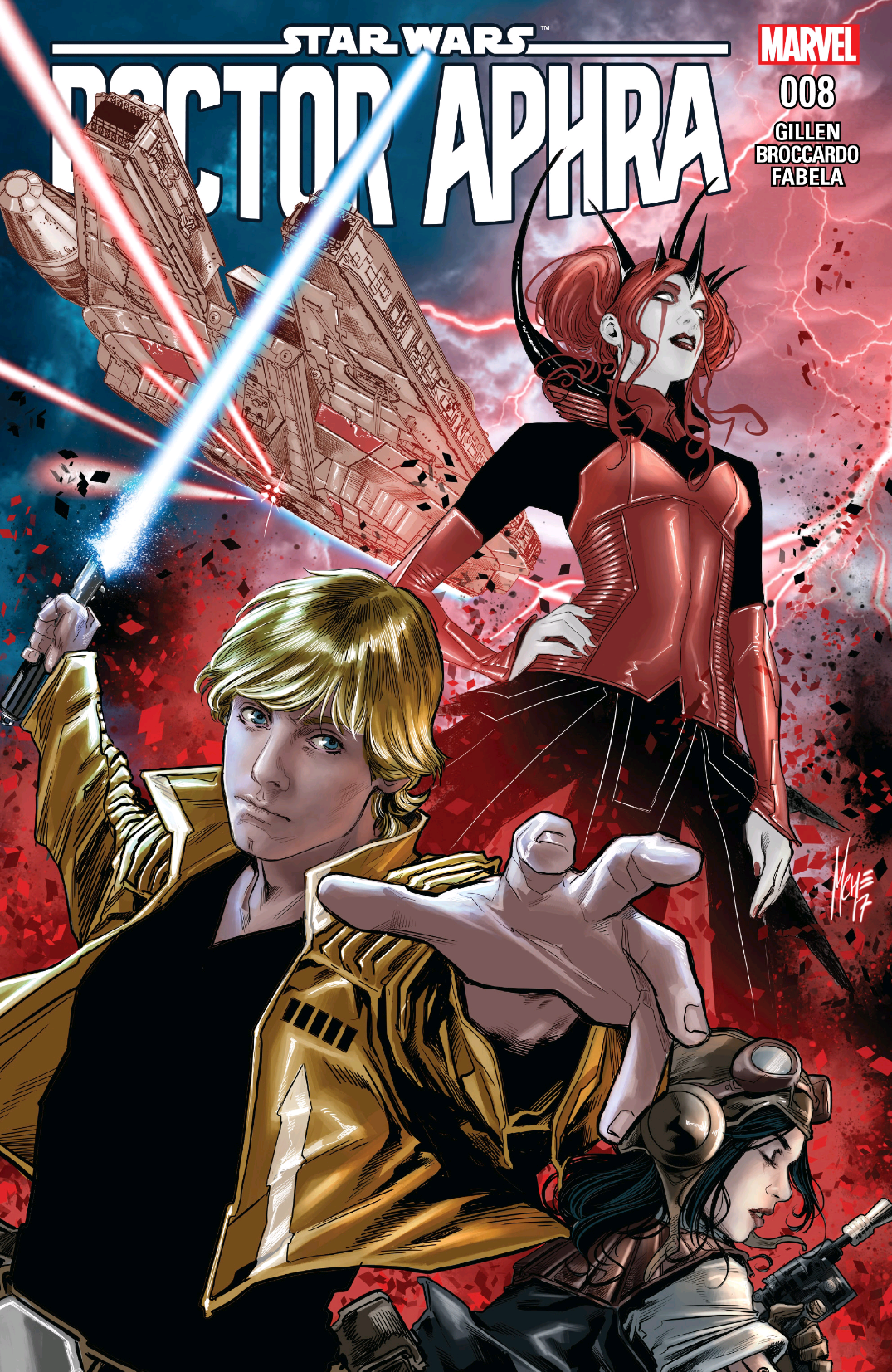 This week marks the end of the 5-part horrorfest crossover with the ongoing Star Wars and Doctor Aphra series from writers Jason Aaron and Kieron Gillen respectively. “The Screaming Citadel” arc comes to a close with Star Wars: Doctor Aphra #8 as Gillen puts an untidy bow on the storyline accompanied once again by artist Andrea Boccardo. Spoilers ahead… 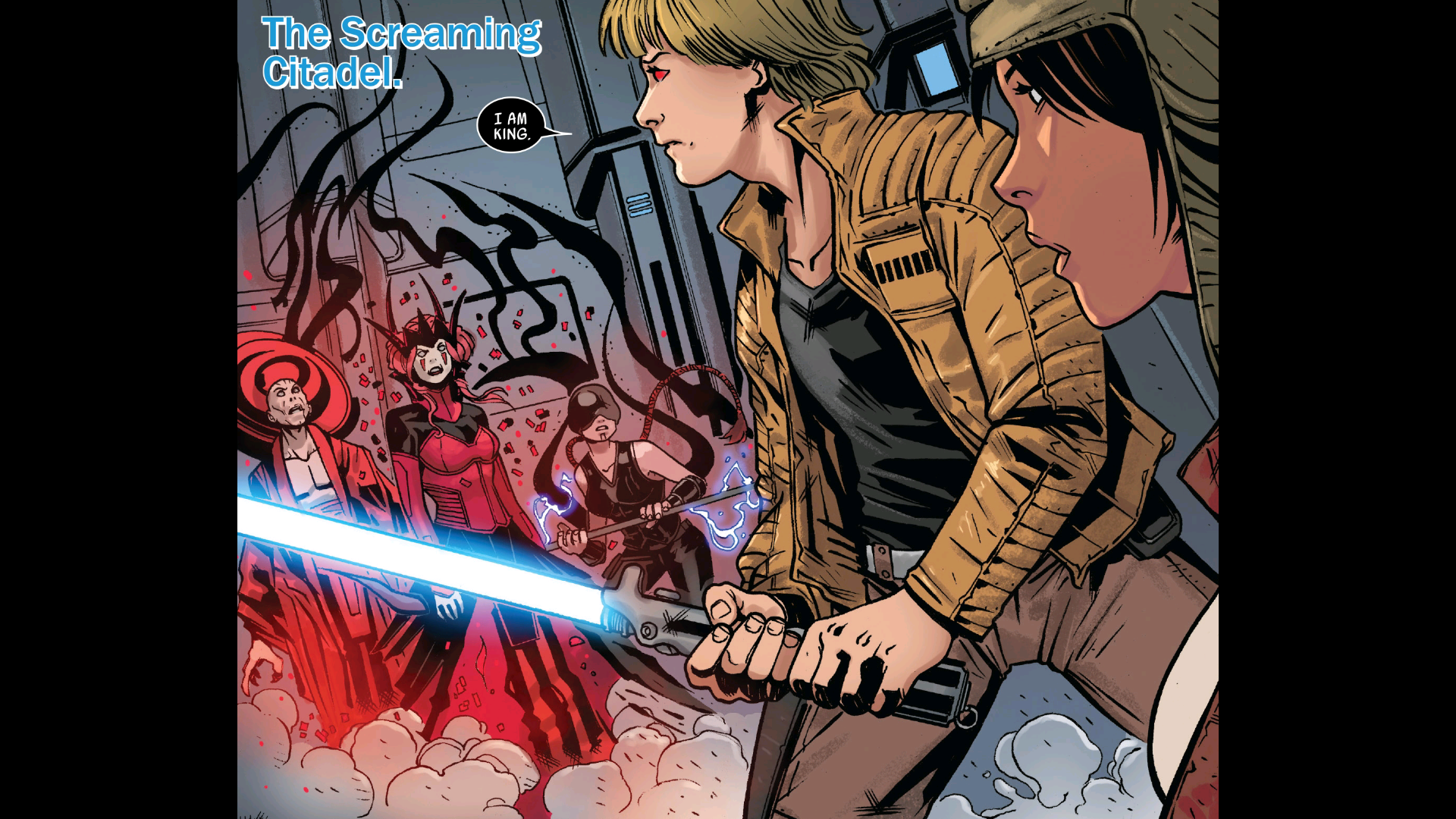 This issue picks up immediately after the events of Star Wars #32 wherein the Queen of Ktath’atn infected Luke Skywalker and Han Solo with a symbiote parasite. As Han turned on his rebel friends, Luke, empowered by the symbiote declared his dominance as King over the vampiric Queen. 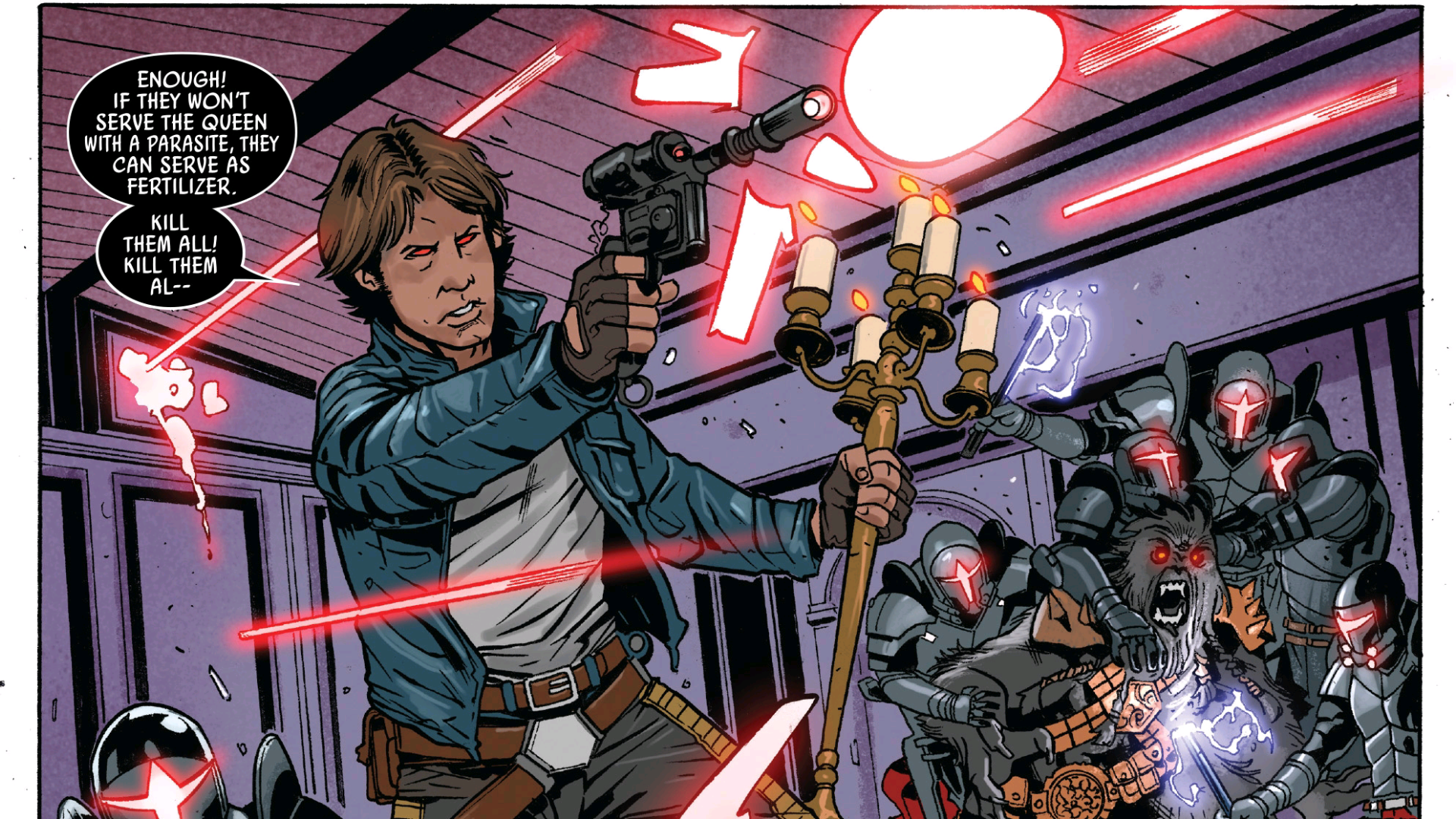 As Luke fights the Queen, Aphra slips him a winning hand when she activates the crystal of Rur (a crystal that houses the conscience of an ancient Jedi) and Rur begins to instruct  Luke about how to master his parasite. However, after realizing the ancient Jedi is only a Jedi in knowledge, not in practice, he decides to do things his way – allowing the parasite to be killed telepathically by the Queen. 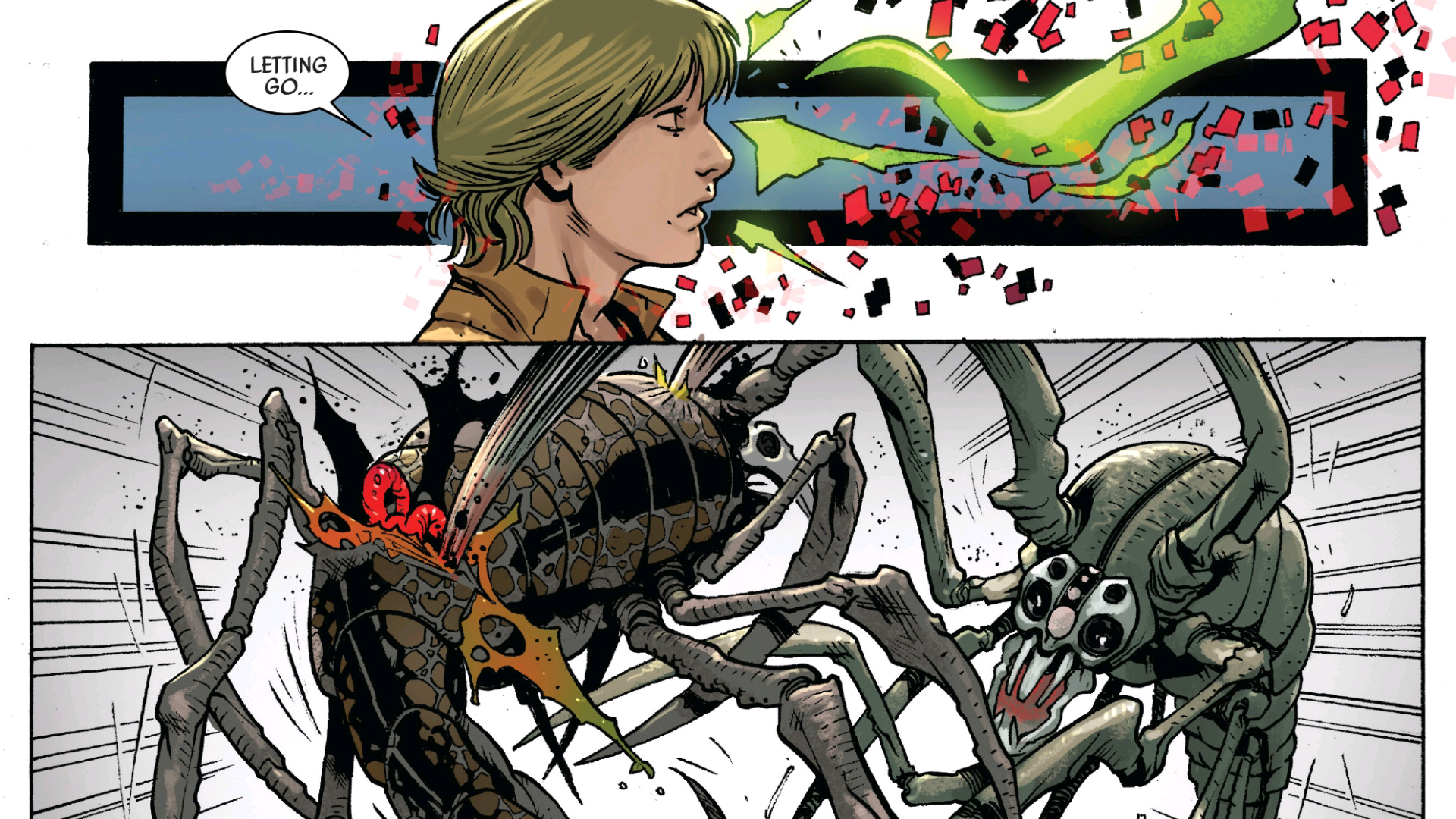 Meanwhile, Han fights against his parasite and realizes that he has not completely lost control of his actions. When Luke kills the Queen, her control over the populace of her kingdom evaporates and Han becomes the de facto King until he uses his newfound authority to declare the people free for good. 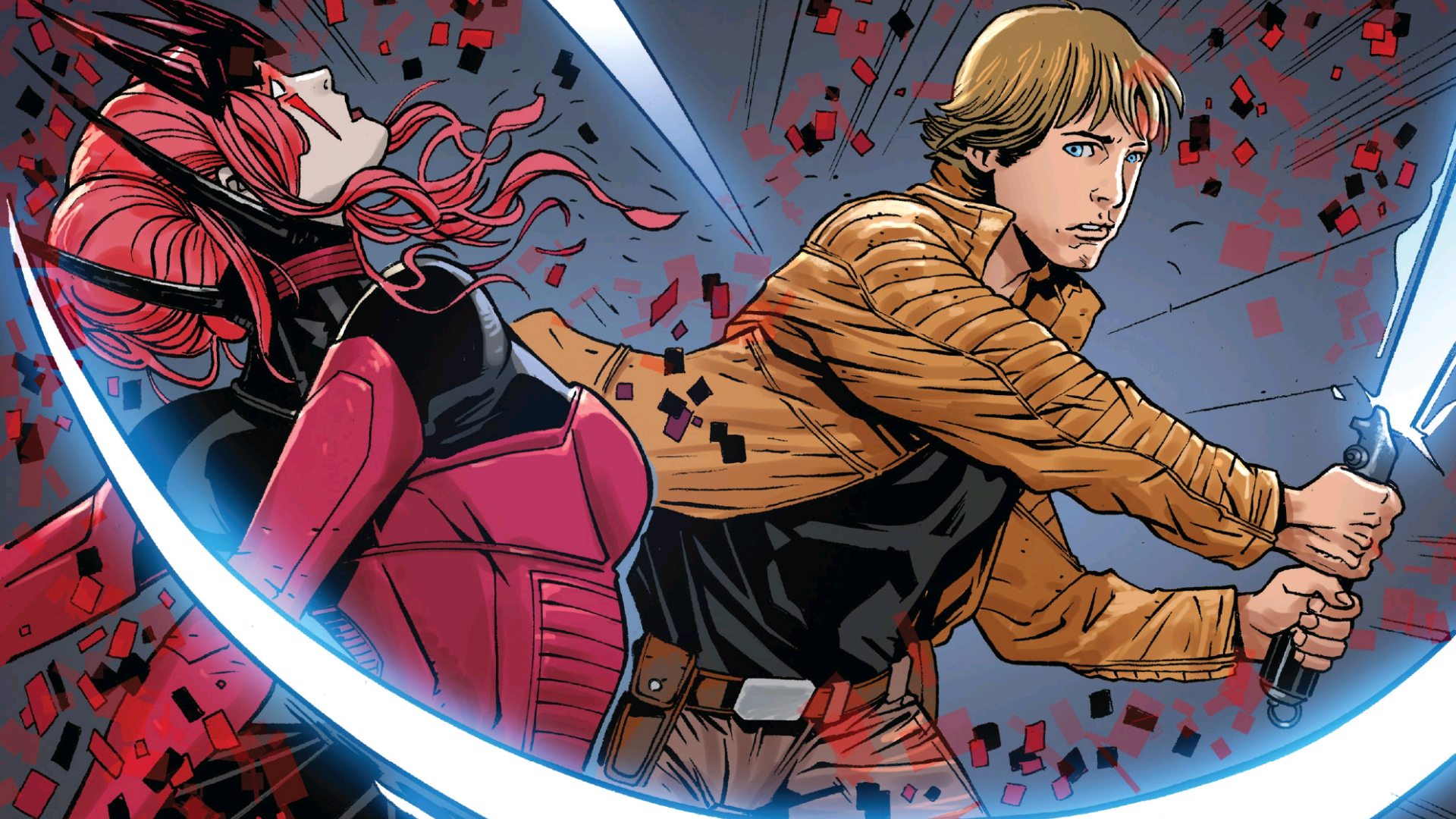 Despite Aphra’s return to help the rebels in their fight against the Queen, she doesn’t find forgiveness from everyone. Surprisingly, Sana manages to forgive Aphra (whom she obviously still has feelings for), but Luke on the other hand, goes the other way. 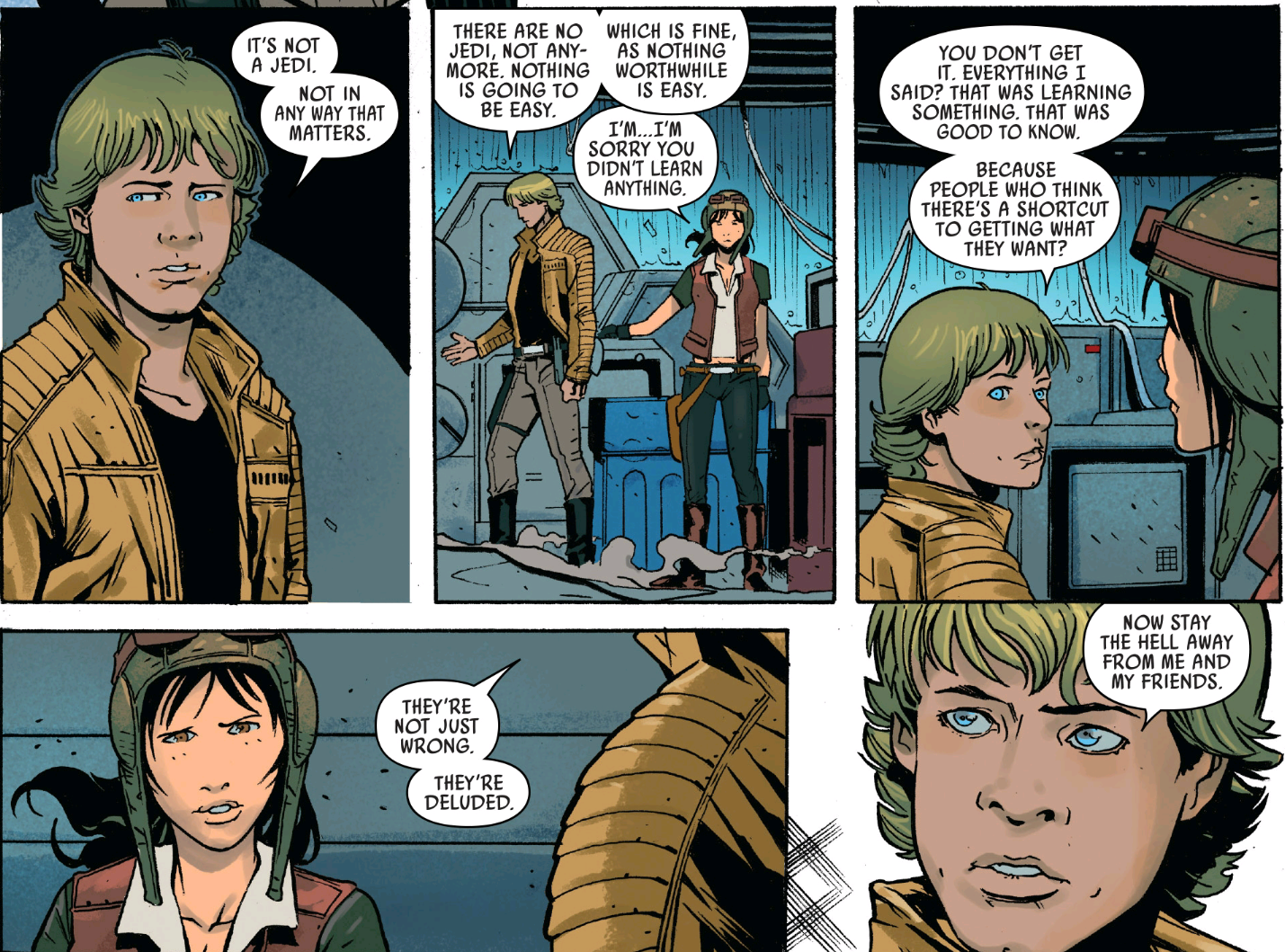 The eternally patient and mistakenly naïve Jedi has reached his limit with the archaeologist, instructing her to “stay the hell away” from him and his friends. I enjoyed seeing this side of Luke. Hidden within the craziness of this issue is what I believe to be a serious milestone for his character. This is the moment where he leaves the farm boy behind and becomes the warrior he was destined to be. Obviously, he still has much to learn, but I believe this was a significant moment in the young Jedi’s life. 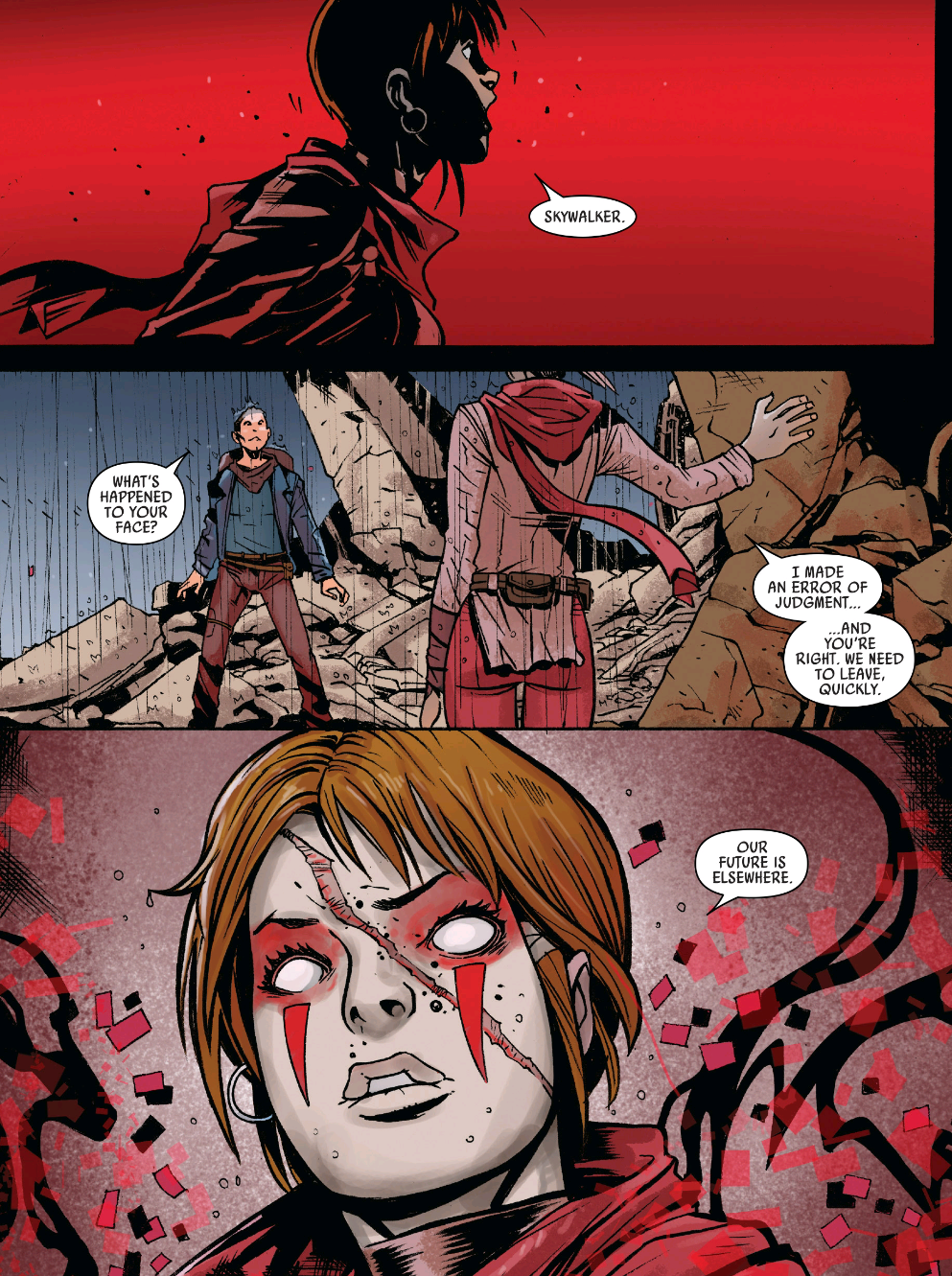 Of course, no horror story would be complete without that “it’s not over yet” ending, and this story is no exception. The Queen’s body may have been slain, but the parasite survived and manages to infect another at the end of the issue, setting off with a personal vendetta against Skywalker. Needless to say, this is probably not the last we’ll see of her. 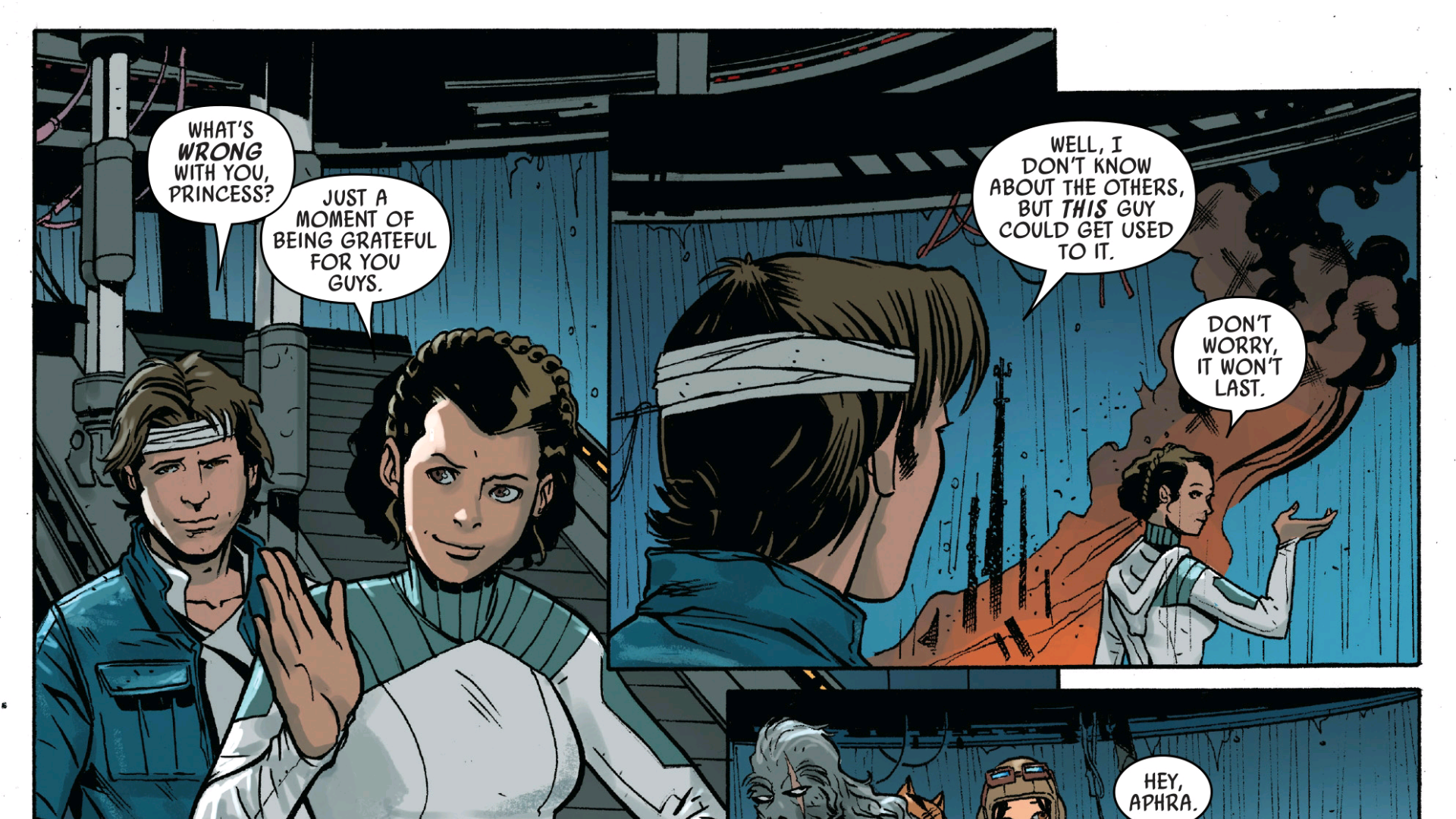 I wish I could say that I loved this storyline, but I have to say that would be a little bit of hyperbole. While I enjoyed it for what it was, in the end, it feels like one of the most disconnected of all the Star Wars canon stories so far – almost like it doesn’t really belong in the universe. I like that they went after a specific genre here – and they definitely got some of the best talent in the business to work on it (I’m a big fan of both Aaron and Gillen myself) – but I feel like the payoff wasn’t nearly as satisfying as it needed to be to justify the decision to move forward with this story. 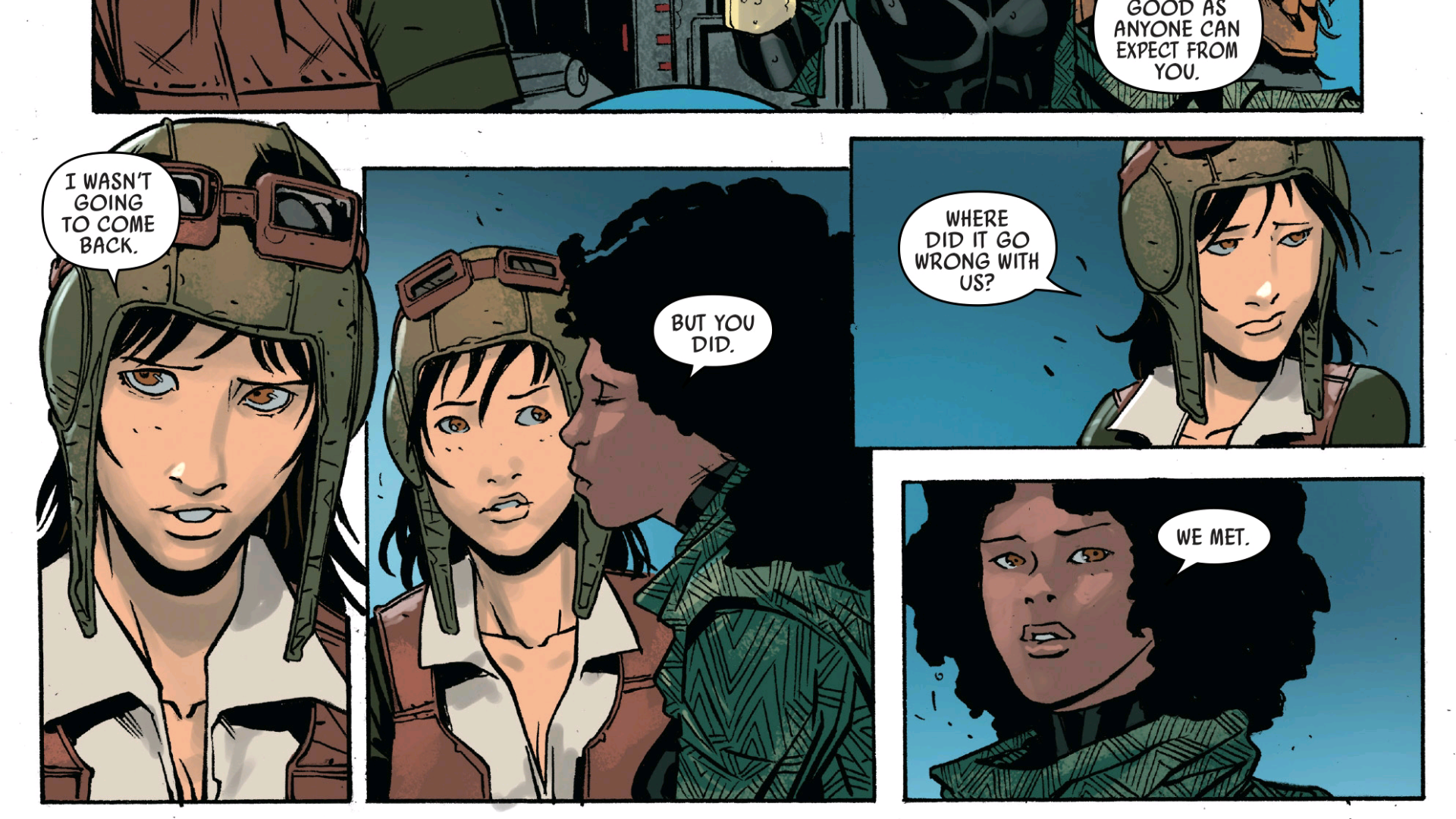 For one, this issue in particular felt rushed and untidy. I felt like Gillen was just trying his best to tie off all the threads in the 20 pages he had to work with, but it just wasn’t enough. However, I’m not sure I really would have wanted it to be stretched out any further either. 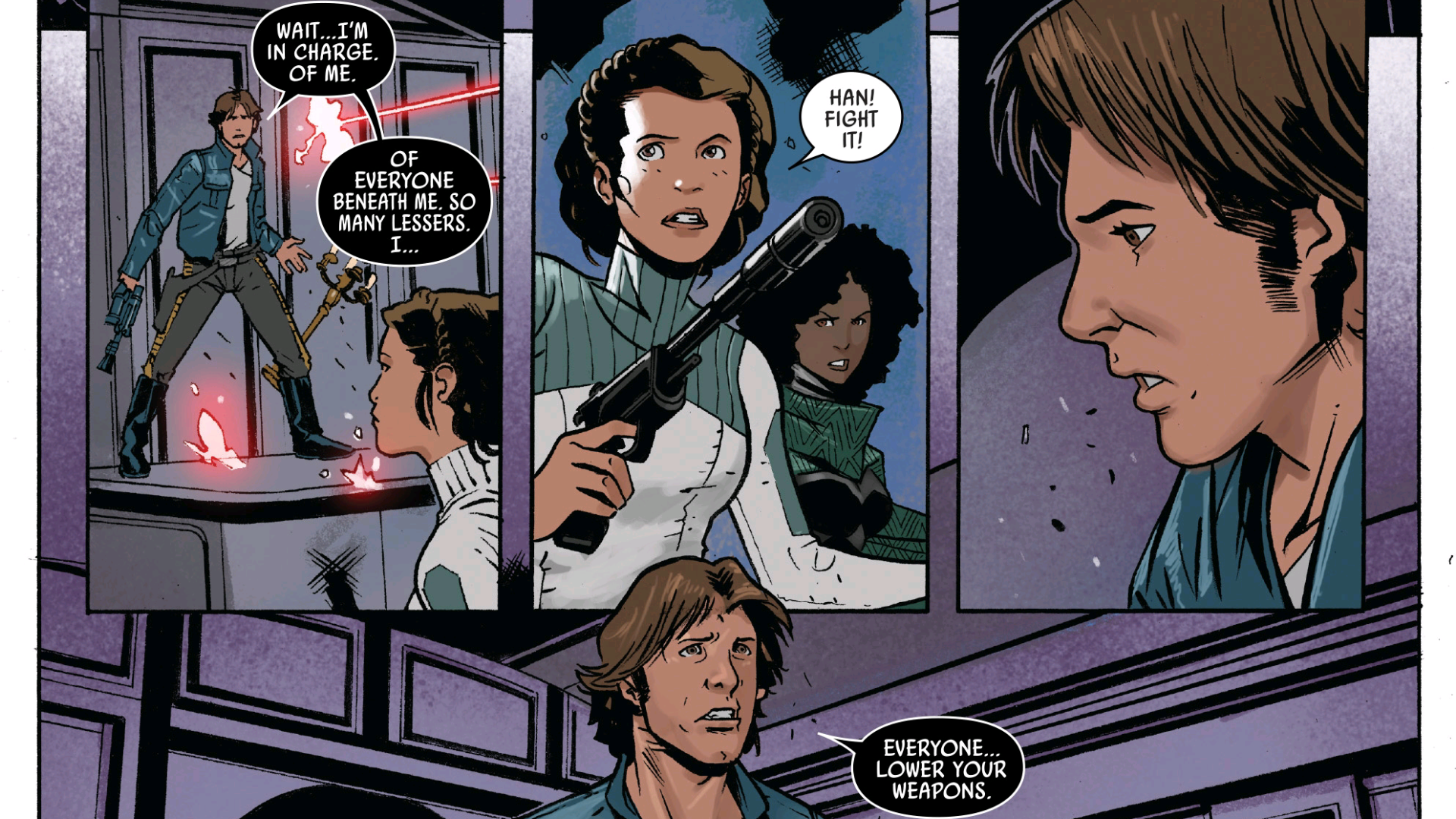 There were some plot points that I was confused by as well with this issue. How was Han able to gain control over his parasite so easily? Why did Luke kill the Queen without question when he could have tried to use the Force to control her parasite as well and possibly even save her life? Given what happens at the end, it’s clear that the Queen may have at one time been an innocent woman before being infected by the symbiote. 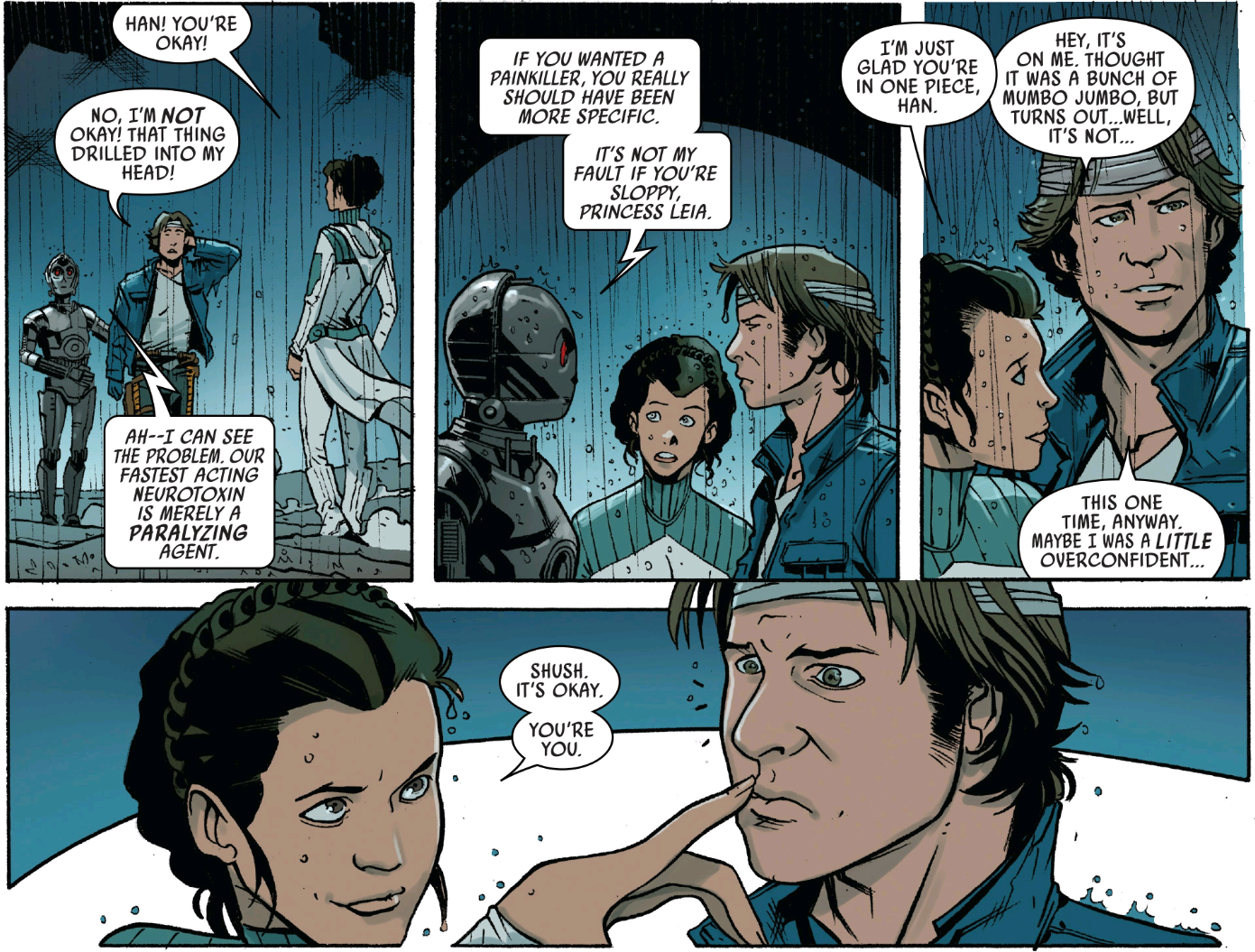 I just felt like most of the characters in this whole story arc (except for Aphra) were written out of character. It felt like an elseworld story – an alternate reality where we have the same characters, but everything is different. 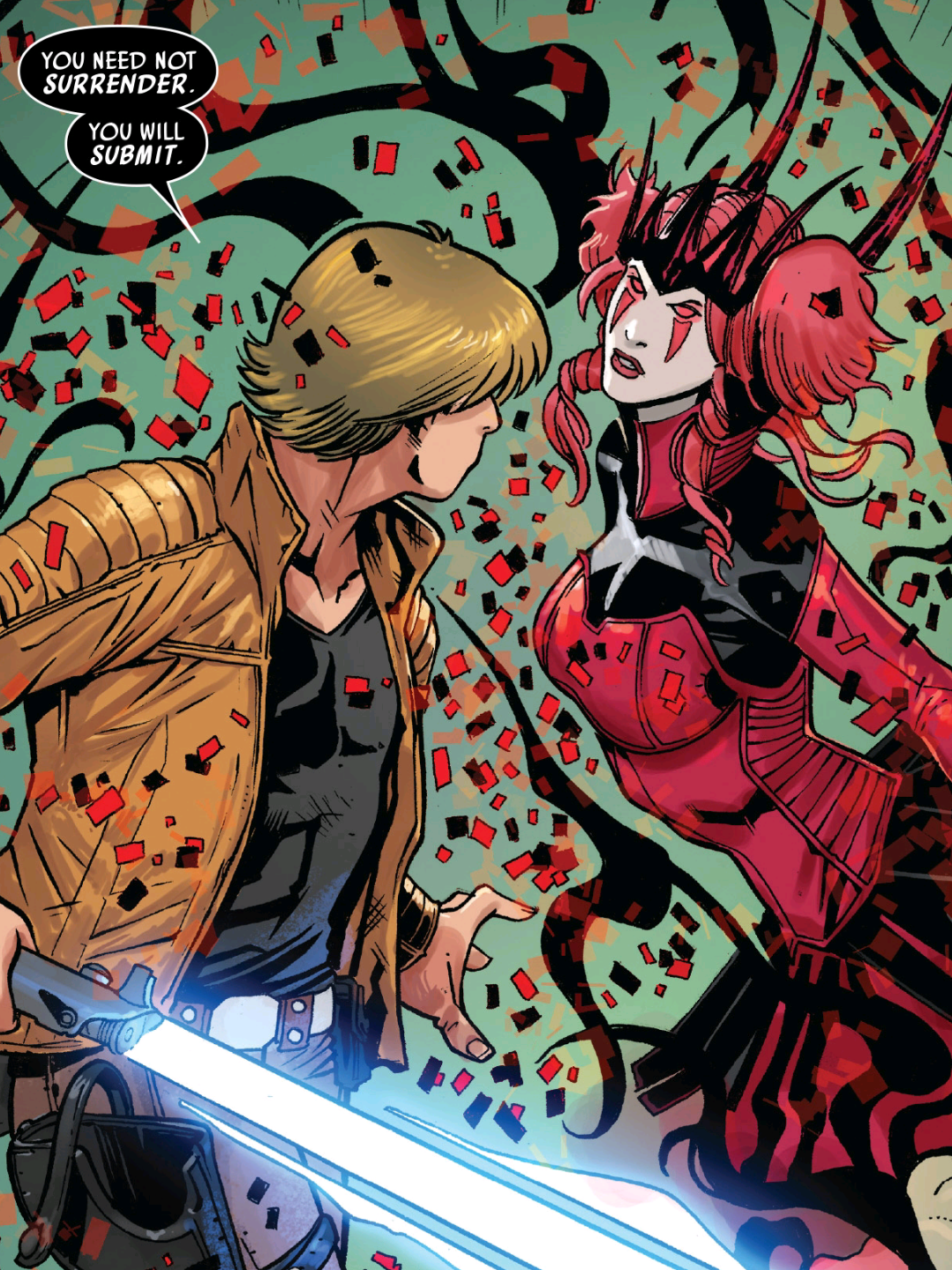 If you’ve been following this story, I still recommend you pick up this issue so you can get the finale, but otherwise, don’t go rushing to the comic shop to pick up all the back issues of this crossover if you haven’t already been following it at this point. That being said, this issue can be found at your local comic shop today or online at Comixology.

On a positive note, I have mostly enjoyed Aaron’s and Gillen’s work in the Star Wars universe as they have tackled different series on their own apart from this crossover, and I am still looking forward to where we go from here. The cover of the next issue in Gillen’s Doctor Aphra definitely has me intrigued… 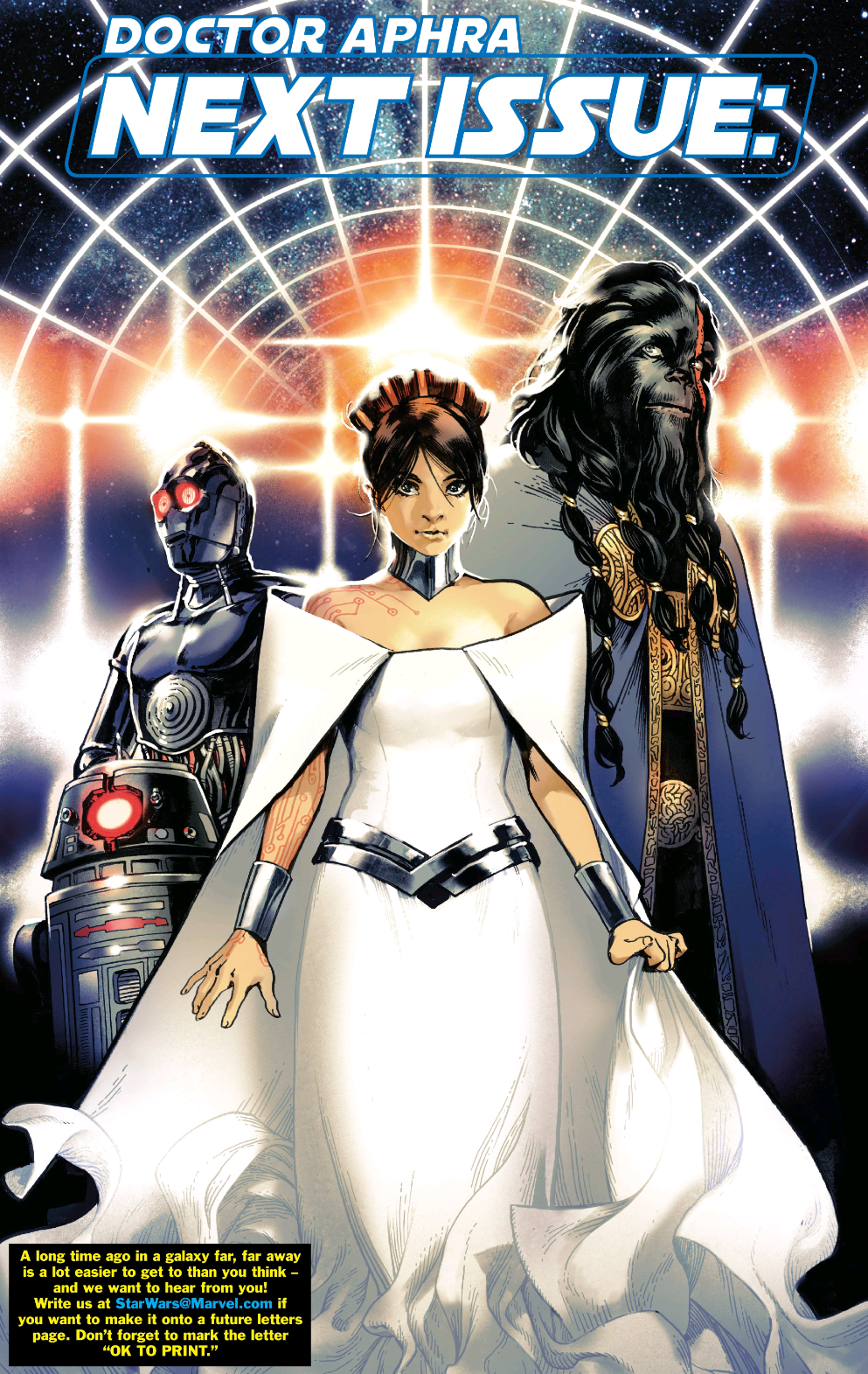