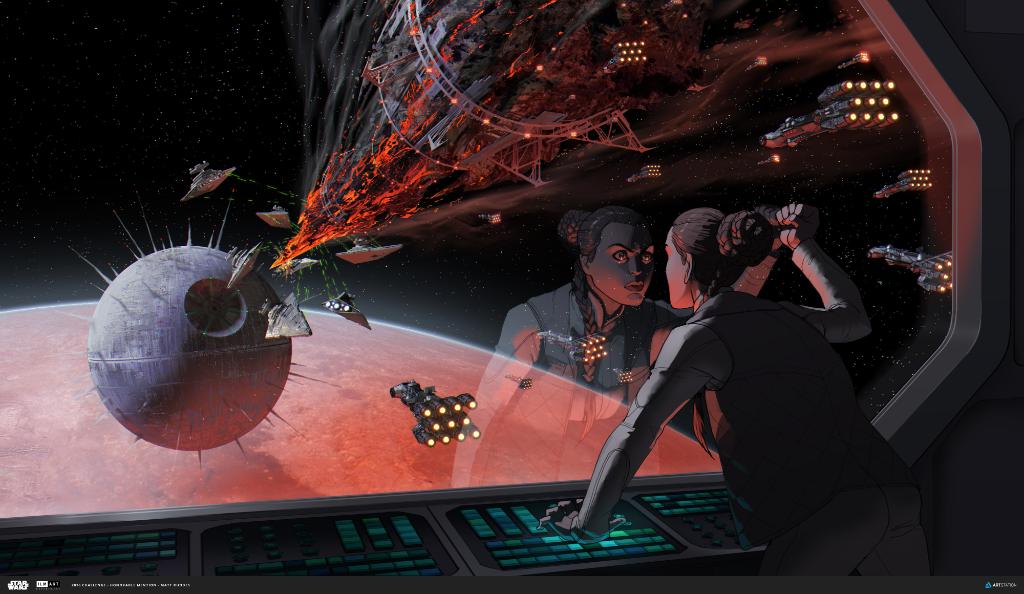 Del Rey reveals the cover of the Rogue One novelization, Topps cards share the name of the mysterious female X-Wing pilot, Pablo Hidalgo answers many questions about the Kyber Crystals and more…

This week we start with Del Rey’s official reveal of the cover for the Rogue One novelization, written by Alexander Freed:

As it was with The Force Awakens, the book uses the official movie poster for its cover.

We’re almost there. Stay tuned for our review of Catalyst in 4 days!

An interesting discovery made by our friends at Prensa Imperial from the latest Rogue One international trailer :

You probably remember this article we posted back in 2015. It was showing a tiny statuette in Anakin’s home from The Phantom Menace that greatly resembled Maz Kanata. Now StarWars.com officially addressed that curious fact:

A few weeks ago several Topps cards have been revealed with characters from Rogue One. One of the cards featured a blond female X-Wing pilot, whose name was not shown. Many fans speculated that because of the visual similarities she could be Evaan Verlaine, who was first introduced by the Leai comic book. Now Topps revealed the name of the character putting an end to that theory: 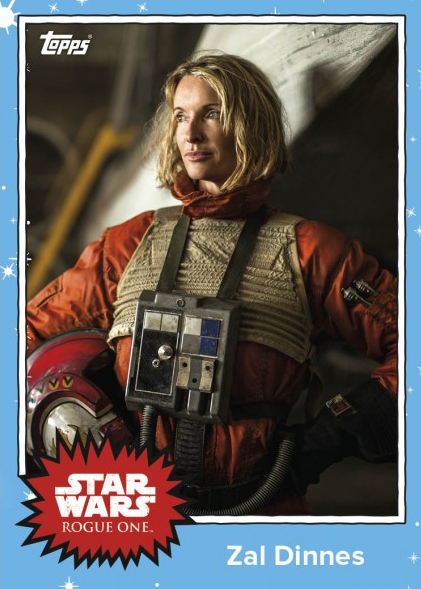 That’s one way to take out a Death Star. Art for the @ILMVFX Challenge by Matt Rhodes. pic.twitter.com/nSCLQOuQ9o

This week on The Star Wars After Show; Andi Gutierrez sits down with Lucasfilm employees and Star Wars Fans Justin Bolger, Mike Jutan, and Lucas O. Seastrom to talk about how much we love K2-SO, the new Rogue One TV Spot, Star Wars wax figures and more!

Interview with Mark Hamill at 10th Annual Comedy Celebration. He briefly touches on his beard:

@Mrsmightyduck I hear JJ says something about this on the new commentary.

@bhower1138 Yeah, I thin so. It was sent to Dark Horse for them to illustrate Son of Dathomir.

@Jakoobi_o2 Yavin is over 300 times more massive than Yavin 4. It may not have been able to.

@KarlAnderson_ The star is Hoth. Hoth the planet is actually Hoth VI, but no one calls it that.

@cmbacon78 No. Just an interrogation room he’s used before. His Vader sulking room is aboard the Finalizer.

And now some huge info dump on Kyber Crystals:

@ReyaShankar Unknown. In fact, Ahsoka was very surprised when it happened.

@primagrine The crystal takes on a color when a Jedi achieves a bond with “his/her” kyber. No one knows what the colors signify.

@NotWillWest Ahsoka was surprised to discover that the crystal changed color when she rebuilt that saber. That was unprecedented.

@DannyDsWorld when a Sith builds a lightsaber, it can only ever be red.

@kevinlindert They can find it the way anyone can. Digging them out of the ground. 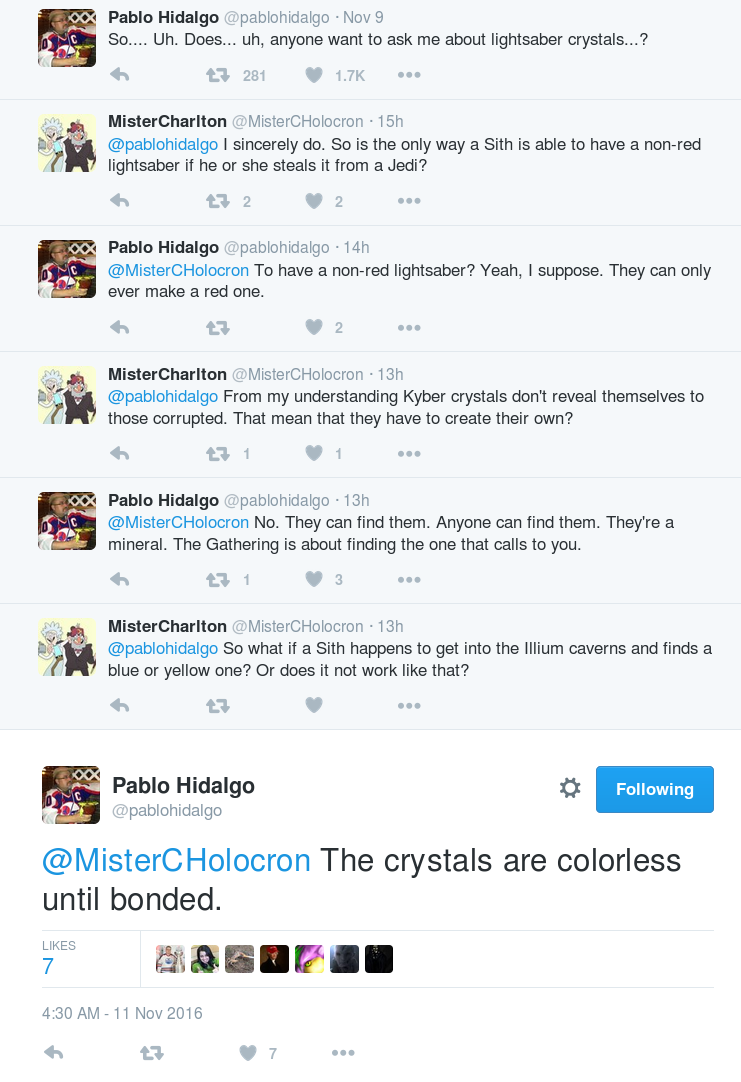 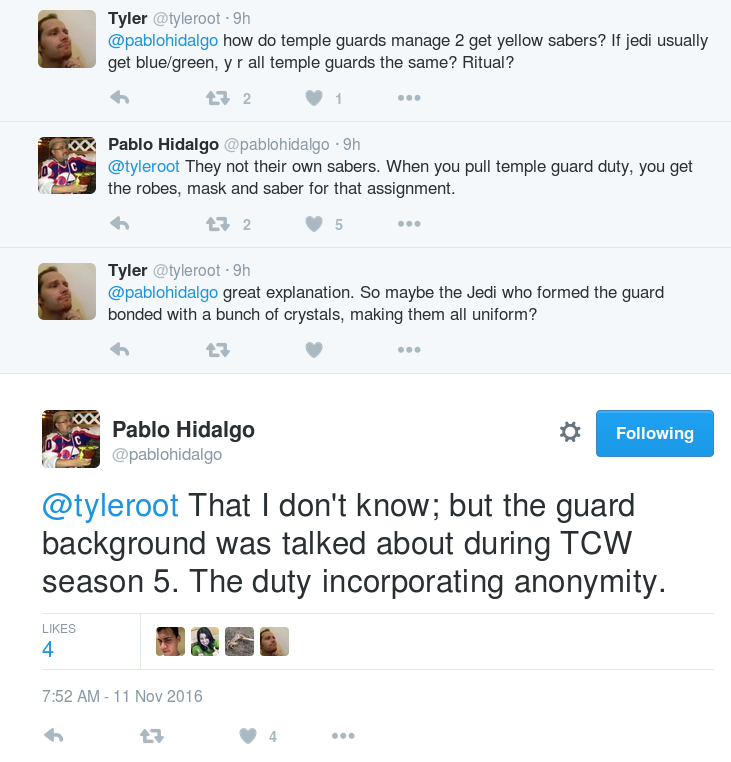 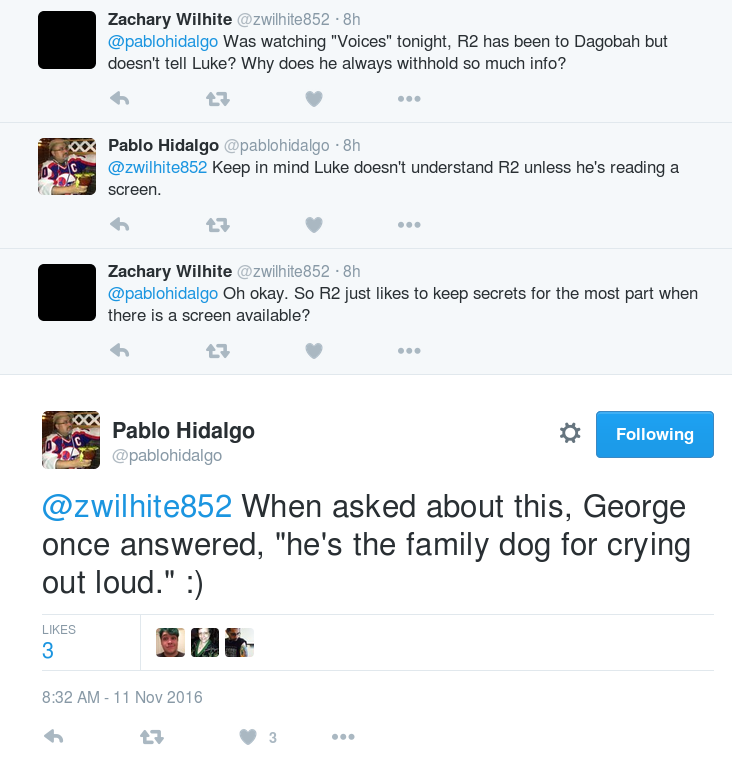