Editorial: Darkness and Light in The Force Awakens 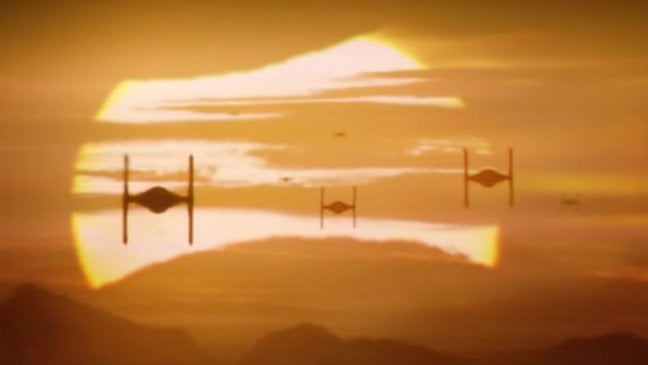 Warning: This piece will contain spoilers for The Force Awakens. Many of them. If you haven’t seen it yet, I suggest you get yourself to a theater before reading this.

There has been an awakening. Have you felt it? The Dark side…and the light.

Those were the first words we heard of the new Star Wars. After the sale of Lucasfilm and the long wait for any information on what the sequel trilogy would bring, this is what we were told. A mission statement of sorts. Star Wars has always been about good and evil. The righteous struggle of those who wish to do good and respect life against those who would control it and take dominion over it through sheer will and power. But within those powers of good and evil are the darkness and light. The eternal struggle within every human being that determines whether they are a good person or not. It’s within those forces of internal struggle that I think the main focus of the sequel trilogy lies, and Abrams brought that to the forefront through his use of light and dark imagery in The Force Awakens.

One of the most frequent questions directed at this movie since the reveal of Jakku was, why are we on Jakku and not Tatooine? Do we really need another desert planet? While I’m sure there are many reasons, logistical, story based, and otherwise, I think one has to do with the look of the planet. Tattoine was the frontier. It was dirty and used. Varying shades of brown in every direction. Jakku, in that regard is not Tatooine. The desert here is bright white. It is pristine, except for the skeletons of At-AT’s and Super Star Destroyers that dot the landscape. Jakku is very literally the graveyard of evil. It is the place tyranny dies and hope lives. And that hope lives in the form of Rey. 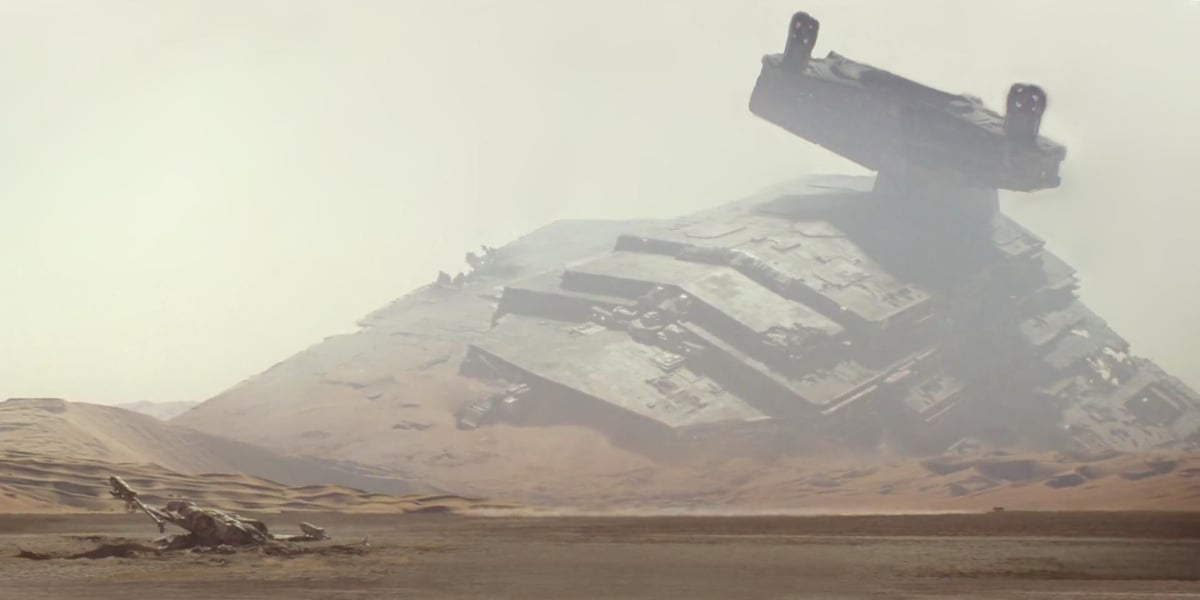 Rey, the very vision of hope rising from the ashes of the Empire’s death. Her name literally represents light. (No one ever said JJ wasn’t a bit on the nose with this imagery. That’s right Poe, we’ll get to your comments later). Rey is optimistic and hopeful to a fault. She is reluctant to leave Jakku and begin her life because she believes her family will return for her there. She is the flicker of light at the end of the universe. An ember of the fire of hope that has been extinguished in the absence of Luke Skywalker.   And when the darkness of the First Order comes to Jakku, that fire is stoked and begins to spread. 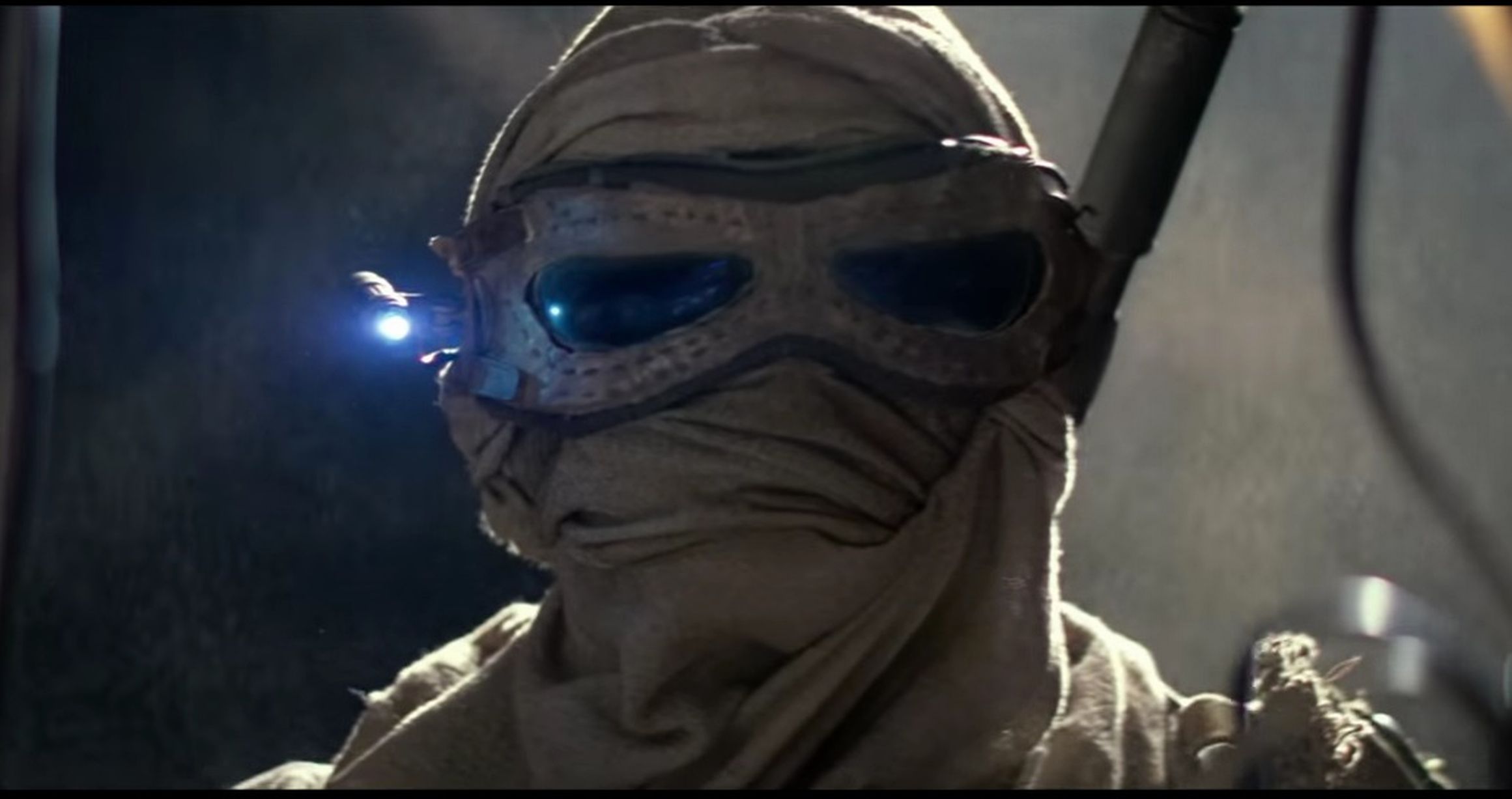 Oh, but that First Order is dark. The first shot of the movie after the opening crawl is so very telling. The Star Destroyer literally blotting out the light of Jakku. They descend on the village in darkness. They crush the light wherever they go. This is not the empire. The Empire was gray everywhere you looked. A toneless mass of industrialized homogenization. But in contrast, the First Order is dark. Literally. Compare an Imperial Star Destroyer to Kylo Ren’s ship. It’s so dark on that bridge, I was worried the officers might start nodding off at their stations. Their uniforms are black, where the Empire was gray. Snoke’s chamber, where he communicates with Kylo Ren and General Hux, is so dark we can hardly see. This is not an empire looking to impose order on a chaotic society. This is evil. Fanatical worshipers of the darkness.

We see it in Kylo Ren. Leia says “there is still light in him.” A notable departure in wording from the “good” Luke saw in Vader. Kylo Ren himself monologues that he feels a “call from the light” that he needs to stamp out once and for all. And that darkness that is in Kylo and The First Order seems to spread. Han’s freighter is a mass of darkness as it swallows up the Falcon. Inside the Falcon is bright and hopeful, imbued with the hopeful enthusiasm of Rey and Finn. But once they leave the Falcon, they are surrounded with the melancholic darkness of Han’s new life in the wake of his son’s betrayal. Leia on the other hand, does not lose hope. In Leia, and her Resistance base, we see the only pocket of light outside of Jakku. The resistance is an oasis of hope awash in a sea of despair. We see this contrasted in our brief look at the Republic capital on Hosnian prime. A dark city-planet, reminiscent of Imperial Coruscant.

Towards the end of the movie, this dichotomy turns into a very literal battle at Starkiller Base. A weapon-planet that literally consumes the light of a star to bring destruction. It sucks the light from a solar system and weaponizes it, leaving darkness and death in its wake. In one of the least subtle moments of the movie, Poe externalizes the symbolism by calling out that as long as there is light left there is hope as the weapon gets close to finishing its power-up cycle. It may be on the nose, but no less moving as we transport to that fateful bridge where Han meets his son for the last time. As the light in the sky runs out, so too does the hope. Kylo Ren completes his turn to the dark side by killing his father just as the light fades into darkness. 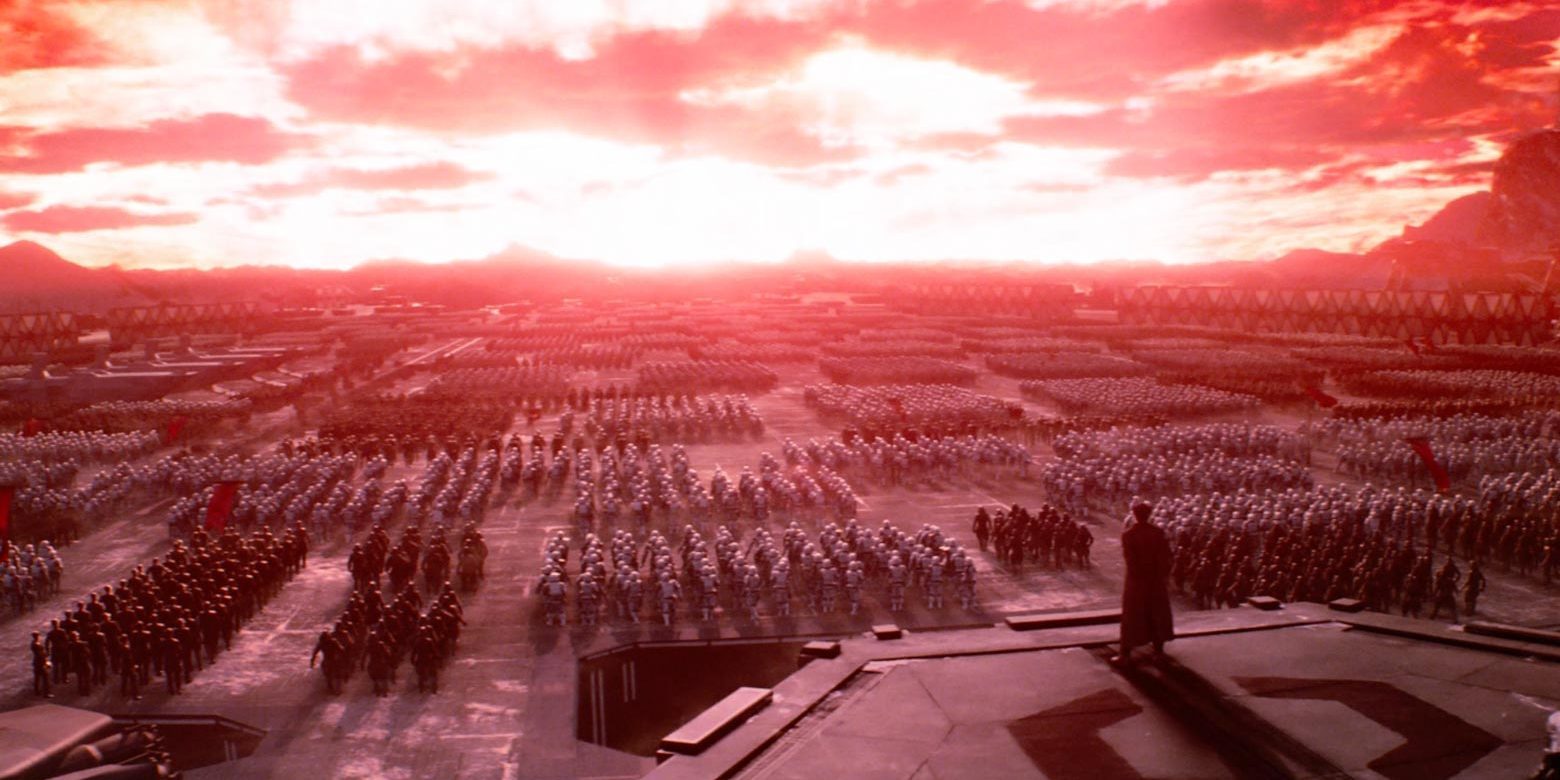 It is after this moment that all hope seems lost. We find Rey and Finn lost in a deep dark forest. They are only illuminated by the glow of the lightsabers. Desperate to escape from that darkness, both Finn and Rey carry that torch as a weapon against the darkness. Rey’s face is illuminated by both her blue and Kylo’s red lightsaber as the force awakens in her and she fights back in a dazzling display of twirling blue and red light as the planet crumbles beneath them and Rey finds herself stranded on a dying planet over Finn’s unconscious body. But out of that darkness they are suddenly illuminated in the bright light of hope as Chewie and the Falcon arrive to save them. The glaring bright light shocks within such deep darkness as Rey looks up at the lights of that “piece of garbage” and the salvation for both Rey and Finn it represents.

As the Falcon and the remaining X-wings depart the base they leave that dark space behind them. The First Order is given a defeat, but at a price. Where the planets of the republic capital once stood, is only the darkness of space. And in the vacuum of leadership, one can assume that the darkness of the First Order will spread. But the light of hope remains at the resistance base. Even in the wake of such extreme losses there is a brightness and optimism to the resistance. But there is also that unbreakable optimism in Rey as she takes off in the Falcon to find Luke. And when she does, we find him bathed in the sunlight of a beautiful blue and green world. On top of a mountain, Luke dressed all in light colors stands as a beacon of hope for both Rey and the resistance going forward. A beacon that will try to focus that light to fight the darkness in the remainder of the trilogy.

Where the saga goes from here is still an unknown. But with the themes at work and the dichotomy of Rey/Kylo against the backdrop of Luke’s failures as a teacher and Snokes seduction, I’d say that these movies want to examine that internal struggle. Not just the seduction of the dark side as we have seen in other Star Wars films, but in the ongoing pull of the darkness and light, even after you have chosen a side. These forces and icons of light and dark do battle at a macro level, while the crux of the trilogy will rest on the internal struggle of light and dark within Kylo Ren and Rey. Just like the defeat at Endor was not the end of the Empire, falling to the dark side or choosing the light is not the end of the battle. The struggle to do good or evil continues every day in everyone regardless of how good or evil they seem to be through their actions. I anticipate watching both Kylo Ren and Rey struggle against that pull from the other side in the next two movies.