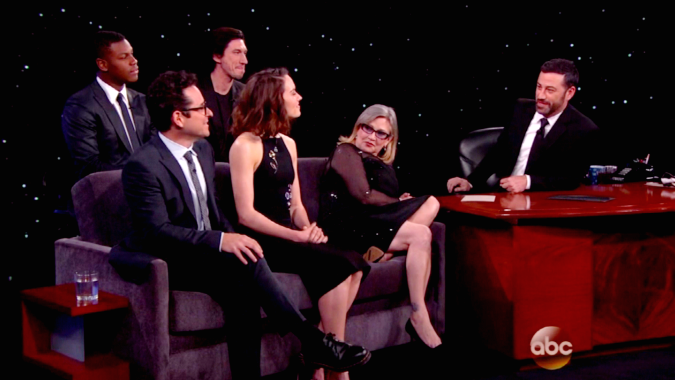 Tonight on Jimmy Kimmel Live! The cast of The Force Awakens.

According to ABC, the cast of The Force Awakens will appear on tonight’s Jimmy Kimmel Live! The show’s Facebook page revealed that the actors who will appear on this episode are Harrison Ford, Carrie Fisher, Daisy Ridley, Adam Driver, John Boyega and Director J.J. Abrams! You can catch it live tonight at 11:35|10:35c.

“Monday: The Cast of Star Wars VII: The Force Awakens”

The message on the site is vague, this was likely intentional. We doubt any new footage will be seen, but with the rate of the new TV spots and commercials lately its hard to say for sure.

Leave a comment on this page letting us know if you plan on watching.

Very cool show. So J.J. Abrams revealed that the first spoken word in the movie will be “This”. What do you think will follow after that? Probably “This is a story about…” Tell us in the comments below.

It’s funny how the young cast (the new big three) always first look at J.J. before answering a question… but not Carrie of course. 🙂