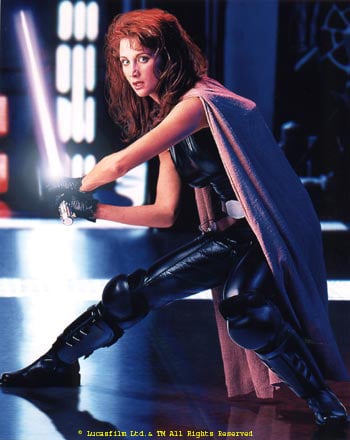 After Return of the Jedi came and went in the early 80’s, and we were possibly faced with never seeing another Star Wars Movie, author Timothy Zahn introduced us to Mara Jade in the Thrawn Trilogy ten years later as the Expanded Universe was running at full throttle in all available mediums.

At that time, the beautiful model Shannon McRandle (who is also a SW fan, and was aware of who Mara was), was chosen to represent our beloved Mara Jade in real life…err, photos. We recently caught up with Shannon, and she was kind enough to chat with us and discuss how that call changed her life, and her current views on the latest Star Wars installment. 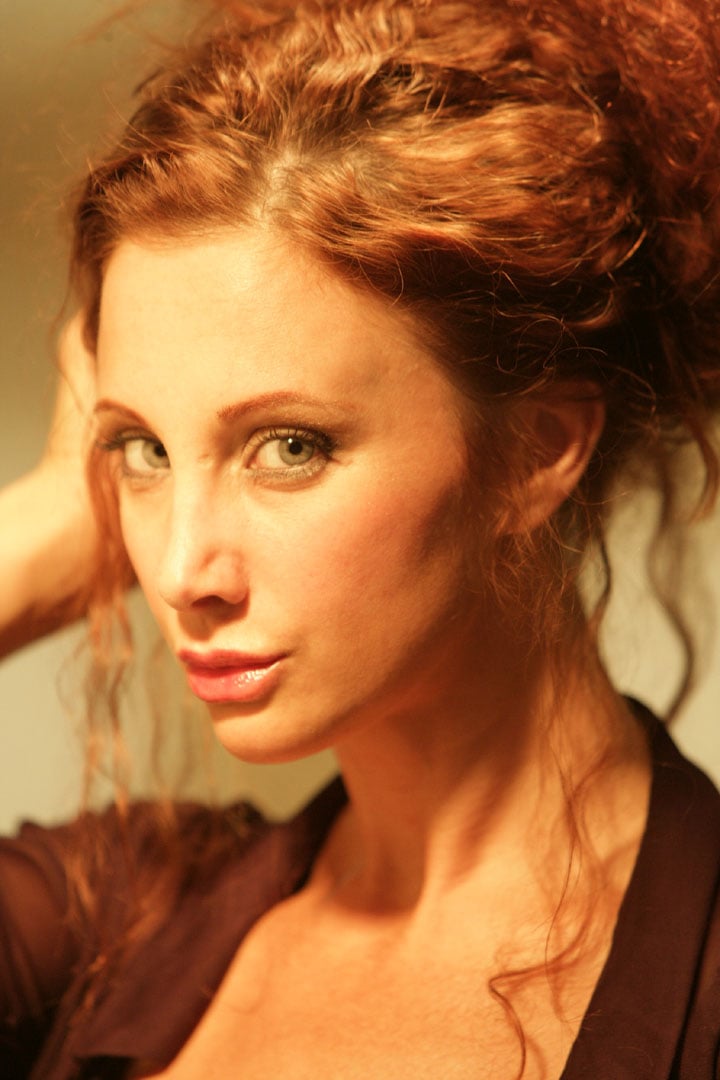 First of all Shannon, thanks very much for taking this time to chat with us and without trying to rehash the Star Wars interviews you’ve given in the last 15 years, we’ll try to be fresh!

SWNN: As a parent of teenagers, how do your kids react to the fact that you’re one of the most famous Star Wars characters that never saw the big screen?

SM:  My daughter doesn’t worry with it much one way or the other. She’s getting ready for college and a very accomplished dancer. My youngest is in fifth grade and sure is proud if someone brings it up and he gets to say “yea, that’s MY mom!”  My middle schooler, that one’s the Star Wars fanatic!  He’s seen everything, read A LOT, knows so much about EU, SW, what’s coming out, what’s going on……he was in a convo about it on the bus the other day and one of his buddies said let’s Google Riley’s mom…. and said, “YEP!  That’s MY MOM!” I have been blessed with fabulous children and they love SW as much as anyone else does, but only one of them thinks the jobs were traffic stopping!

SWNN: I’m aware that you’ve been a Star Wars fan, but have you kept up on the latest Star Wars news and rumors that Luke Skywalker may now have a daughter in the upcoming movie, and is there something that you need to tell us [Jedi hand wave]?

SM:  I’ve read a bit here and there about what’s going on.  I’m on the side of the fans that are happy about who is directing the new movies and that Disney has taken over.  I think SW is gonna have a fresh, young, slick new look, and I hear a bit here and there, but I am kinda just waiting for the movies and want to be surprised!  So NO emailing me with spoilers if you see it before I do!  I’d like to walk in as a casual fan and just enjoy the fun of the new movie, and trust me, you guys know way more about everything going on than I do, and by the way, I’ll always be a Han Solo fan!! 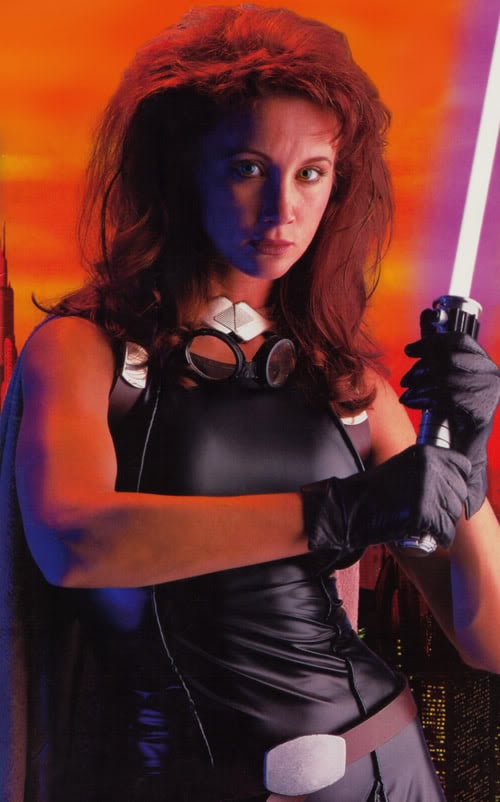 SWNN: Since Disney bought Lucasfilm and relegated all of Mara Jade’s stories to the “parts shelf”, would you rather see Mara on the screen being reborn into a new world effectively rewriting her history, or letting her forever live as the character that we already know?

SM: No, I don’t want them to mess with her anymore.  Tim (Zahn) wrote the most amazing character.  She was BADASS!  Very cool!  Very smart!  Yey!  Then somewhere down the road, someone killed her after torturing her with unbelievable plot lines for a while and gave her the dumbest, most random death, not befitting the character she was or had grown to be.  I have always said if she HAD to die, Tim should have been the one to kill her.  Let it lie.  Please, just let it be!  I trust Disney’s judgment for now!

SWNN: How many times have you “officially” portrayed Mara Jade, and when was the last time that you donned the costume?

SM:  I haven’t worn that thing since Decipher lost the license. When that happened, they lost all rights to portraying her for profit. I’ve heard rumors over the years that the costume, including my own personal items like shoes, were stolen, lost, shoved in a closet, sold, etc….who knows.  I wore that thing under protest!  It was really cool the very first time at Deciphercon the year they debuted it, and I always loved the green/light side outfit too, but I was 40 weeks pregnant with my second child and they called one night and asked if I wanted to do a promo card.  Of Course, I DID, were thy nuts?   We shot it in my basement in like an hour and they used it on that card.  It was not photoshopped or anything!, and I was so sick and exhausted from the pregnancy.  I really thought they would clean up the image! That was the last time my “image” was taken for anything of the kind My favorite was the Gentle Giants Bust! I got scanned for that at the San Diego comicon one year and like two years later it came out!  It’s gorgeous! 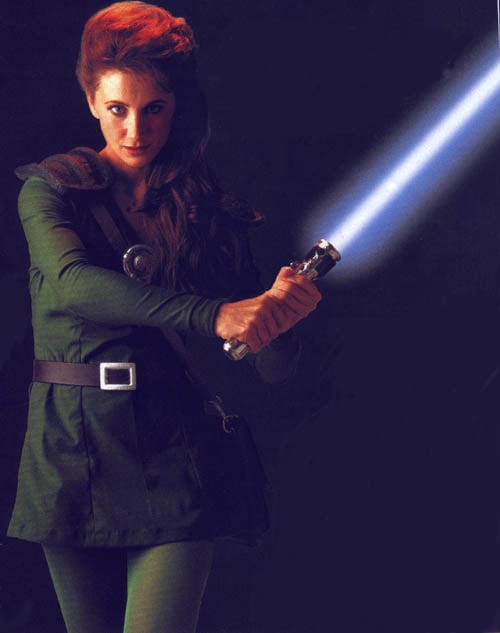 SWNN: As you’ve become quite famous as the character that you’ve portrayed, has there been any recent interest in having you revive Mara for future marketing purposes, and/or have you been approached (or informed) in any capacity regarding news of her re-emergence?

SM:  If she were going to make a re-emergance, I bet you would know before I would!  I would die if anyone else played her for small stuff like I have always done!  I think I still look pretty good!  I’d whip out the old weights and buff up a little if someone said they wanted to use me!  Smirk!  It would be fun!!!  I’m older, of course, but hey, if they can make Mark look good for a movie, they can make my skinny bottom look fabulous in a photo!

SWNN: Just for fun, What does your husband think of the fact that you’re some kind of apparent ass-kicking Star Wars Jedi Knight?

SM: Hmmm….well, If I told you, I’d have to kill you…he has a real world badass job, so I’m small potatoes here!  Honestly though, he knew who the character was.  When I met him like 15 years ago, his roommate was a big EU guy, so He’d heard all about Mara and all of my peers!  He had fun with it back then!  Kinda like two low level rock stars we were!  He got to go with me to the first couple of really huge cons I did and there is nothing like rocking a guy’s world by hanging out after work in a bar with Kenny Baker or Jeremy Bulloch!

SWNN: How would you personally like to see the Star Wars story progress from this time forward?

SM:  HMMM..again…you are really making me think about these!  I think I need to see the next movie before I can answer this one!  I have not kept up with the EU reading so I’m not too sure how the worlds are out there, but movie wise, I need to wait and see!  It’s like it’s on pause for me!  But say they did decide to bring her in at some point, even just a glimpse or memory, I think they should stick me in there (wink), or better yet, use my daughter!  Ha!  How awesome and fun fan fact cool would that be?  Willow as Mara…makes a girl think!  As long as they don’t kill Han, I’m good with some twisty turny stuff, but I am excited to see what is going to happen…it’s been too long since there was a really good story on the screen that was live action! 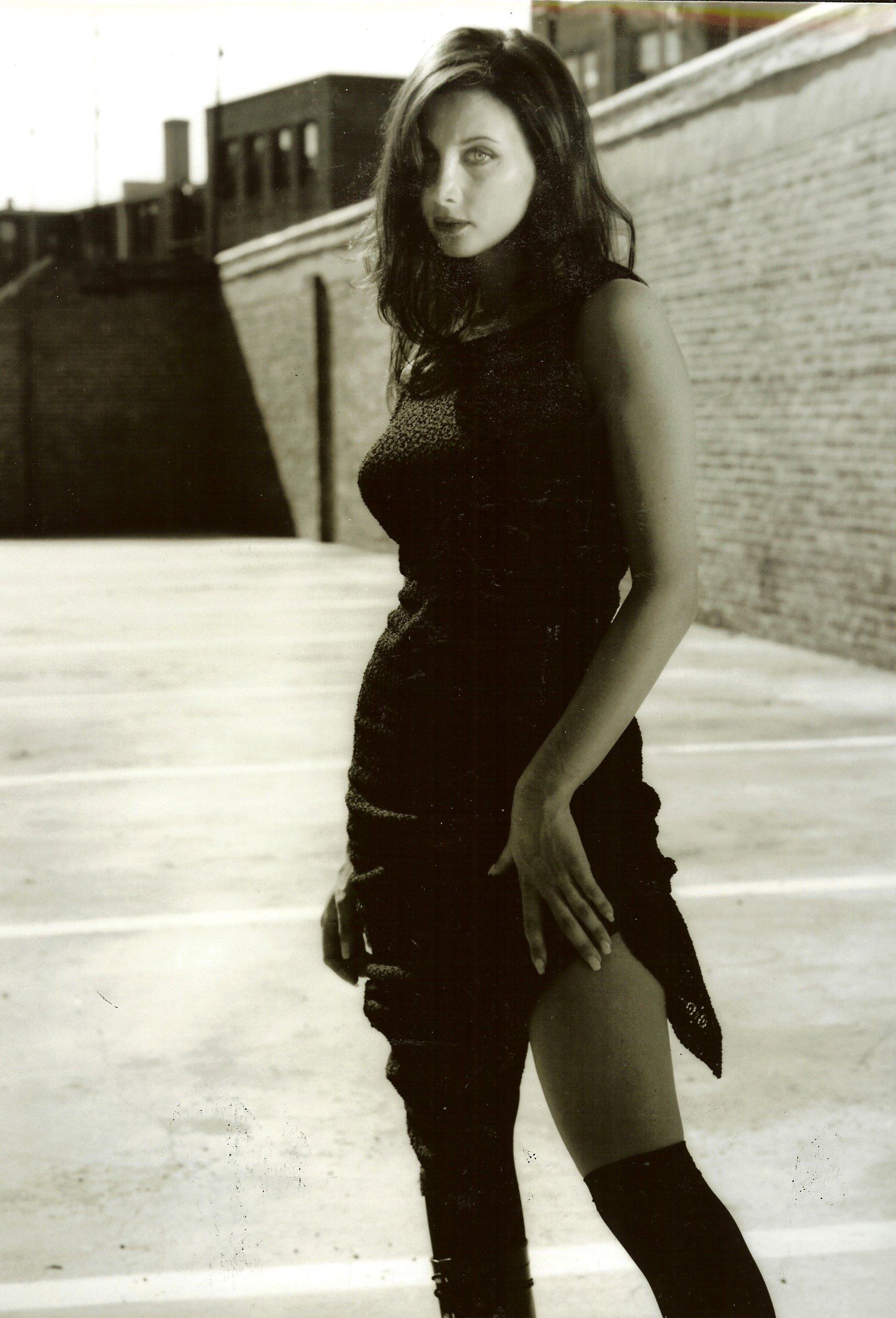 So there you go folks…a few words from Mara herself. This author would like to thank Shannon for some good conversation and good times during it…Thanks SO much Shannon.

Finally, a word to you, the fans, from Shannon McRandle:

It has been an amazing adventure!  Who knew that one picture could start such an epic journey for one model in Virginia!  Over the course of the last 15 years, I have been so lucky, so privileged to go the places I have because of you, to meet the people I have because of you and to be the character that YOU all love so much!  You also gave me that love for her!  I hope that over these years if you have met me at a convention or emailed me with an autograph request, that you have been thrilled with your experience!  Star Wars is an amazing universe no matter what part of it you love or follow.  Our little corner of the world is the best as far as I am concerned.  It is so rich with multiple story lines, character development and possibilities and of course, tragedies!  I thank you from the bottom of my heart for keeping Mara alive as Tim wrote her and we all have loved her!  I’m so sorry if she is not in the new movies and that if there are currently no plans on reviving her, but trust me, she will live on!  Thanks so much for thinking about interviewing me and for remembering Mara with all of the excitement over the new and hopefully wonderful movies!  God Bless and MTFBWY Always!  Shannon.”