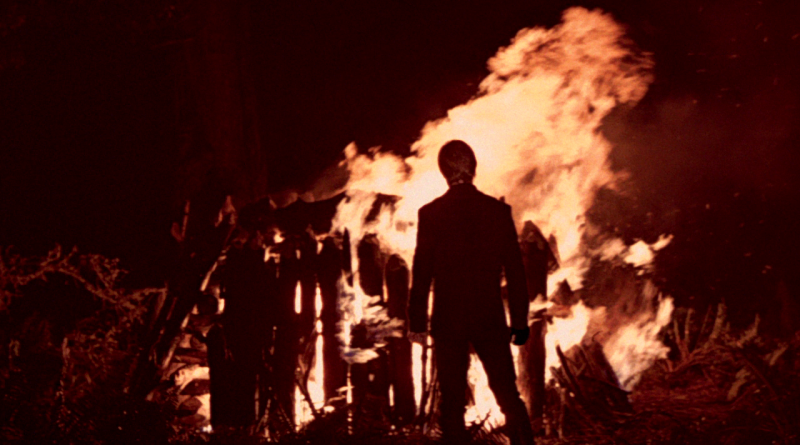 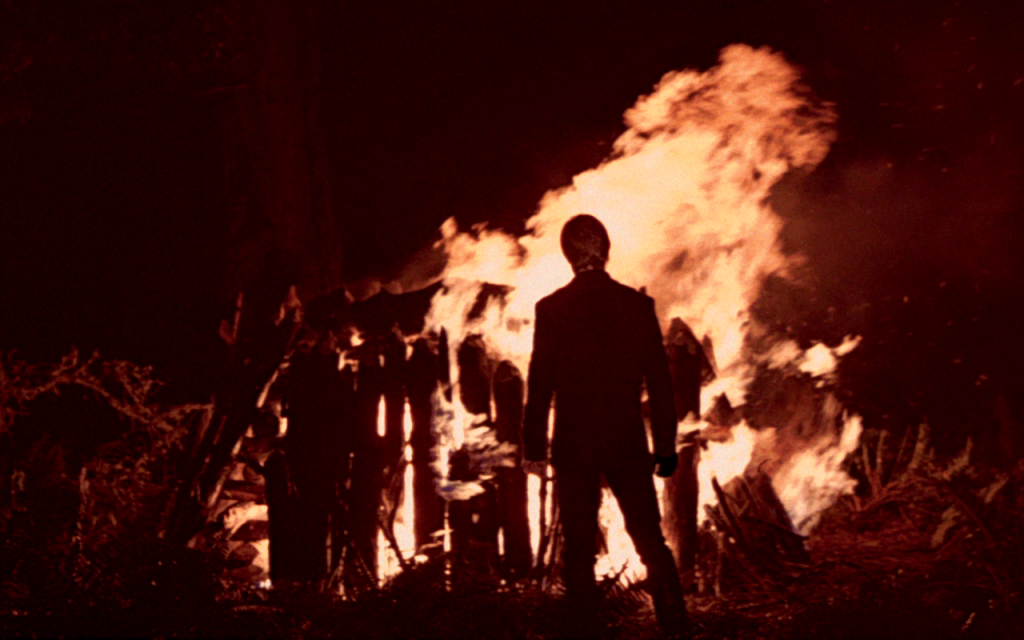 In the 1989 book “Icons: Intimate Portraits,” author Denise Worrell gave us some foresight into what we might expect in Star Wars: Episode VII — “The third [trilogy will] deal with moral and philosophical problems,” Lucas said in 1983. “In Star Wars, there is a very clear line drawn between good and evil. Eventually you have to face the fact that good and evil aren’t that clear-cut and the real issue is trying to understand the difference.” We’ll take a closer look at how George’s quote might relate to the role of the Jedi as well as why HitFix’s Drew McWeeny agrees that it won’t be that clear-cut.

Mr. Mysterybox, a.k.a. JJ Abrams, is having a great time directing Star Wars: Episode VII one would presume. He must be even giddier than a Tatooine farmboy blasting wamprats that his mystery box strategy of tightly guarding the secrets of his production have unleashed a furious storm of strange, if not weird and confounding, to say the least, speculations and rumors across the internets. Most notably, it seems, if one is to put stock into any number of these dubious rumors and “leaks,” that JJ has sullied our chocolate with his peanut butter, OR, more precisely, has tainted our Star Wars with his Star Trek by making everyone from Max Von Sydow to Mark Hamill’s “Luke Skywalker” a cyborg of some sort. “We are Borg. Resistance is blah, blah, blah . . . ” which is to say that JJ has apparently followed one of the presumed themes of the Sequel Trilogy as George Lucas envisioned it — nothing is that clear-cut.

The great website TheSecretHistoryofStarWars has done an excellent job of chronicling the evolution of the saga over the years. Therein we read the following passage:

In 1980 Lucas revealed to Time magazine that the sequel trilogy would revolve around “the rebuilding of the Republic,” and in 1983 stated to that magazine that thematically it would be about “the necessity for moral choices and the wisdom needed to distinguish right from wrong,”

With the rebuilding of the Republic it is quite understandable for one to assume that the Jedi order would be rebuilt as well. The Rebel Alliance won the day in Episode VI and only with the assistance of the last Jedi in the galaxy. We, the audience of fans, know how great a person young Luke Skywalker is and that he is the right person for the task of resurrecting the Jedi Order. BUT what if these common assumptions are completely wrong? What if Luke Skywalker, understanding how the absolute power of a Jedi is capable of corrupting absolutely, simply walked away? What IF Jedi Master Luke Skywalker went into a self-imposed exile after the events of ROTJ? These are all the intriguing possibilities that have been discussed, leaked, rumored and speculated upon. 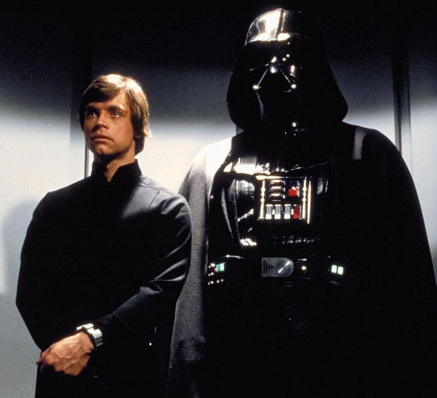 How likely are they, however? Well, IF your last name is Skywalker, it would be understandable that he may not want to broadcast that fact to the Republic (new or otherwise) as the Jedi, when last we knew, were deemed corrupted, traitorous, outlaws; the Jedi Order left in flames and ruin. It makes sense that Luke, being the only known Jedi in the galaxy, would wish to seclude himself, his danger, from the rest of the galaxy.

Being a human is a complex and tricky job. Being a human with incredible powers increases that difficulty level tenfold. Luke Skywalker, throughout his story arc of the Original Trilogy, learned full well that his powers could lead him down the path to the Dark Side. I mean, how many of us have been stuck in bumper to bumper traffic and wished we had the Force simply to wave aside the cars and allow us to pass? I have. BUT what if in a fit of road rage we used the Force to smash the cars and then throw them aside?! A tricky conundrum, which is why in real-life people don’t have the Force — we don’t know how to wield it. Luke’s internal struggle in Return of the Jedi gave him some clear insight into the slippery slope the Force presents. 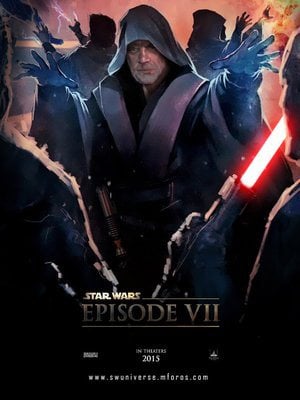 This brings me to an interesting question posed to HitFix’s Drew McWeeny. In [the current] Episode #111 of “Ask Drew”, McWeeny provides an interesting answer to the second and lengthy question asked:

Q– “Okay, so Mike Ryan at Huffington Post and James Whitbrook over on 109 have both written articles on why Star Wars could do with pulling back on the Jedi. as a fan of the saga who can no doubt remember a time before Star Wars was all twirly twirly lightsabers, how do you feel about this? Should Star Wars give Jedi a break?”

A– “I can say today that I’m feeling more confident about Episode VII than I’ve ever felt before. And part of that is that I think the story they’ve created is a really interesting way of both steering directly into the nostalgia people have for the first three films, but also shattering that nostalgia by showing that much of what we’ve held onto — the characters and the universe — we have to let go. One of the things that you should expect is the Jedi ABSOLUTELY have a major role in this next trilogy, but it may not be the role that we expect. The events that we’ve seen in the other films have definitely taken a toll in terms of how the universe of Star Wars sees the Jedi and how they see them as an active force. I think it’s safe to say that they are not considered a pure, good thing anymore and that Jedi in general are going to be a very interesting, difficult topic in the new films. I think that anything we’ve already seen in these movies we should be prepared to let go of because I don’t think they’re covering the same ground. It’s a very, very exciting moment to be a Star Wars fan in general.” 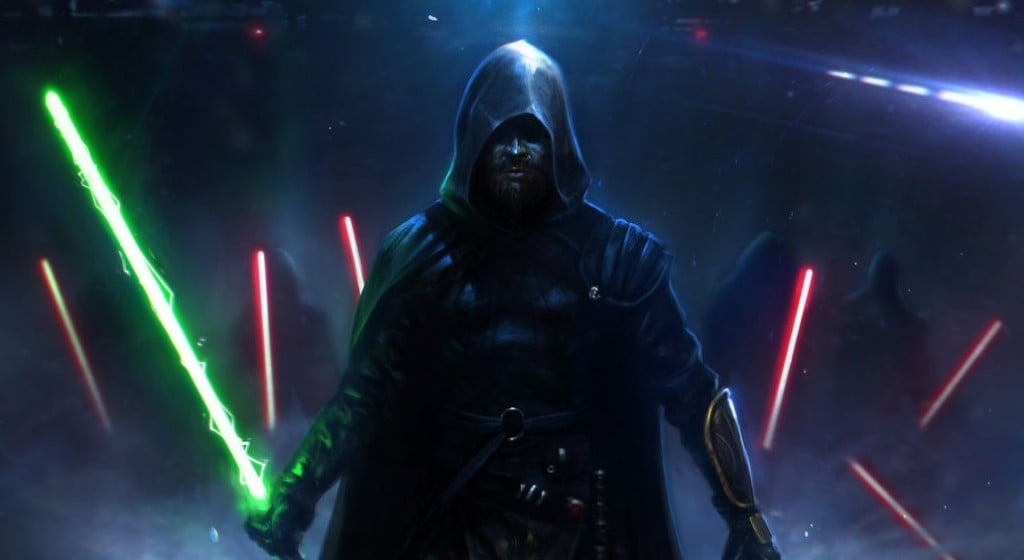 Drew’s answer actually seems to support a theory I espoused to the fine folks in “The Cantina” forum. My theory based on everything I’ve read or heard, and to be taken with the Doctor’s prescribed dosage of salt, runs thusly: With Luke Skywalker in self-imposed exile, due to his fear of becoming corrupted like Vader and Sidious, has done the galaxy a great dis-service. Sure, Luke is the only Jedi in the galaxy at the end of ROTJ, BUT that doesn’t mean he is the only Jedi to exist ever again. My theory is that in the interim between Episode VI and Episode VII hundreds, if not thousands, of young men and women, human and alien alike, have come to realize that they, too, are “Force attuned.” However, without any kind of structure — mentor-ship, education, history or hand to guide — them, these Force attuned individuals are roaming the galaxy willy-nilly, lost, confused, alone and powerful, searching for the true history of the Jedi and the last known Jedi in the galaxy. These “poseurs” might even be training themselves, or others in loose clans, with what little knowledge they have gained, dispensing their own form of “justice” along the way. 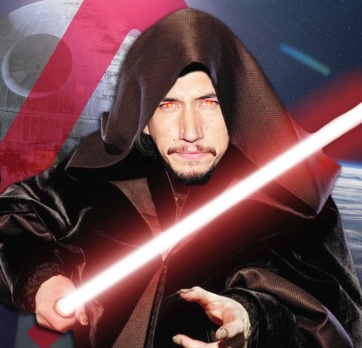 Some of the rampant rumors seem to suggest that my theory is accurate. SPOILER ALERT! Rumor has it that Adam Driver’s character is an aristocrat who is obsessed with Sith artifacts. Presumably without mentorship it appears that this character is teaching himself the ways of the Force — the Dark Side of the Force. Are others following suit? What kind of chaotic and confused state will the galaxy be then if half-cocked, smart enough to be dangerous, biological weapons were unleashed in a galaxy still at war? It makes for a very intriguing premise, not to mention jibes perfectly with the theme of, “the necessity for moral choices and the wisdom needed to distinguish right from wrong,”

This very intriguing potentiality completely flies in the face of the afore- mentioned Huffington Posts’s Mike Ryan article declaring that “Episode VII: Jedi Are Boring.” The title alone is laughable since Ryan, or anyone else outside the production, obviously knows nothing of what Episode VII is and has apparently spent little thought considering the question which is proved by this quote:

“Regardless of all that, telling a story of young Skywalker children training to be Jedi would be a mistake for a few reasons. The main reason being that Jedi are boring.

He goes on to back up his ridiculous statements by saying:

“I have nothing against Jedi, I just liked them better when they were all dead. Jedi were always better left up to the imagination.”

Which is a pretty funny statement since Mike Ryan is so painfully unimaginative it has to make one wonder why and how he became a writer. How is he able to imagine anything more “exciting” about the Jedi before they were all dead than George Lucas? A space opera fantasy without super beings is just another space drama, like say, Star Trek. No Jedi there. It would be like reading or watching Lord of the Rings without wizards. Laugh. Thankfully for us fans Mike Ryan is left to write for the Huffington Post and NOT for beloved Disney & Lucasfilm.

Aside from Ryan’s humorous attempt at contending that “Jedi are boring,” Drew McWeeny and I both agree that we are definitely going to see a ton of Jedi. BUT it is a chaotic and haphazard state of the galaxy that will see the rise of the Jedi into a new form of entity without guidance which, as Drew stated, may not be considered “a pure, good thing.” 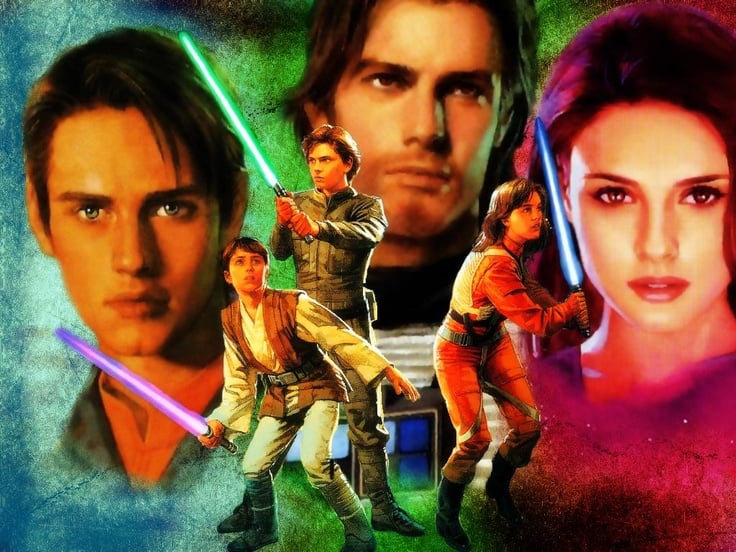 Luke, when finally found, must confront not only his own “demons,” his relation to Vader, his own fears of corruption, but also that he has failed the galaxy at large by NOT rebuilding the Jedi Order and training the next generation of Jedi. And herein we are introduced to another of the presumed themes and conflicts that was implored by Jedi Master Yoda, “Always pass on what you have learned.” Not only is this a fitting theme for the Sequel Trilogy saga but also for the production en masse as that is exactly what George Lucas has said when he sold Lucasfilm Ltd. to Disney, “Pass the torch to the next generation of filmmakers.” BUT what state will these fledgling Jedi, left to their own devices, be in by the time they find guidance, that light in the proverbial darkness? How far down the path to the Dark Side will will they be? These are incredibly exciting, far from boring, answers that JJ Abrams has the privilege of revealing next December. 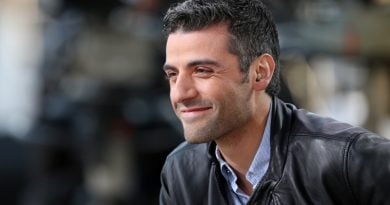 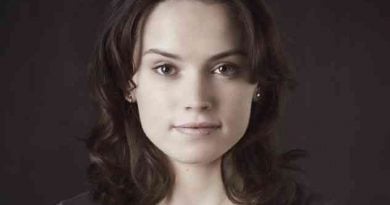 85 thoughts on “The Role of the Jedi in Star Wars: Episode VII?”