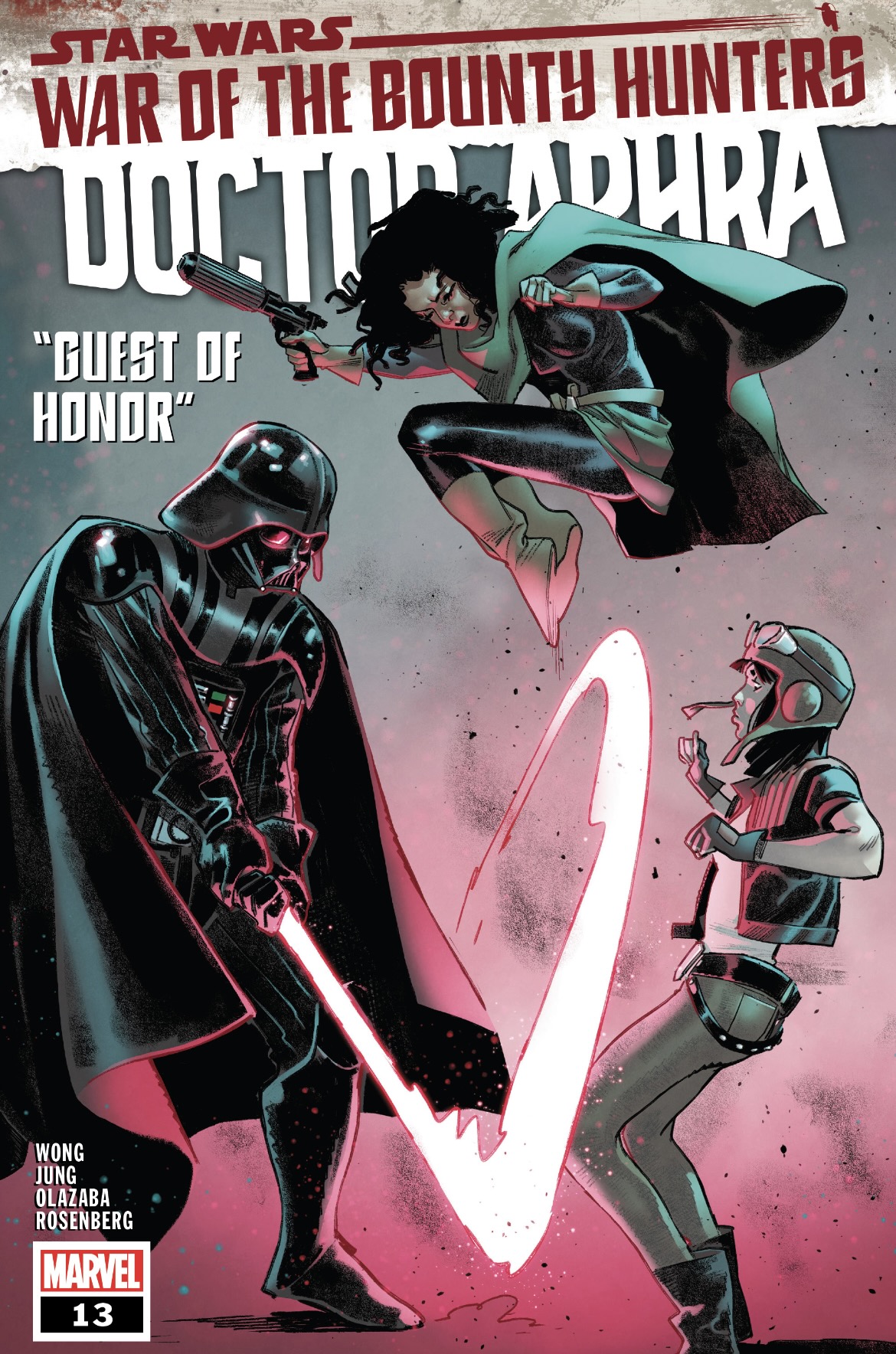 Aphra just can’t seem to quit Darth Vader, even though she wishes she could. As War of the Bounty Hunters welcomed the Dark Lord of the Sith in other ancillary issues, Doctor Aphra takes the opportunity to show what else is happening in the bowels of the Crimson Dawn flagship while Vader and Qi’ra duke it out. Remember Dryden Vos’ elaborate collection on display in Solo: A Star Wars Story? If you do, you’re not the only one, as Aphra sees an opportunity to go treasure hunting amidst the chaos. SPOILERS AHEAD…. 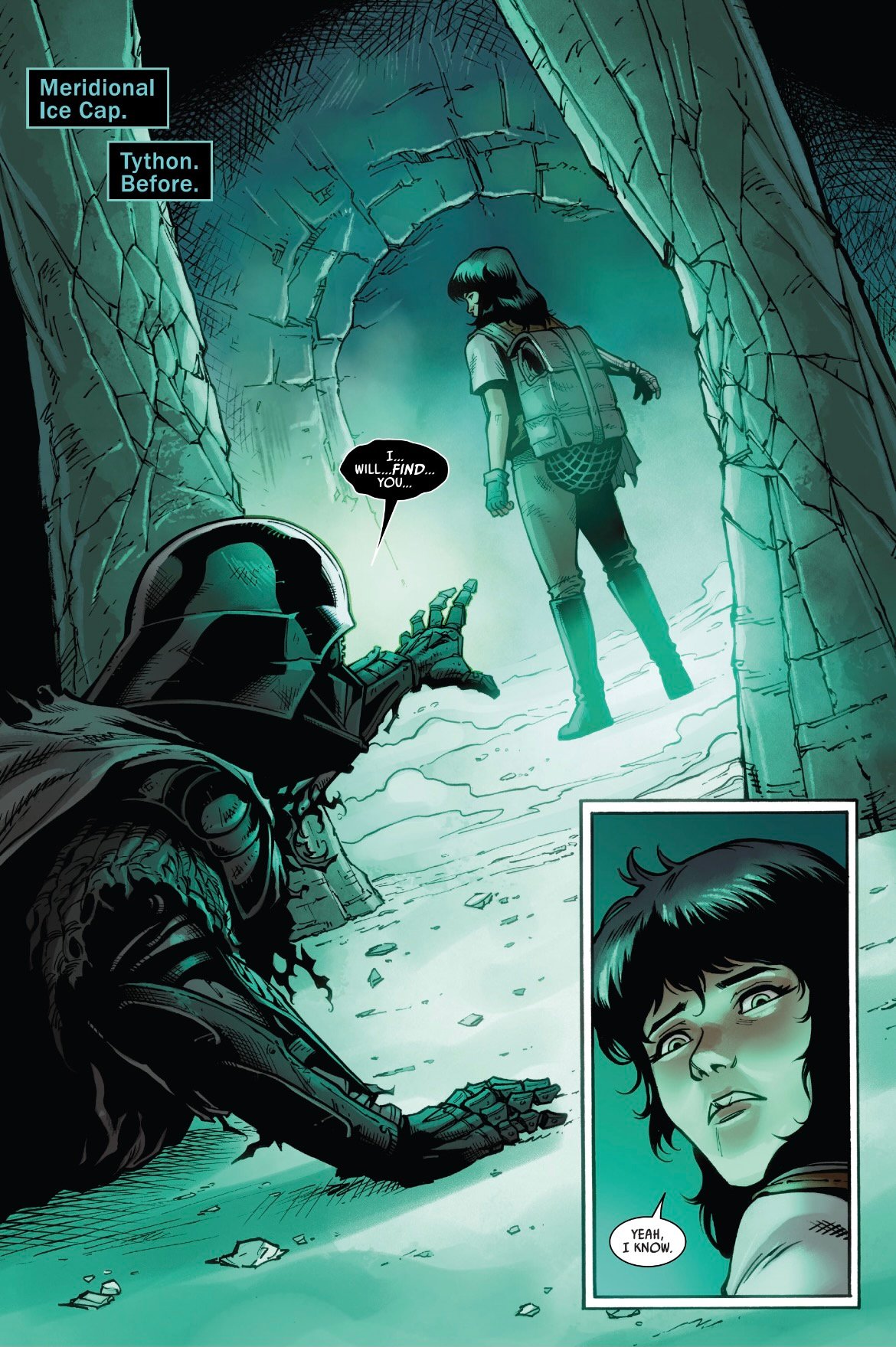 Writer Alyssa Wong opens the issue with a reminder: Chelli Lona Aphra might not be afraid of much but she’s certainly terrified of Darth Vader. Vader left a lasting impression on her, blowing her out of an airlock and coming back for a second round. Aphra got the better of him, but now he’s mere meters from her. Aphra doesn’t realize Vader has more pressing matters on his hand, as anxiety sets in and she starts to make a break for it. The trauma from her first conflict with Vader is debilitating for Aphra, as she’s barely able to gather herself enough to flee.

As a reader, sometimes it’s easy to forget characters in the story don’t know the whole story. Aphra takes a moment to explain to Sana why they need to get off the Vermillion, flagship of Crimson Dawn, and fast. Sana knows too well Aphra tends to be a dubious narrator but their history together helps her understand the threat is real. Sana doesn’t have time for sympathy, as they have a job to do for a similarly ruthless Domina Tagge. After having planted a tracker on a Black Sun operative’s necklace, itself composed of data chips, Sana and Aphra must finish their assignment by retrieving it.

The tracker also acts as a weapon, stunning the Black Sun member just in time for Aphra and Sana to take her down. As they retrieve the necklace and search the rest of her person, Sana discovers a Crimson Dawn tattoo. They discover through her communications she’s a Crimson Dawn spy, infiltrating Black Sun. With the upcoming Qi’ra comic series from writer Charles Soule, it sounds like we’re going to learn the Crimson Dawn leader has been quite busy in the criminal world of a galaxy far, far away. Infiltrating a rival organization as powerful as Black Sun is no small task and pretty risky. This makes me even more excited to see what Qi’ra has been up to.

Meanwhile, Just Lucky and Ariole are in a tough duel of their own. Their former teacher, Gallin, betrayed their organization, the Sixth Kin. We learn Gallin was more than just a teacher, he felt like family to Lucky and Ariole. His betrayal feels like a gut punch to them both and they are struggling to contain him. Gallin notes he trained them to fight together and the emotional distance between the two gives the teacher a big advantage. Just as Gallin is about to finish it, Lucky surprises him with a blaster pointed at the back of his head.

While Sana was ready to follow Aphra’s lead and hightail it off the Vermillion, her partner in crime has a change of heart. Aphra is aware there are some artifacts in the vaults of Crimson Dawn. We got a glimpse of this when Dryden Vos ran the show and it’s not too big of a jump to assume Qi’ra has expanded that collection (not to mention Darth Maul’s likely contributions). This gets me really excited! Aphra is her best when she’s treasure hunting and she convinces Sana to join her. 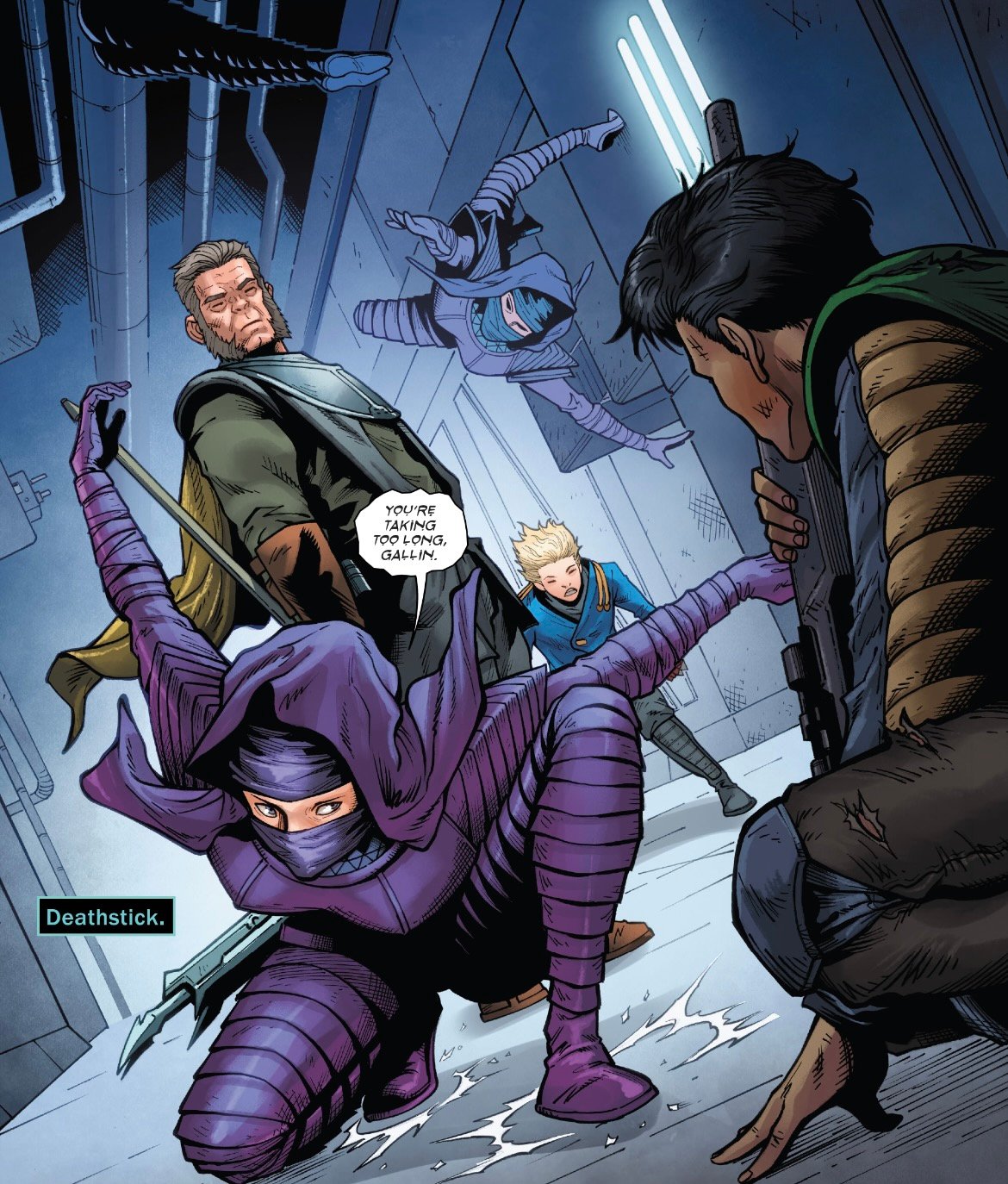 Hello there! Just Lucky gets a surprise from this new assassin, Deathstick. Likely this is an introduction of a new character we’ll be seeing a lot more of. She poisons both Lucky and Ariole with a Dathmorian concoction. As life starts to leave them fast, we’ll be left hanging about their fate and who Deathstick is until the next issue. I’m sure intrigued! 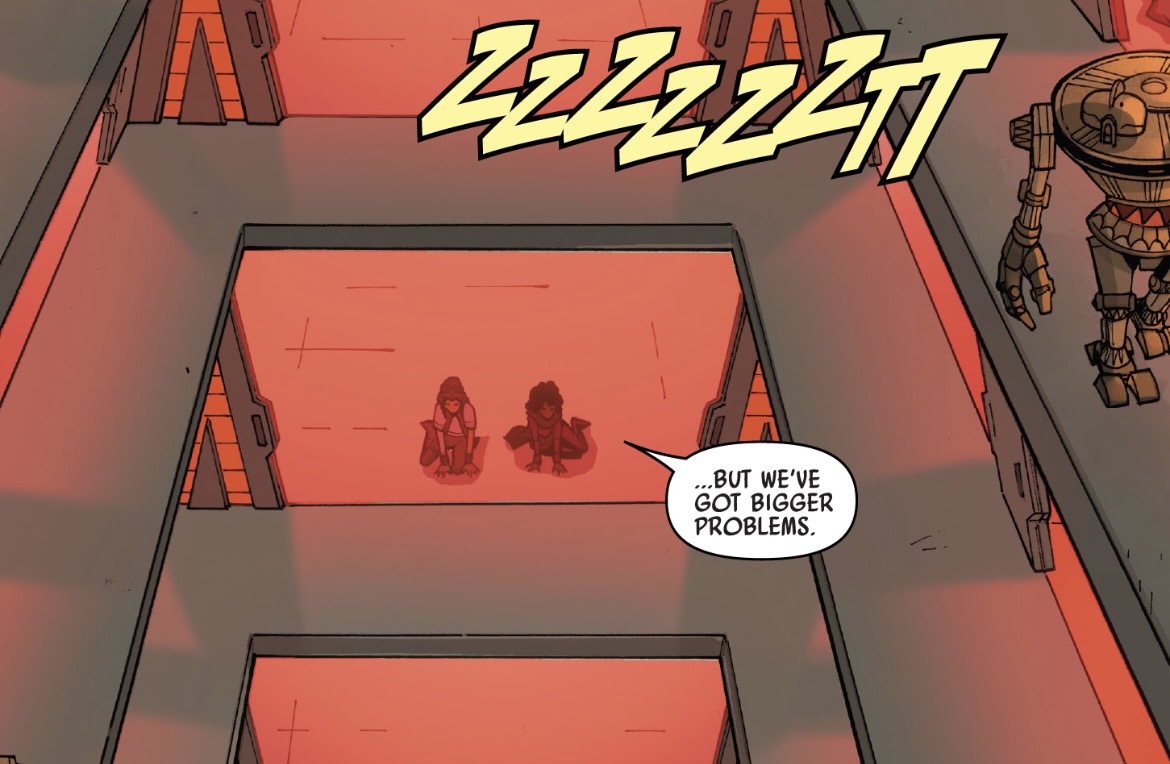 Aphra and Sana run into a bit of their own trouble. As they approach the vault, a sentinel droid stuns them and throws them into a detention center. Sounds like I might be getting that Qi’ra/Aphra meeting I’ve been hoping for. Wonder if Qi’ra is about to recruit two new Crimson Dawn spies of her own, seeing how they’re working for Domina Tagge, likely a person of interest to the ambitious crime lord. So many great set-ups and cliffhangers.

Doctor Aphra has some of my favorite art in the current line up of Star Wars titles. This issue is no exception. Artists Minkyu Jung, Victor Olazaba, and Rachelle Rosenberg bring so much life to their collaborative work. Writer Alyssa Wong continues to impress me with the directions she takes Aphra and Sana, giving enough of the familiar while reminding us there is still so much humanity under the guarded, space-fairing archaeologist. I loved this issue and can’t wait for the next one. 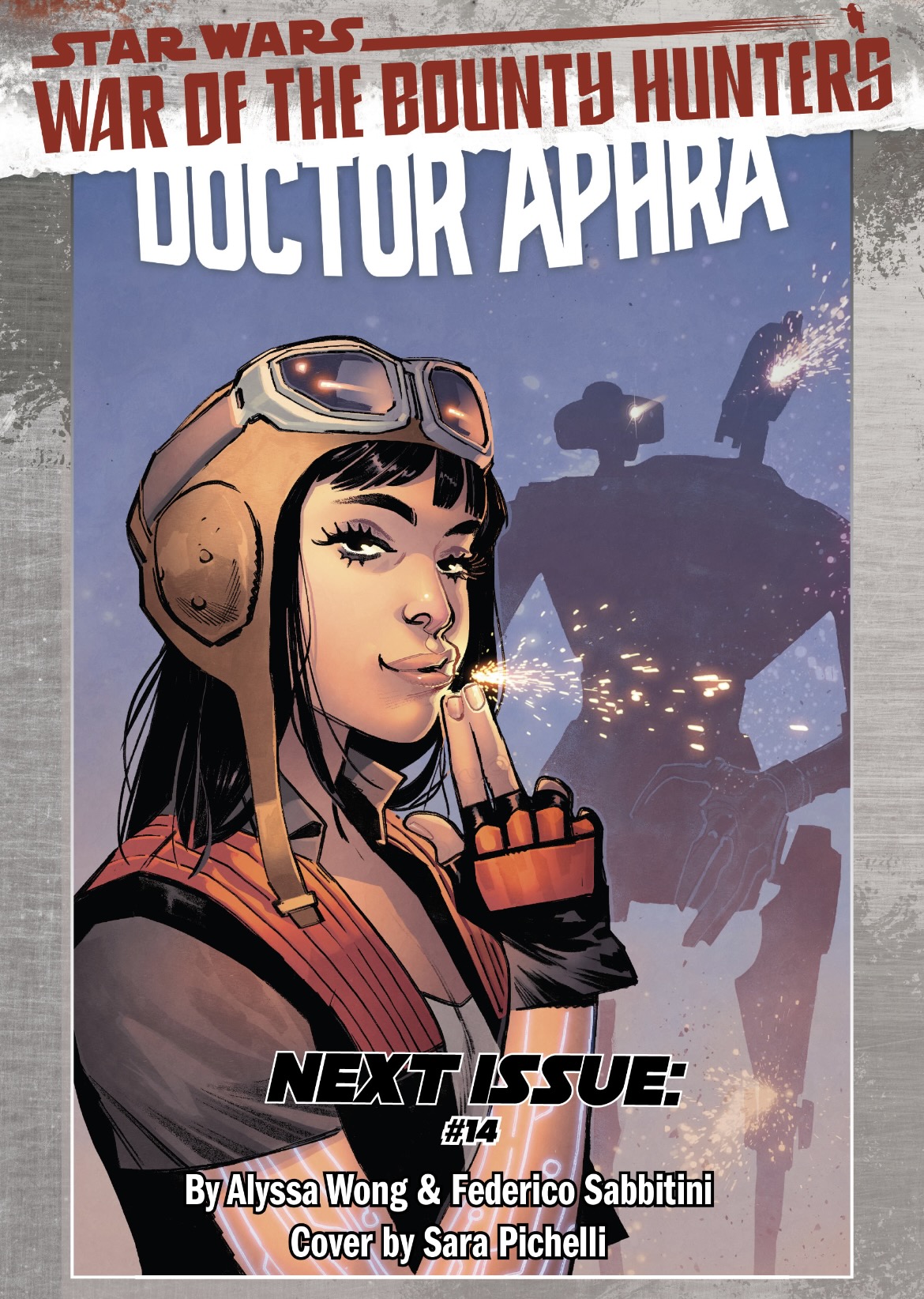