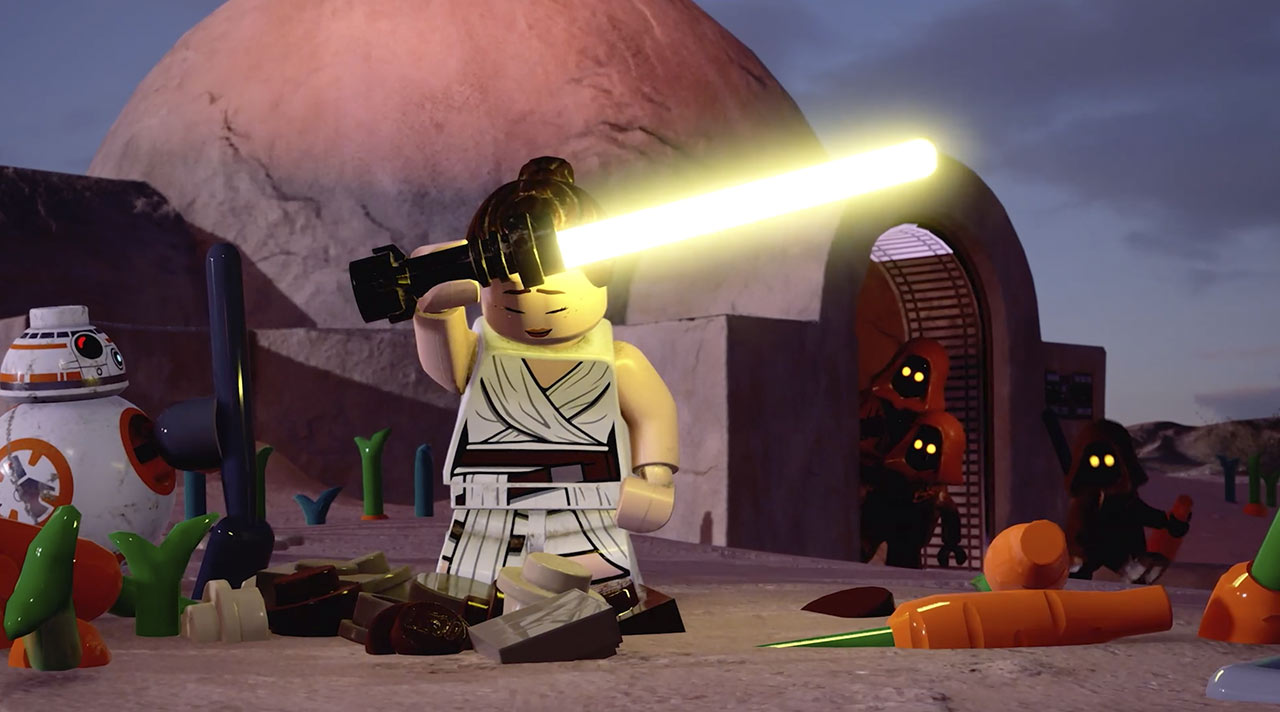 The new look at LEGO Star Wars: The Skywalker Saga has finally arrived! Watch the trailer below followed by details from the press release regarding gameplay and what this new saga-encompassing game brings to the table.

Almost an entire year since the last big look at the game, the newest trailer for the latest LEGO Star Wars title has a greater emphasis on gameplay across all nine films of The Skywalker Saga – The Phantom Menace, Attack of the Clones, Revenge of the Sith, A New Hope, The Empire Strikes Back, Return of the Jedi, The Force Awakens, The Last Jedi, and The Rise of Skywalker. Each movie will get its own unique campaign adapting the stories across 25 explorable open-world planets (Naboo, Tatooine, Coruscant, Kamino, Geonosis, Kashyyyk, Utapau, Mustafar, Yavin 4, Hoth, Dagobah, Bespin, Endor, Jakku, Takodana, D’Qar, Starkiller Base, Ahch-To, Cantonica, Crait, Ajan Kloss, Pasaana, Kijimi, Kef Bir, and Exegol) and 5 missions for each film, with hundreds of characters and vehicles playable in a title that will allow players to experience a new take on all nine movies in one place. Outside of these campaigns and story missions, players can experience a variety of side quests and random encounters that make this entry in the long-running series more than worth the wait.

The trailer was revealed at Gamescom, which also revealed a new release window for the title following a series of delays tied to the COVID-19 pandemic complicating development alongside other unexpected challenges (since The Skywalker Saga is made on a completely new engine and is not merely porting over assets from previous LEGO Star Wars games). All the same, the game looks like a stunning, all-encompassing Star Wars experience delivered through an irreverent take that only the LEGO adaptations seem to be able to provide. Check out the trailer below followed by official text from the press release:

LEGO Star Wars: The Skywalker Saga features the biggest roster of playable characters in the LEGO Star Wars series and players will engage in new ways of combat as they wield lightsabers, fire blasters, and chain different attacks with the greatest legends from every era of the Skywalker saga. Players can fight against the forces of evil as favorite characters such as Luke Skywalker™, Rey™, Obi-Wan Kenobi™, Finn™, BB-8™ and a legion of other heroes.

The greatest space and land vehicles are also available to command. Players can jump to lightspeed in the Millennium Falcon to outrun Imperial starships, battle First Order TIE fighters in Resistance X-wings, or podrace on Tatooine. Players will be able to travel through hyperspace and explore planets that can be unlocked during their adventures. From the jungle moon of Ajan Kloss to the vibrant, city-covered planet Coruscant, the LEGO Star Wars galaxy is yours to discover and play in.

LEGO Star Wars: The Skywalker Saga will be released next spring for the Nintendo Switch, Xbox One, Xbox Series X, PlayStation 4, and PlayStation 5 consoles, along with Microsoft Windows.