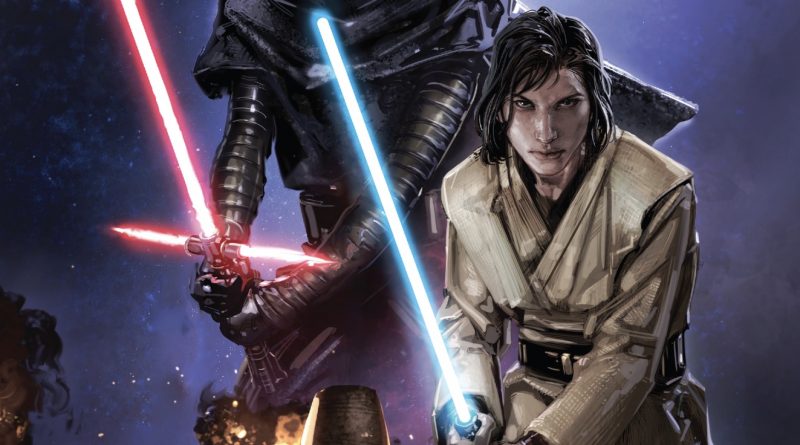 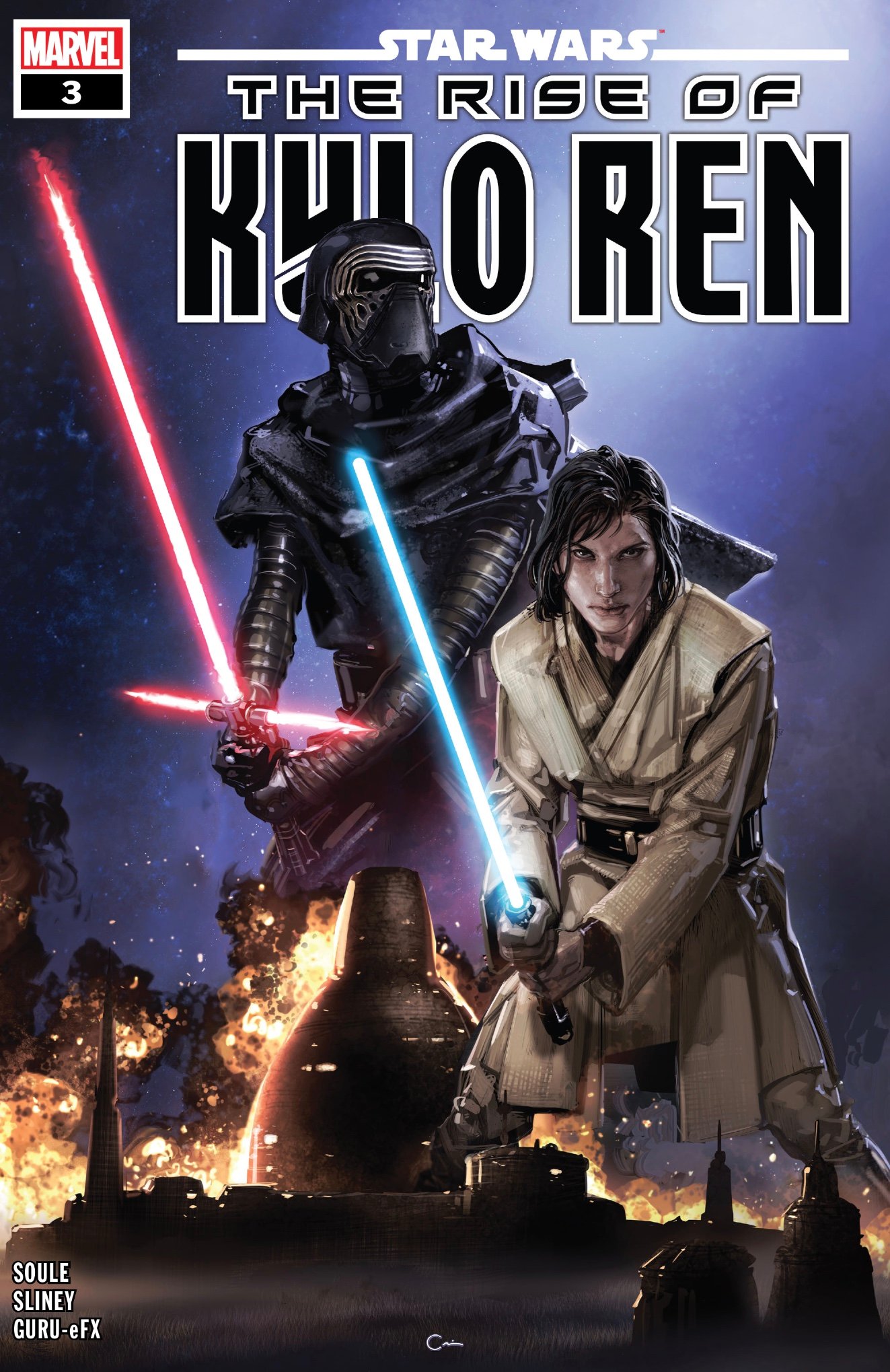 The Rise of Kylo Ren continues to remind us we knew pretty much nothing about Ben Solo and that many assumptions were wrong. So far, Ben has done everything he can to keep from harming the Jedi in pursuit. The Jedi want answers and Ben has none. Ben Solo wants to escape the shadow of the Skywalker legacy and find a new path in the Force through the only person he believes to be his ally – Snoke. If you’ve been reading along, the Snoke in this series is much different than the Supreme Leader of the sequel trilogy. Nevertheless, Snoke has taken Ben Solo under his guidance and helped him find the Knights of Ren. SPOILERS AHEAD…. 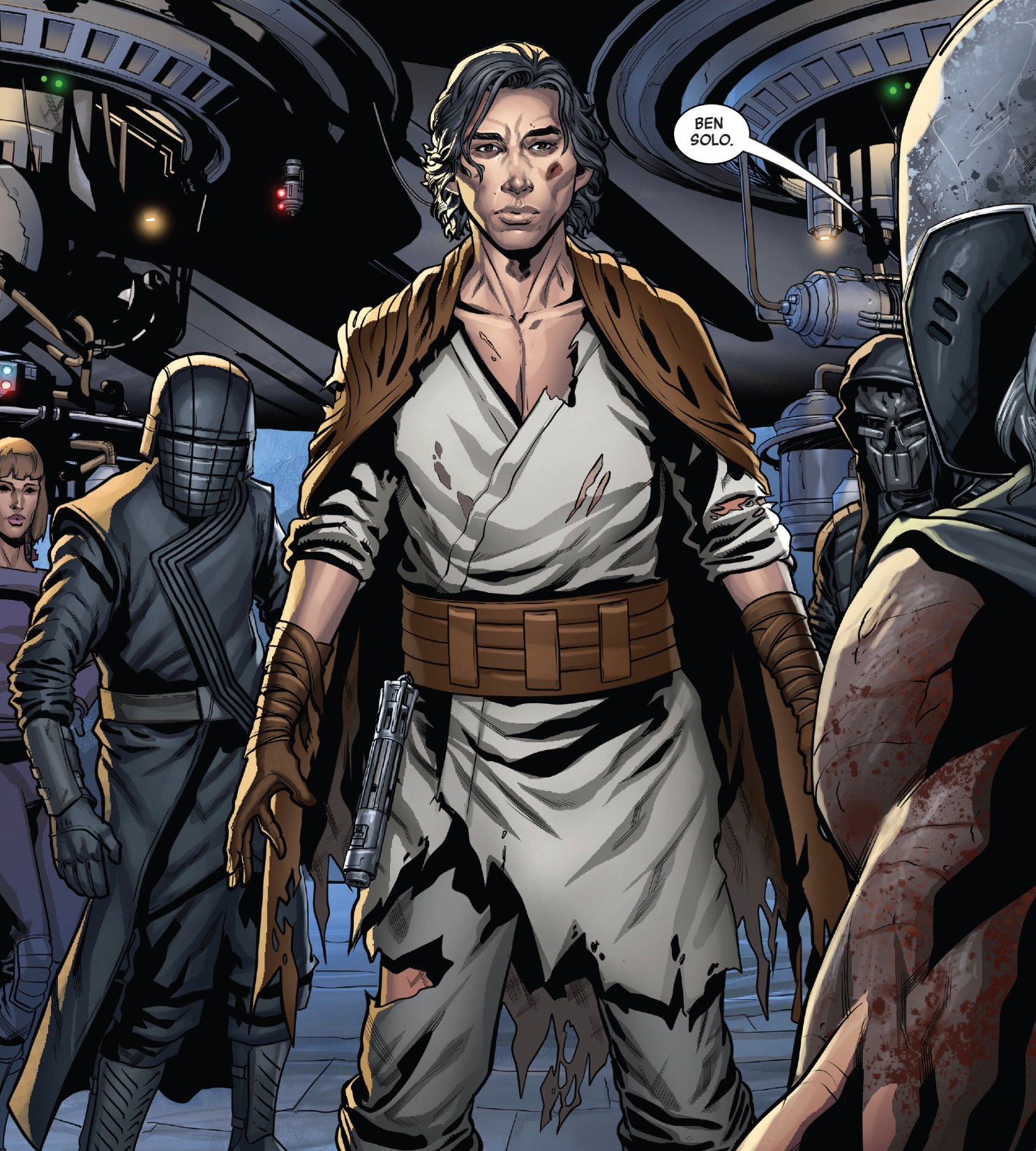 Ben Solo has arrived on a planet called Vanark to face the Knights of Ren. Their leader, Ren, seems to have been expecting him but is still unsure of what Ben wants from the Knights of Ren. It’s pretty simple: Ben just wants a teacher at this point. The sense of isolation he’s covered himself in is apparent, as much as his battered appearance reflects his emotions. When we last saw Ben Solo, he stood in a cave, prepared to face three of his friends who wanted answers about the destruction of their temple. We’ve time-jumped to after that moment, and as Ren tells Ben the price for joining the Knights of Ren is a “good death”, Ben declares he’s killed a Jedi. 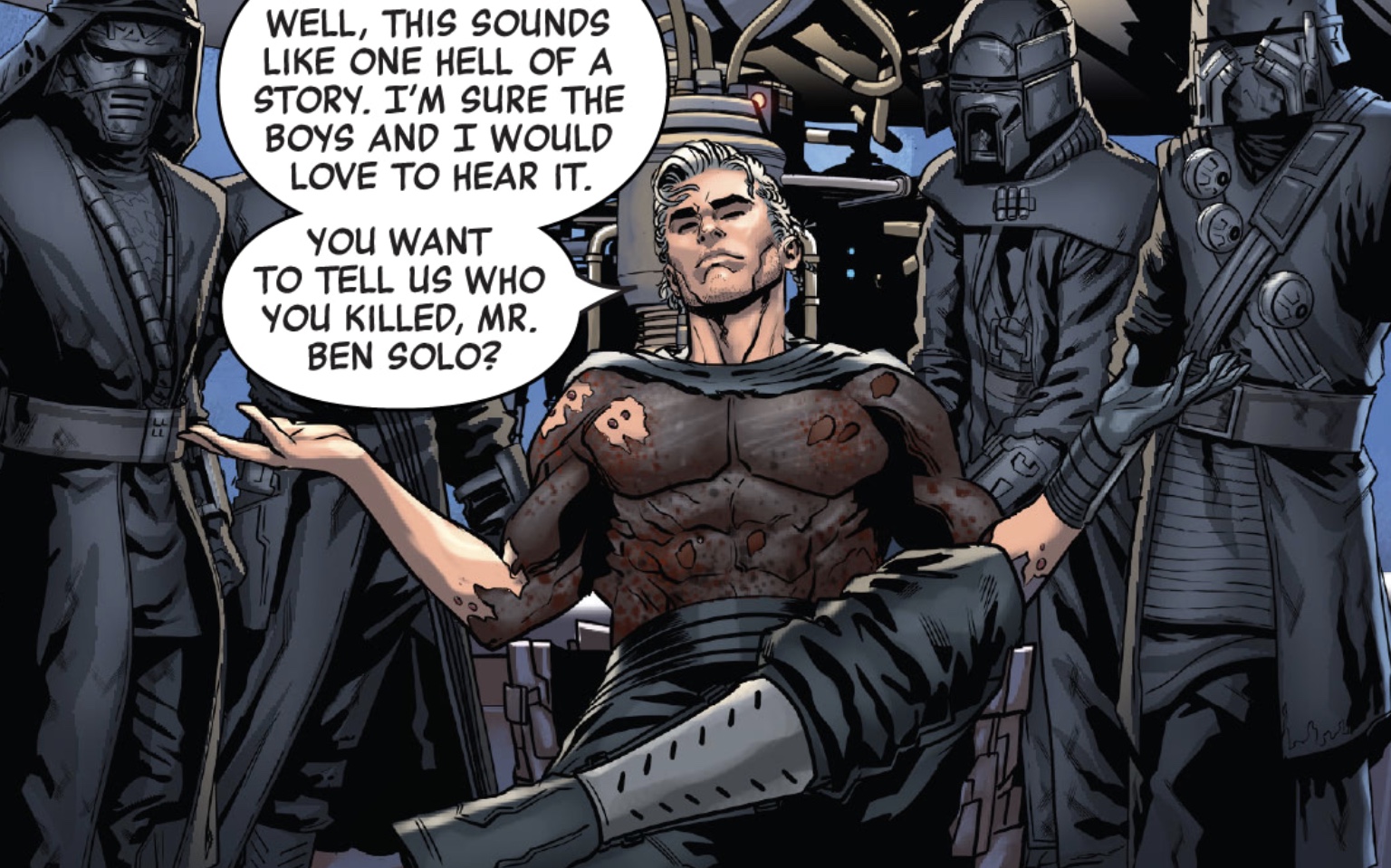 Ren assumes Ben claims to have killed Luke Skywalker, but when Ben refers to someone else, Ren needs to know who. Not only who, but why the death would be so meaningful to Ben. Ren and the Knights have already demonstrated their cruelty and I suspect they want Ben to dredge up the pain of killing someone close to him. We’ve seen Ben beyond this moment and know that even at his lowest, darkest point a murder for the sake of a master nearly destroyed him. Here, Ben’s very vulnerable, looking for answers, and the predator that is Ren seems eager to push his head back under the suffocation of self-loathing. Ben reluctantly agrees to tell Ren the tale. 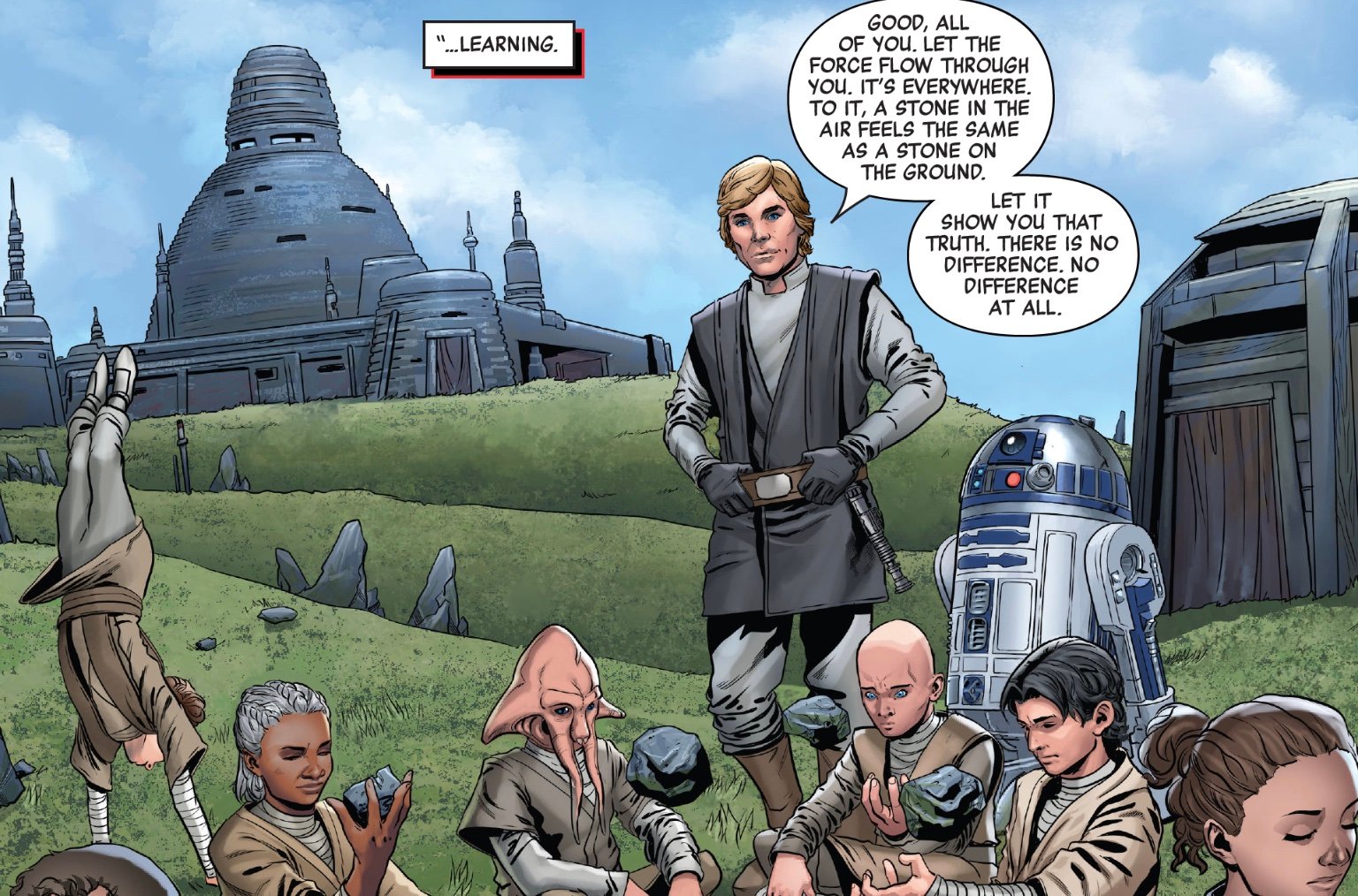 I’ve been hoping we’d get a look back at Luke’s training of these young Jedi. It looks like we are meeting them in their early teens. We know from Claudia Gray’s Bloodline that Luke took Ben exploring at a young age, but it’s still striking to think how much of his life he spent training alongside his uncle. To me, that underscores how devastated he must’ve been the night he woke up to a green blade hovering above his head. Not only did he spend a great amount of time with Luke, he spent it with the Jedi who ended up suspecting him of murder. Artist Will Sliney and colorist Guru e-FX contrast the usual dark tones of the series with these days of Ben Solo and his friends in the light.

Ben perceived a rivalry between he and Voe but I took more as confusion on her part about her friend’s natural strength in the Force. Luke provides a great metaphor, describing Jedi as “doorways” to the Force. Some doors open easier than others – and in Ben’s case, some are already open. Ben expresses to Ren that he felt like Voe always tried to size him up and beat him. He’s very empathetic to the perceived jealousy on Voe’s part (though I don’t think Voe was jealous or spiteful), expressing regret his abilities may have been a hinderance to her just accepting herself. However this friendship worked, it’s clear they had a bond through their desire to learn more about the Force.

Ben briefly describes Hennix, the Quarren, as someone focused on trying to decode the Force. We see Hennix in the process of activating a holocron, but Ben laments Hennix might have been better off living life instead of trying to decipher the Force. The friend who appears to have had the closest relationship with Ben is Tai.  Tai can sense the turmoil and self-doubt in Ben. The weight of the Skywalker legacy, with all it’s good and ugliness, would be a burden for anyone to carry. Luke and Leia had years to come to terms with it. Ben doesn’t even know the whole truth at this point but seems to struggle with his own identity and where he fits in. Tai tries to nurture his  shaky self-confidence and self-esteem, reassuring Ben to focus on the good person he can be and not get lost in the darkness coming for him. There is something dark inside Ben which Tai can’t sense but knows his friend is fighting. All Tai wants to do is be a friend to Ben Solo. Unfortunately, we’re seeing Ben slowly let go of himself as this issue proceeds, so these moments with Tai are as tragic as they are beautiful. 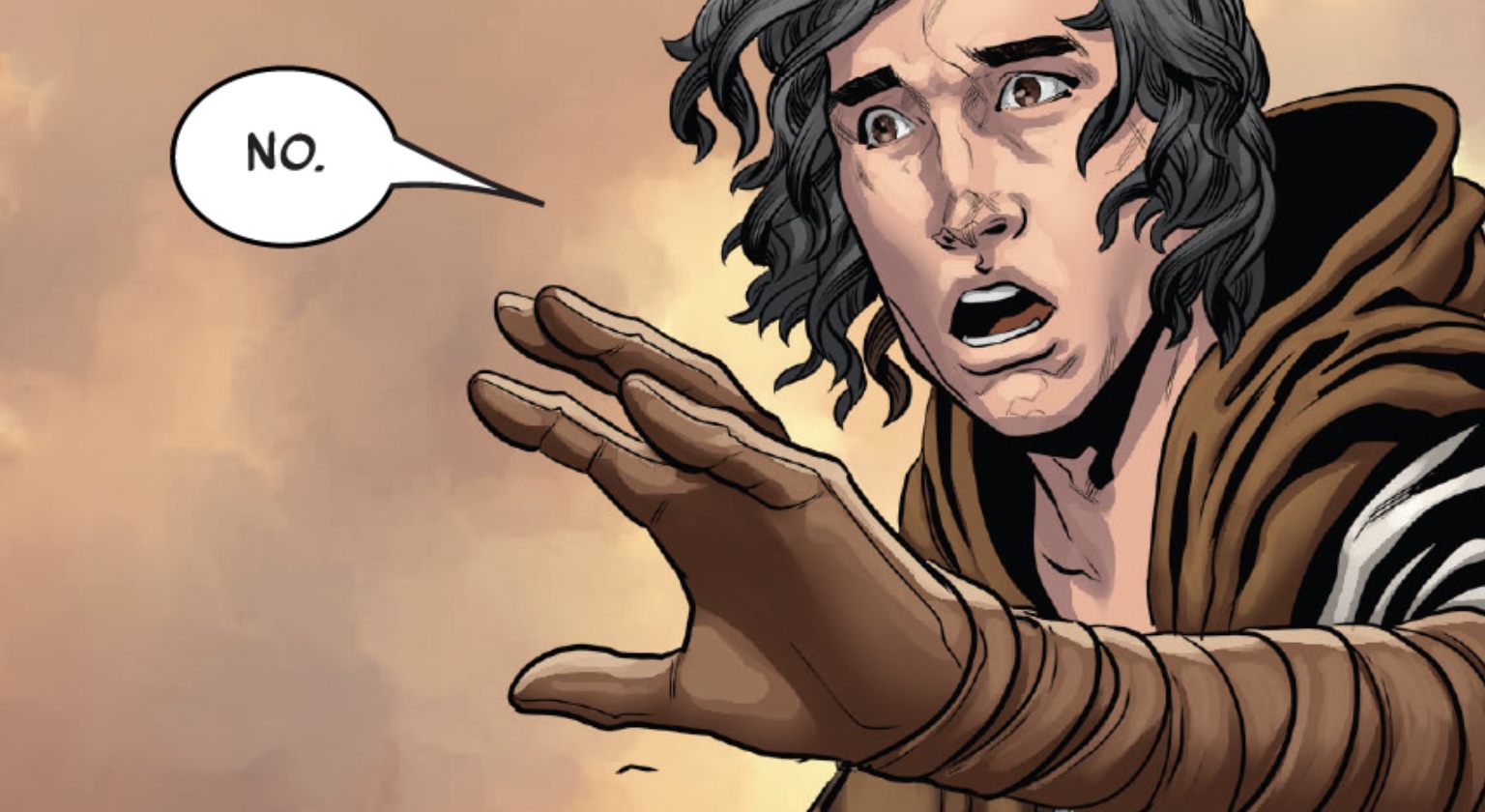 After Ren hears the history between Ben and the Jedi he wants to know more about their recent confrontation – the fight. When we rejoin them in the temple, Ben once again does everything he can to avoid fighting his friends. He urges them to stop following him. Voe is especially adamant about getting answers from Ben and accuses him of being a murderer. This accusation cuts Ben deep and his sadness turns to anger. As the two of them scale a cliff, Voe in pursuit of Ben, he violently pushes her away but quickly realizes the fall will kill his her. Ben takes hold of her through the Force, keeping her in mid-air, but Hennix has just arrived behind him and believes Voe to be murdered. Hennix tosses his ignited lightsaber at Ben, who struggles to keep hold of Voe as he uses the Force to deflect it back at Hennix, killing him. Voe falls again, but Tai uses the Force to help break her fall. Quickly after, Ben rejoins them on the ground and urges them to get inside the temple. Just as they ask about Hennix, Ben uses the Force to pick them up and hurtle them into the temple. 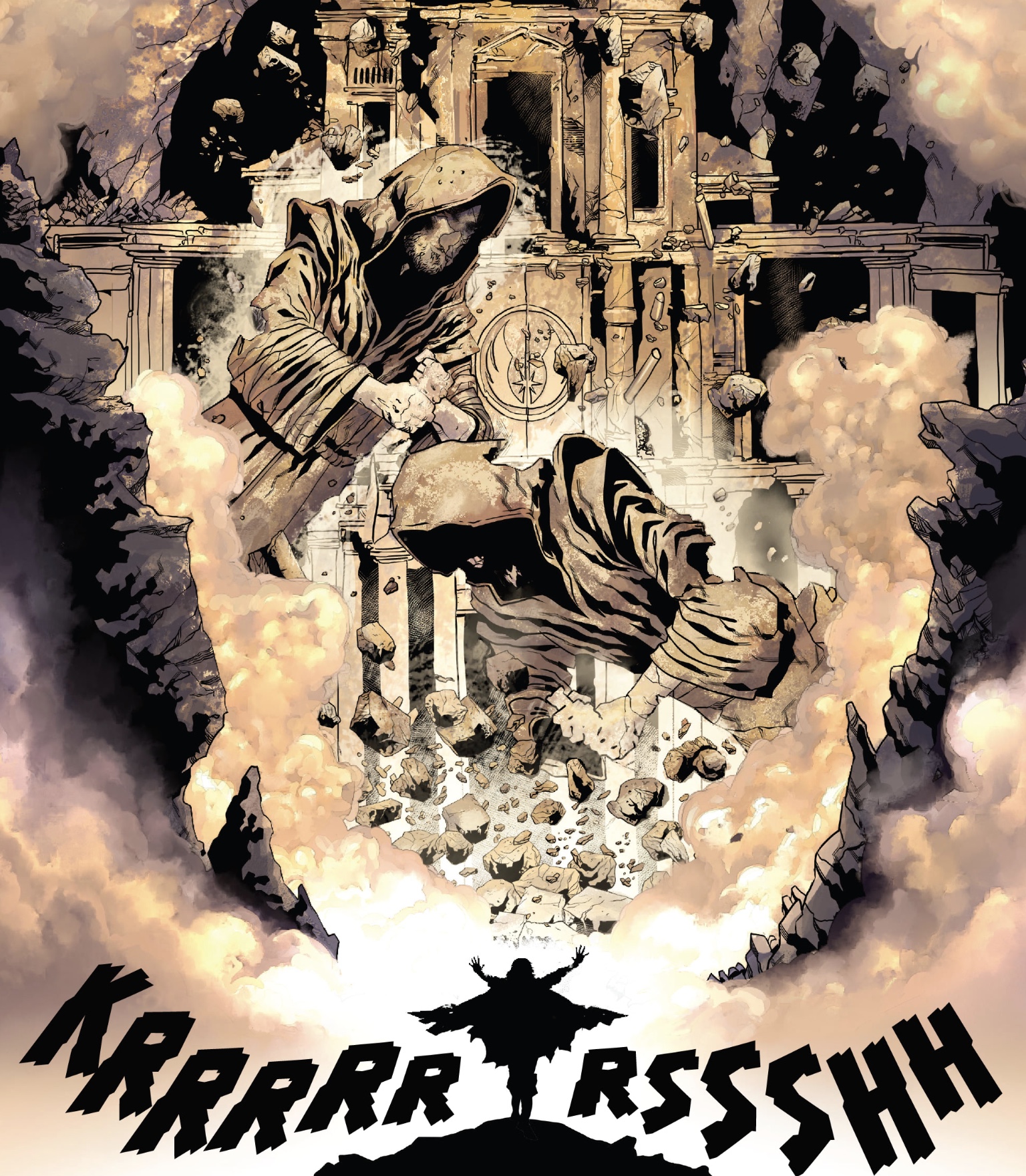 At this point, Ben seems to be protecting them from himself. He’s in shock that he just killed Hennix and knows he can’t keep defending himself against Voe and Tai without someone getting hurt. So Ben brings down the entrance of the temple, leaving Voe and Tai inside, in an attempt to slow them down. When we return to Ben recounting this to the Knights of Ren, Ren himself seems unimpressed. Secretly I think he is intrigued and excited about Ben’s potential in joining them but he certainly doesn’t show it. He actually puts Ben down but says since Snoke supports Ben they’ll allow him to join. 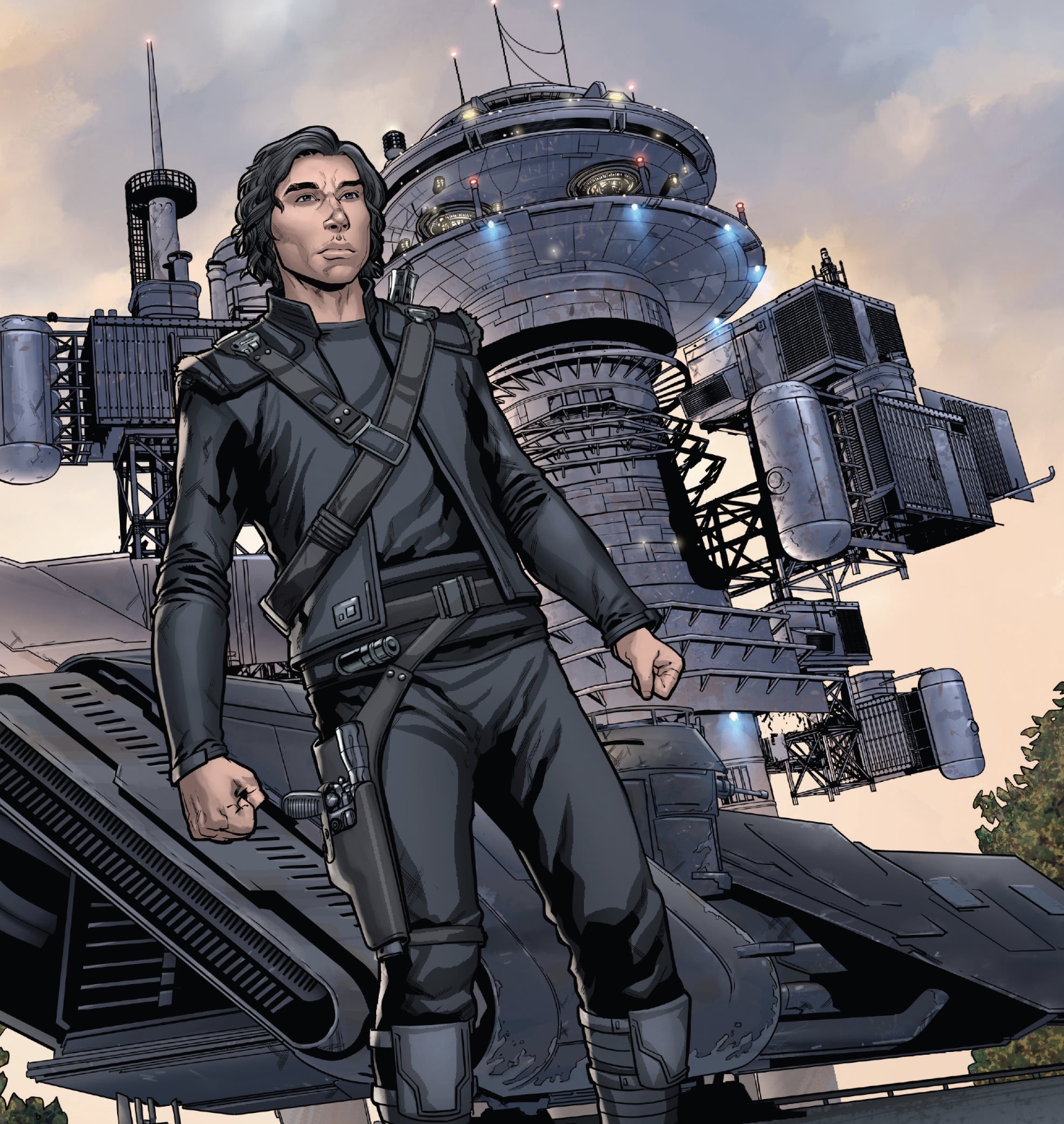 The rise of Kylo Ren begins, with Ben Solo donning this new look, courtesy of the Knights of Ren. Wow! A dark Han Solo if I’ve ever seen one. Part of me wants to think this was intentional on Ben’s part, still trying to hold on to some connection to his father and family. Also reminds me a bit of Luke’s look in the Star Wars Marvel series, specifically the early issues. Leia’s strength in Ben’s stance and how he holds himself here is very much present. There’s nothing accidental about Will Sliney’s design here, it both embodies the family legacy of Solo/Skywalker/Organa and hints at darker times to come. A brilliantly ominous and striking visual portrayal, in my opinion. 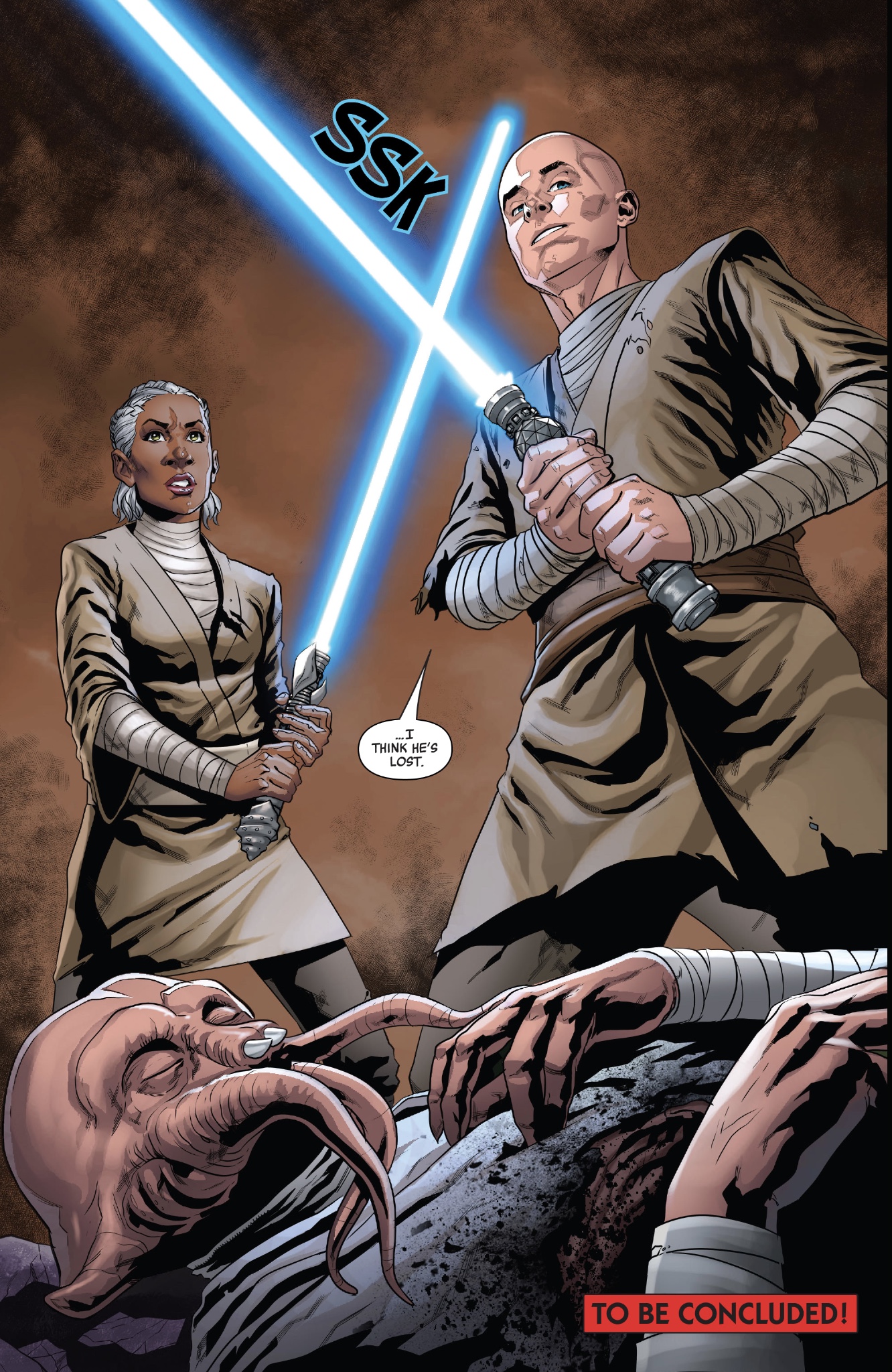 After discovering the corpse of Hennix without the context of his death, they believe Ben to be a murderer. This likely serves as a misguided-confirmation of Voe’s suspicions of Ben’s responsibility for the destruction of Luke’s temple. The death of their friend is a bridge to far and Ben loses a few more of the few people who believed in him and loved him.

Writer Charles Soule has shown the utmost respect and empathy while writing about Ben Solo. He probably could’ve done anything he wanted, but he gave us an intimate story about the insecurities and sadness which can sometimes lead good people to do bad things. I’m so moved by this story and it further underscores the tragic end Ben Solo met in The Rise of Skywalker. Whatever your opinion of the film, it’s hard to argue there’s not a great deal of sadness in Ben’s death, just as he rediscovered the good person we’re seeing him lose in The Rise of Kylo Ren. Artist Will Sliney and colorist Guru e-FX also contribute some of the finest art I’ve had the privilege of seeing in the Marvel Star Wars line-up. There’s a reason the previous issues in The Rise of Kylo Ren continue to sell out (this issue sold out, as well) – it’s one of the best series we’ve had so far and a wonderful tribute to a complicated character who continues to surprise us. 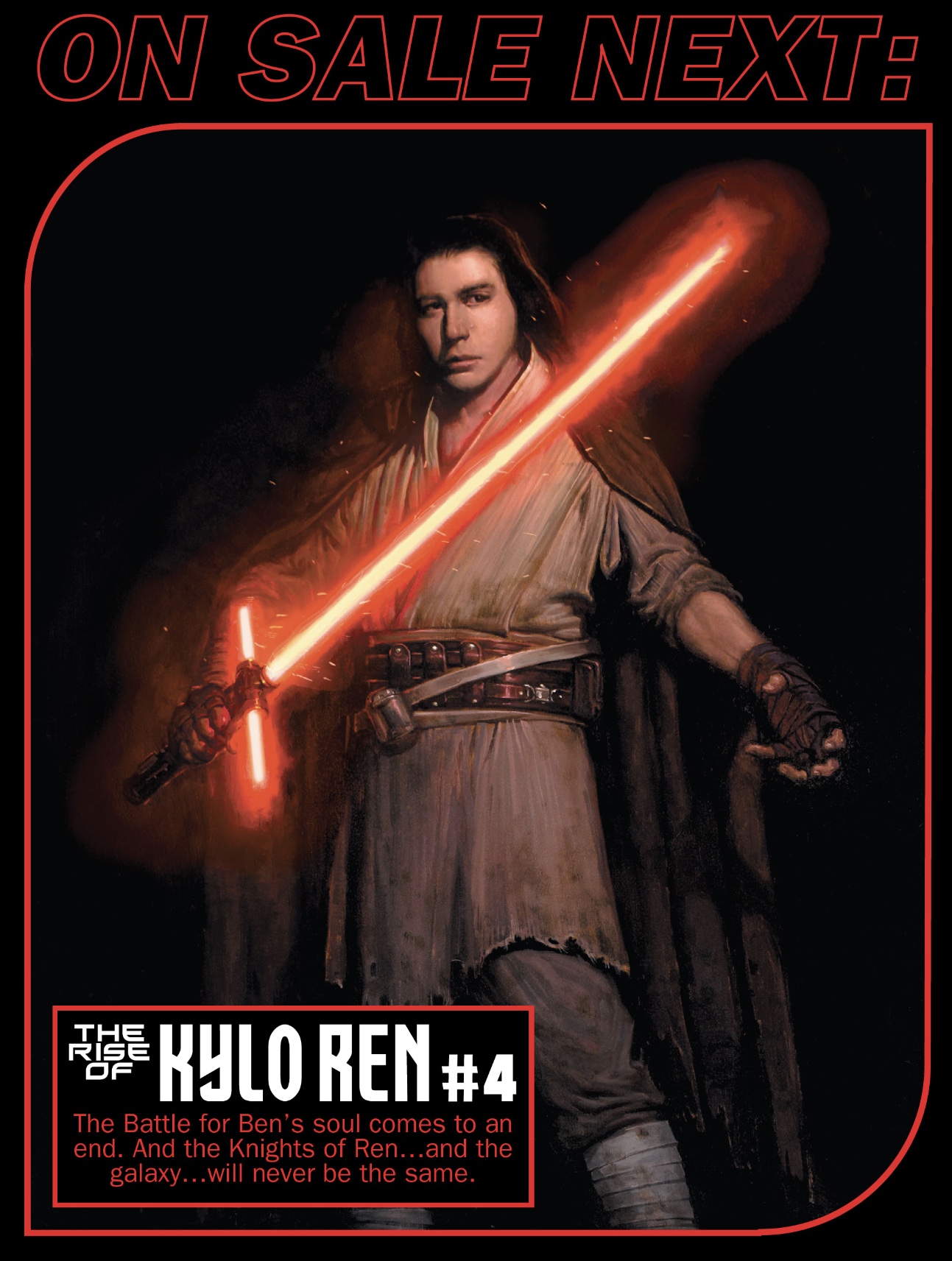 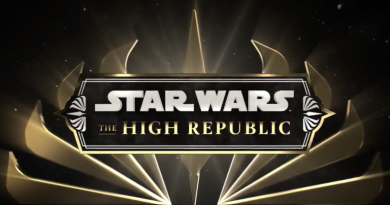 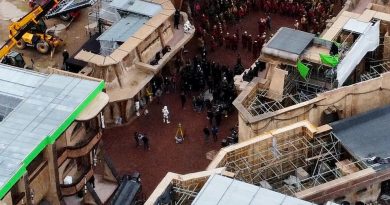 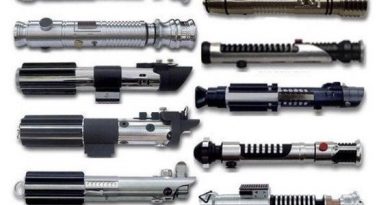 Editorial: Lightsabers, Their Users and Their Uses