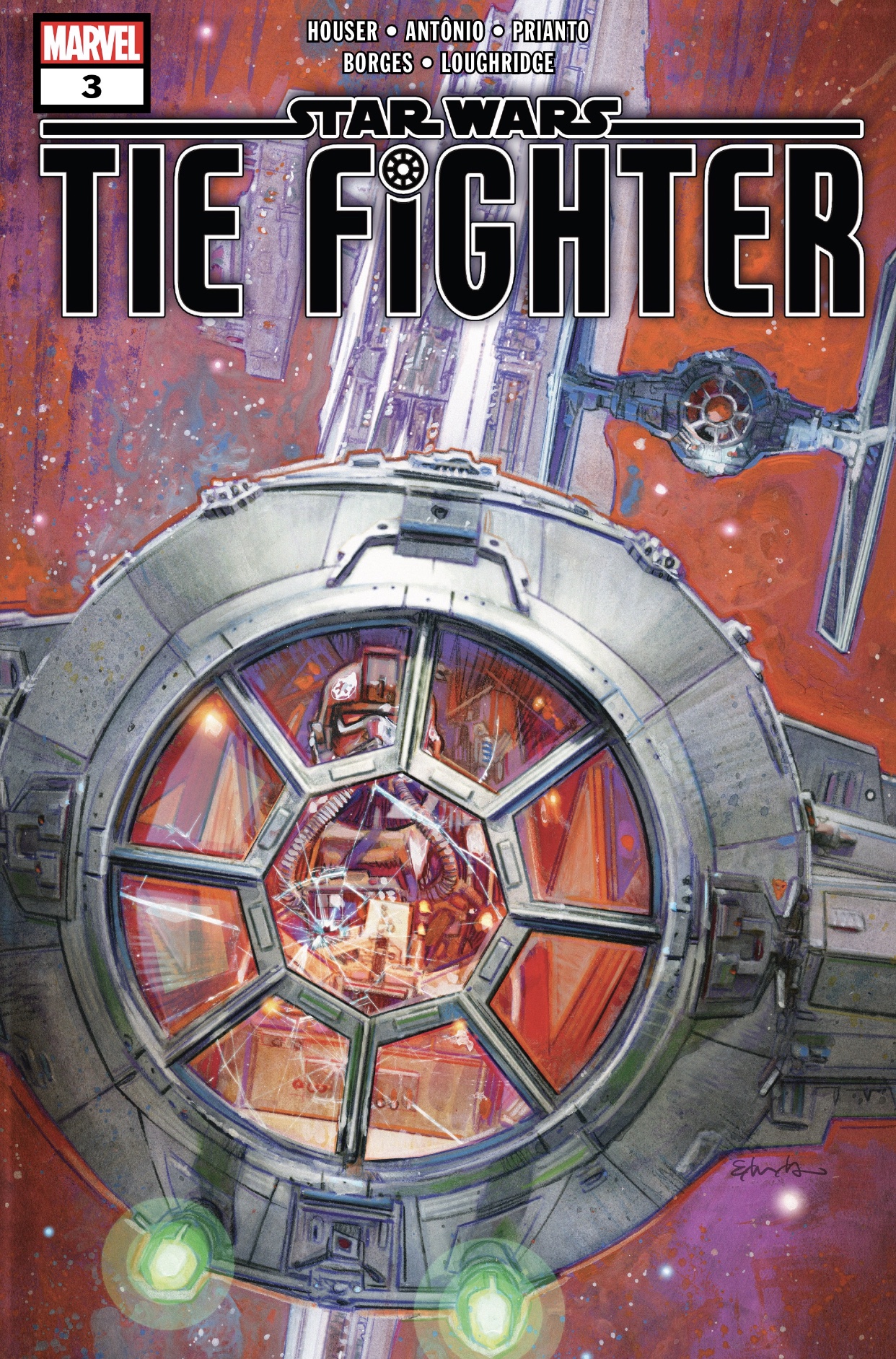 With the publication of Alphabet Squadron behind us, it’s time to turn our attention back to the pilots in Shadow Wing in TIE Fighter #3 in this Marvel/Del Rey crossover. The first two issues of this series have been great, Alphabet Squadron left the door open for a lot more stories, and this third issue heightens the action and contains an appearance from a potentially major character from Alexander Freed’s novel and the subsequent sequels in the planned trilogy. If you haven’t read Alphabet Squadron yet, you should probably hold off reading this review (or read our non-spoiler and spoiler reviews) because there’s no getting around discussing a certain character. Needless to say, SPOILERS AHEAD…. 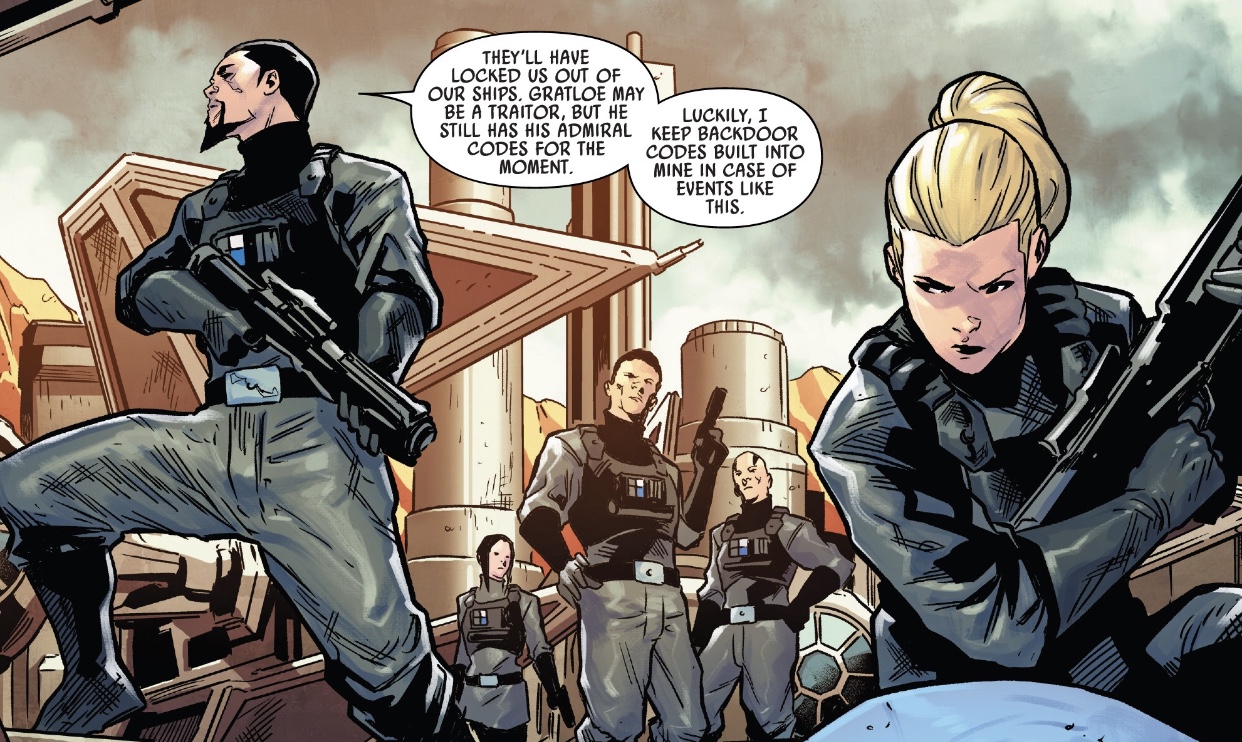 Before we get into the crossover related details of this issue, let’s catch up with Shadow Wing. The squad has been dispatched to the Kudo system to locate the Star Destroyer Celerity, which had gone silent. Imperials are trying to cling to whatever ships they can find, so a derelict Star Destroyer could make all the difference in the midst of the late Emperor’s Contingency. Because of the events of Alphabet Squadron we know Shadow Wing’s commander, Colonel Nuress, is consolidating all of her resources and preparing to head to the planet Pandem Nai to help fortify an Imperial stronghold and control hyperlanes. What Shadow Wing didn’t count on is the corrupt admiral called Gratloe who’d use his scraps from the Empire to enrich himself and sell resources to the highest bidder. Upon arrival in the Kudo system, Shadow Wing was ambushed, their transport destroyed, and taken prisoner by Admiral Gratloe. At the conclusion of the previous issue, they’d escaped their holding cell and have taken back the Imperial facility. For the moment. When a squad of stormtroopers brings them to a halt, they have to convince the bucket heads to realign their allegiance to the Emperor’s contingency and it really doesn’t take much convincing. The troopers admit they realized all along Admiral Gratloe was a grifter and are willing to rejoin their fellow Imperial officers. There is one problem, though. 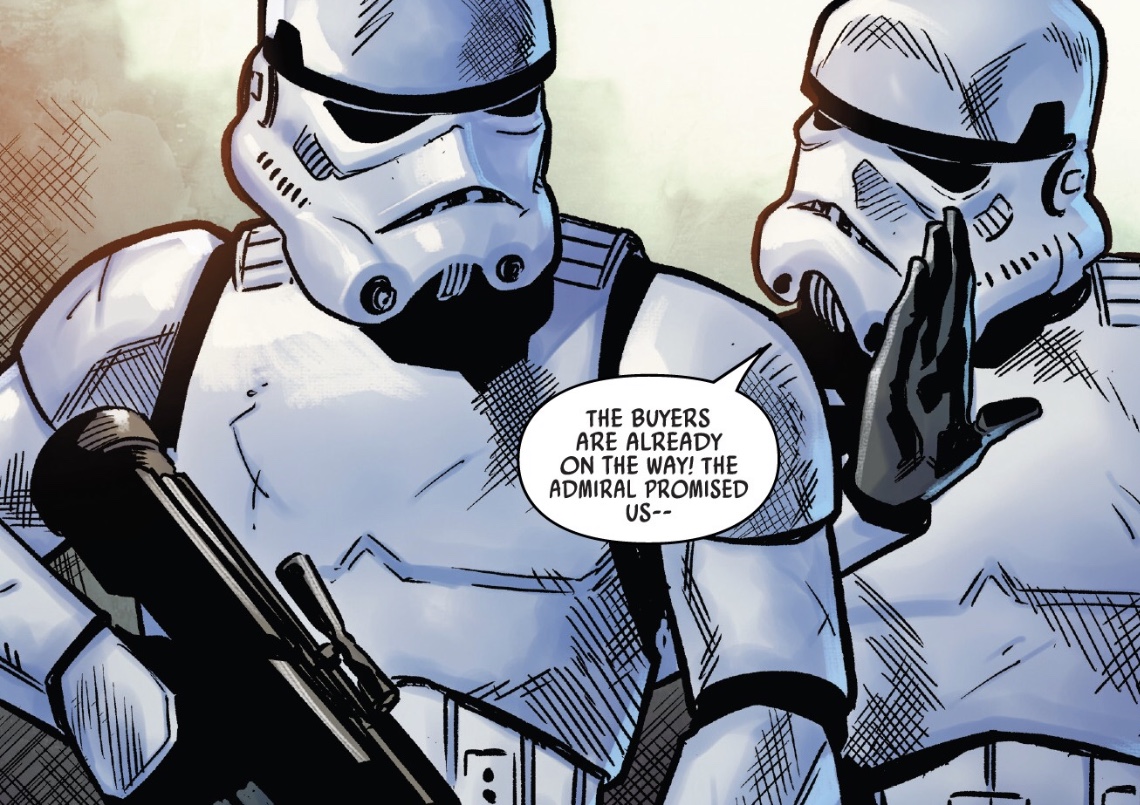 Admiral Gratloe already has an arrangement with someone and they are on their way to purchase something from him. My bet is Gratloe intended to give up the officers of Shadow Wing. From reading Alphabet Squadron, the New Republic is anxious to shut Shadow Wing down and getting these pilots would be a huge victory for them. Whether it’s to a bounty hunter the New Republic hired or direct contract, you can bet Gratloe knows a few Shadow Wing pilots are a hot commodity in the galaxy at this moment. 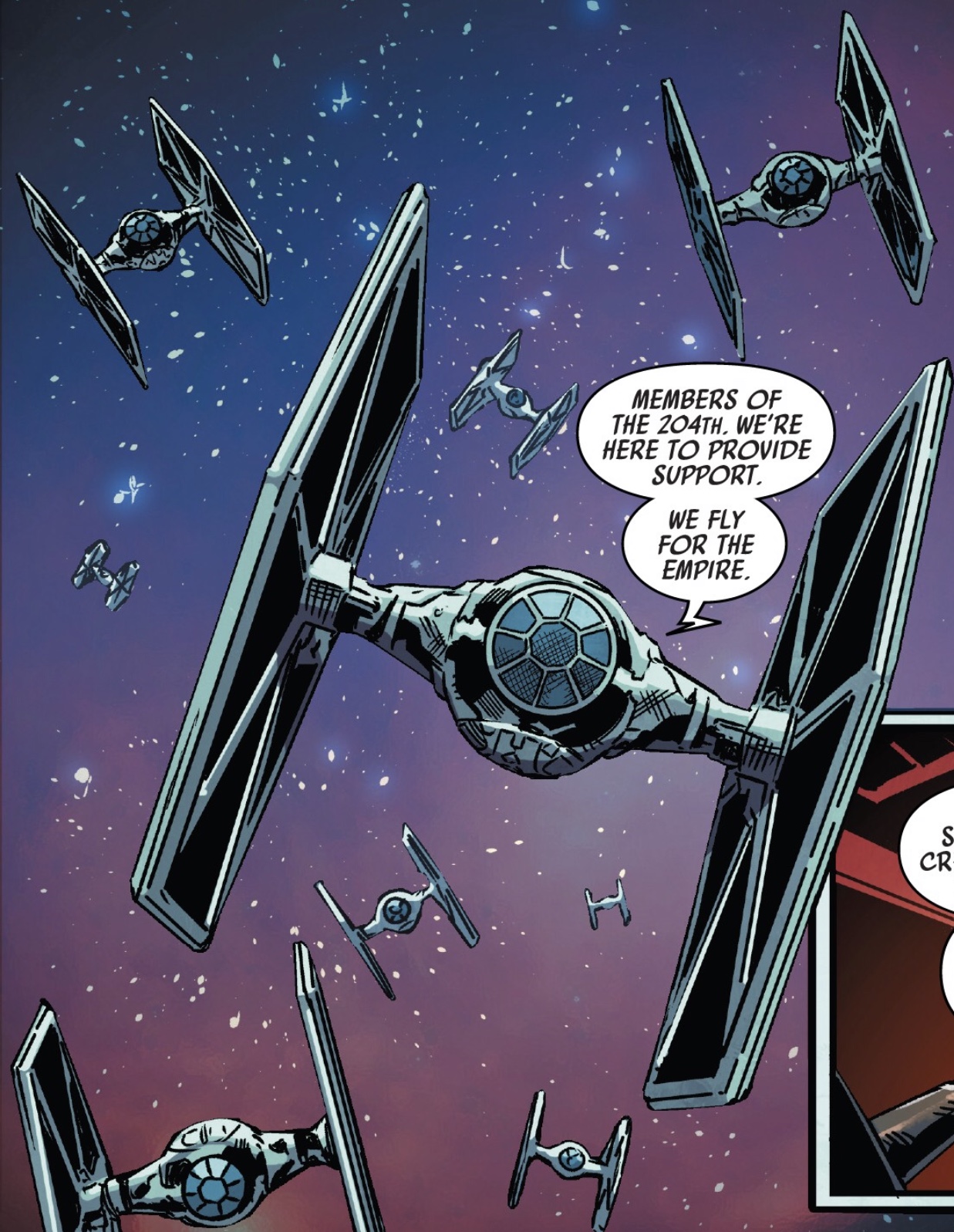 Not only have the stormtrooper turned back their allegiance to the Empire, the TIE Pilots who originally shot them down have come around as well. Shadow Wing has been made aware that a buyer is one their way but they have no idea who it is. There is still a contingency of Gratloe-loyal stormtroopers aboard the Celerity, but we see they are in the process of being subdued from a few frames showing the firefight in the hangar and corridors. The Empire is an absolute mess after the destruction of the second Death Star, but they’re still breathing and still very dangerous, despite the fact it’s servants are tearing it to pieces due to this type of infighting. As Shadow Wing approaches the Celerity, determined to support the Imperial loyalists aboard, the mysterious buyer shows up and no surprise, it’s a squadron of X-wings.

The Rebels are more concerned with taking the mining facility, which appears to be what Gratloe promised them. Shadow Wing does their best to evade them but the Rebels brought a large squad, knowing they’d need extensive personnel to occupy the Imperial outpost. The pilots decide to make for the Star Destroyer, since that’s what they’d been tasked with. Shadow Wing know their Empire needs ships badly, so they are determined to get to the ship and run. There are some pretty awesome frames of dogfighting in these pages. It’s great to see Shadow Wing in action after hearing so much about them in Alphabet Squadron. This is the first battle in TIE Fighter where they’ve really been tested. The art by Rogé Antônio and Geraldo Borges, complimented by colorists Arif Prianto and Lee Loughride, brings me back to the classic space battles of Star Wars. This issue moves very quick and I’m just fine with that. Not every pilot in Shadow Wing makes it. Lytan, who we’ve known since Solo: Imperial Cadet, and Zin Graw, the relatively new member of the group, die in the battle as the others make it to the Celerity. 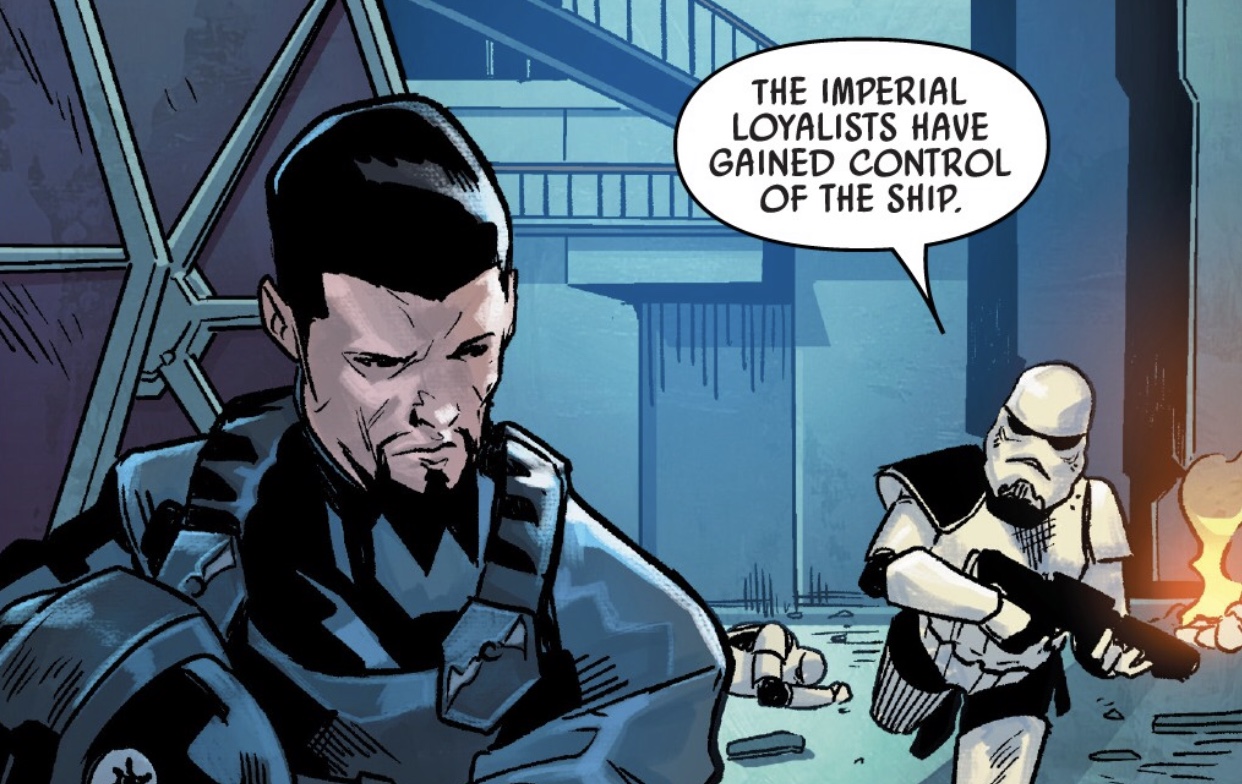 Shadow Wing manage to land aboard the Celerity, but the ship is in pretty bad shape. There are dead stormtroopers everywhere in the hangar, damaged ships, but the loyalists control the ship. Squad leader Teso Broosh gives the order to enter hyperspace and Shadow Wing have escaped. They paid a pretty steep price and they are well aware.

Ganem Kahi is especially affected by the deaths because his partner was Graw. There’s not much solace anyone can be offered in this time of war. In case you’ve read Alphabet Squadron (or if you haven’t), this series takes place before those events and I’m pretty sure we are meeting a contingent of officers who didn’t survive. Shadow Wing is technically the 204th Imperial Fighter Wing and there are actually six squadrons that compose the nightmarish fleet. These officers represent only one of six, so it’s a good bet this series depicts their demise. With each issue they seem to grow more and more weary of the combat and the undying loyalty to the Empire that’s expected of them. I thought this silhouette said it all when it came to the emotional state of Shadow Wing’s pilots. The current events end here and as with each issue so far, we suddenly jump back in time, exactly six months prior to these events.

One last time…if you’re planning on reading Alphabet Squadron and want to approach the novel spoiler-free, you’d do well to stop reading this review now or just scroll down to the rating. You’ve been warned. 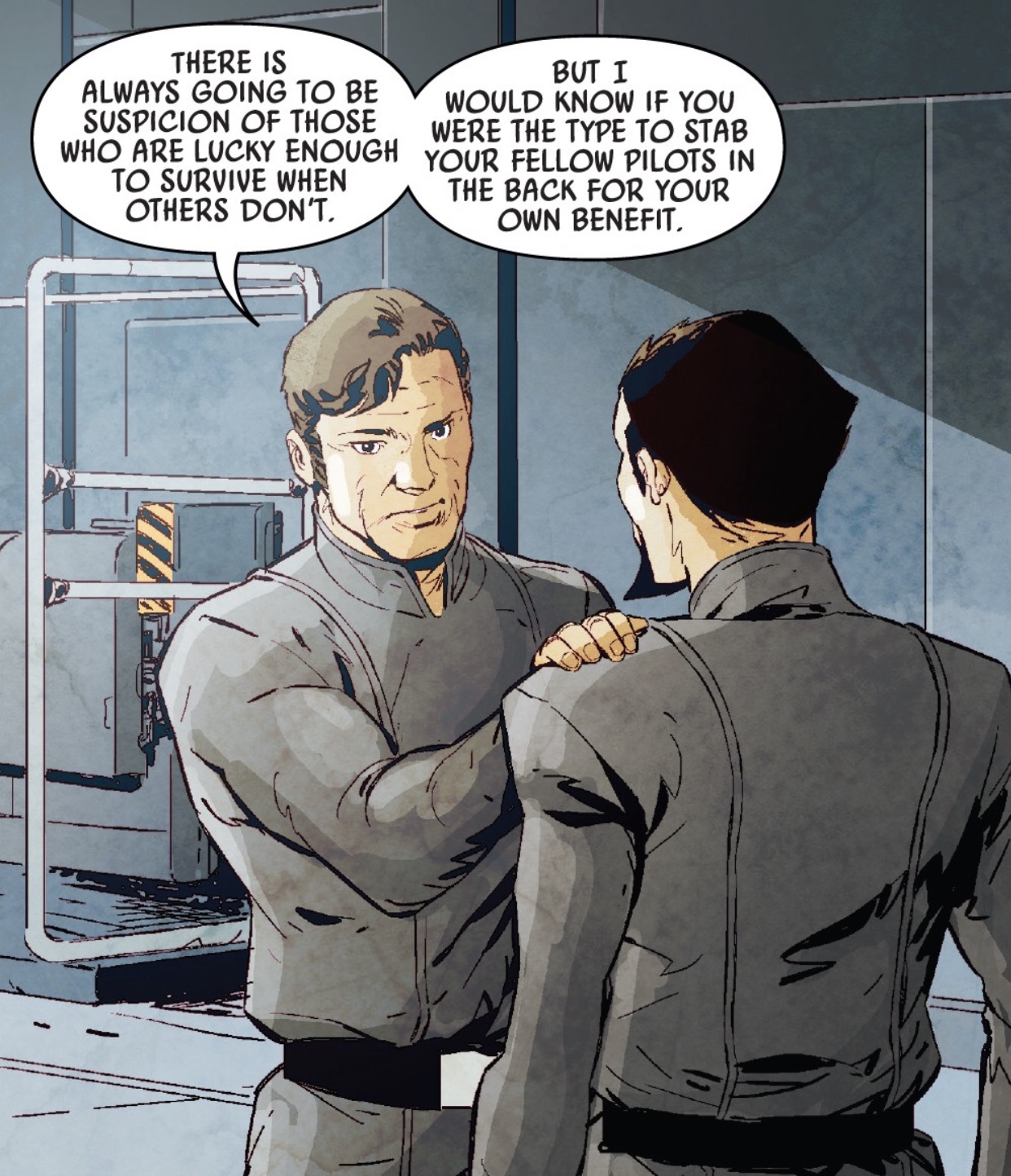 Meet Major Soran Keize. He’s not in Alphabet Squadron much but his presence is huge. He was a mentor and leader to the novel’s protagonist, Yrica Quell, and is presumed dead throughout the novel. Despite his absence, Quell mentions he loomed large over Shadow Wing and her development as Imperial officer. Keize was also known for his more pragmatic outlook in the galaxy, not necessarily vilifying the Rebel Alliance, but trying to understand them. That said, it’s pretty huge to see him show up here to speak with Broosh. He informs Broosh that he’ll be taking over a squad of his own, but the young commander is reluctant to carry the responsibility of his subordinates lives. Keize sees this as an admirable quality, considering the Imperial hierarchy is a cesspool of conniving officers always trying to get ahead. Keize assures Broosh he has what it takes and the issue ends with the commander accepting his new assignment.

I was very excited to see this crossover event begin to merge. We don’t know where Shadow Wing is headed after their jump from the Kudo system but if I had to bet it’s somewhere near Pandem Nai. We shall see!

Writer Jody House continues to deliver the gold standard in Star Wars stories. I’m so grateful she’s handling this, especially considering her extensive work on Thrawn, Rogue One, and Age of Republic. I really couldn’t think of a better writer to tackle this story and she’s certainly delivered some excellent issues. This is my favorite, by far. As I mentioned earlier, the artwork is stellar and highlights the tempo. TIE Fighter could be a series all it’s own but it accompanies Alphabet Squadron very well. I hope everyone who’s come along for this crossover event is enjoying it as much as I am. 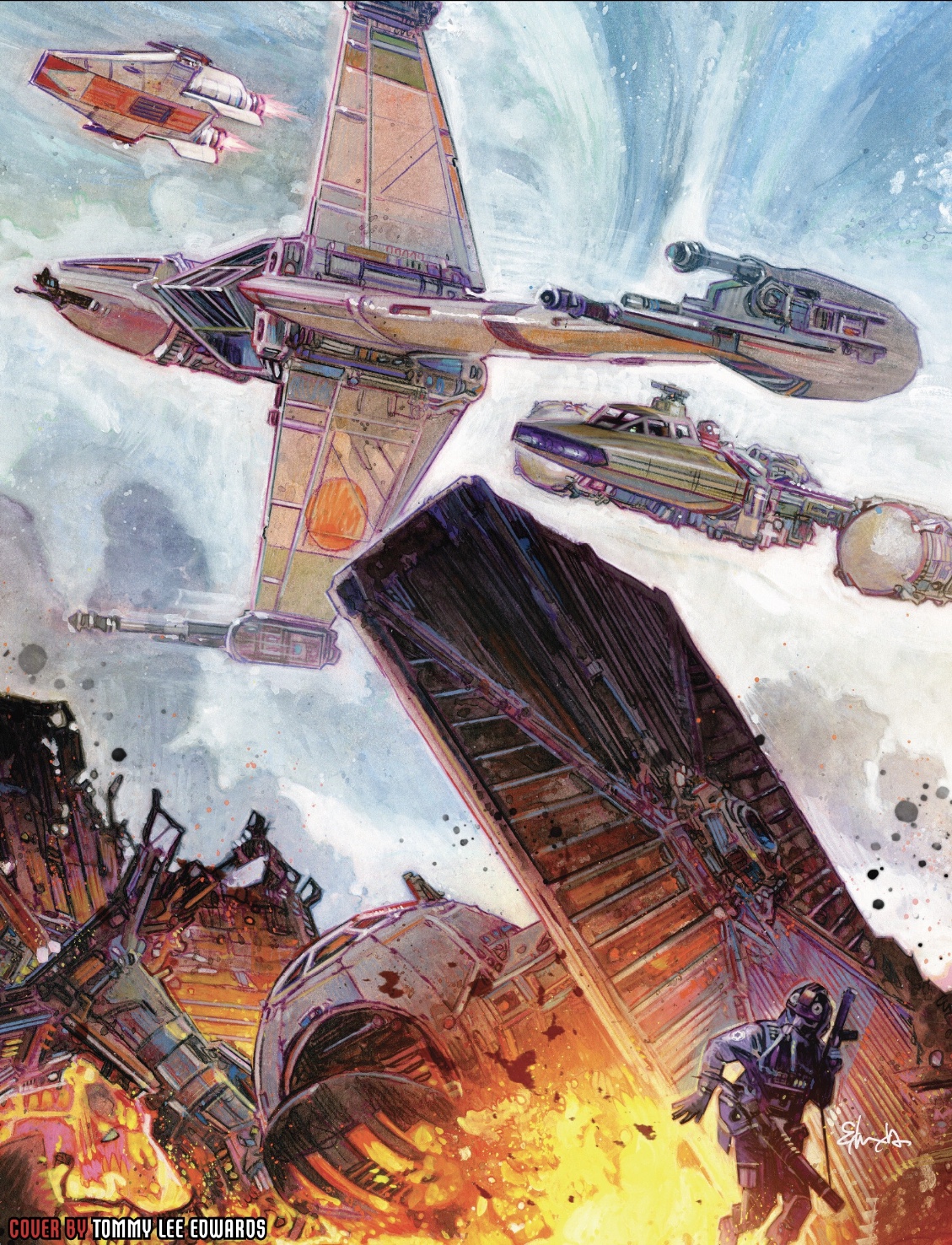