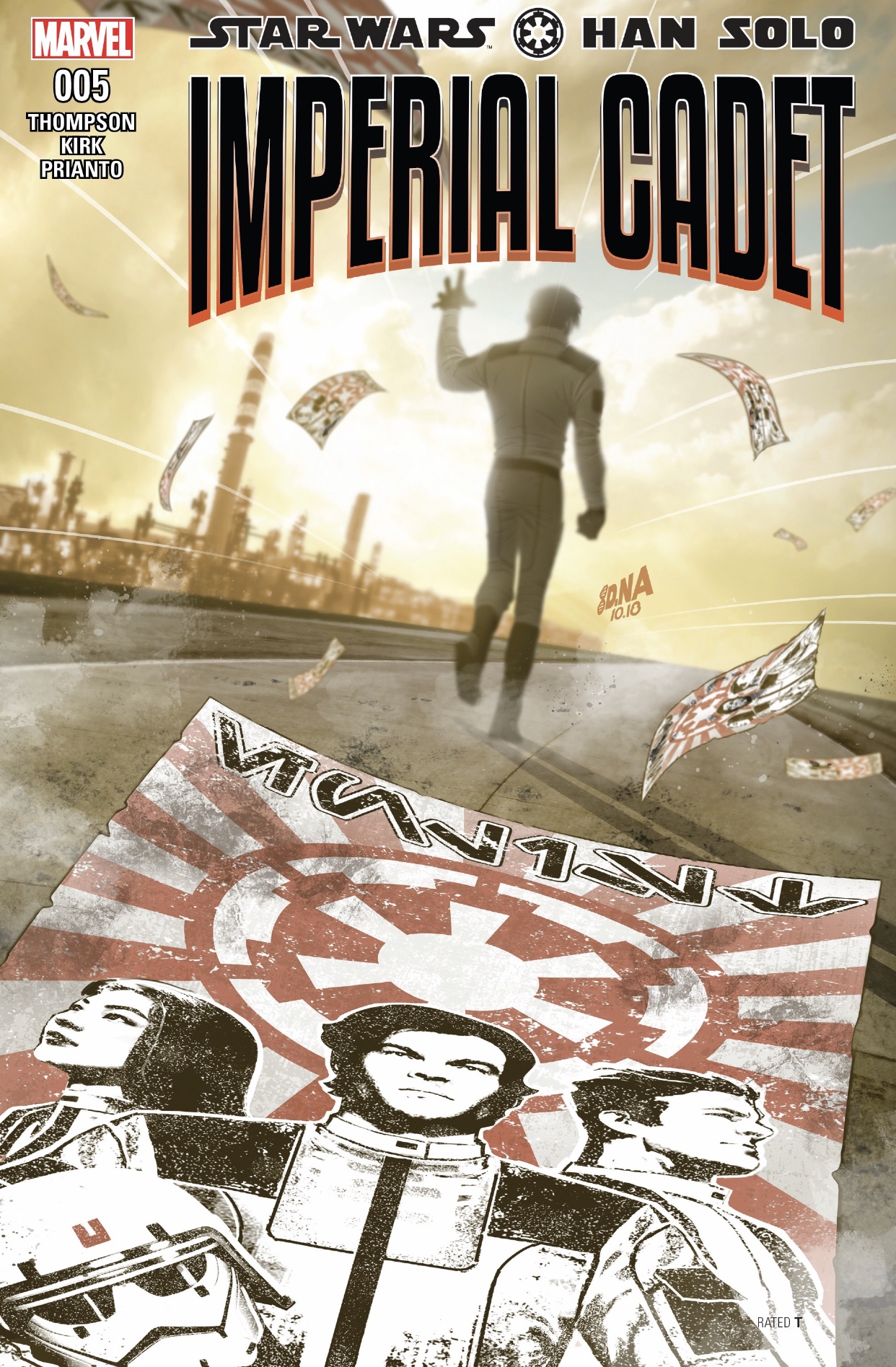 Han Solo and his fellow cadets are in the midst of their first mission, but it’s not going the way they or the Empire hoped. This incredibly fun series by Robbie Thompson has come to an end. The galaxy’s favorite scoundrel is out of the academy and finding out he fled the oppression of Corellia and ended up in something far worse – the Empire. If you’re a fan of the character and Solo: A Star Wars Story, this series has served to add another layer to the rich history of Han Solo. SPOILERS AHEAD….

The squad lost one of their own in the previous issue. As selfish as Han pretends to be, he leads the charge to find Valance and bring him to safety. This is not standard Imperial procedure, but the squad goes along. Very nice touch with the TIE Pilot uniform on the speeder bike. I often fail to appreciate how cool this armor is and it looks great here. The speeders are trying to evade the Qhulosk insurgents the Empire has come to put down. The squad doesn’t know they might bigger problem than local fire, they’re on the same run that’s about to be lit up by TIE Bombers.

This frame brought me back to Inferno Squad. So far, most of the Imperial stories in the comics have been great. Some of it has been tragic, other times it serves to remind us there were many who signed up for the Empire not knowing what they were. Some came to accept that, others left. Robbie Thompson continues to keep our finger on the pulse of these cadets. We know where Solo stands but something seems to be shaky in the others. Whatever their destiny, they’ve risked a lot to locate their downed pilot Valance. They locate him, but Valance is badly wounded and the local insurgents have caught up with them. 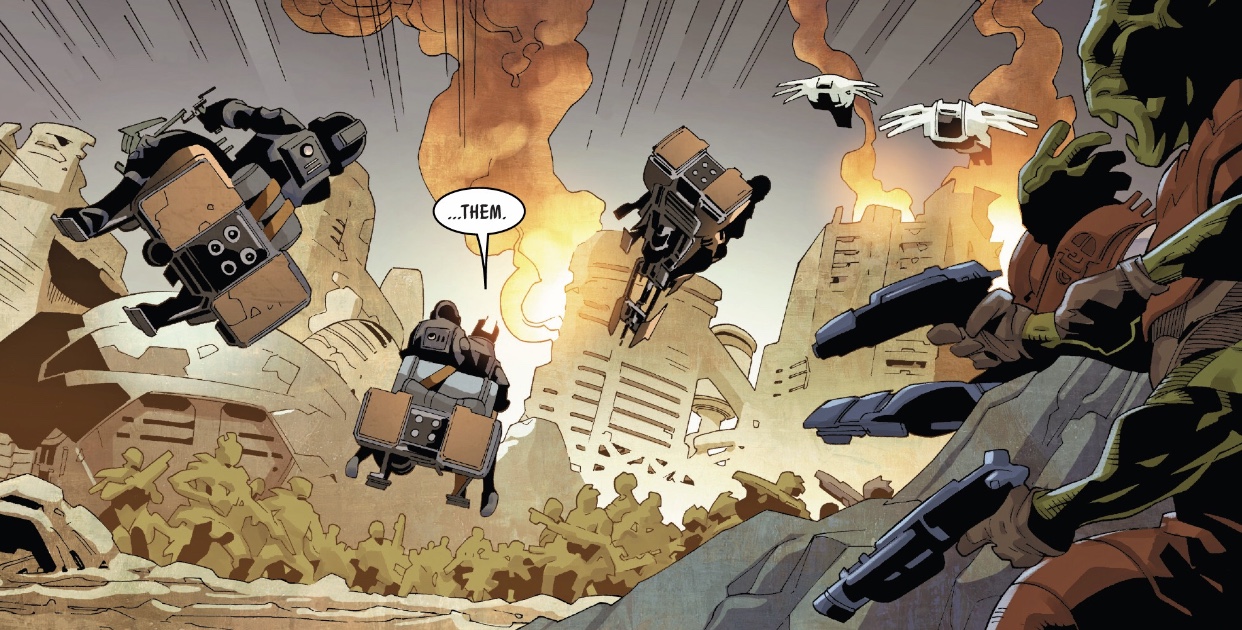 The Qhuloskians outnumber and outgun the ragged group of Cadets who don’t have anywhere to go. They definitely put up a fight, but they corner the Imperials.  There have been some fantastic action sequences in this series and this issue certainly contributes. Every frame is very brilliant and feels like you could expect a J.J. Abrams-style lens flare as the blaster fire flies between speeders. The artist team lead by Leonard Kirk gave us a lot of sights to take in and these fast-paced sequences certainly showcase their strength.

Instructor Nakan has his orders and is ready to lead a run of TIE Bombers across the city. The cadets are on their own. I’ve had my suspicions that Nakan really admires Solo since he sees so much of who he used to be in the young cadet. This issue seems to confirm the opposite: Nakan can’t stand Solo. I don’t think it’s so much his defiance to authority, but more of Nakan despising who he used to be and Han reminding him of it. There’s a strange melancholy in Nakan that’s kept my interest in the character.

Just as the Qhuloskians are about to wipe-out the cadets a barrage of fire erupts behind them, taking them all out. Meet the Ghulars, slaves no longer, who have taken up arms against their oppressors. The Ghulars are under the heel of the Qhuloskians because of a rare ore called farium. As we know, somewhere in the galaxy the Death Star is under construction and the Empire is building up their navy, which is why the massive consumption of planetary resources seems to be a common thread in most Imperial encounters of this era. The mention of farium brings a bleak realization for one of the cadets. The plight of the Ghulars is not a common sight to them yet and it should serve as a sign for what’s ahead if they continue to follow the Empire. For someone, it is.

Kanina remembers her planet also contains large quantities of farium and that means the Empire will soon turn their sites on it. Remember, where Han is trying to get back to Qi’ra, Kanina is trying to get back to her love, Weegee. The thought of her planet and Weegee enslaved drives Kanina to question the Empire. Kanina realizes she can longer fight for the military behemoth if it required turning on her own people and those she loves. She expresses that she feels trapped, so Han takes her helmet off and blasts a hole through it, effectively faking Kanina’s death. 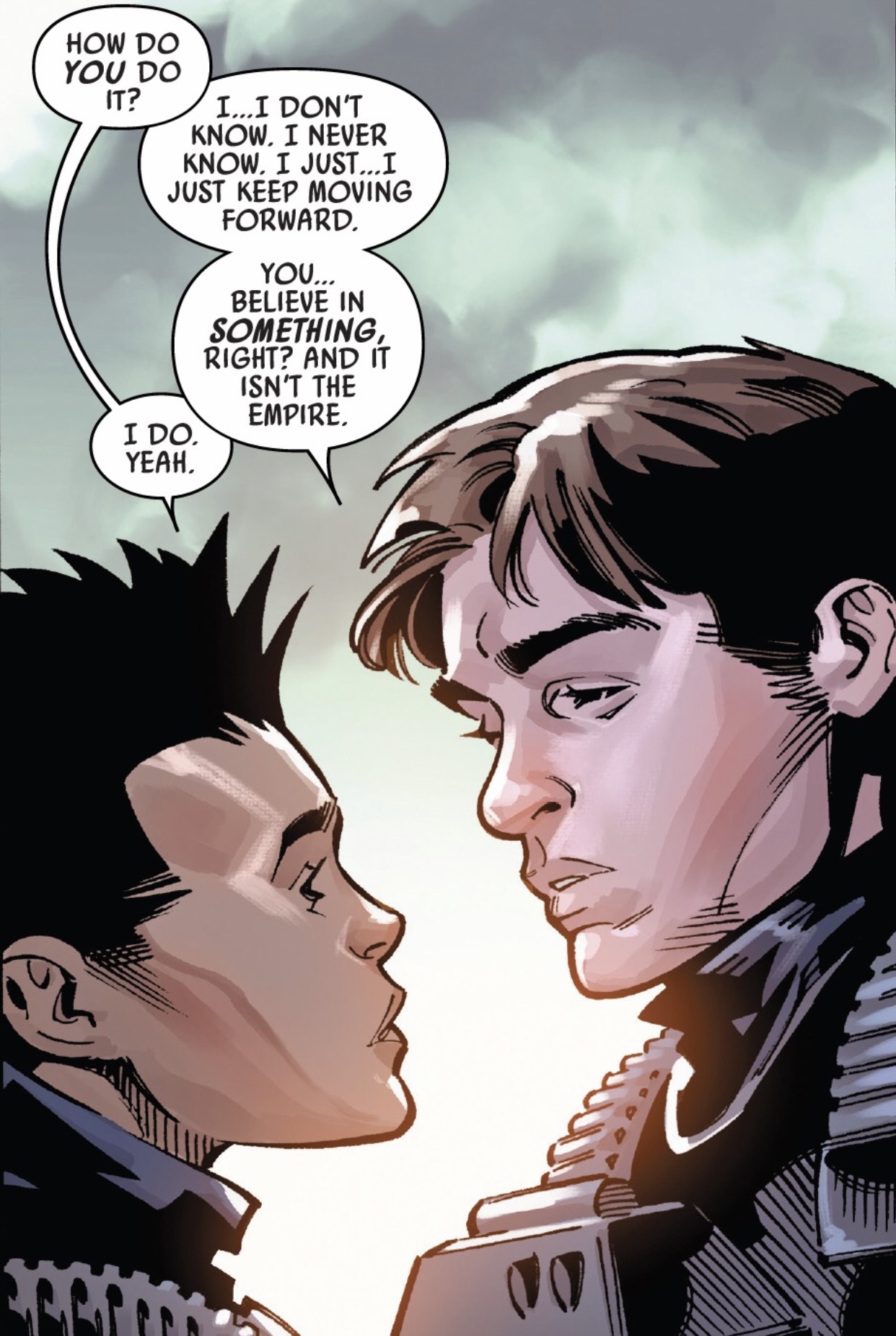 Han insists the Kanina leave and tells her he was going to try and escape himself. He tells her she should get out and that she doesn’t owe the Empire any more than what she’s given. The other cadets warn her that it could make her a target of the Empire, but Han still tells her to go. He believes in Kanina and shows that he’s always been the good guy who does the right thing. It’s a good moment between them and makes Han’s tough act seem even more obvious. There’s risk he’s taking, but it’s worth it to him if he can help his friend. Kanina takes a risk of her own and she’s definitely become my favorite of the series. 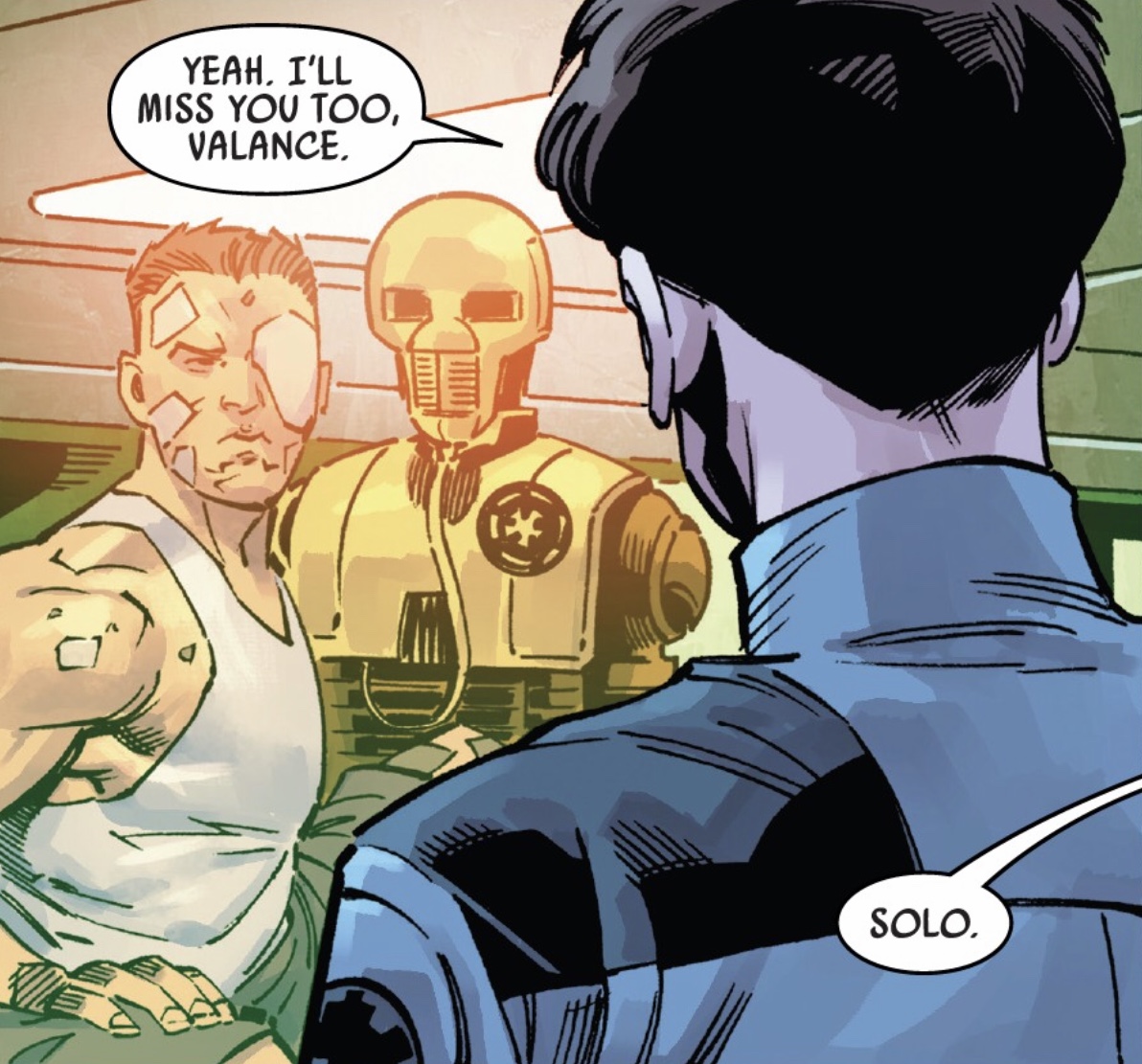 The cadets survive the TIE Bomber run, which is pretty spectacular to watch. Back at the infirmary, we find out that the Empire doesn’t offer anything other than basic medical care for their soldiers. Valance is going to have to pay for his own prosthetics if he wants them, so he’s not very happy, but remains loyal to the Empire. In case you missed it, Valance is based on a Legends character from a much earlier era of comics, whose disfigurements matched these injuries. It’s cool to see Robbie Thompson and the art team give a shoutout to Legends. Tamu and Lyttan are off to join the Medical Corp, while Solo’s fate is much worse, as he’s sent to the stockades, and then to a planet that appears to be Mimban. Instructor Nakan scolds Han and reminds him that the Empire doesn’t need heroes. 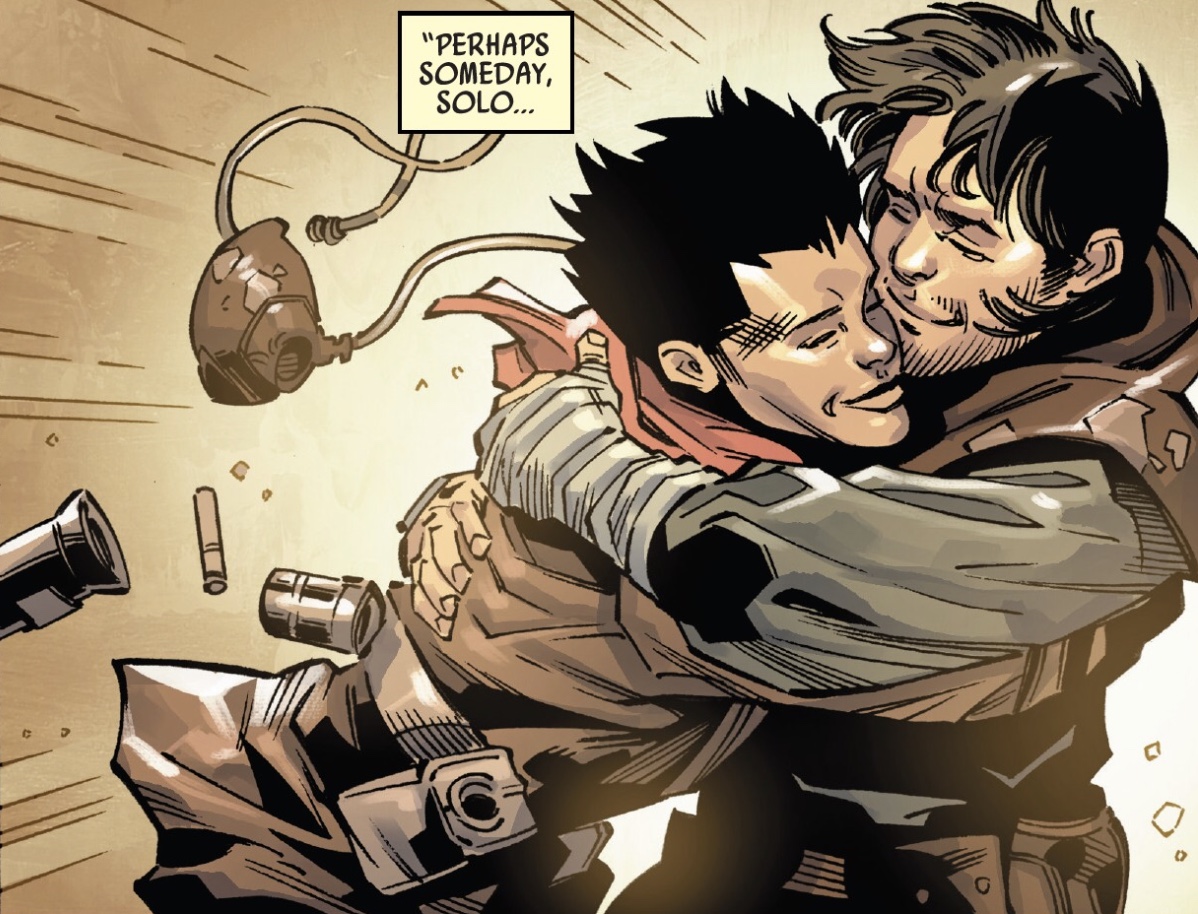 Han arrives at his new post to see a familiar face – Kanina!

Han Solo continues to be on a hot streak in stories that center around his formative years. It’s interesting to see him one last time before he enters the underworld of the galaxy to exist as a smuggler. Once again, Robbie Thompson’s writing is on point with Imperial Cadet, especially his handle on Han and the other characters. I can hear a mixture of Ford and Ahldenreich’s voices in my head as I read each word. The last page of this issue suggests there may be more on the way in the future, obviously at another point in Han’s life, but let’s have that series, please. There were so many doors left open to Han’s life at this age, I’d love to see Thompson or another writer tackle them. As mentioned earlier, the art is great and it’s by quite an ensemble: penciler Leonard Kirk; inkers Daniele Orlandini & Cory Hamscher; and colorist Arif Prianto. This issue and the whole of Han Solo: Imperial Cadet would make a fine addition to your reading queue and your comic book collection.