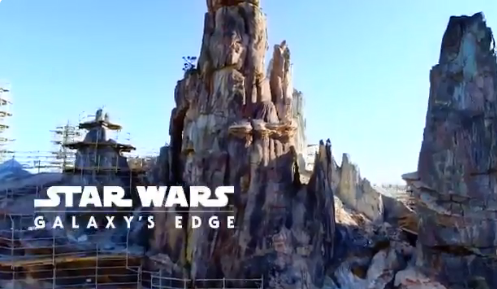 Star Wars: Galaxy’s Edge is getting a preview at Disney’s annual Christmas parade on ABC, seemingly solving a mystery that a few people in the Star Wars fan community have heard about.

Recently, ABC confirmed that Star Wars: Galaxy’s Edge would have a presence in their big Christmas extravaganza that doubles as a preview for a lot of Disney’s content hitting in 2019. You can see this in a promotional TV spot revealing this information below:

Don't miss the magical Christmas tradition you love, plus a sneak peek at Star Wars: Galaxy's Edge, coming in 2019 to @Disneyland and @WaltDisneyWorld. The Disney Parks Magical Christmas Day Parade, 12/25 on ABC! pic.twitter.com/PvsZTdLvD3

Making Star Wars recently posted hearing about a segment filmed at Disney World teasing a preview of a galaxy far, far away. At the time, some fans speculated this might have to do with rumors that a teaser for Star Wars Episode IX may be coming, which have been circulating for weeks now. There was a distinct possibility that the segment would have to do with the theme park over a movie. It looks like that will end up being the case.

While this doesn’t put an end to speculation that we could get a Star Wars: Episode IX preview of some kind before year’s end – it does dash fans hopes a bit. We’ve chosen to remain mildly skeptical about the rumors, even though we’re still hopeful that something might still happen; historically the chances of actual footage from the film are pretty low, but the door may still be open for some kind of behind-the-scenes look at the making of the closing chapter in the Skywalker saga.

Star Wars: Galaxy’s Edge is set to open at Disneyland in summer 2019 and Disney World in fall 2019. Star Wars: Episode IX will be released in the United States on December 20, 2019.