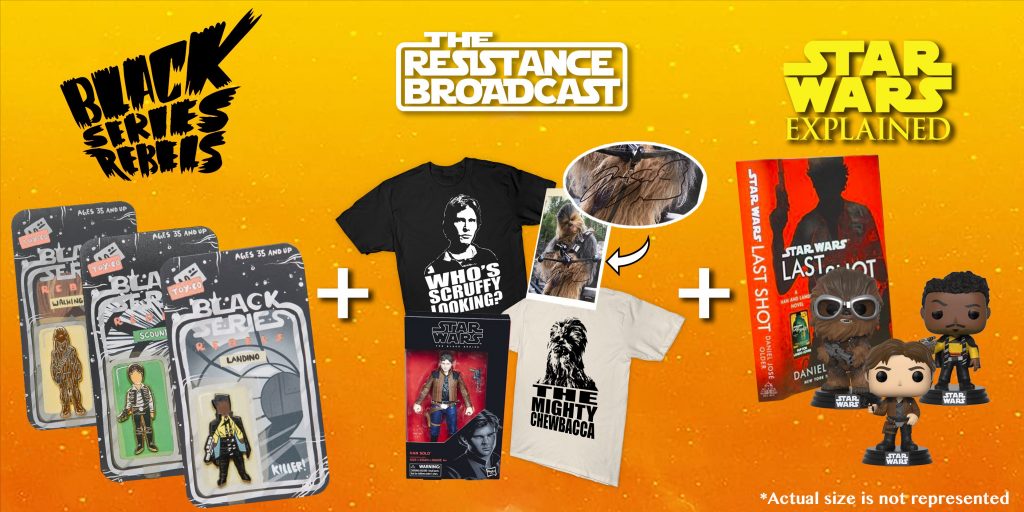 The #SoloChallenge is here! Our podcast The Resistance Broadcast has put on a Solo: A Star Wars Story guessing challenge prize package contest with friends Star Wars Explained and Black Series Rebels! See how to enter below!

To enter the Solo Challenge simply click HERE and guess what you think will happen in Solo: A Star Wars Story! The contest is WINNER TAKE ALL!!! The highest score will win the following prizes:

From The Resistance Broadcast

NOTE: In the event of a tie, we will literally roll the dice in Han Solo fashion on our episode following the release of Solo: A Star Wars Story to determine a single winner on the show!

Be sure to listen to The Resistance Broadcast‘s episode AFTER Solo hits theaters to find out if you won! So make sure you are subscribed on iTunes, Soundcloud, and YouTube and follow us on Twitter at @RBatSWNN and Instagram.

Many of you already do but be sure to subscribe and start watching videos weekly from Star Wars Explained and Black Series Rebels.

We want to thank our friends Alex and Mollie Damon from Star Wars Explained and the Black Series Rebels Alex Backes, Stephen Ellis, and Francisco Uranga for joining us in presenting this challenge to all of you! They are as great of people as they are Star Wars content creators!

We know better than to tell you the odds so we’ll simply just say: