The Mysterious Cobb Vanth: Precurser To a Post-Return of the Jedi Boba Fett Film?

In Chuck Wendig’s Aftermath trilogy, it’s very much out with the old and in with the new. As he paints the picture of what the galaxy looks like after the death of Emperor Palpatine, we begin to see some really interesting things begin to take shape in all the various corners of the galaxy. The status quo has shifted and vacant positions of power are slowly being filled.  In one of the interludes that he uses to break up the main narrative, Wendig focuses on Tatooine and the vaccum of power that exists following the death of the notorious crimelord Jabba the Hutt.

After Jabba’s death, a criminal organization known as the Red Key Raiders moved in on Jabba’s former turf and began a takeover of his criminal empire on Tatooine. Meanwhile, a mysterious man known as Cobb Vanth had acquired an old suit of Mandalorian armor from a group of Jawas and set himself up as the de facto law enforcement on Tatooine, taking the fight to the Red Key crime syndicate.

Although never explicitly stated, it is quite clear that this armor is none other than that of Boba Fett, leading many readers to believe that this mysterious Cobb Vanth is actually the old bounty hunter himself now going by an alias. However, it is revealed in Empire’s End that Vanth was formerly a slave on Tatooine, who along with many others,  became a free man after Jabba’s death. Vanth, along with Jabba’s former beastmaster Malakili, stages an uprising against the Red Key Raiders.

Vanth has also succeeded in forming an alliance with the Tusken Raiders as well by gifting them with a pearl from a krayt dragon’s belly. They also resent the Red Key Raiders for setting up camp on a sight that is sacred to their people, and they have a great deal of respect for Vanth, as it is revealed that he is raising a Huttlet named Borgo.

“I find it strange that you thought your ploy could work.  I mean, really.  Just because you have a Hutt-slug doesn’t mean you can install it on the dais and control Tatooine.” – Lorgan Movellan of the Red Key Raiders to Cobb Vanth

With all of this now revealed, Wendig still remains cryptic about who exactly Cobb Vanth is, as well as the true motivations behind his actions. He vies for freedom, but the reasoning behind his methods doesn’t quite add up just yet, and while he may actually be Boba Fett in disguise, the characters in the book seem to doubt as much:

“You don’t deserve that armor…Is it even real Mandalorian armor? Looks like something hammered out on a swindler’s forge. Besides…wearing a strong man’s armor doesn’t change how weak you are. Take his helmet off.” – Lorgan Movellan to Vanth

While it was neat to read about what took place on Tatooine after Return of the Jedi, one glaring bantha is still sitting conspicuously in the middle of the room: What happened to Boba Fett?  The fact that so much emphasis was placed on Fett’s armor and Vanth’s ambiguous identity without answering any real questions leads me to believe that the Lucasfilm Story Group has something else in the works for the fan-favorite character.

In Life Debt, it is revealed that the Sarlaac was injured by raining debris from the explosion of Jabba’s sail barge and partially exposed from the sliding sands as a result. Malakili took note that the stoma-tubes had been split open and that industrious Jawas had pillaged its digesting innards. Skeletons were found as well, but unless Jabba was greatly exagerrating about the thousand year digestive cycle of the Sarlaac, I think we have to assume that Boba Fett made it out of there alive and has left behind his iconic armor to move on to new adventures elsewhere.

Maybe it was Fett himself that cut open the creature from the inside to make his escape, but the details remain unclear and ambiguous. Regardless of what happened to Fett, it has already been hinted at by the folks at Lucasfilm that Fett survived Return of the Jedi, and we know that a Boba Fett film was in the works up until it was abandoned in favor of moving forward with the Han Solo film following the departure of director Josh Trank.

With the intrigue surrounding the Boba Fett persona in the wake of the Aftermath trilogy, I have to wonder if that idea is not back on the table now. While a young Boba Fett story is definitely not out of the question, I tend to lean toward a post-Return of the Jedi adventure with the bounty hunter, given the mystery generated by the Aftermath interludes. The fact that a young Boba Fett has already appeared in the prequels and The Clone Wars, and has been rumored to feature on Rebels as well, also leads me to favor the idea of a true sequel to Fett’s seemingly untimely end at Jabba’s sail barge on Tatooine rather than a tale of his origins as the most feared bounty hunter in the galaxy. 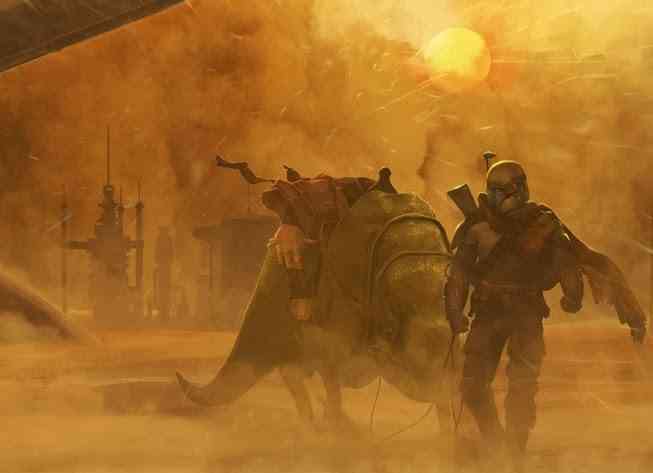 This is all just speculation of course, but with what we know already and with the mystery perpetuated by Wendig in his trilogy surrounding the character, I have to wonder if this isn’t something that’s on the near horizon.  I fully expect, along with the glorious teaser for The Last Jedi, that Lucasfilm will announce the next project to follow the Han Solo film at Star Wars Celebration Orlando this April.  While they may have decided to go a completely different route with Boba Fett, I think there is definitely a story to be told here.  It might come in the form of a future novel or a limited comic series instead, but don’t rule out the possibility of a Fett feature.

What do you think?  Is a Boba Fett movie still on the horizon?  Should it expain his origins or should it follow his escape from the Sarlaac?  Share your thoughts in the comments below.