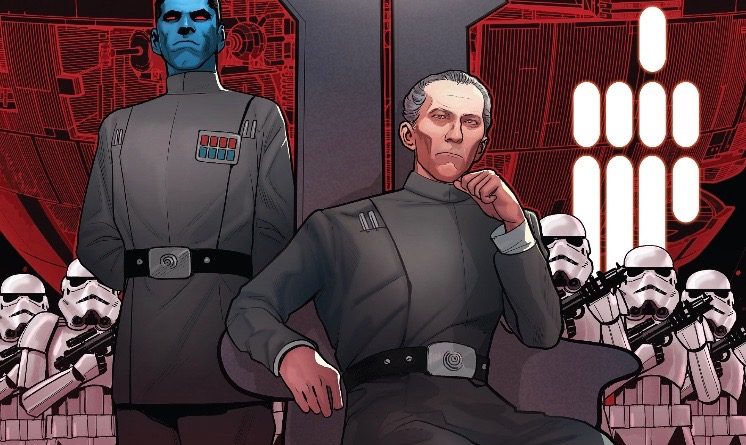 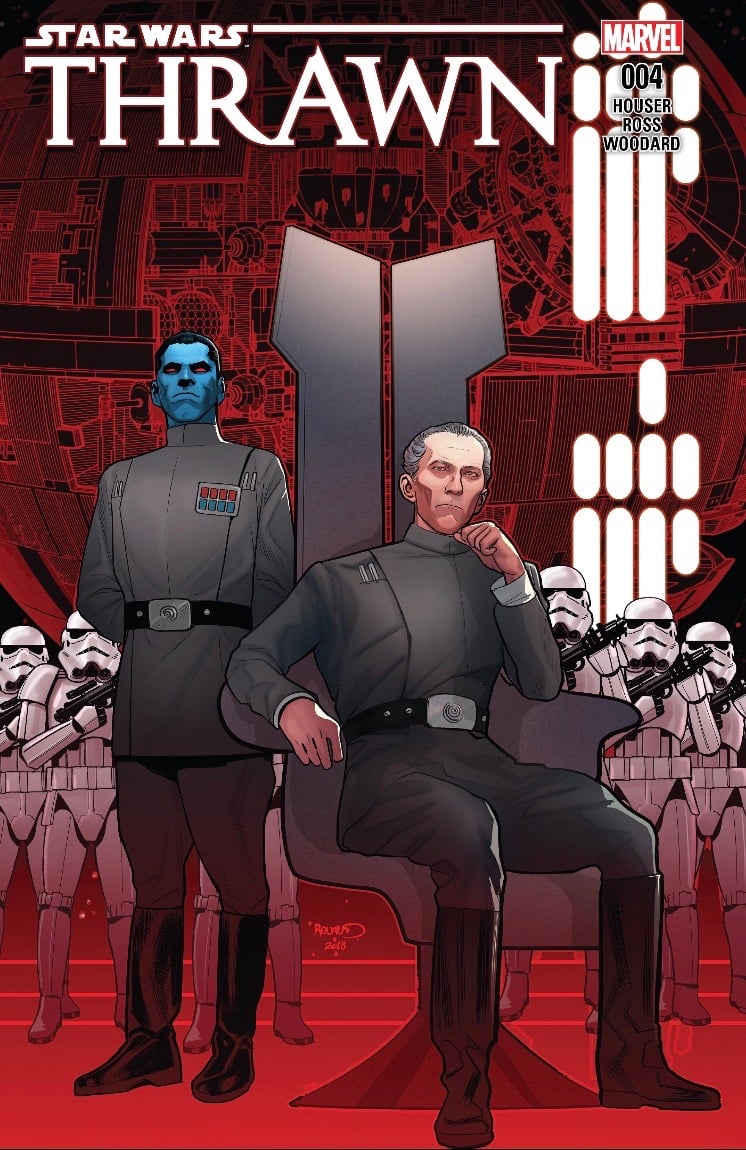 The ladder of Imperial hierarchy is one we’ve watched Thrawn climb at an impressive rate. If there’s anything consistent about Thrawn, it’s his ability to surprise his peers and commanders, while succeeding in tasks that prove his quality in the Empire. Now, those who’ve been along for the ride may finally see their rewards, too. 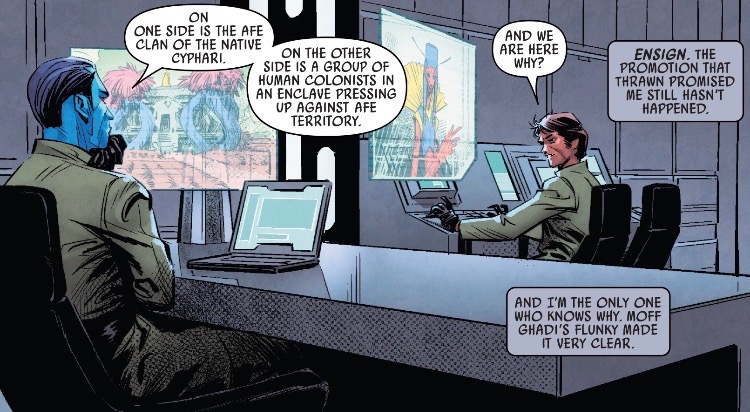 Ensign Vanto has been with Thrawn since the Empire encountered the mysterious being. Since that moment, he’s served at Thrawn’s side, watching him climb the Imperial ranks. Like most Imperial officers, Vanto is mystified how Thrawn continues to earn promotion-after-promotion, while he can’t seem to make it past the rank of ensign. Vanto is frustrated by this, as he never really wanted to be a military officer, but now that he is he feels stuck. Thrawn continues to promise that Vanto’s role in his successes will pay off, but the self-doubt and frustration are starting to take over. In the midst of this unspoken tension, they’ve arrived at the planet Cyphar to investigate a land dispute. 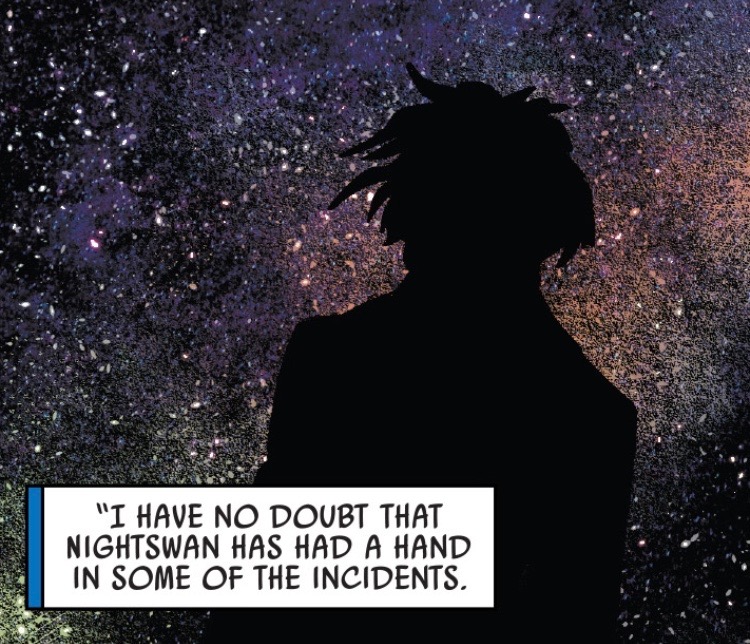 Thrawn has taken an interest in this dispute because he believes the insurgent Nightswan is behind the conflict. Thrawn has noticed a disturbing pattern of unrest in the Empire around resources – especially doonium – and he believes the elusive smuggler is behind it. The land dispute is between an indigenous species – the Afe tribe – and a group of human settlers Thrawn believes have discovered a doonium ore vein and are trying to smuggle it off the planet. There’s another element Thrawn recognizes, that this may be a trap for the Empire set by Nightswan. To whatever end, Thrawn feels his intellect challenged and he can’t resist setting the elaborate plan in motion. 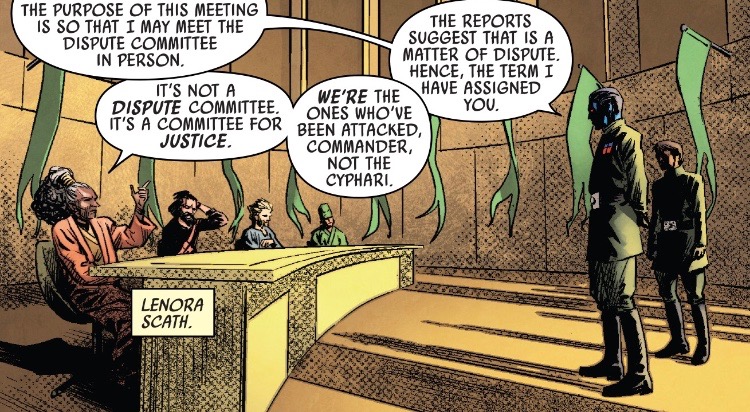 It doesn’t take long for Thrawn to suspect all of these people on the human settlers council. As an alien himself, Thrawn can’t accept their simplistic explanations as to why the humans and Afe have clashed. They don’t seem too happy that he’s there to investigate both sides of the dispute, as they seem to have been counting on swift Imperial intervention on their behalf. Thrawn suspects the conspirators to dupe the locals and the Empire are the entire council. He and Vanto head to the Afe tribe to hear their side of it and try to ascertain exactly what Nightswan’s endgame on Cyphar is.

There is a whole lot the council has kept from him. The Afe tell a side of the story that portrays attacks and raids on their people. Thrawn examines their land and tries to understand what the humans might be after, since all he can see on the land is unremarkable grain. He urges the Afe chief to lead his people off the land for the evening so he and Vanto can have a stakeout and try to unmask the culprits behind the raids. At this point, Thrawn is more concerned with those who would stir unrest that could spill into something bigger, rather than this seemingly petty squabble. Thrawn is thinking big picture in unmasking this conspiracy, to see how deep into the galactic core it may go. 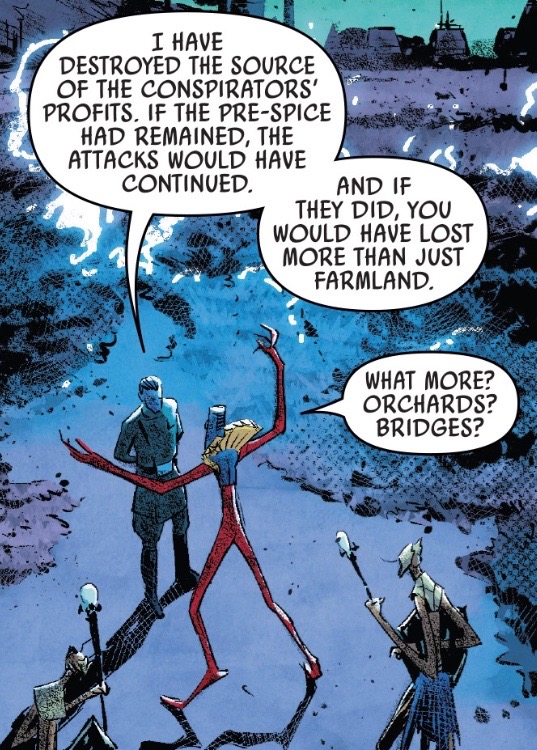 The conspiracy turns out to be on a much more petty level than Thrawn assumed. It was lead by a council member who was only interested in robbing the grain to produce illegal narcotic spice. Thrawn and Vanto figure this out as they watch the horde of bandits approach, with Thrawn discovering the council member has education in organic chemistry giving him the ability to transform the grain into spice. Thrawn and Vanto reveal themselves and stun the group as their backup of reinforcements arrives to apprehend the bandits. Thrawn’s ultimate solution is to torch the field of grain, which decimates the food supply for the Afe tribe. This isn’t something Thrawn does out of malice, he believes he’s protecting the Empire’s interest by keeping a potential trove of illegal spice off the market. The Afe vows to bring attention to this extreme solution, but Thrawn merely shrugs his shoulders and heads back to Coruscant. Vanto notes that Thrawn’s methods are extremely outside the typical Imperial procedures and expects some sort of reprimand. 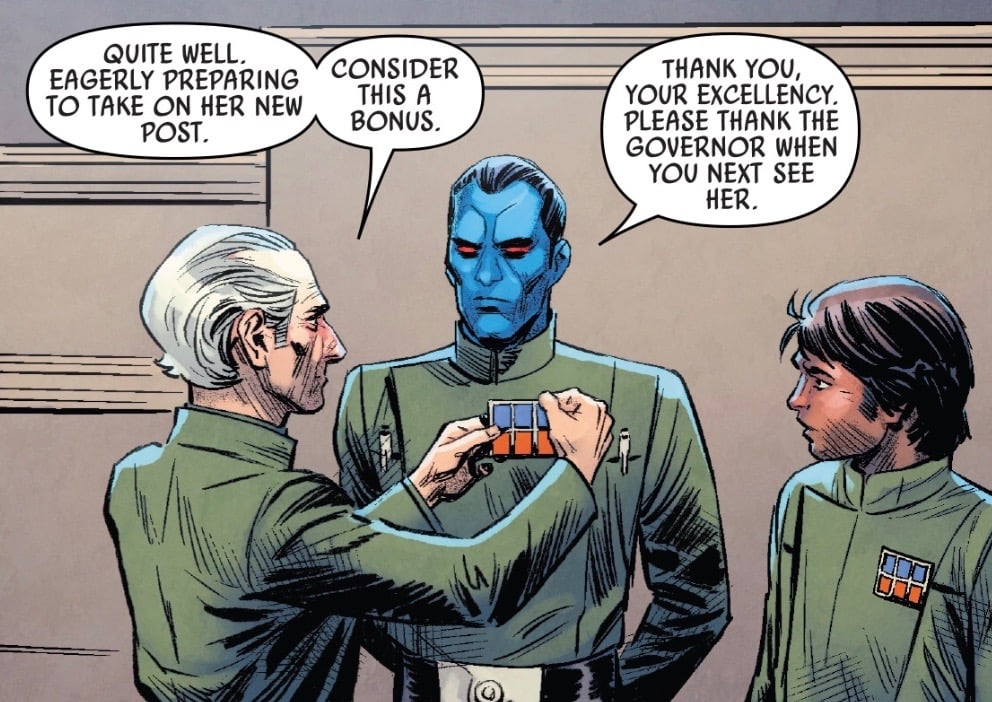 Well, it wouldn’t be a proper return to Coruscant without a promotion for Thrawn. Thrawn climbs up another step to the rank of commodore, and Vanto finally gets a promotion of his own. His loyalty and friendship to Thrawn has finally paid off – he skips the other ranks and moves right up to lieutenant-commander. It’s not really a Thrawn promotion unless Grand Moff Tarkin is there to pin your new rank insignia on your uniform. In both the novel and this adaptation, the relationship between Tarkin and Thrawn is still quite surface and pleasant, but as the canon continues to expand, I’m hoping we get to see more of their dynamic. The upcoming novel this summer promises more Vader and Thrawn face time, but I’m hoping we get some Tarkin in there, too. Not only do Thrawn and Vanto get fancy new ranks, they get themselves a star destroyer. 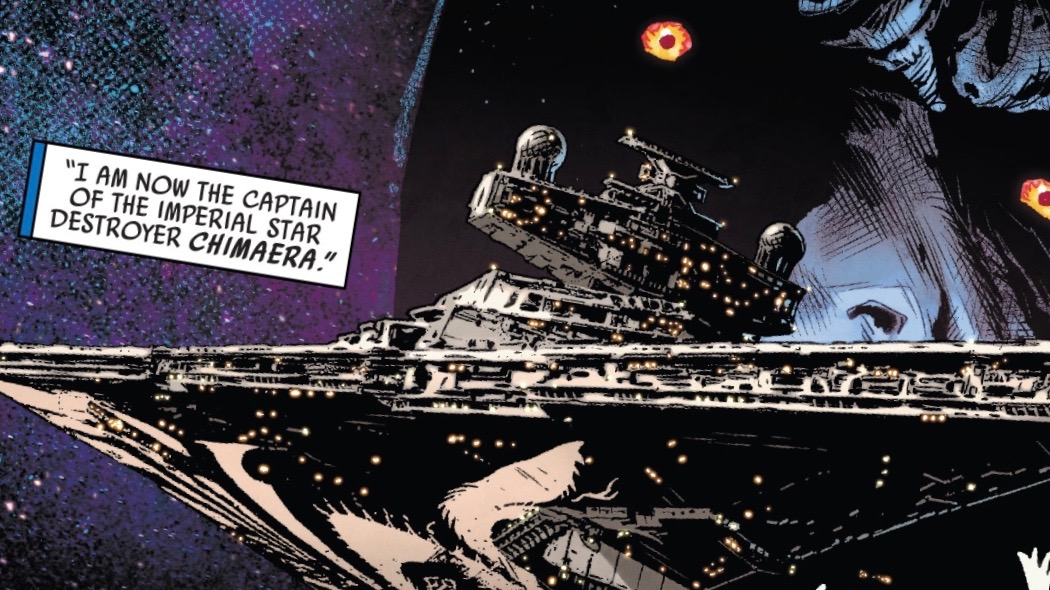 The art in this issue by artist Luke Ross and colorist Nolan Woodward is really nice. The art really helps move the passage of time in the story along, as we see the Chimera dispatched across the galaxy to suppress and carry out the Empire’s will. After the impressive montage – ending with Thrawn’s promotion to admiral – we join him in a meeting of regional governors, lead by Colonel Yularen of the Imperial Security Bureau. The governors are concerned about uprisings around the galaxy. Pryce is there, but they mention Lothal is being dealt with, so I’m not sure how close to the first season of Rebels we are getting. Keep in mind, the Rebel Alliance does not yet exist. At this point, the uprisings are locally based as Mon Mothma and Bail Organa have yet to unify them, so we’re seeing the Empire take some concern. Admiral Thrawn is tasked with freeing a recently occupied Imperial facility on the planet of Batonn. The regional governor is pretty hasty in his desire to see the occupation ended – even if that means destroying the facility. Colonel Yularen and the rest of the Imperial command represented seem to think they should either send in a swarm of stormtroopers or blast the facility with no concern for the hostages. Thrawn is interested in precision and salvaging the facility, and to some degree, saving the hostages. The room turns against him pretty quick and Vanto warns Thrawn that he may be destroying whatever clout he has among the brass. Because of Thrawn’s defiance, he’s ordered to deal with a different insurgency, causing Thrawn to wonder why everyone in the room is so quick to destroy this occupied facility. 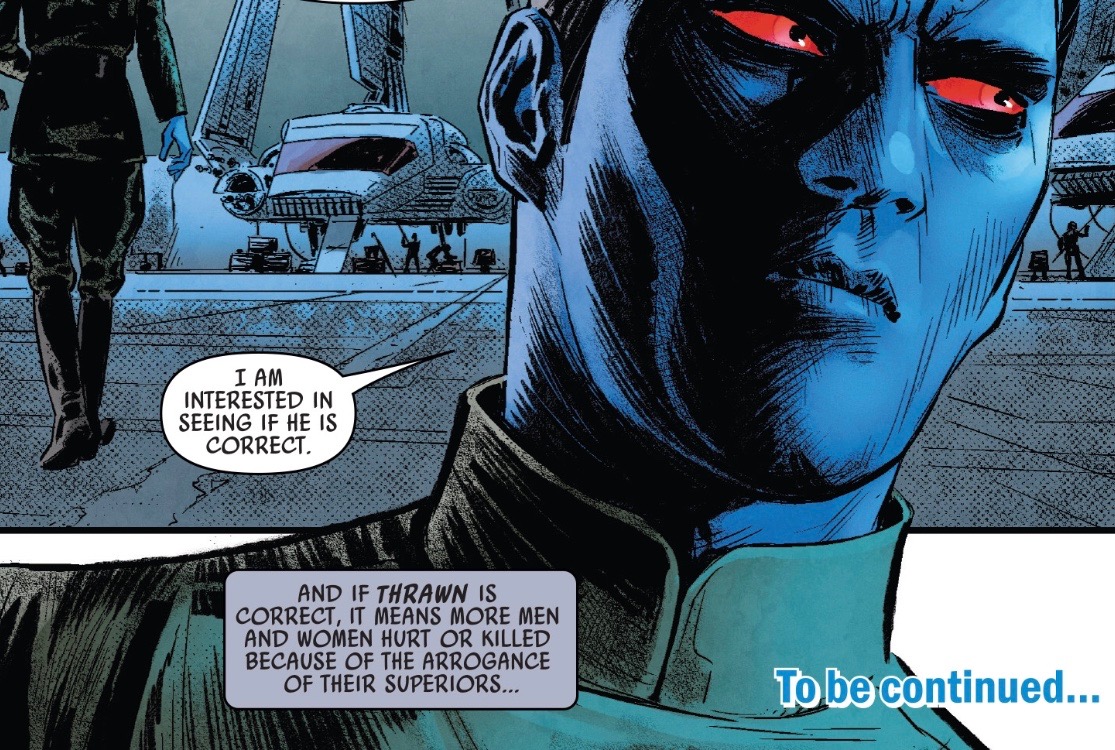 Thrawn has plans of his own, as always. What appears on the surface to be a defiant decision is a calculated one to test a fellow officer who could either be his adversary or a liability to the Empire. Thrawn decides to send the Chimera to deal with an insurgency on a different planet, while he and Vanto take a smaller ship to investigate the siege the Imperial commanders want a swift and broad solution to. It should be interesting to see what they discover.

This adaptation of Timothy Zahn’s novel continues to move along at an impressive pace. Writer Jody Houser continues to impress with her skills at condensing one of the densest Star Wars novels out there into the comic form. If you have read the book, you’re likely as happy with her take on this as I’ve been. The essence of Thrawn’s story is still here and she’s also managed to capture many of the deviating and peripheral storylines that pop-up in the novel. As mentioned earlier, the collaboration of Houser’s writing and the aristic team of Ross and Woodward is giving comic fans a real treat. This is just as immersive way to experience Thrawn’s rise to grand admiral as any, and seeing this story come to life on the pages has been a real pleasure. 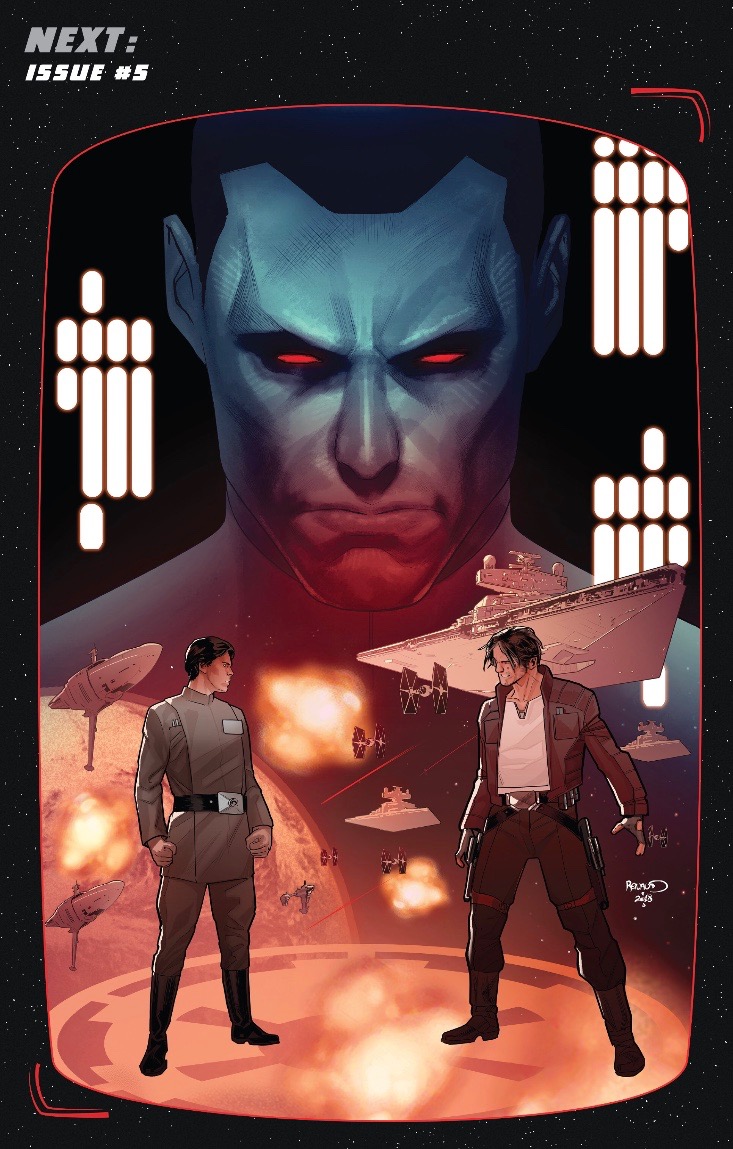 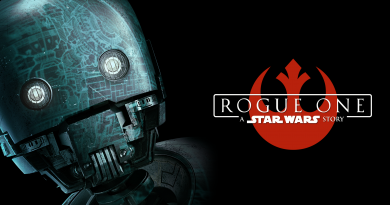 Alan Tudyk Says K-2SO Won’t Be In ‘Andor’ Season One, But There Are Plans For The Character 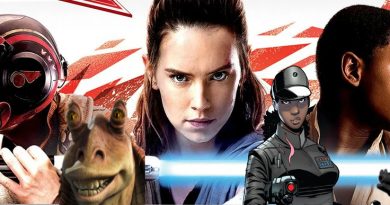 The Resistance Broadcast – Episode 57 – Weesa Back!!! 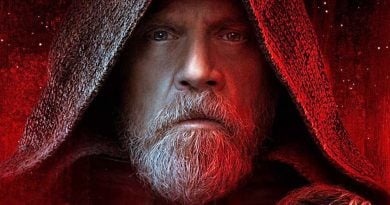